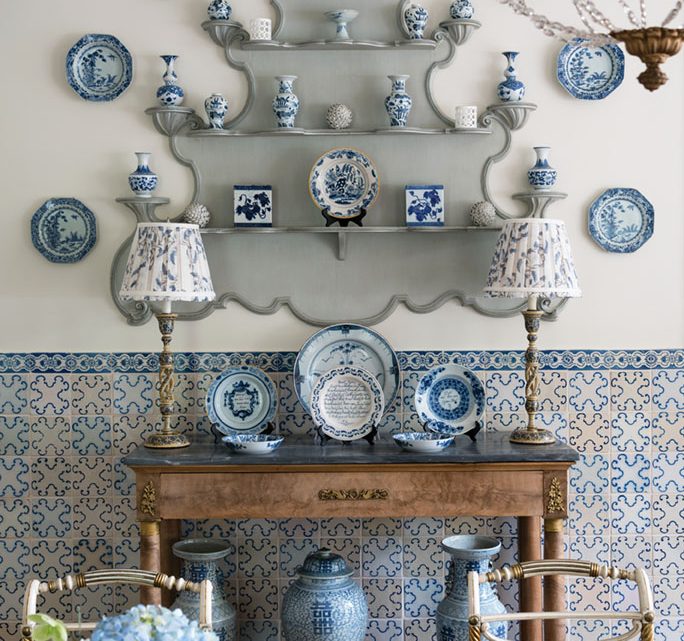 To view the gallery of blue-and-white decor, click the arrows or swipe if on a mobile device.

In a New York apartment, interior designer Ashley Whittaker adorned the master bedroom walls with a custom-colored Bennison fabric. “The delicate pattern on the walls contrasts with the larger pattern on the canopy,” she says of the room's blue-and-white decor, which she accented with soft pink. Photo by Erick Piasecki
More on Ashley Whittaker

In a vignette so simple but so dreamy, Bunny Williams highlights a single blue-and-white plate among a collection of white ceramics, set against soft green eighteenth-century chinoiserie wallpaper found at auction. Photo from Williams' book Love Affairs with Houses (Abrams, 2019)

In the foyer of a historic Colonial home in Larchmont, New York, Cece Barfield Thompson placed a thrift store console in the posh company of Vaughan lamps and fine antiques, including a collection of large blue-and-white ginger jars underneath. Photo by Lesley Unruh

See next slide for another look from Thompson.

Delftware vessels overflow with delphiniums on a table nestled in the fields of the Wigchert family farm in the Netherlands. Floral designers Greg Campbell and Erick New of Garden District, based in Memphis, chose the vessels as a salute to 17th-century Dutch history, when the city of Delft was a major center of production of blue-and-white pottery. Photo by Sarah Bell of Sélavie Photography, from Campbell and New’s book Florists to the Field (Southerly Media, 2018)

Florida interior designer Lisa Peterson varies her style according to her clients’ desires. However, her shop, Pineapple, Palms, Etc., which she co-owns with sister Shelly Bascetta, conveys her preference for white, blues, and greens, as well as wicker and rattan, stripes, and bold, colorful art and pillows. She believes a room is successful when “you feel like yourself when you are in it. You can let out a big ahhh and sink into the environment." Photo by Carmel Brantley
More on Pineapple, Palms, Etc.

See next slide for more blue-and-white decor from Farmer.

In the same Alabama home, a screened porch epitomizes Southern style with a bed swing made in South Carolina and chairs from Georgia. James Farmer finished the look by layering blue-and-white textiles in an assortment geometric and organic patterns. Photo by Emily Followill
More on James Farmer

See next slide for the second look.

In the California home of designer Mark D. Sikes, a terrace becomes a natural extension of indoor spaces with its blue-and-white furnishings and accessories surrounded by ficus-covered walls. "The pairing of deep green with a lighter blue mirrors the naturally occurring contrast between plants and sky," he says in his book, Beautiful: All-American Decorating and Timeless Style (Rizzoli, 2016). Photo © Amy Neunsinger
More on Mark D. Sikes

At her former home, Bee Cottage in East Hampton, writer and tastemaker Frances Schultz created two distinct looks for blue-and-white decor in a bedroom. The first features sky-blue walls and cloud-white bedding trimmed in blue. A half-canopy camouflages the sloped ceiling while creating height and adding drama to the master bedroom. Photo by Tria Giovan

See next slide for the second look.

In the guest room, Frances Schultz enveloped the walls in Benjamin Moore’s Galapagos Turquoise in a high-gloss finish. “It reminds me of the ocean, waves and all, thanks to the bumpy old stucco walls,” she says. Photo by Tria Giovan
More on Frances Schultz

“One of my favorite color combinations is aqua with cobalt blue, and mixing them with the warmth of copper and wood makes the kitchen such a pretty room to sit in,” says interior designer Leta Austin Foster. For a dash of cobalt in the kitchen of an alpine-inspired Colorado home, she used blue-and-white tiles from Solar Antique Tiles. Photo by Fred Licht

Based in Oxfordshire, in England’s bucolic Cotswolds, floral stylist Willow Crossley is known for airy, unruly bouquets as well as her love of juxtaposing freshly cut stems with patterned walls and fabrics. Here, the reds, pinks, and yellows in a vibrant bunch of tulips pop against blue-and-white wallpaper and a matching cachepot. Photo by Emma Mitchell
More on Willow Crossley

In a Palm Beach living room, Marshall Watson used a palette of pale blues and creams to ground the many patterns in the fabrics, moldings, and marquetry occasional tables, as well as decorative elements of the sea, such as starfish, sand dollars, and coral. The Greek key motif, seen in the rug, lampshade, and pillows, is another unifying element, which links the rooms of the house. Photo by Max Kim-Bee from Watson's book, The Art of Elegance: Classic Interiors (Rizzoli New York, 2017)

See next slide for another look from Watson.

On the patio of the same home, Marshall Watson continued the blue-and-white theme, contrasting it with magenta bougainvillea. Long striped curtains bring a chic attitude to the outdoor living space. Photo by Max Kim-Bee
More on Marshall Watson

“I believe in making a room symmetrical, beautiful, and harmonious, and then throwing the boomerang in,” says Alabama designer Mary Evelyn McKee. That boomerang might come in the form of art, the inherent wildness of flowers—or perhaps a modern metallic lamp punctuating the serene blue-and-white decor of a master bedroom. Photo by Tria Giovan
More on Mary Evelyn McKee

At her California home nestled in a 30-acre lemon orchard, designer Jennifer Amodei chose blue-and-white decor for the outdoor sitting area, which she filled with furniture from Sunset West and pieces from her collection of blue-and-white porcelain. Photo by Todd Tyler

See next slide for another look from Amodei.

See next slide for another look from Hargrove.

In the master bath of the same home, France Hargrove extended the pale blue hue to the walls. Floral prints and a French mirror and commode give the bath a sense of luxury rather than utility. Photo by Emily Followill
More on Francie Hargrove

Founded by Americans Liza Serratore and Claire Russo in Shanghai after college, LuRu Home collaborates with Chinese artisans to create textile designs using an ancient dying technique known as Nankeen. Here, a collection of the line's blue-and-white patterns makes a statement in a courtyard garden in Suzhou, China. Photo courtesy of LuRu Home

Seattle shop owner Ted Kennedy Watson entertains and unwinds at his Vashon Island cabin with sunset-facing views and rustic charm. For a summer dinner with friends, he set the table with cobalt glassware and a mix of casual blue-and-white china. Photo by Claire Takacs
More on Ted Kennedy Watson

See next slide for more blue-and-white decor from Braff.

Airy white shiplap walls and a neutral rug balance the elaborate upholstered headboard, canopy, and valances in a blue-and-white bedroom designed by New York's Alexa Hampton, who followed in the footsteps of her legendary designer father, Mark Hampton. Photo by Steve Freihon

When jewelry designer Elizabeth Locke entertains at her 1816 Federal-style farmhouse in Virginia, she considers every last detail just as she does when designing her eponymous jewelry collection. For a ladies lunch, she dressed the porch in a blue-and-white scheme with exuberant tablecloths found in India, painted ballroom chairs, and her antique Minton china, monogrammed linens, and repoussé silver. Photo by Kip Dawkins

Next, visit the Blue-and-White Home of Designer Heather Chadduck Hillegas 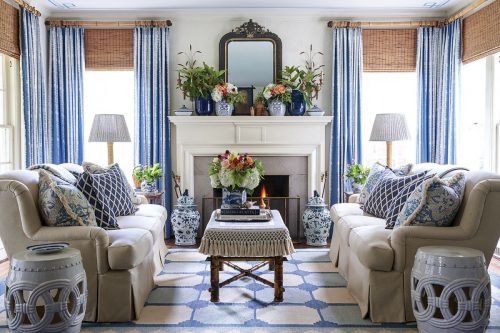