While designer Marshall Watson's vision varies depending on each client and the location of the project, his designs have a common thread—a beautiful conversation between the interiors and the spaces beyond 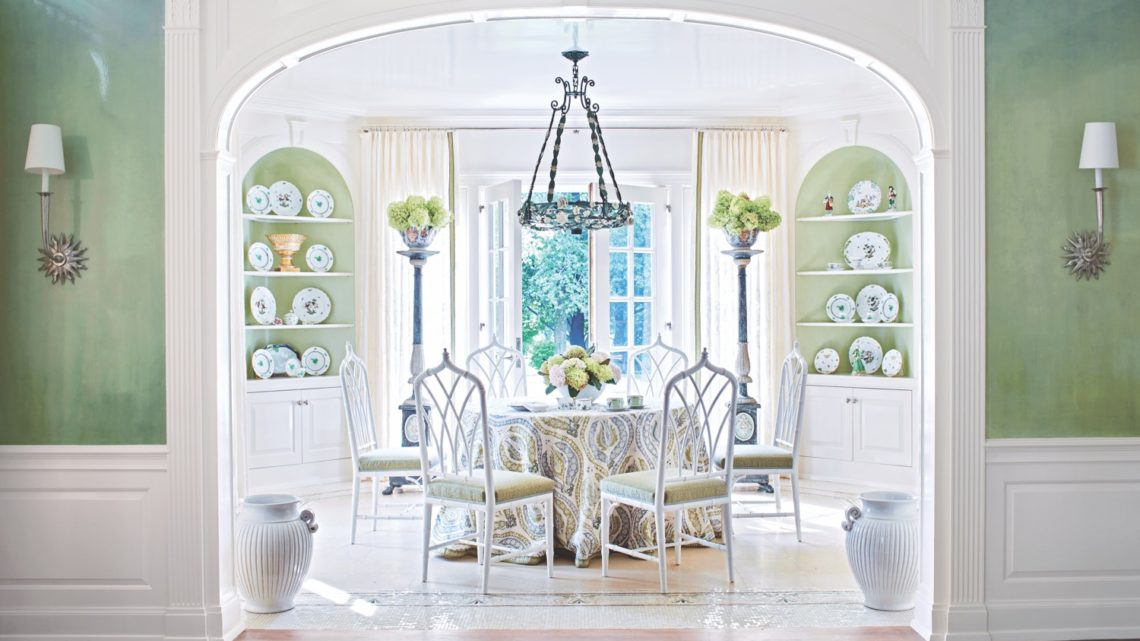 When New York-based designer Marshall Watson starts a new project, he does a curious thing—he absents himself. Not literally of course; you can still count on him to show up at the appointed hour, but at the end of the process, you won’t find a house with a “Marshall Watson interior” because the designer views himself “as a conduit for other people’s vision and aspirations.” Watson spends a large amount of time getting inside his clients’ heads, so to speak, which comes naturally for the designer because acting was one of his earlier career experiences. 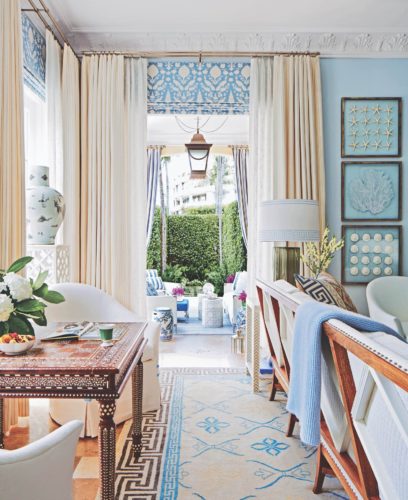 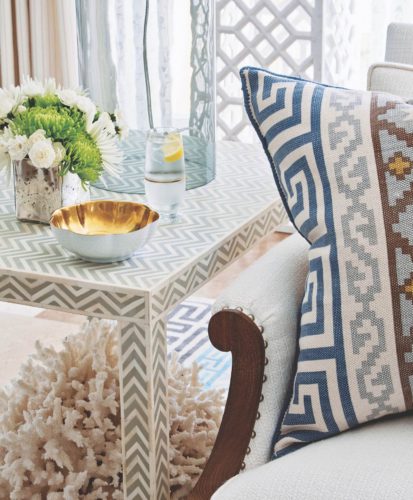 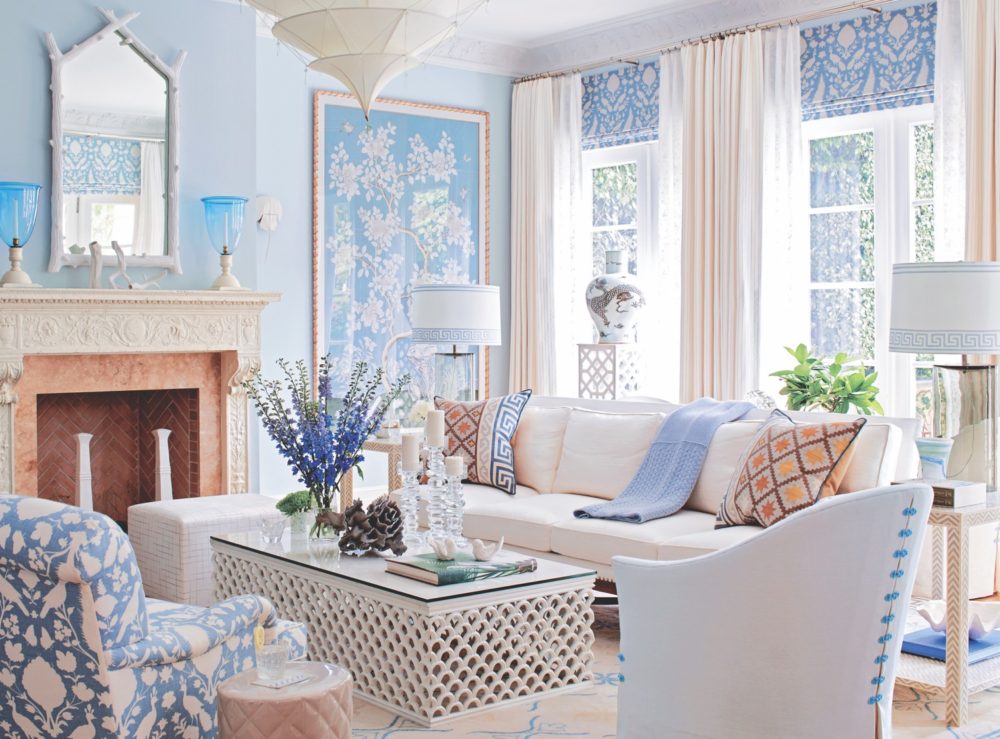 The living room in this Palm Beach home includes many patterns in the fabrics, moldings, marquetry occasional tables, and decorative elements of the sea, such as starfish, sand dollars, and coral, all grounded with a palette of pale blues and creams. The rooms are further linked with motifs such as the Greek key, which appears in the carpet border and lampshade. Photos by Max Kim-Bee

“I gravitated toward the character roles—I enjoyed losing myself and taking on another’s persona completely,” he explains. While he may not have an instantly recognizable aesthetic, he does have some design edicts he strives for—he mentions words such as “balance, proportion, livability, light, and warmth.” These “ fingerprints,” as he calls them, are seen throughout his work. They are perhaps best grouped under the umbrella of elegance— Watson’s favorite word to describe his 30 years as an interior designer; hence the title of his new book, The Art of Elegance (Rizzoli New York, 2017).

“I aspire to create homes that are uplifting as well as comfortable, graceful as well as high-functioning, coherent as well as appropriate. This is my pursuit of the art of elegance.” –MARSHALL WATSON 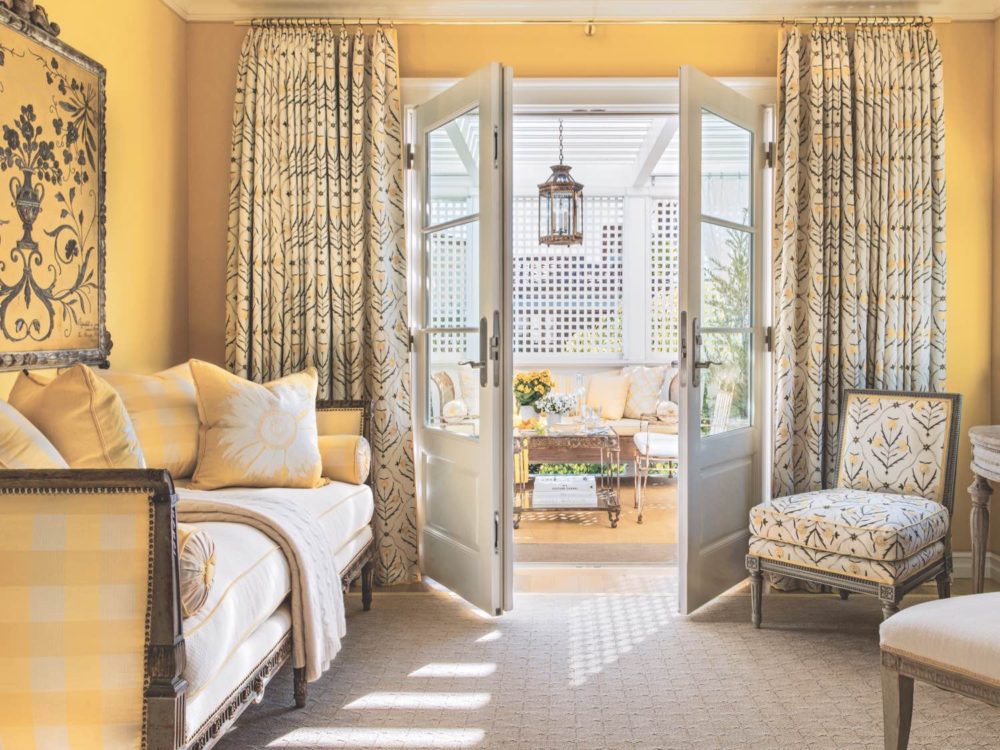 For this sunny room that opens to a veranda, Watson included luxurious embroidered curtains, silk-upholstered walls, and a French neoclassical daybed. Photo by Lisa Romerein

While doing a gentle psychoanalysis of his clients, Watson is also passionately considering the setting of each project, whether it’s a piece of property overlooking the Sea of Cortez in Mexico, an island in the Stockholm archipelago, a Bahamas getaway, or family homes in St. Louis, Salt Lake City, and New York. “It’s essential that the design be in harmony with the setting and that the indoor and outdoor spaces relate to each other,” says Watson, “and I usually do a layout of the garden when planning everything else.” 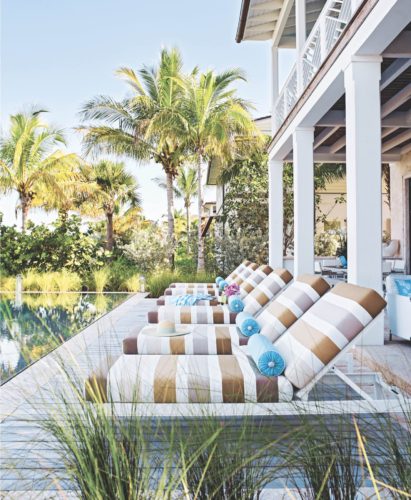 Watson chose a bold stripe for the outdoor chaises with a playful bright blue for the pillows. Photo by Francesco Lagnese 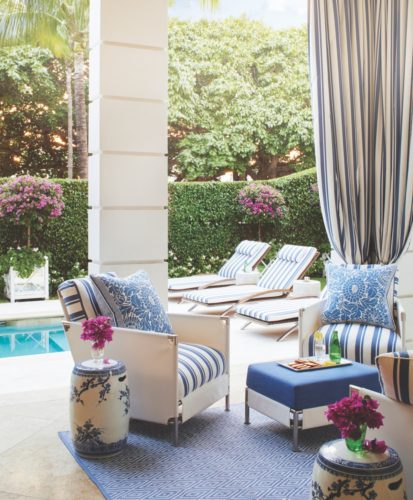 Long curtains and bougainvillea add color and bring a chic attitude to the back garden. Photo by Max Kim-Bee 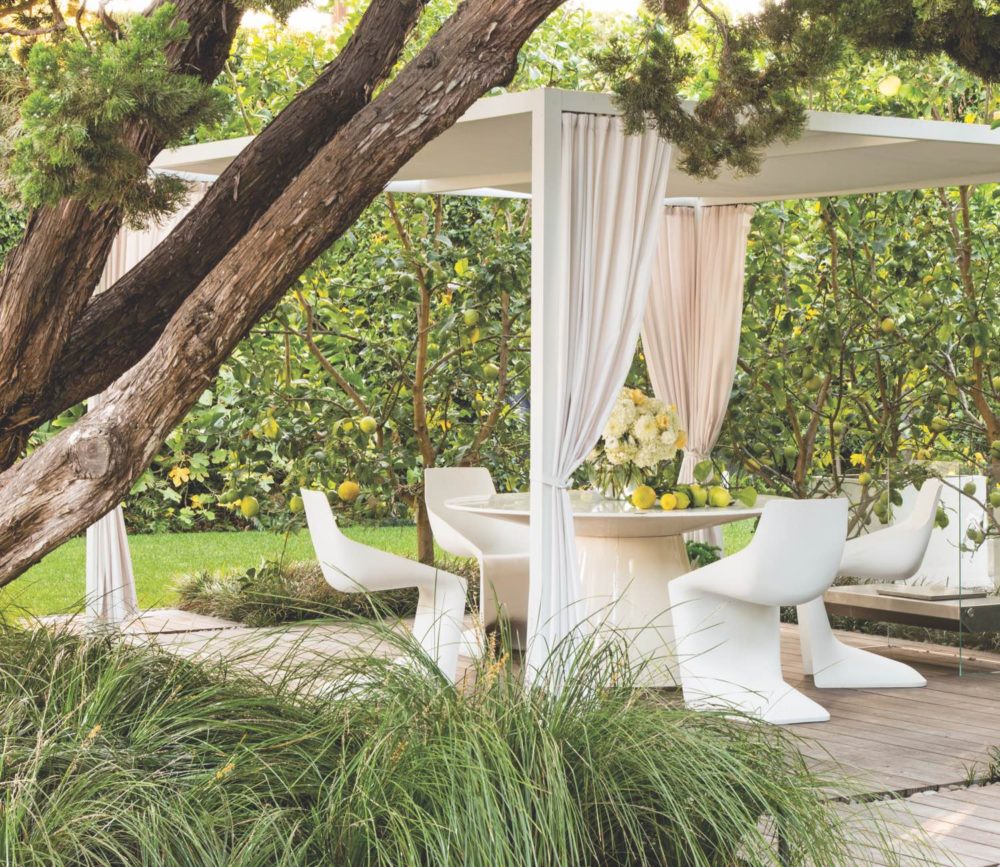 An outdoor space by designer Marshall Watson shows off the power of white.

While he’s quick to point out that he’s not a trained horticulturalist, his clients clearly forgive his lack of credentials as such because he understands the language. “When I think about integrating a home into the landscape,” Watson says, “I believe there’s a romantic quality about it as you move from the interiors to the outside rooms and gardens and even beyond the boundaries of the property to whatever views you see. I prefer things to be a little more formal right outside the door, then as you progress away from the house to get a little looser and wilder in stages.” He even delves into nitty-gritty choices of what plantings will best enhance the overall look. 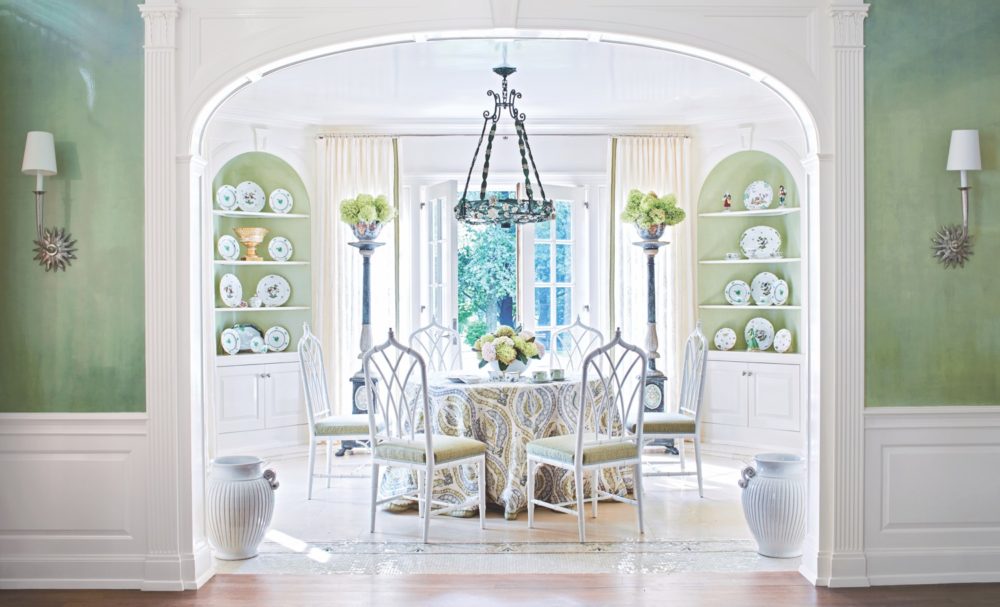 Watson gave the sunroom of a St. Louis home the air of a conservatory with a marble mosaic floor and late 19th-century plant stands with colorful cartouches. Photo Max Kim-Bee

His appreciation of the garden came a little later in life. Growing up in Kansas City, Missouri, Watson viewed being in the yard as a type of torture. “My brothers and I were in constant service to my father’s obsessions—a perfect green lawn, formal English gardens with 250 rose bushes, camellia trees, and an organic vegetable garden,” he recalls. “We were always pruning, weeding, and spraying, and we really resented it at the time.” Interestingly, all three boys have returned to their roots in their own way. Watson’s current passion came about when working at his home in East Hampton, which he purchased in 1999. “Now I truly like roses and grow them myself,” he says with a laugh. “But actually, my garden and gardening are essential to my life.” And his clients are the beneficiaries. 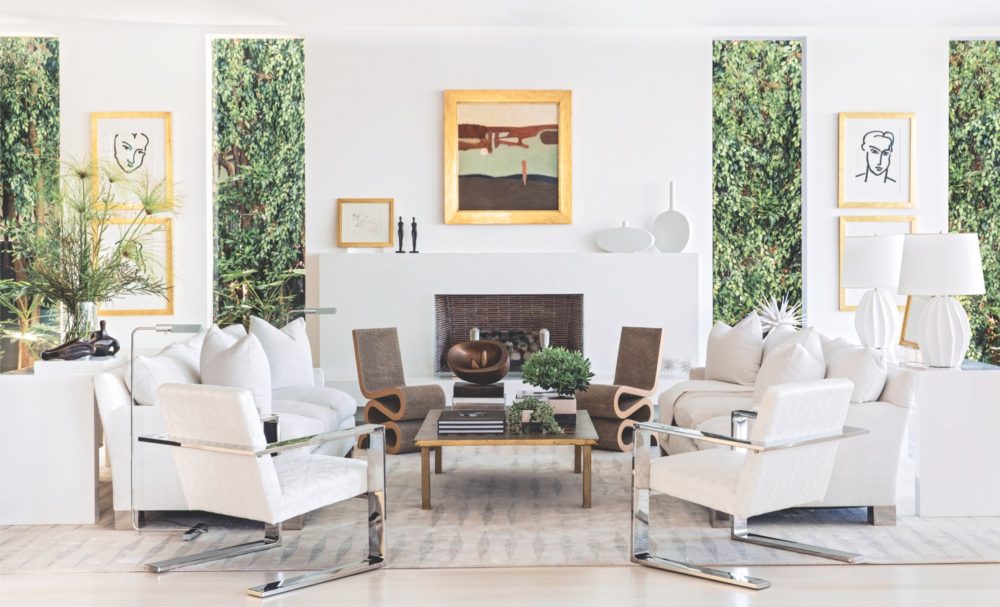 This pristine living room in California reveals treasures such as Matisse and Picasso drawings and Frank Gehry chairs. Photo by Lisa Romerein

“At every scale, it can be tempting to show off . However, while I do believe there can be a star in a room, the supporting players and chorus are equally important—what genuinely matters is the overall gestalt.” –MARSHALL WATSON

In the dining room of a Bahamas home, the designer used a series of spherical, rope-wrapped pendant fixtures that pair with the woven hemp chairs. Photo by Francesco Lagnese

Each bedroom In this family getaway house in the Bahamas has its own unique flavor. “The prevailing spirit is that of a beach shack made mature and muscular by a consistency of architectural and decorative elements,” says Watson. Photo by Francesco Lagnese

In this bedroom, Watson's tailored mix includes custom-embroidered fabrics on the pillows and headboard. Photo by David Duncan

“The casual air is slightly contravened by the formality of the floor and the robust classical casing surrounding the door,” says Watson about the great room in this poolside pavilion. Photo by Alise O'Brien

While designer Marshall Watson's vision varies depending on each client and the location of the project, his designs have a common thread—a beautiful conversation between the interiors and the spaces beyond. Photo by Max Kim-Bee 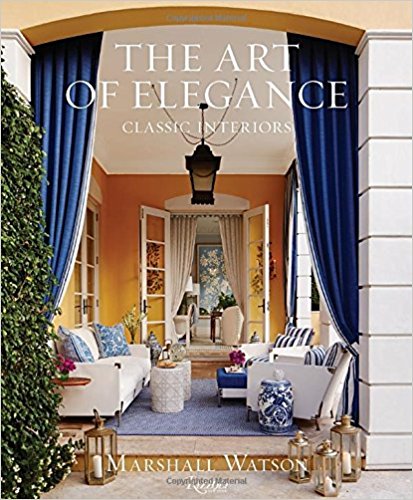