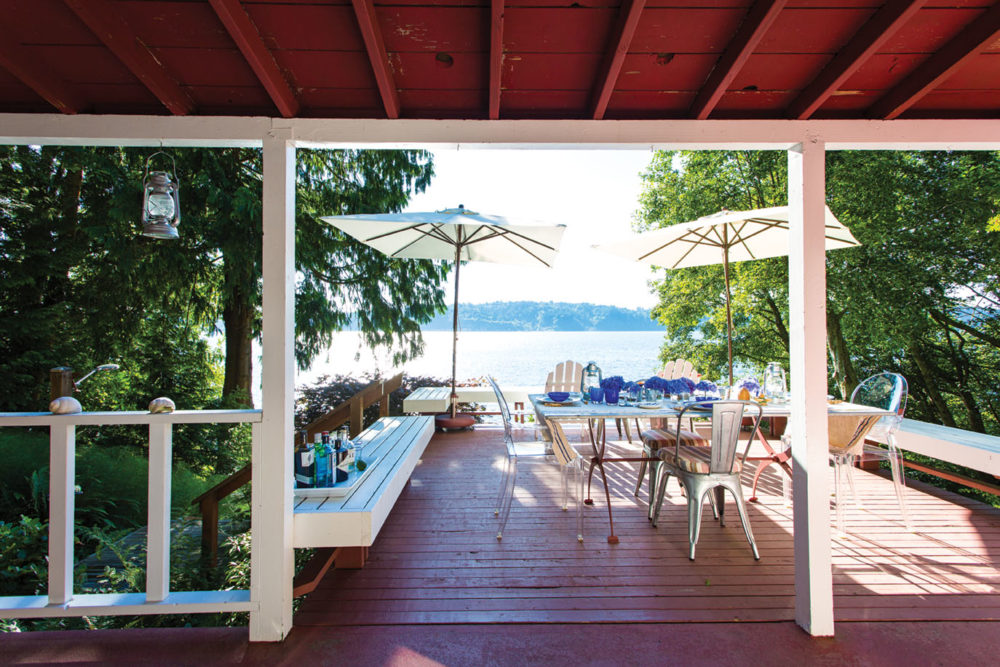 When tastemaker, blogger, and author Ted Kennedy Watson moved to the Pacific Northwest, first to college in Portland, Oregon, and later to Seattle, he was instantly enchanted by the dramatic scenery. After a childhood spent in Kansas City, he says the change of view had a profound influence. “Seattle is such an incredibly beautiful city,” he says. “Having grown up in the Midwest, it feels like an incredible luxury to live each day surrounded by water.”

In fact, he now spends weekends feet from the water, in a 1940 house on Vashon Island that he and Ted Sive bought from the former mayor of Seattle. Reached by descending eight flights of stairs, the house perches above Colvos Passage, with reflected light flickering on the ceiling and spectacular sunsets on offer most nights. In a practice Watson advocates, they named the house WestWard in reference to its sunset-facing views and the westward journey of its owners. With a bank of French doors opening the main room of the house to the deck, they frequently light a fire in the fireplace and fling the doors open to the scenery. The “two Teds,” as friends refer to them, set a zinc table out on the deck six months out of the year for daily dining and dinner parties. Watson is known for his inventive table settings, filling the table with his uncomplicated style of flower arrangements, intriguing objects, and a mix of tableware, primarily from the shops he owns in town, Watson Kennedy Fine Living and Watson Kennedy Fine Home.

Visitors have been flocking to Watson Kennedy Fine Living in Seattle’s Pike Place Market for 17 years to shop the just-right mix of treasures for the bed, bath, table, and home. The allure continues at its sister store, Watson Kennedy Fine Home, with an even larger selection of furnishings, one-of-a-kind finds, and little luxuries including botanically scented home fragrances and beauty products. From the framed artwork on the walls to the inventive vignettes that fill every corner, both shops are more than simple inventory—they are the expression of a particularly refined point of view, one that has been evolving Watson’s entire life.

“My earliest memories are of minute details—how a space looked, what it felt like in the room, and what the scent was,” he says. “My mom and my grandmother always kept immaculate homes, and beautiful things held great importance to them. My parents were so supportive of me in my creative endeavors. I used to change my room around monthly.”

That exacting eye for detail is evident in Watson’s writing, both in his book—Style & Simplicity: An A to Z Guide to Living a More Beautiful Life (Sterling Signature, 2014)—and online, in his blog, tedkennedywatson.com, where he makes daily observations on elements of beauty he encounters, such as the tulips available at the Pike Place Market or a pretty table setting he improvised for dinner on Vashon Island.

For Watson, setting a table is akin to painting. “I like a table to have a bit of a story, or at least spark conversation,” he says. “I put some interesting objects about, as well as unscented candles and always flowers. I am a big proponent of using single-stem vases and clear, short drinking glasses as vases. It spreads the visual joy around the table and also keeps the flowers low. I think you really see the flower when you look down upon it.”

Watson is lucky enough to have the best flowers just steps from one of his shops, from the stalls in the Pike Place Market. “I am so lucky to get to know these hardworking folks who grow the flowers, load them up each morning, bring them to their stalls, sell them, and then do it all over again the next day,” he says. “It is a labor of love.”

For a summer table, Watson turns to the reliable drama of hydrangea blooms. “I love the variation of blues,” he says. “I also love blue and green together, and hydrangeas have some of the very best leaves. Rarely do I ever put another flower with them, as they are just so beautiful massed together or as little single blooms dotting the table.” As for so many gifted designers, flowers never fail to provide Watson with the seasonally shifting inspiration he finds everywhere.