Garden District – Florists to the Field

How do two florists honor the farmers who grow their flowers? The duo at Memphis’s Garden District had a grand idea 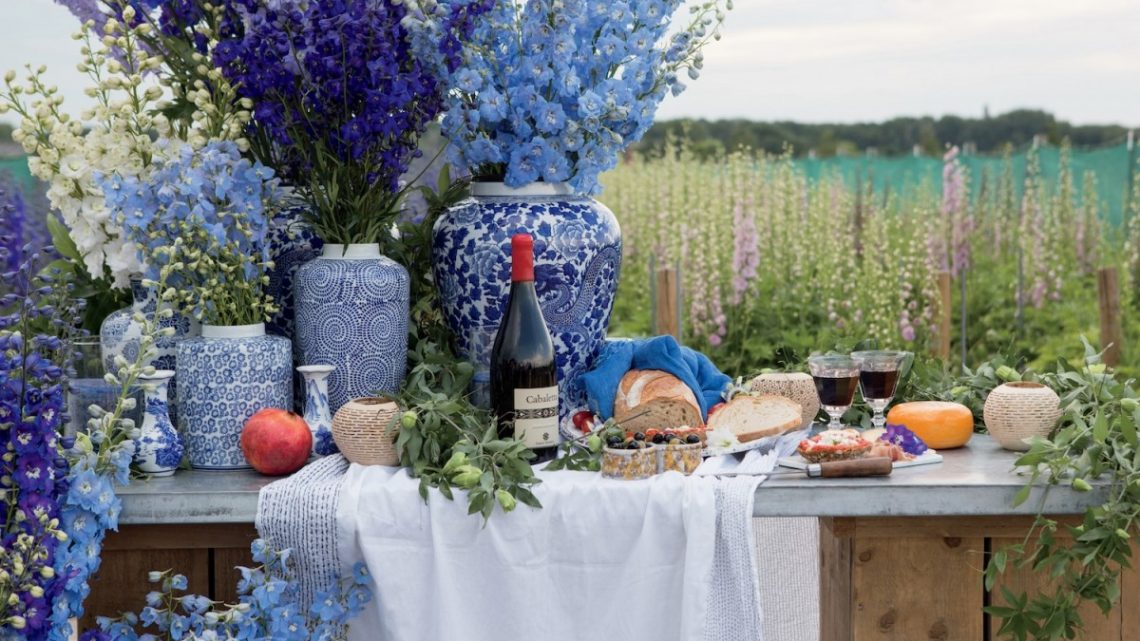 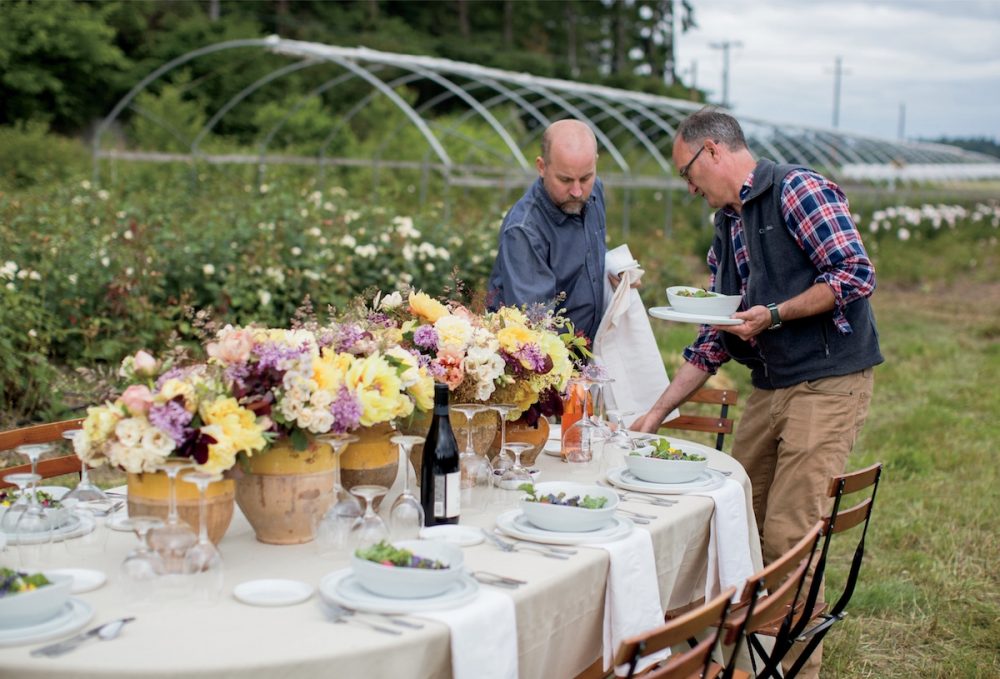 Erick New (left) and Greg Campbell put finishing touches on the table at Kenyon Growers in the foothills of the Oregon Coast Range, where everything from peonies to blackberries thrives in the rich volcanic soil.

So much ink has been spilled chronicling the now ubiquitous farm-to-table movement that even a kindergartener may demand to know where her kale came from. This decade-long course correction toward greater integrity in our channels of consumption begs the question: Is there anything new to say? Greg Campbell and Erick New, the intrepid owners of the Memphis floral design shop Garden District, say yes. 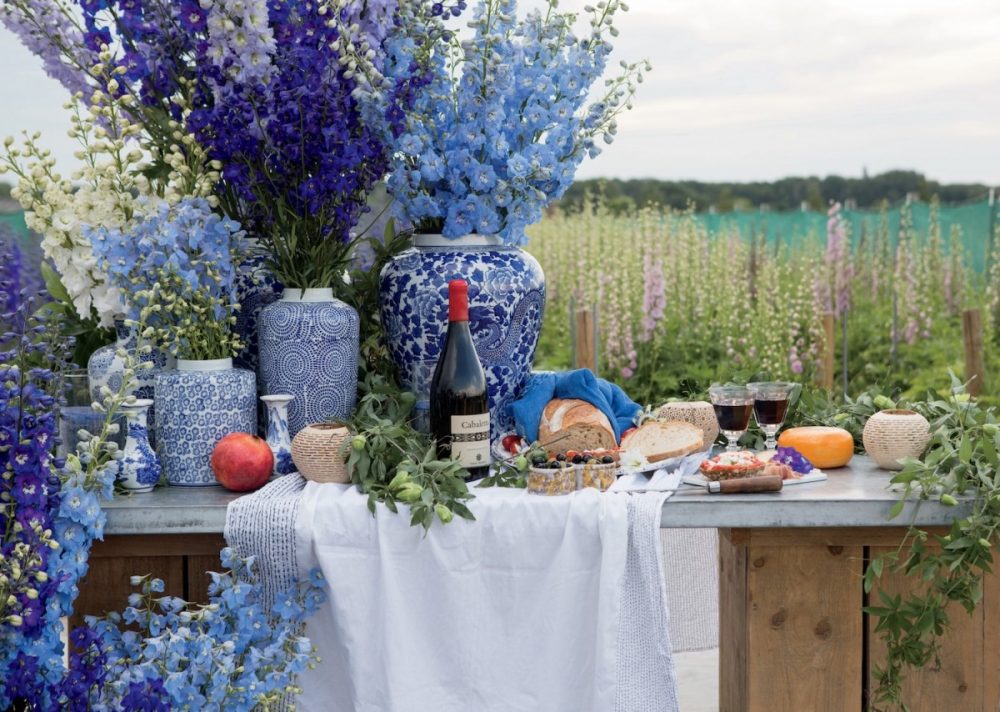 A table nestled in the fields of a Dutch delphinium farm is the stuff of a flower lover’s fever dream. For a display of delphiniums at the Wigchert family farm in the Netherlands, the duo used delftware vases as a salute to 17th-century Dutch history.

In their book, Florists to the Field (Southerly, 2018), Campbell and New make pilgrimages to 12 specialty farms to pay tribute to the families, growers, and colleagues whose floral bounty keeps Garden District humming. At each destination, the pair traverses field and forest, wielding clippers, gathering blooms and materials to use for a grand alfresco meal on the property. It’s farm-to-table back at the farm—a victory lap of sorts. 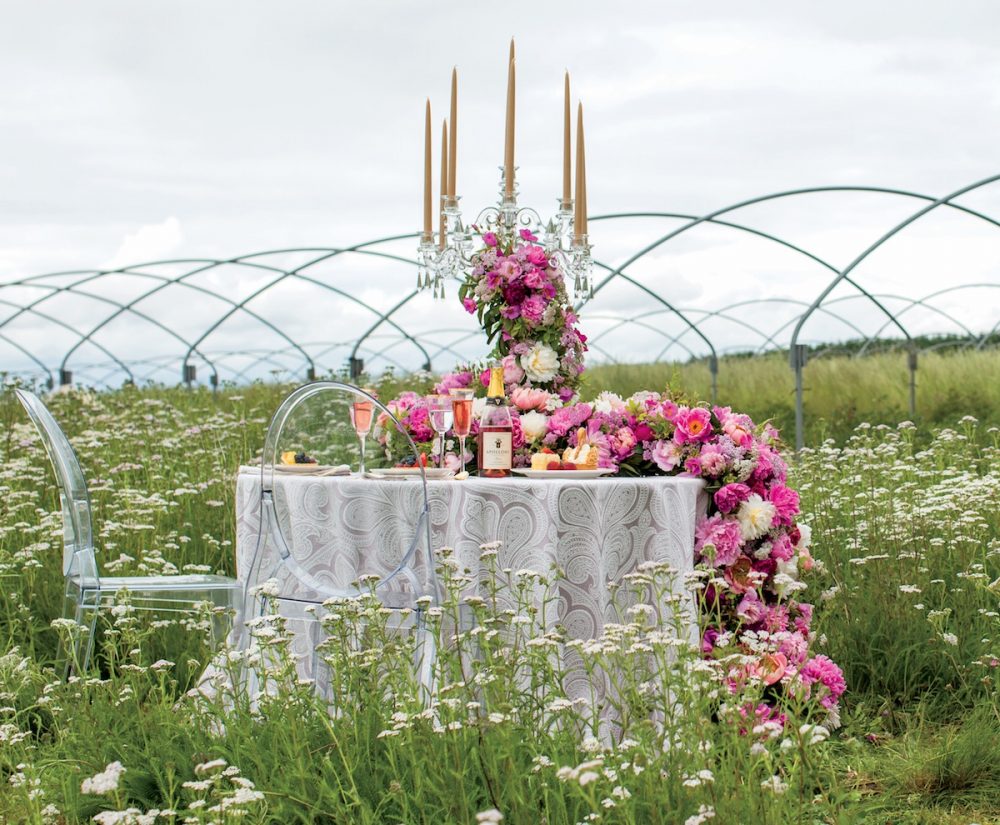 A garland studded with peonies looks regal in a field of yarrow at Oregon’s Hammelman Farms.

The range of locales in this odyssey (from Oregon to Arkansas, with three stops in the Netherlands) calls on a range of talent, and there is no shortage of either between Campbell, the “architect,” and New, the “engineer.” At Wilson Gardens in Arkansas, the designers set a long communal table in the middle of a cotton field, so guests look like they’re dining within a cumulus cloud. In Soldiers Grove, Wisconsin (at a farm so far off the beaten path that GPS says it doesn’t exist), the duo creates a spread under the trees that looks plucked from a bohemian fairy tale. At Camflor, a farm in Watsonville, California, Campbell and New staged a party in an avocado grove for the sprawling Campos family, complete with Mexican music and cowboy hats. 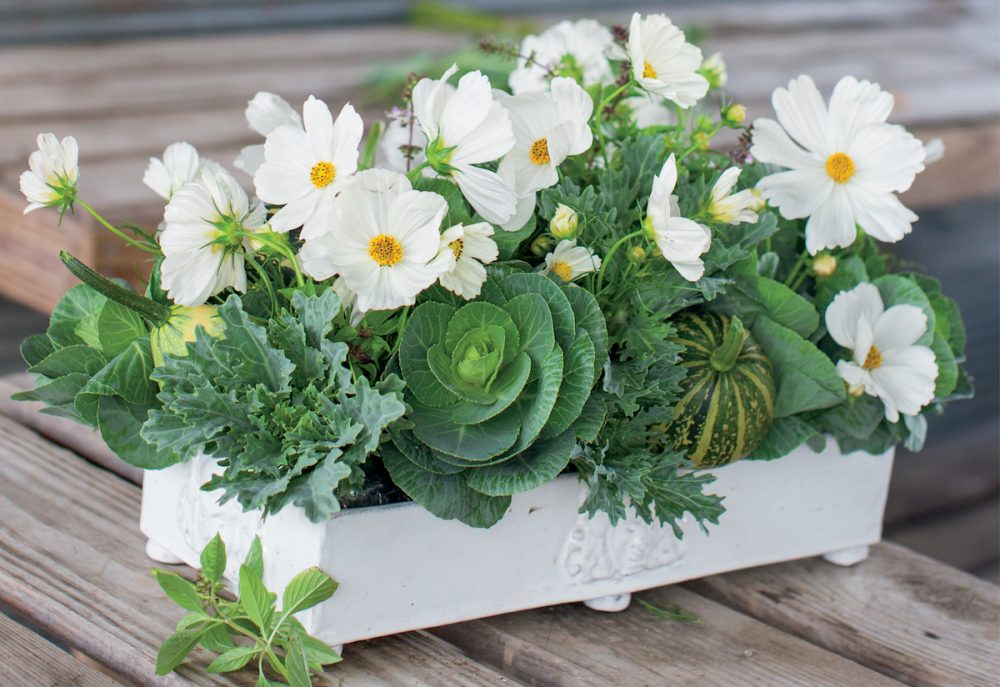 Cosmos, gourds, and greenery showcase the variety of Delta Sol farm in Arkansas, where New and Campbell staged a dinner on the levee.

Aside from the primary visual delights of this book, its pages hold an interesting and inspiring testament to how agrarian life—particularly in the American South—is pivoting and reconstituting itself for the modern moment. Tapping into the foodie phenomenon, The Farmstead on Woodson Ridge in Oxford, Mississippi, has vegetable and floral farms, a cooking school, guest cottages, and a newly renovated barn that doubles as an event space. On the bluffs of the Mississippi River, Delta Sol in Proctor, Arkansas, once home to a conventional farm with row crops, cattle, and horses, now prides itself on its certified-organic flowers, herbs, and honeybee hives. Wilson, Arkansas, a Delta cotton town near the verge of extinction not long ago, is now a hub of innovation anchored by Wilson Gardens and their cutting-edge work on sustainability. Farming is hard work, and one gets a sense in this book of the real exchange of gratitude that Campbell and New feel for the families (and most of these farms are run by families) who grow the flowers and plants that support their bustling city business and the gratitude that the families feel for them. 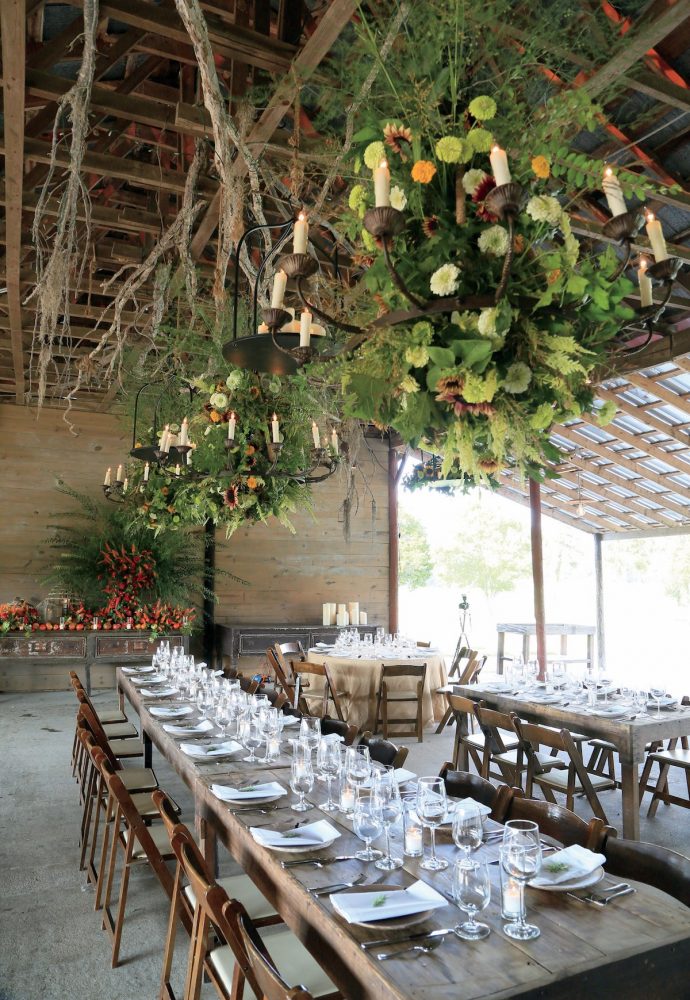 Florists to the Field’s inaugural dinner was held in the barn at The Farmstead on Woodson Ridge in Mississippi.

Florists to the Field chronicles the pair’s most ambitious effort in their 25-year partnership: one year, seven states (plus one foreign country), and 12 events honoring a beautiful and bountiful collaboration. The motto at Garden District is “Make it happen,” a phrase sure to have heartened many a nervous bride. Readers should feel fortunate that with this new book, once again, Campbell and New have done just that. 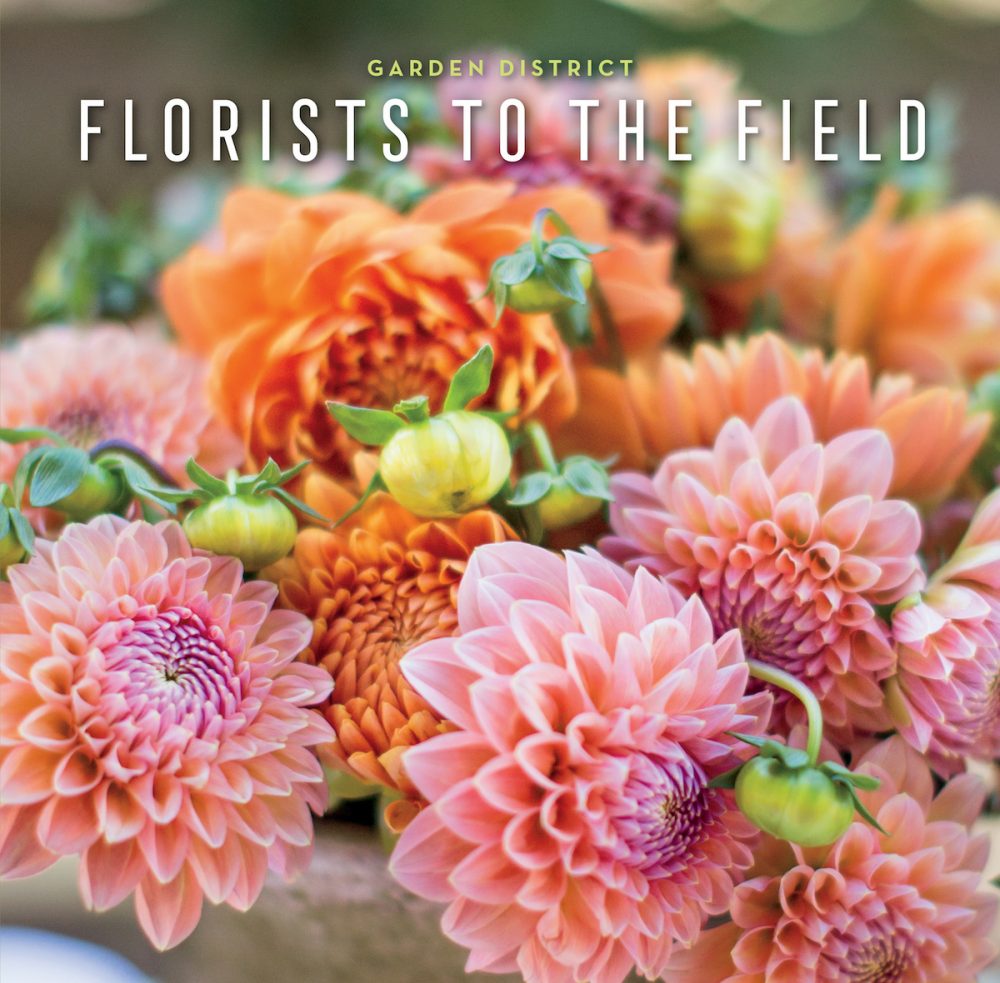 Florists to the Field (Southerly Media, 2018)