In Durango, Colorado, a Texas couple enlists Leta Austin Foster & Associates to decorate a historic property with an alpine point of view

When a Texas couple set out on a road trip through the Southwest, they didn’t anticipate that a stop in Durango, Colorado, would lead to anything more than a place to break their journey for the night. “As soon as we stepped out of the car, we felt refreshed. There had just been a small rain shower, the air was cool, and the landscape was so lush and green. We were also enchanted by the sense of a real community,” the husband remembers.

After returning several times over the next few months, they purchased a house high up the mountain that would become a second home for almost a decade, that is until road trips of another sort guided them toward a renovation project that would turn into a multiyear labor of love.

“We’d ride our bikes down into the Animas Valley to admire the orchards, organic farms, and all the gorgeous flowers that grow in this little microclimate,” says the husband.

One historic property particularly captured the couple’s attention: Although the gardens were overgrown and some of the fruit trees withering, the bones remained beautiful, and they loved how much of its seven acres wended alongside Hermosa Creek. They’d often wave and stop to chat with the elderly woman sitting out on her front porch. When the woman, a much-beloved local educator and garden aficio­nado named Roberta Barr, died a few years later, the couple knew they wanted to make her former home theirs, vowing to restore the grounds she had so lovingly tended throughout her life and to elevate the existing structures, which included a stone cottage, a 1930s log cabin, and several outbuildings, to meet their needs.


Adapting the house entailed adding a cedar-sided second story while restoring the main floor’s original stone-walled exterior, as well as removing and replacing a previous addition—architectural and engineering feats overseen by San Antonio architect Don B. McDonald. They also called upon Palm Beach designers Leta Austin Foster, who had decorated their Texas residence several decades ago, and her daughter, India Foster, to transform the interiors.

“The wife was clear that she wanted rooms to be light and bright, with no dark walls and nothing too Western-y,” says Leta. “They love traveling in Germany and Austria, and that guided us in a Tyrolean, alpine chalet–like direction,” she says.

“One of my favorite color combinations is aqua with cobalt blue, and mixing them with the warmth of copper and wood makes the kitchen such a pretty room to sit in.” — Leta Austin Foster, Interior Designer

“We tossed around the German word gemütlich a lot in our design meetings,” says India. “It doesn’t translate terribly well into English, but it’s that cheerful, cozy feeling that particularly comes from Bavarian and Austrian design and architecture. We wanted to bring that vibe to Colorado without being heavy-handed.”

Perhaps the most defining element of the décor is the paint color Leta chose for the woodwork throughout every room, Wythe Blue by Benjamin Moore. “It has a bit of clay that really changes with the light, becoming a richer, greener tone when the leaves are off the trees in winter, and a little cooler and bluer in summer and fall,” says India. The design team selected happy but sophisticated floral prints to mingle with neutral fabrics and punctuation points of red throughout to “keep things from skewing too feminine,” says Leta.

Comfortable and elegantly scaled furniture (almost all designed by the interiors firm) offers spots for lounging, while bedrooms filled with thoughtful details such as upholstered walls that muffle noise provide sanctuary after days spent skiing, hiking, or working in the orchards and garden—which is where passersby often find the couple these days.

“People love to stop and ask questions about what we’re doing or share their memories of Mrs. Barr,” says the husband. “Those who knew her well tell us she’d be happy with what we’ve done with her place.”

And visitors discovering the charms of the prop­erty and Durango for the first time might well be inspired to make the journey a more permanent one of their own. 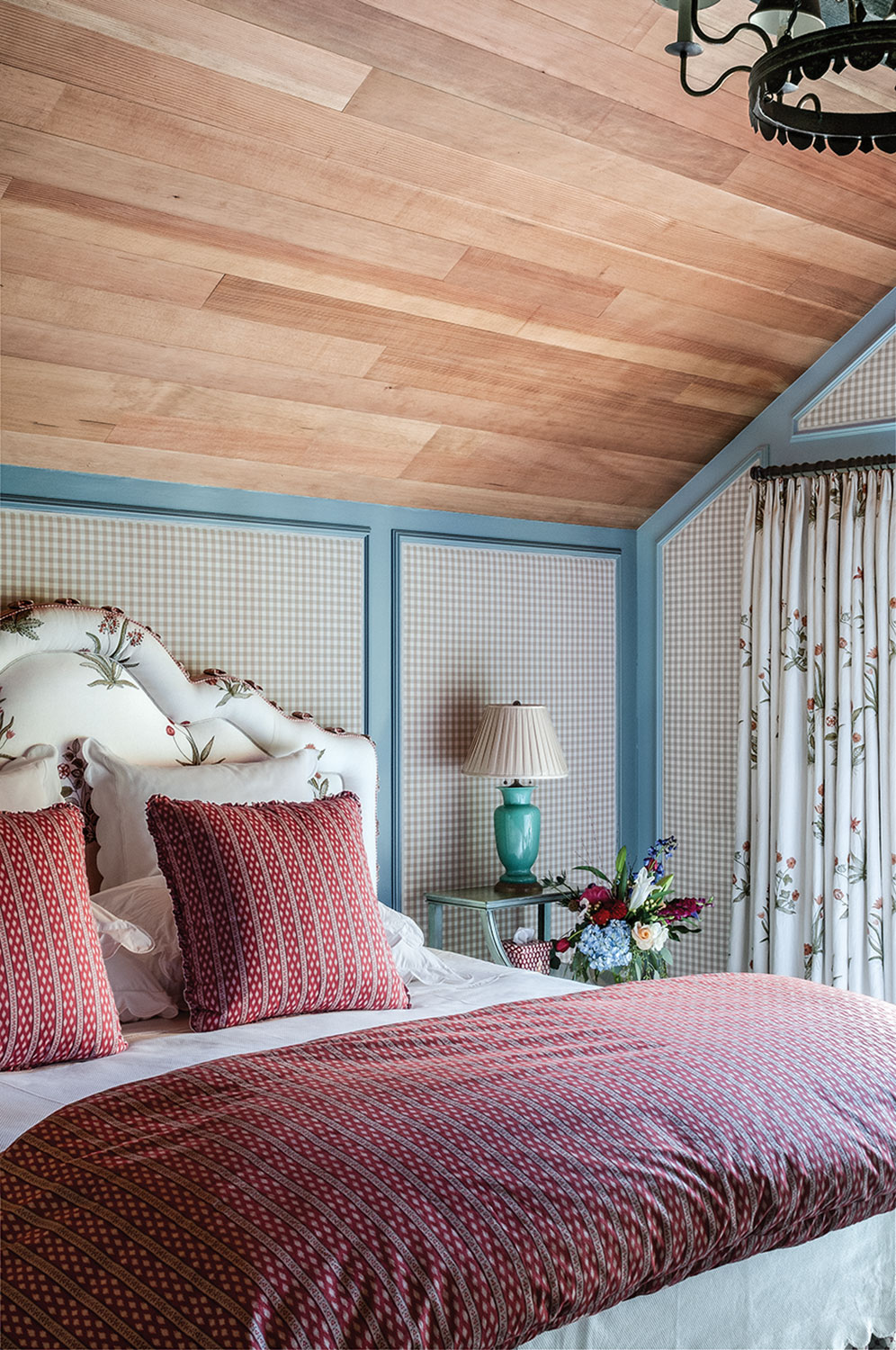 In the master bedroom, a wood ceiling contrasts with upholstered walls and Wythe Blue molding. 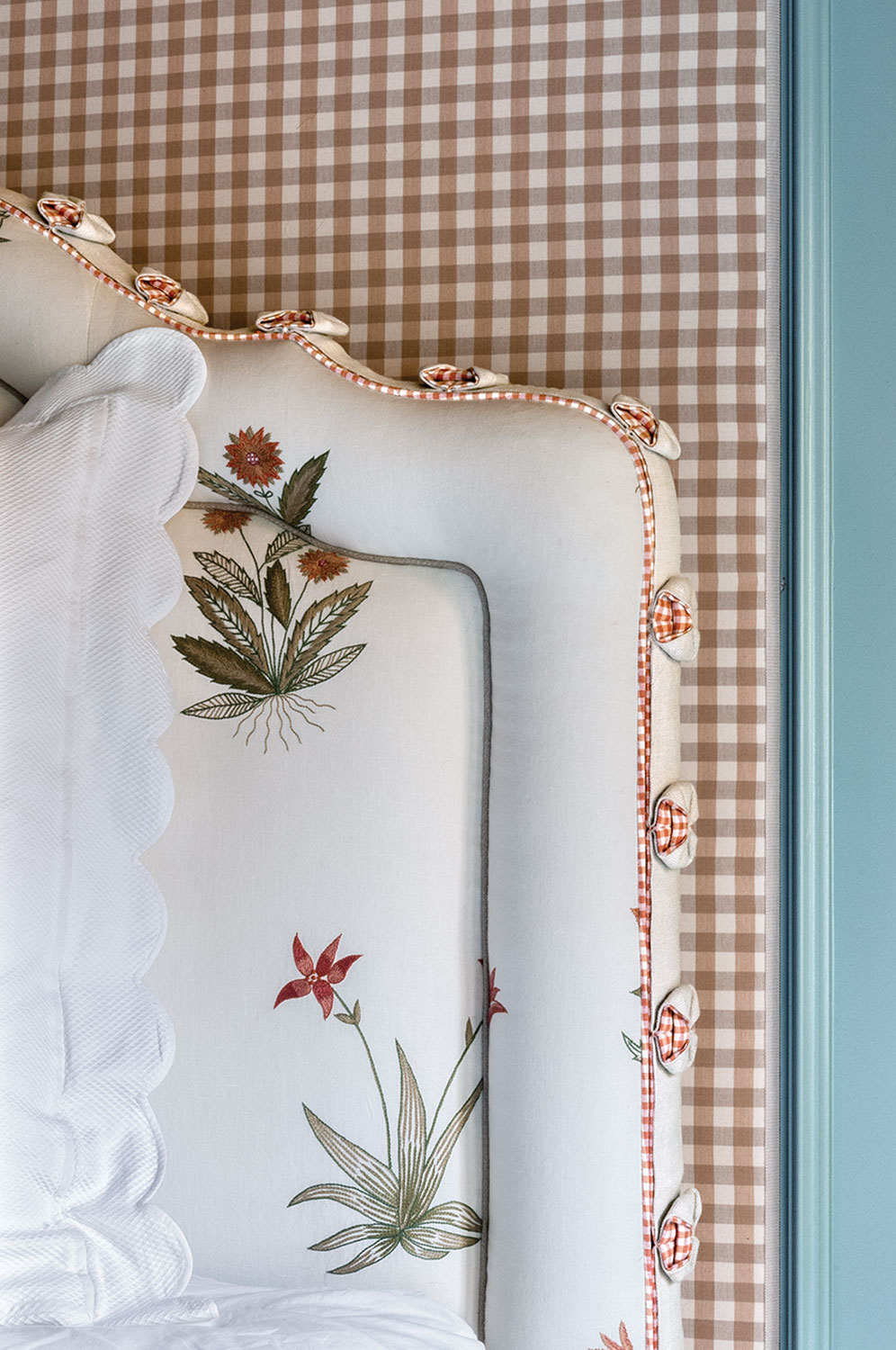 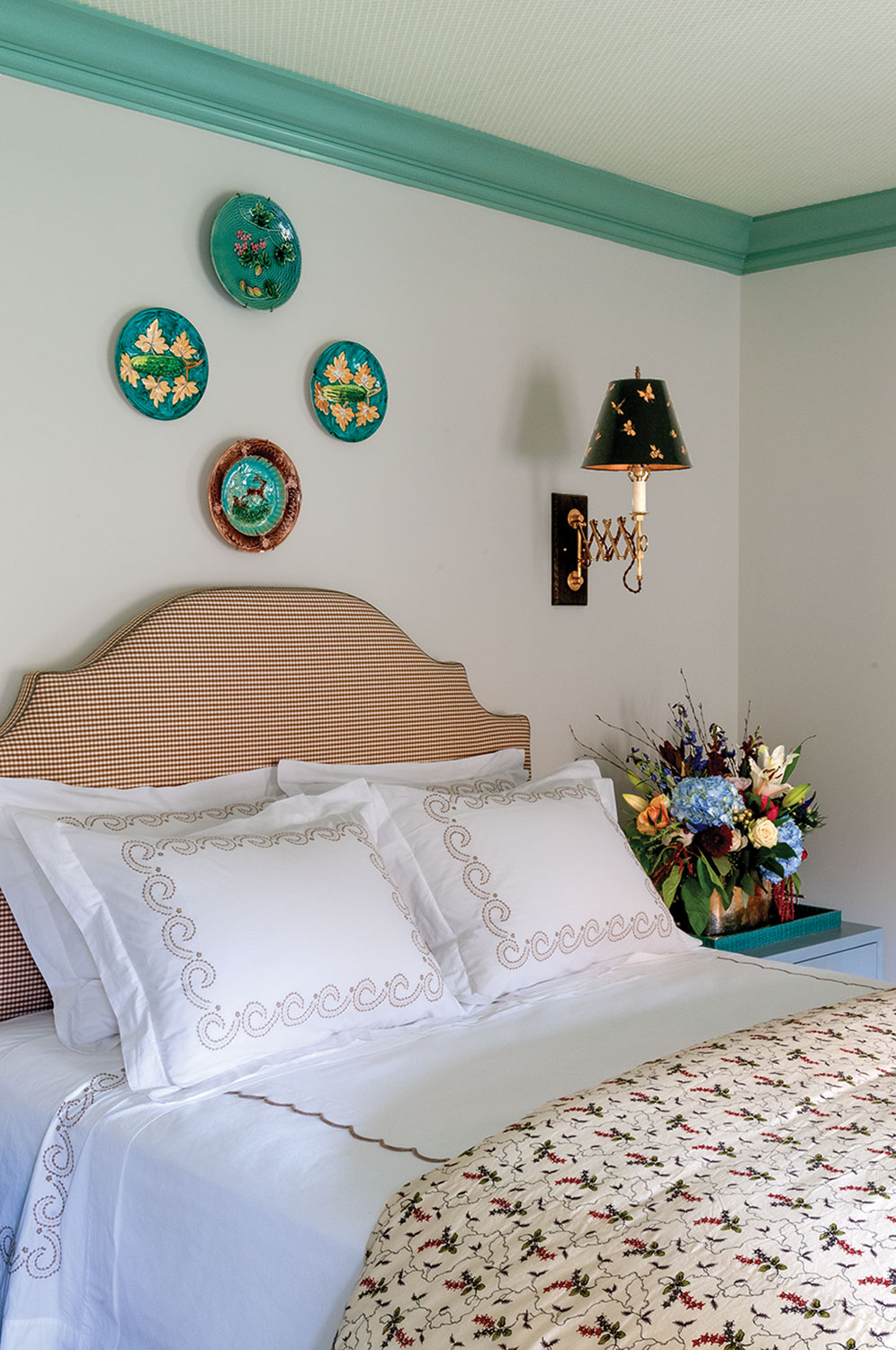 Thoughtful details in the guest bedroom include swing-arm lamps to accommodate nighttime reading.