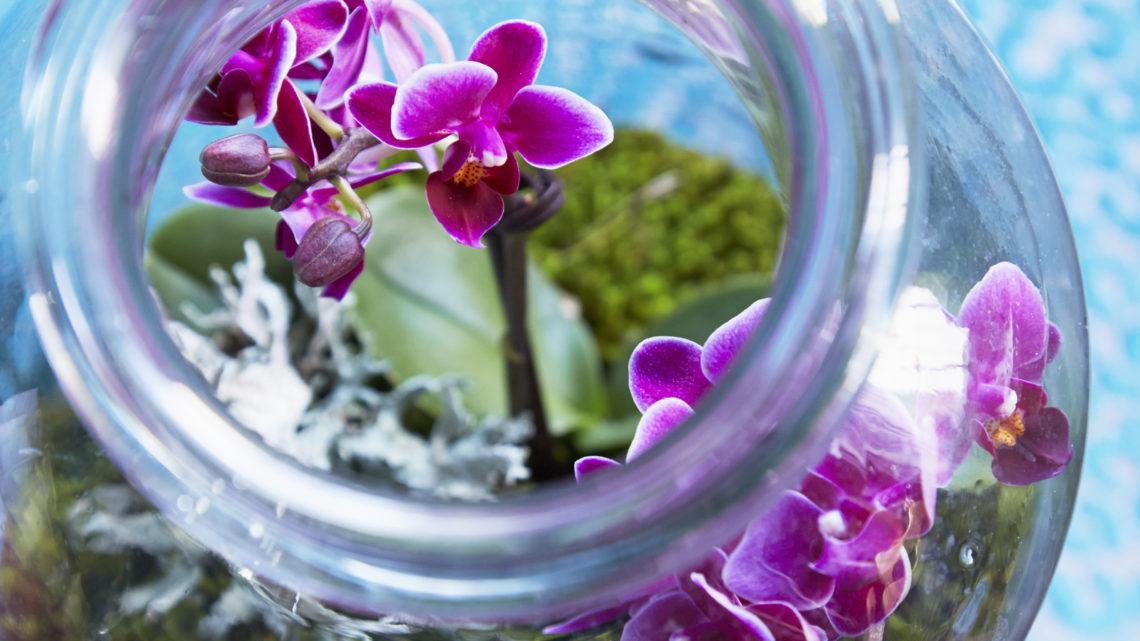 “I find people love it when I include fruit in my arrangements—of course the practice goes back to Constance Spry, and even further back to the Dutch Masters, but many people are still surprised” when they catch a glimpse of the fruit up close. 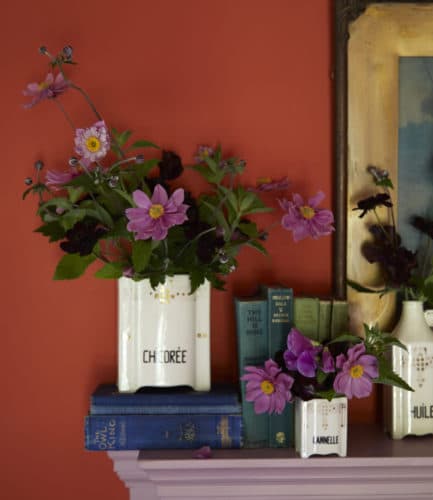 Based in Oxfordshire, in England’s bucolic Cotswolds, floral stylist Willow Crossley is known in part for airy, unruly bouquets that look just-plucked from a British garden. She mixes her flowers intuitively, like spontaneously adding a few dark blue–purple anemones to a gathering of warm-peach and yellow blooms. If the combinations happen to follow the rules of color theory, she’ll feel rather chuffed, but her process isn’t forced. Guided mainly by instincts underpinned with formal studies, Crossley’s work has been sought after by Anthropologie, Jo Malone, and Mulberry.

Apart from the flower arrangements themselves, what draws the eye is her air for juxtaposing freshly cut stems with patterned walls and fabrics. 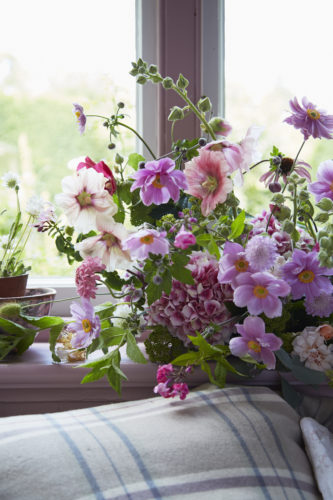 The hollyhocks take centerstage in this feminine grouping

“I love wild arrangements in front of wild wallpapers—as mad as I can make it.I do a lot of green on green. And I adore textiles. I have so many bits draped all over the house. Their color combinations will often influence me especially, but I also love arranging flowers for a specific area,” explains Crossley. Eye-catching containers, ranging from lustrous ceramics to softly hued translucent glass to Bridie Hall’s graphic brush pots, are a key part of her presentation, too.

Although she grew up surrounded by nature, the fortuitously named Crossley had no childhood aspirations to work with flowers. Her early years were spent in rural Wales with what she describes as “rugged wildness and huge sweeping landscapes” outside and flowers on every surface inside. (Her mother, artist Kate Corbett-Winder, wrote for Vogue, penned books on interior design, and was—and still is, says Crossley—a keen gardener with the greenest of thumbs and the longest, most enviable flower borders.) After she earned a degree in fashion journalism at London’s University of the Arts, she did stints at magazines and started her own blog, which initially covered fashion as well as a myriad of domestic crafts. 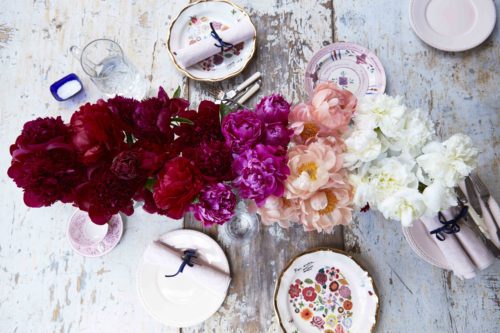 Crossley describes this arrangement as “an ombré peony river running down the table.” To create the effect, she clustered together numerous little milk bottles.

The blog led to book deals— first, The Art of Handmade Living, published in 2012, quickly followed by Inspire: The Art of Living with Nature, released in 2014. It was the enjoyable task of writing the ‘Flora’ chapter for Inspire that caused Crossley to shift her focus toward flowers full time. Perhaps the move also had something to do with the fact that she had become a young mother to a growing brood of little boys, or the earlier influence of her mother, or simply her boundless creative energy. But whatever the extra impetus, she found flowers both calming and enthralling. 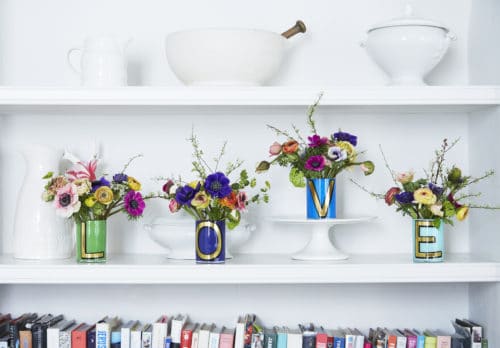 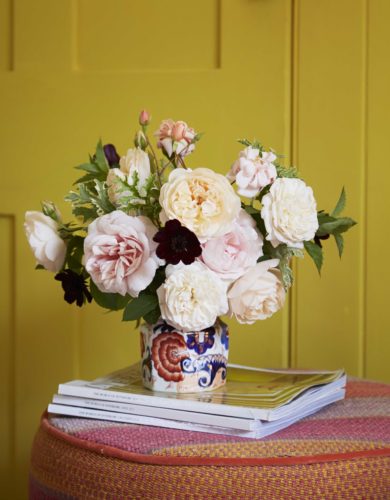 Crossley’s first proper floral styling job—the wedding of one of her best friends—came on the heels of an intensive course at London’s famed Covent Garden Academy of Flowers where she studied core techniques. “The course taught me that it is okay to remove flowers or foliage when they just aren’t working—to not force anything in out of fear of waste. That lesson may have helped me develop my lighter, airier style,” she says. For that first wedding, Crossley acknowledges that she also relied on her mother’s expertise. She’s also grateful for clients who give her room to experiment. “They seem drawn to my loose, natural look and let me run with an idea, which is great because I love to push myself creatively.” Whenever possible, Crossley prefers to use seasonal, locally grown flowers and foliage such as the organic bounty grown by Bridget Elworthy and Henrietta Courtauld (aka The Land Gardeners) at Elworthy’s Oxfordshire home, Wardington Manor. “Willow has a great eye for the beautiful and unusual— she loves the natural English garden flowers we produce,” says Elworthy.

“I love wild arrangements in front of wild wallpapers—as mad as I can make it.” 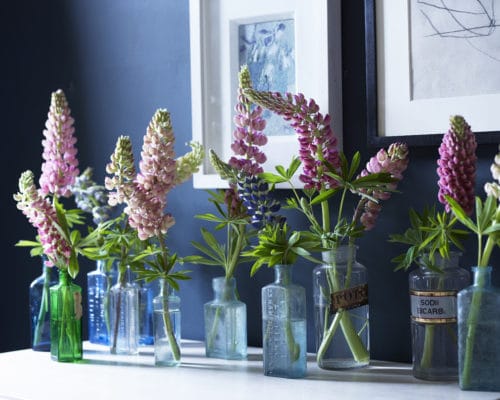 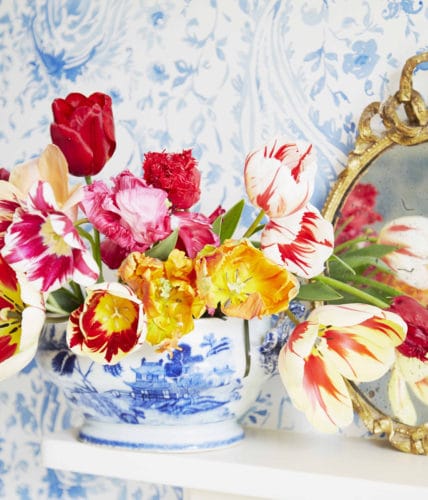 Crossley favors big bunches of tulips in vintage jugs and old ceramic cachepots, not a few singular stems dotted around.

Also following in Spry’s footsteps, Crossley completed her most dramatic retail shop window installation to date—a country carnival–themed display with life-size carousel horses made of roses, foxgloves, carnations, delphiniums, peonies, and more. Created with set designer Angus Buchanan as part of the alternative spring floral art show, Chelsea in Bloom, the project required Crossley to work with more restrictions than she’s accustomed to and to run ideas by a cast of organizers. But in the end, the fanciful vignette—with its vintage, candy-colored palette—won the 2016 People’s Champion Award. The experience may be a harbinger of new projects to come: “I don’t like to get bored,” she says. “I’m always on to the next thing!” 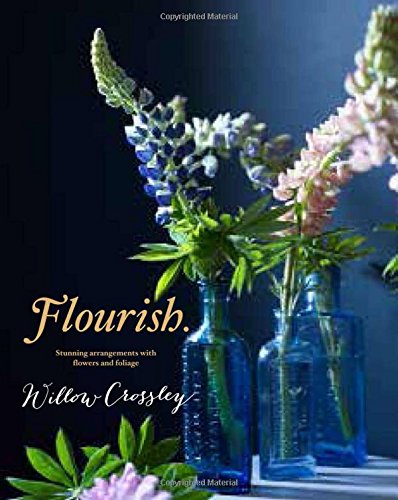