Designer Phillip Thomas used jewel tones, dramatic accents, and funky light fixtures to transform a prewar apartment on the Upper East Side into a space that envelops its inhabitants in warmth, color, and comfort

In the living/dining room, interior designer Phillip Thomas treats pink as a neutral and dares to treat tiger print the same, anchoring patterns and colors to bring them all together. Sconces by Vaughan; mirror by Global Views. See a list of sources for this home.

As the child of attorneys who divided their time between Latin America and New York and traveled the world visiting museums and exotic sights rather than beaches and amusement parks, designer Phillip Thomas has the benefit of a visual vocabulary that runs deep and informs every choice he makes. “My childhood library was upholstered from floor to ceiling in tiger velvet from Scalamandré. When you grow up in an aggressive environment like that, it shapes you,” he says.

Gracie wallpaper and a custom console give a hint of what to expect in the rest of the house.

He casually cites childhood experiences—decorating his parents’ new apartment in Chile while there on his junior year abroad, a month in the Argentine embassy in Russia as a teenager when the ambassador was away—as influences. His mental design catalog is rich, full of international styles and a diverse deck of colors.

Nevertheless, his design predilections work for smaller spaces as well. When he started on his first project for a young family with two toddler boys, the wife wanted to go neutral. She’d seen a project she admired. Phillip’s response: “We can do that of course. But you’re not gray people. You’re much more fun.”

In the gallery, a marquetry wood floor serves as a dramatic foil to the early 20th-century French stingray chest. Door color is “Old Navy” by Benjamin Moore.

His embrace of bold color, vibrant pattern, rich textures, and luxurious finishes inspired his clients to create rooms that are as much reflections of them as they are stylish. A few years later, they came back to him, saying, “The boys are growing, but the apartment isn’t. We need to find a larger space.’ ” What they discovered was an “estate condition” apartment on the city’s Upper East Side—a prewar space with Georgian details and an existing floor plan that suited their needs without a complete overhaul.

“There are certain spaces that you just want to envelop you. The library is one of those spaces where you feel like you’re getting hugged, like a cocoon.” —Phillip Thomas

The library cocoons during the day with allover paint in “ Ladybug Red” by Benjamin Moore and glows softly at night thanks to the iridescent gilt ceiling. Sofa fabric by Schumacher.

The plan was to use the same pieces from the first apartment. But Phillip was dead set against an exact replica of that home. “Frankly, I didn’t want their guests to walk in and say instantly, ‘Oh, you used exactly the same furniture,’ ” says the designer. Rooms were reconfigured and rearranged, creating an entirely new feeling with their original pieces. The theme was “glam meets gracious with a wink,” with a goal to create rooms “that excite the eye rather than exhaust it,” he says.

In the dining area, flowers reflect Phillip Thomas’s approach to decorating: masses of not perfectly matching tones that come together naturally.

The Gracie paper in the entry sets the tone. “It’s intense,” he says. “But I think you want people to stop and appreciate your home from the moment they walk in.” The front door was another instance of push-pull that led the team to brilliance. Phillip envisioned a black lacquered front door, but the wife resisted, suggesting navy blue lacquer instead. “It’s a wonderful twist on the formula,” says Phillip. “I appreciate it when a client pushes back. It makes our journey more interesting.”

A carpet by Stark grounds the pink and blue living room. The blue velvet pillow fabric is by Kravet.

The designer admits to going a little crazy with the living room, combining sympathetic prints, patterns, and colors whose affinity was not readily apparent on the design board. “I thought the clients’ heads were going to explode when they saw the palette,” he says. But the room’s large scale and great light gave him flexibility to create three separate seating areas to accommodate a large cocktail party or a get-together with close friends.

The kitchen feels colorful despite its white cabinetry thanks to blue accents, including a lacquered ceiling that reflects light. Side chairs from Serena and Lily; globe pendants by Circa Lighting

His priority in this space was to create a room of related but separate environments, a place “where you don’t want to leave.” To do so, the designer thought about how his clients live. They entertain; their children have friends over; beauty and style are priorities. With that in mind, Phillip turned the previous dining room into an indulgent library/family room. And he integrated the formal dining area into the living space, custom designing the table with a Bronze Corian top that is both practical and great-looking. It’s the details throughout that make the room as intriguing as it is welcoming: the firedogs by Marc Bankowsky; the early 20th-century Leleu floor lamp; the instances of tiger print, which acts as a neutral, sustaining the patterns at play.

In the main bedroom, Phillip added a canopy to the couple’s original bed. “The ceiling is a subtle pink that bathes the room in soft light,” he says.Bed linens by Matouk; light fixture by Circa Lighting.

In contrast, the library, with its lacquered red walls and iridescent gold ceiling, radiates warmth. “There are certain spaces that you just want to envelop you,” says Thomas. “The library is one where you feel like you’re getting hugged, like a cocoon.” That feeling is juxtaposed by the chandelier—designed by Phillip—that had illuminated the former dining room. He calls it a “celestial explosion, evocative of a chandelier you might see at Lincoln Center.”

The kitchen is the room that required significant renovation. “They’re cooking for two growing boys, and they have a cute, rambunctious dog, so this room had to work,” says Phillip. In the interest of style longevity, cabinets were left white and walls were covered with a blue vinyl wallpaper that can be cleaned easily. Great light and a dynamic layout mean the room gets lots of use.

For the younger son’s room, the designer upholstered a niche to create a quilted headboard. Ceiling paint is “Sapphireberry” by Benjamin Moore; bed linens by Matouk.

The serene main bedroom has a ta-da moment in the wife’s dressing room, with a fabric by Michael Smith covering the walls. “Don’t you want to wake up in the morning and feel like you’re being kissed? It takes me back to childhood when my grandmother covered me in kisses,” says Phillip. The color frames and flatters and connects to the soft pink on the bedroom’s ceiling. That’s the genius of Phillip Thomas. He uses the lessons of a life well traveled and studied to create rooms that are comfortable, interesting, and style rich—with a wink.

“She may have been apprehensive at first, but the fun and femininity of the space are hard not to love,” says Phillip of the wife’s dressing room. Chandelier by Circa Lighting

“Don’t you want to wake up in the morning and feel like you’re being kissed? It takes me back to childhood when my grandmother covered me in kisses.” — Phillip Thomas

The main bedroom was large, so Phillip and the architect designed a niche for a desk area.

The walls in the husband’s study are clad in wenge wood, and the ceiling in faux pony hide wallcovering. Lantern by Vaughan.

In one of the boys’ rooms, Phillip cut the striped ceiling paper into squares, adding energy to the space. Carpet by Stark.

In the bar, different papers cover the wall and ceiling, adding energy to the monochromatic space.

“It’s a wonderful twist on the formula. I appreciate it when a client pushes back. It makes our journey more interesting.” — Phillip Thomas

The living room carpet is by Stark; blue velvet pillow fabric is by Kravet.

On color in a small space: The library’s allover red worked because we embraced one color. There was less visual clutter than if we’d had contrasting trim and moldings.

Study the light: Color changes over the course of a day. There are so many subtle nuances.

Never ignore the ceiling: In the main bedroom, for example, the ceiling is a subtle pink that bathes the room in soft light.

Take a walk on the wild side: There is a luxury to animal prints, but they can take such a beating and you never notice it. They only get better.

Lighting matters: Don’t shy away from a large light fixture. It draws your eye up, reveals the architecture.

Be a bookworm: I know screens are practical choices for reading, but bookcases are so important. Your books are a reflection of your tastes and history. I tell my clients, “If you love a book, buy it in hardback. Use your Kindle for the beach reads.”

This story appears on the cover of Flower magazine’s Jan/Feb 2021 issue. Subscribe to the magazine or sign up for our free e-newsletter. 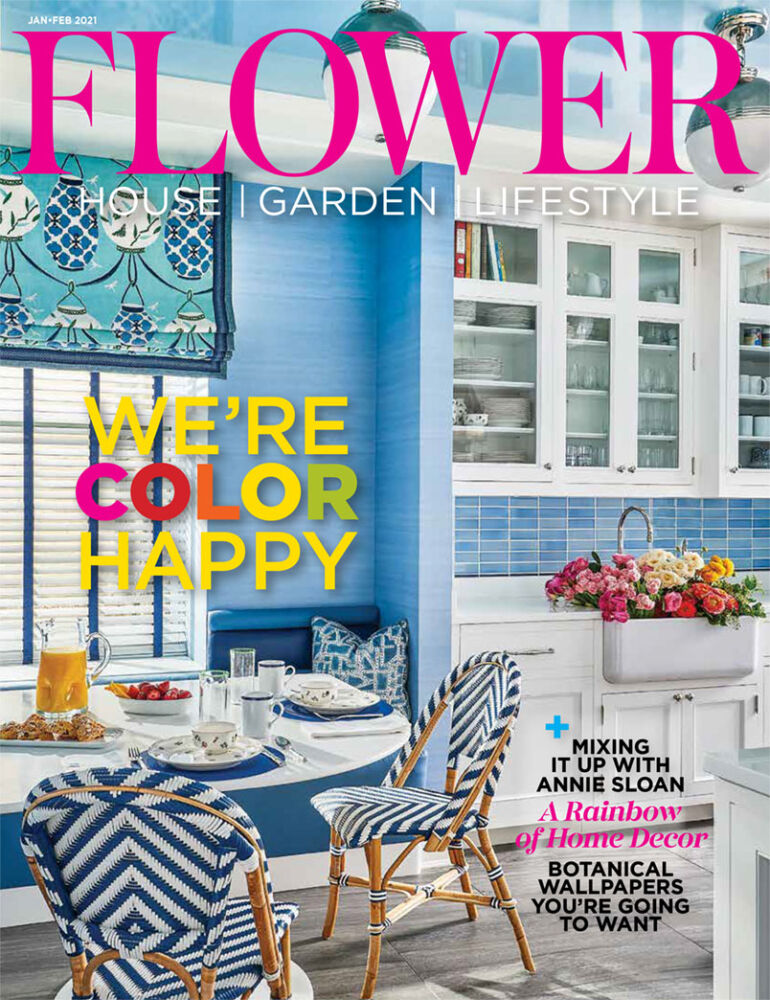