"It’s like shaking pepper out of a shaker. It’s that simple," writes gardener Mary Walton Upchurch of the seeds saved from dried poppy pods. Sow your own poppy seeds this fall, and reap the benefits year after year. 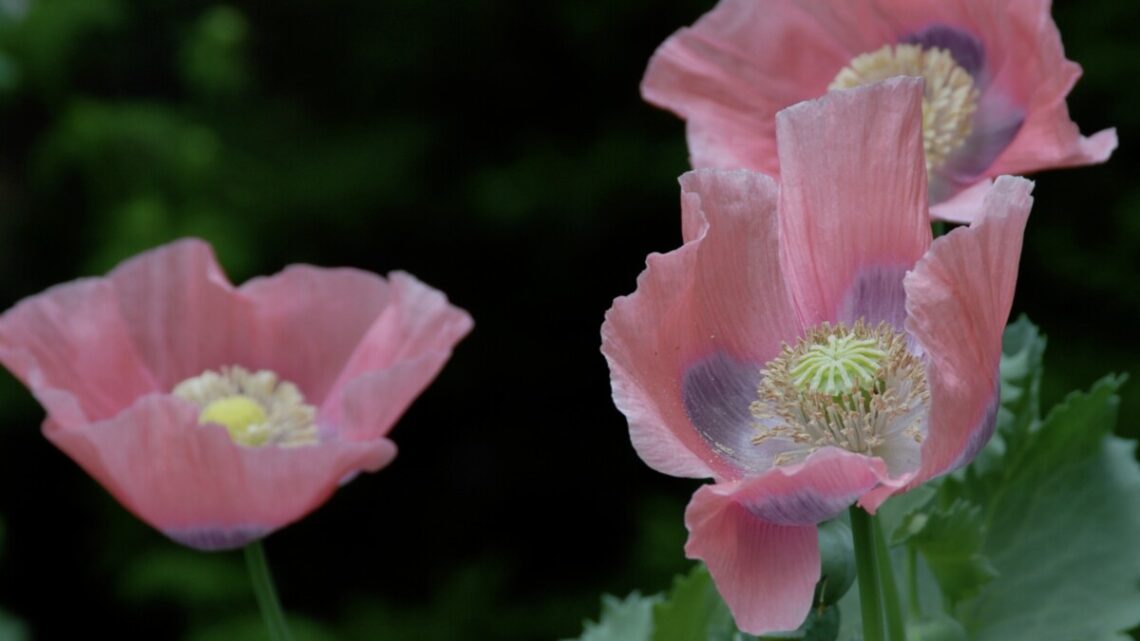 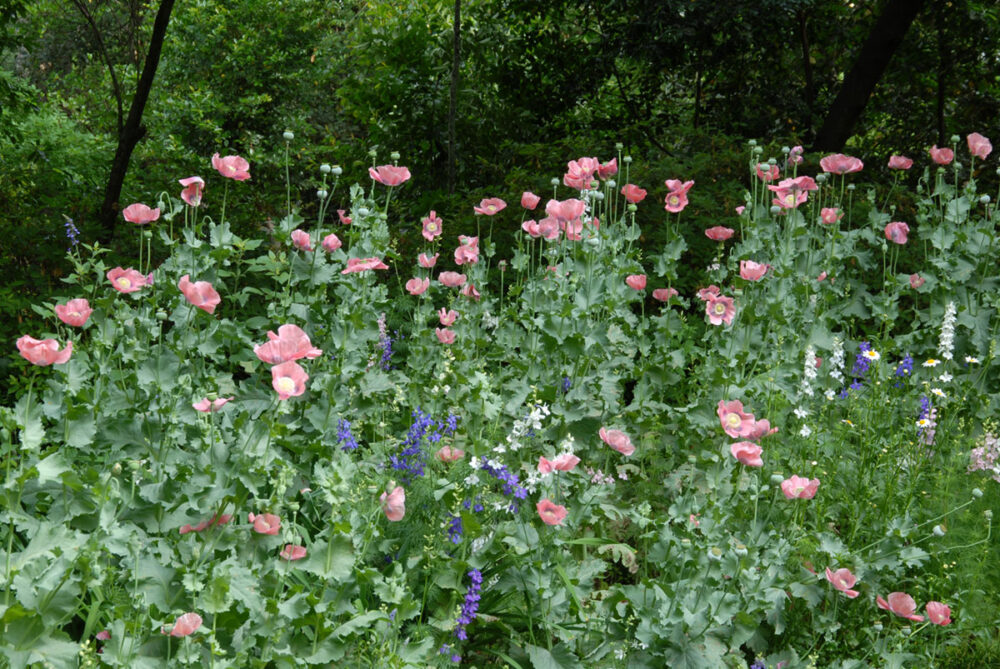 Poppies and larkspur, grown from seed scattered in the fall, bloom in the author’s garden.

Before I moved to the mountains of western North Carolina, I gardened for thirty-five years at my home in Montgomery, Alabama. There in October I would plant seeds of hardy annuals: cornflower, larkspur, and poppies, the old-fashioned favorites that add such charm to the Southern garden in the spring. It’s fun to plant seeds, to sprinkle tiny specks into the soil and anticipate the flowers to come. Every day I would water the seeds with a gentle shower from the hose and watch the drops fall to the soil and disappear instantly, an indication of a bed well-prepared with compost.

For larkspur, poppies, and cornflowers, planting by seed is the best way to grow these flowers. This has a great advantage, readily apparent to someone who has bought twenty-foot-tall magnolia trees and truckloads of shrubs: planting with seeds is cheap. When I would go down to the seed store to buy larkspur seed and the salesman would start to weigh out the standard amount, 1/8 ounce for sixty-five cents, I would wave my hand grandly and say, “No, I’d like two dollars’ worth, please.” 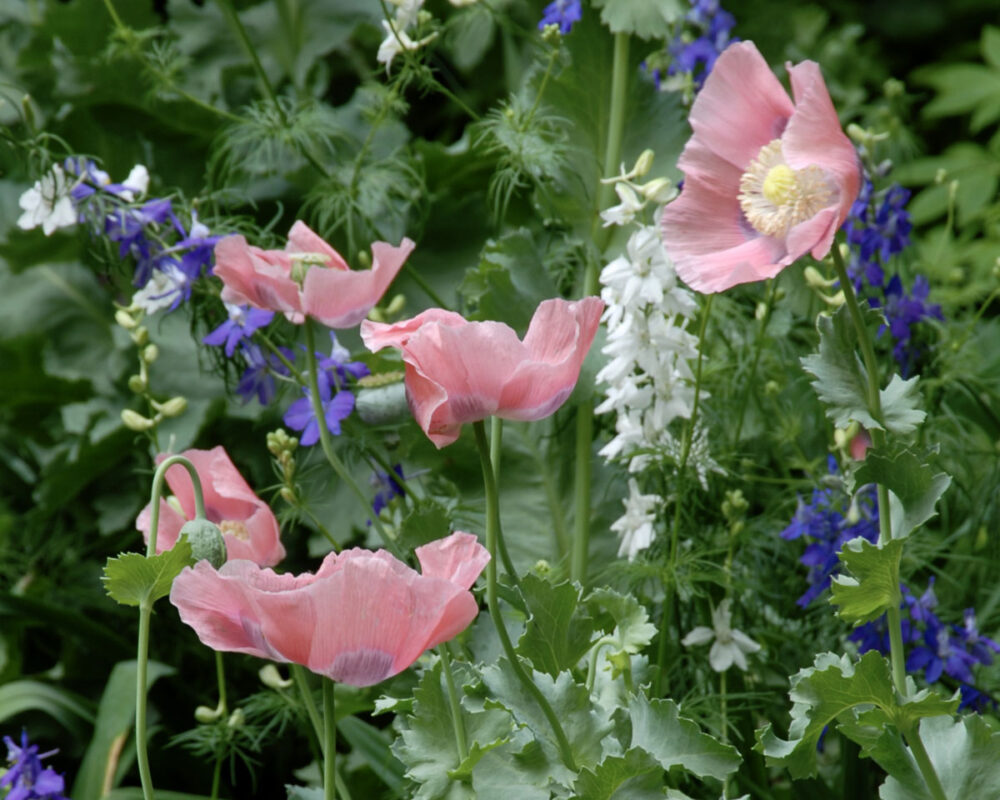 As with everything else in the garden, there can be delightful memories associated with seeds of special flowers, where you first saw the blossoms, how you first obtained the seed. The highlight of my spring border in Montgomery were pink poppies. These poppies came from a garden in my neighborhood that I had admired for years. Although I never knew the people who lived in the house, I knew all the plants that lived in their front garden. Among many handsome flowers, pale pink opium poppies were outstanding every spring. One year I noticed the garden was filling with weeds. Then a ‘For Sale’ sign appeared. From one of my neighbors I learned that the man who had lived there had died and his only child, who lived out of town, was selling the house.

This gave me an idea: I decided to harvest some of the poppy seeds. I felt the gardener who had lived there would want to share his treasures. And with the garden in such a perilous state—who knew who would buy the house and what would become of the flowers—my resolve increased. Finally, after the poppies had bloomed and set seed, I armed myself with clippers and a paper bag and drove over to the house. It was on the corner of a busy street, and while my car was stopped at the red light, I hopped out and—snip, snip, snip—committed larceny. 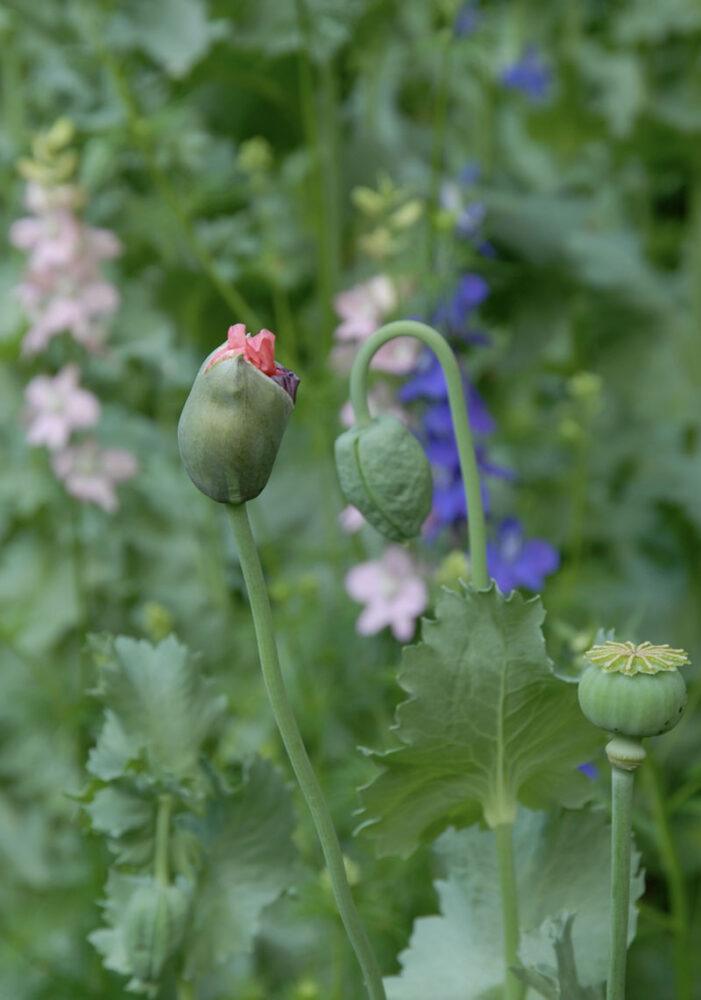 A young poppy bud hangs heavy on its stem, while another reaches skyward as it begins to bloom. Yet another swells with seed. 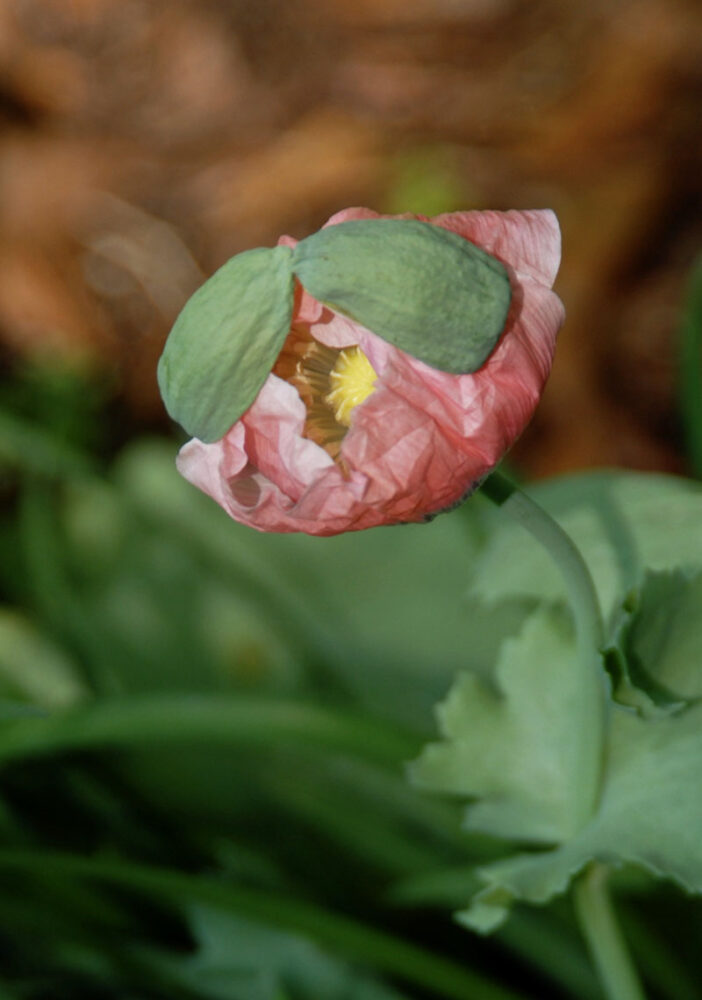 As luck would have it, just at that moment a neighbor drove up and asked me what I was doing. “See,” I said, showing him a round poppy pod with a circle of holes at the top, “all you have to do is keep this in a cool, dry place this summer, and in the fall, shake these seeds out on the ground in a sunny flower bed. It’s like shaking pepper out of a shaker. It’s that simple.” He said he was going home to get his clippers.

The following October, I sowed these seeds in my garden. Hundreds of tiny seedlings appeared. I thinned them out. During the winter they grew. In spring they were three to four feet tall, strong grey-green plants with wavy-edged foliage on twisting stems. Oval flower buds appeared on stems that hung down with the weight of the bud. And then suddenly, one day in late spring, the poppies lifted their buds heavenward and began to bloom. Crumpled pink, tissue-paper petals opened wide to reveal a pale blue center and a crown of golden anthers. The flowers seemed to glow with a spiritual intensity. These poppies were five feet tall, a forest of elegant foliage, sinuous stems, graceful buds, and blossoms. Examining them every morning with the light shining through their petals was almost a mystical experience. 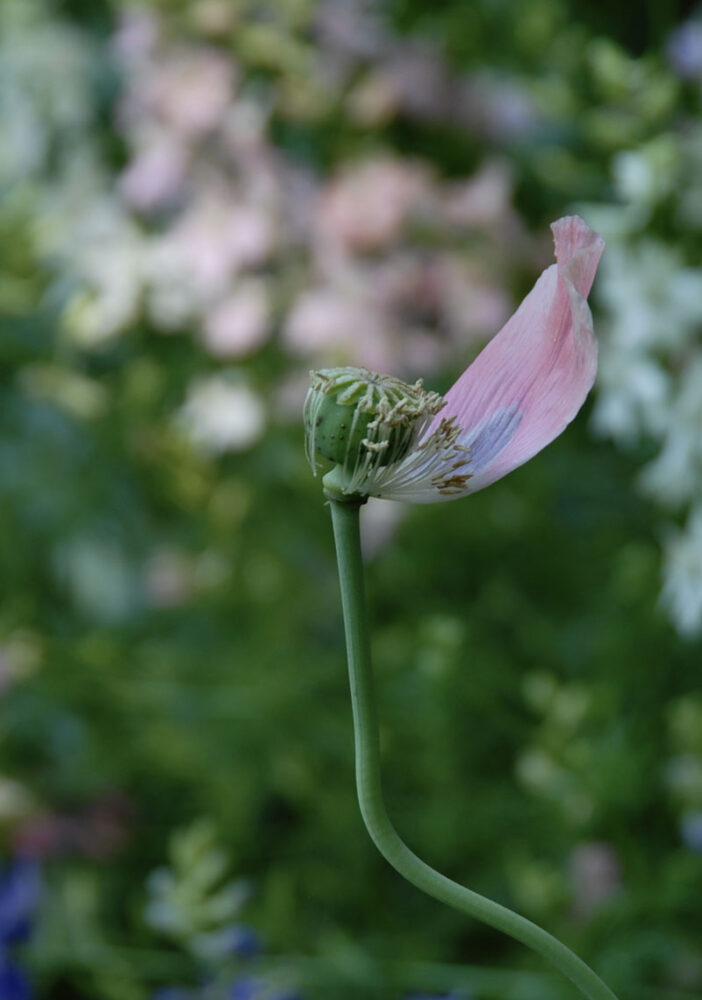 Gradually the petals wither and fall away, leaving the ovary to set seed. 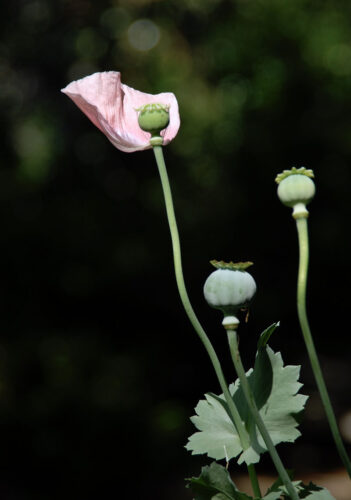 Allow the pods to dry in place on their stems before harvesting.

Gradually the petals withered and fell away, leaving the ovary to set seed and swell into pods. The staccato rhythm of the pods in the border was so striking that they rivaled the poppy flowers for interest. I let the pods dry in place and then harvested them. By this time, the house and garden where these poppies had come from had sold. The first thing the new owners did was get rid of the garden. When I saw them pull up the poppies like weeds, my seeds became even more precious. I had saved something very special from destruction.

I shared these poppy seeds with friends, an elderly lady who is an expert gardener, a young plantsman just beginning his career, a friend who lives in the pine woods of Mississippi, another friend who lives on the bay in San Francisco. I also shared these poppies with a new friend. When she came to visit me in my garden, an instant rapport sprang up between us. I showed her the poppy seedlings and told her about them. She is a writer, and she exclaimed, “That’s great! I think I’ll write that story.” 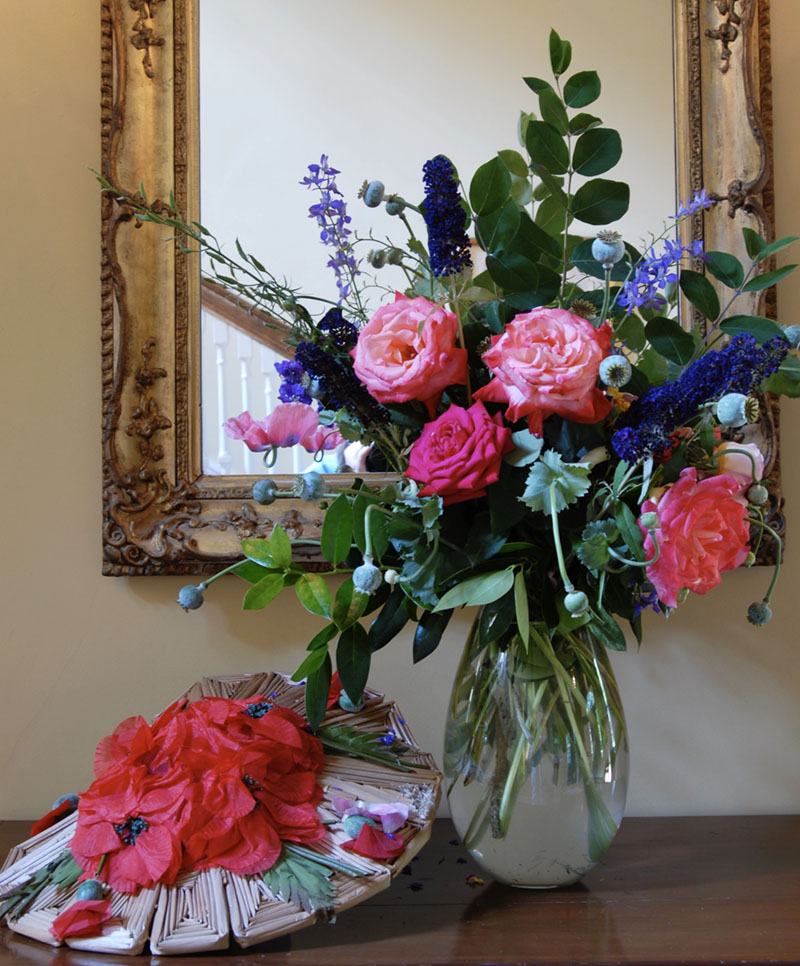 Beside a vase of poppies, larkspur, and roses, the author displays her grandmother’s straw hat with red poppy flowers and pods. 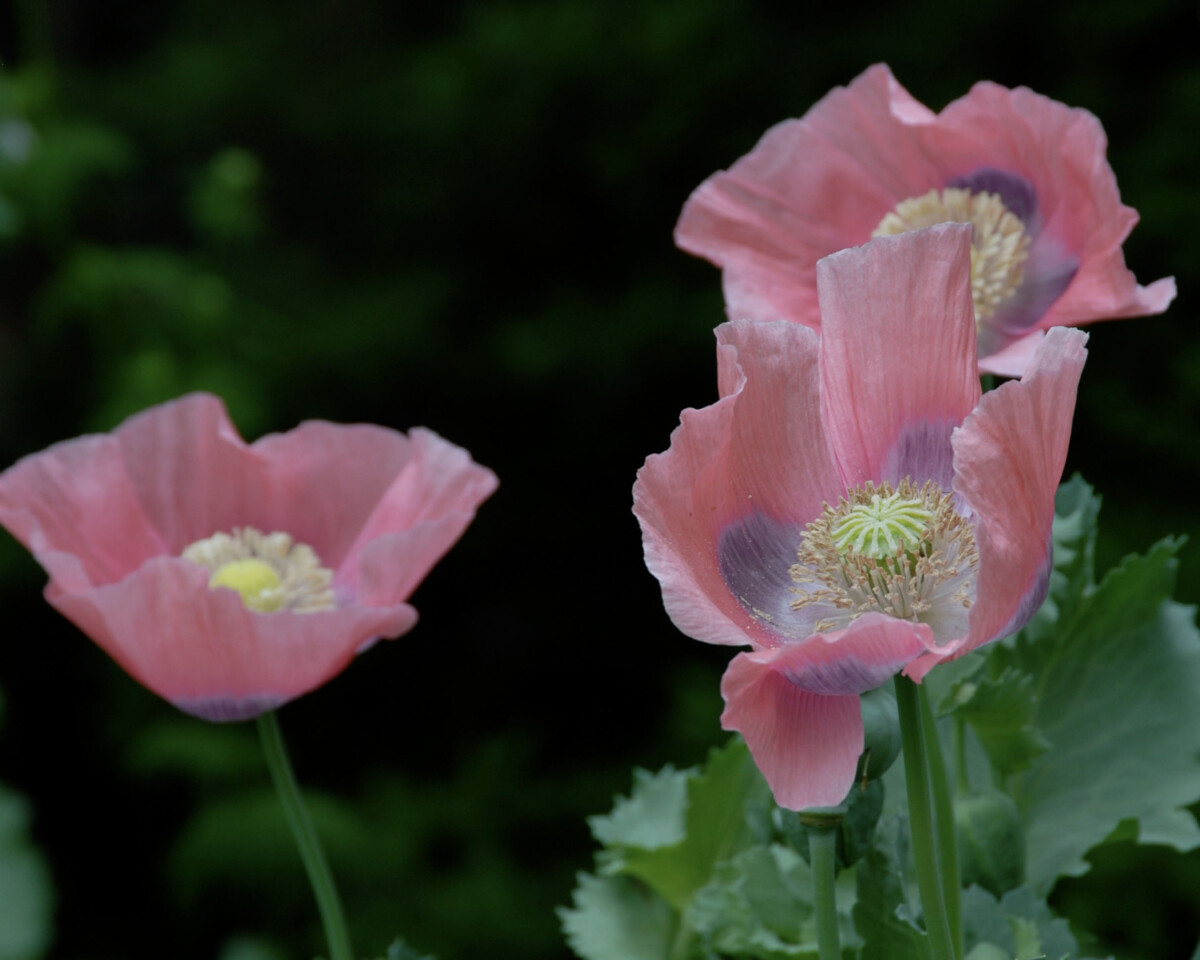 Author and gardening enthusiast Mary Walton Upchurch grew up in Montgomery, Alabama, and earned a degree in landscape architecture from the Harvard Graduate School of Design. For more than 30 years, she practiced in Montgomery as an award-winning landscape architect and wrote garden articles for a local publication. Now retired, she lives in western North Carolina where she built a home and garden on top of a mountain with panoramic views of the Blue Ridge Mountains.

More from this Author

Next post Setting Up a Fun & Festive Holiday Bar