After a fire destroyed their early 20th-century home, Patty B. and Dave Driscoll rebuilt their lives and their house, preserving the architectural bones while updating spaces to meld old soul with timeless style

Patty B. and Dave Driscoll were rushing to get out the door for the annual Lessons & Carols service at their daughter’s school. She was singing with the chorale ensemble, and the tradition is well known and well attended in Birmingham, Alabama. The torrential rain, darkness, thunder, and flashes of lightning added to the sense of urgency. But once comfortably seated in the church, where the crowded bodies and the flicker of candlelight muted the violence of the storm, they settled in to welcome the Christmas season and experience the beauty of the service. Then a friend showed up and beckoned them to the side aisle. Lightning had struck; their house was in flames.

What followed was a mad dash in the unrelenting downpour, a dramatic search for beloved pets—all of which were saved by heroic fire crews—and a steady stream of friends and family who brought umbrellas and sweaters and a warm embrace of support and strength. “People asked us that night if we were going to rebuild,” says Patty B. “We never considered anything else.” This was their forever home. At the same time, they were thinking, weighing their sentimental attachment to the house against their desire to make the reconstructed house a better version of itself.

They went with the latter. The Driscolls’ approach, once they met with architects Liz and John Carraway, was to use the saved bricks and recreate the house but do a few things on their “if we ever remodel” list: expand the kitchen, create a proper master bath, build an easier access to the front of the house, and make the pool more suited to their lifestyle.

They reached out to designer Mary Evelyn McKee, who initially stepped in to help the couple sort what to keep and what was beyond repair. “After we went to their storage facility and saw how much they’d lost, I knew they needed to rebuild their lives with art and furniture that could mean as much to them as what they’d lost,” says Mary Evelyn. Patty B. is a fine artist who studied at Skidmore, the California College of the Arts, and the Florence Academy of Art, among others, with an understanding of craftsmanship that goes beyond the everyday appreciation for beauty. She knew that what her family lost in the fire could not be replaced, but with Mary Evelyn’s help, they could create new memories. They got to work replacing furniture; swooning over fabrics; scrutinizing trim, tape, and fringe; studying—with scholarly intensity—wallpapers and paint colors; and debating light fixtures.

“I got a feel for her palette,” says Mary Evelyn. “Patty B. gravitates toward pretty colors that are flattering and that look particularly good in that extraordinary light.” In fact, Patty B.’s paintings often have some reference, whether literal or more abstract, to the David Austin roses that she and Dave have grown for years.


“We’ve tried other roses, but these are beautiful, and the pink and lilac varieties are the best,” says Patty B. In her recent work, roses are metaphors for feminine grace and resilience, which are often taken for granted. Her art is a celebration of heritage, tradition, and fortitude. Calling on these traits, she devoted a year to slowly restoring her home, evaluating, culling, and visiting auction houses and design centers across the country and in England.

All the while the Carraways were working on the architecture. “The kitchen had been redone in the ’90s,” says Liz, “but there were still flaws that needed to be fixed: a weird basement access, a small kitchen, a closed-off study. We cleaned up the back of the house, upstairs and down. Now it feels open and seamless,” she says.

The master bedroom proved to be another challenge. “There was no light,” says Liz. “Still it was beautifully quirky. We lost a window that looked out on a ho-hum deck and created a bay. They had to trust us; it was a leap of faith for everyone that it would not kill the original complexion of the house.” The result is a cool, light-filled space that leads to a luxurious bath and laundry room.

The entire rebuild was a leap of faith that, despite the loss, kept the Driscolls believing that they would get their house back. Now, the “before the fire” memories get tangled up with postfire recollections, suggesting that the team got it right. Their house is just as it was before the fire, except that it now functions for a 21st-century family with adventurous pets, travel-loving children, and steadfast owners who had the optimism, energy, and creativity to see it through.

More of the Driscoll House 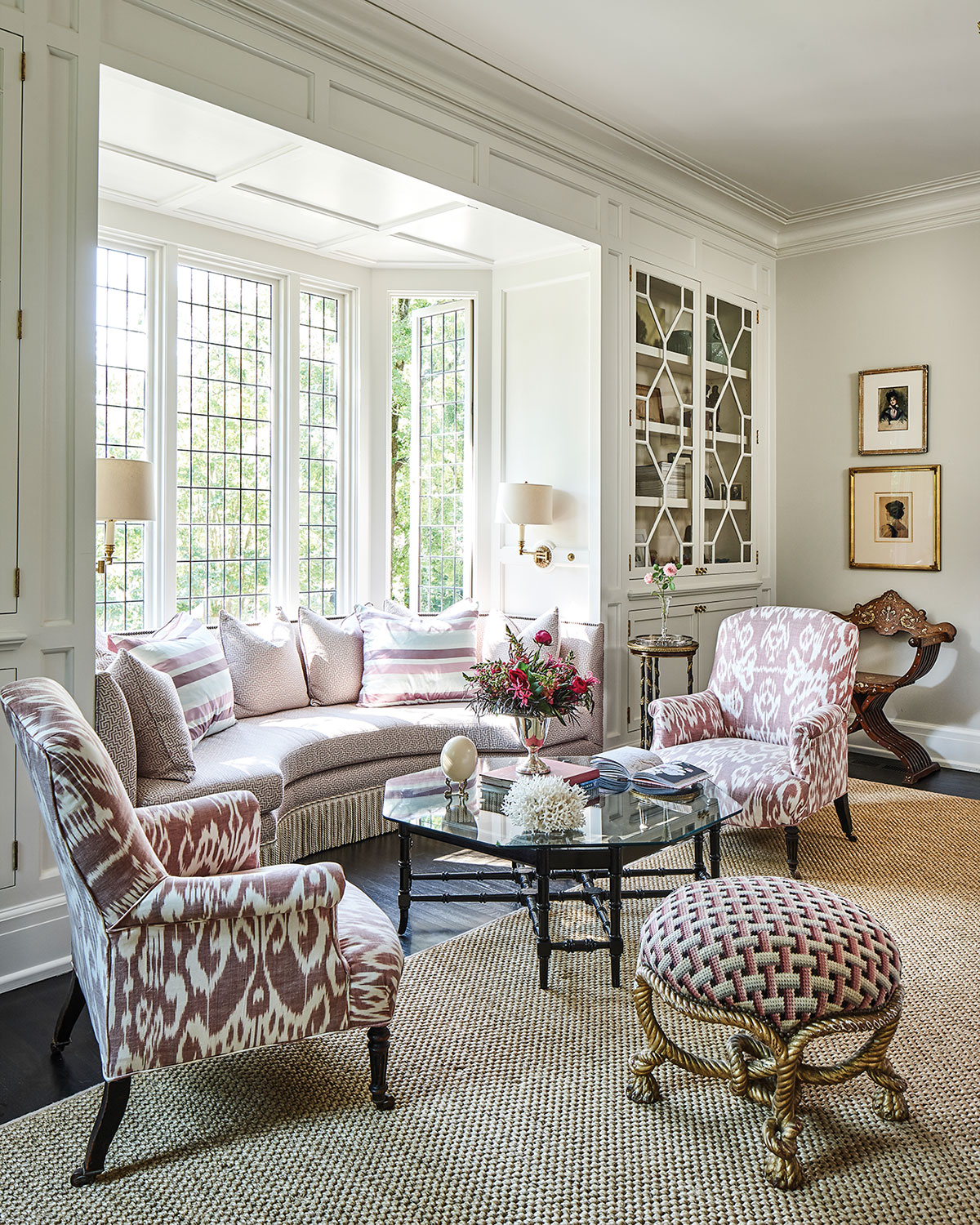 A custom banquette is dressed in Nancy Corzine fabric with bullion fringe from Samuel & Sons. Patty B. bought the needlepoint Napoléon III twisted rope stool at auction. Architect Liz Carraway drew a Chippendale-inspired fretwork design for the glass doors on the bookshelves. 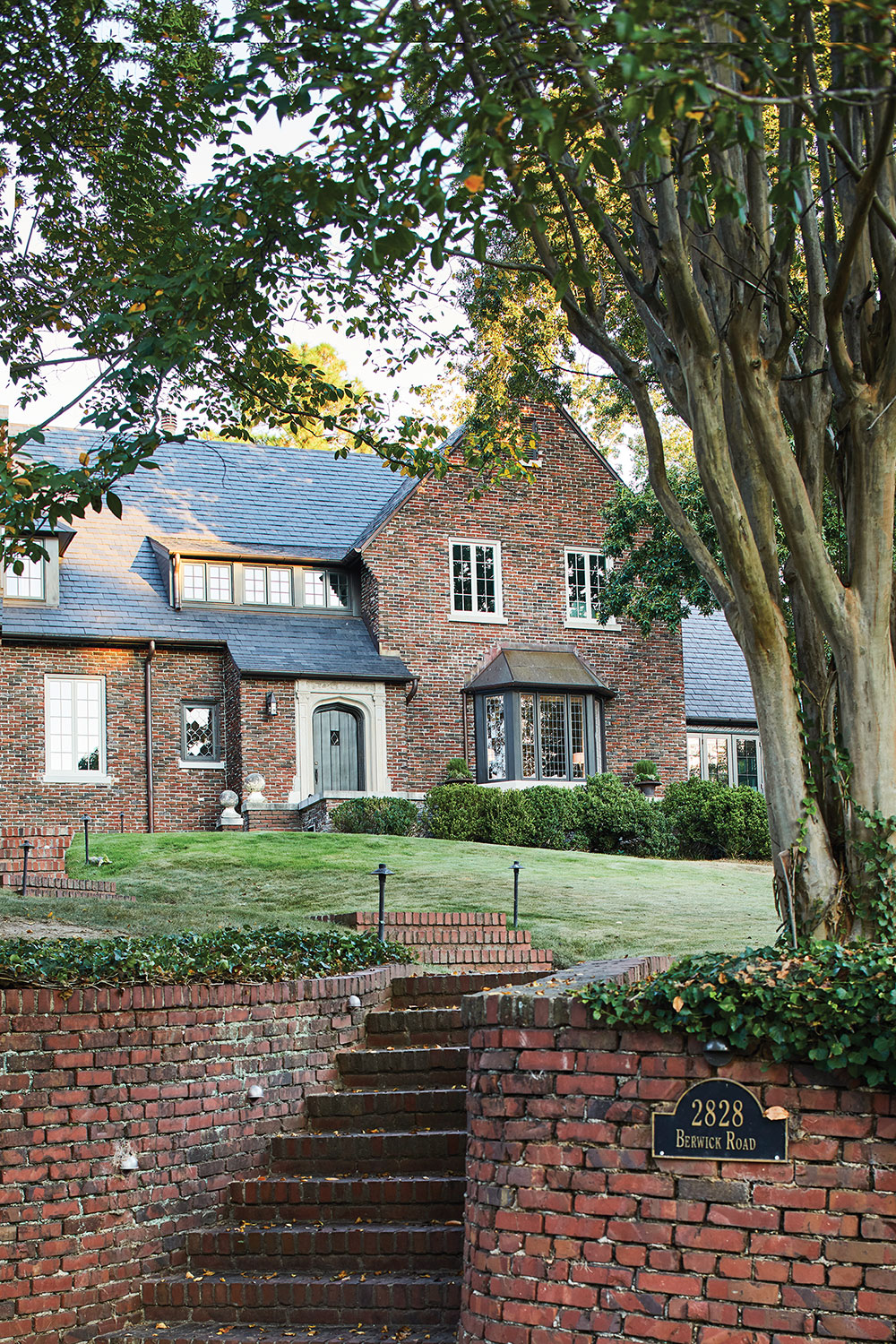 The stately façade of the 1925 house 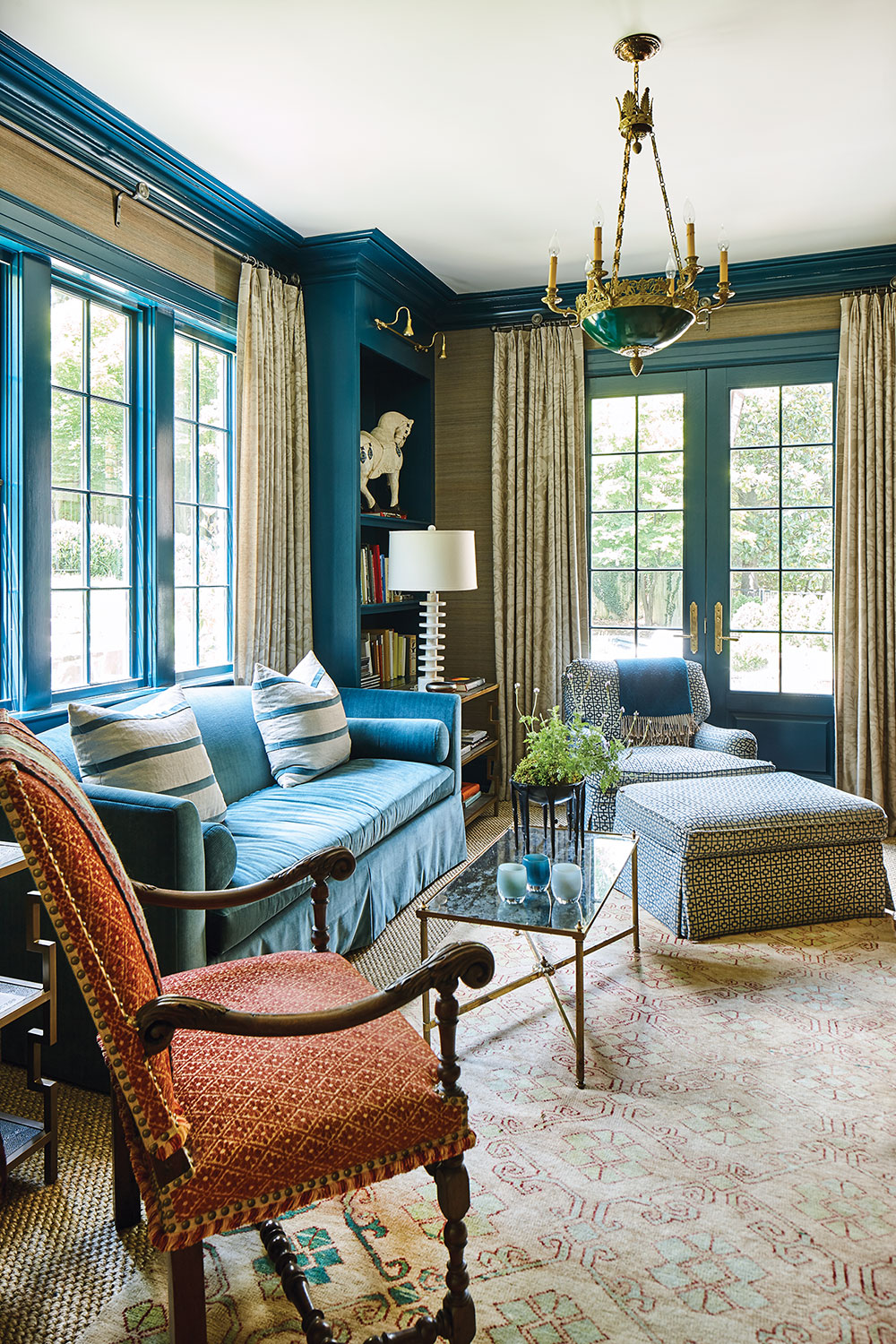 The acquisition of the white horse on the bookshelves in the study was inspired by the Sudduth painting. 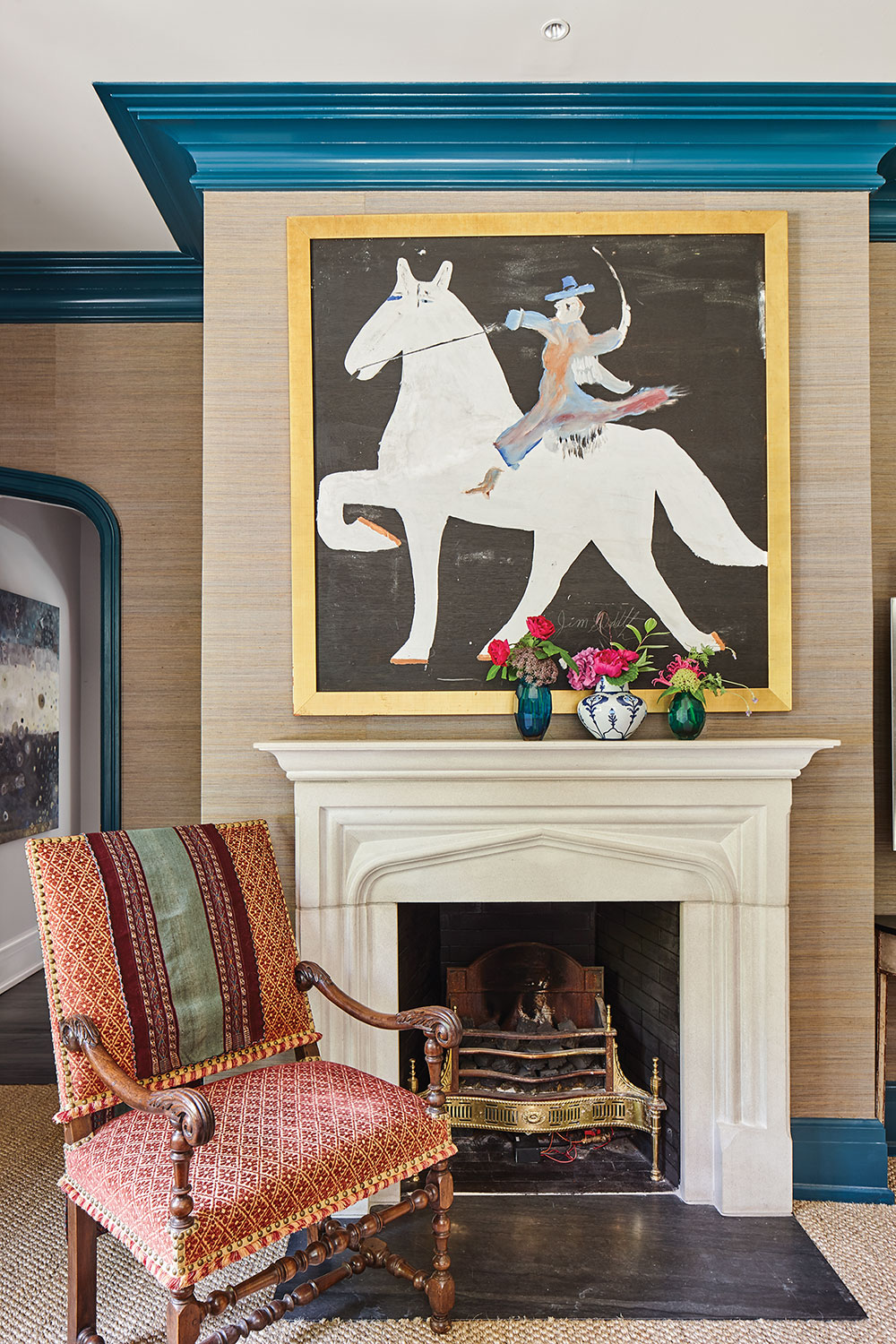 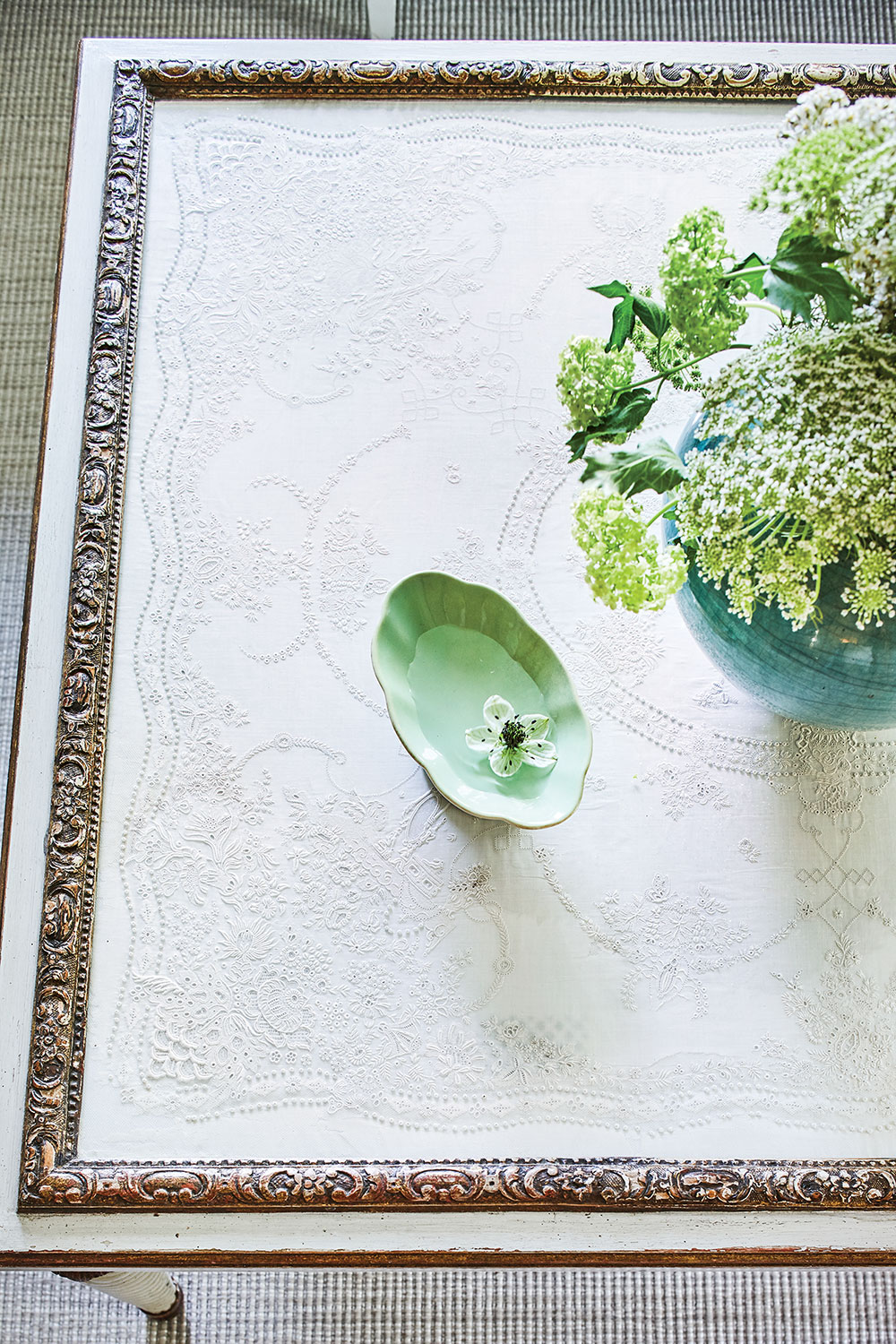 The coffee table came from the auction of Bunny Mellon’s estate. 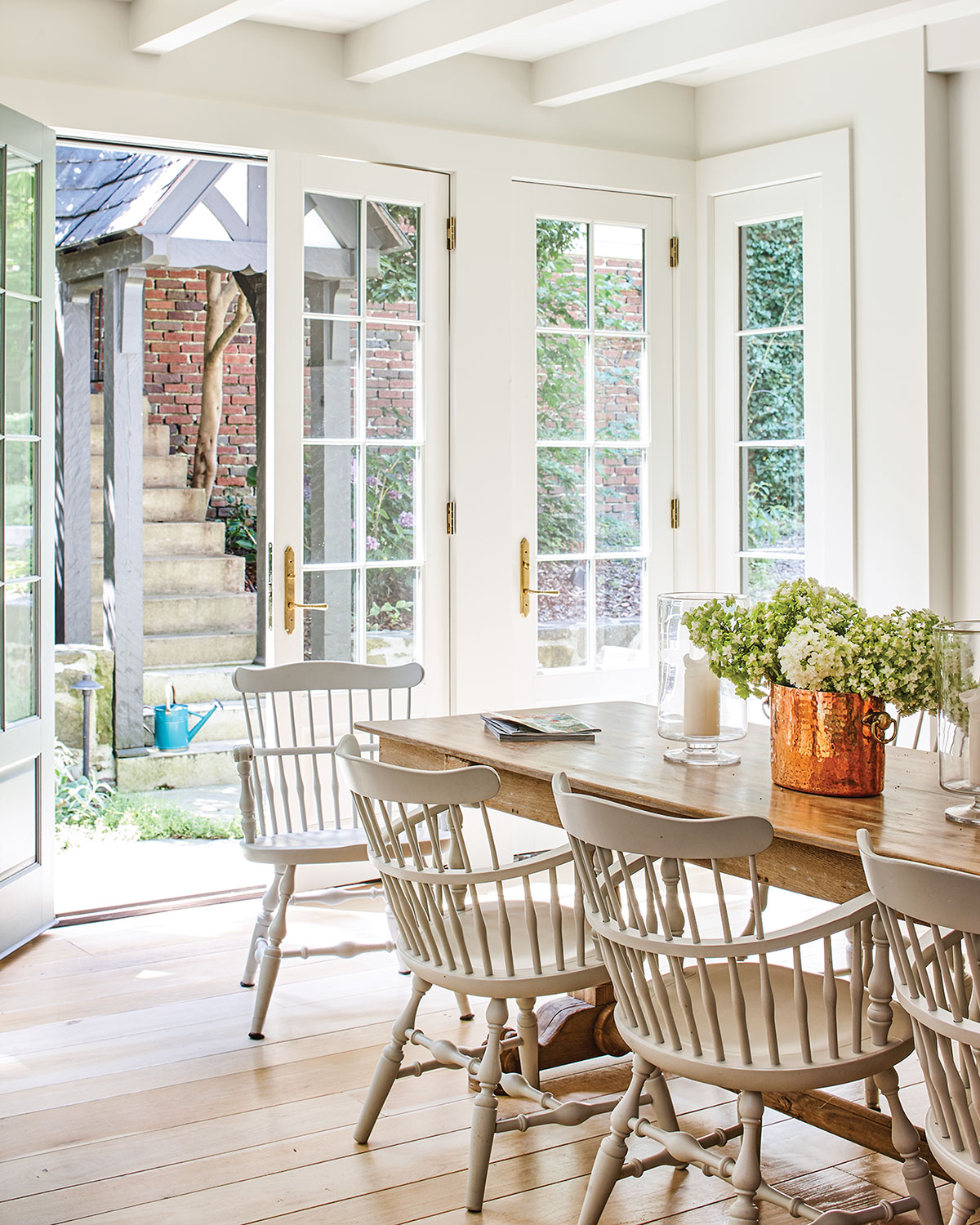 The long farm table looks out on Dave’s herb garden. 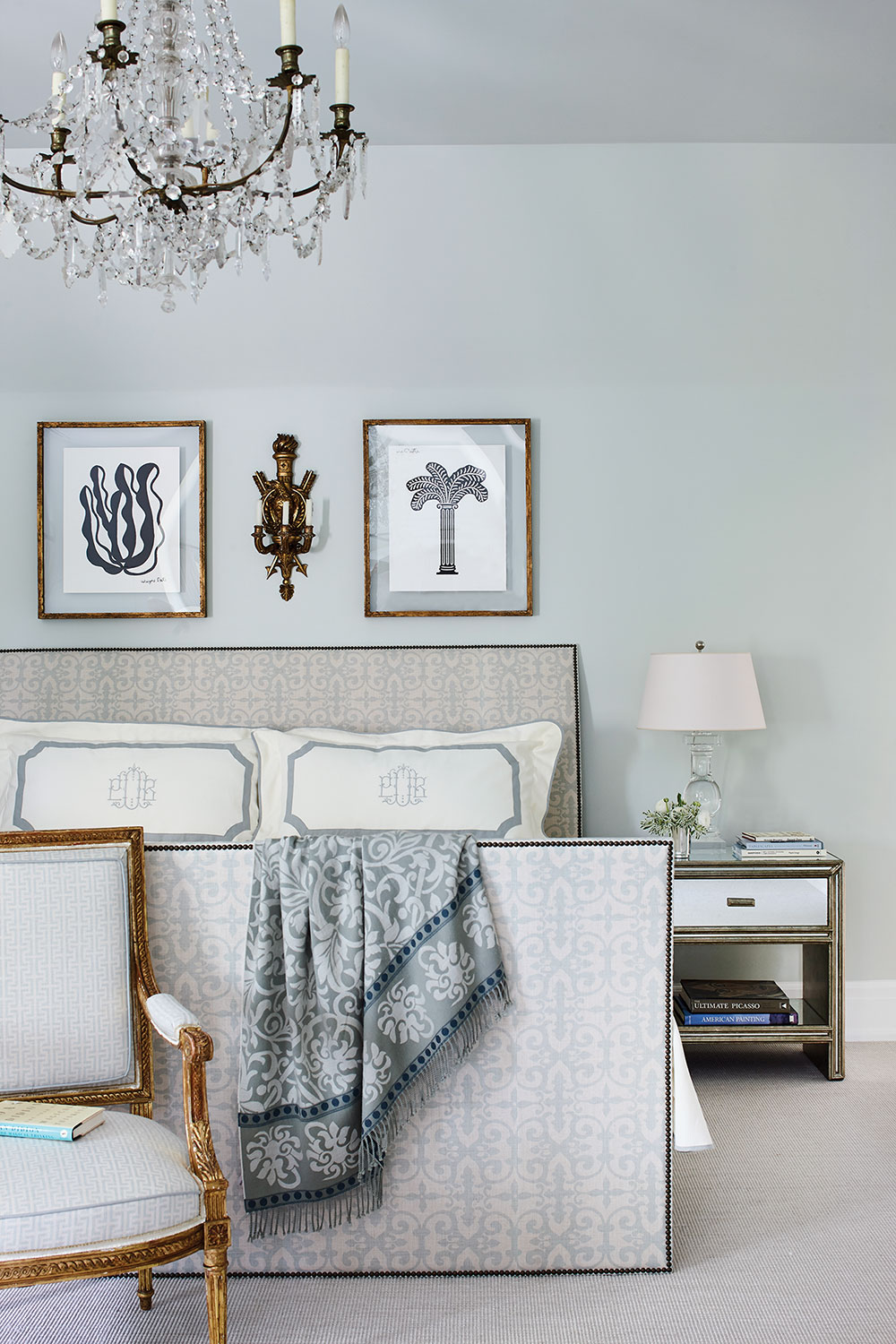 “[Farrow & Ball’s] Pale Powder started it all,” says Patty B. of the master bedroom’s calming color. “I’ve used it at every house we’ve lived in.” 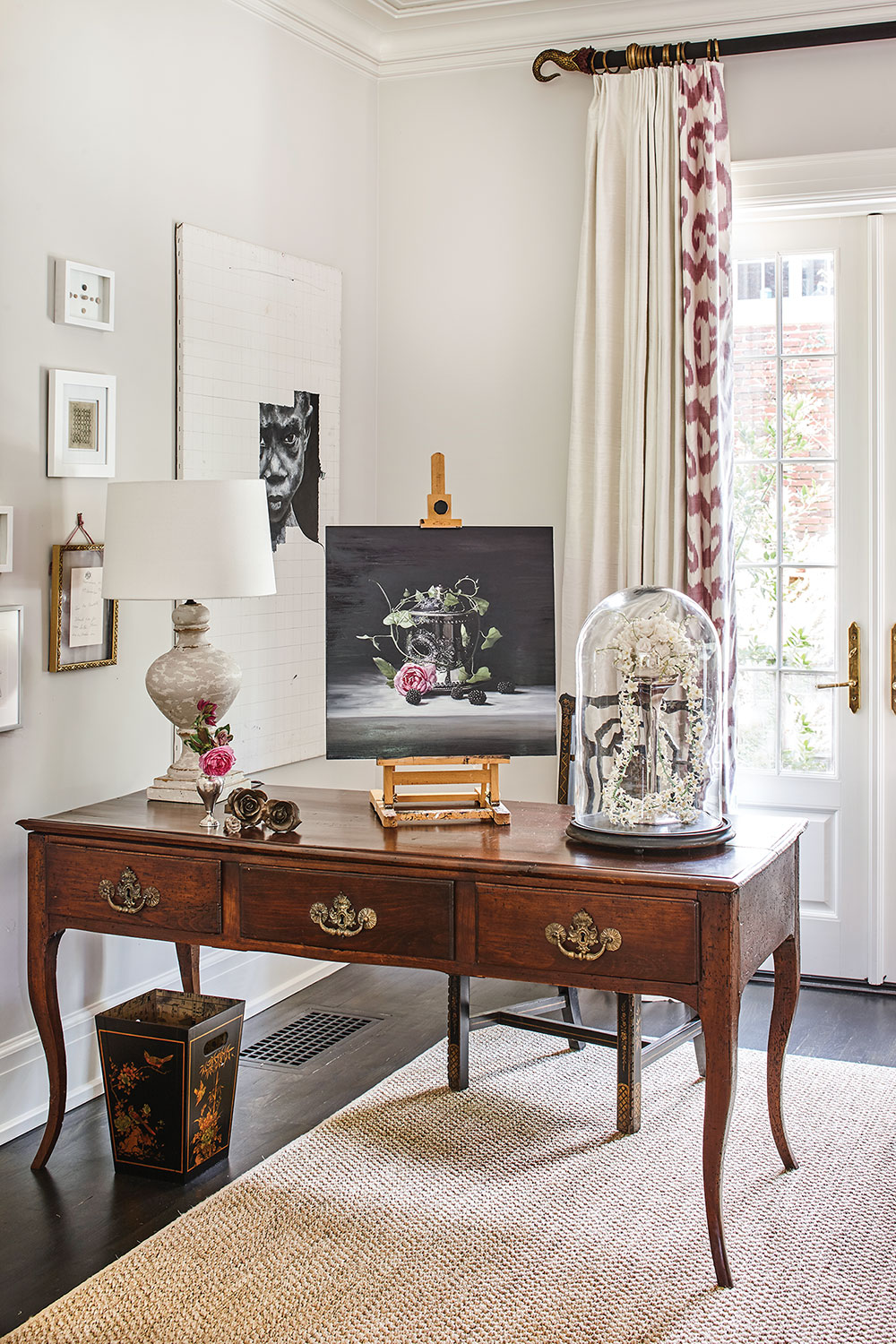 A writing desk displays Patty B.’s painting Haughty and the preserved pastillage cake topper that she made for her wedding in 1997. 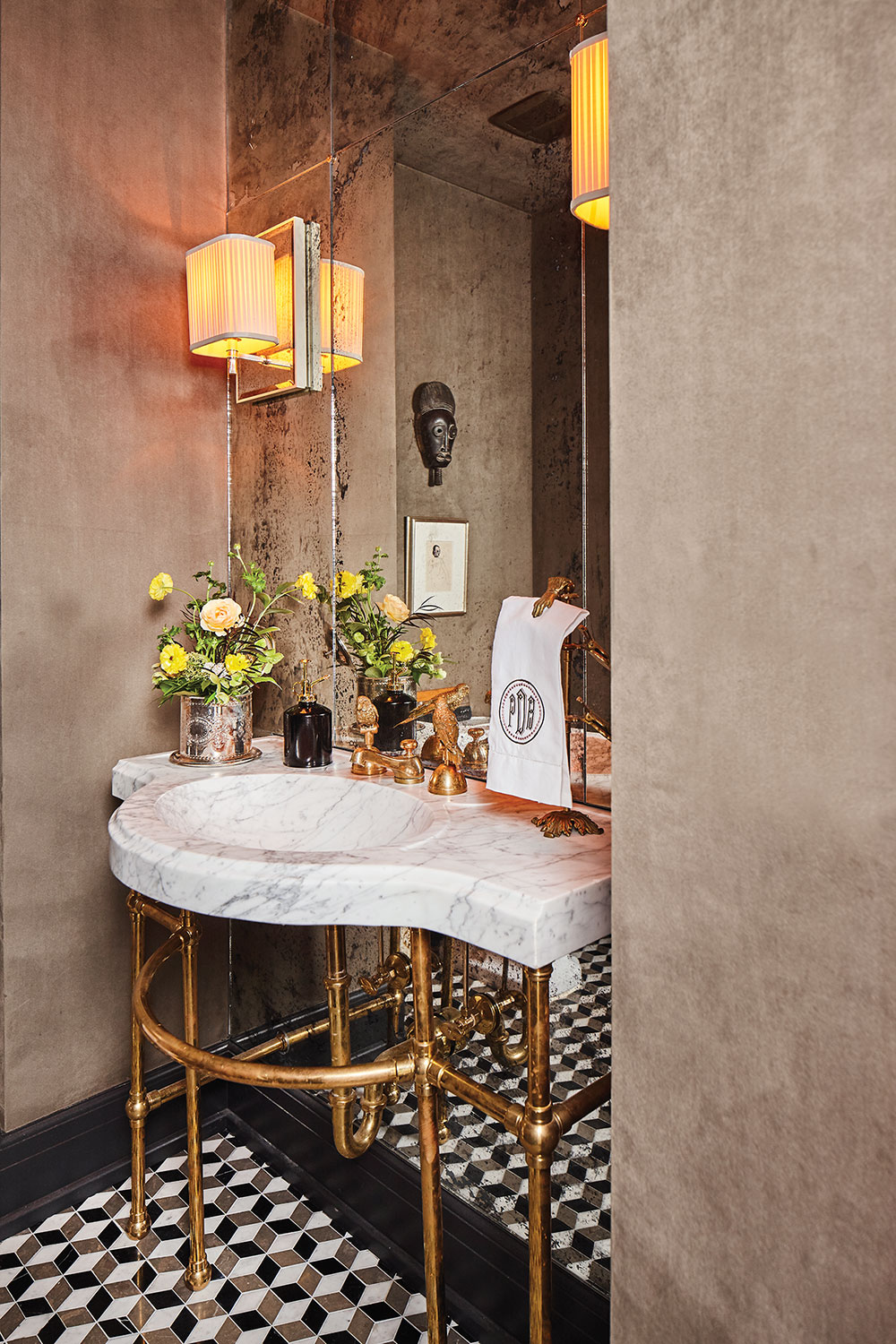 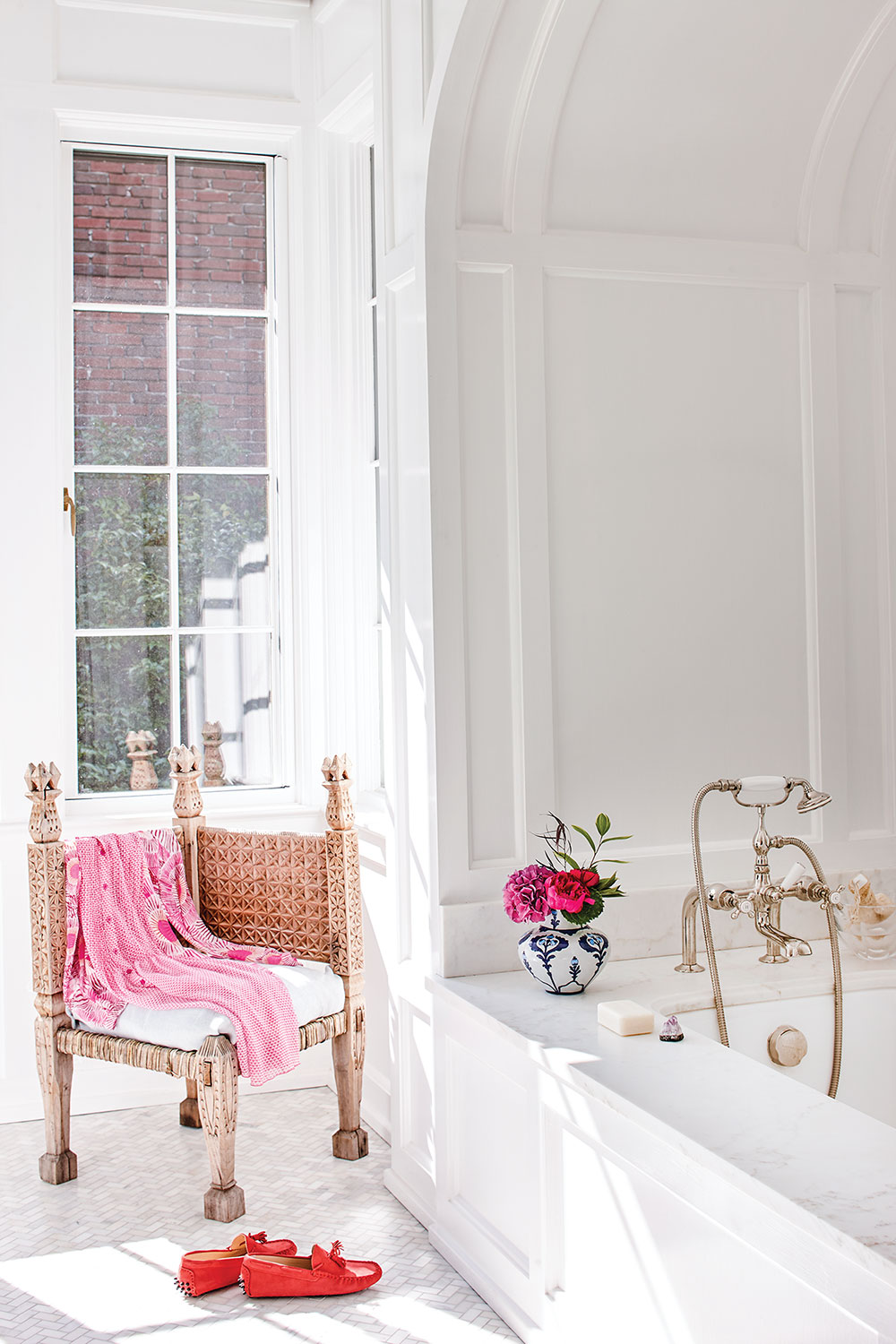 The Carraways expanded the master bath and created a paneled niche for the tub. The Afghan chair provides perching and stacking space. 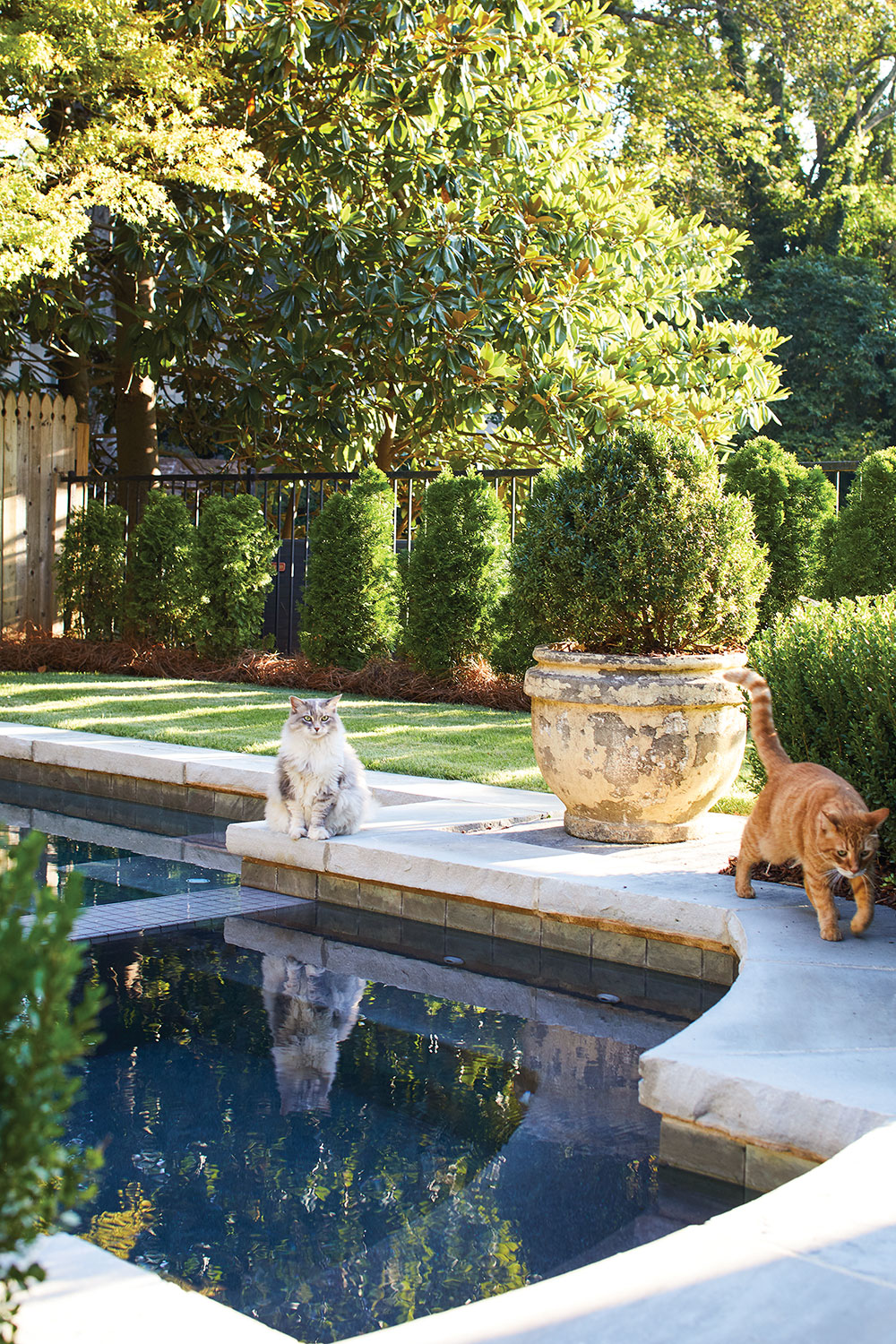 “During the renovation, we cut the pool in half and filled it in so we’d have more garden space to plant and entertain,” says Patty B. 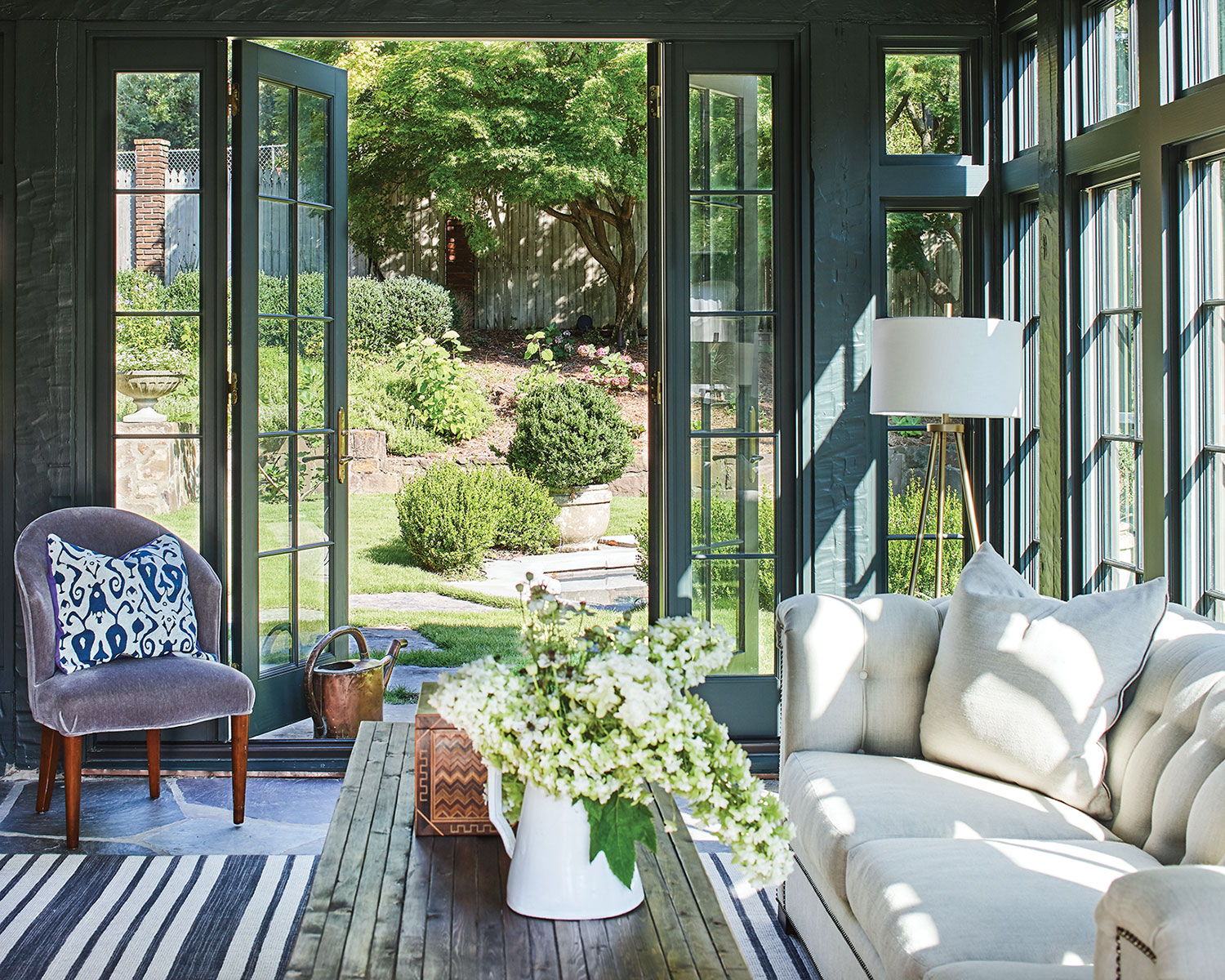 Carraway suggested shallow mullions that frame the panes in the sunroom. Screens descend from the ceiling to block the sun when needed.