Delight in Derbyshire (Plus, Where to Stay)

Dramatic scenery and legendary estates within England’s Peak District National Park lure visitors to Derbyshire. Explore the grounds of Chatsworth and Haddon Hall, and find well-appointed accommodations for your stay.

Crenelated 12th-century Haddon Hall perches on thick ramparts anchored on a limestone out­cropping above the River Wye in Derbyshire. Dubbed “the most important English house to survive from the Middle Ages,” it lay dormant for 200 years, from the 1700s until the 1920s, when it was restored.

Part of the duchy of Rutland, the 3,800-acre estate is owned by the present duke’s younger brother, Lord Edward Manners, who resides there with his young family. Today, happy shouts of energetic twin sons reverberate through passages, effectively erasing the Reformation’s darkness. But whispered tales recount the daring elopement of Dorothy Vernon, a Catholic, with Protestant Sir John Manners. Centuries later, their love story still resonates when one views the sweeping outdoor staircase that she supposedly used to escape from her disapproving father.

“When you arrive at Haddon, you’re immediately struck by its formidable surrounds. It appears very masculine in its nature. However, when you walk through the gardens, you experience its breathtaking femininity. It is unbelievably beautiful and romantic, a real place for reflection.”—Lady Edward Manners

St. Nicholas Chapel showcases restored frescoes con­cealed by whitewash during the Reformation, while the Long Gallery boasts intricate plasterwork. The glory of Haddon Hall, however, is in its gardens, where you can smell the roses that dominate terraced beds, cascade down ancient façades, and frame doorways in frothy blooms.

This triumph of harmony and texture was orchestrated by landscape architect Arne Maynard, who led Haddon’s 2011 garden revival. With romance and respect for history as his mantra, Maynard was guided by photographs of the garden planted by Lord Manners’s grandmother in the 1920s. “Its softness and romance had disappeared, and I wanted to capture that again,” Maynard says.

His intended palette of pale pinks, blues, and creams evolved as stiff hybrids were replaced by favorite roses, del­phiniums, lilies, fruit trees, topiaries, and native Derbyshire orchids. Beyond the terraces, meadow-style planting attracts wildlife and butterflies. An Elizabethan knot garden displays plants popular 400 years ago, along with medicinal plants and those once used for dying cloth. “The gardens now have a freshness, referencing an Elizabethan past but retaining a contemporary feel,” says Maynard.

Recently, Lady Edward Manners reflected on the joys of living here. “With Haddon Hall’s heritage status, it is our job to maintain and preserve this wonderful building for current and future generations to enjoy. Every owner of Haddon has loved gardening and left their indelible mark on this very special landscape, and we plan to do the same.” 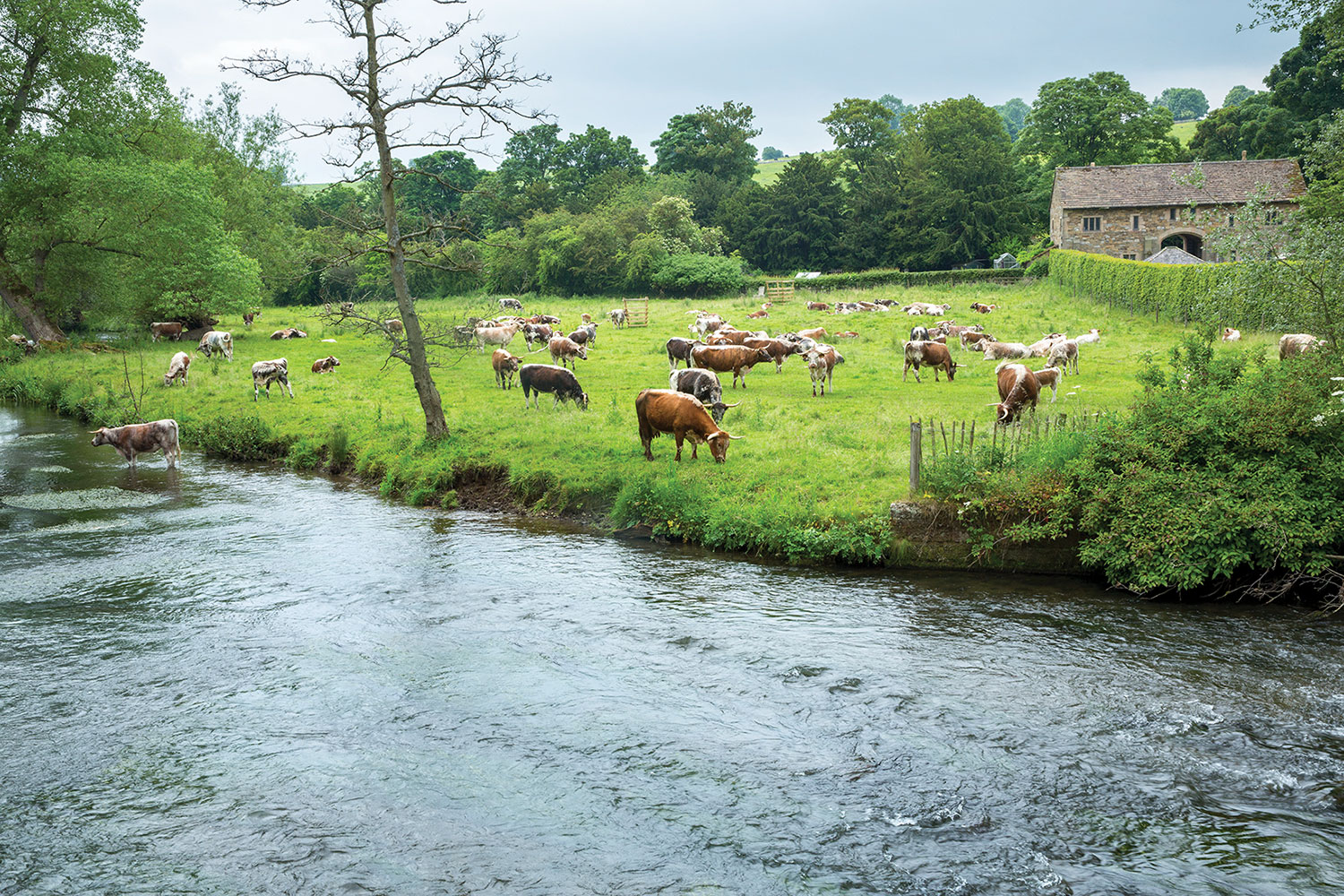 Farmland with English Longhorn cattle along the River Wye. Photo by Marianne Majerus 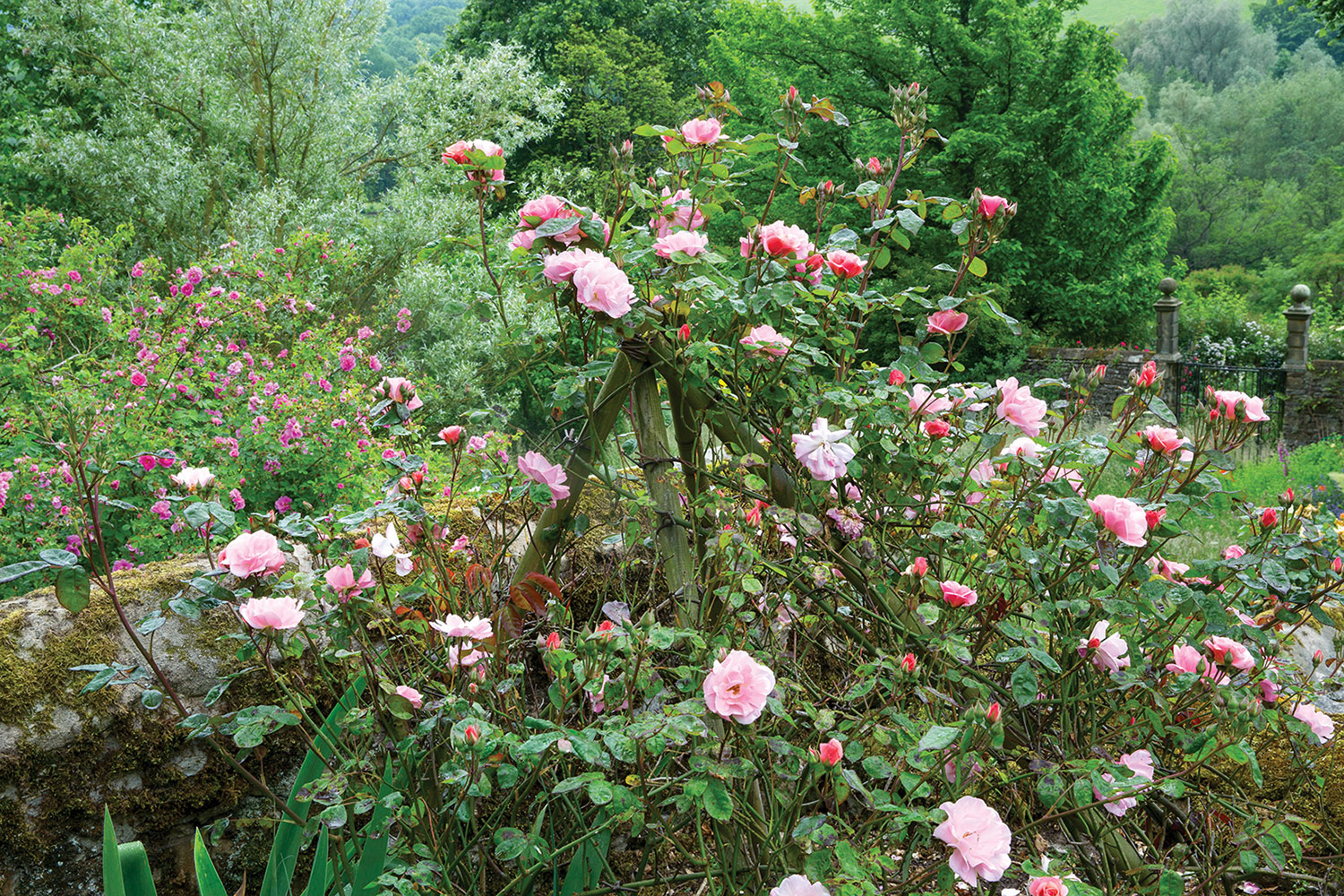 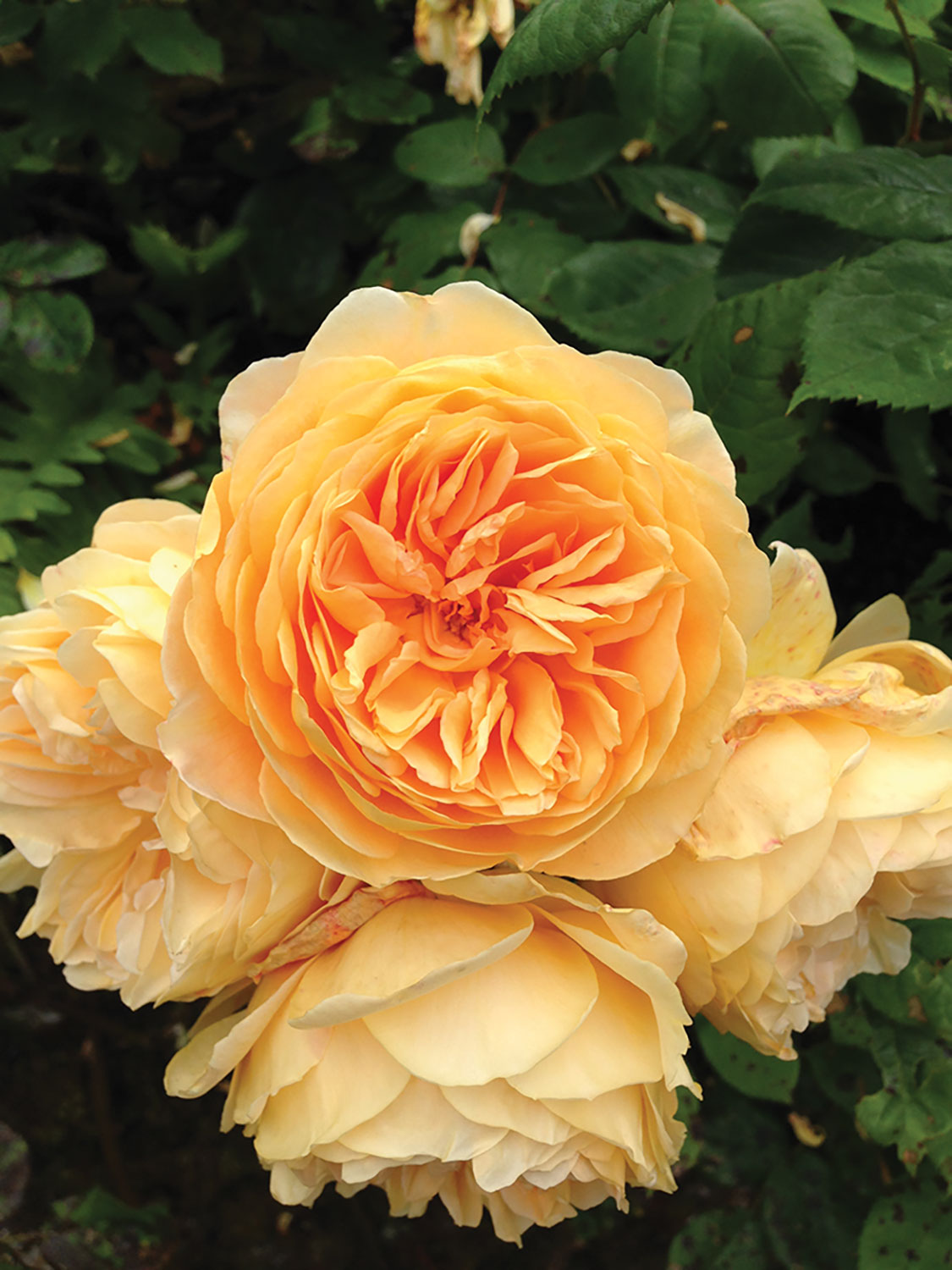 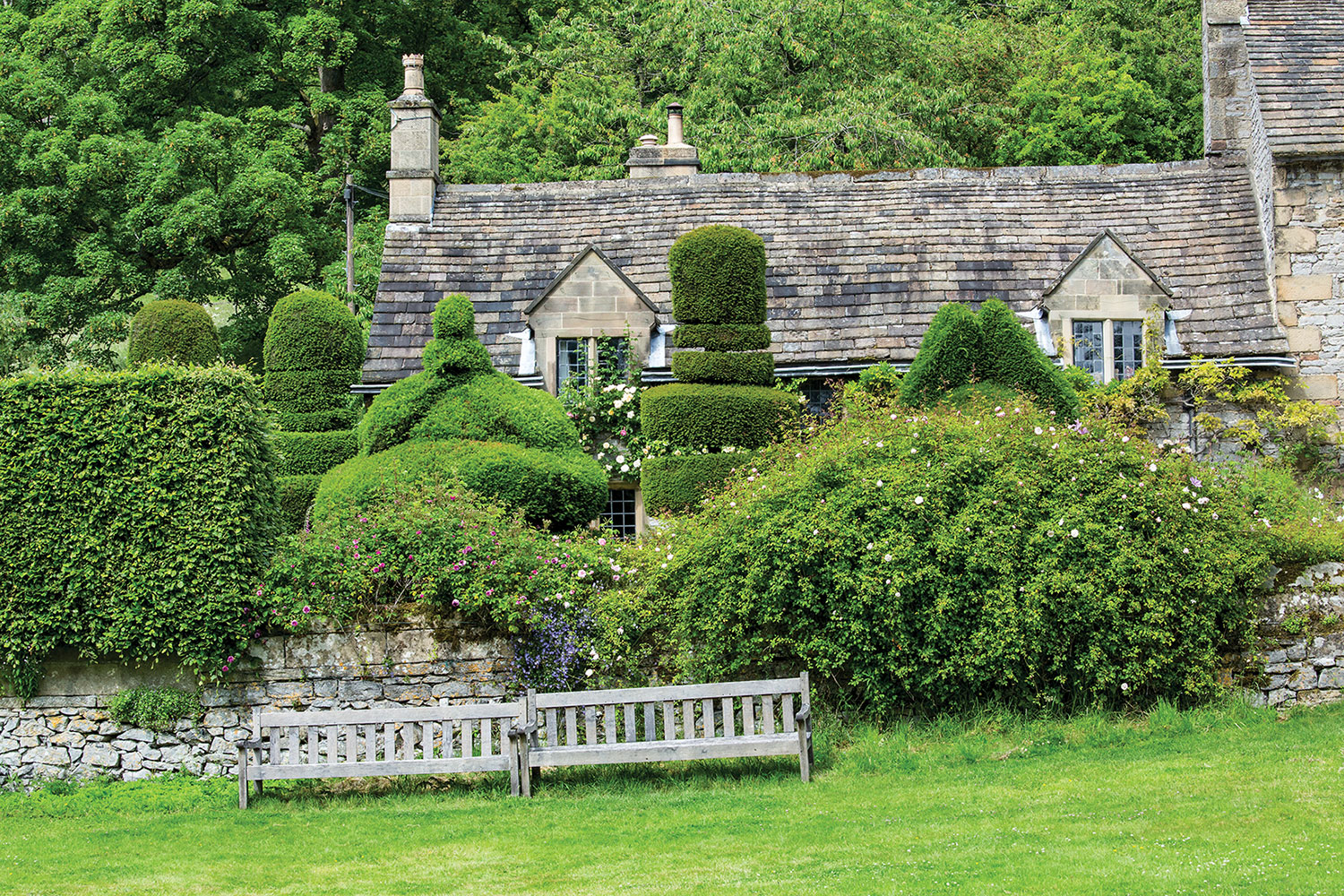 At first glance, Chatsworth House appears as a misty mirage, mirrored in the River Derwent, which bisects its 1,000-acre park. Aristocratic and aloof, the Elizabethan house is flanked by stables, greenhouses, gardens, grottoes, and mazes. A squat moated tower named Queen Mary’s Bower is a reminder that Mary Queen of Scots was once held there in the 1570s.

With its powerful persona, the main house teases with architecture that celebrates greatness. Despite centuries of tinkering by 12 Dukes of Devonshire, Chatsworth maintains its stately presence. The landscape high notes, developed by Capability Brown in the 18th century and Joseph Paxton in the 19th, delight with tranquil vistas, studded with bridges, hidden follies, and water features. The Emperor’s Fountain jettisons 300 feet into the air, and the Cascade tumbles 200 feet over a series of 24 irregularly positioned stone steps, emitting differ­ent sounds at each landing.

“Chatsworth was described in the 17th century as a jewel, and a jewel it remains, making neighboring Haddon Hall all the more remarkable,” says British garden scholar and author John Phibbs. “How can it be that two great ducal houses should be a stone’s throw from each other?”

Over a million annual visitors stroll footpaths or ride around on a tractor-pulled train, exploring dozens of horticultural treasures, including the Arboretum of mighty specimen trees. The 1st Duke’s Greenhouse and Canal reference the distant past, while Azalea Dell and the Rose Garden were created in the 1930s, and the Cottage Garden, in 1989. Inside, more than 30 rooms are on display, showcasing antiques and restored masterpieces by Van Dyck, Reynolds, Sargent, and Rembrandt, as well as contemporary artists such as Lucien Freud and David Nash.

Today, the owners of both Chatsworth and Haddon Hall offer workshops, tours, and special exhibitions each season, enticing visitors to linger in Derbyshire. Book rooms in one of the superb country inns and cottages on or near the properties, and indulge in your good fortune. 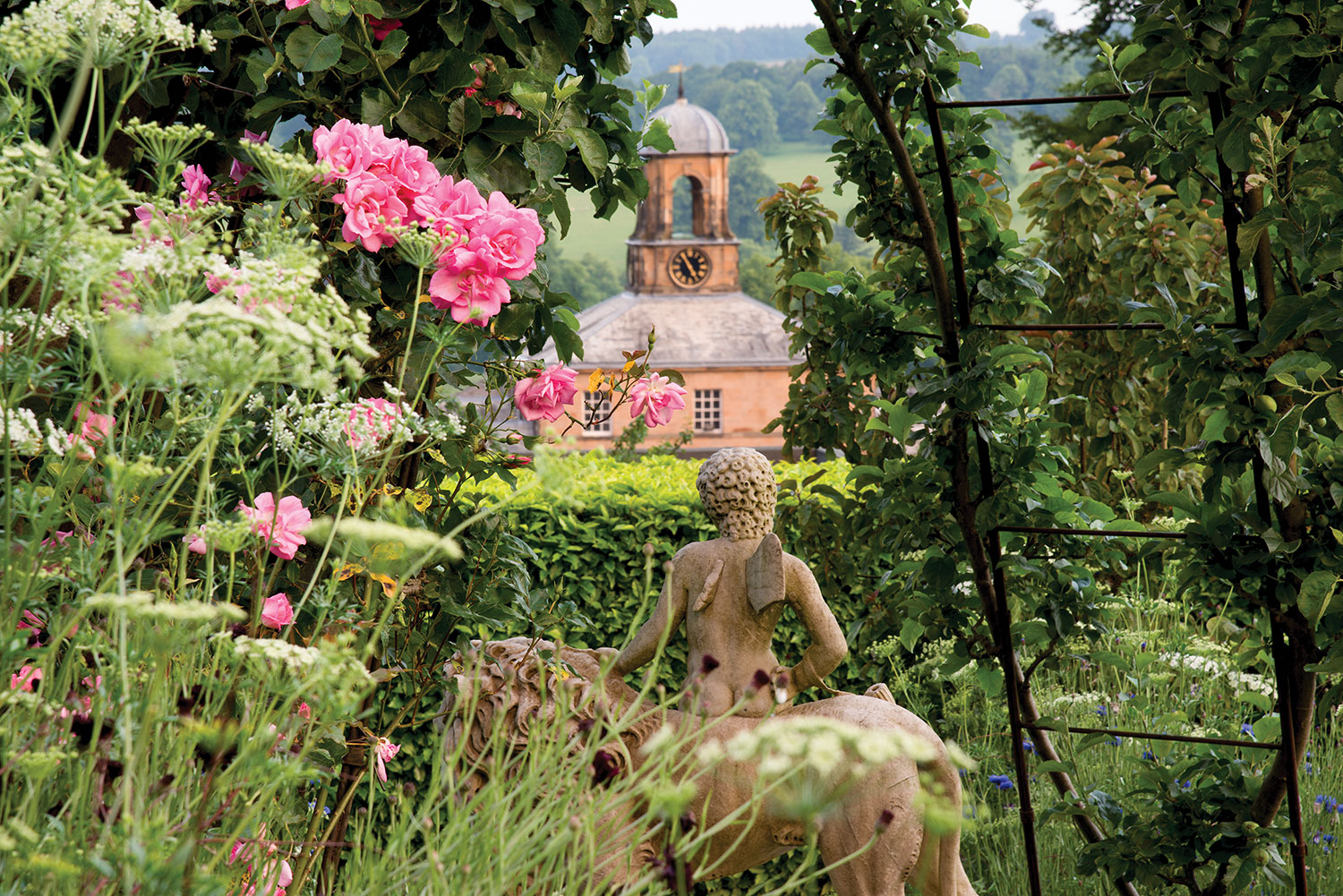 The magnificent Stables were built in the mid-1700s according to James Paine’s designs. Photo courtesy of Chatsworth House 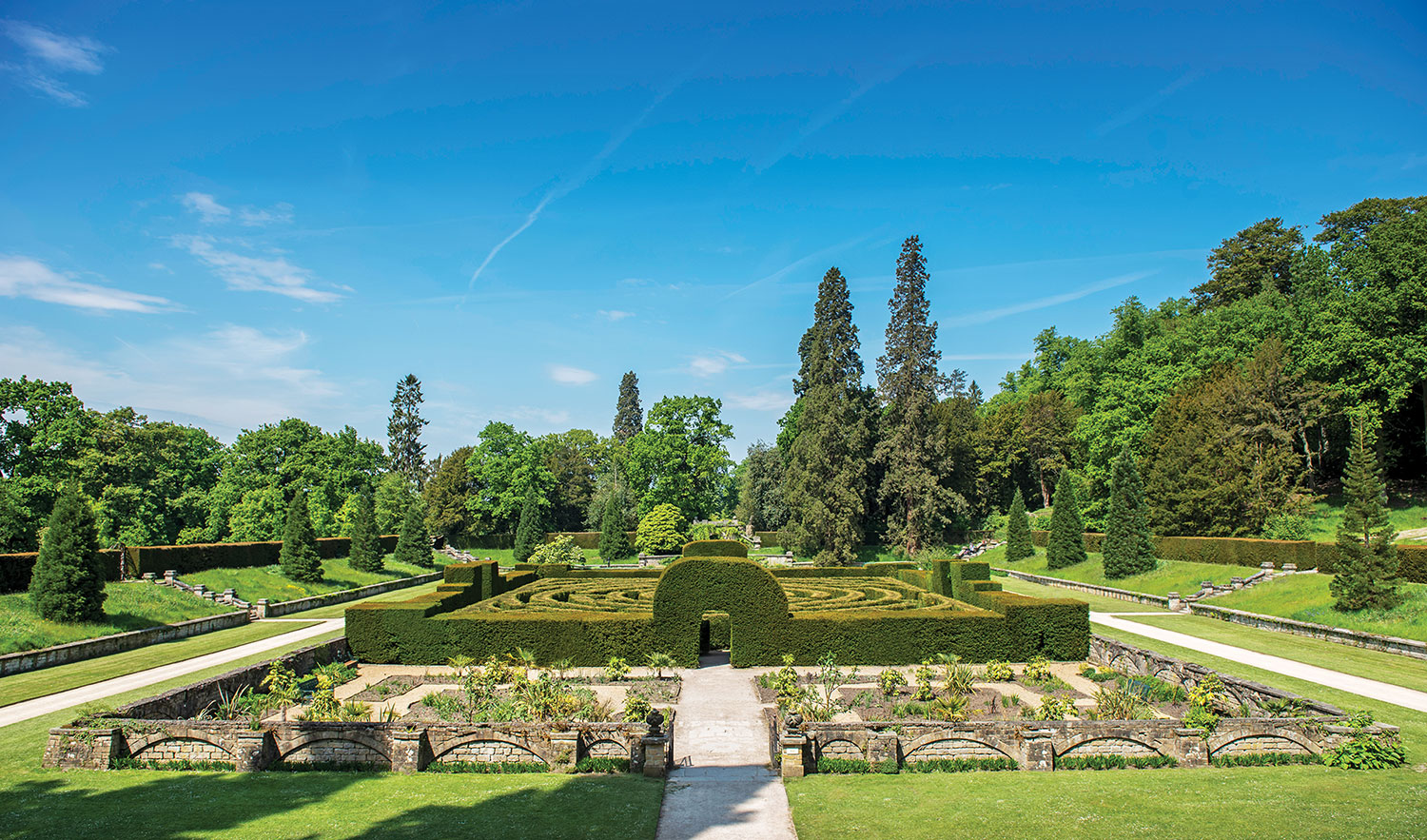 The Maze, planted in 1962 with 1,209 English yews on the site of Paxton’s enormous 1840s Great Conservatory, is a favorite of visitors. Photo courtesy of Chatsworth House 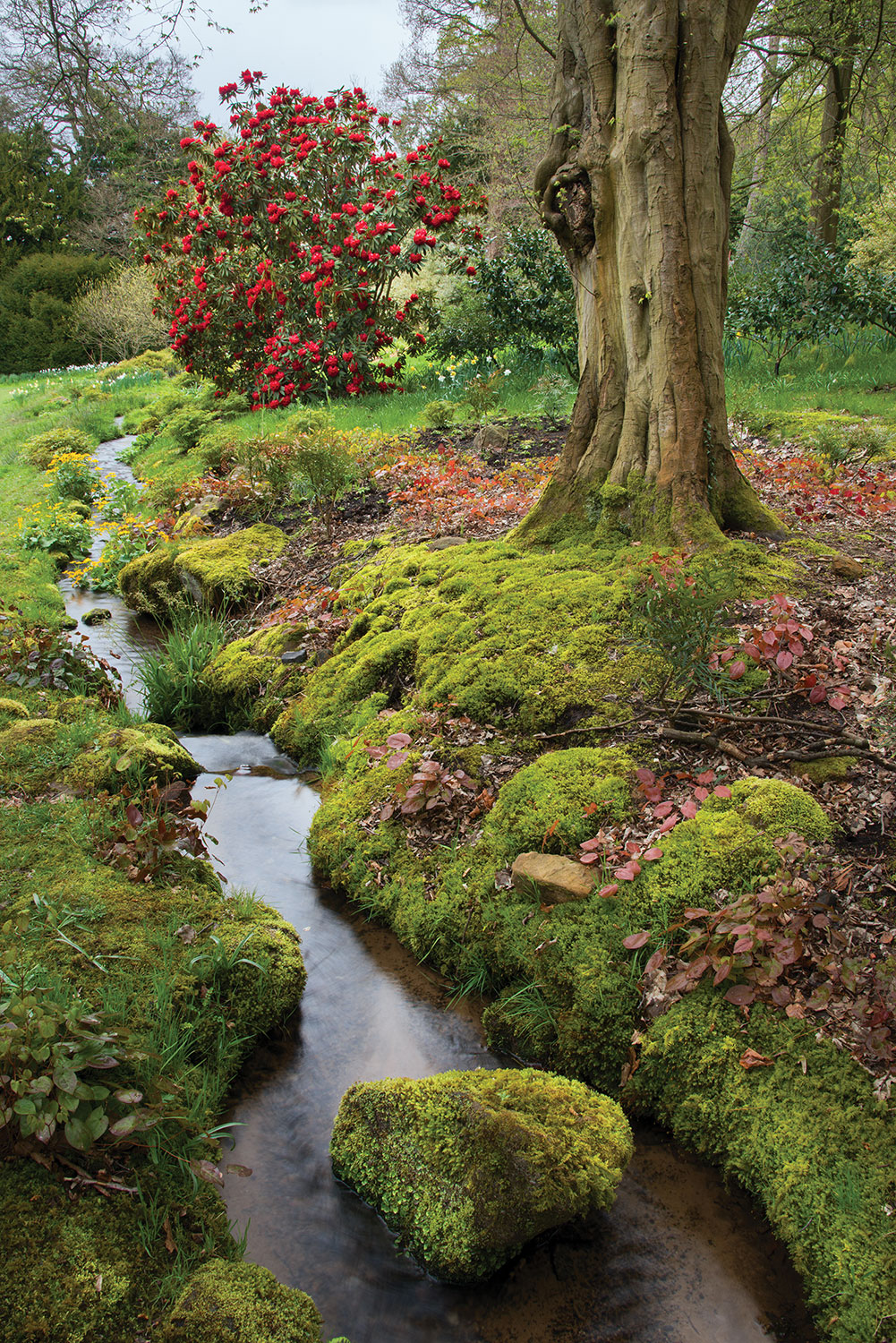 The Trout Stream gurgles along moss-and-lichen-covered rocks and banks in the Arboretum Walk. Photo courtesy of Chatsworth House 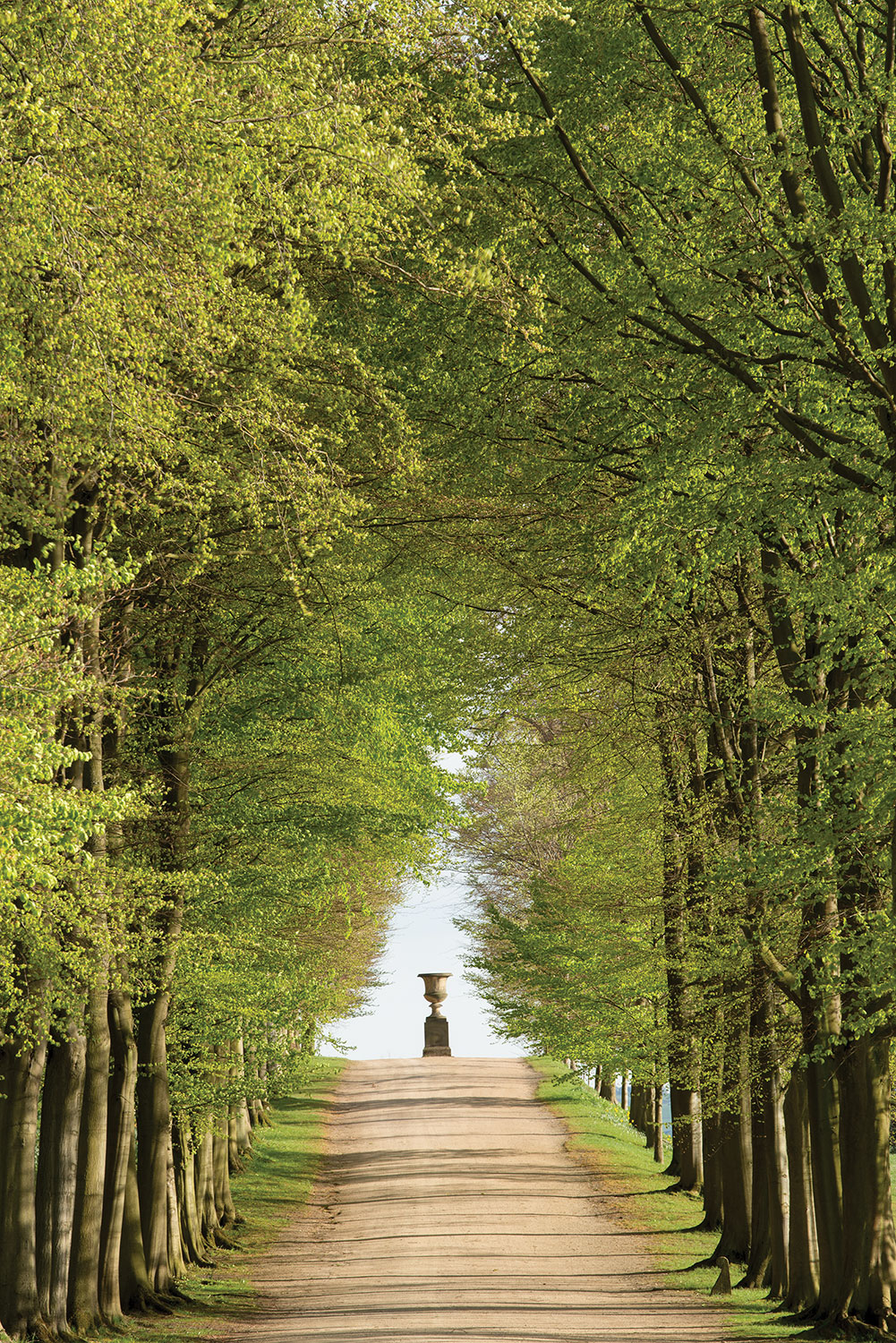 The Broad Walk culminates in an urn created in 1820 by Jeffry Wyatville. Photo courtesy of Chatsworth House 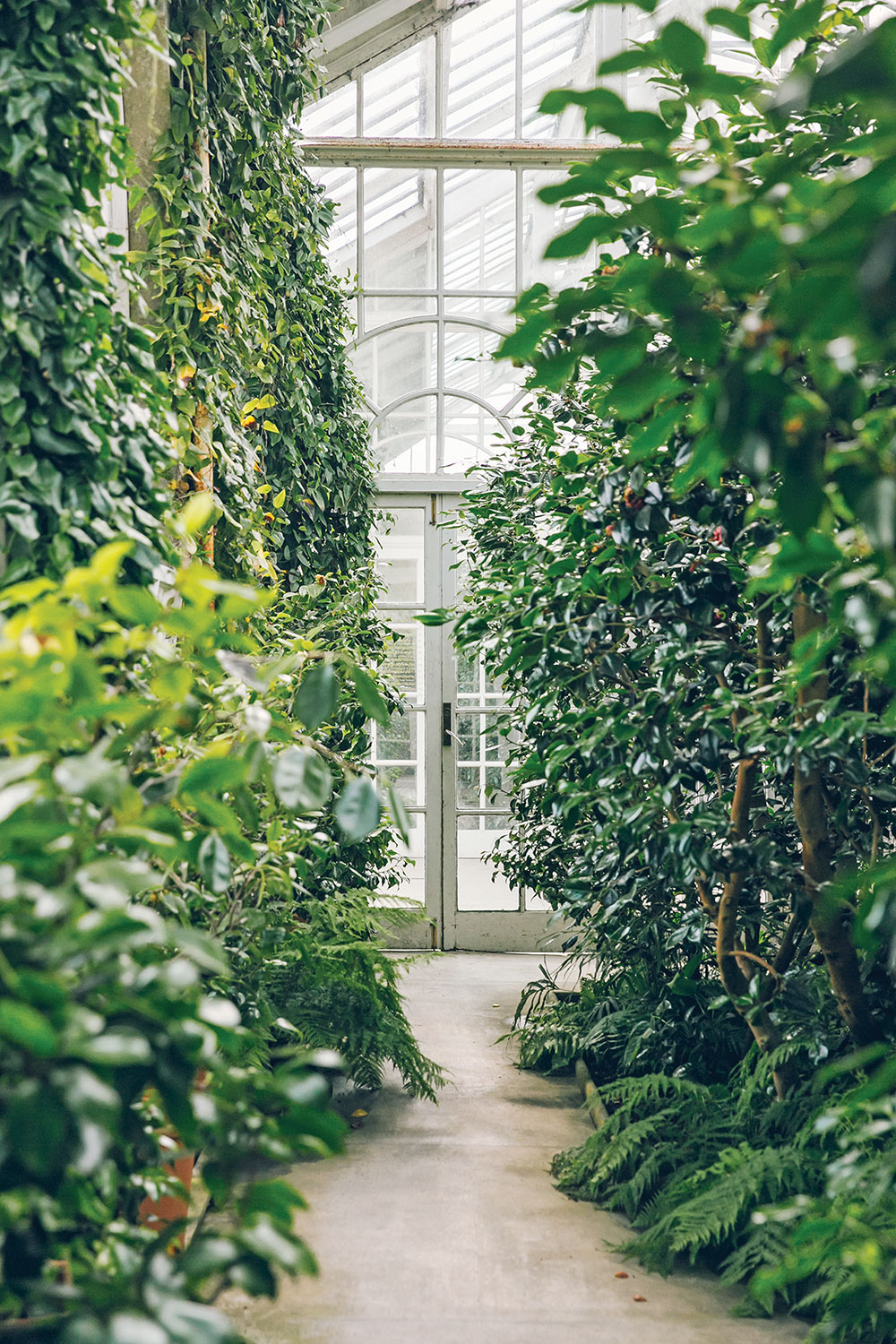 Inside the Greenhouse. Photo courtesy of Chatsworth House 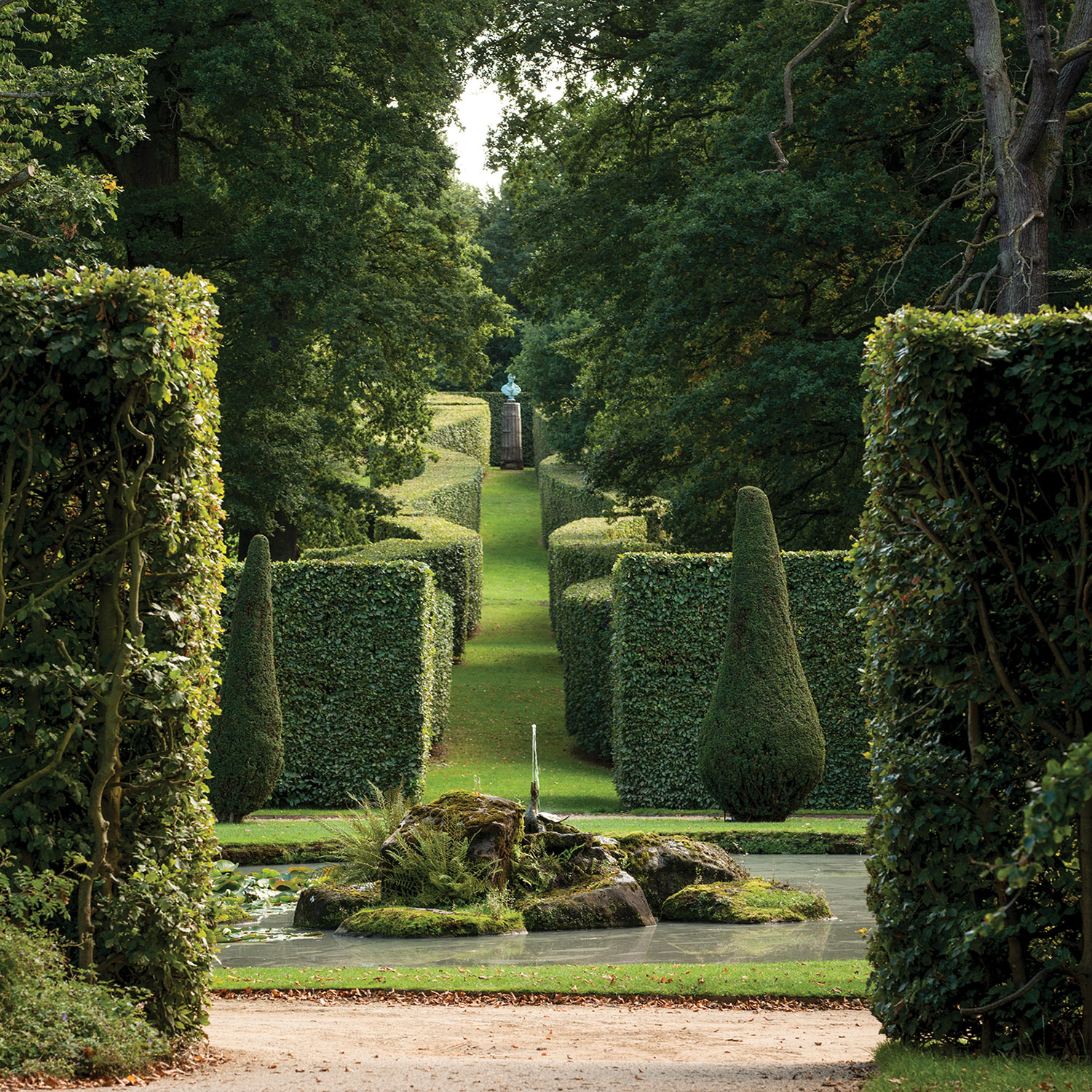 The carefully manicured serpentine hedges were created in 1953. Photo courtesy of Chatsworth House 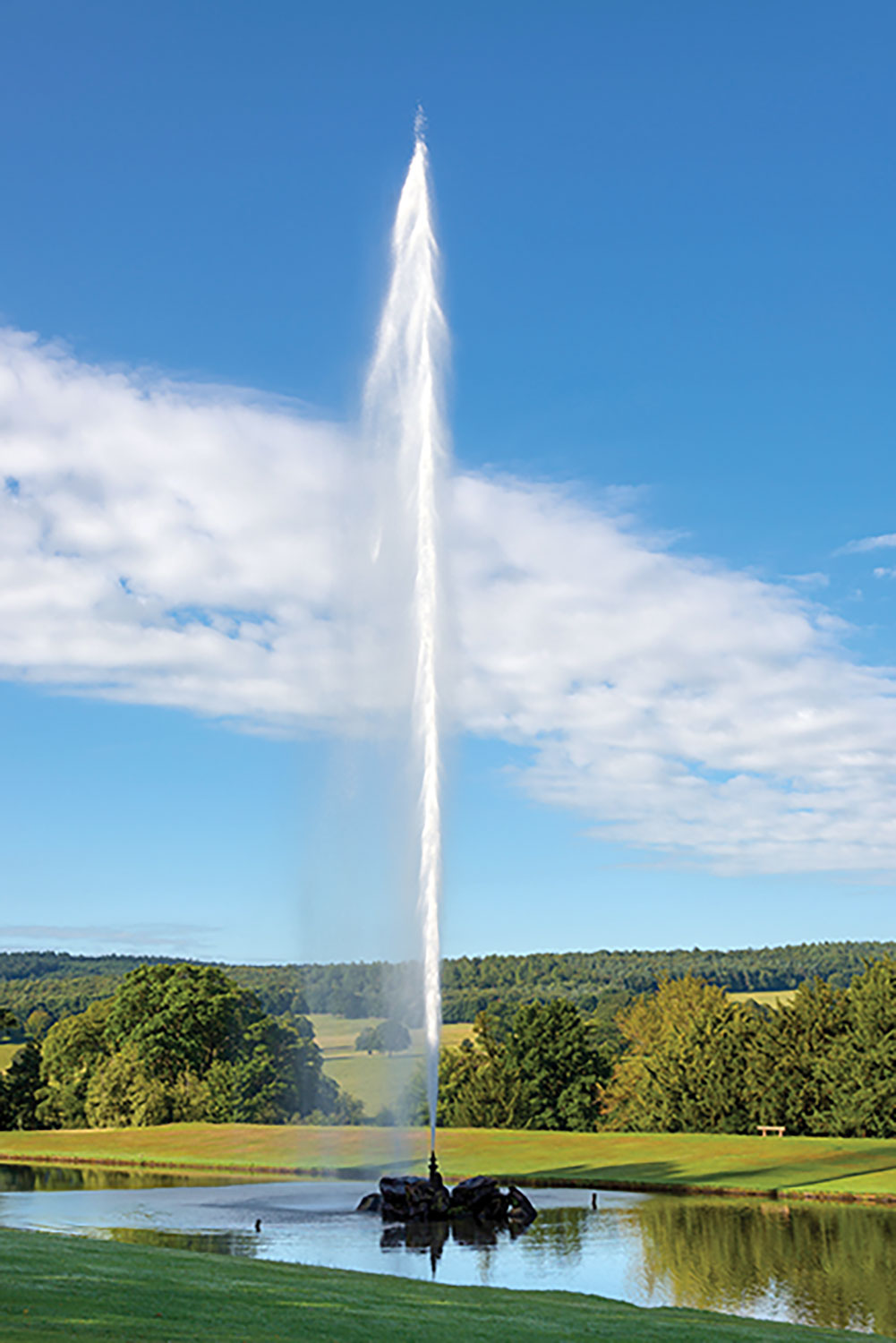 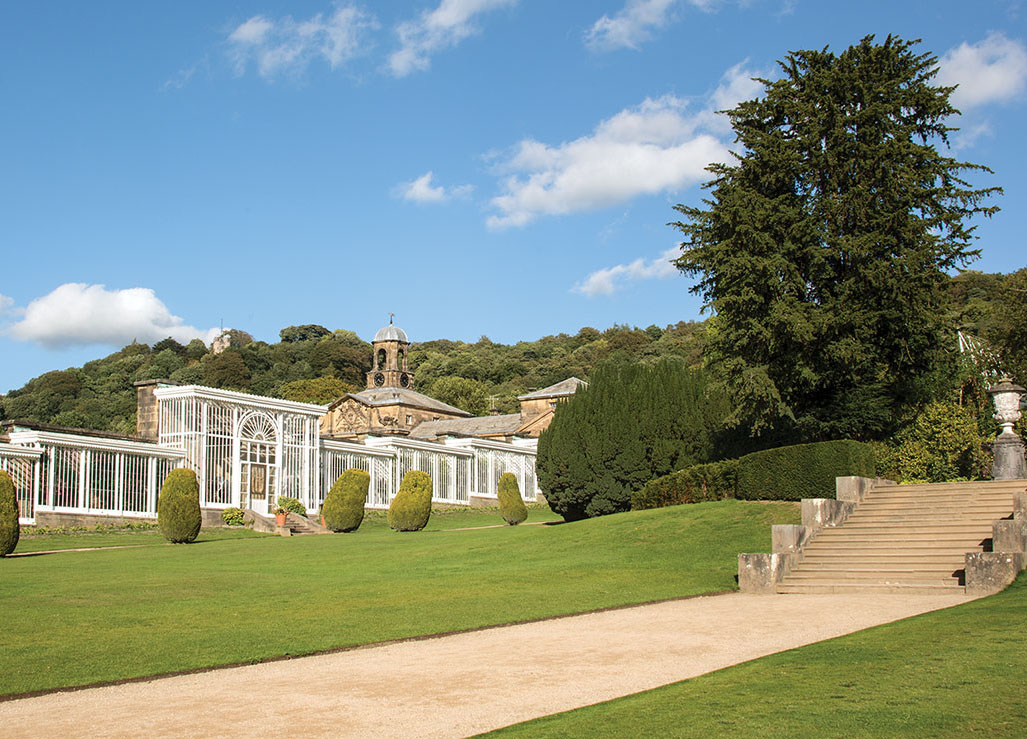 The Case, designed by Paxton in 1838 to protect tender plants such as figs and peaches, is a dominant feature of the estate. It evolves as a glorious set of interconnected glass and filigree buildings of varying heights. Photo courtesy of Chatsworth House

WHERE TO STAY IN DERBYSHIRE

Lucky travelers to this beautiful corner of Derbyshire in the Peak District National Park have several well-appointed hotels and cottages to choose from, all within easy proximity of both estates.

A rambling stone building in the stylish village of Baslow, The Cavendish Hotel looks out on the countryside toward Chatsworth’s Hunting Tower. A pleasant stroll through the park’s open fields takes you to the main house, perched at the edge of the Chatsworth estate. Filled with original antiques intermingled with contemporary pieces and artworks plucked from the family’s collections, the rooms feature huge fireplaces. The tweed-jacketed staff can arrange cycling in the Peak District.

Located on the Chatsworth estate, the cottages offer a variety of private options, such as the 16th-century Hunting Tower, which sits over an escarpment 400 feet above Chatsworth House at the edge of Stand Wood. This fascinating vertical pile, completed in 1582 for Bess of Hardwick, may have been a banqueting or summer house but was also used by ladies to observe the working hounds in the park below. The tall, eerie-looking building with a spiral staircase sleeps four. The one-story Russian Cottage feels equally fairytale. Snuggled on a secluded road beyond Bluebell Woods, the charming building was inspired by a model of a Russian Farmhouse sent to the 6th Duke after the tsar canceled a visit to the estate.

Near Haddon Hall, at The Peacock at Rowsley, Lord and Lady Edward Manners offer 15 beautifully appointed rooms and an award-winning restaurant. The 17th-century building has been a hotel since the 1830s—it’s pet-friendly, and sporting options, including fly-fishing on the River Derwent and Derbyshire Wye, can be arranged. Arne Maynard designed the picturesque riverfront garden.

4. The Devonshire Arms at Beeley

Charles Dickens once favored this 18th-century coaching inn. Still popular with those who love its cozy bar and modern Brasserie decorated by the duchess herself, it is known for its locally sourced fare, including English cheeses, Derbyshire lamb, and Wye Valley asparagus. Fourteen comfortable bed­rooms make it a perfect pausing destination.

Find this boutique country-house hotel on the edge of the Chatsworth estate. Perched on the picturesque village of Baslow, the elegant manor offers 11 bedrooms and an award-winning restaurant specializing in local products such as Derbyshire pork, lamb, venison, and native fish with vegetables from the kitchen garden. Even if you are staying elsewhere, be sure to have a meal here during your visit.

SO MANY ENGLISH GARDENS TO EXPLORE