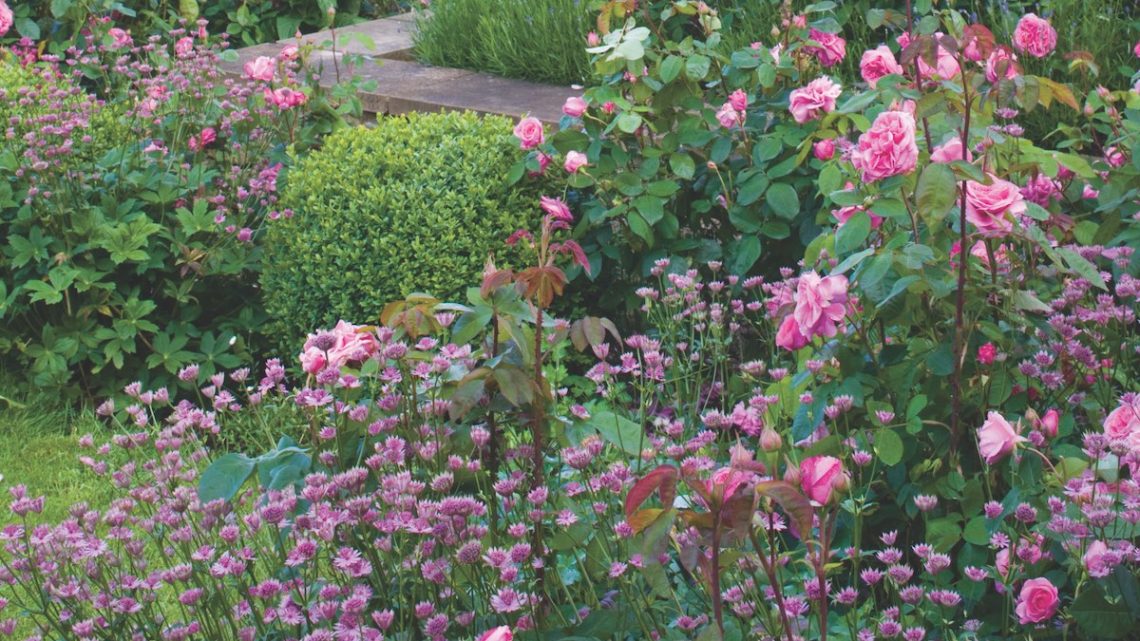 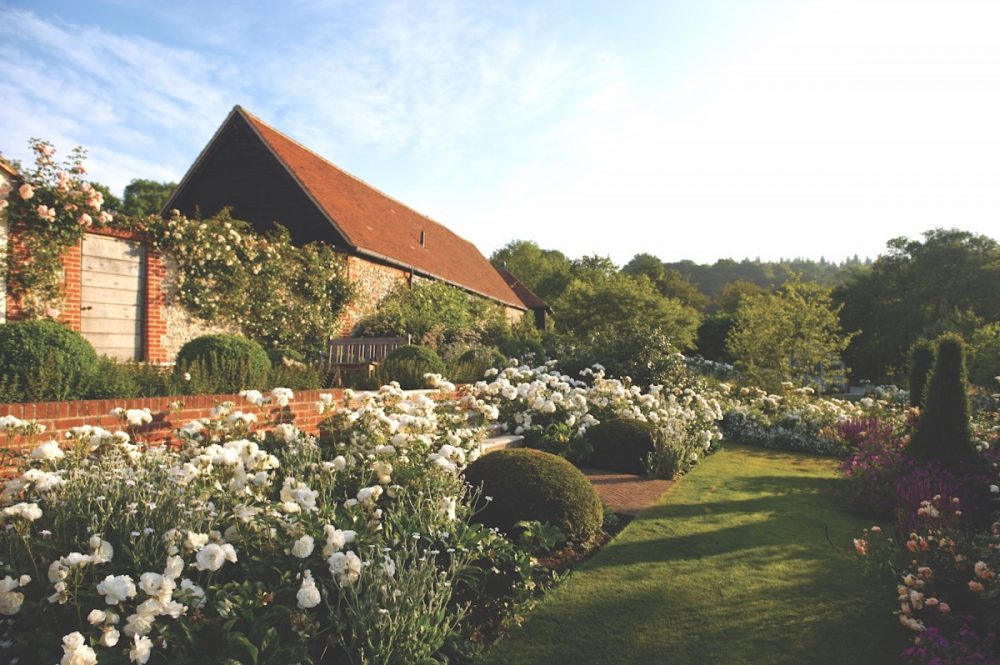 Brilliantly eclectic garden designer Jinny Blom’s accomplishments include more than 250 gardens all over the British Isles, Europe, and the United States. “I am comfortable with formal, naturalistic, romantic, or contemporary gardens, and the fact that I am very plant oriented and garden themed means I can go rustic or formal in many different palettes,” she says. Photo by Nathalie Jouan, courtesy of Jinny Blom Limited

If Jinny Blom’s name seems totally appropriate for one of England’s most renowned garden designers, it’s because it is, and she relishes elaborating on the theme. Raised in Gloucestershire in a Danish-French family, Blom delights in explaining that her family crest consists of three ‘Flame’ tulips in a knight’s helmet, and that her surname means “flower” in Danish.

Shrugging at the inevitability of her vocation, she says there was absolutely no choice other than to do flowers, “one way or another.” That was evident from the time she was a little girl and her father named her “Mrs. Mud,” she says, “because I was always pottering around in the garden and water meadows near the house.” But first, she enrolled in a theatre college in Stratford-upon-Avon. “I really couldn’t act because I am too shy, so I decided to do set design instead,” Blom says. That segued into psychology and the realization that gardening had an uplifting effect on her patients. In 1996, she joined Dan Pearson’s landscape design studio as an apprentice.

“When I was 36, I thought, I really have to do something creative. I’m an independent girl; I am making gardens for people as a hobby. So basically I gave up the psychology on a Friday night and started this business on a Monday,” the designer says. 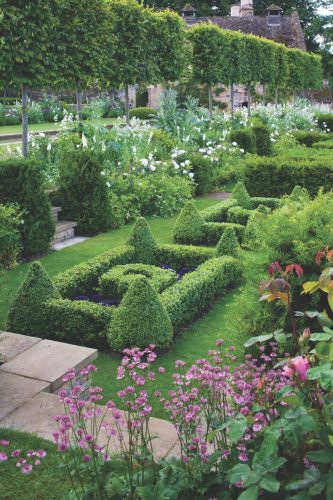 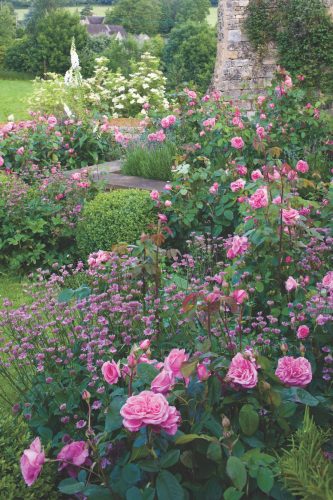 Commissioned to restore the gardens at Temple Guiting, a 15th-century Cotswold manor (above), Blom created garden rooms bound by new dry-stone walls, like this boxwood and yew parterre garden guarded by pleached hornbeam trees. The gumdrop- shaped corners of the parterres, along with the looser borders of white foxgloves and roses, demonstrate Blom’s deft combining of restraint and whimsy.

Thirteen years later, Blom’s accomplishments include more than 250 gardens all over the British Isles, Europe, and the United States. “I don’t have a particular style. I am comfortable with formal, naturalistic, romantic, or contemporary gardens, and the fact that I am very plant oriented and garden themed means I can go rustic or formal in many different palettes,” she says. “The advantage of British gardens is our temperate climate that allows us to grow absolutely everything.” 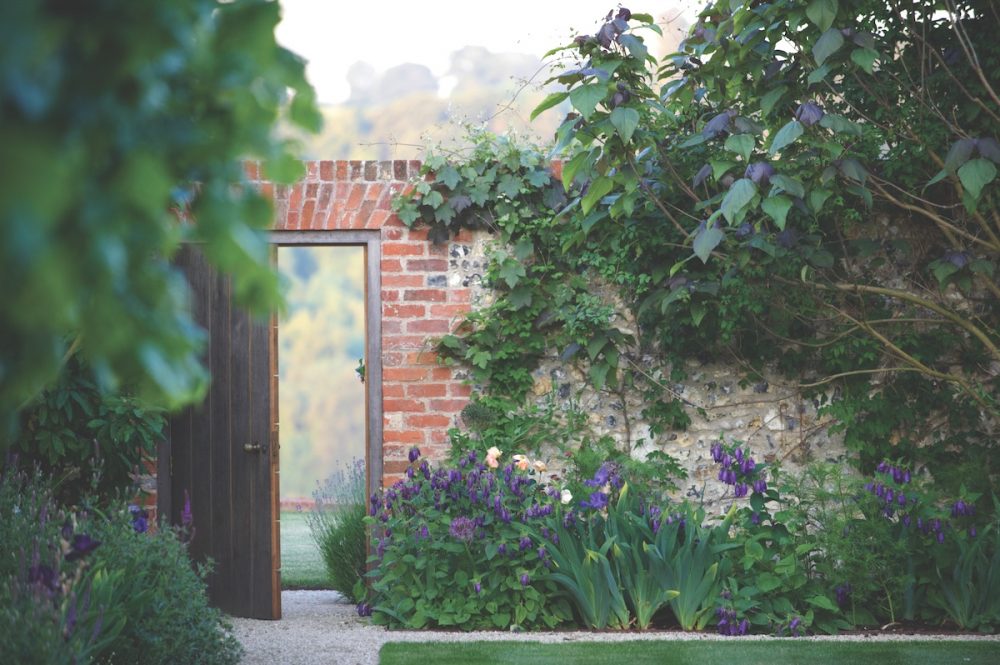 Projects such as the 18 garden rooms at the 14-acre estate of Temple Guiting, a 15th-century manor in Gloucestershire, won a Pinnacle Award in 2006

Emphasizing her pragmatic approach, Blom is clear about her distinctive method of attacking a project. “I don’t have lots of staff, and I don’t have palatial offices or a P.A. I am very, very involved with every garden project,” she says. “My clients don’t want one meeting with me and then another meeting with somebody else.” Within the mix are extremely high-profile clients she deftly sidesteps identifying. However, she is proud of her collaboration with His Royal Highness Prince Charles on their “Healing Garden,” which won a silver-gilt medal at the 2002 Chelsea Flower Show. 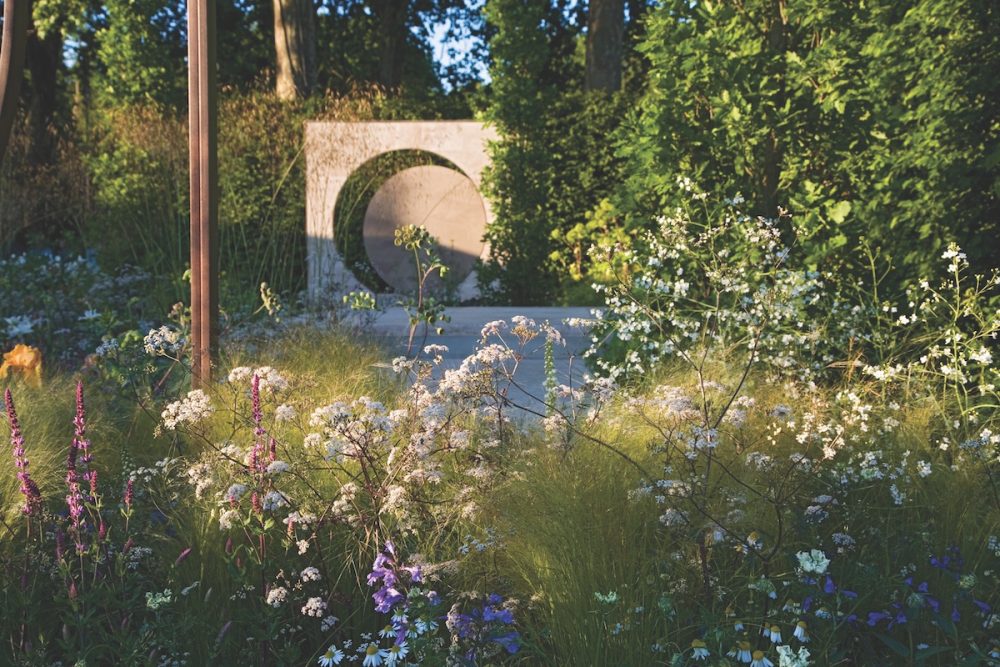 Blom won the gold medal at the 2007 Chelsea Flower Show for this Laurent- Perrier garden called, “A Moment of Reflection.” The title references the journey of life, illustrated by the circular moon gate and a mix of varying heights of hardscape with soft, dreamy plantings. Photo by Andrew Lawson

Blom’s mantra for this project at Chelsea was to avoid straight lines and angularity in multilevel planting that included useful medicinal and culinary plants. The endearing garden evolved as a naturalistic odyssey of gentle curves and undulations in which 125 species were planted in tandem with furry mosses and moving water, enclosed by a traditional Hawthorn hedge. The final selection included key healing plants such as old ‘Apothecary’s Rose’ roses, wild pansies, lady’s mantle, foxgloves, and yew. Herbs such as fennel, dill, bugle, and clary sage, among others, added to the charming mix.

Subsequent projects such as the 18 garden rooms at the 14- acre estate of Temple Guiting, a 15th-century manor in Gloucestershire, won a Pinnacle Award in 2006; and the following year Blom was awarded a coveted gold medal at the Chelsea Flower Show for her Laurent-Perrier garden. 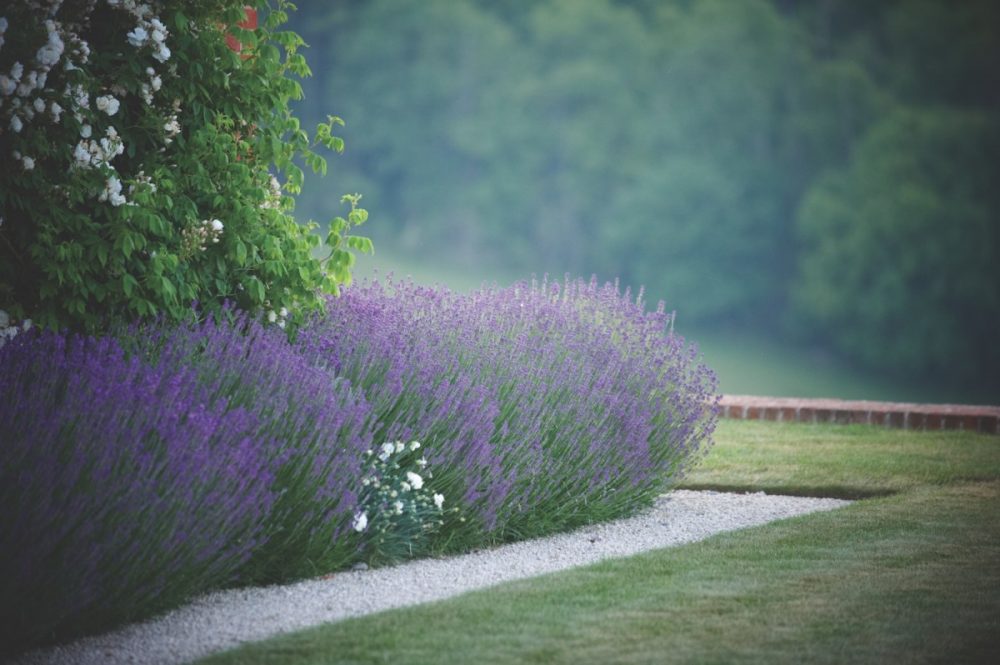 Moundy drifts of lavender along a gravel path at Chalkland Farm. Photo by Charlie Hopkinson, courtesy of Jinny Blom Limited

Balancing romance with practicality, Blom studiously evaluates each setting. After boning up on its history, she distills her dreams for that particular garden and then aims for a high- octane response from the earth in which she adores digging. One of her favorite prototypes is a garden with narrow borders that blooms for three seasons. “Borders that are less than four feet deep are easy to get at,” she says.

“Equally important is the fact that a meticulously planned garden goes all summer. We start with dafodils and hellebores in March. I love irises, and adore peonies. They are gone in a week but they linger in your memory,” says Blom. “Viola cornuta ‘Alba Minor’ and Viola cornuta ‘Boughton Blue’ will go on and on all summer; and even if you hack them back, they will return. There’s ‘Winchester Cathedral’ roses and ‘Duchesse de Nemours’ peonies, which are both wonderful, and I like to use ‘Comte de Chambord,’ a strong pink rose to anchor the corners. Don’t forget fragrance, which you definitely want in a garden. Then in winter, it’s all about the structure of the trees.”

Inevitably Blom’s clients become so enamored with her freshness, ingenuity, and buzzy, can-do attitude that they often request solutions to unrelated design issues. One asked her to design a five-star hotel in Yorkshire that included flower arrangements and staff uniforms. Another client enlisted help in creating a new kitchen and designing the furniture to go in it. “Oh well,” says Blom. “You start doing one thing and go right into something else that needs doing. It’s all part of a grand, creative process.” 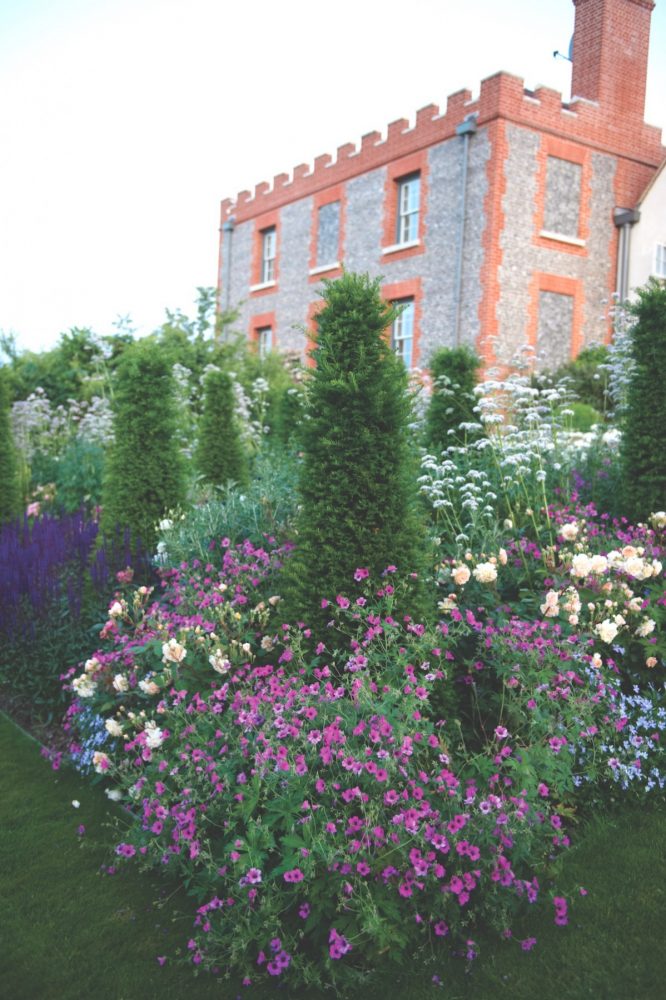 The rose garden with other guest blooms and yew columns tucks the house in at Chalkland Farm. Photo by Charlie Hopkinson, courtesy of Jinny Blom Limited

As her international presence soars, Blom brilliantly balances several projects at the same time. Presently though, she is working closely with HRH Prince Harry on a special garden for the 2013 Chelsea Flower Show, the Sentebale “Forget-me-not Garden.” Hoping to boost the charity supporting Lesotho’s neediest children, she explains that it was set up in 2006 in memory of HRH Prince Harry’s and Prince Seeiso’s (of Lesotho) mothers. “Lesotho has a fascinating landscape and culture that confounds one’s expectations of what makes a country African,” she says. “The garden is a contemporary evocation of the mountains, round houses, and wonderfully unusual blankets people wear, because the climate is cool and damp, akin to that of Wales. I am hoping to express not only the beauty and rich culture, but the inaccessibility and fragility of the country.”

If this project sounds light-years away from anything she has done before, Blom would say it really isn’t, because every garden she designs shares common denominators of integrity, understanding, beauty, and longevity. But since a quirky smile often adorns her face, it’s sometimes hard to know whether she’s teasing or being serious. Except that is, when she describes the grand scheme of her team’s gardening goals: “Our styles vary consider- ably, yet the principles remain firm. We build to last,” she says. Then Jinny Blom adds softly, “We love what we do.”