Whether it is an Asian-influenced pavilion, a faux crumbling medieval ruin, or a domed neoclassical temple (picture the one in the rain where a drenched Lizzie Bennet meets up with Mr. Darcy during the climactic scene in the 2005 remake of Pride & Prejudice), garden follies have dotted the British landscape for some 300 years. Despite the not-so-serious-sounding name, these architectural creations are more than just pretty faces. “They had meaning over and above just being delightful,” says Emile de Bruijn from the UK’s National Trust. Think of follies as a sort of three-dimensional 18th-century Instagram—a way for landowners to share their interests in other cultures or in literature, or to make a political statement, suggests de Bruijn: “The structures needed to be attractive and amusing, but there was always a message somewhere.”

In theory, a folly is a nonessential building that often serves as a garden focal point or eye-catcher, drawing attention to a desired view and encouraging visitors to explore. While not typically designed to be inhabited, at least not full time, the structures were nonetheless used as getaways—places for parties, private rendezvous, reading, and reflection—and might be equipped to chill wine and perishable fare.

Of course, the concept of a pleasure pavilion in the garden can be traced back to ancient Greece, but it was the British landscape movement of the 18th century, with its penchant for sweeping vistas and meandering paths, that gave rise to a proliferation of fantastical buildings that make “the pulse quicken as a distant tower comes into view at the end of an avenue,” as the late architectural historian Gervase Jackson-Stops wrote.

In the 1740s, at his Wiltshire country villa, Stourhead, Henry Hoare II began mimicking a dreamy scene from a Claude Lorrain landscape painting by surrounding a man-made lake with heaps of strategically placed follies such as the Temple of Flora, an ode to the Roman goddess of flowers and spring. But Britain’s most recognizable 18th-century folly might arguably be the Great Pagoda at Kew Gardens in London—a soaring Chinese-inspired tower designed by architect Sir William Chambers for Princess Augusta in 1762.

Like so many grand English gardens, Kew once had numerous follies including the minareted Turkish folly and the Moorish Alhambra. Lee Prosser, buildings curator for Historic Royal Palaces, oversees the current restoration of Kew’s Great Pagoda and is often asked how the 163-foot-tall folly was used: “I have to answer that it was an eye-catcher and a viewing platform only, but there are deeper layers to be explored,” he says. Princess Augusta and her son, the future George III, probably intended their follies to be educational, windows to the broader world.

“It was such a bold statement, exemplifying the cosmopolitan eclecticism of the English landscape garden at that point in time, when a Chinese pagoda could happily coexist with a Roman temple,” adds de Bruijn, pointing out that Kew’s Great Pagoda was intended to be an accurate tribute to the porcelain pagoda at Nanjing (although, unfortunately, architect Chambers mistakenly designed his tower with an even 10 stories rather than the odd number deemed luckier by the Chinese).

Originally 80 wooden dragons roosted on the Great Pagoda, shimmering like multicolored glass, but the creatures mysteriously vanished after they were removed for maintenance more than two centuries ago. Recently a team of specialists began toiling away with verdigris paint, Prussian-blue pigments, and a touch of gilt to reproduce the dragons.

Smaller in scale is the Chinese House at Stowe, the oldest surviving chinoiserie garden pavilion in Britain, first recorded in 1738 and attributed to designer William Kent. Modern eyes may see a charming, colorfully painted, latticed-windowed building, but for its owner, Viscount Cobham, the pavilion seems to have been a visual jab at British Prime Minister, Sir Robert Walpole, according to de Bruijn. Viscount Cobham thought China’s rulers were far more stable and virtuous.

Thomas Jefferson, John Adams, artists, aristocrats, middle-class tourists, and possibly even Jane Austen were all welcomed at Stowe to see many other follies, too, including Kent’s Temple of British Worthies, which celebrates philosopher John Locke and assorted luminaries. “I think that because of modernism, we have gotten used to things having no meaning beyond their materiality, or endlessly multiple meanings, but in previous centuries there was still a sense that there was a visual language that everyone accepted—even if not everyone understood all of the messages all of the time,” says de Bruijn.

The Victorian era brought a particularly surreal, tongue-in-cheek approach to garden follies with the Egyptian Court at horticulturist James Bateman’s Biddulph Grange, where visitors still pass through a sphinx-guarded tomb composed of clipped yew and stone, but find themselves exiting on the porch of a mock Cheshire cottage.

Similarly, it’s a dreamlike sense of wonder and surprise that typifies the work of contemporary designers Isabel and Julian Bannerman. At first glance, two columned temples situated amongst rugged, moss-covered tree stumps and masses of lush hostas and ferns in the Prince of Wales’ organically maintained Highgrove Royal Gardens appear to have been around for centuries, but a closer look reveals the more recent touch of the Bannermans. Built in 1996, the temples are made of woody, sustainable materials such as wire-brushed, hand-sanded green oak favored over the traditional, more imposing stone, while the triangular pediments are filled with rustic, recycled white roots that washed ashore in Scotland, in lieu of formal relief carvings.

While the temples are representative of follies, Isabel Bannerman is quick to explain, “Julian and I don’t like the word folly because it implies a sense of uselessness, which some people think is the point, but our buildings always have a use. They are vital for the visual design, setting off the plants and often providing verticality instantly, and they make use of discarded, reclaimed, or local materials. Also, in England it is always raining so you need the shelter. The main point of these things is that they take you on a journey.”

At Woolbeding—a 26-acre private garden leased from the National Trust by the late philanthropist Simon Sainsbury and his partner Stewart Grimshaw—the Bannermans added an enchanting hermit’s hut and a faux ruined abbey to the grounds’ existing follies. On select days throughout the year, the public is invited to get lost in the garden, perhaps stumbling into the hermit’s hut with its intricately patterned interior crafted from humble woodland materials. In our relatively jaded era, the Bannermans’ garden follies show construction done in harmony with nature, but they also trick the eye, blur boundaries between fantasy and reality, and encourage childlike curiosity. The 18th-century folly architects would certainly approve. 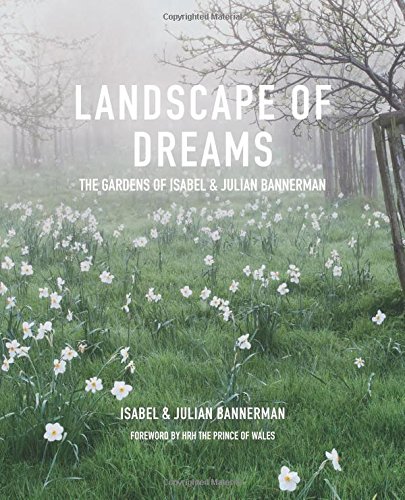