The Gardens of Yorkshire

In the north of England sits Yorkshire, a storied land once populated by marauding tribes as well as highly civilized Roman settlements. Moody moors, green dales, waterfalls, and massive hills of the Pennine range, which change colors depending on the light and season, punctuate the seemingly endless landscapes. At the foot of the Pennine slopes, small soft-yellow sandstone villages look fairy tale–like, while the ghostly ruins of roofless ecclesiastical buildings, such as Fountains and Rievaulx abbeys, wordlessly testify to their suppression under the orders of Henry VIII. Lack of restrictions and abundant land in Yorkshire made possible the enormous houses erected over the centuries. These estates became country seats for titled families whose descendants continue to steward them today. So many public gardens, arboretums, and private houses beckon in Yorkshire that visitors need only decide on an area of concentration. A 3- to 3 ½-hour journey from London by car or train puts you in York, the capital, a captivating walled city from which many of the finest houses and gardens are easily reached. 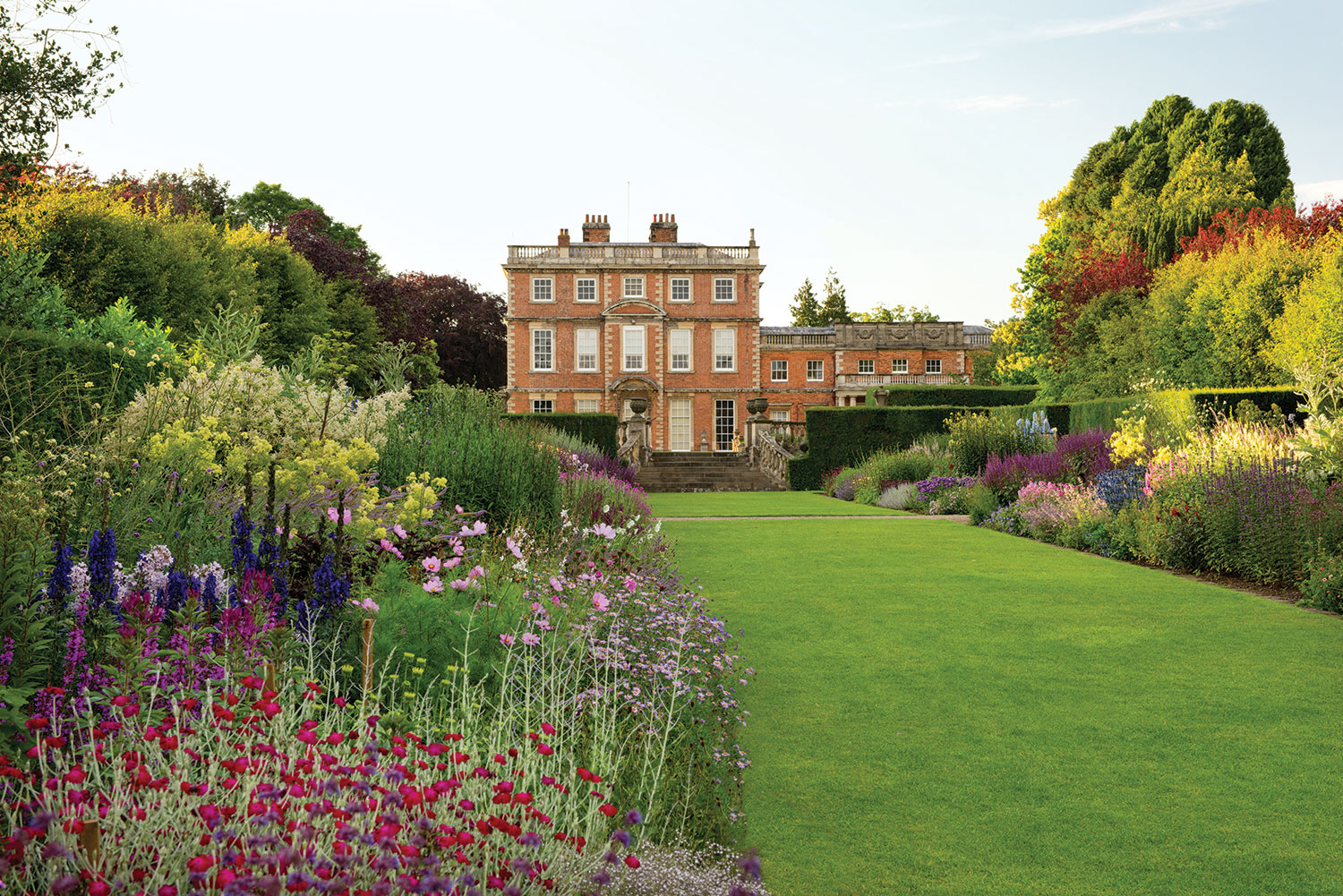 The south front of Newby Hall, a perfectly preserved Adam-style house, overlooks its famed double herbaceous border, one of the longest in the country. Photo by Ellen Rooney 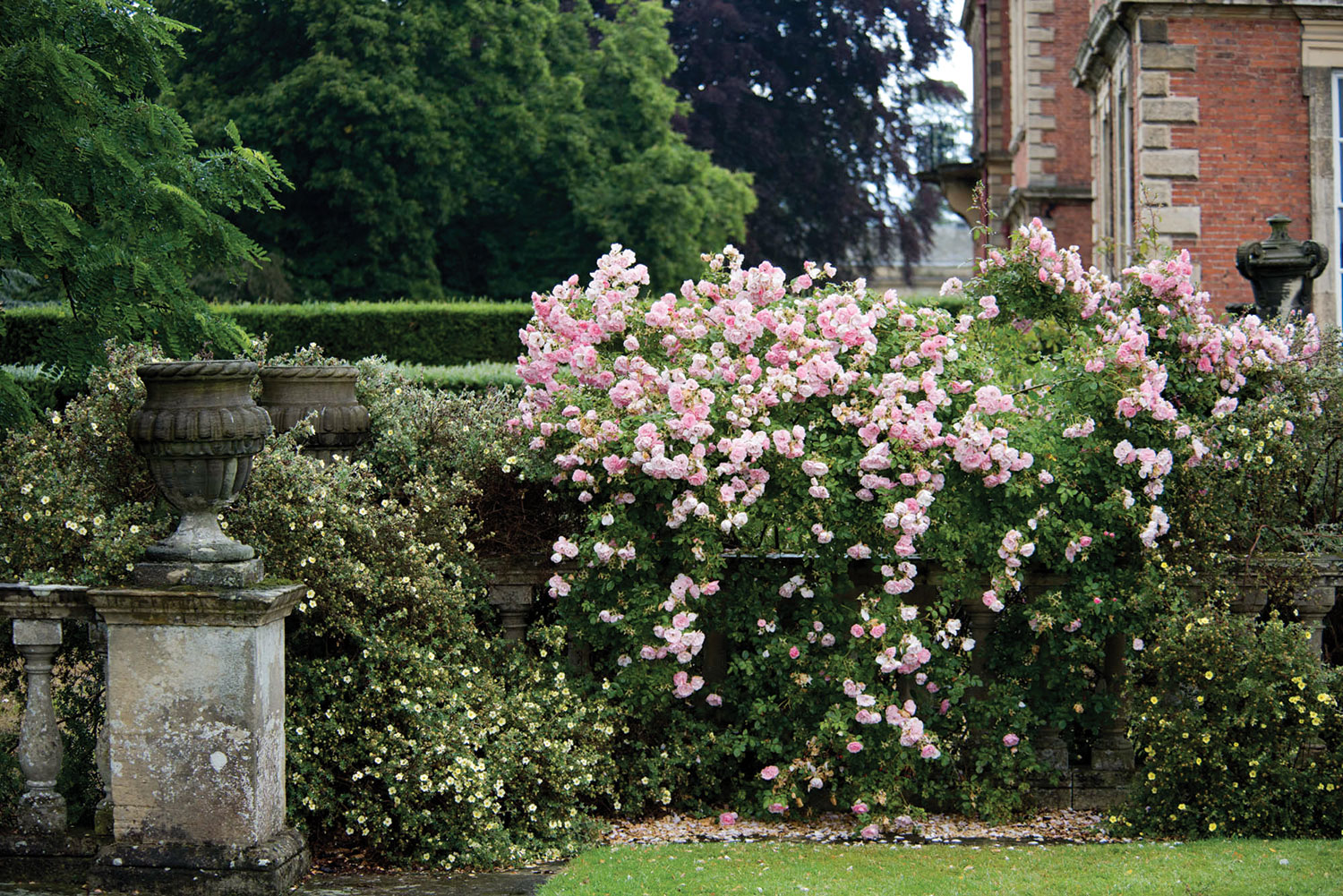 Bounteous vintage roses create a spectacle near the house at Newby Hall. Photo by Ellen Rooney 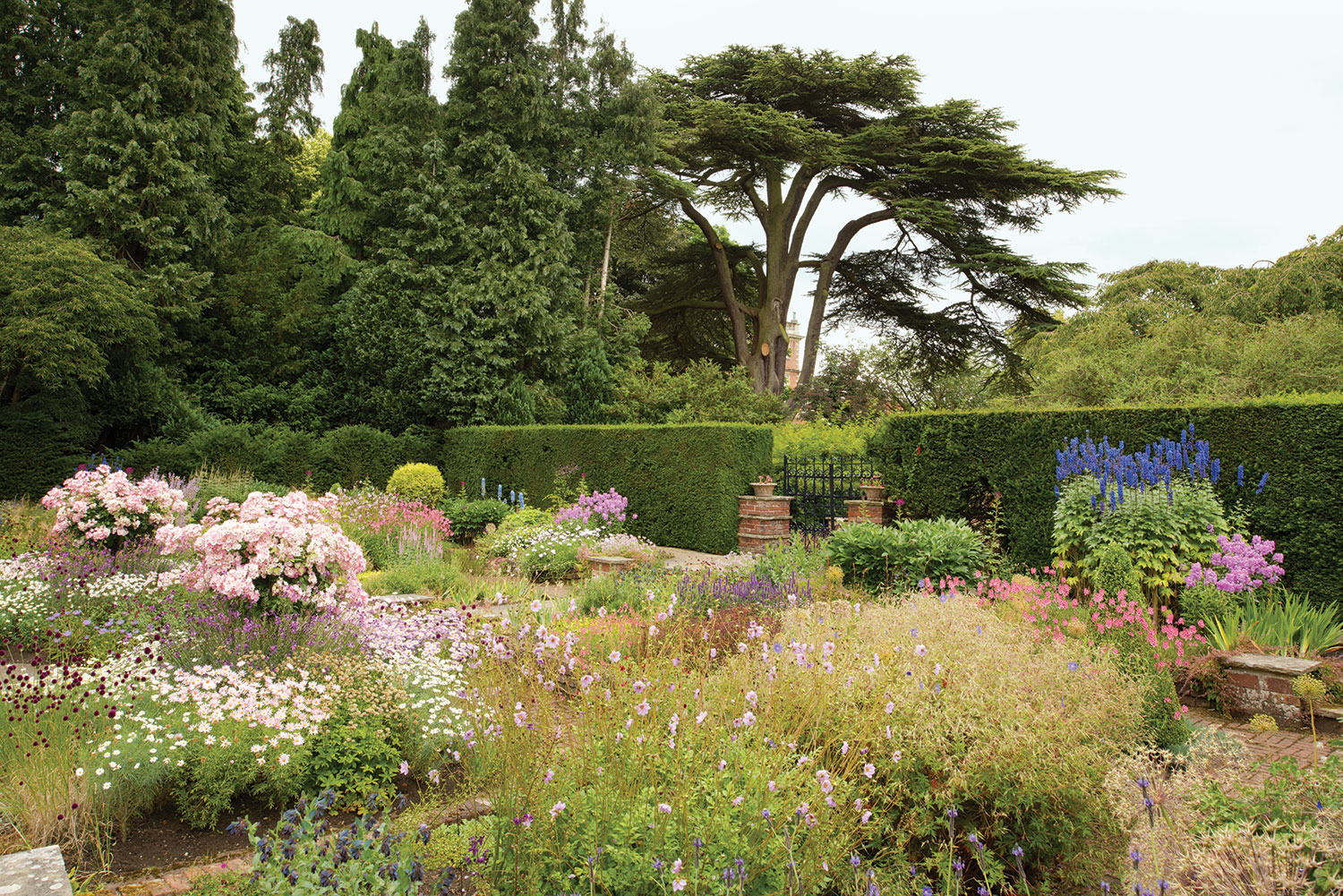 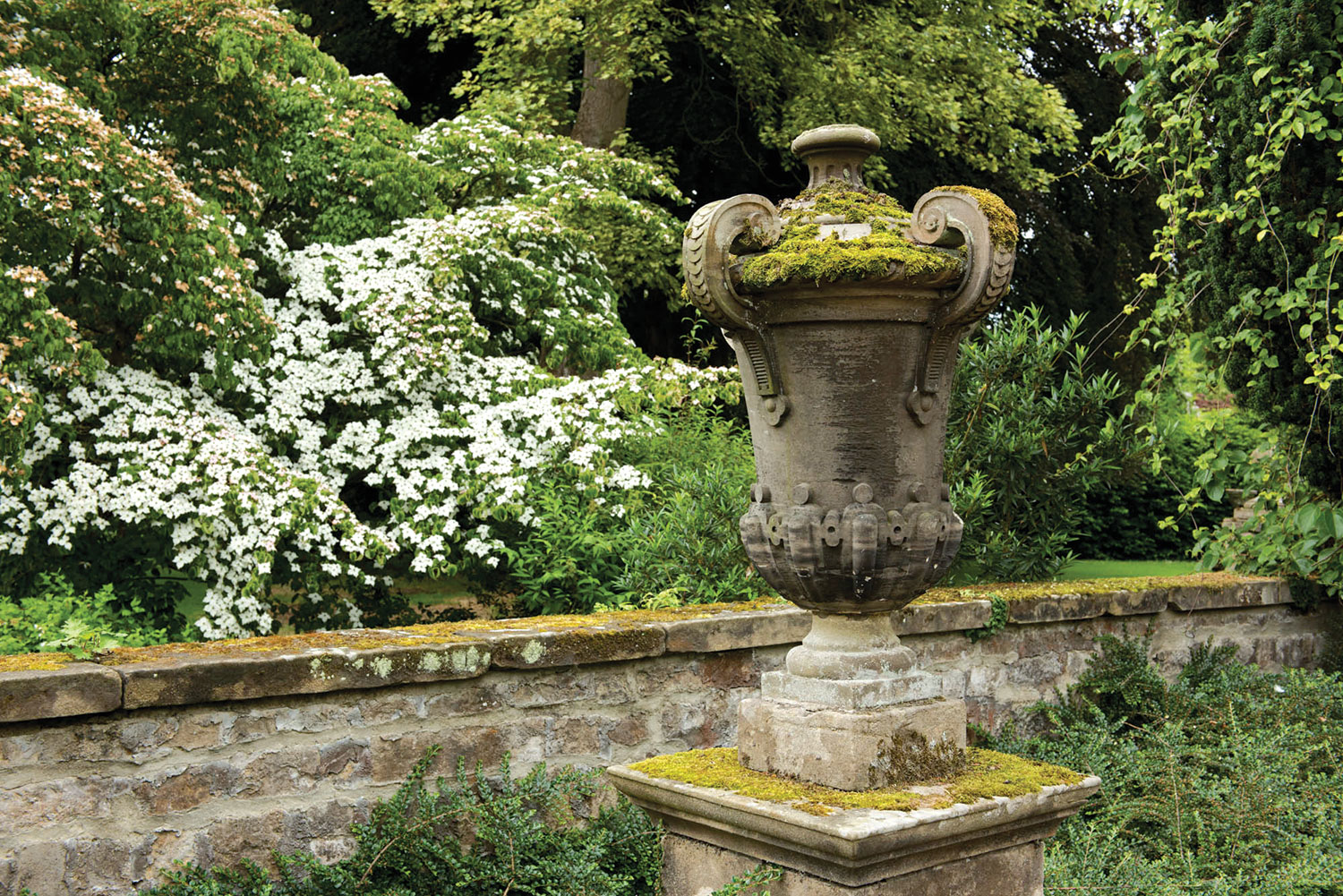 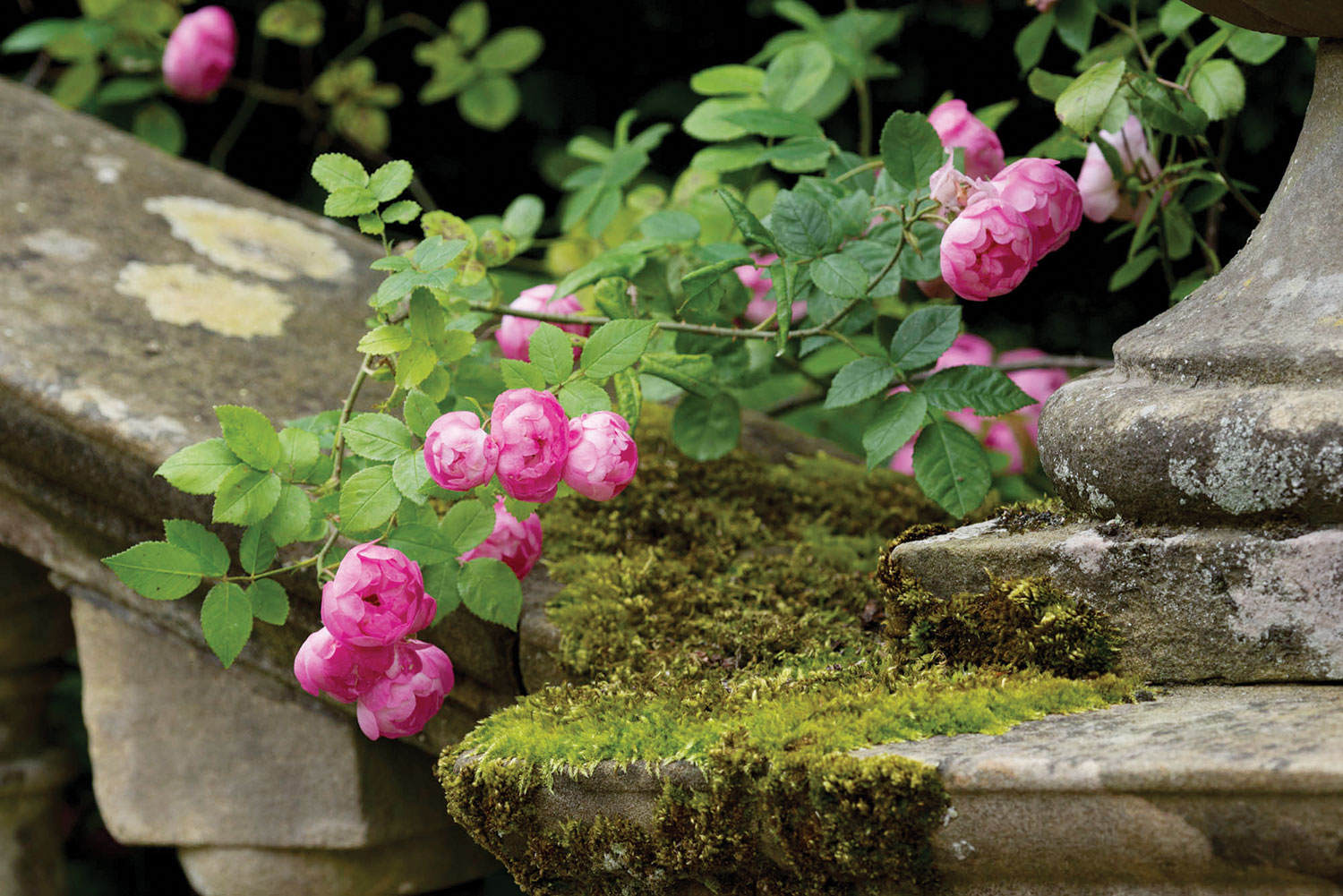 Vintage ‘Albertine’ buds create a sense of anticipation in the Rose Garden at Newby Hall, which also features other old-fashioned and scented varieties. Photo by Ellen Rooney 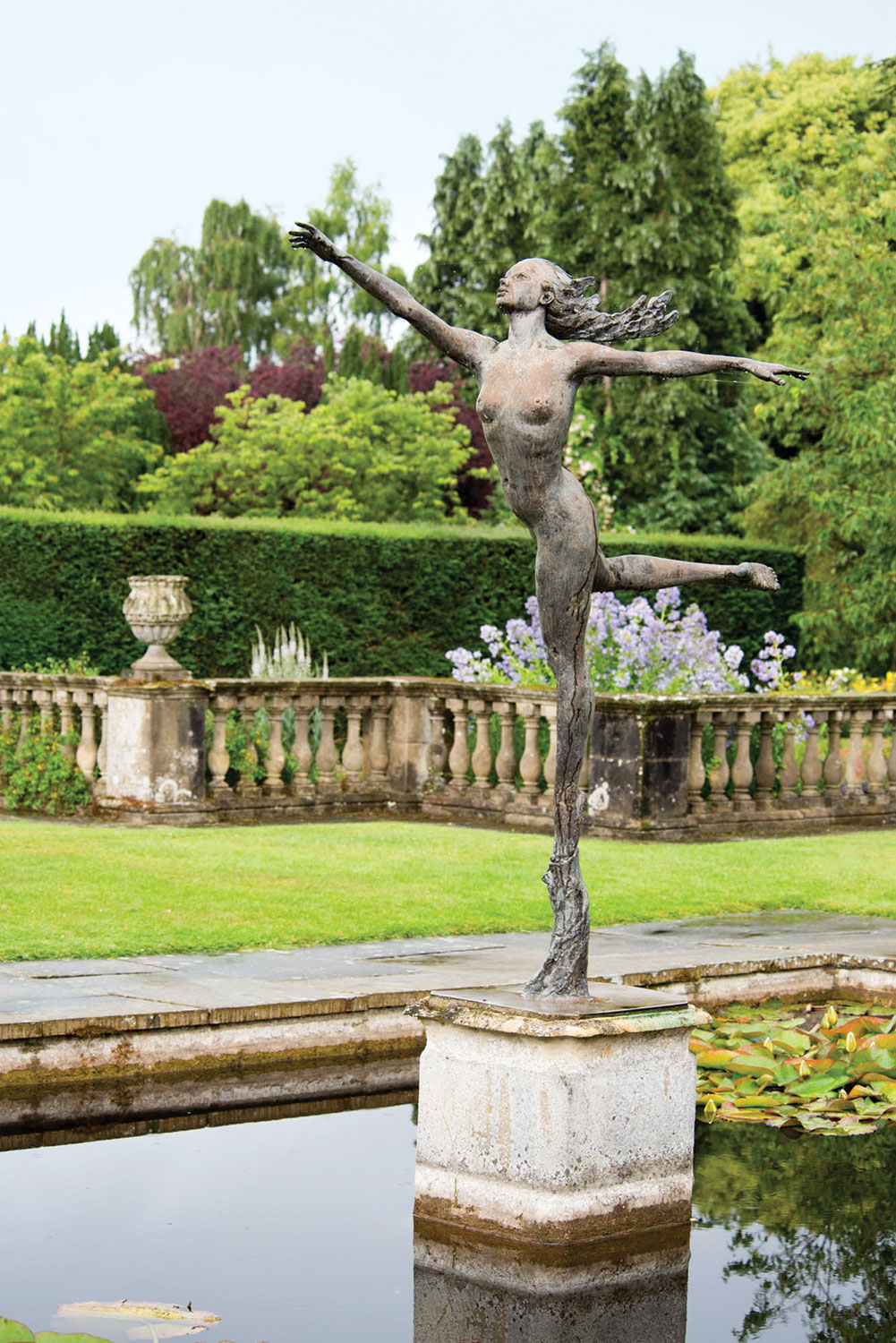 A nymph sculpture holds a perfect arabesque in the reflecting pond near the house at Newby Hall. Photo by Ellen Rooney

As garden historian John Phibbs explains, “Newby Hall is one of England’s finest Adam houses. It was designed in the 1690s by Sir Christopher Wren and later enlarged by John Carr and subsequently Robert Adam, who was commissioned to create an ‘architectural cabinet’ to display Newby’s treasures.”

Strongly considered as the site for the filming of Downton Abbey, it was eventually rejected because it was too far from London. Notwithstanding, Newby Hall now reigns as one of England’s most important estates, and visitors should allow time to tour both the house and the gardens.

From your first step across the threshold, the entrance hall dazzles with its perfectly restored Robert Adam neoclassical design featuring his signature light and ornamental style. The intricate plasterwork done by stucco artist Joseph Rose in the 1770s looks as fresh as when it was first applied to the pale-blue wall panels. Original Chippendale designs make up most of the furnishings.

The renowned gardens encompass over 25 acres of herbaceous borders and garden rooms that have evolved since the 18th century and continue under the aegis of head gardener Mark Jackson. Reflecting the spirited design of Gertrude Jekyll, they evolve as a symphony replete with rhythms of color that are often compared to “painting with flowers,” says Phibbs. “Some gardens are for tranquility and others, to excite. This one is to excite.”

While many love the White Garden, the Water Garden, or Sylvia’s Garden, Newby’s crescendo is
the double herbaceous border that has been totally replanted in two stages over the last couple of years. A triumph of color and texture, it teems with bees, butterflies, and of course, garden lovers looking for inspiration. Augmenting its traditional hues, the lush borders boast a new burst of colors, including bright lilac, magenta, and lime green. 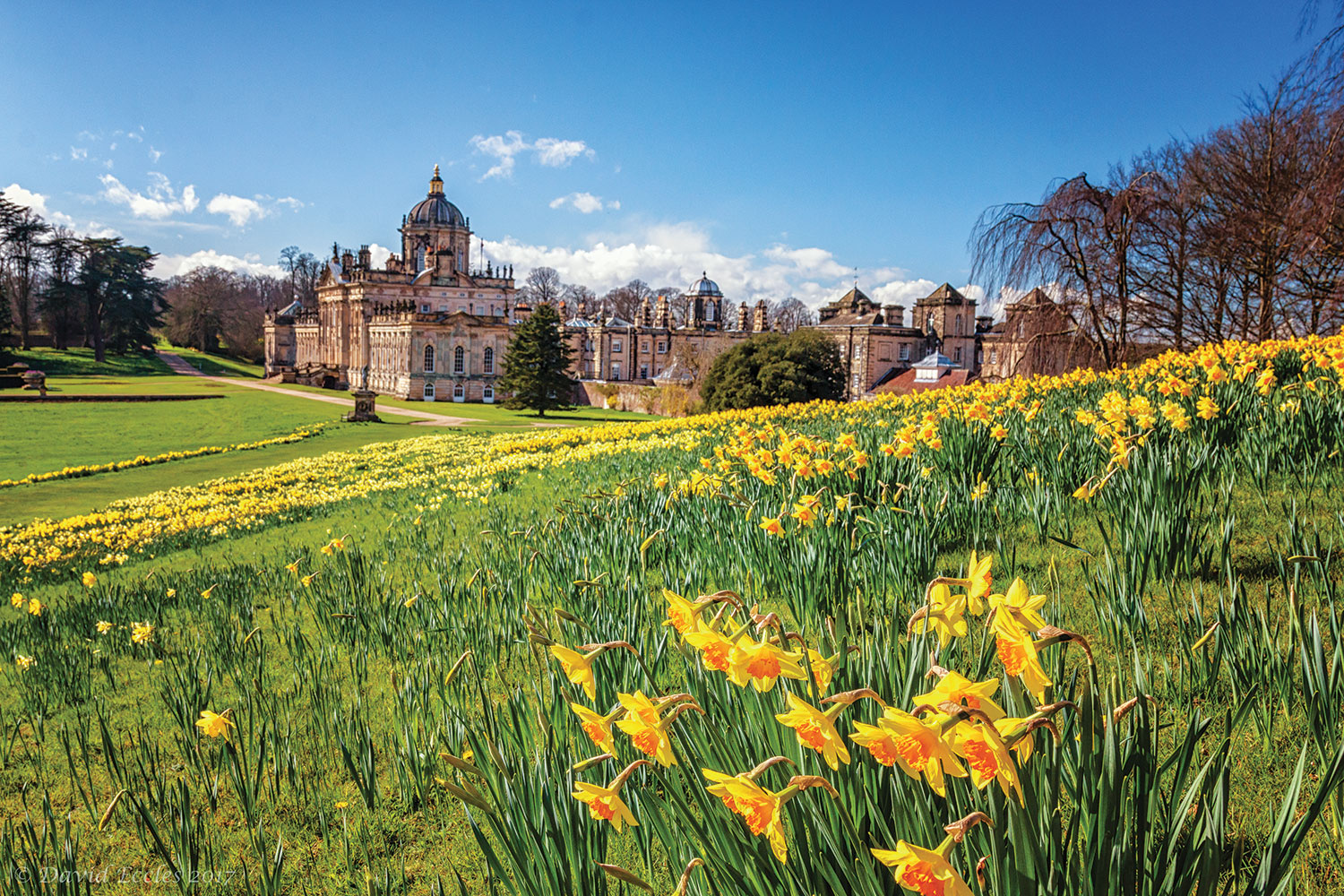 At Castle Howard, narcissus fields on the east side of the house appear in an endless sea of yellow, orange, and white bobbing trumpet blooms that joyously announce spring’s arrival. 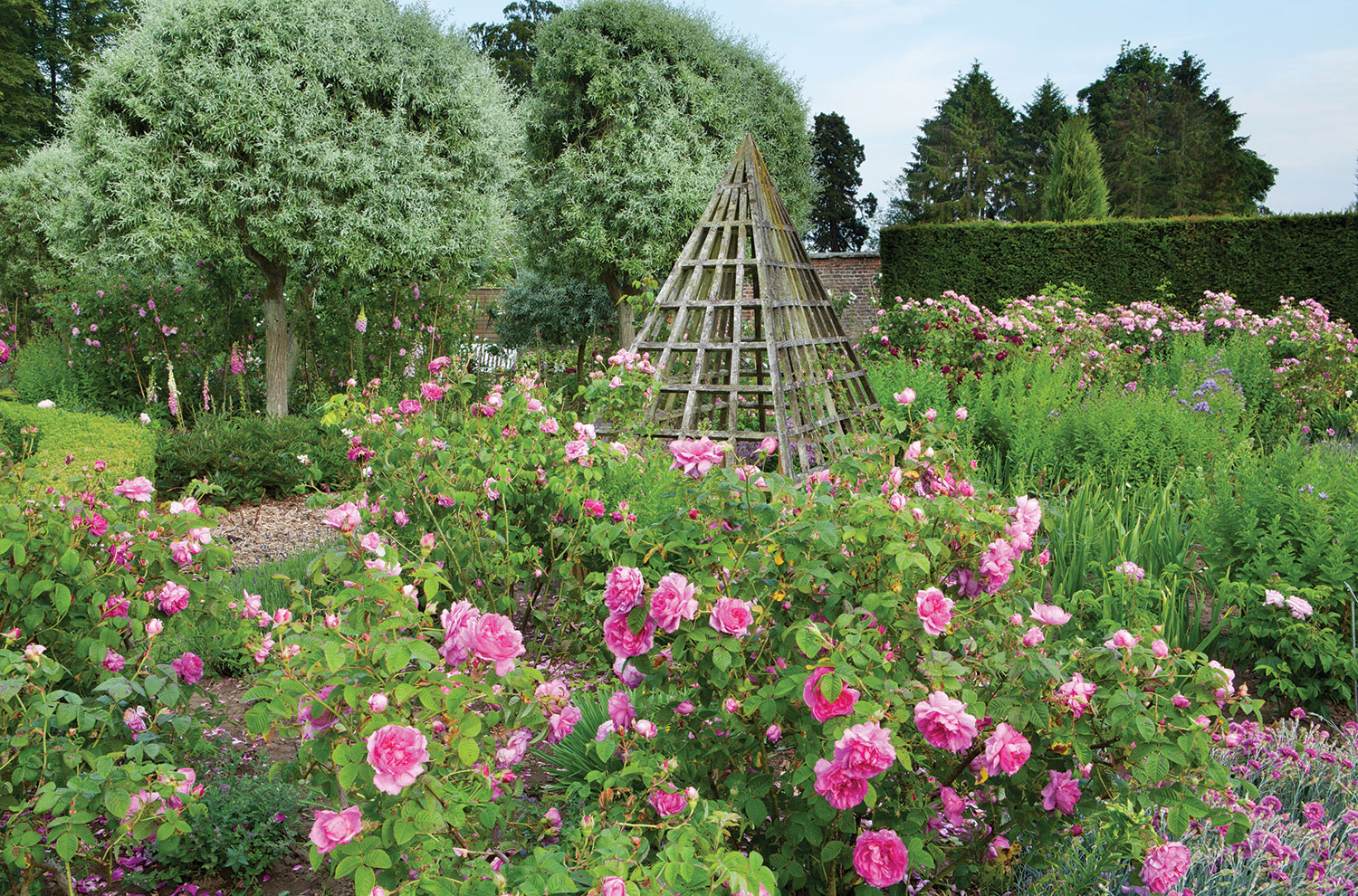 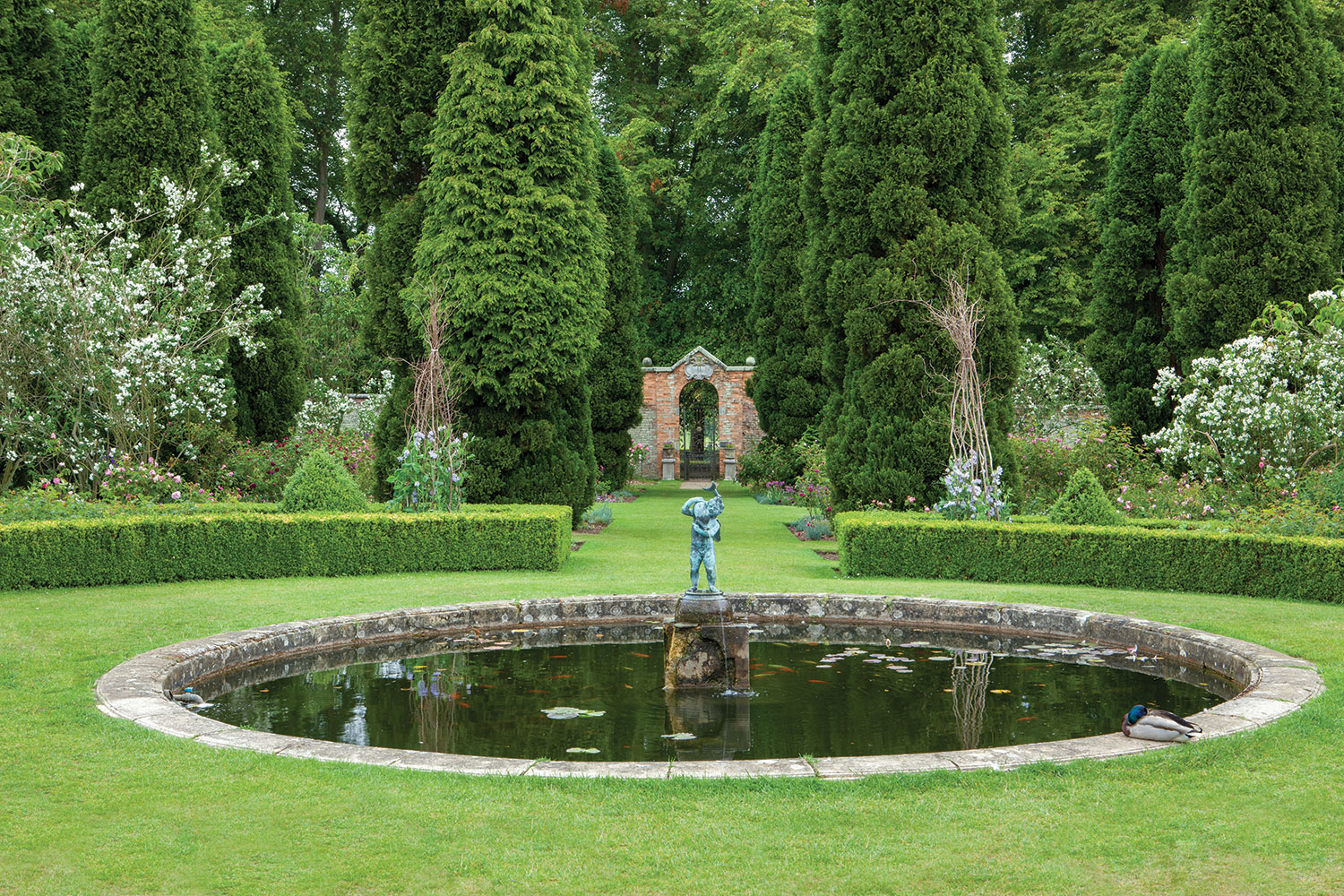 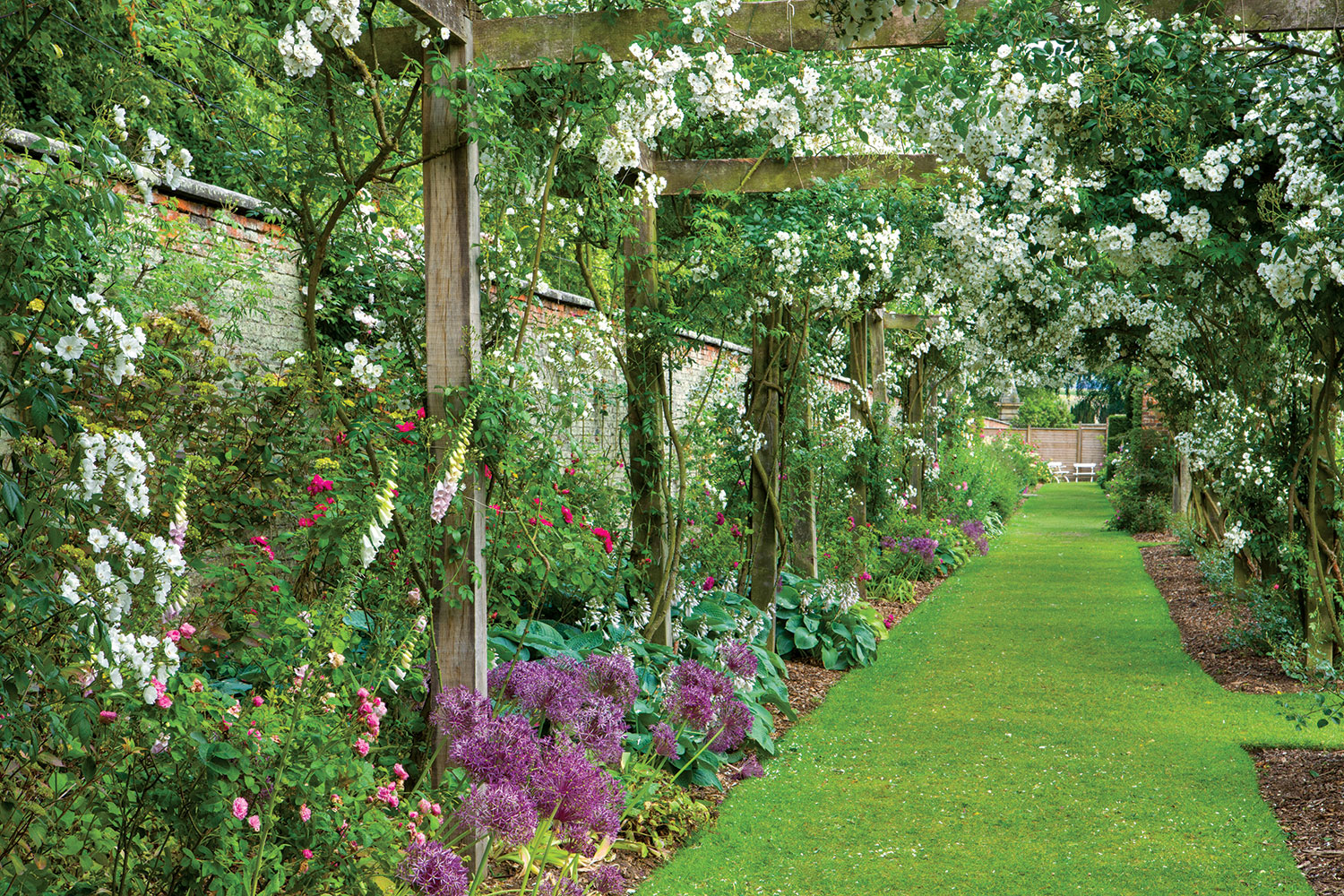 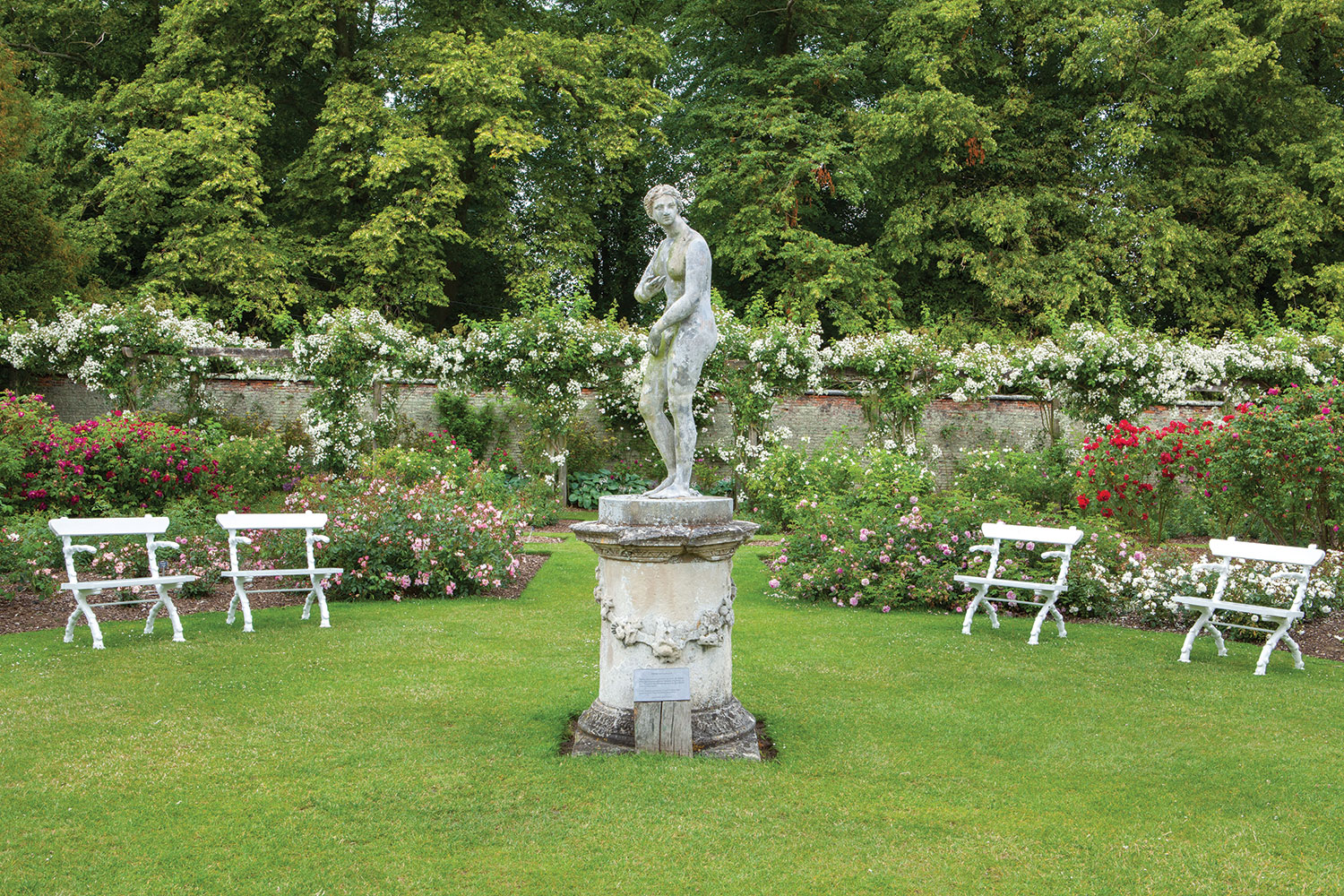 Across the wall of Castle Howard's Rose Garden the fragrant roses frame a graceful Italianate sculpture of a woman. Photo by Marianne Majerus

Castle Howard, an English baroque manse with a massive central dome, consists of 145 rooms filled with fine tapestries, furniture, and paintings by Peter Paul Rubens, Thomas Gainsborough, and Joshua Reynolds, among others. “A palace, a town, a fortified city,” gushed Horace Walpole upon seeing the immense structure for the first time. Construction began in 1699 under the 3rd Earl of Carlisle, who enlisted a friend, dramatist Sir John Vanbrugh, to design the castle. Completed more than a century later, long after the earl’s death in 1738, it has been home to a branch of the Howard family for more than 300 years. Second only in size to Blenheim Palace, the estate is known to film and television audiences as the set for several movies, as well as the 1980s TV miniseries Brideshead Revisited (an adaptation of Evelyn Waugh’s book by the same name).

Within the Capability Brown–designed parkland (Brown is considered the most influential English landscape designer of the 18th century), head gardener Alastair Gunn and 10 others oversee 1,000 acres of gardens. The team cheerfully copes with the challenges of Yorkshire’s sometimes capricious climate, while following Gunn’s directive “to try to provide the color the public always comes to see.” He explains that his overarching task at the moment is restoring the Rose Garden. His team is in the process of removing some of its 2,000 roses, mixing old with new varieties. “People come for historic landscapes and grand monumental gardens. Some come for roses; others, for vegetables. We have to be aware of it all,” says Gunn.

After a house tour, which sets the stage for understanding the grand scale of life here through the ages, visitors in a hurry should hop the little open-air train that toots all around the property for a glimpse of the important gardens. More leisurely guests can wend their way through multiple botanical and sculptural venues on foot. 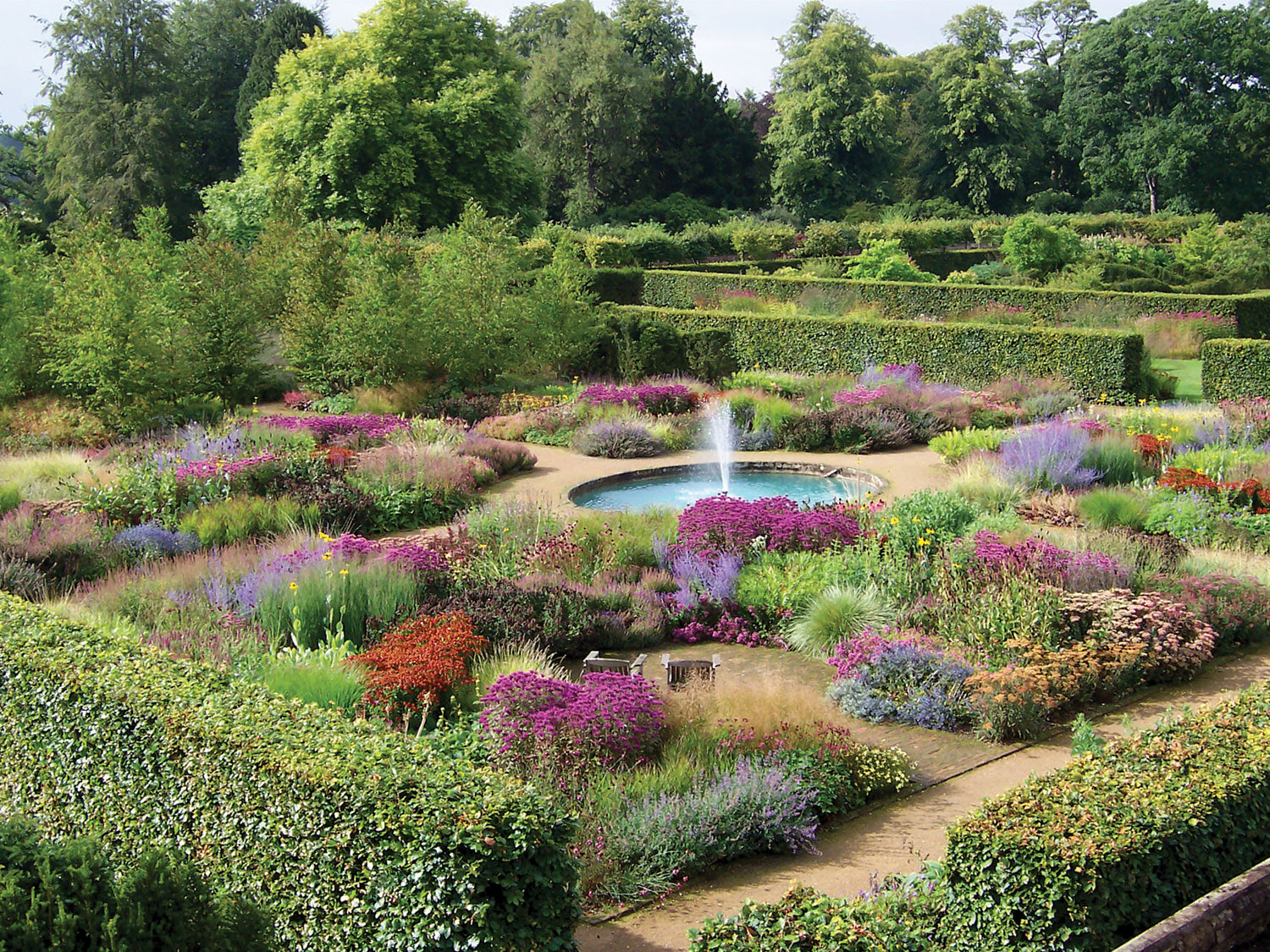 Piet Oudolf’s garden masterpiece evolves as a joyous scene of modern ‘Prairie Gardening’ comprising swaths of different grasses and perennials. The naturalized planting creates an elongated season of interest during which every leaf, flower head, and stem are as important as its color and scent. 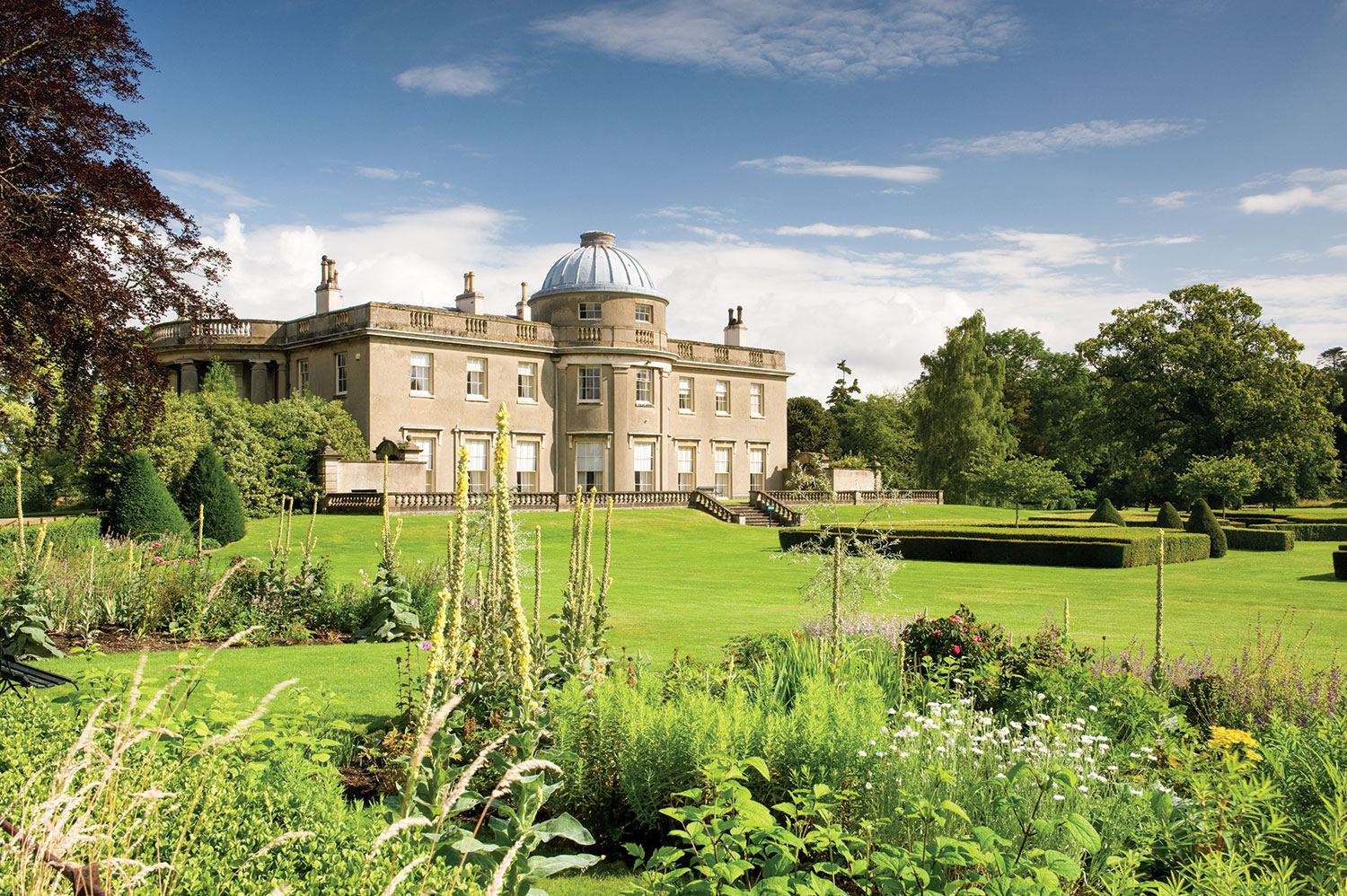 The back of the house at Scampston Hall overlooks an intricate boxwood parterre and the broad, sloping lawns of 18th-century Capability Brown-designed parkland. 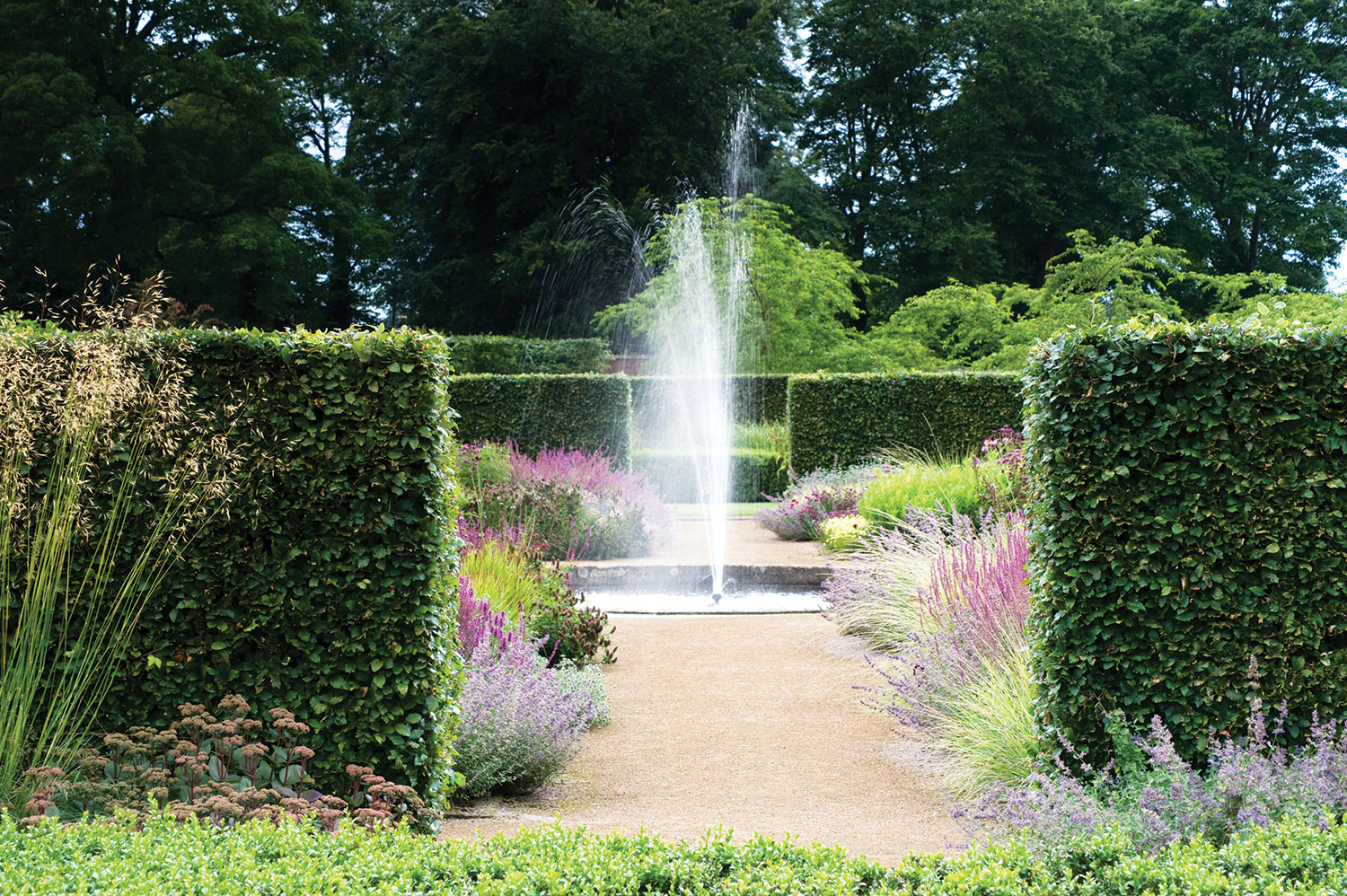 A hedge opening in the Walled Garden at Scampston Hall offers a view of the fountain. 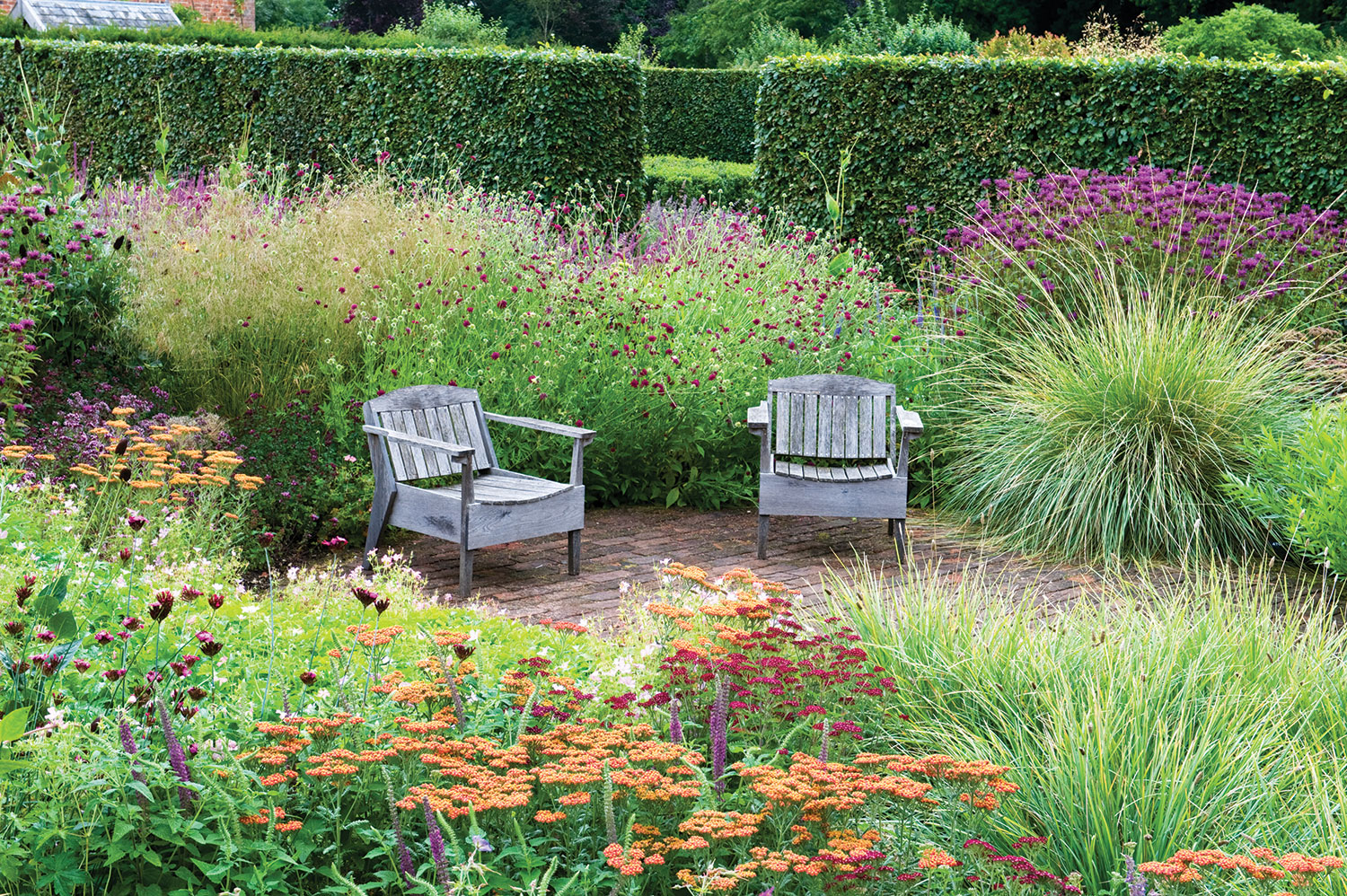 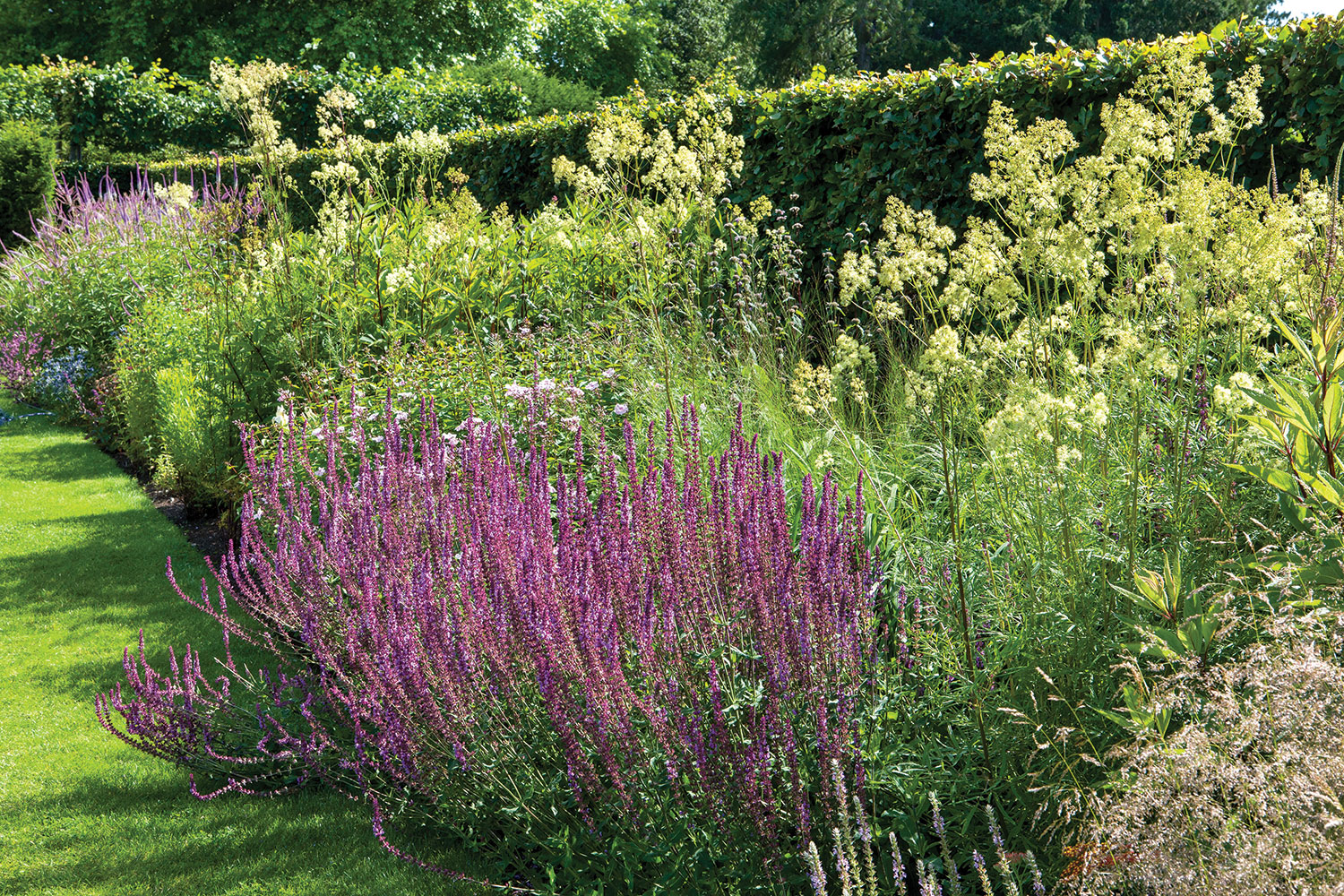 Spirited borders are full of the plantsman’s characteristic palette of soft-hued perennials and drifts of ornamental grasses. Here, thick clumps of white meadow sweet (or mead wort) contrast with a burst of exuberant salvia. Photo by Marianne Majerus

The regency-style Scampston Hall presides over another notable park designed by Capability Brown with lakes and gardens that include a Palladian Bridge, which makes a grand architectural statement above the water. Stroll the Cascade Circuit walk to visit the traditional gardens around the house, including the Rock Garden, recently planted with over 5,000 spring bulbs, and the Woodland Garden.

Today, the most attention Scampston receives springs from its Walled Garden, designed by Dutch garden designer Piet Oudolf, who was catapulted into fame after his radical installation of the High Line park in Manhattan. Set within the 18th-century walls of the old Kitchen Garden, Oudolf’s creation is a design narrative full of surprises, with a contemporary feel that coexists perfectly within its proximity to the Brown park. The space is divided into distinct garden rooms, each with its own character. “It is a good example of establishing a microclimate where the walls offer protection while a stand of trees in front of it prevents a tumbling effect by the wind to destroy the plants and grasses Oudolf so carefully arranged,” says Phibbs.

Then-owner Lady Caroline Legard explains that she first encountered Oudolf ’s work at the Chelsea Flower Show. She says she was intrigued by his philosophy, which is often described as “Prairie Gardening,” and felt it could be an interesting look at Scampston. His design was conceived in 1999.

Scampston’s noble experiment garnered attention and accolades. Years later, Oudolf ’s gardens are mature and established oases on the property with fountains and reflecting pools. If you come in spring, be prepared to be overwhelmed by pale, fresh pinks; in summer, it’s all about violets and purples; and autumn ushers in swaths of honey-colored grasses, such as the dramatic Molinia caerulea ‘Poul Petersen’ moor grass that runs through the close-mown lawn.