In an era when almost everything, including design, is widely accessible via the internet and social media and trends come and go in the blink of an eye, interior designer Richard Keith Langham is a refreshingly established presence with a rich and timeless style. There is an erudite gravitas to his work, balanced by an adamant refusal to take himself too seriously.

His roots are in the Deep South—Brewton, Alabama, to be exact, which he credits in part for his interest in interiors. “I used to say that when you grow up in a small town, there isn’t anywhere to go but your own house, so it better be pretty,” he says. “But there were actually a number of beautifully appointed houses that piqued my early interest.”

Langham’s resume includes Parsons design school; an early and invaluable apprenticeship with the legendary Mark Hampton; a significant stint with English-country- house aficionado Keith Irvine; and a year spent studying in England. It’s no surprise then that his interiors speak with a decidedly British accent. When asked about his retreat on Long Island, he breezily responds, “Oh, the Witch’s Hat House? It’s nothing fancy, just a place for me to spend weekends and have casual suppers with friends. You know, the cobbler’s children have no shoes. My house is a mish-mash of castoffs from jobs, some heirlooms that need slipcovering, and the very first pair of Christopher Spitzmiller lamps.” It sounds like the essence of that nonchalant, faded elegance so unique to British sensibility. Tucked behind a signature Hamptons hedge, the chocolate-shingled, salmon-shuttered American Queen Anne–style “Witch’s Hat” trumpets a sense of playfulness, charming all who approach.

The pool house, situated at the end of the lawn facing the pool, is dressed in blues and whites and provides a cool respite on a summer’s day.
Langham loves the Southern accent of a magnolia bloom floating in a bowl.
Langham often serves predinner drinks in the tented pavilion by the pool. The plastic pink flamingos keep things playful and fun.

On summer evenings, the designer favors dining alfresco. The soirée generally begins with cool drinks and light hors d’oeuvres in his tented pavilion overlooking a pool framed by four plastic pink flamingos. The birds provide a nod to Langham’s sense of humor and whimsy. Guests then amble over to the wraparound front porch and gather at a round table for one of Langham’s delicious and simple suppers of fresh cream of squash soup with scallions, chicken paillards, arugula and tomatoes, and asparagus, with a dessert of mango sorbet and gingersnaps. There are always flowers on the table and throughout the house. The host cuts from copious drifts of hydrangeas in the garden and loosely arranges them in an assortment of witty and artistic containers.

“I’m absolutely addicted to hydrangeas. They grow all summer long here, and I adore their big, showy blooms and the fact that I don’t have to do much to keep them going,” says Langham. “I tend to like monochromatic arrangements or the same shade in different values.” He also calls in Michael Grim of The Bridgehampton Florist to work his magic in a more elaborate way when the occasion calls for it. The table is generally dressed in one of the designer’s exotic textiles found on his many travels or a cheerful floral-print fabric repurposed as a tablecloth.

Langham’s alfresco evenings are a rich stew of ocean breezes; candlelight; a playlist of standards, jazz, and Motown; good food; pretty flowers; and a steady stream of lively conversation. “I love an ambience that wraps its arms around you,” say Langham, “where everyone feels welcome, special, and just a little bit spoiled.” Southern hospitality to a T. 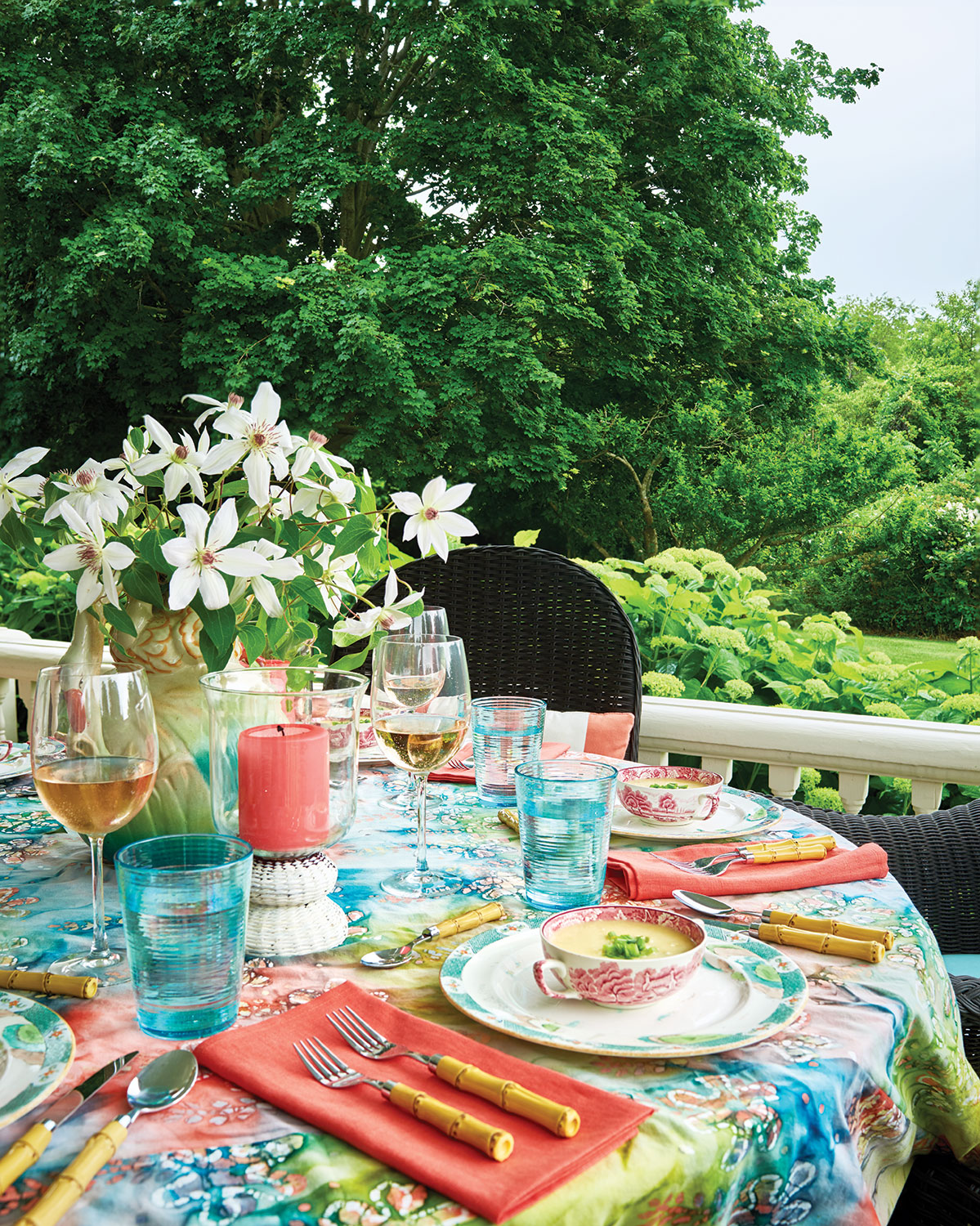 Langham sets a cheerful, inviting table for one of his summer suppers with an informal cluster of clematis spilling over the top of a pitcher. 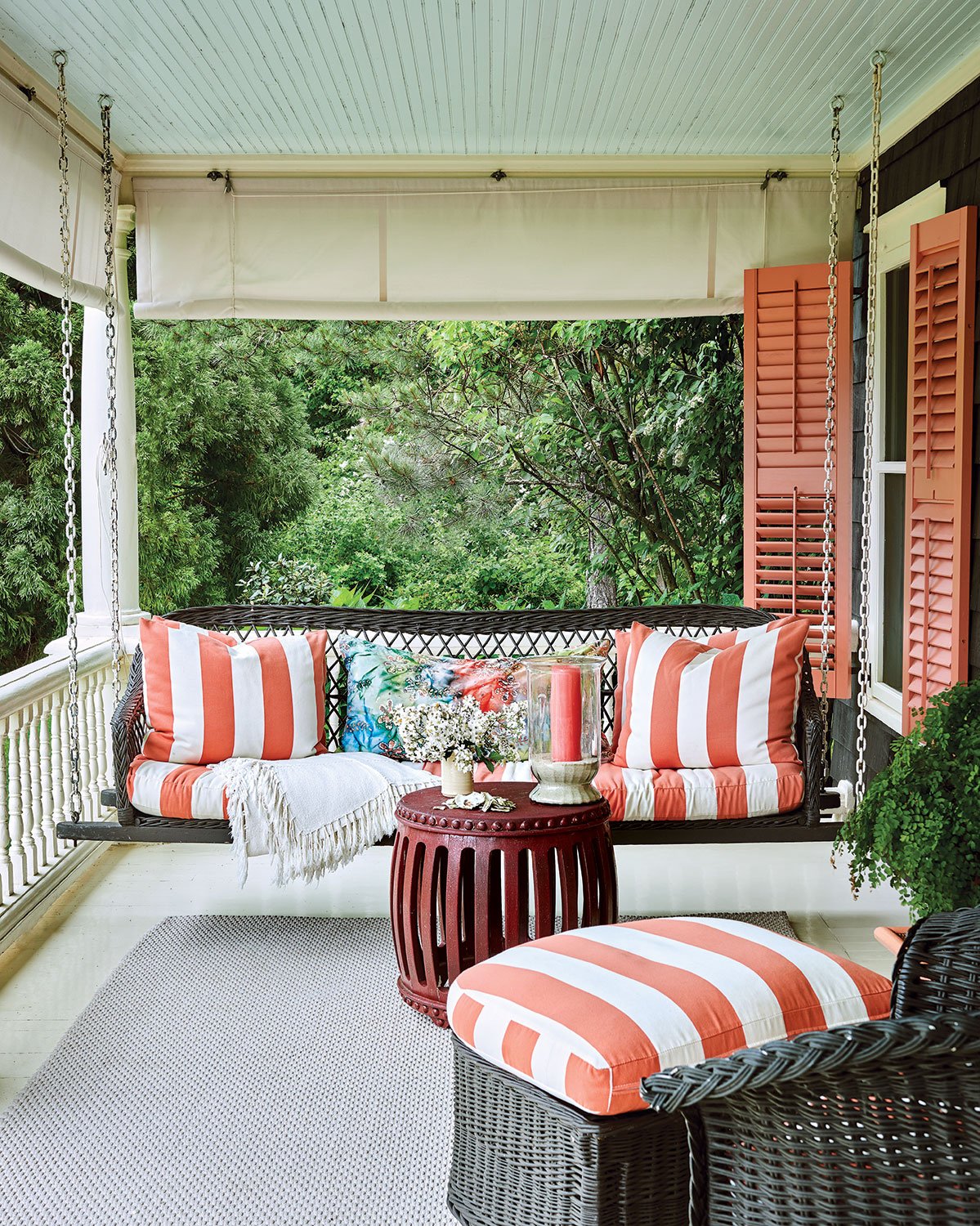 Antique wicker furniture, painted to match the exterior of the house, sports cushions in a lively salmon stripe. 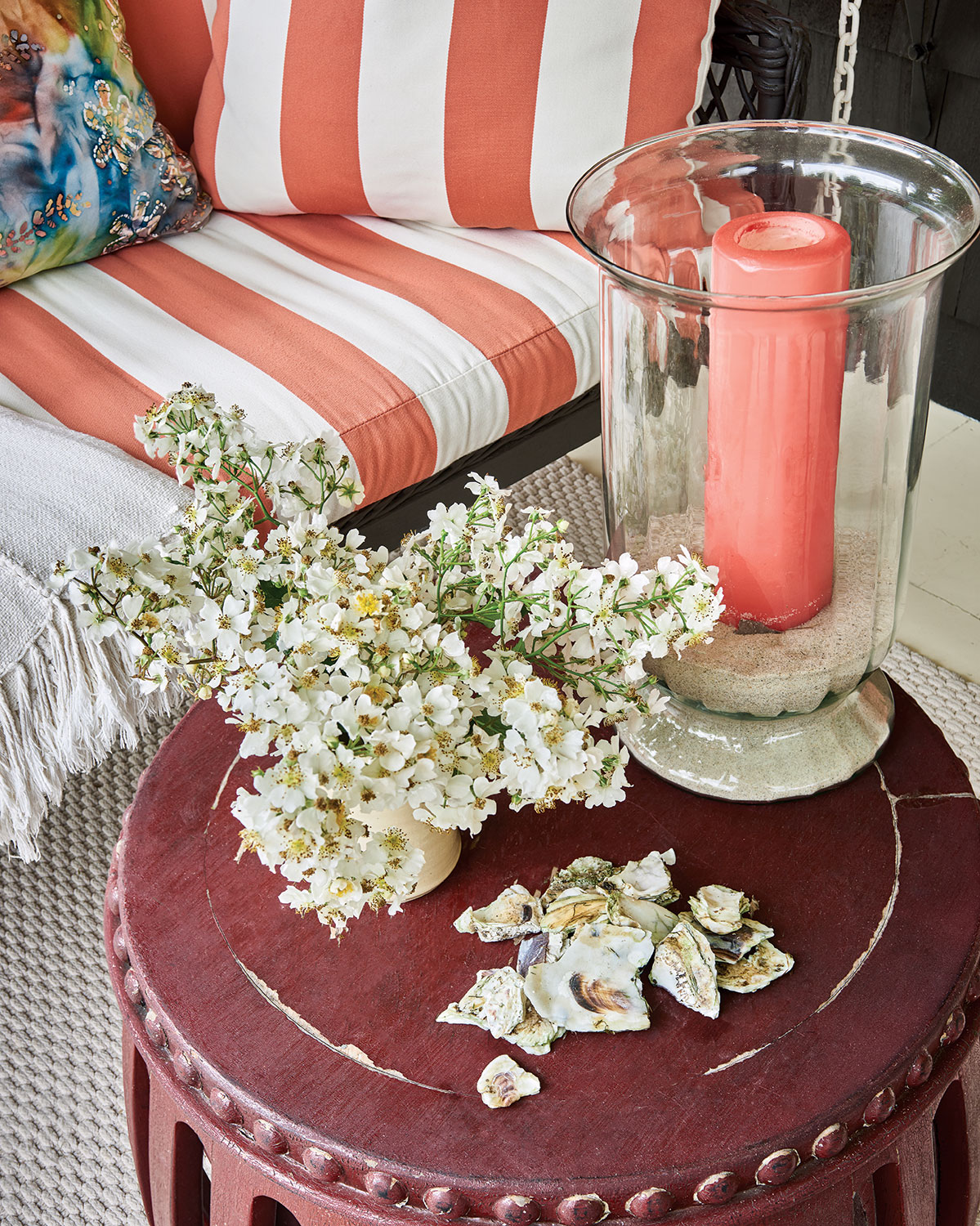 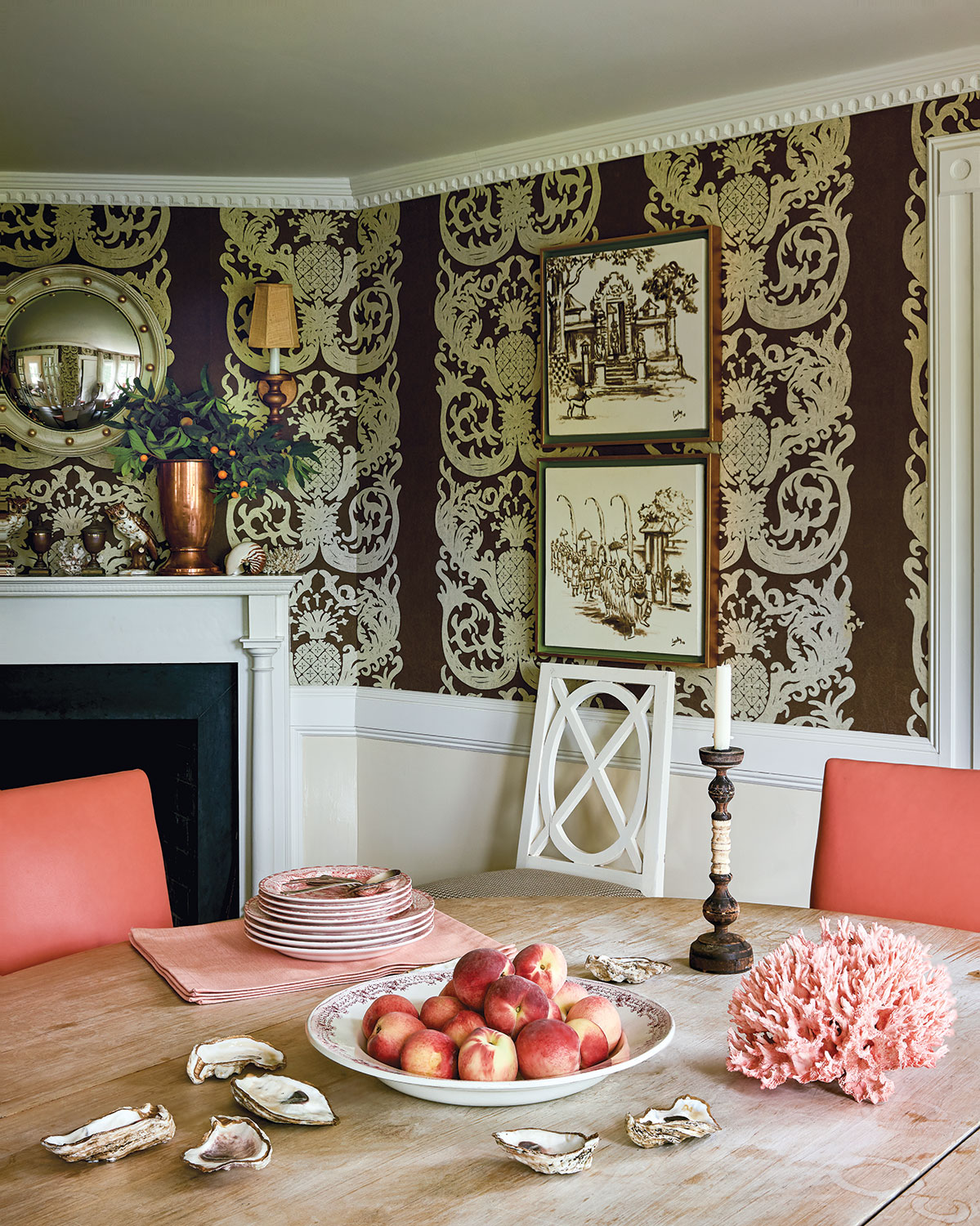 Peaches, a piece of coral, and ceramic oyster shells decorate the dining room table, which is used as a staging area in preparation for dinner on the porch.