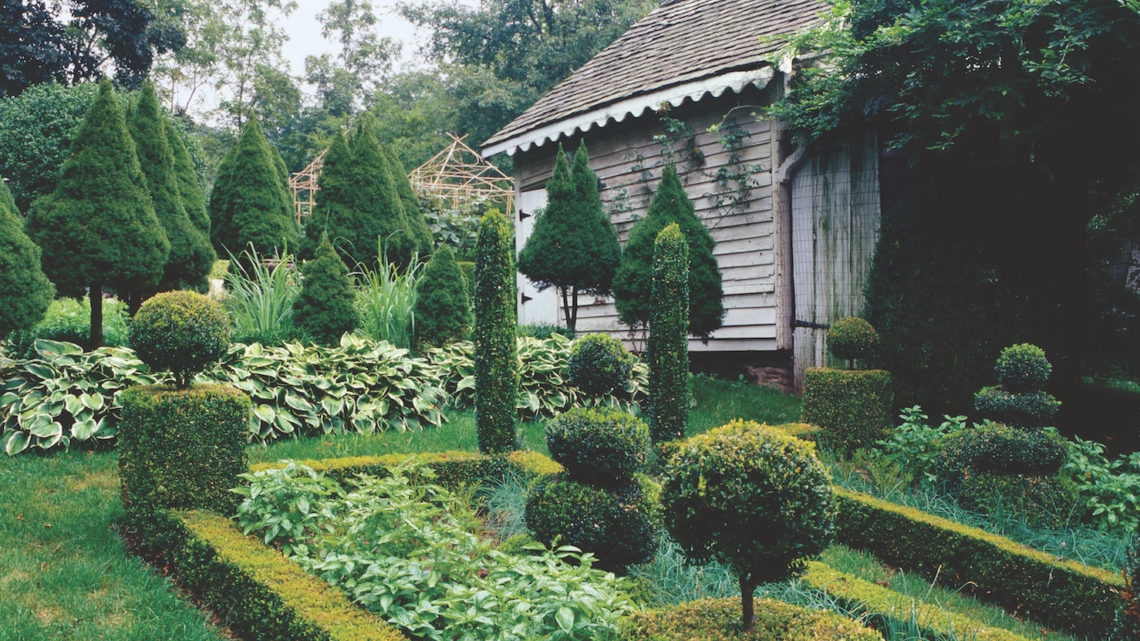 When [Renny Reynolds and I] first came to Hortulus Farm, we had no idea what to expect.  Our wish for the farm was simple: a restorative weekend place of greens some distance away from our work-a-day lives in New York City.  That was nearly ten years ago and, it seems to us now, about a million lifetimes. 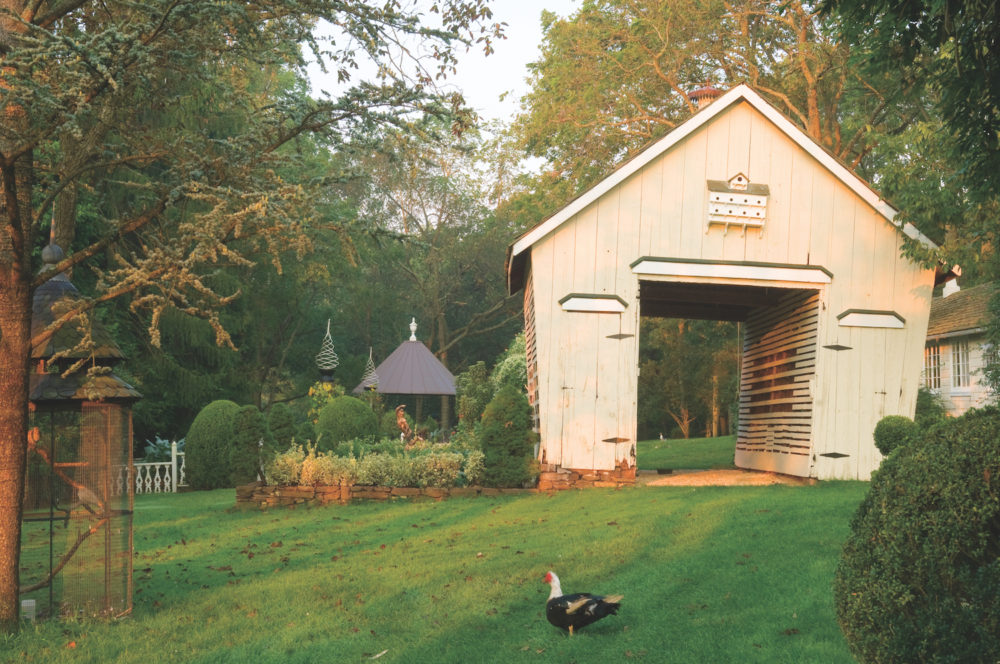 Near the corncrib area, a Muscovy duck ambles over to a dovecote. A vegetable garden and aviary housing decorative pigeons sit to the left of the corncrib.

The property that ultimately succeeded in capturing our attention would undoubtedly surprise many.  Frankly, it surprised even us. It was a large working farm of ancient vintage reduced to such a state of dereliction that it had been sold at a sheriff’s sale in 1933 for the sum of $370.91 and was known locally as “Skunk Hollow.”

Upon our arrival that fateful day in 1980, we found collapsing outbuildings, ponds silted in with saplings as thick as wrists sprouting from the resulting bog, and holes in big enough to drop a large dog through in the roofs of the two immense dairy barns.  It was not what you would call auspicious. 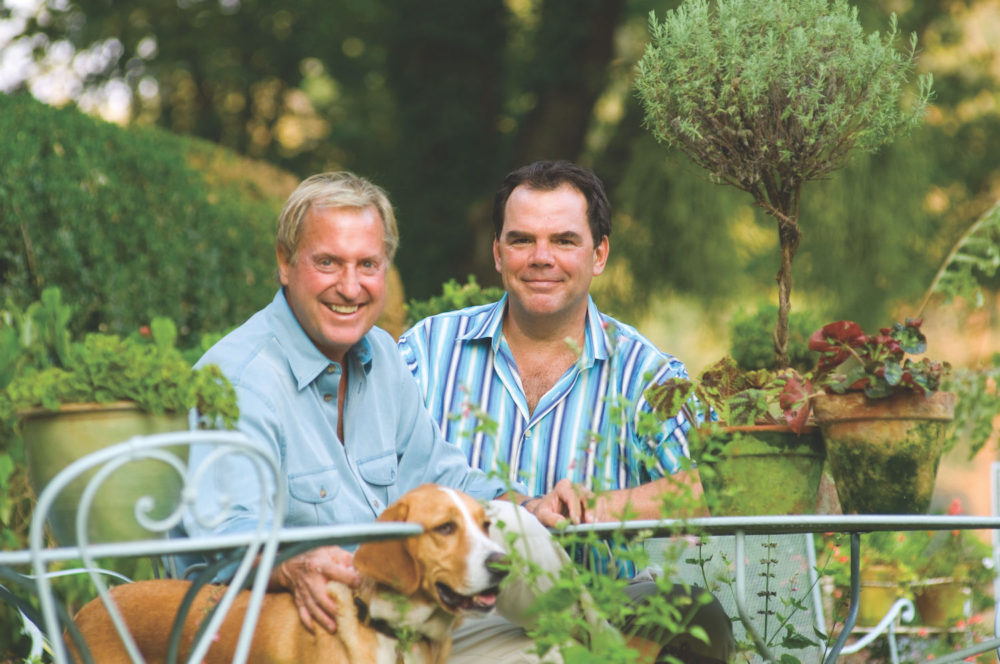 Here, however, let us roll back time to a pivotal moment in 1690.  William Warner, formerly of Blockley in England purchased three hundred acres of prime Bucks County land from William Penn in the newly established   tract bestowed upon him by his king, which he called “Pennsylvania.”  Imagine a softly rolling parcel of woodland a few miles west of the Delaware River, soon cleared for pastured and farming creasing into a wonderfully isolated little valley.  Conjure up a classic Bucks County stone house built on the banks of the charming Fire Creek that ran through the property.  The first section, a modest one room cabin, was completed in 1723, then subsequently added to in 1746, and again in 1797, the last a courtly box of a dwelling with substantial cornerstones and a fine paneling stained “original blue” with essence of blueberry.

By 1860, two magnificent dairy barns had been erected on the property, followed by outbuildings for keeping milk, sheds for carriage and equipment, and a corncrib for storing winter feed for the herds.  The Warner family prospered in this close-to-idyllic setting for six generations until 1918 when the fortunes of the family took a calamitous tumble. 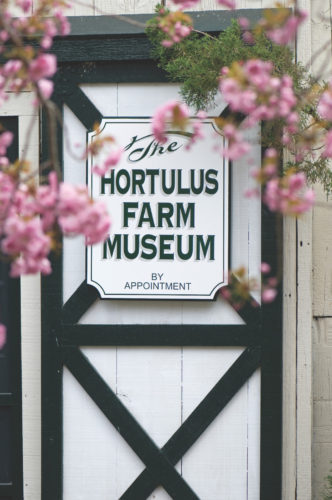 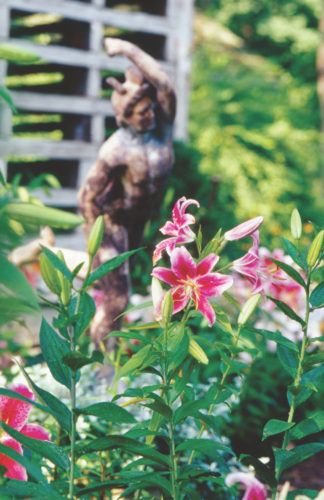 In the lily garden, Stargazer lilies surround a lead statue of Mercury.

After 228 years if proud stewardship, they were forced to sell their historic homestead. Then in 1929, the Great Depression tore through any remaining solvency of the county. You know the rest.

When we arrived, we inherited not only a good amount of achingly large-scale disrepair, but also an almost overwhelming tangle of grapevine, bittersweet, and multiflora rose, which threatened to consume the remaining fifteen acres of the property.  For a while, our time centered on ensuring the barns and outbuildings didn’t collapse and attempting to divest their stalls and interiors of the piles of rural debris left by the farm’s multiple 20th century owners.  In the first years, however, Providence also smiled upon us and we were able to purchase two more substantial, contiguous parcels of the original property.  As those were cleared, we finally began to conceive what would become our gardens. 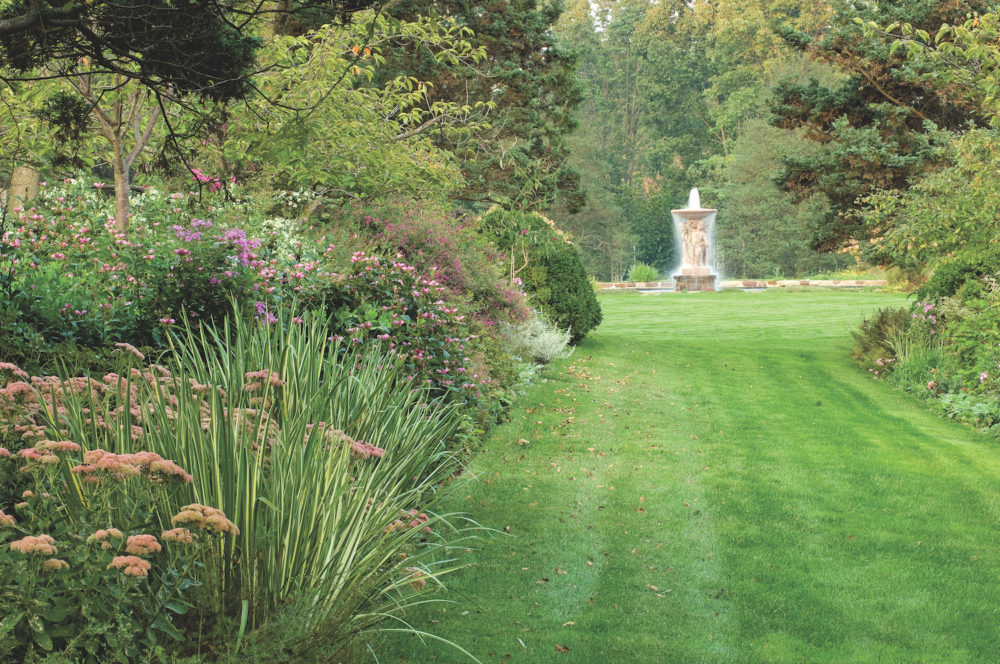 The perennial borders lead out to the pool garden, planted in a soft pastel palette of pinks, blues, whites, and grays in the form of Sedum ‘Autumn Joy,’ Phlox, Lythrum (purple loosestrife), and Fairy rose.

First, a plan emerged for a pair of perennial borders leading out from between the dairy barns into the former dairy pasture.  Then, we envisioned the white picket-fenced vegetable garden set up high on the rise above the house.  The woodland walk would involve re-dredging the non-existent “lake” that appeared on the map we had inherited from the previous owners, unearthing snakes and snapping turtles, and a truly god-awful stink.  We had no grand scheme at first: we would just arrive each week from Manhattan and attack, wrestling one overgrown patch into submission, then moving on to the next. 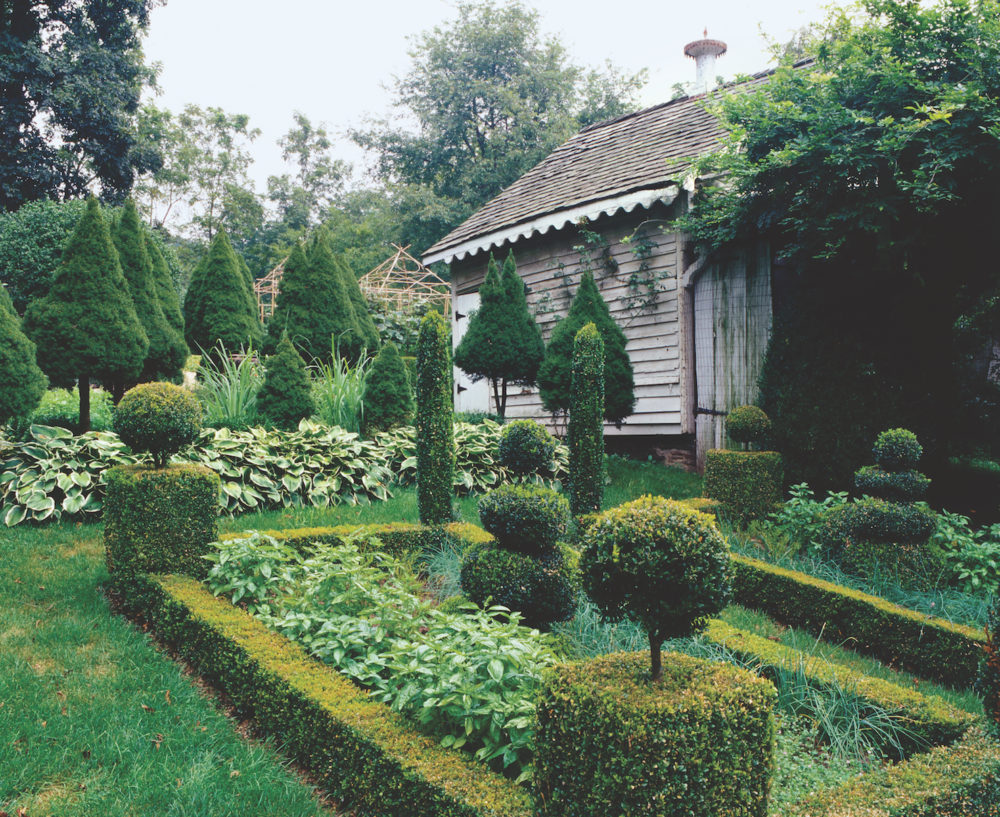 Two parterres edged into rectangular form contain box topiaries and plantings of basil, chives, and sorrel. The parterres lead up to the main herb garden, accented with Hosta and peppered with dwarf Alberta spruce, by the chicken house.

We drew any gardening inspiration from an English model: Lancelot “capability” Brown, William Nicholson, Gertrude Jekyll, and our mentors Rosemary Verey and Christopher Lloyd.  Not only were we most familiar with their style, but we also felt that it was the approach most suitable to our 18th Century Pennsylvania vernacular (versus a French or Italian model).

“Hortulus means ‘small garden’ in Latin, and, as we are a collection of small gardens, we liked the slightly academic feel of it.” – Jack Staub

However, as we envisioned, we looked to loosen up classic British structure a bit so as to make it more appropriate to the farm’s own unique personality: for, surly, the extraordinary cluster of American architecture at the heart of the property guided our hand. As Gertrude Jekyll opined, “the garden must always curtsy to the house,” and so ours does.  Everything includes it, radiates from it, leads back to it, and pays it the homage it is due. 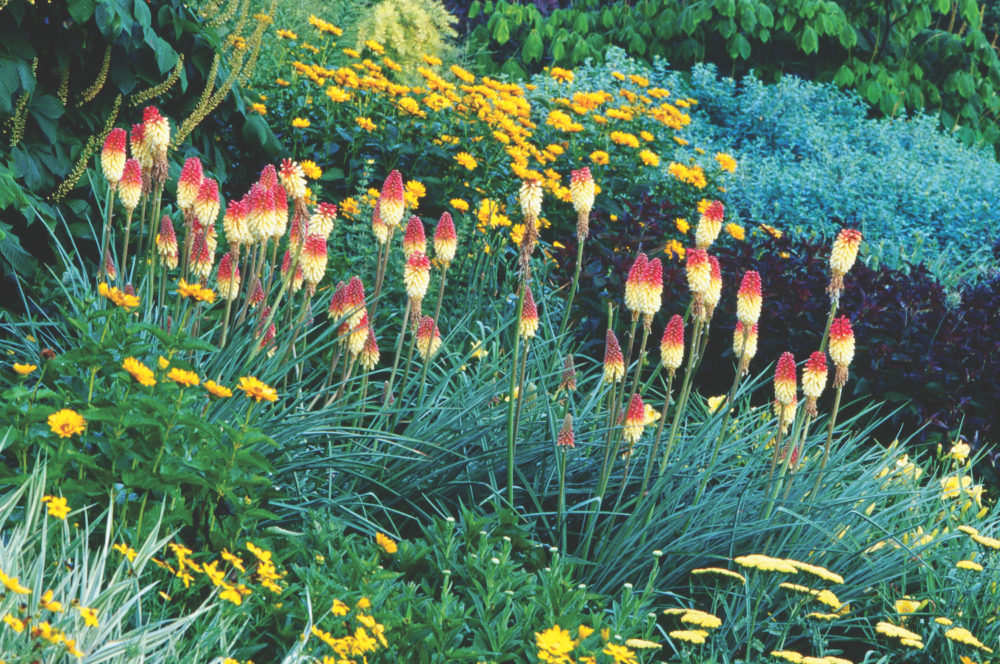 On the other hand, we have not been afraid to push the envelope a bit, usually with a strong dose of international whimsy attached, as in our “French” and “Italian Gravel” gardens.  Our farm is certainly a work in progress, as we are always adding and subtracting, re-envisioning and repurposing.  We redesigned the vegetable garden in 2000 using a scheme of raised timber beds and gravel paths that has proved to be very successful, not only in terms of aesthetic, but also in ease of gardening.  A new exotic fruit border just went in last fall by the vegetable garden rooms. 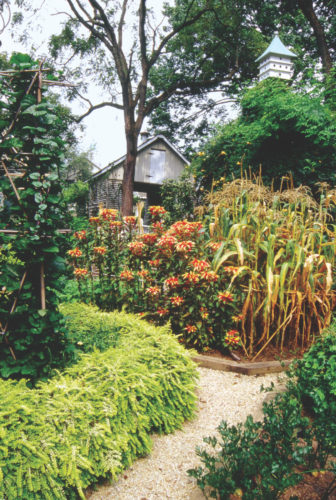 The vegetable garden foreground offers up Lonicera nitida ‘Bagessen’s Gold’ surrounding a bamboo trellis planted with beans and Malabar spinach. In the background, corn and Amaranthus ‘Joseph’s Coat’ predominate, and to the left, trumpet vine covers the arbor.

We now have a total of 20 separate gardens encompassing roughly 30 of our 100 acres: an herbal knot garden on the old stone foundation of a former equipment shed, a birch lane leading up to our nursery operation, and a heat-loving rock garden encircling our swimming pool.  Our “French” garden surrounded by rose hoops centers on a miniature Eiffel Tower we purchased on a trip to the English Cotswolds.  A series of trellised “rooms” and island beds accommodate the vegetables that refused to grow in the kitchen garden while a shady stream walk climbs over a succession of rustic bridges.  A yellow and variegated foliage garden rests in the heart of the woodland and a pair of summer borders provides an exuberant palette of reds, yellows, and oranges… 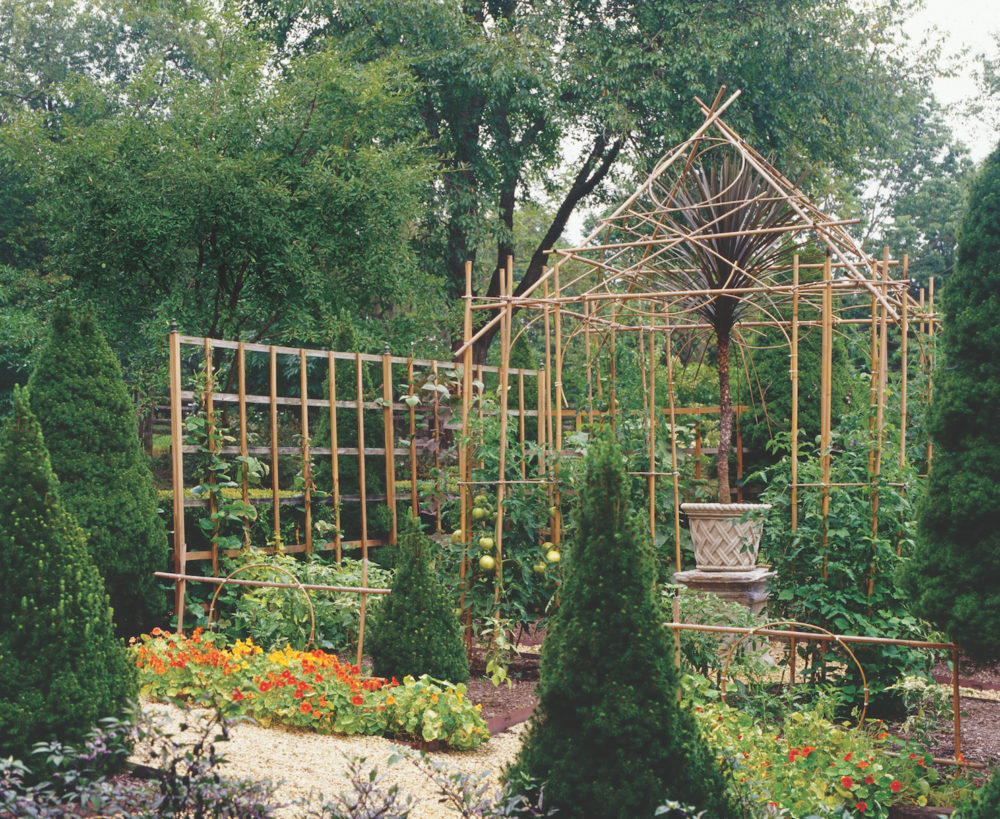 Somewhere along the line, the careers we had matured for so long in Manhattan started to take a back seat to our involvement in the gardens.  And, somewhere along the line, we gave in to this shift in priorities.  We moved out to the farm permanently about 10 years ago and both began second, intensely satisfying careers.  Renny returning to fine garden design, me to writing, and both of us took to lecturing about the gardens that have become our passion. 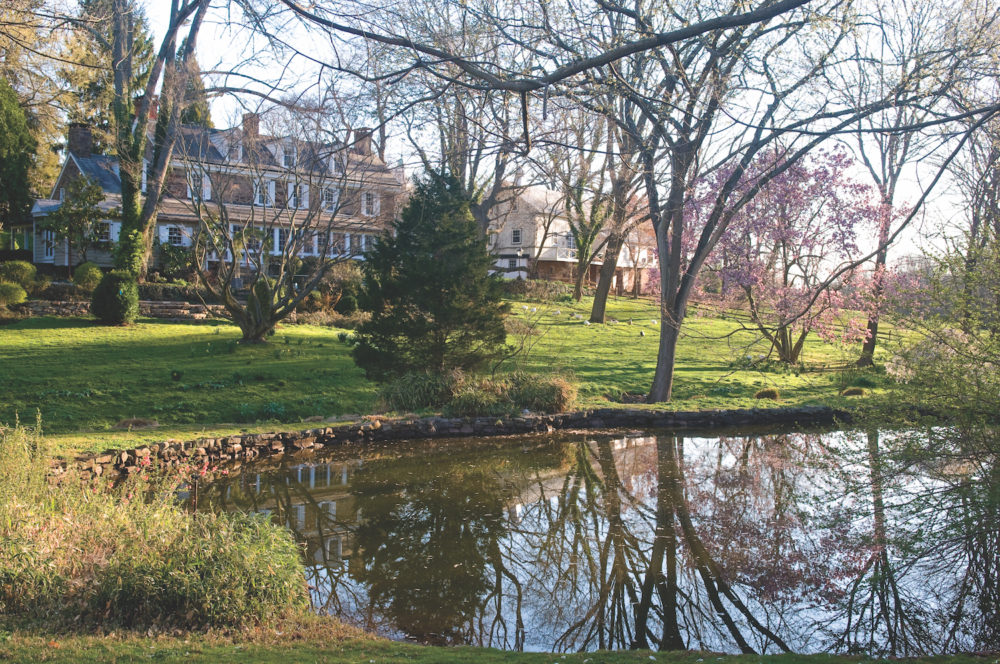 Our house, officially the Isaiah Washington House, was added to the National Register of Historic Places in 2004, and we now have an upwards of 50 horticultural groups and garden clubs visiting us every season.  We relish our roles as stewards of this magical, historic property we were so lucky to chance upon so long ago, as we relish equally the chance to pass it along to future generations. To that end, we established the Hortulus Farm Foundation to usher in the new millennium, and our plan is to leave the farm a public garden and horticultural center in perpetuity.  From a simple wish a dream grows; it has been a lovely, truly life-changing ride.