In the Garden with Charlotte Moss

When New York designer and author Charlotte Moss needs to relax, recharge, and refuel, she heads to the garden of her East Hampton getaway, Boxwood Terrace 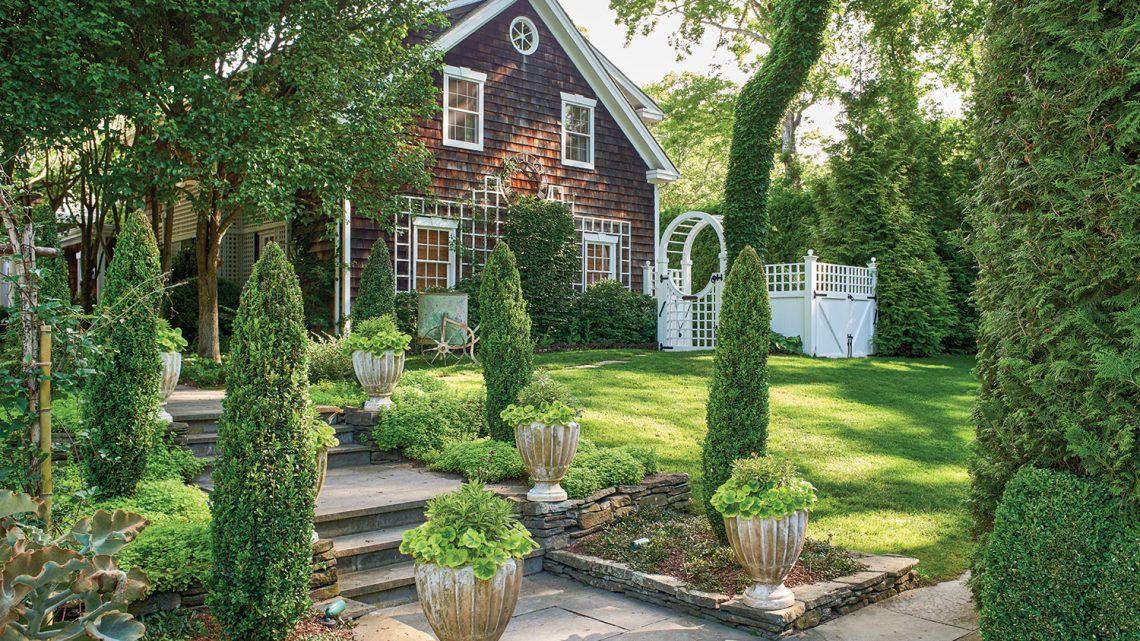 After a hectic week that might entail a house installation, a presentation on her latest book, and scheming new designs for her various product collections, designer Charlotte Moss pulls into the the driveway of her home in East Hampton. In what seems like a New York minute, she kicks off her heels, slips into comfortable clogs, and makes a beeline to the flower room to grab a basked and a pair of clippers. “Before I even go upstairs to unpack my bag, I head straight for the garden,” she says.

Daisy and Buddy, Moss’s faithful Cavalier King Charles spaniels, scamper alongside, as happy as their owner to leave city life behind for fragrant English roses and boxwood, meandering pathways, and plenty of nooks and crannies that demand further investigation. “I stroll the garden to see what’s happening and in bloom, and start cutting to make arrangements for the house,” says moss. It’s a ritual that signals the weekend has begun. 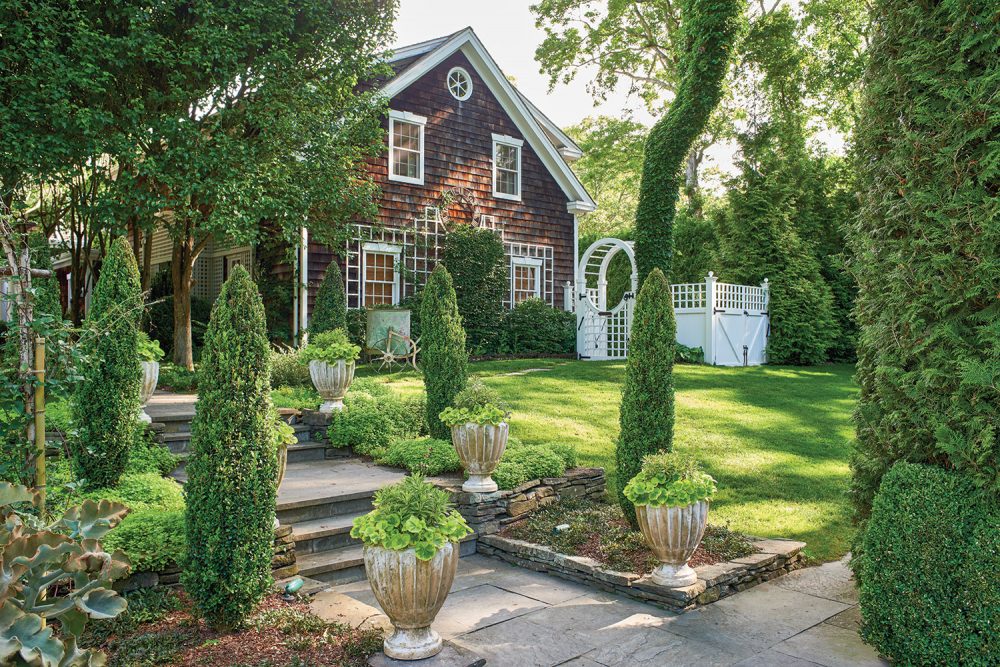 Stone steps and a parade of urns and cypress lead from the main house to the pool house.

When Moss and her husband, Barry Friedberg, found what they now call Boxwood Terrace, it was a somewhat unremarkable spec house on three sprawling acres that featured virtually no landscaping to speak of, other than a handful of oak trees, a pear allée, and an abundance of arborvitae. “It was the view from the living room window to the backyard that captured me. I imagined what could be,” says Moss.

Given her much-lauded talent for creating interiors that are as beautiful as they are livable, it was no surprise that Moss would ultimately transform the house into a place that felt like home. But it was the idea of the garden to come–the first on of her own–that excited the designer most, a blank canvas where her artistic touch and passion for detail could really take root.

Explore the Garden with Charlotte Moss

Hidcote Estate and Nancy Lancaster's Haseley Court, both in the English countryside, inspired the color of the moon gate in the kitchen garden.
See Nancy Lancaster Designs

In the kitchen garden, a zinc pot is planted with variegated-leaf geranium. All the pathways are created with oyster and clam shells.

The designer refers to her flower room as her therapy room. “It’s where I go to putter, select a vase, listen to music, and power down,” she says.

Arranging flowers from the garden is another way designer Charlotte Moss unwinds.

On the terrace, urns of boxwood flank the door to the living room.

When houseguests are along for the weekend, Moss indulges another passion: setting a beautiful table for an alfresco meal.

A buffet of fried chicken and other classic southern dishes awaits guests.

Moss fills a Chinese fretwork piece from the estate of Bunny Mellon with potted ferns and large-leaf begonias.

The pool house features pops of pink and a photograph by fashion photographer Louise Dahl-Wolfe.

A pink McCartney Rose softens the stone of an antique sundial nestled in a hedge of golden yew.

Charlotte Moss was so enchanted with the willow structures at France’s Prieuré Notre-Dame d’Orsan that she asked the head gardener, Gilles Guillot, to create similar features in her own garden.

Charlotte Moss poolside with Daisy, one of her Cavalier King Charles spaniels. The McKinnon and Harris sofa is a favorite spot to relax.

A canopied chair from Lane Venture, one of a pair, provides respite from the sun. “They’re a great place to have coffee in the morning, and they’re wide enough to get a dog or two by my side, a very important feature,” says Moss.

Moss enlisted the husband­-and-­wife team of Lisa Stamm and the late Dale Booher (she, a garden designer and he, an architect) to guide and assist in bringing her vision to life. As Moss’s interiors do, the garden unfolds in a series of rooms and moments. “I didn’t want one big reveal,” says Moss. “By either having a hedge or a walkway or a structure with something behind it, you’re constantly making discoveries.” Stamm strongly encou­raged Moss to develop a long­-range plan.

“It sounds a bit trite, but it’s so important because of the way things grow. Above all,
a garden requires patience, something that hasn’t always come naturally to me,” says Moss. More than two decades later, their vision has been firmly established, though it may have shifted and sharpened its focus, due to Mother Nature’s necessity or Moss’s never­-ending quest to implement new ideas, many of which she finds on her travels.

“Ultimately, we wanted to feel that we didn’t just arrive at a house; we arrived at the place—one where we could really unwind at the end of a long week,” says Moss. 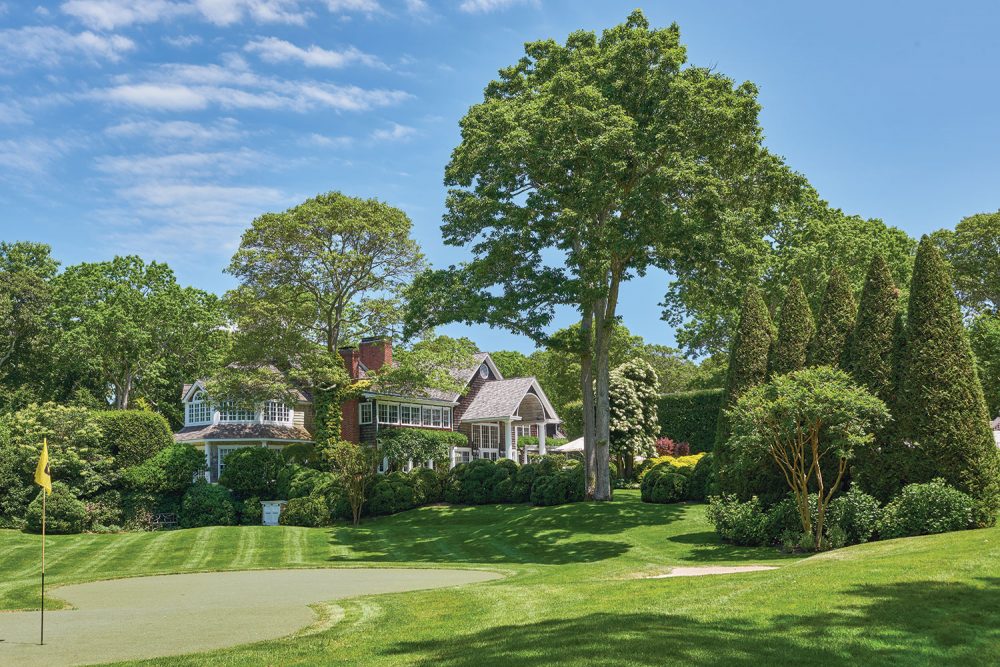 The putting green was formerly a tennis court. “My husband loves to play golf, and I wanted him to be around more,” laughs Moss.

On this particular weekend, with house guests in tow, she arranges Sunday lunch on the terrace, as she often does on a sunny afternoon. Although the mood may be low-­key and the attire caftans and swimsuit cover-­ups, the table is decorated with fine china (of her own design for Pickard) and roses spilling from porcelain baskets. Fried chicken and summer salads will be served buffet-­style, and all is picture­-perfect. Almost. Moss walks over to an urn within her sight line to snap off a dead leaf from a succulent.

Now she can sit down and relax with friends over a leisurely meal. “My husband says I’m visually tortured, but I call it visually blessed,” says Moss, with a laugh. “I tell everyone in my design office if they’re not thinking about the waste­ paper basket that goes underneath that beautiful George III writing table, then they’re missing the boat. The same principle is true in the garden. Paying attention to the smallest of details is just what I do.”