At Skylands, Martha Stewart’s summer getaway on the coast of Maine, the goddess of all things domestic coaxes the grandeur (and granite) of the former Edsel Ford estate to shine once again with the help of her landscape architect 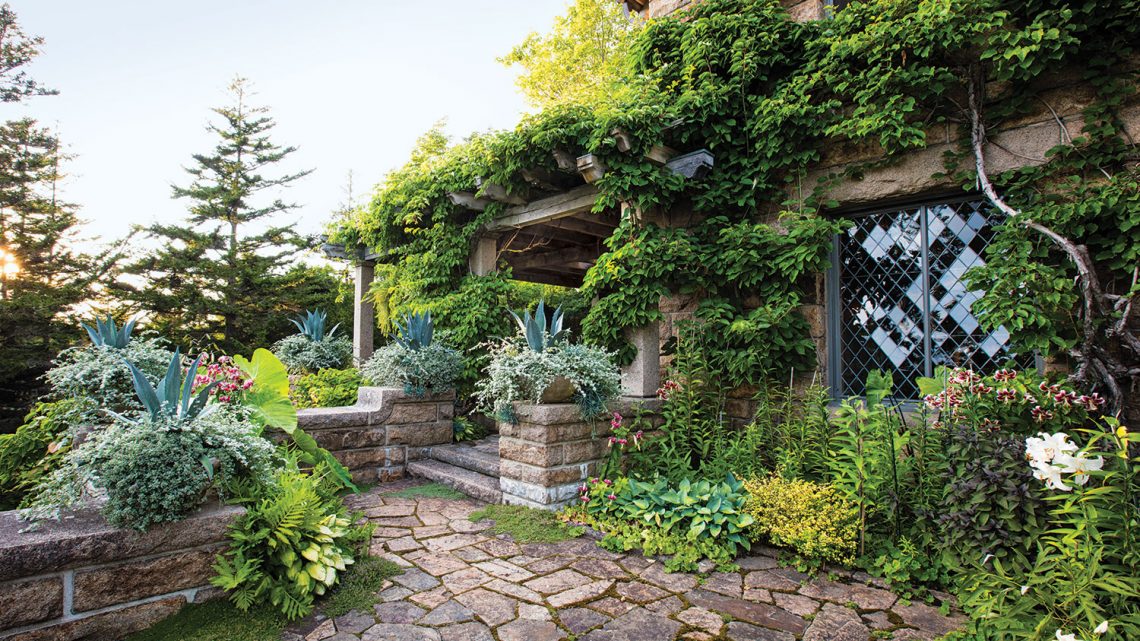 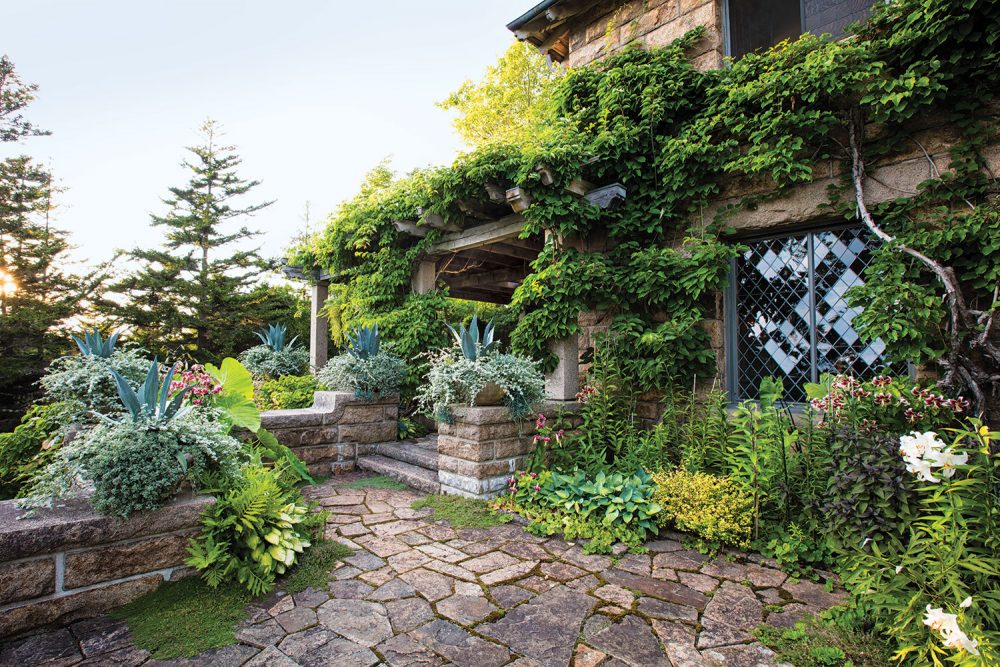 The main terrace is heavily planted in beguilingly fragrant Oriental lilies that blossom in August, when Martha Stewart and her family reside at Skylands. The pink-granite façade is softened by self-adhering Hydrangea anomala subsp. petiolaris, while seasonal containers allow Stewart to indulge her love of non-hardy succulents and agave. 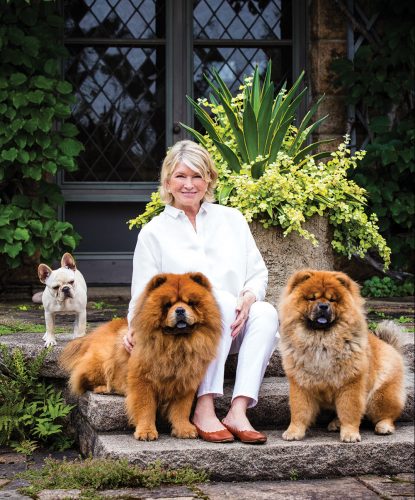 Martha Stewart on the terrace at Skylands, with two of her chows, Genghis Khan and Empress Qin, and French bulldog Crême Brûlée.

The story of Skylands, the extraordinary summer home and garden of Martha Stewart located on the central coast of Maine, demands to be explored as slowly and deliberately as one might maunder its pine-needled paths on a morning when fog has absorbed the very physics of sound. Visiting is a sensorial experience that, in concert with its owner’s awareness of its specialness and within context of her gifted facility, results in a sum greater than its parts.

In all gemstones, the most brilliant facets are triangular, and this triad applies to the glint and glister of Skylands, with equal measures of natural and cultural history and an overlay of significant landscape design.

The quintessence of this landscape, indeed of the entire coast of Maine, was sculpted during the retreat of the Laurentide Ice Sheet about 20,000 years ago. Scoured clean of soil, the peaks of present-day Acadia National Park (now adjacent to Stewart’s property) are what inspired explorer Samuel de Champlain to name the area Ile des Monts Deserts, now Mount Desert Island, when spied from his vessel at dawn in 1604; the barren granitic outcrops remain the first landmass in North America to receive the morning sun. 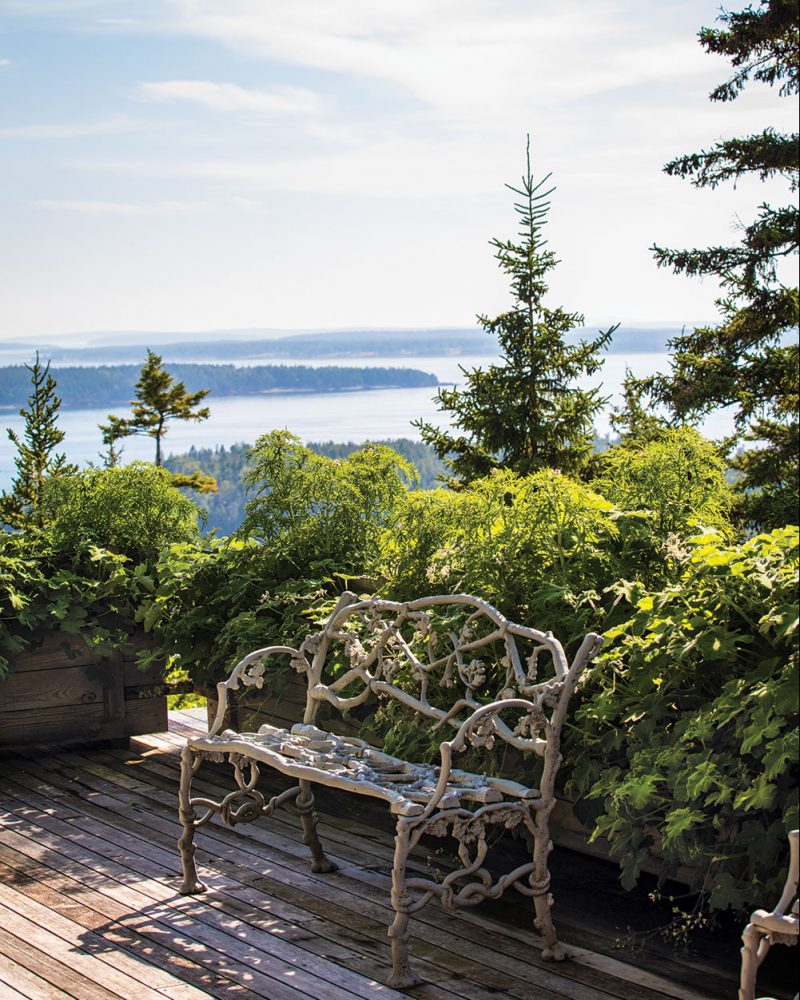 The main terrace at Skylands offers expansive views of the Cranberry Isles surrounding Seal Harbor. The bench is part of Stewart’s extensive collection of faux bois.

It was this same geology that landscape artists from the Hudson River School, including such masters as Frederic Church and Thomas Cole, came to romanticize on their canvases in the mid-19th century. The gathering of peaks and rocky coves secured in oils attracted the so-called rusticators to the wild honesty of the place, which in turn led the upper crust of society to savor in summer the region’s prodigy of nature, cool summers, and fat lobsters. 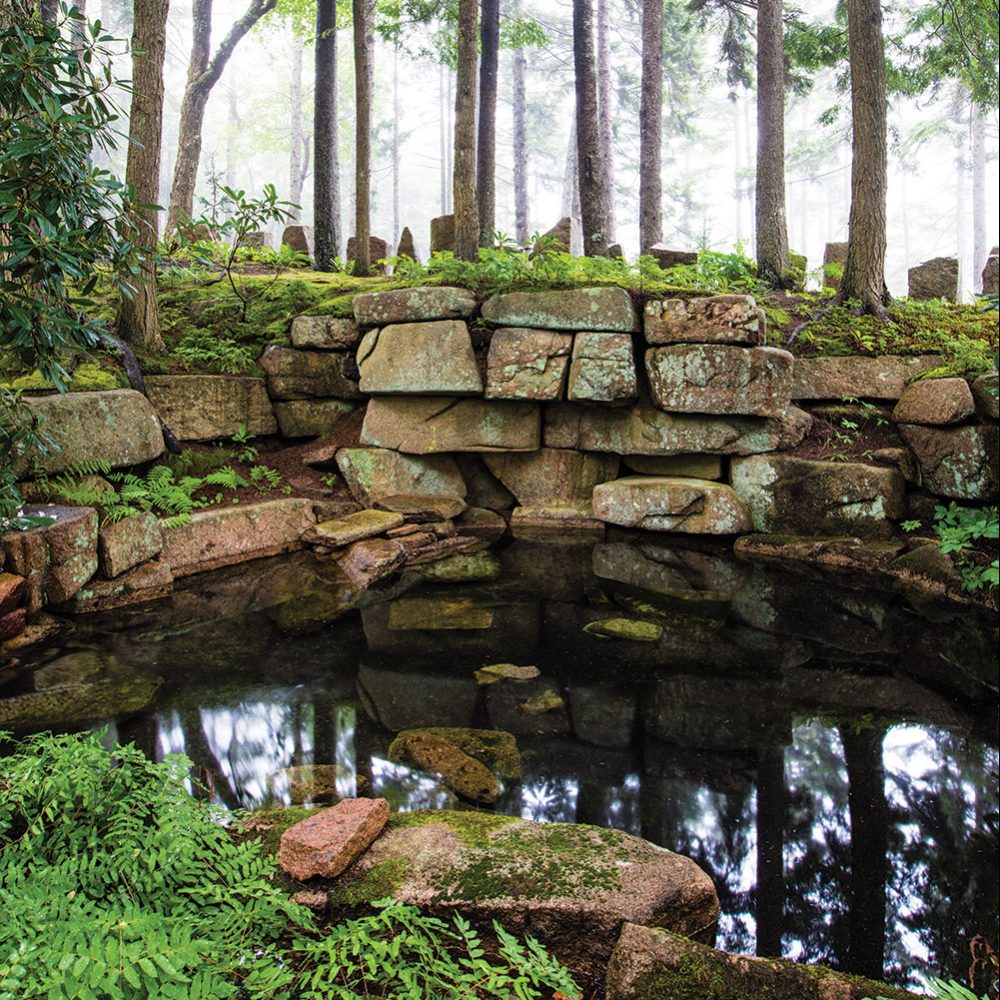 Joining the Rockefellers, Carnegies, Astors, and Vanderbilts, Edsel Ford (the only child of Henry Ford) and his wife, Eleanor, secured what would ultimately total 74 acres above the village of Seal Harbor. Sublimely hunkered upon the landscape and crafted from local pink granite sits a timeless, well-proportioned, three-story main house with adjoining guesthouse, playhouse, and stables designed by architect Duncan Candler and completed in 1926. 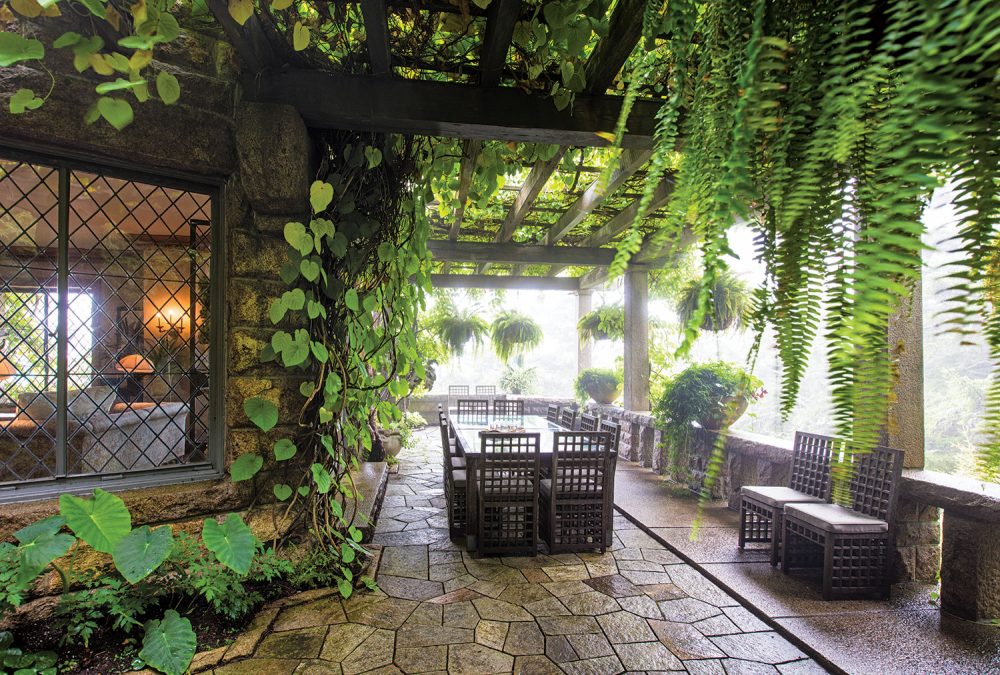 The grotto-like dining terrace, with its vine-clad arbor and hanging ferns, provides respite on warm days.

Enter Danish landscape architect Jens Jensen, noted for his work in the American Midwest. A proponent of the Prairie school of landscape architecture and a contemporary of Frank Lloyd Wright’s, Jensen was hired to lay out the spaces of the estate. He was central to the movement promoting a region’s natural identity and was an early advocate for the use of native plants. Thus the “gardens” he designed for Skylands—his only maritime project—were far less about contrivances and more of an embrace of the natural rock outcroppings and moss-carpeted spruce forests occupying the land. Hired after the construction of the rectilinear terraces, which were antithetical to his vision, Jensen mitigated the hard edges with sinuating paths connecting the elements of his design and the buildings. 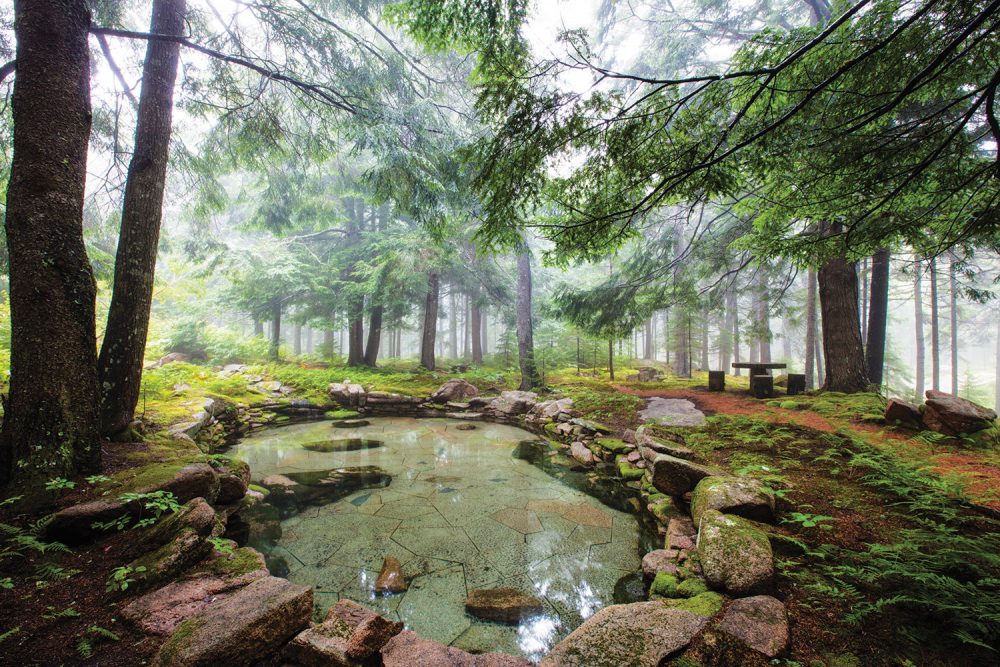 The Fords used Skylands as a summer retreat for the next 51 years, until the death of Eleanor in 1976; it was sold by her children in 1980. Gratifyingly, the historically significant property was sold to its third and current owner in 1997, Martha Stewart, American mistress of the domestic arts. Few people would have approached ownership of the property as sensitively and seriously as she has. “I look at myself as the caretaker of an American treasure,” she says.

Though upon possession Stewart found Skylands a veritable time capsule—cabinets brimming with the Ford family’s original plates and vases, laundering machines still operable, artfully crafted fire-starters stored near each hearth—the gardens had matured to an extent that the original intent had been lost. In addition, the council ring (Jensen’s term for a stone seating circle), a signature piece inherent to most Jensen landscapes, had never been built. 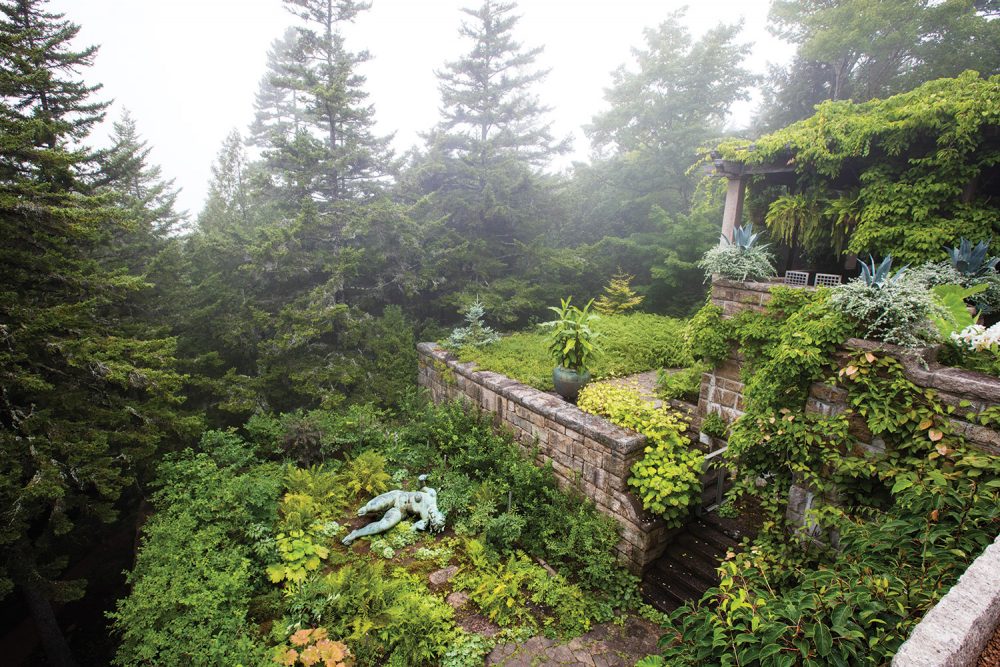 Aristide Maillol’s statue La Rivière looks up to a Seal Harbor sky from a rich assem­blage of ground covers on a landing below the main terrace. Apparent are the massive, handsome retaining walls, made of the same stone used for the residence.

With the help of luminary American landscape architect Patrick Chassé, the surrounding spruce forests were opened and brought back into scale. On a lower terrace, Aristide Maillol’s Le Rivière, a bronze nude in rapturous repose, was installed on a carpet of moss, providing the sense of a garden at once in motion and with deference to its history. 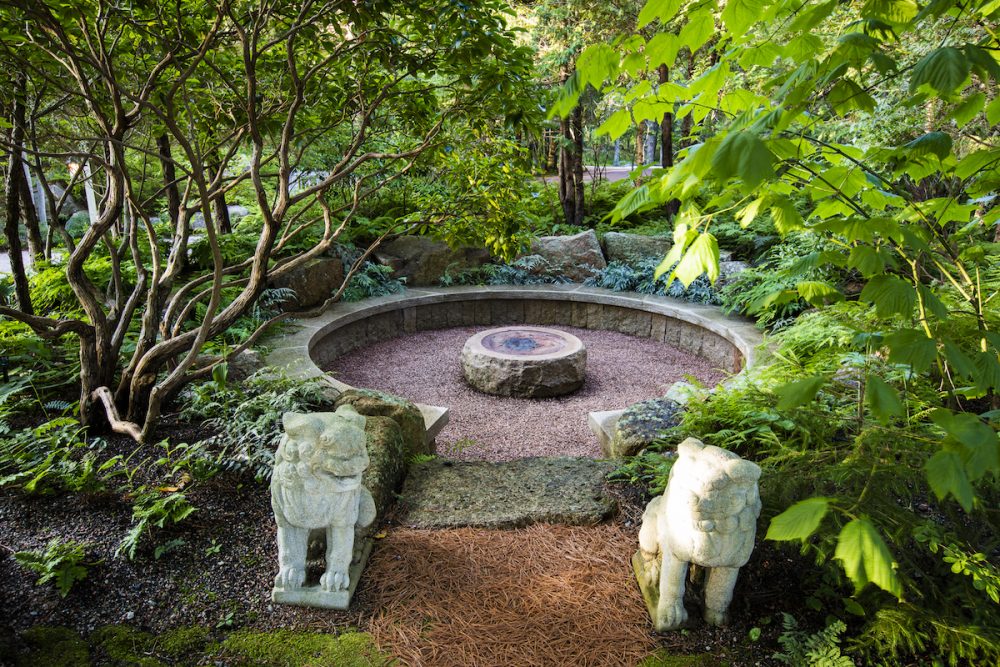 The entrance to the council ring, designed by Jens Jensen and implemented with a modern clarity by Patrick Chassé, is flanked by carved granite lions from China.

Interestingly, the reason the Fords never executed the council ring was its proximity to the end of the house associated with the servants. Herein lies the difference between the original owners’ sense of propriety and the current owner’s approach to living. Less formal dinner parties are often staged on the small porch overlooking the converted ‘laundry yard,’ beyond which can be seen the entrance to the council ring, the completion of Jensen’s vision for the property. 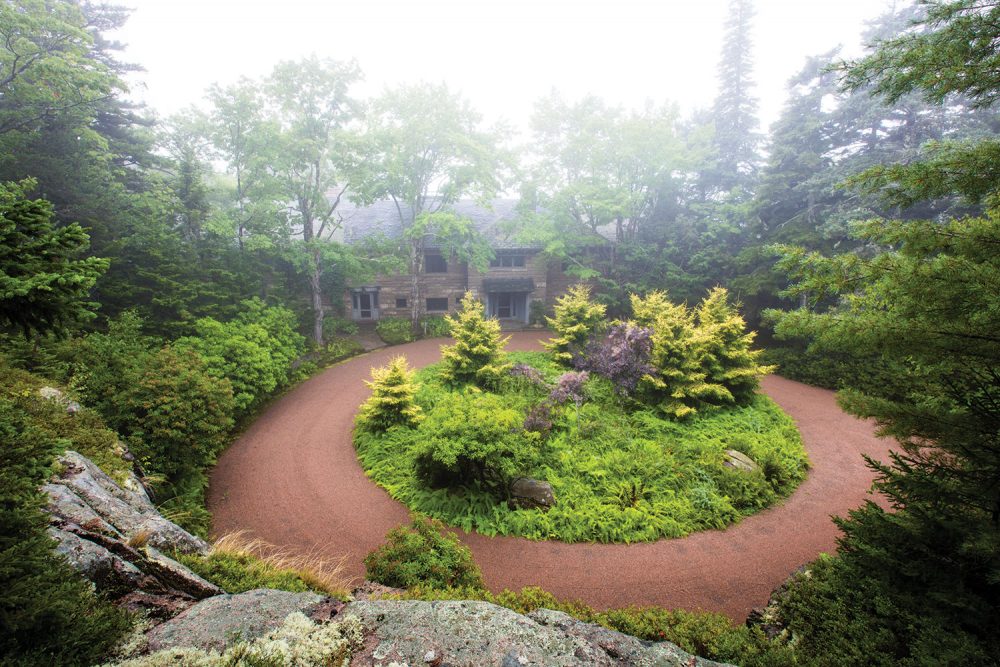 Yet many of the details of the garden, indeed many of the most memorable aspects, represent Stewart’s own hand in polishing this treasure. Pine needles brought to the garden—pines are not indigenous to the site—are scattered on the intimately scaled and curving paths to create a tranquil passage as one strolls the estate. The cutting garden, the only formal, rectilinear space that Jensen allowed, is devoted equally to Stewart’s favorite dahlias and lilies and her vegetable crops, especially those that are at their best during her late summer stays. Stately rows of artichokes might seem incongruous to the coniferous forests of Maine, but their legitimacy is not questioned by guests as they savor them freshly plucked and perfectly prepared, presented in yet another legendary meal by the master herself.

The walls of the massive stone foundation and house were originally softened by the addition of hardy deciduous vines appropriate to a coastal Maine climate. Stewart has added two species of kiwi vine, as well as climbing hydrangea and American pipe vine, to further temper the stone edifice without diminishing the beauty of the granite. The effect not only secures the structures to the surrounding landforms but also evokes a sense of discovery and mystery, a temple consumed by jungle. 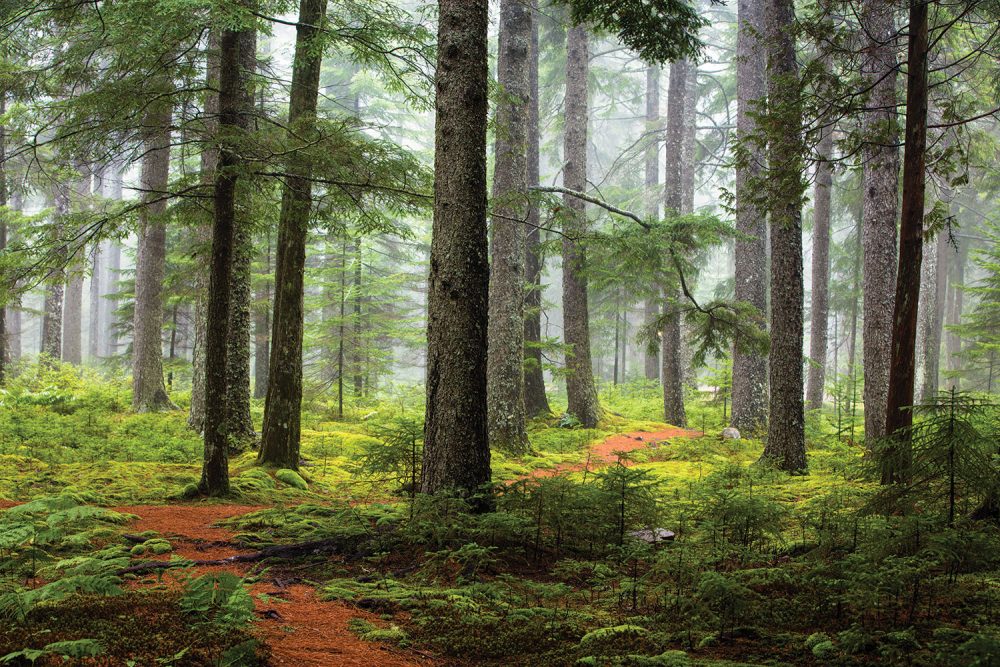 The air of Skylands is perfumed by 70 acres of fir and spruce forests that rise from moss- and lichen-covered rock outcroppings. Early morning ocean fog frequently cloaks the property, bringing stillness to the already peaceful setting.

Stewart resides here at her “favorite place” each August, creating weekends for her daughter and grandchildren as well as a large and disparate congregate of friends and colleagues. The houses become a rattle of activity, with early rising guests greeted by their host with a latte and the smell of freshly baking scones emerging from the oven, all to ready her gang—at least the brave of heart—for a dawn hike up Beehive Trail, one of the most brutal in adjoining Acadia National Park. 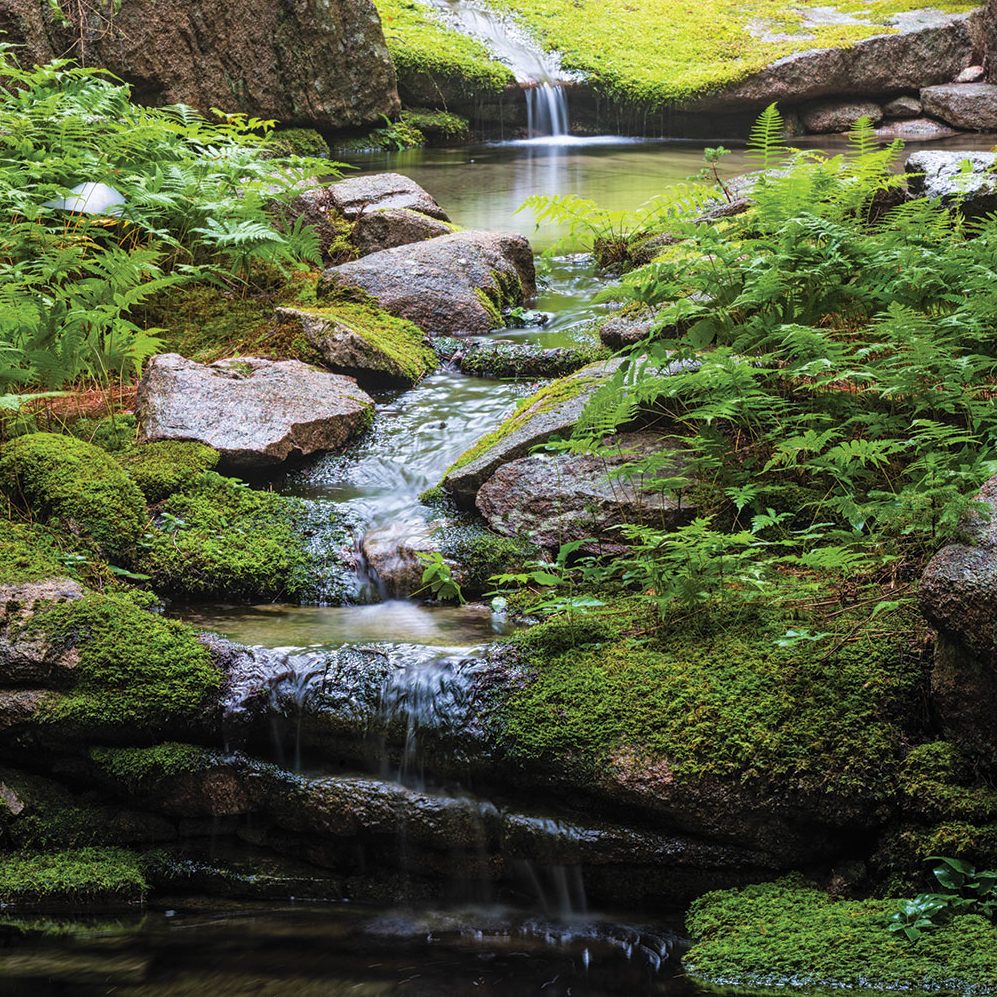 Ethereal pools and falls are set within natural rock formations and moss.

Those arising even earlier, with only the slightest promise of the sun’s first direct hit on North America, will invariably discover Stewart on the terrace with her dogs, sweeping, watering, and primping the containers of exotics she designed and planted, and staking the lilies that infuse the air with their perfume just in time for her birthday each year.

Then, one cannot help but pause and marvel at the beauty and precision of that moment, imagining the conversations spoken here for nearly a century while feeling grateful that this priceless piece of Americana is in such apt hands.

A granite “fern table” displays stones picked up during hikes on the Maine property.

A variegated cultivar of Agave desmettiana provides a sturdy presence to containers on the terrace.

Lichens growing on rocks and trees alike add color and texture to the landscape.

Lowbush blueberry (Vaccinium angustifolium) is prominent and fruitful throughout Skylands.

An ice plant, though not hardy, provides sensational blue foliage and an undemanding demeanor for containers.

Haircap moss (Polytrichum sp.) is only one of dozens of native moss species that thrive on the property. 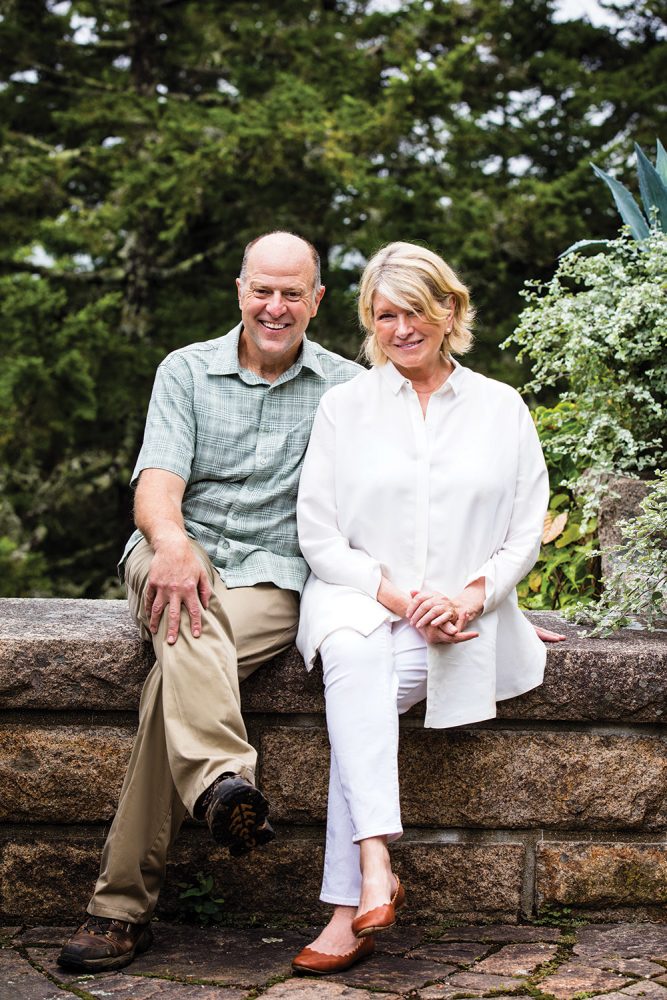 (Left)Stewart with writer Daniel Hinkley when he visited Skylands.

To see more of Claire Takacs’s photography, check out her new book, Dreamscapes: Inspiration and Beauty in Gardens Near and Far (Hardie Grant Books, 2018).