A Day in the Hamptons with Michael Grim

When Aerin Lauder, Style and Image Director of Estée Lauder and Creative Director of her new luxury lifestyle brand AERIN, heads out to her house in the Hamptons each weekend in the summer, she knows a delightful surprise awaits her. That’s because earlier that day, florist Michael Grim pulled his van, loaded with delphinium, hydrangeas, and garden roses, into her driveway, and set about fashioning arrangements of her favorite flowers to adorn her entry, living room, dining room, and bedrooms. “Michael has an amazing eye. He loves flowers, tabletop, and entertaining. He is incredibly talented and an important part of my Hamptons life,” Aerin says.

The floral designer will be familiar to viewers of Ina Garten’s Food Network show Barefoot Contessa as the friend she pulls into craft centerpieces for her feasts. “It was a simple decision to put him on the show,” Ina says. “He’s so good on TV, and he’s fun!” Michael concurs: “We both love to giggle,” he says.

The two became friends nearly two decades ago when Ina started frequenting his shop, The Bridgehampton Florist. “I like it that his flowers are simple, beautiful, and elegant,” she says. “They’re appropriate for the country setting. There’s nothing precious about them. Our styles are very similar.” They’ve since gone on to become favorites of the tony set who flock to the Hamptons during the summer, Ina with her delectable food and Michael with his floral arrangements done on-site in clients’ homes.

Try to catch him on a Thursday or Friday morning in the summer and Michael will likely be on the move, driving his Suburban back and forth between his shop and houses up and down the beachside community. He buys the freshest flowers available and subjects them to as little time in transit as possible, which means he returns to the shop between each visit to load up the next client’s flowers. Remarkably, he doesn’t spend a lot of time in consultation with his clients. “Over the years, I’ve come to know what they want,” he says. “Some want only white flowers, some want masses of a single flower in an arrangement, and most of them want it to look like they went to the garden and picked the flowers.”

A trip to the garden, incidentally, launched Michael’s career as a floral designer. As a child, he would visit his grandmother’s country house in Vermont in the summer. “I think it was probably to get me out of the house,” he says, “but she would send me out into the garden to cut flowers and make arrangements to put in the bedrooms for arriving guests.”

A Floral Day in the Life of Michael Grim 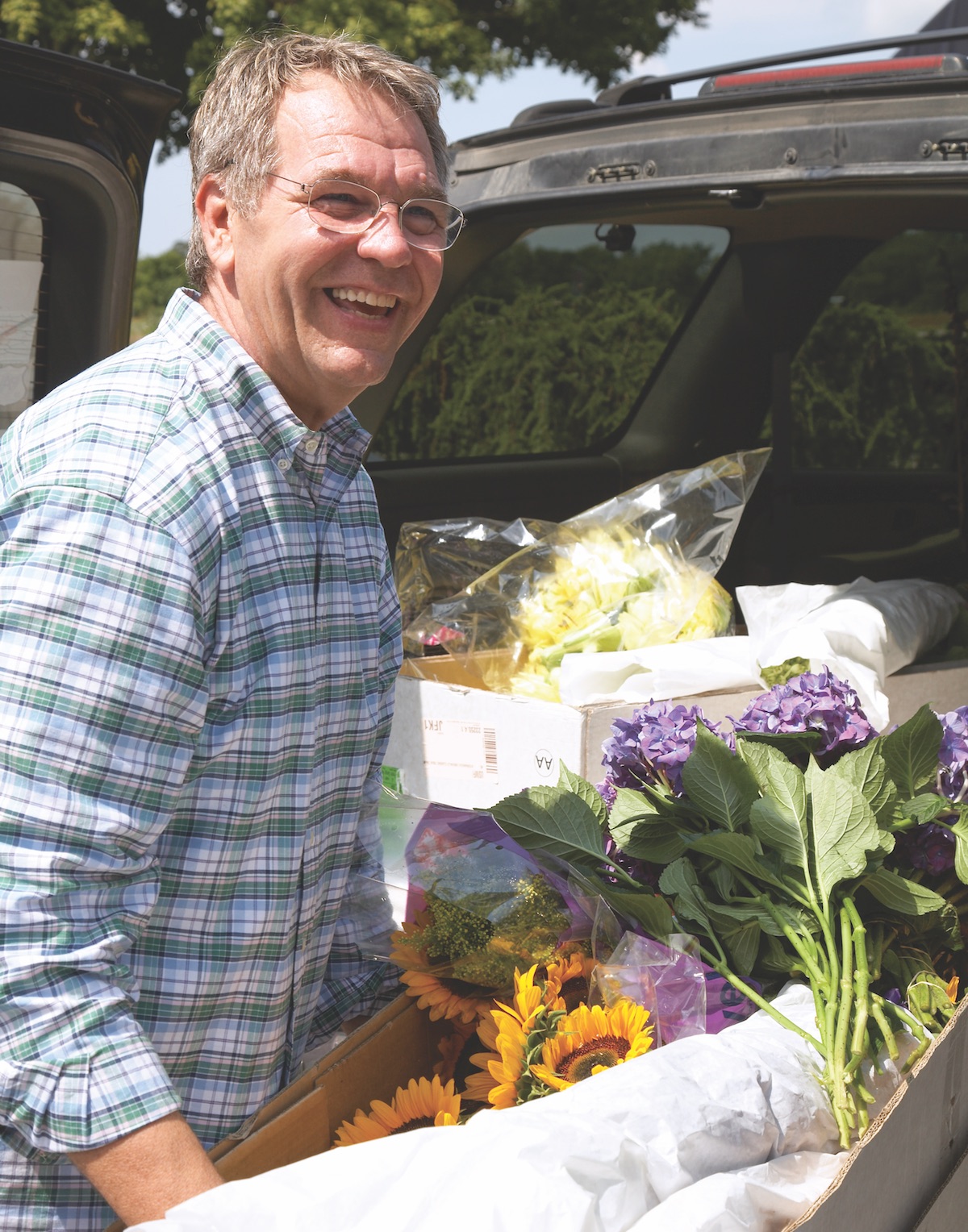 7:00 a.m. Michael loads his vehicle at The Bridgehampton Florist. 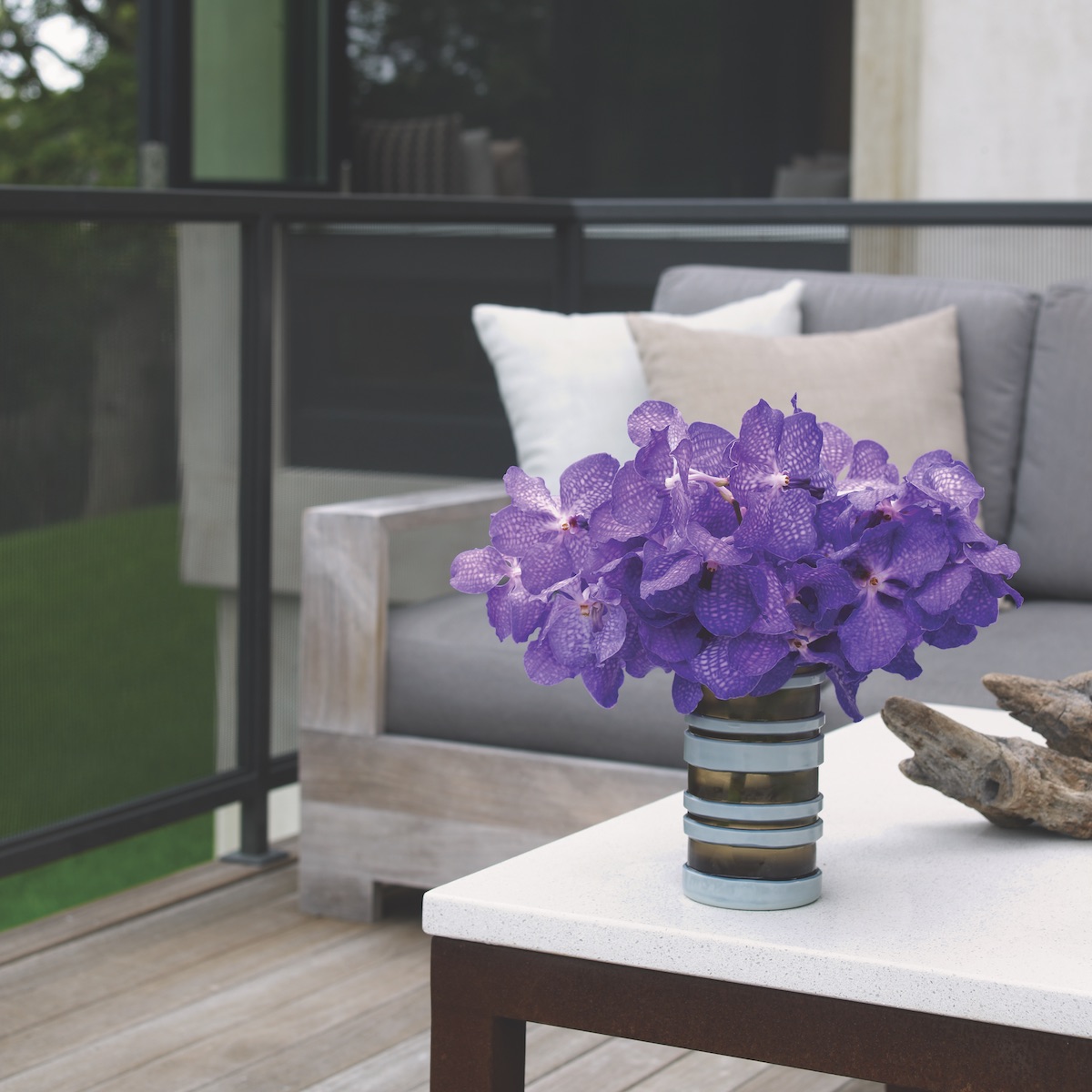 7:30 a.m. Michael flowers a home in Sag Harbor. “The outdoor surroundings are such a part of this house that you don’t want arrangements to compete with the view,” says Michael. “So we just massed a few blooms for pops of color.” Here, he uses vanda orchids to enliven the porch. 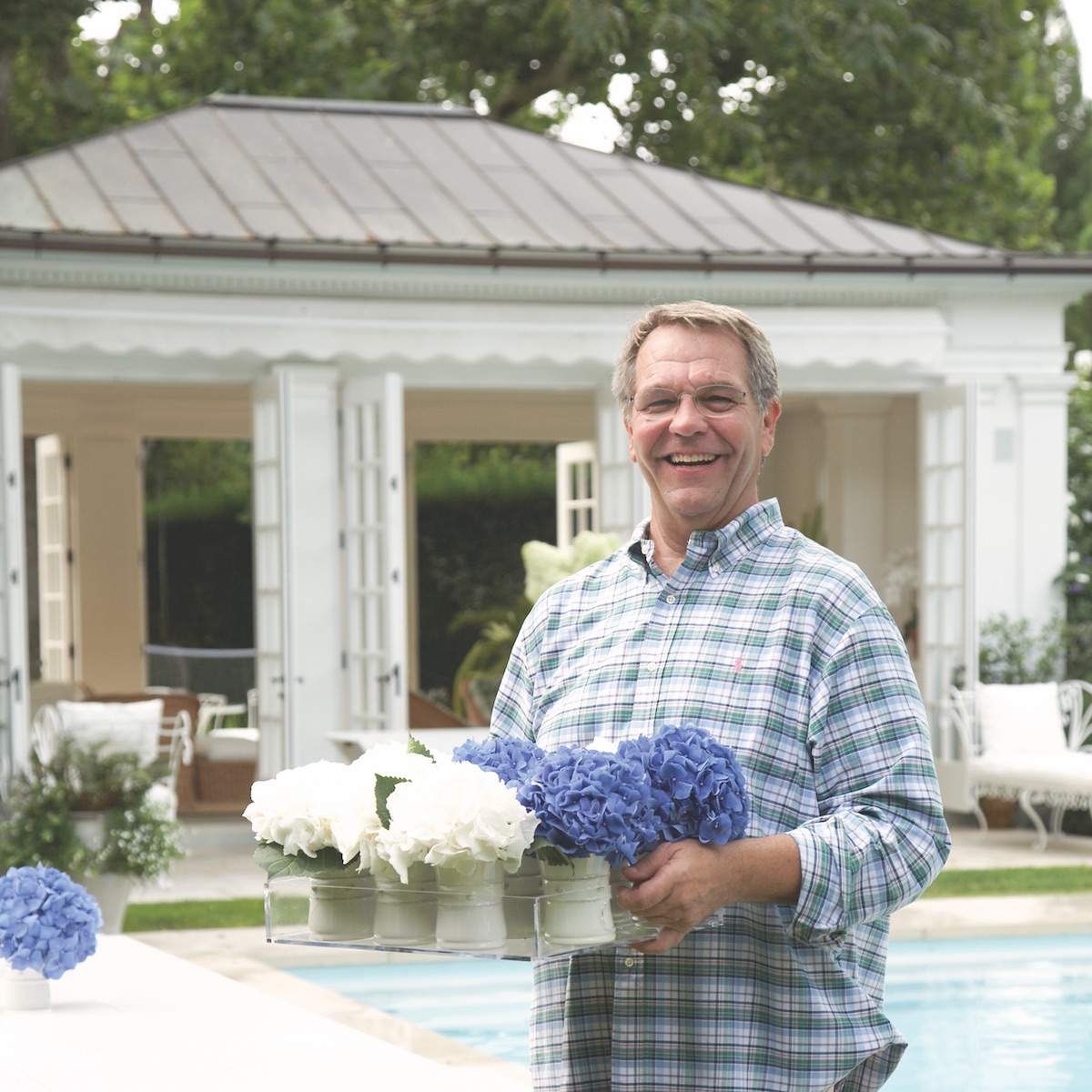 9:45 a.m. After doing some work at the shop, Michael goes to Aerin Lauder’s home in Wainscott to create arrangements inside and also by the pool for Aerin’s 10-year-old son’s swimming party. 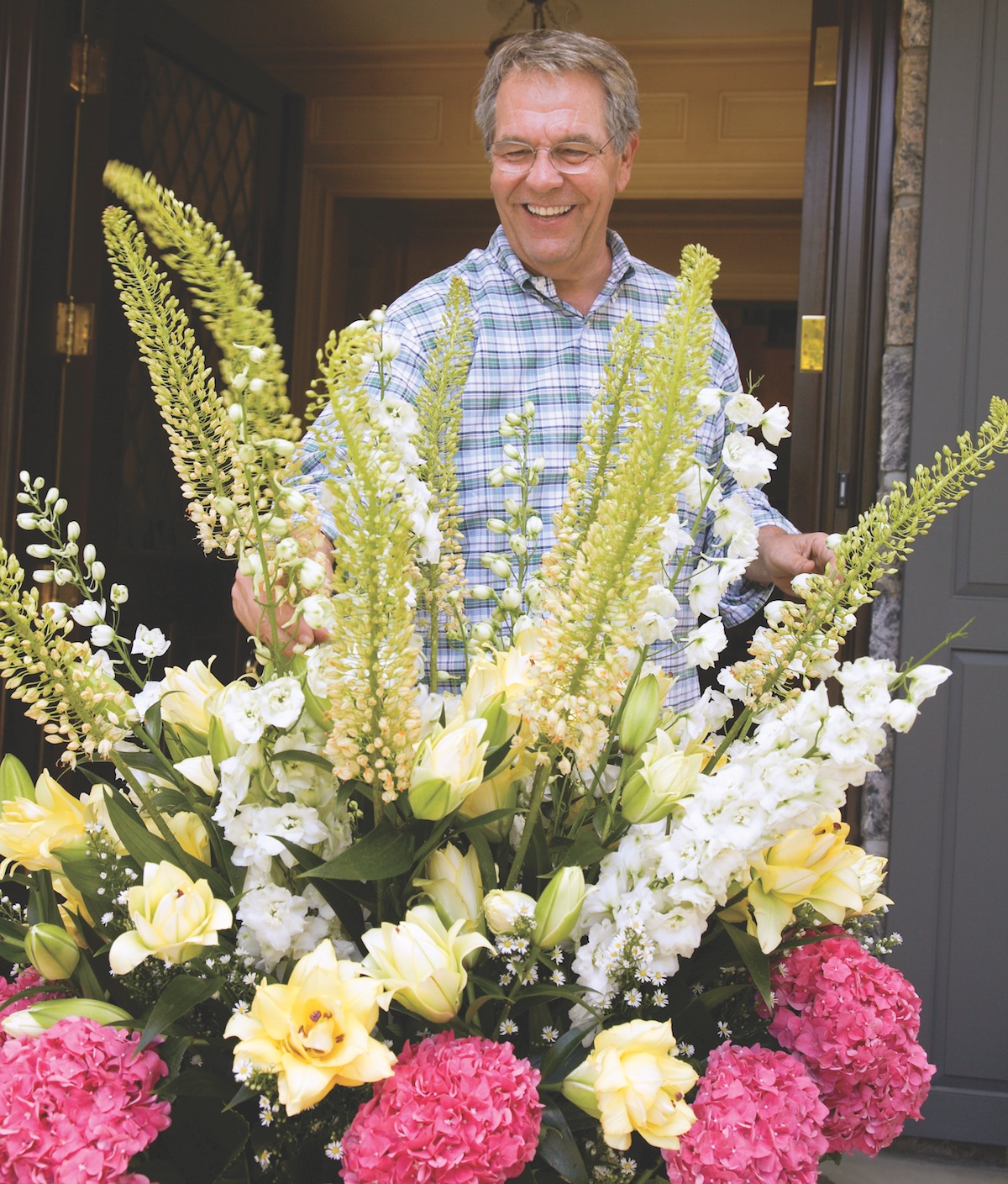 12:30 p.m. After coming back to the shop for a flower refill, Michael heads to the home of Lisa and Chris Jefries in Southampton to create a massive arrangement for their foyer table. 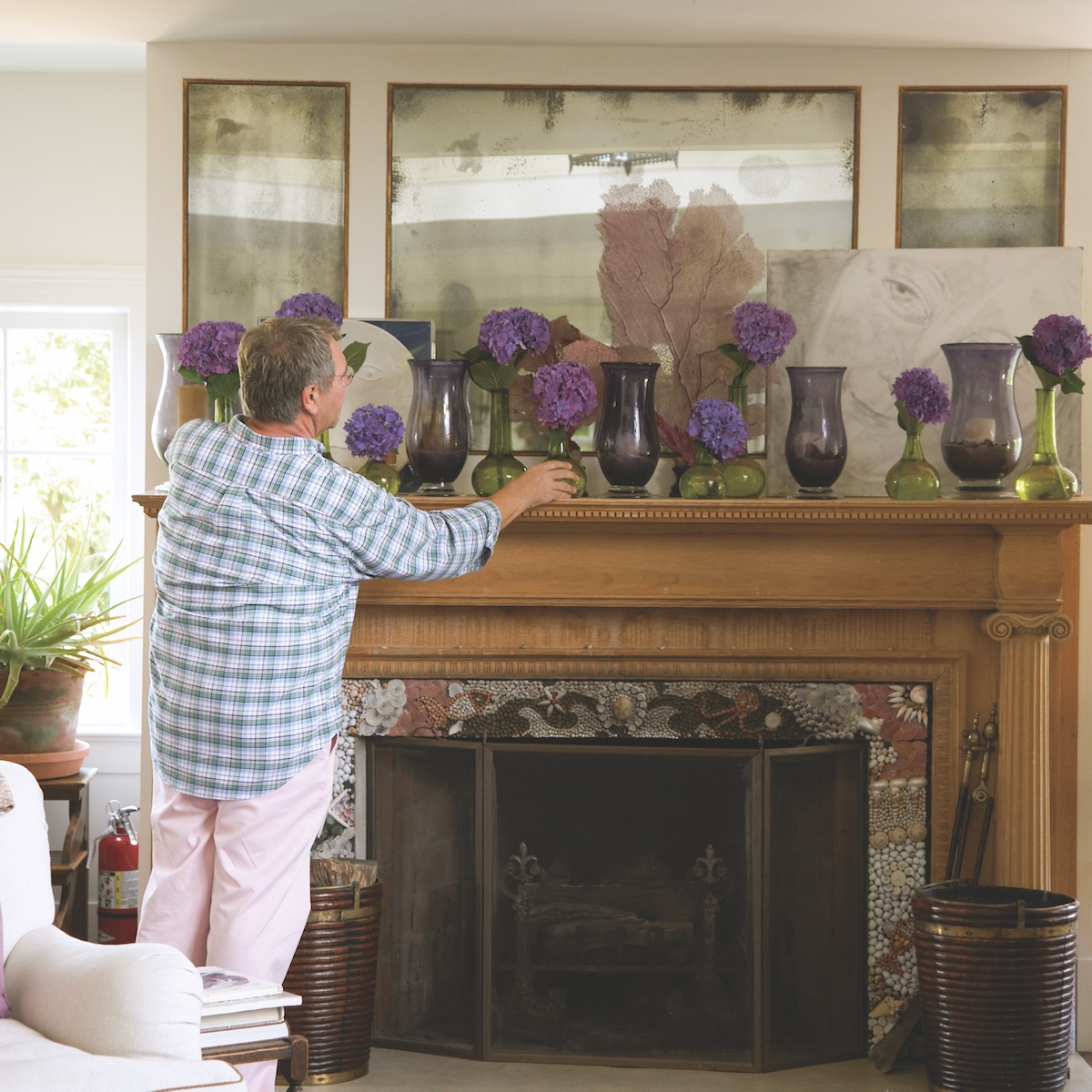 12:45 p.m. Still in Southampton, Michael flowers the final location of the day, a house once owned by Gloria Vanderbilt. 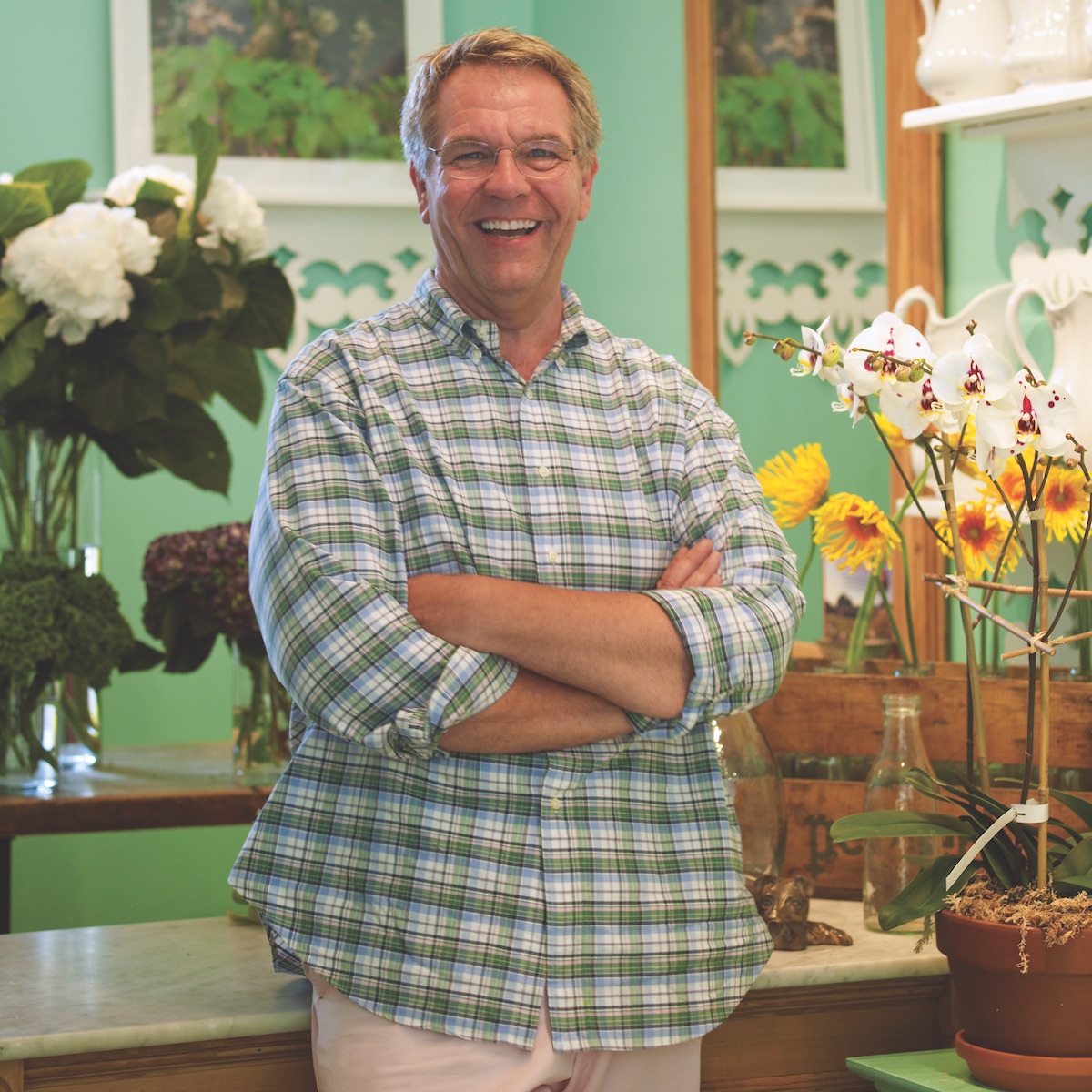 1:45 p.m. Michael goes back to The Bridgehampton Florist to serve customers for the remainder of the afternoon.

That early exposure led him to enroll in a vocational course in his small Pennsylvania hometown where he studied greenhouse growing and floral design. He flourished in the program and was asked to participate in a floral trade show along with six professional floral designers. “I did great,” he recalls, “and was told that if I wanted a career in flowers that I needed to move to a bigger city, which I did. New York City!” There he established himself as a floral designer and built a loyal base of clients. “In 1981, I spent the summer in the Hamptons,” he says, “and I never went back.” Luckily, Michael’s devoted clientele were thrilled to have his services available for their Hamptons getaways and ensured a successful transition.

One summer Thursday, Michael and his assistant Jackie Dacuk began the day by loading flowers into his Suburban before driving to a Sag Harbor home. Strong, clean lines predominate the space, and large windows allow the surrounding trees to become part of the interior. So Michael opted to restrict his floral arrangements to simple pops of color in bunches of orchids and stems of alliums. From there, it was back to the shop to reload for Aerin Lauder’s house in Wainscott. Michael and Jackie spent the next couple of hours decorating tables around the pool for her 10-year-old son’s swimming party. Blue hydrangeas in low vases interspersed with toy dinosaurs gave the tables a punchy, playful look. A large part of Michael’s business is creating floral displays for parties and events. But often, he just creates arrangements for his clients’ personal enjoyment.

After a trip to the shop for reloading, Michael and Jackie were off to Southampton, where they created an arrangement of eremurus, lilies, and delphinium encircled with pink hydrangeas for the large entry hall of clients Lisa and Chris Jeffries. Then it was on to the next stop, a chic house once owned by Gloria Vanderbilt, where her son Anderson Cooper spent much of his childhood. On the carved-wood mantel inlaid with seashells in the living room, Michael marched a variety of green glass vases holding stems of deep-purple hydrangeas, echoing the violet hues of a sea fan and accent pillows.

Eschewing floral foam, he favors crossed stems in water. “Since we are in the country our flowers are loose and casual,” he says. “For the flowers we use, like hydrangeas, water and lots of water is always best.” Filling the shop are his favorite summer flowers—hydrangeas, dahlias, zinnias, and garden roses. Or as he puts it, neatly summing up his floral philosophy, “whatever’s fresh and beautiful.” Michael is experimenting with vivid color combinations. “I love color,” he says, “like hot pink with orange. Currently I’m putting blue with a coral pink and pale lavender. It’s wonderful.”