A globe-trotting couple find each other, then find the perfect place to call home 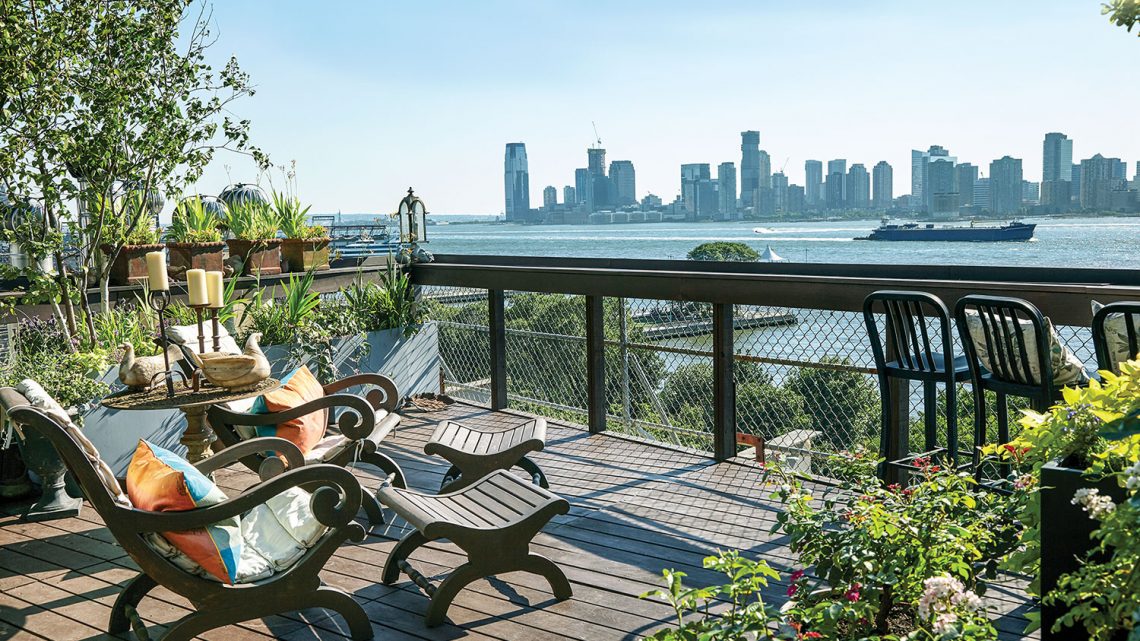 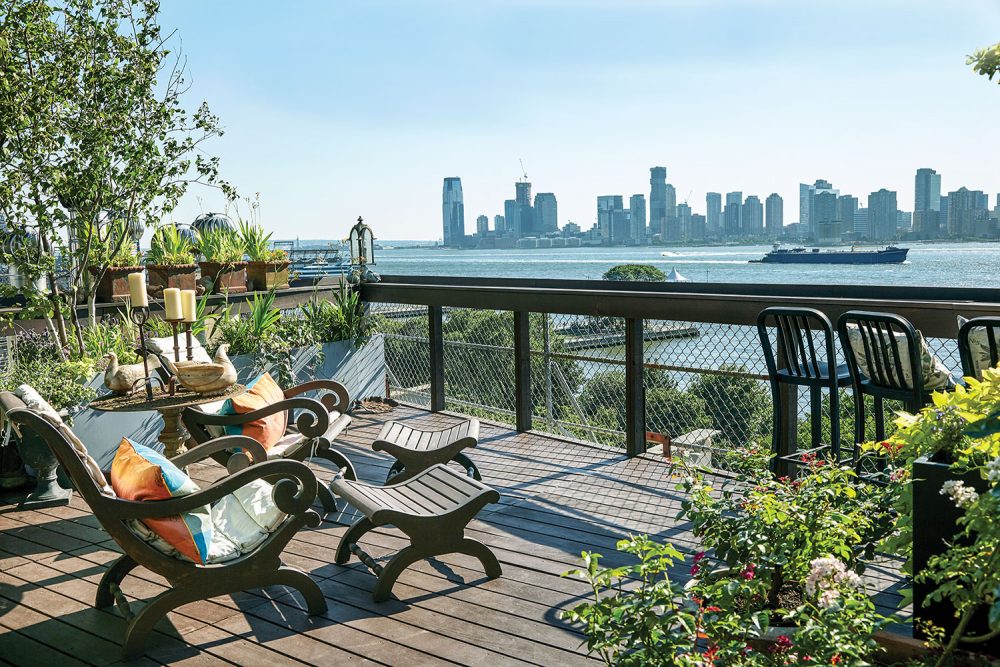 Years ago, if you’d told a young Fiona Tilley that in 2019 she would be a former Wall Street banker married to a Turkish jeweler and running the company that sells his designs, she might not have believed you. What she would have believed is that she would be the caretaker of a fabulous garden. For all her years as a world-traveling, hard-charging investment banker, gardening is a love that has never left her.

“My mother is an avid gardener and my father studied horticulture,” she says. In fact, her last name is derived from “tiller of the soil,” the result of an ancestor who migrated from England to Australia and established one of the country’s first public gardens there. 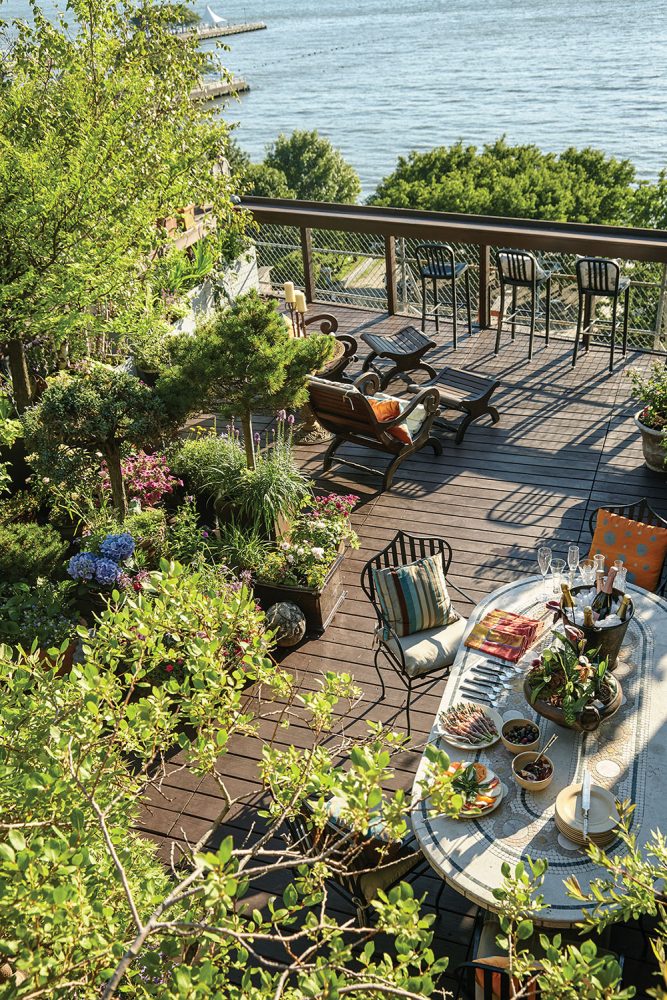 To make the most of her rooftop space, Tilley created separate areas for dining and lounging. 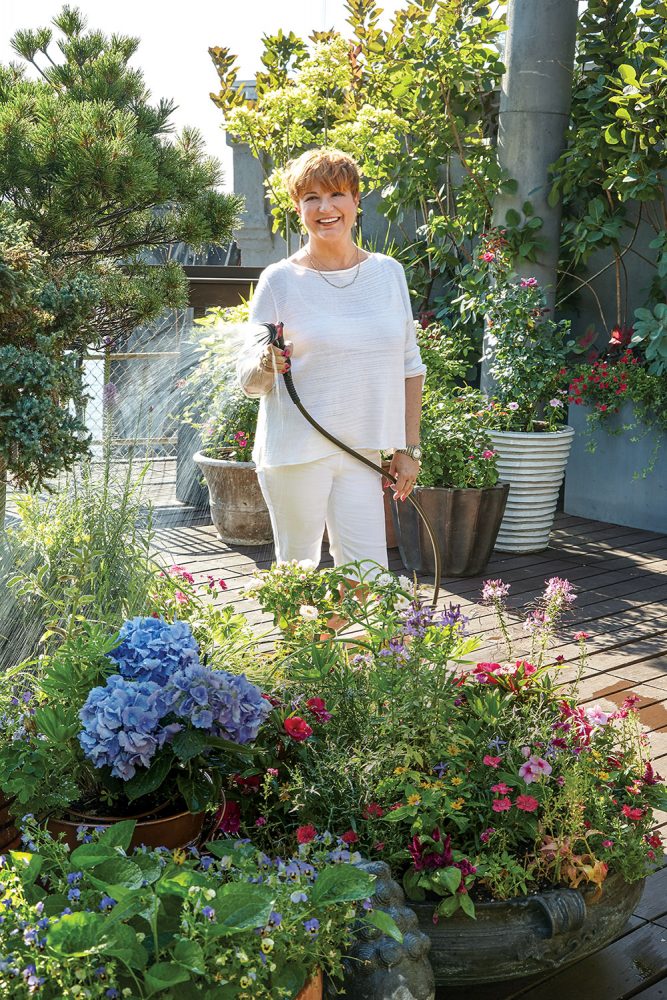 “Although I’m Australian, I’ve lived in the States for 33 years, so this is definitely home for me,” says Tilley, who moved to New York with J.P. Morgan after practicing law. Her husband, jewelry designer Gurhan, came to America 10 years later, and their courtship is as serendipitous as any romantic comedy.

“I met Gurhan in 1995, when I was still a banker,” says Tilley. “I was on vacation with a girlfriend in a small coastal town in Turkey. Truthfully, I fell in love with Turkey before I fell in love with the jewelry before I fell in love with the jeweler,” she laughs. She spent the entire day in Gurhan’s store. “Something about his pieces really spoke to me,” she says. She asked the clerk if she could meet the designer. “Can I look him up?” she asked. No was the answer. “‘He’s a cranky old man, and he doesn’t speak English,’ the clerk said to me,” remembers Tilley. But the pleasantly persistent redhead didn’t give up. 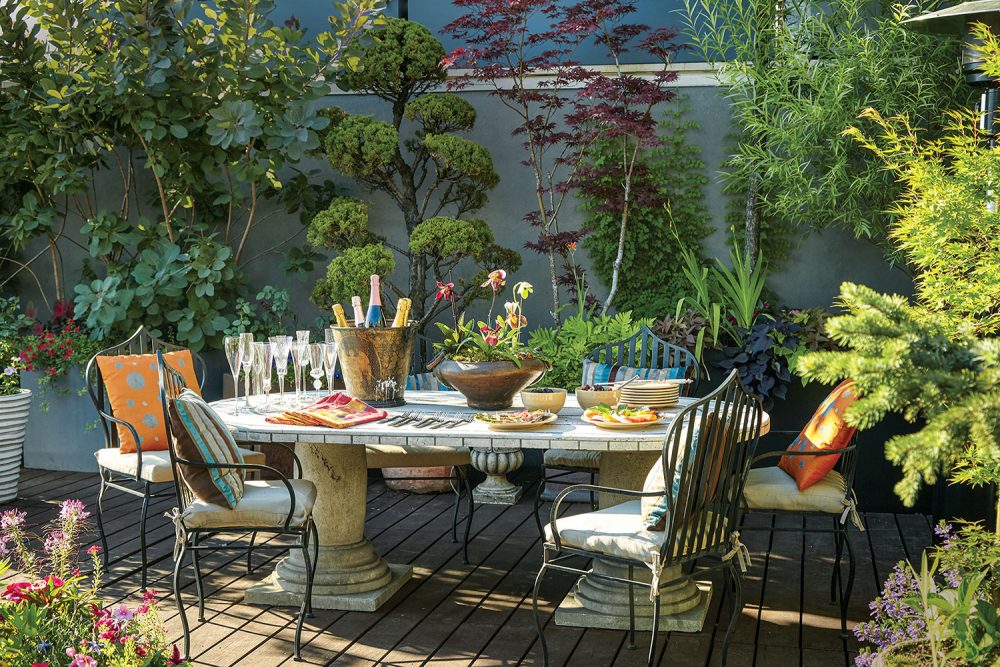 Behind the beautiful table, a row of trees creates a screen and masks the wall.

“A couple of weeks later I was in Istanbul, and I called on this supposed cranky old man. It was a rainy day, and I was there with my girlfriend. I remember two things. First of all, he spoke beautiful English. Second of all he wasn’t cranky. He was wonderfully welcoming and invited us to his home.”

For Tilley it was love at first sight, “even though I didn’t believe in love at first sight,” she says. The pair stayed in touch by telephone for 16 months until Gurhan moved to New York. They were engaged soon after and married in 1999, the year Tilley left banking to run the business operations for Gurhan.

In the wake of 9/11, when the couple set about looking for a new apartment, it had to meet three criteria: It had to be downtown (in a show of solidarity with the wounded part of their city), it had to have a view, and it had to have a garden. The West Village apartment they found had it all: a wonderful downtown feel, 360-degree views of the city, and an 1,800-square-foot roof perfect for a garden. 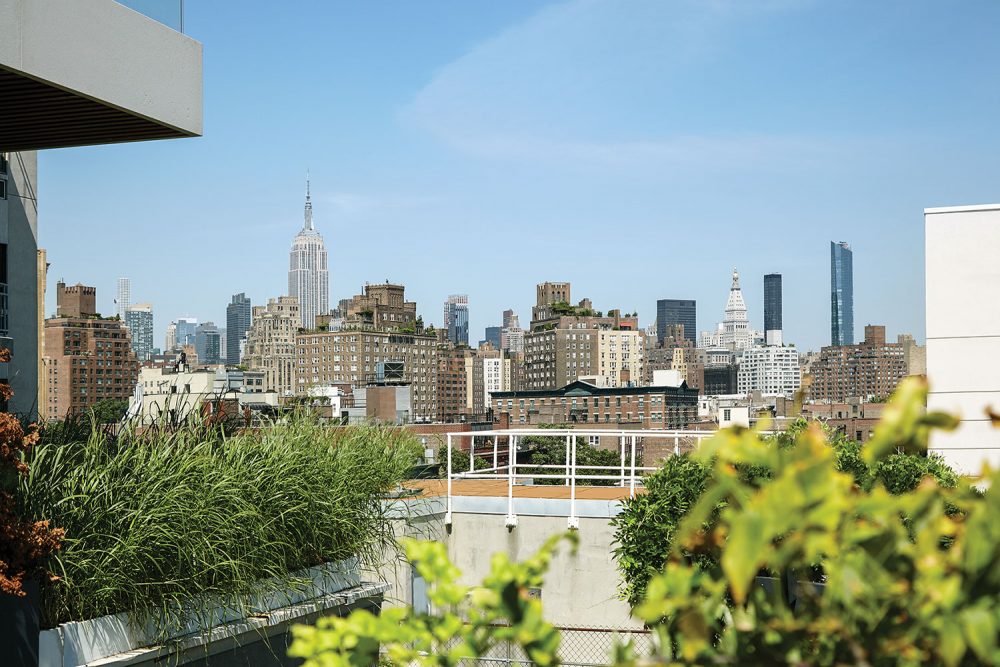 The view north looks toward midtown and the Empire State Building.

Though the couple both love the garden, it is unquestionably Tilley’s oeuvre. “I do all the work up there,” she says proudly. “I love to get my hands dirty.” The result of her work is an eclectic, bohemian, magical space so lush it’s hard to remember that everything is in containers. She loves trees and has an array of willows, column oaks, birches, mulberries, poplars, and maples. A trellis laden with wisteria, along with clusters of annuals and perennials, attracts the locals. “The birds love the trees, and the butterflies love the flowers,” says Tilley. 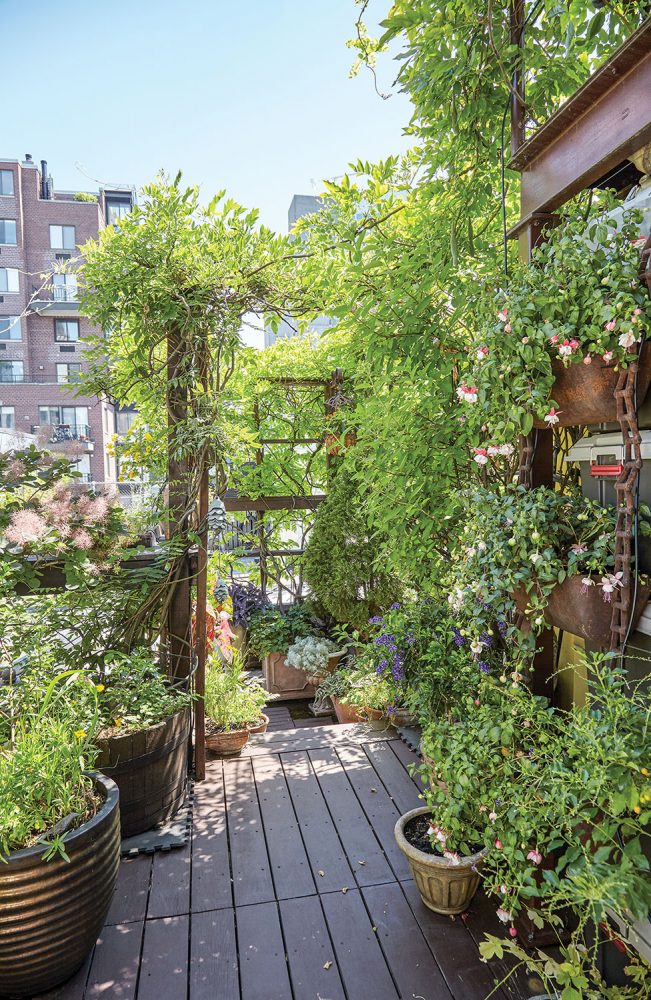 A trellis of wisteria invites birds to stay awhile. 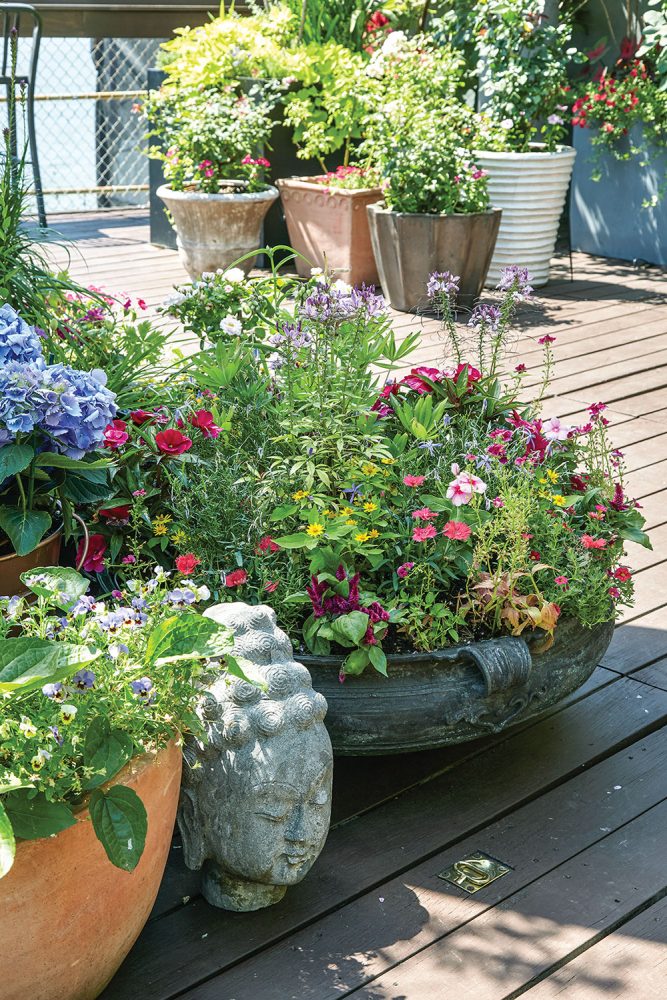 Objects from the couple’s frequent trips around the world fill the garden.

“I buy all my plants at the farmers markets. I don’t have a set plan when I go. I just buy what strikes my fancy.—Fiona Tilley 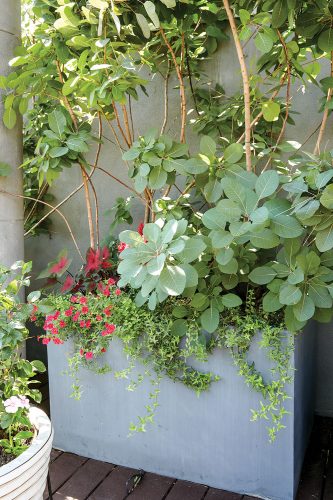 Inspired by the wildness of English gardens, Tilley’s containers are a mix of plants that evoke a casual, vibrant feel. 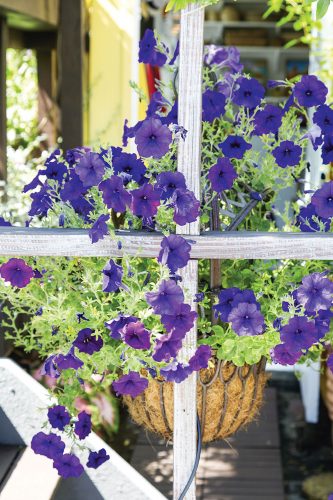 “I love blues and yellows,” says Tilley, who enjoys pops of color, such as this basket of petunias.

She appreciates the order and restraint of other gardens but isn’t drawn to that style. “I love the craziness of the English garden. I love mixing the colors,” she says. “I’m constantly trying new things and changing it up.

“Gurhan is always saying to me, ‘You don’t have to redecorate the roof!’” she says. But, for a woman whose life has been so rewarded by being open to possibility, how can she resist? 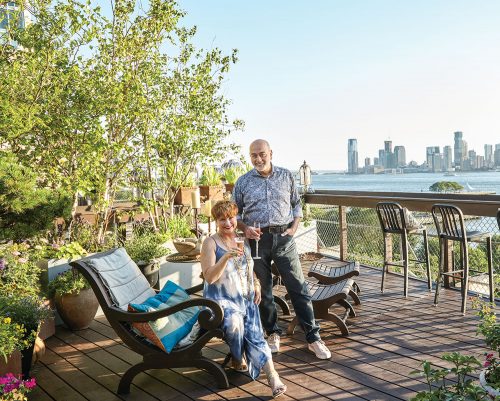 Tilley and Gurhan enjoying time in their favorite spot 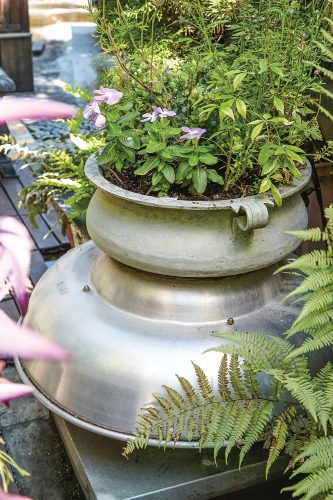 A pot of greenery camouflages an industrial element on Tilley and Gurhan’s roof.