When Lorie and Gavin Duke purchased this 1920s house in Nashville, they drew upon Gavin’s expertise in landscape architecture and Lorie’s flair for decorating to create a family-friendly home that blurs the boundaries between indoors and out 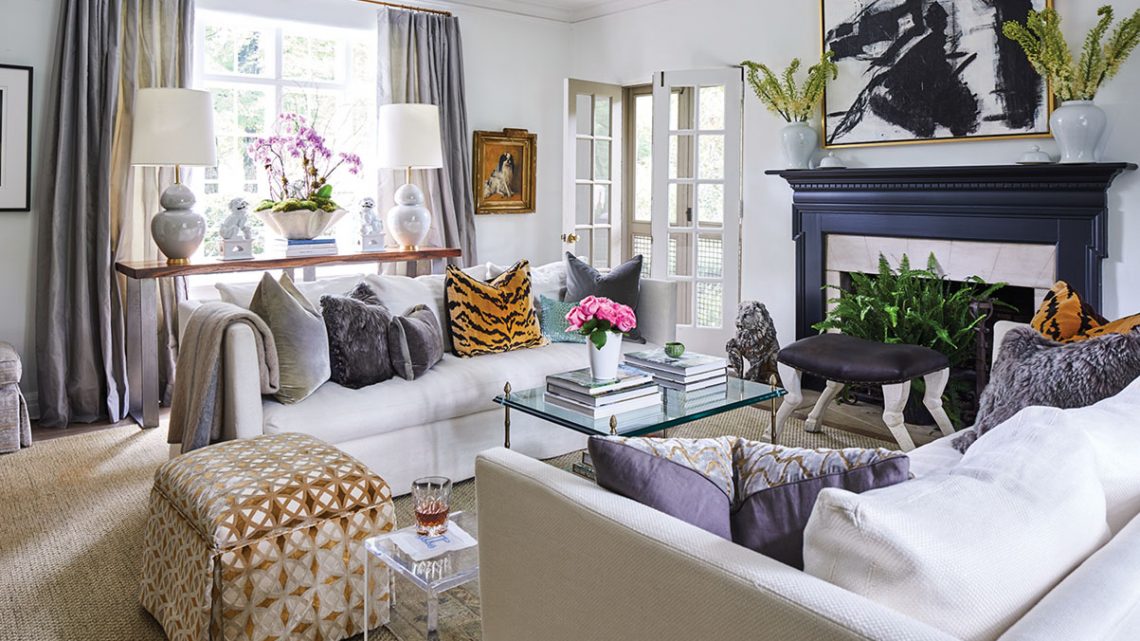 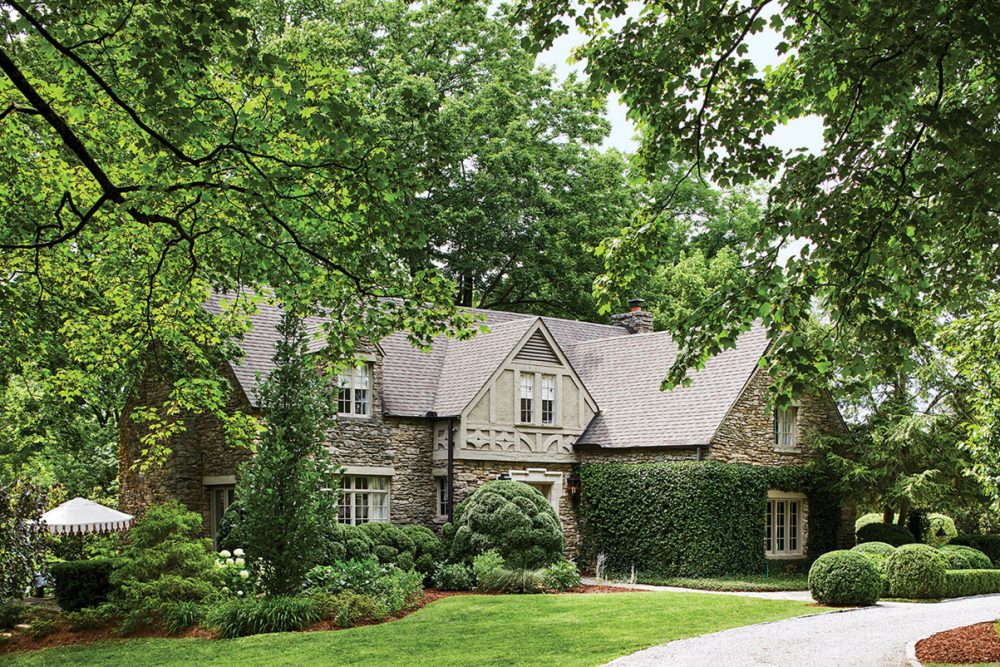 Not long after a story on Lorie and Gavin Duke’s former Nashville home appeared on a lifestyle website, they received a note in their mailbox with the proverbial offer they couldn’t refuse. With no plan in place for their next move, serendipity stepped in when days later they attended a charity event and struck up a conversation with a couple they’d met for the first time at the dinner table. “We mentioned that we were about to be temporarily homeless,” remembers Gavin, “and they replied they might have the perfect house for us—theirs.” The new acquaintances invited the Dukes over for a tour and a glass of wine, and as they wandered through the rooms and yard, Gavin and Lorie saw the potential to make it the right fit for their family. Soon they tendered an offer of their own. 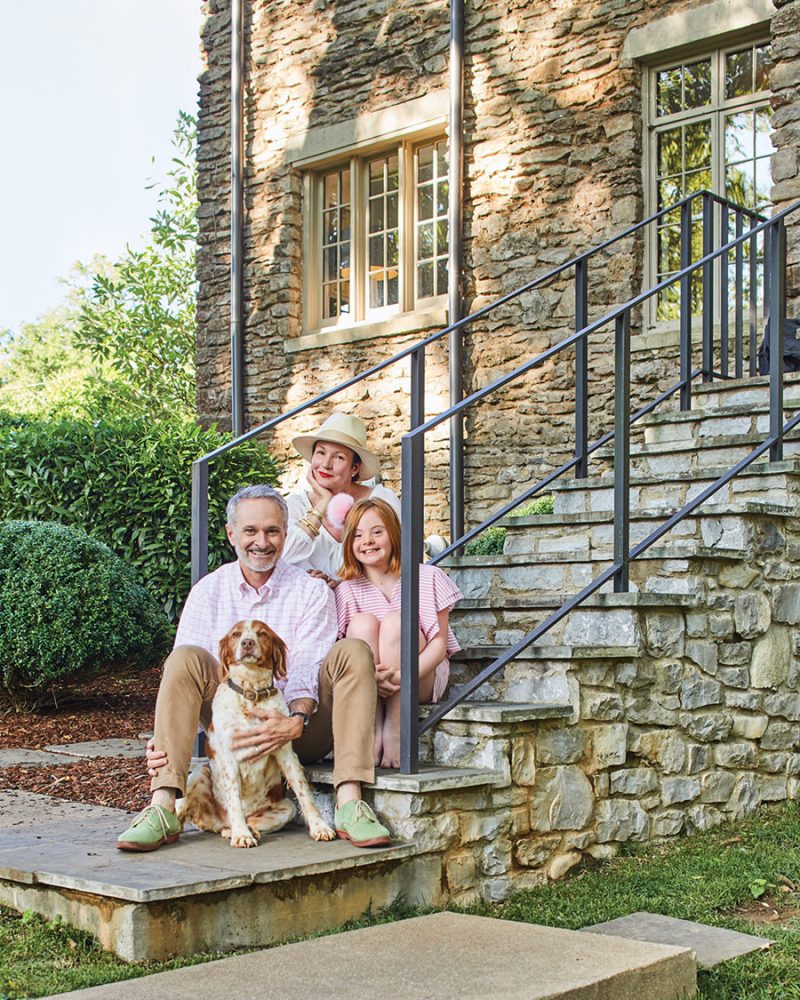 Gavin, Lorie, Poppy, and Gabe, one of the family’s two Brittany spaniels. 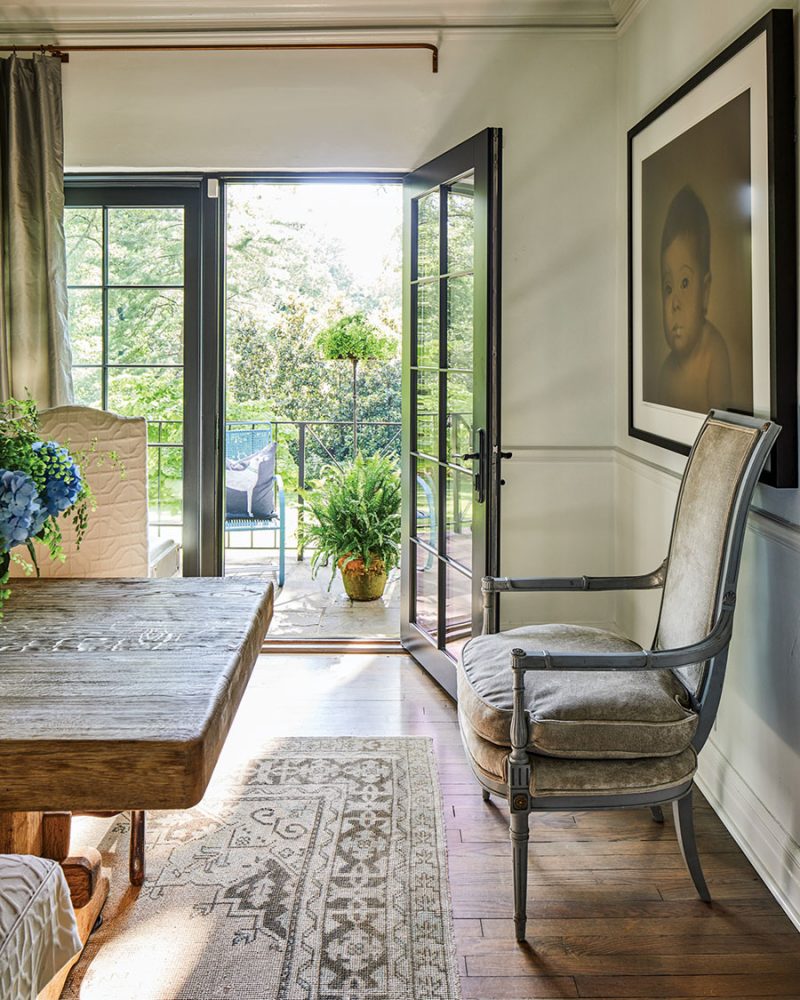 The interior and garden both speak of a love for texture and light, accented with bursts of color.

The 1925 Cotswolds-style house nestles on a one-and-a-half-acre lot in the neighborhood of Belle Meade, a leafy haven of stately houses with expansive green lawns and impeccably manicured gardens. Some of those gardens happen to be designed by Gavin himself, who as a partner in Page|Duke Landscape Architects, shapes the land for clients not only a stone’s throw from his own backyard, but also all across the South. Whether working on a landscape design for a contemporary house or a historic one, he roots his approach in classicism, always adapting for the built environment and maintaining that the garden should reflect what’s going on with both the architecture and the interiors. 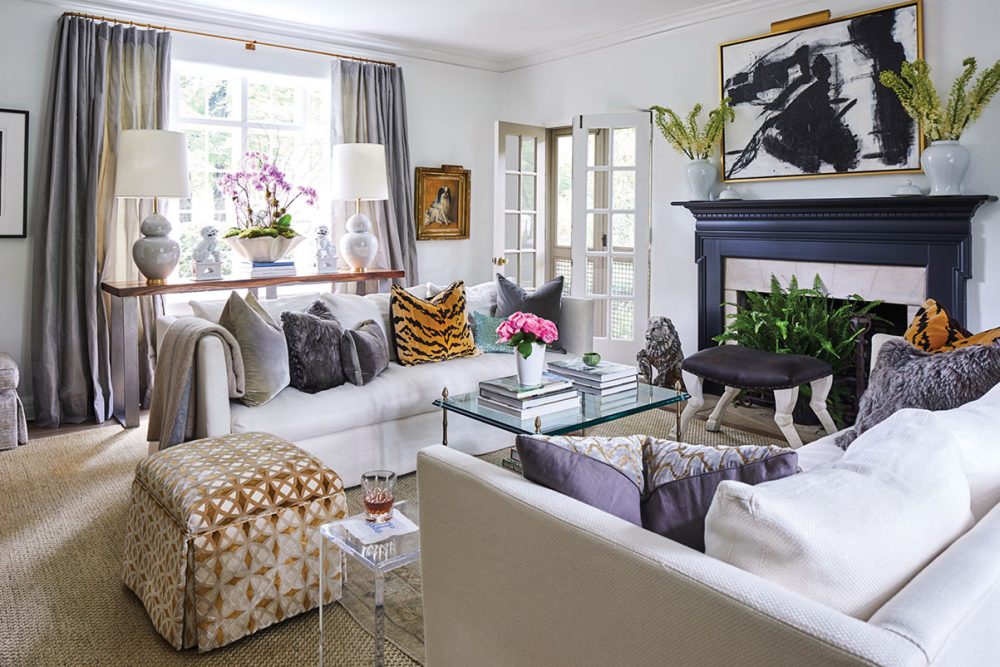 “I have an addiction to pillows and love a mix of silks, mohairs, and velvets,” says Lorie Duke. When she found a pair in Scalamandré’s Tigre fabric, she vowed to build the living room around them. A pair of LEE Industries sofas flank the fireplace. The painting above the mantel was a house-warming present. (See a list of sources for this home.)

“Gavin and I have an agreement—he obviously drives what happens outside, and I take the lead on the inside,” says Lorie. Although not a designer by trade, she works in sales and marketing at G & G Interiors and frequently chairs stylish affairs for philanthropic organizations, such as the Antiques & Garden Show preview party and the Nashville Symphony fashion show. Describing her look as classic with a modern twist, she cites influences that include Slim Aarons, Audrey Hepburn, and Jackie Kennedy, along with a “love for anything from the ’60s and ’70s.” 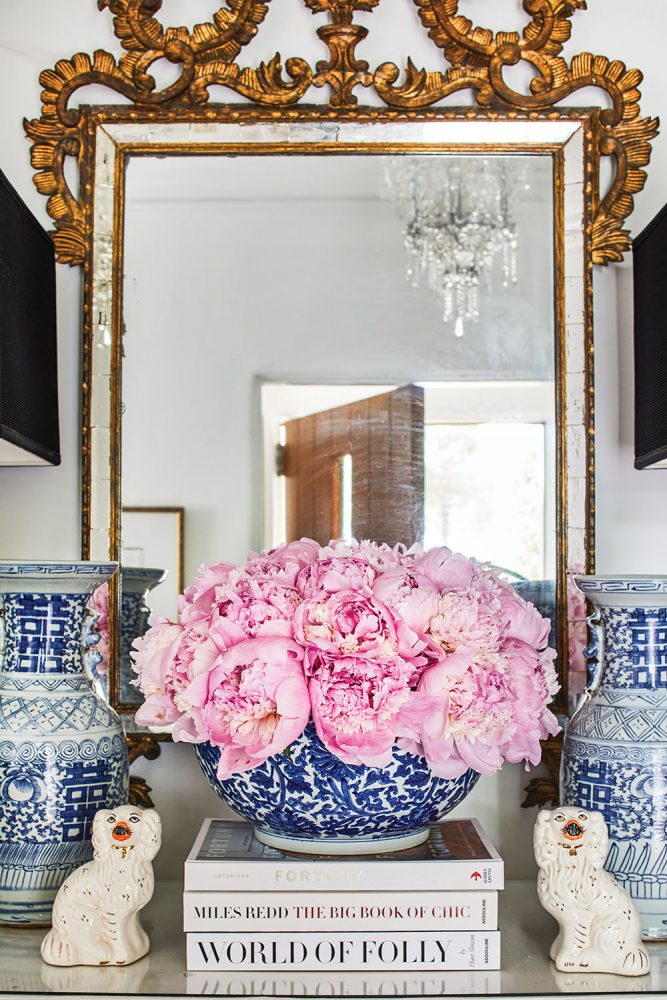 Whether clipped from their cutting garden or procured from friends at The Tulip Tree in Nashville (as the ones in this story were), “I always have to have fresh flowers in the house,” says Lorie. “They instantly make me happy.” 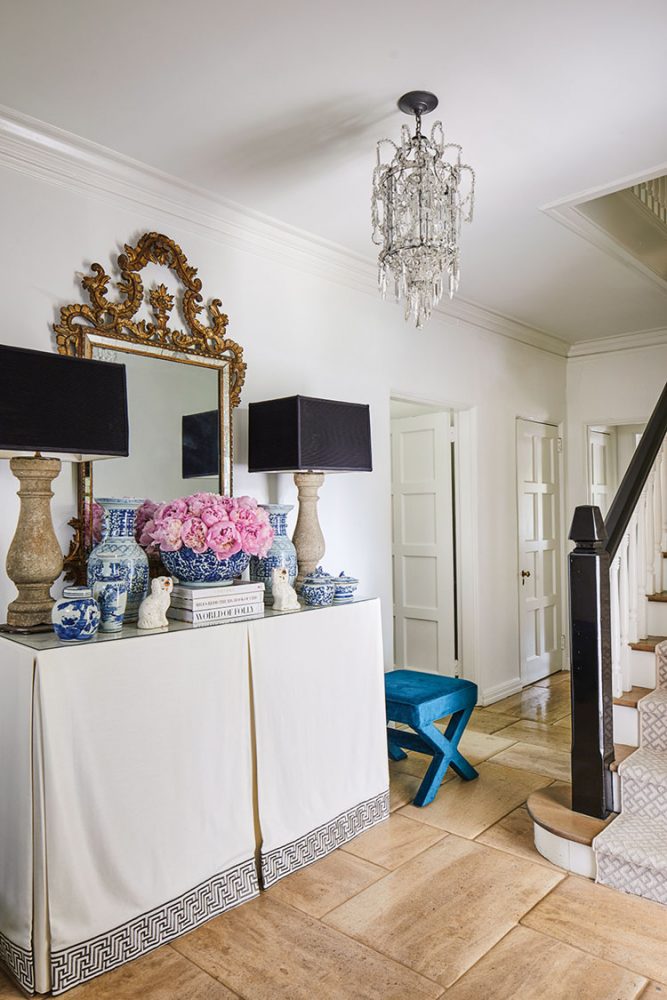 In the entry, on a skirted table featuring Schumacher fabric and trim, peonies fill a bowl from the couple’s collection of blue-and-white porcelain.

Fortunately for this couple, who often finish each other’s sentences even when they sometimes playfully disagree, their aesthetic partnership works as well as their personal one, resulting in a seamless blend of indoors and out. “The house has patina, with edges that have been knocked off over time. It feels comfortable, as if you’re going to somebody’s grandmother’s house,” says Gavin.

“Oh no, it’s far from grandmother’s house,” Lorie counters, with a laugh. “But houses with great bones like this one embrace you in a way that new construction can rarely do.” Just as Gavin layers the garden with flowering plants against an architectural structure of evergreen hedges and a collection of mature boxwoods, Lorie uses a mostly light and airy backdrop for a medley of textures with accents of color and pattern. Pieces that she has had custom made mingle alongside contemporary finds and antiques both inherited and collected. 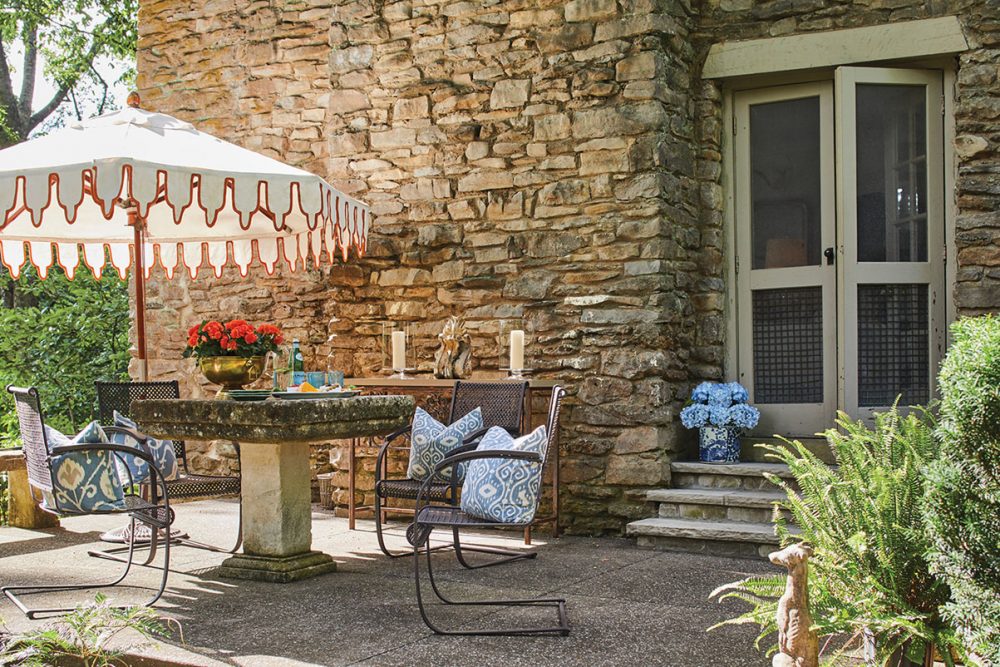 Gavin acknowledges that the house and its garden often serve, in essence, as a living billboard for his professional work. “A plain white box with a couple of boxwoods in front wouldn’t sell or tell as much about our firm as a house with character and a landscape that speaks the same language,” he says.

Lorie adds, “What we love most of all is when our friends say our house wins the comfort award and that it’s elegant and relaxed at the same time. That means we’ve achieved what we set out do.” 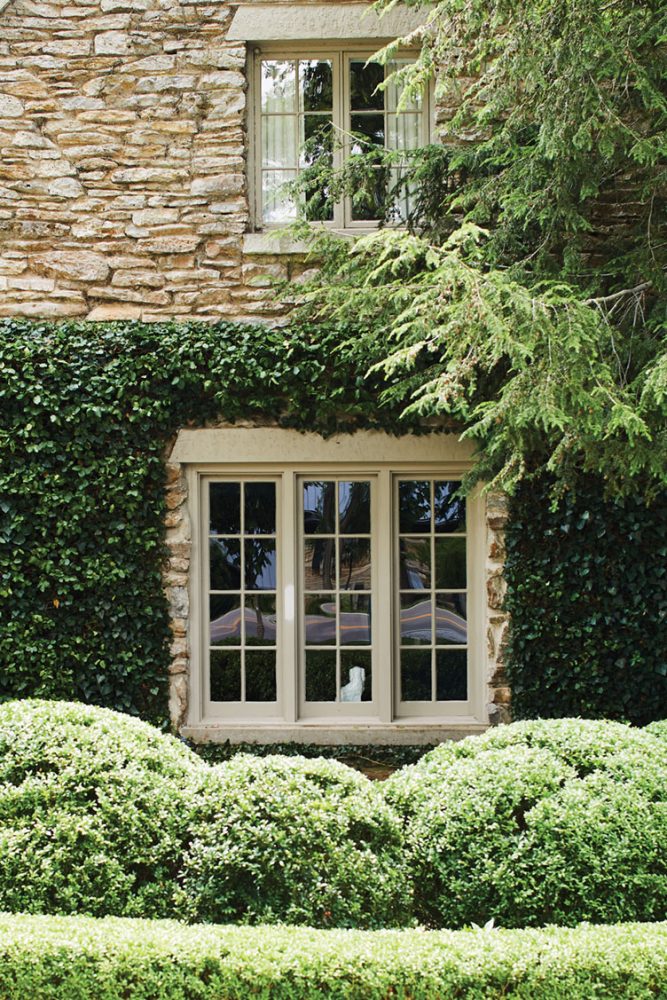 Many of the mature boxwoods came with the house; others were transplanted from gardens undergoing renovation. 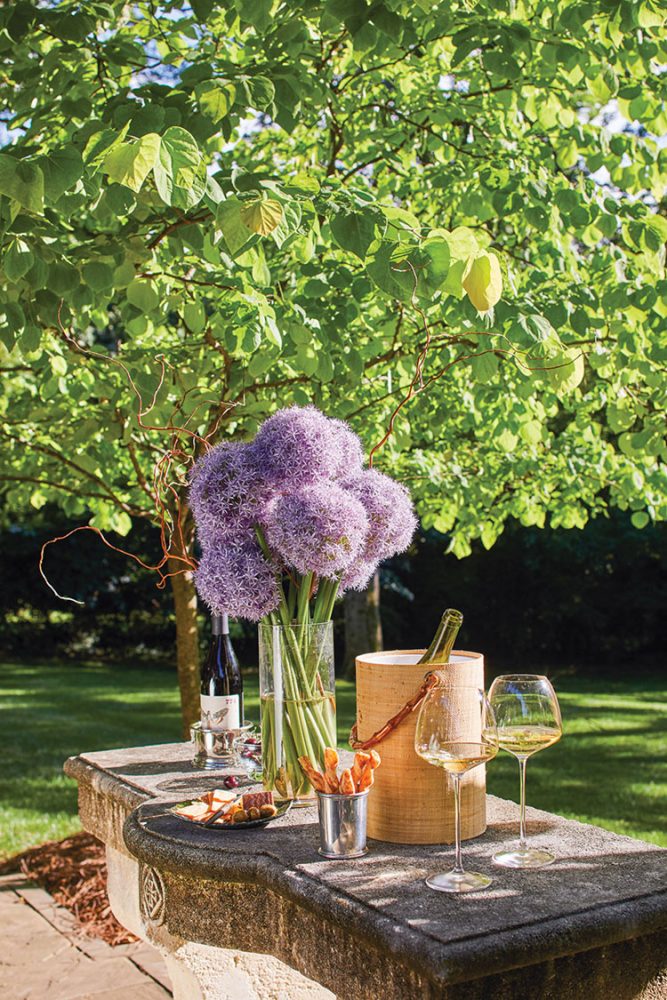 The stone table on a lower terrace serves as a bar for entertaining.

When their daughter, Poppy, who Gavin describes as “11 going on 18,” wants to spend special time with her dad, she heads to their favorite spot, a seating area beneath a shady umbrella on a side terrace. “We’ve always had a thing where she’ll come and say, ‘Hey, let’s go to the talking chairs,’ ” referring to the 1920s metal spring chairs he collects. “That’s where we share a bit of our day and check in.” And ultimately that’s the best kind of offer, and one he’ll surely never refuse.

“When I discovered that this green mohair chair by Oly was named the 'Poppy' chair, I knew I had to design our daughter’s bedroom around it. —Lorie Duke

Poppy’s bedroom, a cheery mix of pink and green, is sophisticated enough to grow up along with her.

The wing chairs were purchased from the owners of their previous house and re-covered in light-blue silk. “They traveled from the old house to this one and will probably go on to the next, but hopefully not anytime soon,” says Lorie.

Lorie converted a guest room into a dressing room, “where all my pretties live,” she says.

A living room vignette illustrates Lorie’s fondness for texture and combining old with contemporary. A vintage Lucite lamp sits atop an antique French chest; the painting is by Nashville artist Craig Greene.

Pink oak-leaf hydrangea pops against a backdrop of textural greens.

Gavin has long loved English gardens, traveling the Cotswolds for professional inspiration, so it was no surprise he was taken with the exterior of this 1920s house.