Rooms with a View: Scenic Wallpaper

Scenic hand-painted wallpaper has been popular for centuries, and still captures the imagination today in all its blooming glory 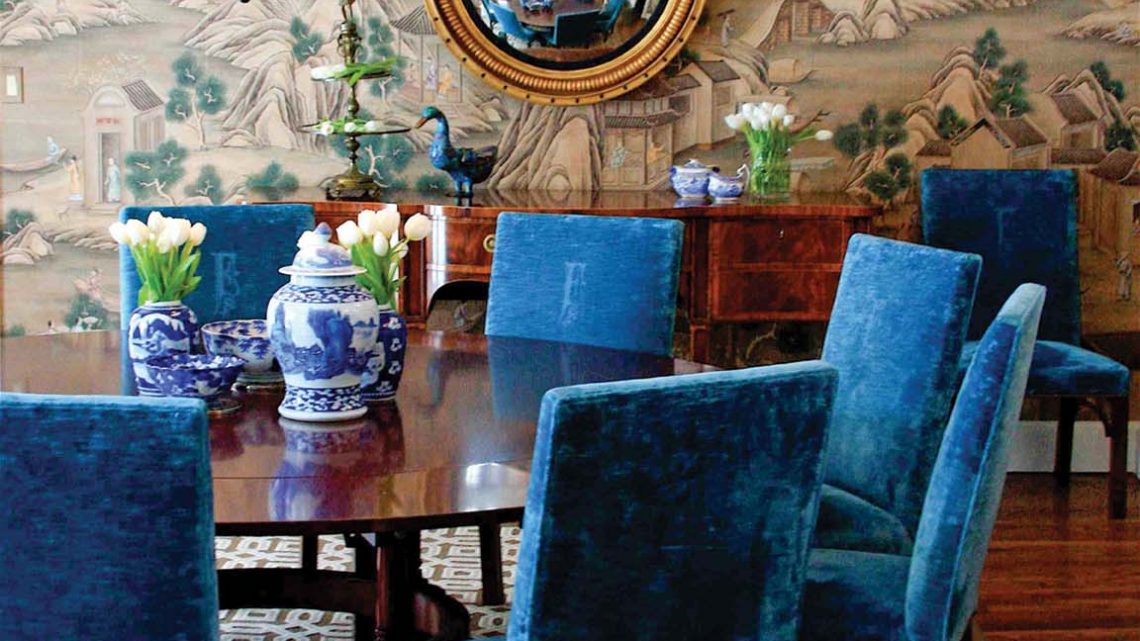 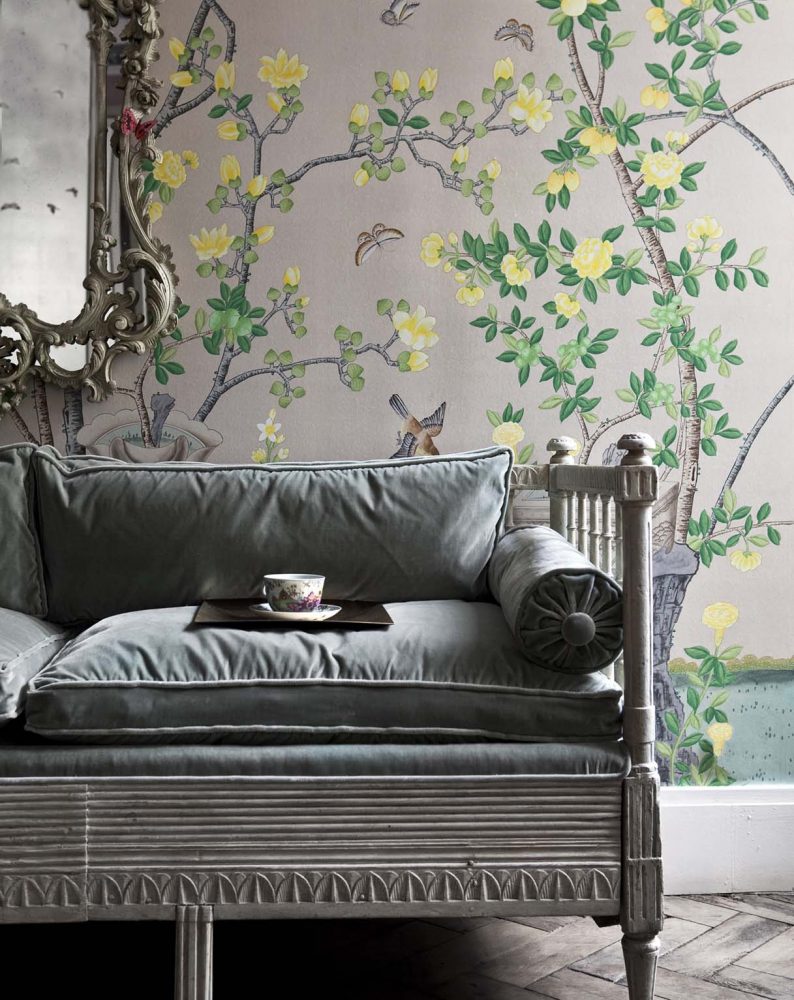 Imagine being transported to a verdant garden, no matter the season, by walking only a few steps inside your front door. This is exactly what Elizabeth Poynor experiences every day in her dining room with its ‘Isola Bella’ hand-painted wallpaper by the venerable French firm Zuber. The pat­tern bursts with lush foliage, exotic flowers, and colorful birds, and its name is Italian for “beautiful island.”

Its design, created in 1842, requires 742 different woodblocks and over 80 separate colors of tempera paint, which are hand-applied to each block. Poynor, who now lives in her childhood home in Birmingham, Alabama, never took much notice of the wallpaper growing up.

“We were told not to touch it and to keep the shades drawn. No one ever explained it to me. I just knew that my mother and grandmother loved it.”—Elizabeth Poynor 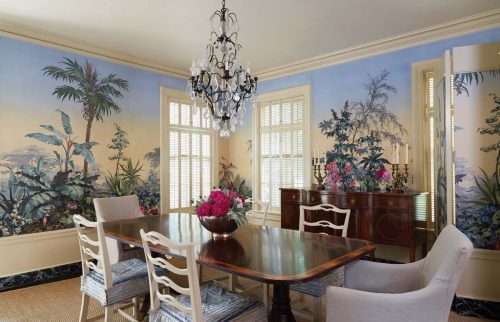 Zuber’s pattern ‘Isola Bella,’ shown in Elizabeth Poynor’s dining room, is an artistic masterpiece. First introduced in the 19th century, it is still produced today, though Poynor inherited her panels from her mother. Photo by Jean Allsopp

When Poynor moved back into the house after her parents died, she found documentation about the wallpaper with correspondence between her mother and Paris-based, Birmingham-born decorator Robert Hiden. It was then she learned about the paper and that it is a depiction of an island in Lake Maggiore, Italy.

“This was one of my grand­mother’s favorite places in the world, and she took me there twice. This room is such a part of me. When I sit in the middle of it, I can see the Swiss Alps on one side and the lake on the other and feel reunited with people I love and miss. The whole island is on my walls.”—Elizabeth Poynor

Many who choose to decorate their walls with scenic wallpaper share Poynor’s enthusiasm for surrounding themselves with beautiful places, whether they have a personal connection to them or not. Before the 1840s, scenic wallpaper often depicted exotic and grand settings far beyond the home, pictorials of historic events, or episodes in Greek mythology. 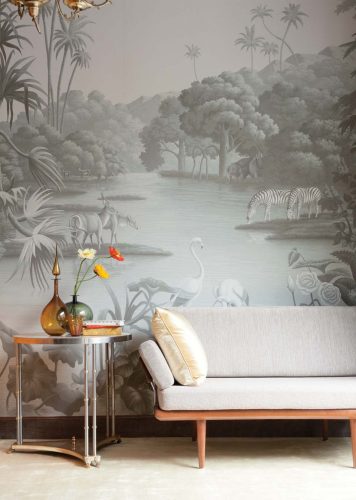 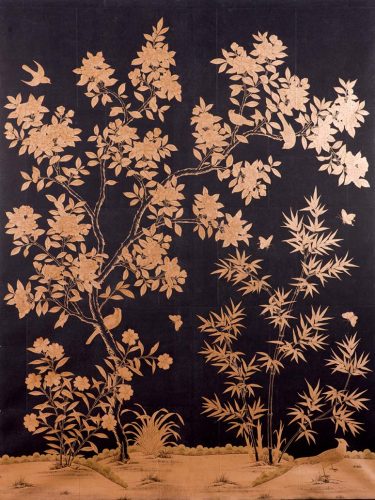 ‘Gilded Midnight’ is a striking Chinese scenic in gold and charcoal. Courtesy of Gracie

“The appeal of these papers was to introduce some other world and to transport you without traveling yourself,” explains Florence de Dampierre, the Connecticut-based interior designer and the au­thor of many books, including Walls: The Best of Decorative Treatments (Rizzoli, 2011).

“Many of the early designs explored the 19th-century age of discovery. They showed the triumph and achievements of man,” adds Dominic Evans-Freke, director and co-owner of British firm de Gournay, whose artisans create hand-painted scenics installed all over the globe.

“We look to the past for inspiration because historic objects that are preserved are generally considered beautiful. People are drawn to look at them and also to look after them.” — Dominic Evans-Freke of de Gournay

The fashion eventually evolved into unpeopled garden landscapes with detailed botanicals such as Zuber’s Isola Bella and Eldorado designs. These patterns turned rooms into paradises at home that were simply decorative without a need for a theme or narrative as was the case in earlier designs. While the historic papers of Zuber are still produced (“buying one is like buying a fine antique,” says designer Cathy Kincaid), and companies such as de Gournay and Gracie also continue to create patterns inspired by history, the trend has moved away from vivid realism—where botanical accuracy was the goal—to softer scenes with chinoiserie as a primary influence. 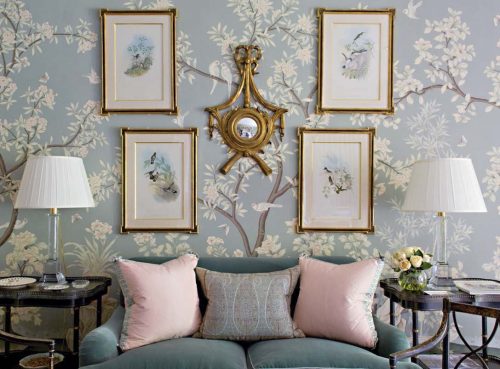 Designer Cathy Kincaid used Gracie’s ‘Hampton Garden’ in a bedroom and sitting area “to create a feeling of a treehouse,” she says. Courtesy of Cathy Kincaid 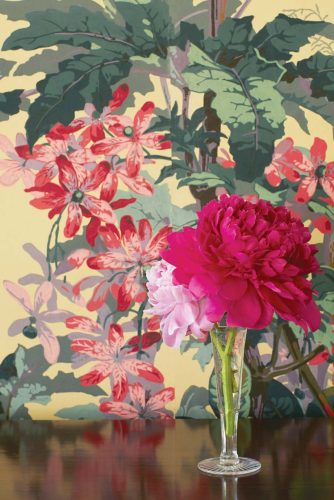 Of course, since all the papers are hand paint­ed, the designs can be reinterpreted for home­owners according to their desires. “We have clients look at our patterns as a starting point, but they can change anything they like—the mo­tifs, the colors, the background,” says Jennifer Gracie of Gracie, a family firm founded in 1898. “You don’t like peonies; we will put in magnolias instead. You love butterflies; we will add more, totally custom down to the very last detail. We also work from scratch if someone comes in with a photo or painting as inspiration.”

While some believe their own homes may be too modest for scenic paper, de Dampierre disagrees. “Even if you only have a dining nook, that space will look beautiful with hand-painted wall­paper. They don’t have to be in grand settings,” she says. “I love to use these wallpapers in rooms with limited windows,” adds Kincaid. “It really expands the space and gives the room a sense of perspective.”

Although most designers agree that the papers can be used in almost any space, there are rooms that seem to naturally bloom with the treatment. “I would use scenic wallpaper in an entry hall or dining room,” says designer Jan Showers, explaining that is where they were most often used historically. Designer Bunny Williams concurs. “Dining rooms can have more pizzazz than other spaces because you’re in them for short bursts of time, so they don’t become overwhelming,” she says. “Also, scenic wallpaper works best when it’s relatively unobstructed. Therefore, it’s good for a dining room where the table floats in the middle of the room.” Frank Webb and Matthew White of the New York design firm White Webb believe that for dining rooms, “the more fanciful and exotic, the better.” 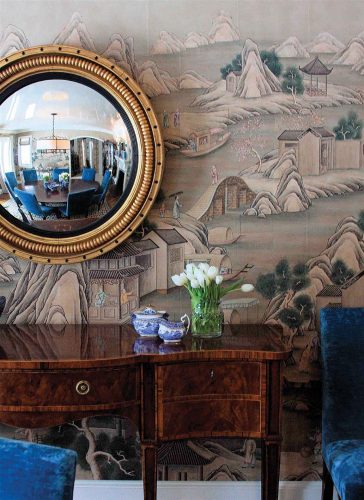 Designers Frank Webb and Matthew White wrapped a dining room in Gracie’s ‘Ming Village,’ a design in the style of panels produced in the 18th and 19th centuries. Courtesy of White Webb

No matter the location, there is something spe­cial about these wallpapers that has kept them in favor all these years. “Scenic papers offer multi­ple layers and perspectives to explore. You can look at your paper for years and suddenly notice a little flower that you never really saw before. The concept is that there is always more to know,” says Gracie. She shares how Aerin Lauder want­ed the same papers that had been in her grand­mother Estée Lauder’s home and office when she got her own apartment.“ They are handed down and stay in families,” says Gracie. “Truly beautiful and finely made things never go out of style.” 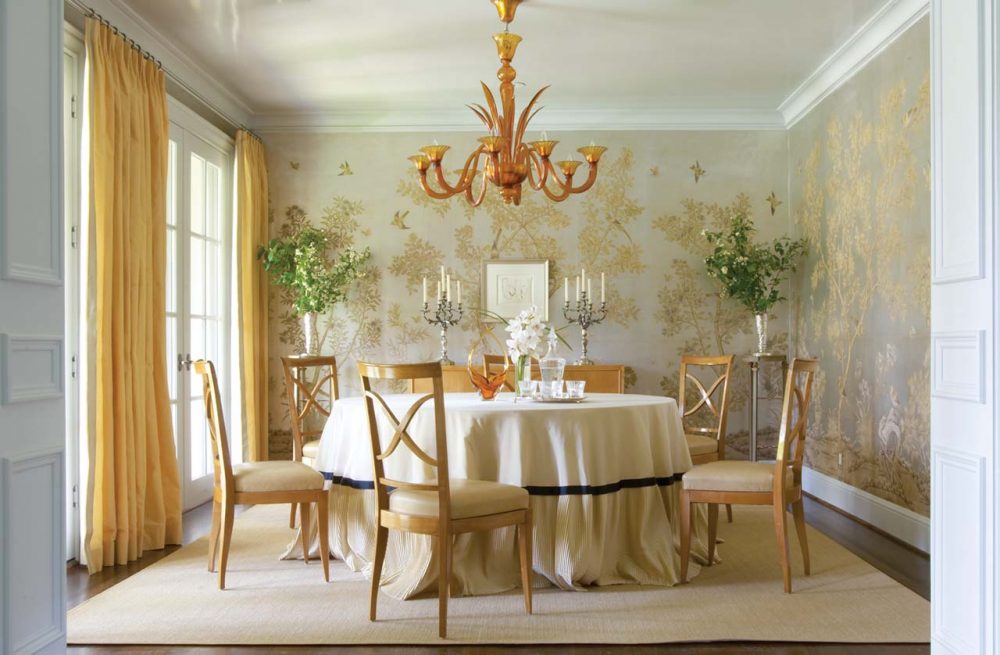 In a dining room designed by Jan Showers, a metallic tree-lined paper envelopes a scene awash in gold and amber tones. Courtesy of Jan Showers 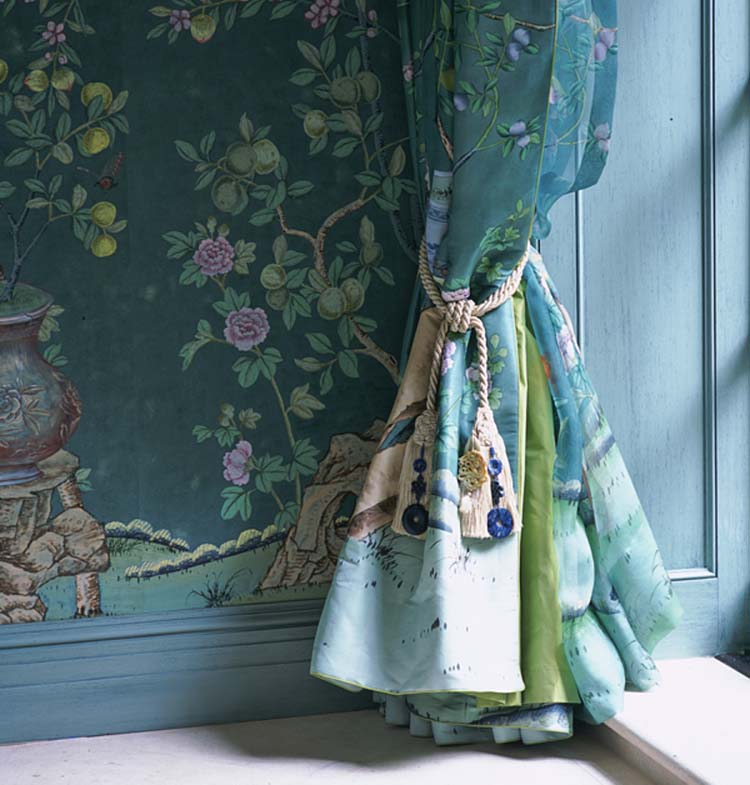 De Gournay’s ‘Jardinieres Citrus Trees’ on a blue background in a room by Charlotte Moss. Photo by Pieter Estersohn/Art Dept 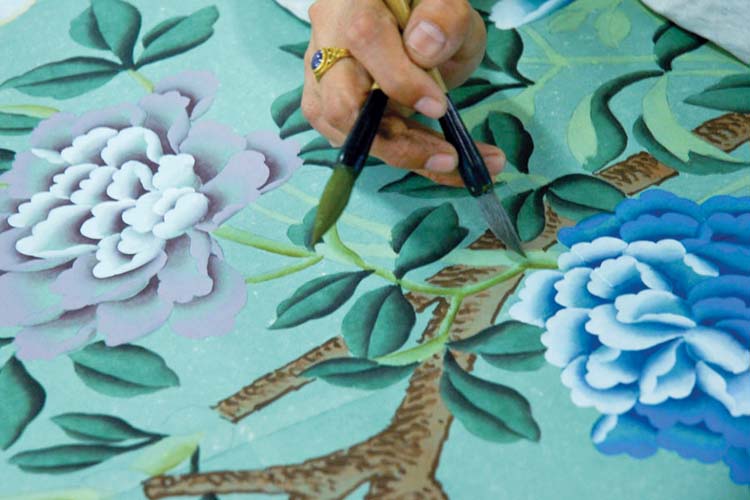 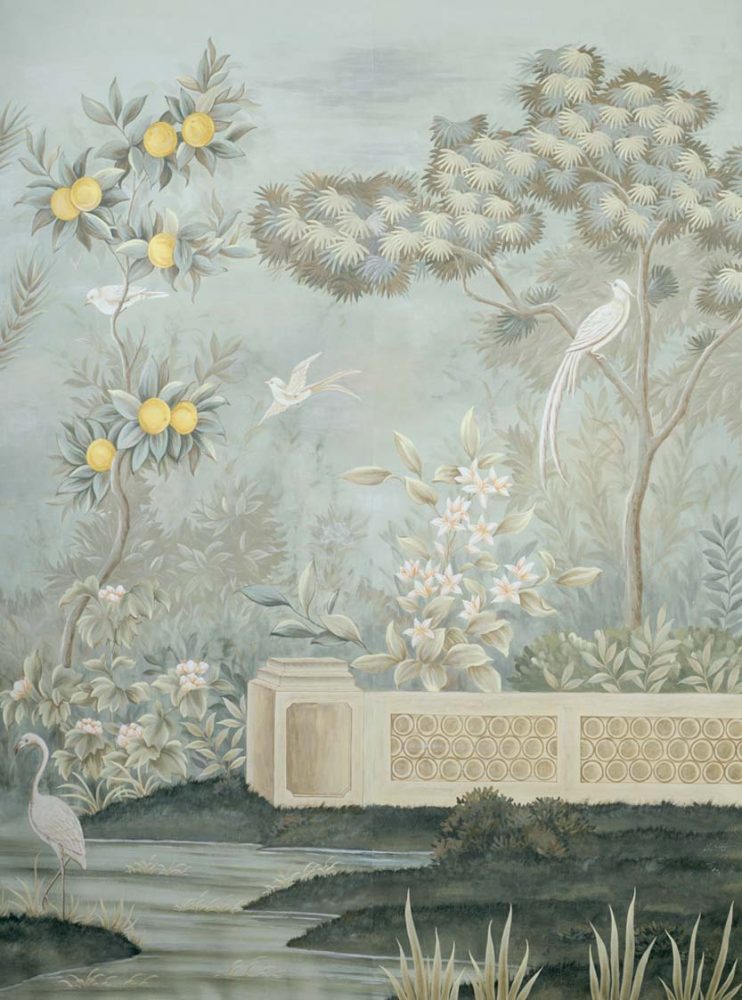 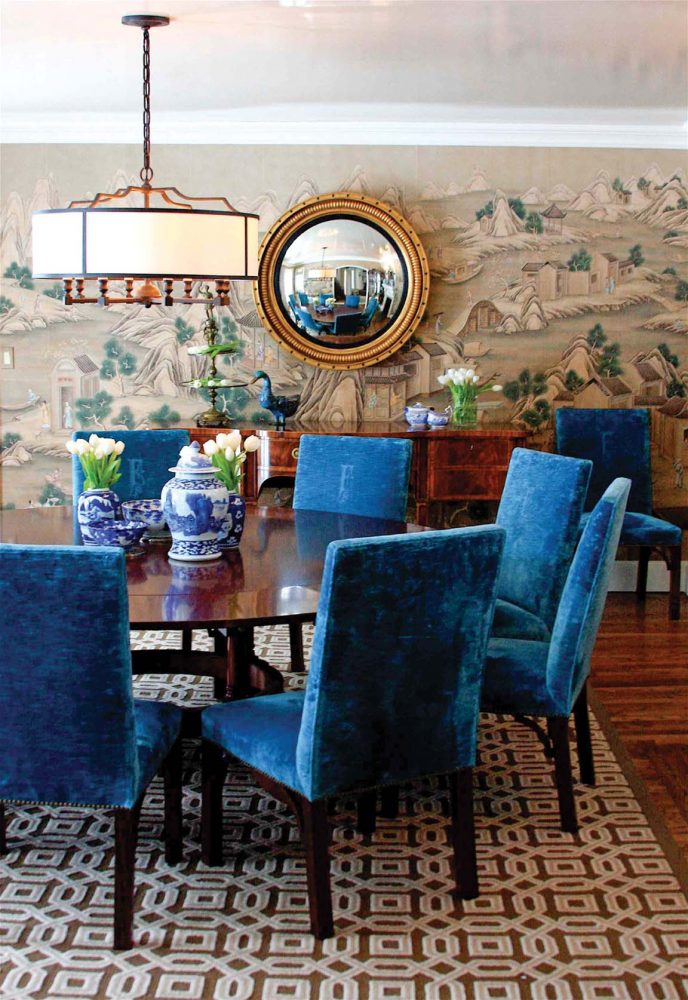