The garden flows gracefully from one venue into the next. It swings fluidly from restive to energetic as you move through the space. If Andrew Grossman’s garden feels deftly choreographed, it’s no wonder. This landscape designer trained as a dancer, but he currently expresses movement with plants.

Although Grossman insists he “wasn’t seriously looking for a property” when he saw the acre in Seekonk, Massachusetts, 20 years ago, it didn’t take much to convince him of its value. Certainly he was not impressed by the dilapidated Cape Cod–style cottage or its array of garages circling around. If he was going to buy into land, he wanted more property than the single acre attached to the house. Or so he thought. But then he caught an eyeful of the adjacent wildlife sanctuary stretching beyond the acre and realized that he would be getting a free view of majestic, unspoiled beauty. “The borrowed landscape sold me on the property,” Grossman admits.

Botany was always in the back of Grossman’s mind. Even when he was studying modern dance at Bennington College in Vermont, he gave classes in botanical science equal time. While his troupe was in London, he moonlighted helping maintain urban gardens. Upon returning to the States, he worked as a floral designer to supplement his performance earnings. And garden work helped pay his tuition when he returned to Bennington for a master’s degree in choreography. In 1993, Grossman decided to pursue garden design professionally. Five years later, he bought the Massachusetts cottage in need of renovation and began expressing himself horticulturally. 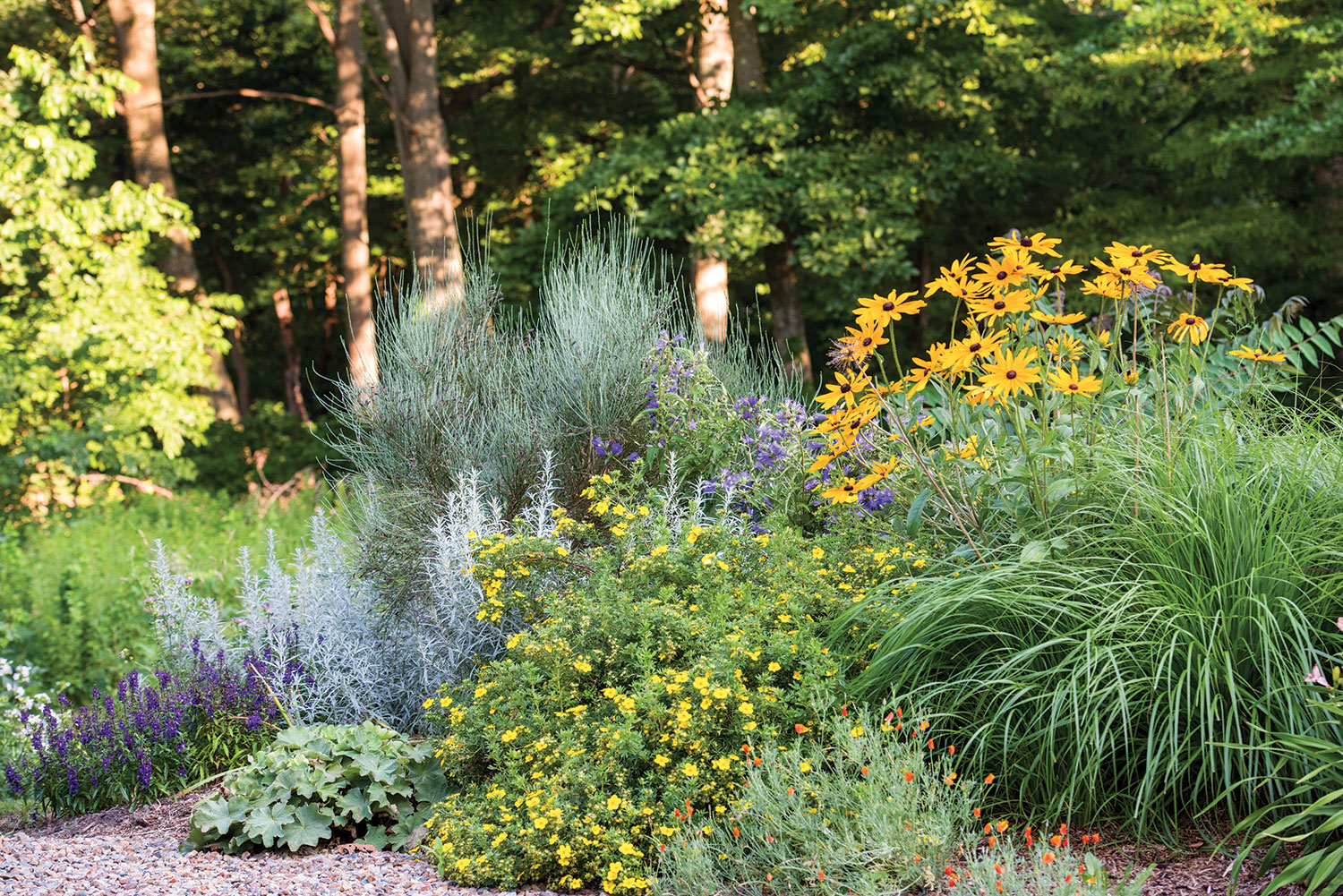 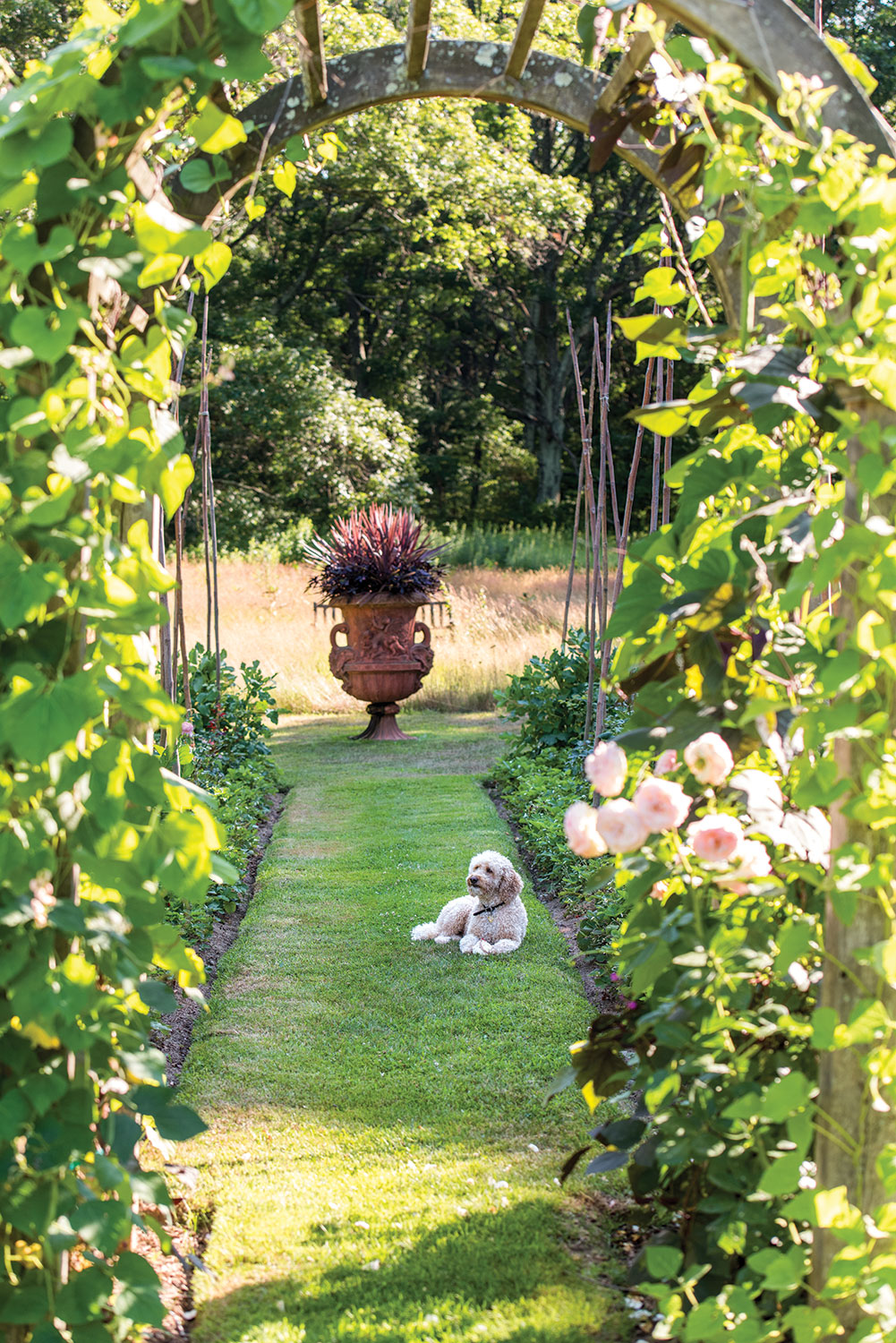 Puck the miniature Labradoodle rests in the shade of the dinnerplate dahlia allée framed in ‘Eden’ roses. 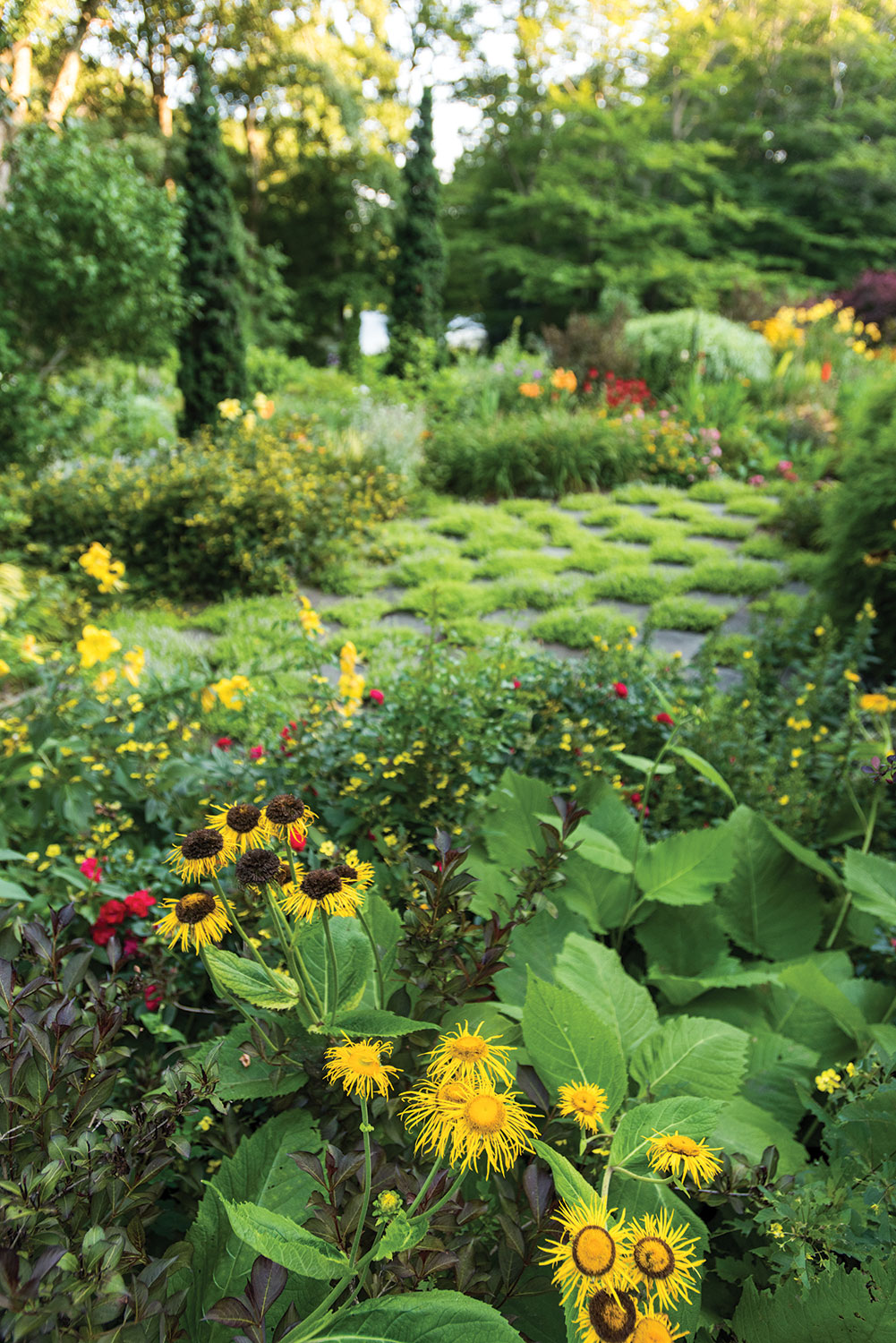 Behind the house, Telekia speciosa (in the foreground) wades in a rivulet of yellow Lysimachia ciliata ‘Firecracker’ and red Flower Carpet roses beside a checkerboard of thyme. 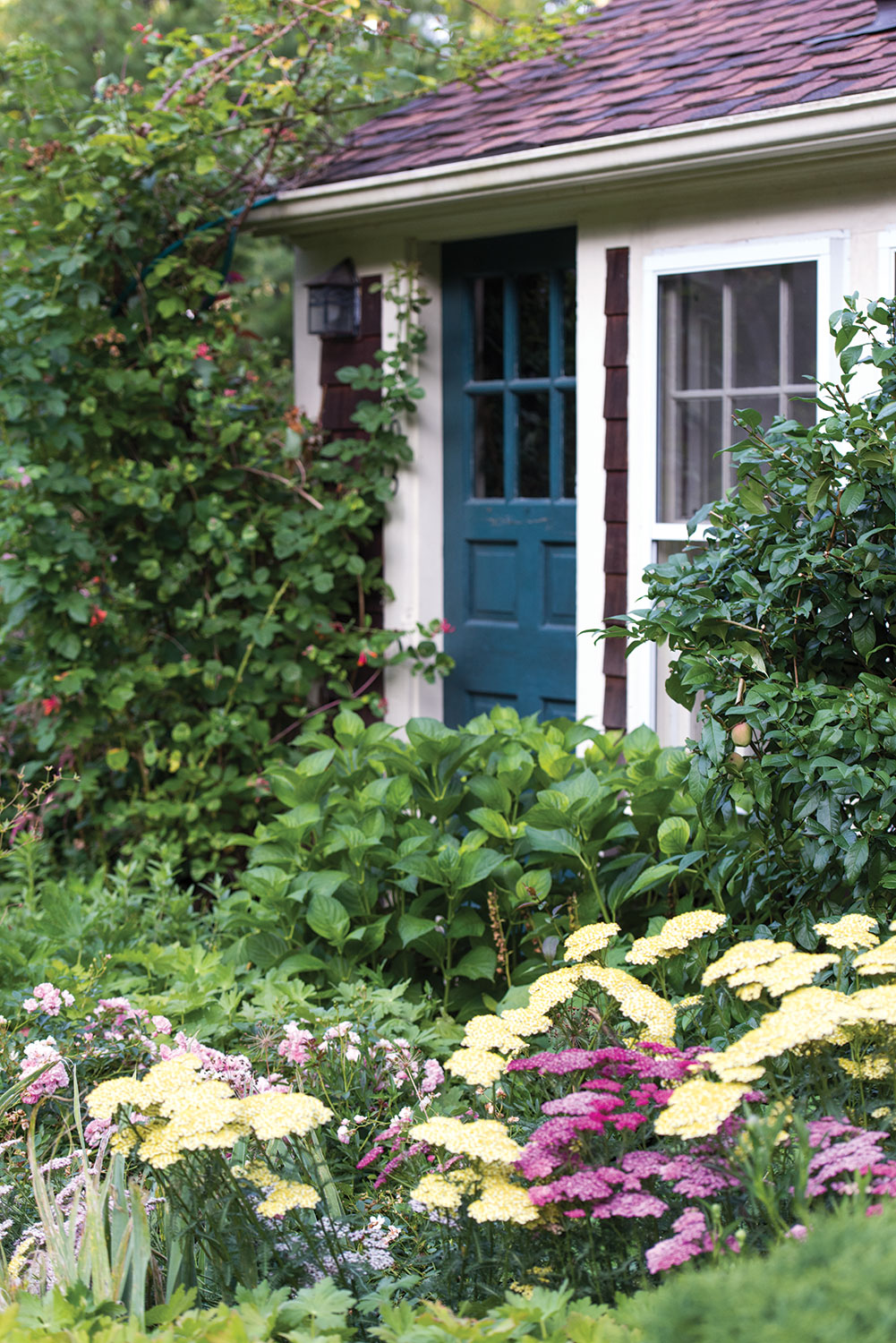 Yarrow is part of the warm welcome in front of the house, while Lonicera sempervirens ‘Major Wheeler,’ a red-flowering honeysuckle, softens the entrance. 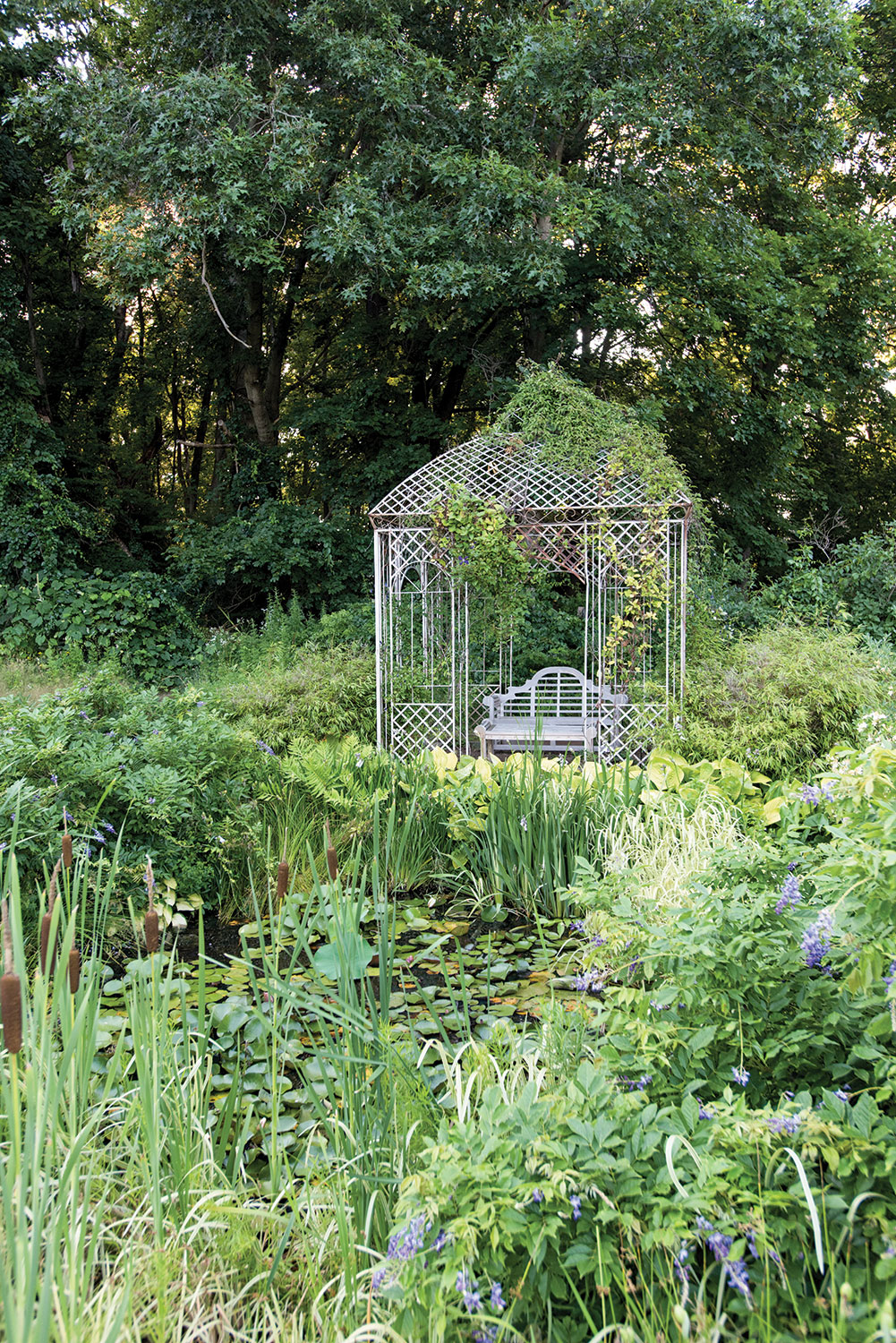 Clematis montana ‘Rubens’ and Clematis ‘Jackmanii’ crown the gazebo with a clear view of a pond created to let Grossman experiment with the full spectrum of water lilies. On its banks, wisteria blossoms most of the summer.

From there, Grossman shifted his focus to the house. Originally, it was strangled in a nasty snarl of too many driveways and surplus garages. As soon as excess pavement was eliminated, he framed the cottage against a “hot garden” to jazz up the weathered shingles. Cresting the terrace on the house level, the color scheme is yellow, red, and orange. “It’s the bright, vibrant Oz interlude,” he says, referring to the combination of crocosmia, mandevilla, gladiolus, echinacea, daylilies, and Asiatic lilies.

Leaving generous pockets for annuals, Grossman finds that broad swaths of color— even vibrant color—are easy on the eye. “Masses are more relaxing to look at,” says the designer, who likes to group plants by color, not necessarily variety. “Massing creates tempo. Like movement, the hues are jumping up in the air.” Meanwhile, the house received a whole lot of cosmetic surgery, going from pathetic to pleasing. For the landscape at the front entrance, Grossman embraced a cottage feeling, selecting pastels played out in lilacs, roses, honeysuckle, yarrow, foxgloves, perovskia, and alchemilla. From there, he worked up the hill, adding a gazebo and another water lily pond. All the disciplines of florist, designer, and dancer come into play in this garden of many moods. 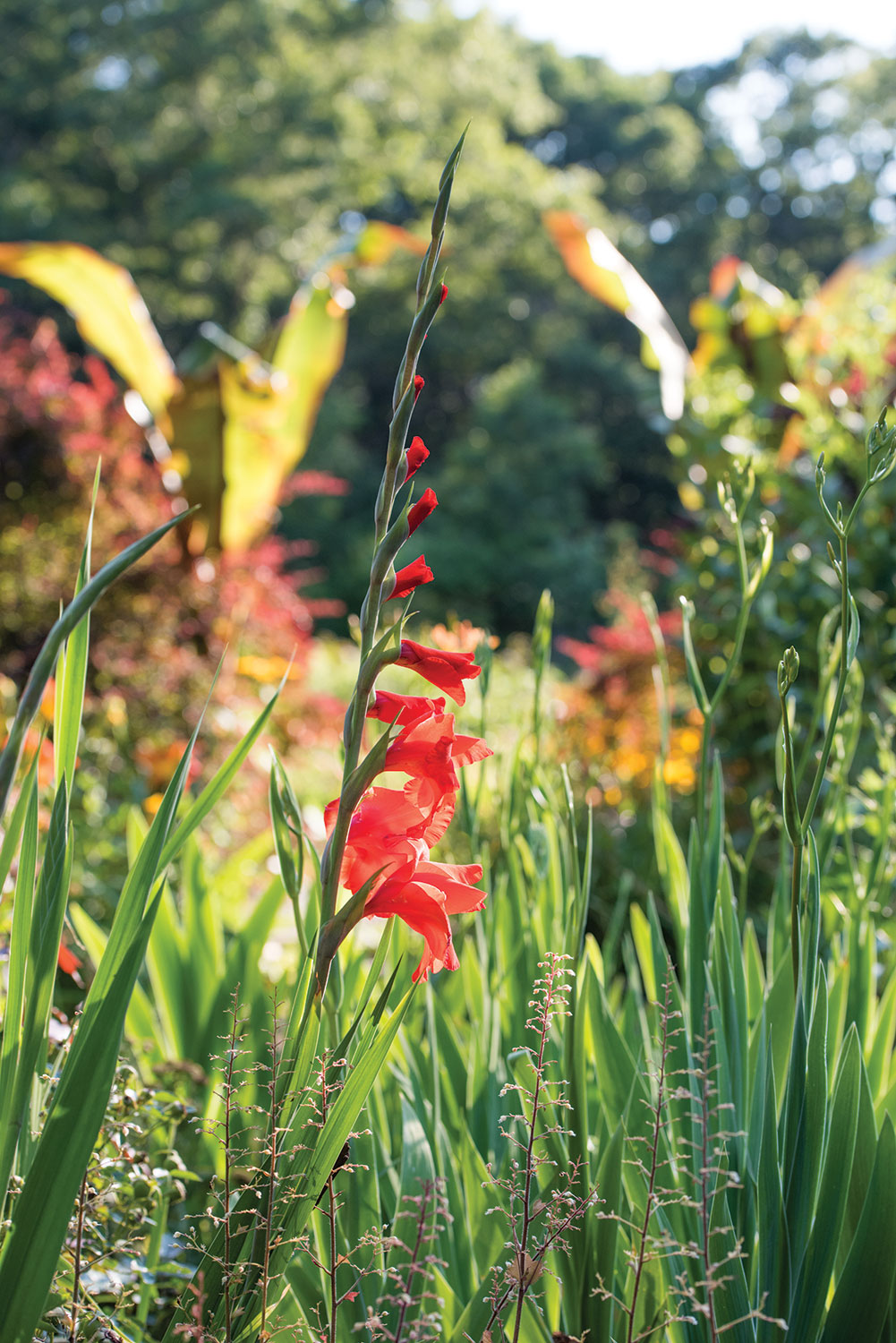 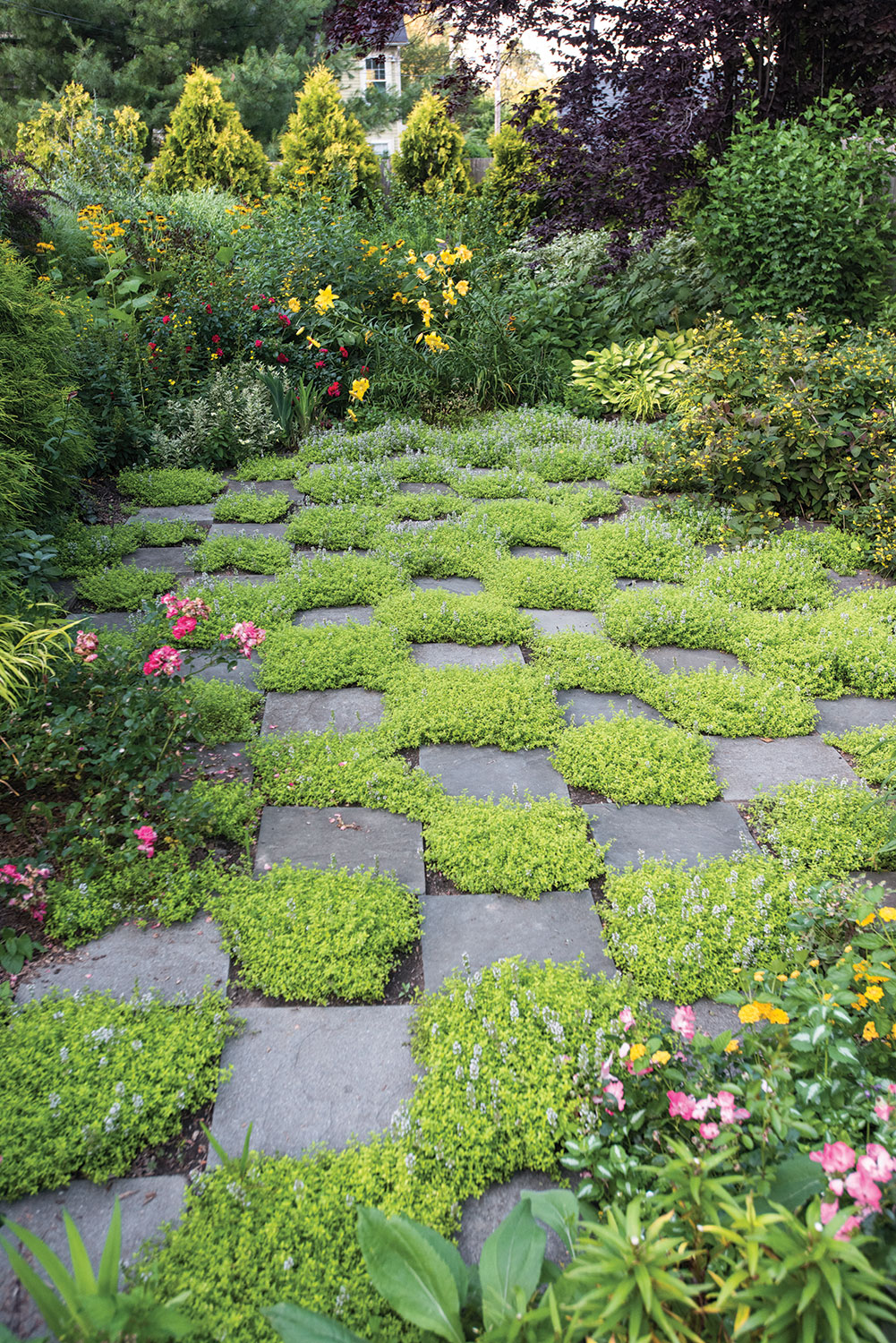 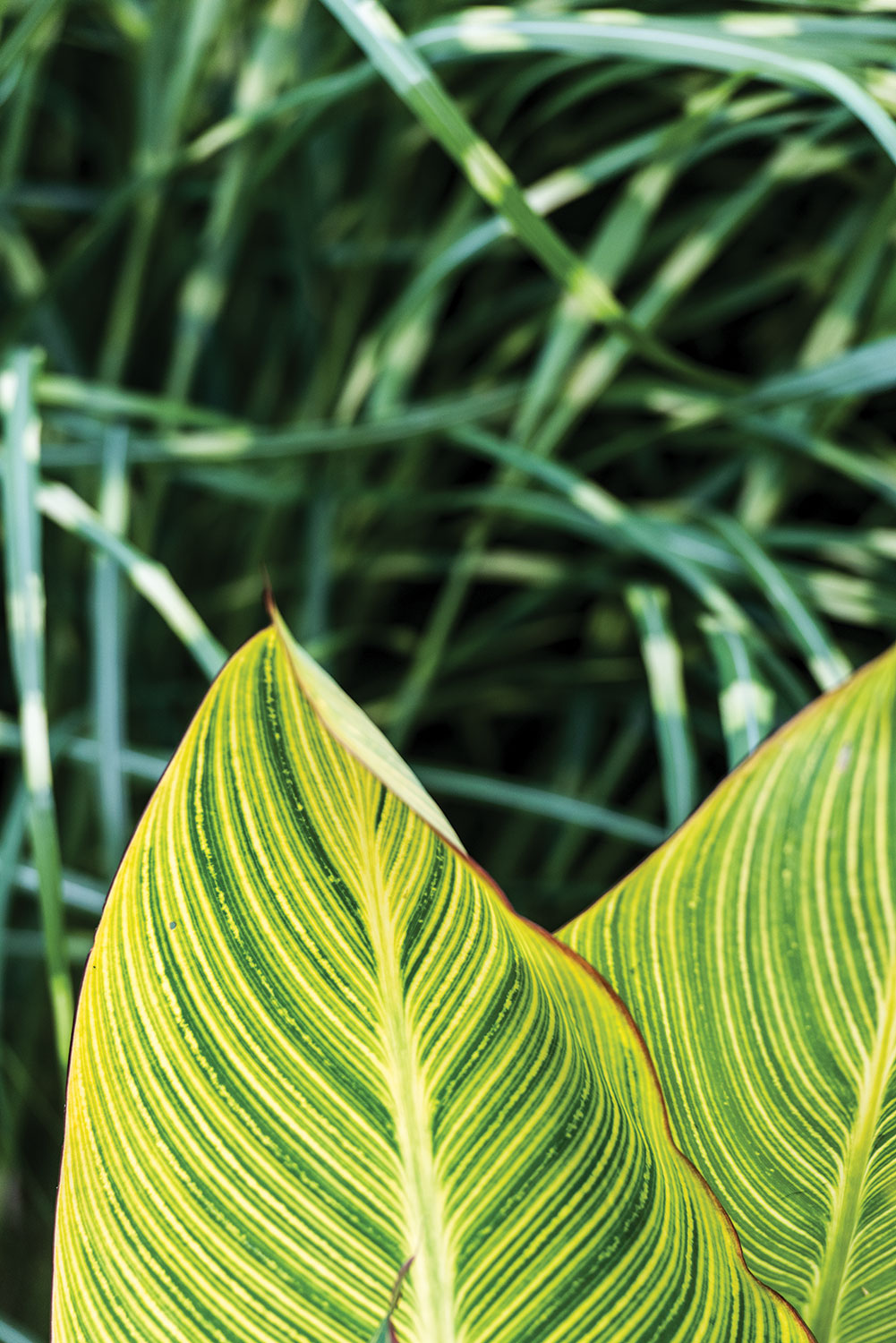 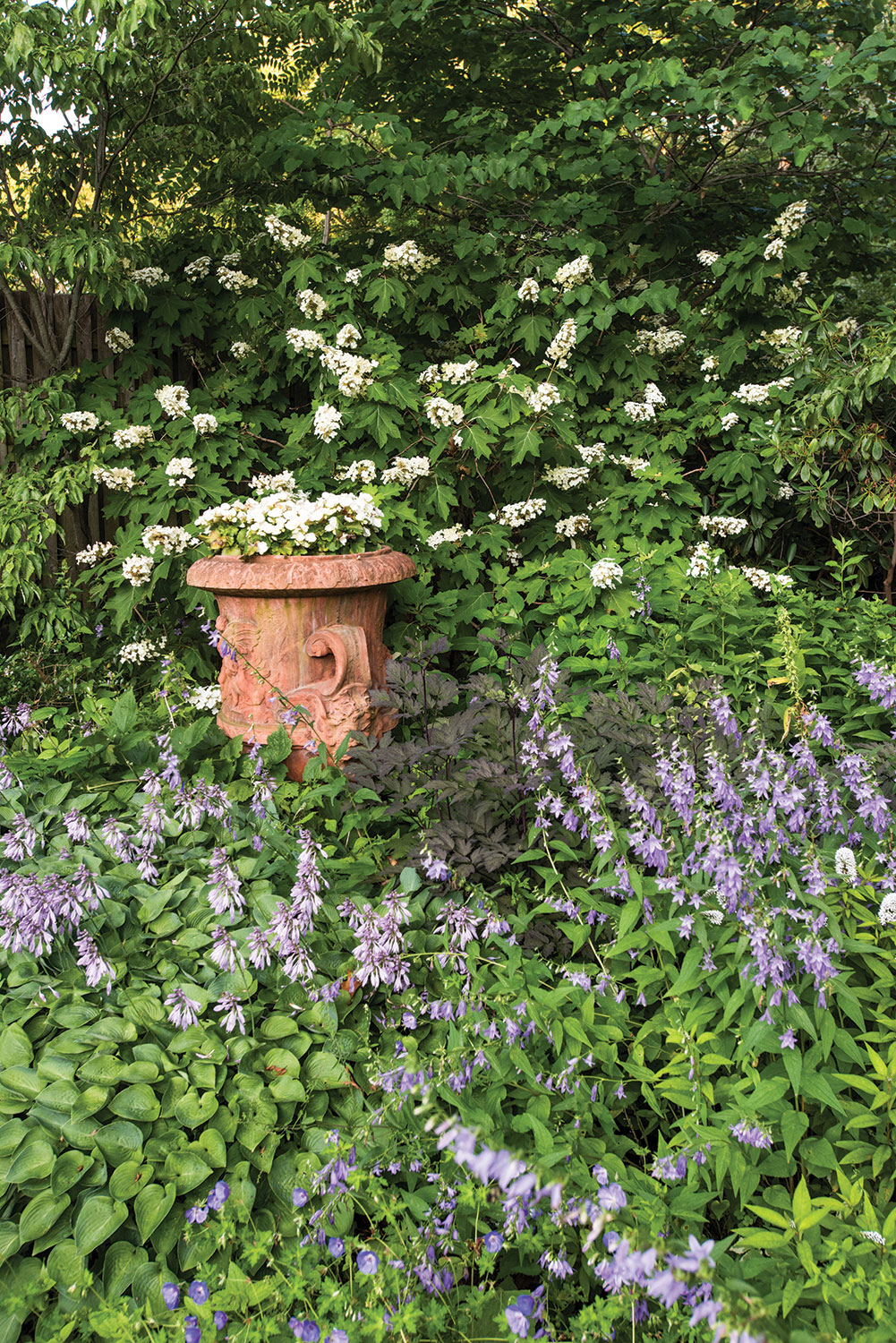 An urn serves as a focal point amid layers of ‘Snow Queen’ hydrangea, Adenophora confusa, and hostas. 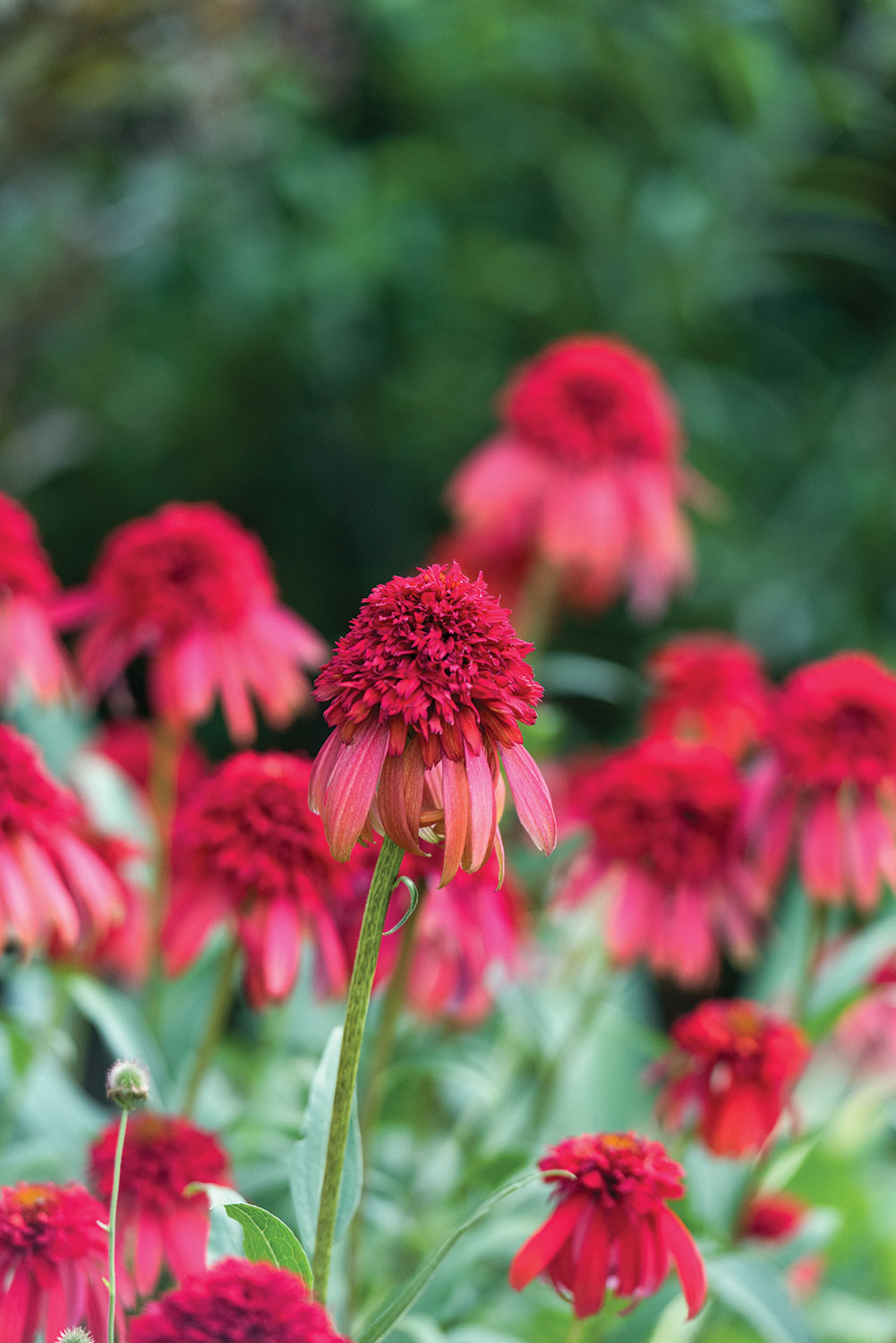 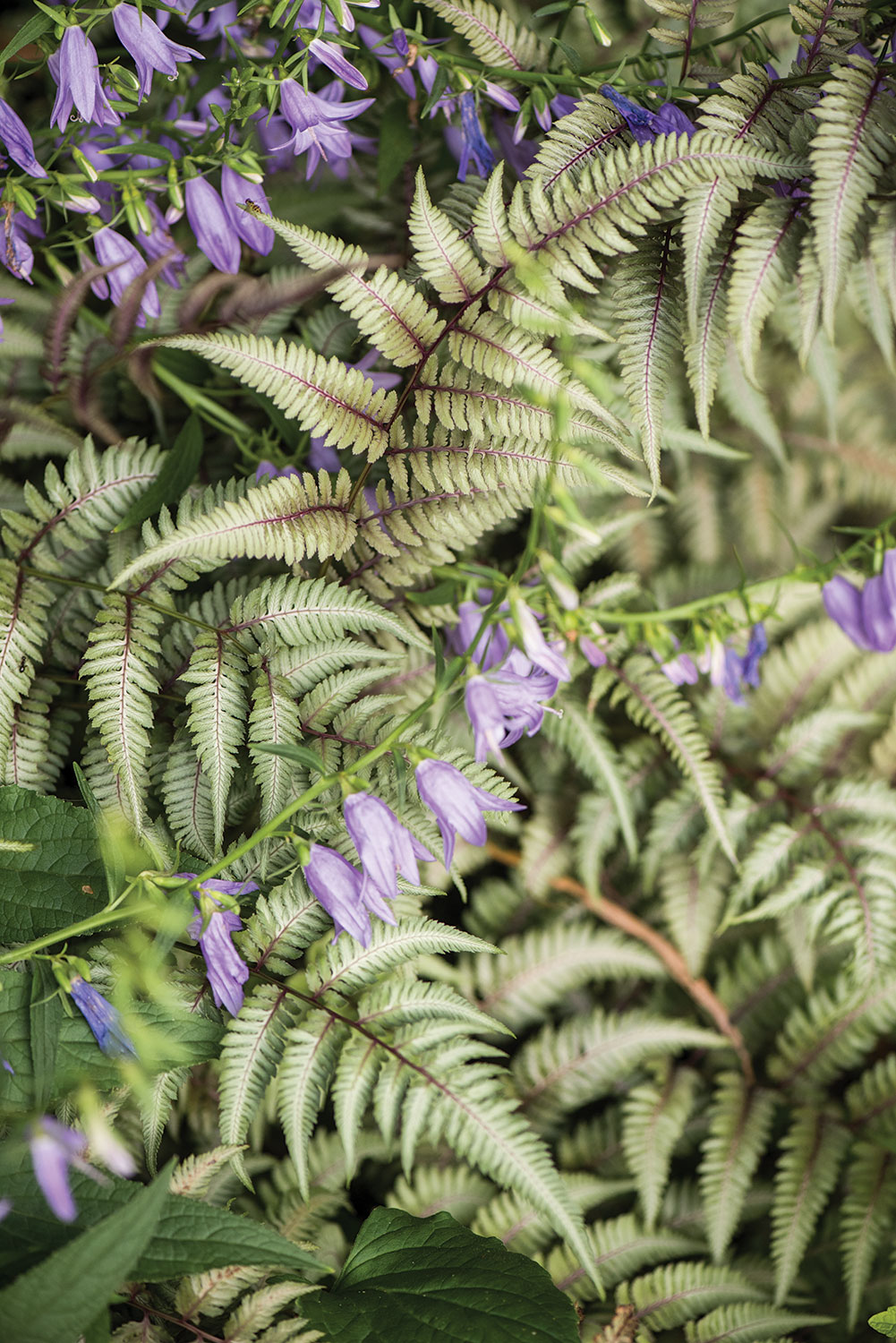 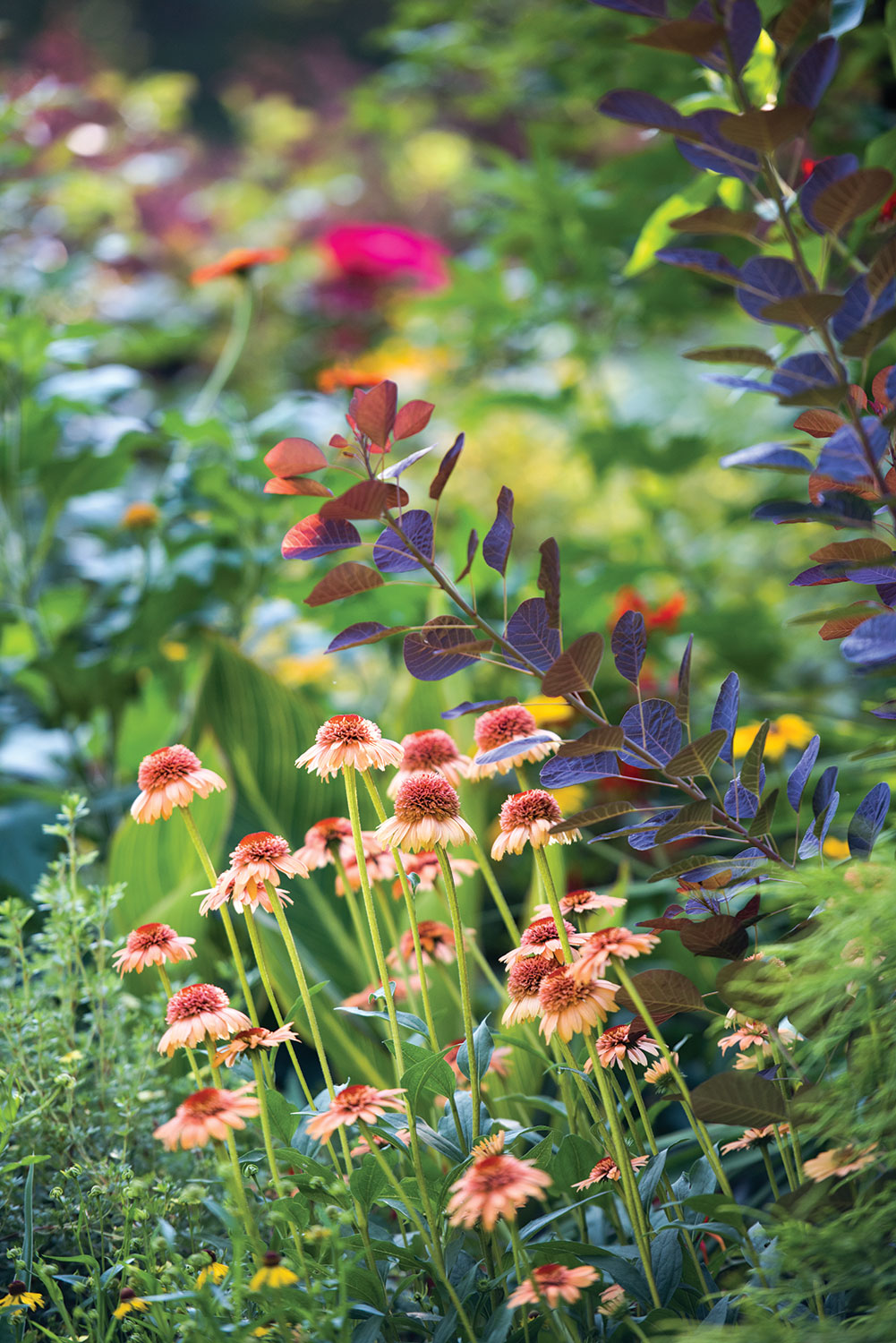 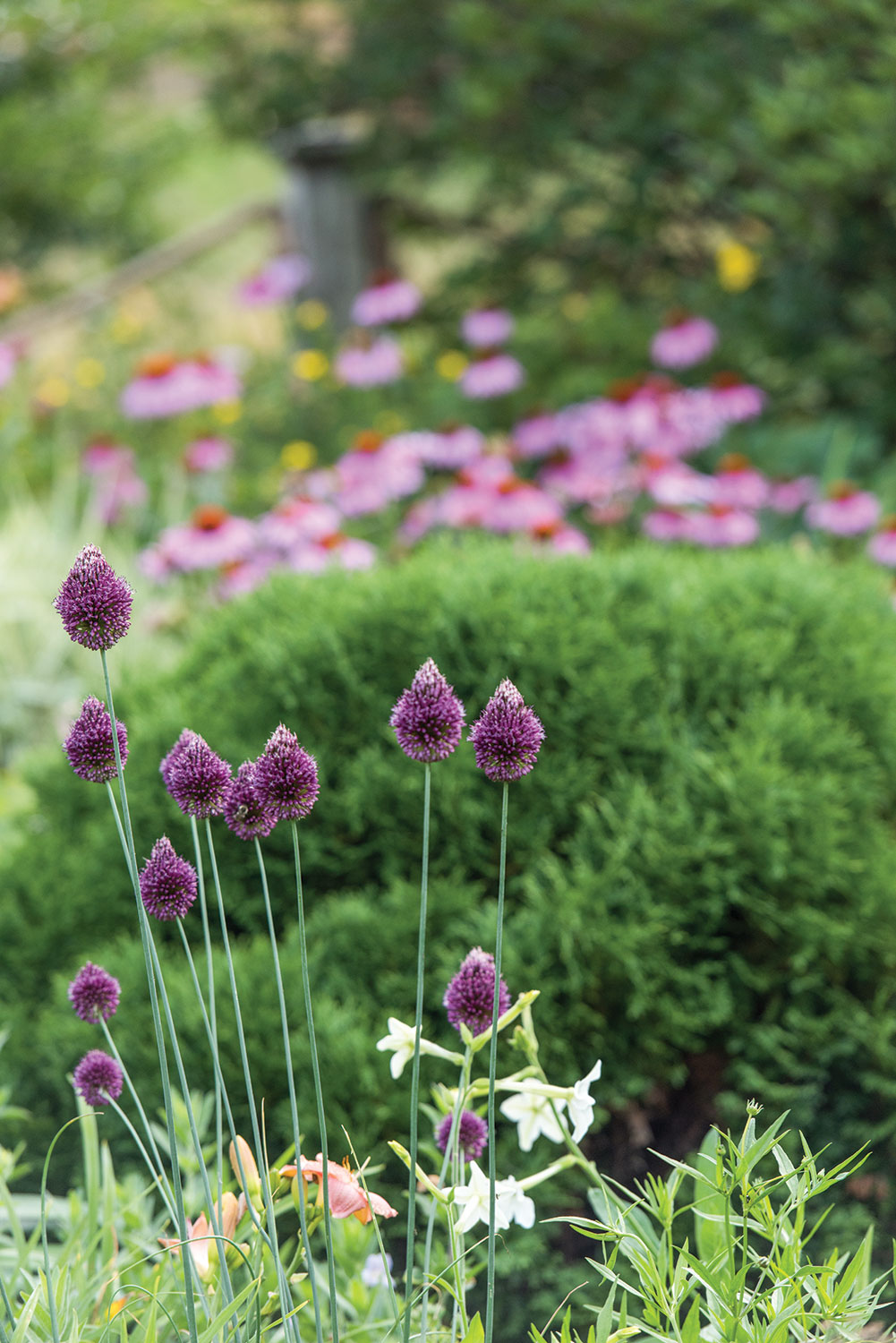 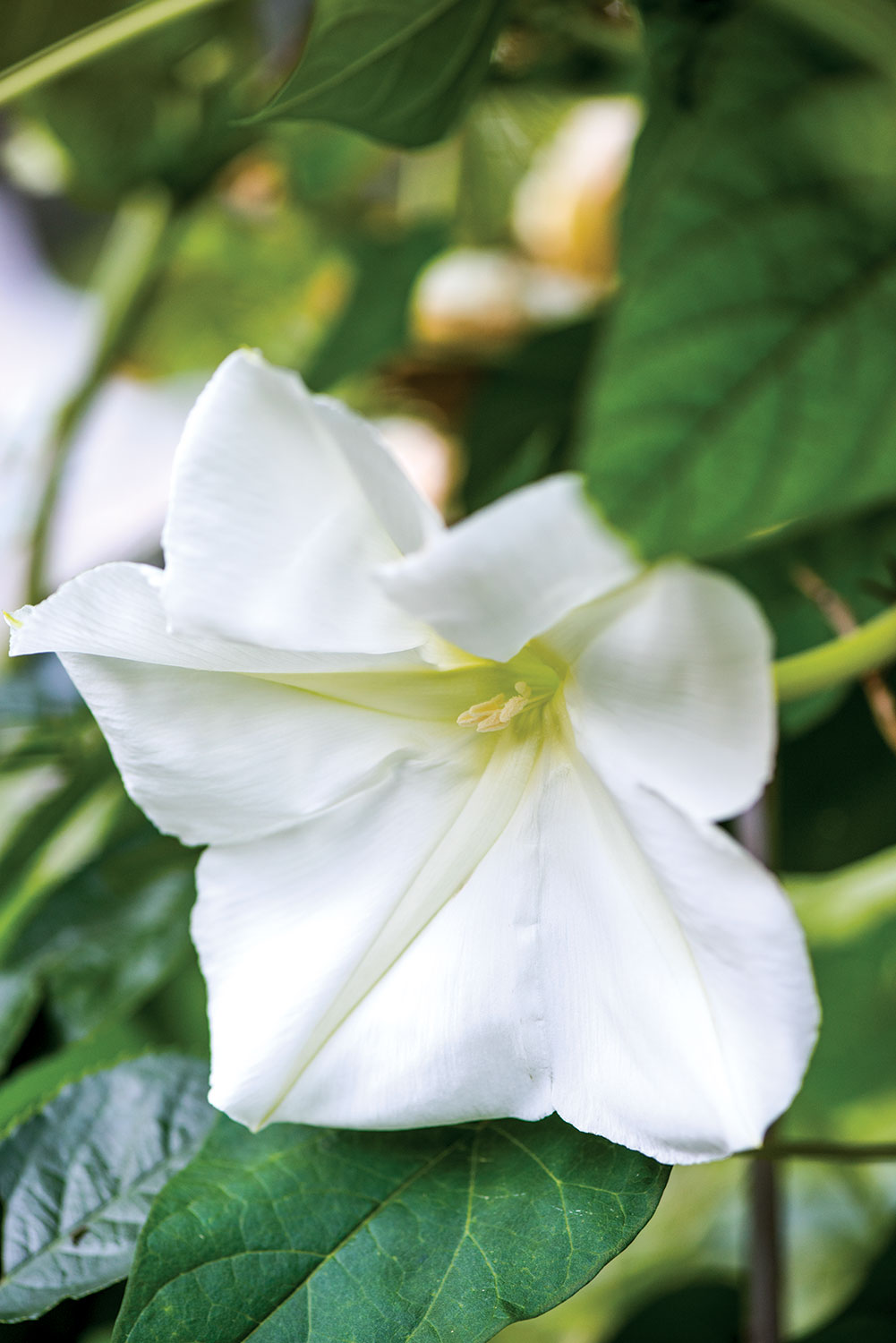 When other designers talk about movement in the garden, they usually point to the swaying grasses or rustling leaves. Grossman takes all these elements into account for his plant and design selections, but he also thinks physically. “Diagonals move you through a space; they pull you along,” he says about the hopscotch of colors along his paths, while “pairings stop action,” referring to the twin globe arborvitaes on either side of an entryway. Grossman has applied thought and understanding to every twist and turn. Perception and plot play out in space. It’s an expertly choreographed performance that leaves one invigorated and always wanting more.

Adeptness with color and a thorough knowledge of plants are the keys to Grossman’s artful compositions. In choreography, the performers interrelate, and a garden should also connect its players in a fluid, unified expression. To accomplish that, Andrew Grossman picks up hints of color between plants. Sometimes it’s a repeating hue bounced between blossoms, but often the repetition is subtle. Maybe a daylily echoes the yellow from the tips of a chamaecyparis’s boughs or a blood-red blossom reads off the stem of a burgundy perennial. Whether it’s the shade in a flower throat, the tinge of a leaf, or even the blush of a bud, everything becomes more meaningful when a dialogue is created.

And when a garden includes annuals as well as perennials, shrubs, and trees, those echoes change every year. It makes for a dynamic but harmonious picture. Practicing the craft requires an astute knowledge of plants and their traits. Studying blooming times and becoming conversant with the plant from bud to seedpod are essential. The result is more than just a landscape—the composition is elevated to art.