In excerpts from Private Gardens of the Bay Area, writers Susan Lowry and Nancy Berner explore the diversity and beauty of some of Northern California’s most notable gardens and landscapes

There is something dreamy about the St. Eden Garden. The quality of light under the ancient oaks, the muted colors, the soft rounded outlines of the shrubs and perennials, a sense of remove from the wider landscape all combine to create the mood of repose and beauty that have been the hallmark of this garden for almost three decades. Pam Kramlich has worked with many landscape professionals, and each has contributed here. But Kramlich herself, inspired by gardens of Provence, has a clear sense of the qualities she wants in her garden and has been able to preserve its rare atmosphere over the years… More recently, Silvina Blasen swapped out much of the lavender for the gray rounded form of the olive ‘Little Ollie,’ as well as boxwood balls and mass plantings of blue fescue, true to the color scheme and emphasizing the perception of soft shapes floating beneath the gnarled forms of the oaks. Pam Kramlich’s little bit of Provence continues to feel like a world apart, a respite from the hard light of the Napa sun that shines on the endless rows of vines glimpsed through the frame of the oaks.

Mary Reid is at heart a painter and Lew Reid is passionate about plants. That turns out to be a superb combination for garden making. . . . But more than the sum of the many precious individual specimens in this garden, it is the sense of color in the composition that sets it apart. . . . While she uses a wide range of colors, there are certain tones that tie the composition together, like chartreuse, which makes other colors pop when displayed against it, and the silvery grays of the lavenders. The red-leaved trees and shrubs, from the four different cultivars of the smoke bush to the red berberis to the reds of numerous Japanese maples, provide vivid counterpoints.

This elegant house designed by Willis Polk was much bigger than anything that Jon Kaplan and Julie Billings had been considering buying, but they were attracted to its graceful lines and its 105-year old, 1.5-acre garden. The house and garden predate Polk’s masterpiece, Filoli. Here, unlike at Filoli, Polk designed the garden as well, and the house and garden present a seamless unit. . . . [Kaplan and Billings] have respectfully preserved the structure of the garden, the formal terraces and hedging, the rose garden, and the parterres, but within these boundaries there is an increasingly diverse plant community. Taking their cues from what was already there, they have augmented as well as added. . . . Kaplan and Billings have different gardening styles and skills. Kaplan likes controlled chaos, Billings likes neat—a good combination when dealing with this complexity, because if it were too chaotic the classic structure would disappear, if too tidy the heart would go out of the garden. 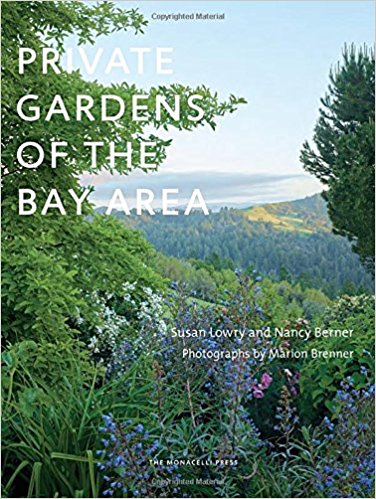