I remember the melodious voice of Dinah Shore beckoning from the television that Americans should “Make a date today to see the USA in your Chevrolet.” I have always wondered if that refrain so smoothly delivered by Ms. Shore was the subliminal message that has since fueled my wanderlust.

Fast-forward to one of my dinner parties in East Hampton, one for girls only. After dessert, I posed the question to the table, “Would everyone share one thing on your bucket list?” After another glass of wine, what ensued was the most animated post-dinner conversation I have ever experienced. When it came time for my reveal, I announced, “I want to see the South like Charles Kuralt in an RV.”

My friend Jane Scott Hodges, a Southern gal like me who lives in New Orleans, immediately jumped onboard with the idea. Soon after, we hatched a plan for a road trip from Richmond to Charleston, channeling a spirit of adventure à la Jack Kerouac or Thelma and Louise, but of course without all that drama.

Might we have traveled some of these byways and highways before? No doubt. Growing up in Virginia, I remember so well our family setting out with maps and picnic baskets, playing games in the car (pre-iPhone or iPad), and braking for historical markers. My brother, Ed, and I commandeered the two long seats in the back of our Country Squire station wagon, which allowed us to spread out and watch the world go by.

Now, Jane Scott and I have packed our bags, compiled our playlists, and rented a Chevy SUV (deciding that an RV was probably too hard to handle). These two designers and design/history groupies are ready to hit the road.

After meeting at the Richmond airport, we begin the short trek to Williamsburg, where we check-in at the Williamsburg Inn in the heart of the historical village. The Inn is where old world meets new; where a 21st-century hotel maintains a beautiful 18th-century accent of style.

In the morning we take a 40-minute drive to visit several of the plantations along the James River. The road to Charles City County is an awakening forest with early buds and leaves a vibrant green, and wisteria, like giant brushstrokes of lavender, blanketing tall oaks and pine trees.

We first arrive at Berkeley Plantation, where tall brick pillars surrounded by monumental boxwoods greet us, along with a guide who energetically weaves the story of the plantation. Jane Scott and I begin recalling historical facts we probably first memorized in fourth or fifth grade. The first official Thanksgiving took place at Berkeley on December 4, 1619, and during the Civil War, “Taps” was composed here by General Daniel Butterfield and first played by his bugler, Oliver Willcox Norton.

Next stop is Shirley Plantation, where the Hill-Carter family has lived since 1738. Architecturally a perfect cube, Shirley boasts Virginia’s only intact flying staircase from the period, and is embraced by other structures that surround the forecourt, including the smokehouse, two-story kitchen, stables, and dovecote.

We refuel with lunch at Upper Shirley Vineyards. If the names Tayloe Dameron and Carlisle Bannister don’t sound like a dynamic duo of Southernness, what does? Tayloe, who owns Upper Shirley with his wife, Suzy, has teamed up with Richmond chef Carlisle to create the on-site restaurant, a new culinary destination in the area. Soft-shell crab, homemade pimento cheese, and a perfectly chilled house rosé reinvigorate us for the afternoon.

We ramble down a long, tree-lined road to Westover Plantation, where we marvel at the detailed plasterwork, intricate mantels, and secret passages. As we pause to look across the river toward a bald eagle reserve, it’s as if time is standing still.

Jane Scott takes the wheel and points toward Greensboro, while I study my shopping list in anticipation of visiting Caroline Faison Antiques.

Caroline is wickedly funny, girlish, and has a keen eye for antiques. She seamlessly blends Italian, French, Swedish, and the random English bit into a salad of style. We’re captivated by her stories, as she tells anecdotes about orphans, royalty, and renegades alike.

A stone’s throw from Caroline Faison is an Aladdin’s cave known as The Pink Door. Once we step inside, we know we’re in for a treat. I tell the owner, Glenn Lavinder, “Glenn, just give me a package of red dots; it’ll be SO much easier this way!” I find a bamboo table, empire sconces, a Venetian mirror, antique toile, and porcelain. Sold.

What North Carolina sojourn would be complete without barbecue? We lunch at Smithfield’s, where servers roam the dining room with sweet iced tea, and beach music has us unconsciously tapping our feet. Their pulled-pork platters with coleslaw and hush puppies would turn anyone into an honorary Southerner, at least for the day. You can buy their North Carolina–style sauces (vinegar based), too. They’re the real deal.

Jane Scott and I both throw our share of dinner parties and have roving eyes for china, so we experience the magnetic pull of Replacements. It’s Sunday and the warehouse is closed, but the shop is packed with a staggering amount of silver, crystal, and china, both new and vintage. I look at chafing dishes, but then get sidetracked by all the bounty and find a silver pitcher, biscuit barrel, and little ramekins in sterling holders that will be perfect for melted butter with lobster. Spontaneity and serendipity—the twin gods of shopping—are surely watching over us.

While there are no kids fighting in the backseat on this road trip, we still stop at The Greensboro Children’s Museum to tour their edible schoolyard (the only one at a children’s museum in the US) and teaching kitchen, where perhaps the next James Beard or Alice Waters is being mentored.

The five-hour leg from Greensboro to Blackberry Farm is filled with conversation about raising children, future vacations, and managing life and work. Jane Scott remarks, “There are so many things we have to discuss—we should be driving to Alaska!” Maybe another time.

When we arrive, we hop into our next mode of transport—a golf cart—for a whisk around this beautiful property nestled in the Smoky Mountains. At sunrise the next morning, we’re back in the golf cart, leisurely surveying the grounds and simply enjoying the peacefulness and the morning chorus of birds.

After a cooking lesson with David Rule, Blackberry’s artisan butcher, we meet Kreis Beall and Samantha Bradford for dinner at The Barn. It was Kreis who spotted this beautiful farm in the ’70s and transformed it into a luxury hotel. She continues to serve as the director of design, and Samantha is part of that team.

On our last morning here, we put on our exercise clothes and take off on a hike around the farm to stretch our legs before driving to the next stop. In the woods and along the water, the creek beds are a cache of wildflowers. I have a flower press in the car, so I pick a few to press for my next scrapbook. We circle back to the pond and jump into a canoe for an early morning cruise, a thin layer of fog still lifting like a haze of smoke.

Time to get on the road again toward Asheville, with a stop along the way at East Fork Pottery in Marshall, North Carolina. We tour the studio and watch owner Alex Matisse—a craftsman extraordinaire—at work at the kiln.

We arrive in Asheville just in time for dinner at Cúrate. Chef-owner Katie Button sits down at the table for a chat, checking to see how I like my first taste of grilled octopus. It’s unexpected and heavenly, and before Jane Scott and I can say, “We can’t eat another bite,” Katie sends a few more of her favorite dishes to the table. Needless to say, the meal is brilliant.

We plan to spend the day at the Biltmore. It’s as if a European castle—all 178,000 square feet of it on 8,000 acres—has landed in the hills of North Carolina. The genius of architect Richard Morris Hunt and landscape designer Frederick Law Olmsted are on full display, including their life-size portraits painted by John Singer Sargent that were commissioned by the house’s patron and owner, George Vanderbilt. We’re a bit early in the season to see the gardens in full flower, but the white Japanese wisteria is perfection; the bearded irises, abundant; and the clematis is beginning to wend its way through the trellis.

We take off for Charleston, a place we both have visited a number of times, but this trip is for new experiences. At Middleton Place, our private tour guide takes us through the house and gardens, and what could be a more genteel way to set the stage for our time in this beautiful and historic city than Spanish moss lazily swaying in the breeze?

In the next 48 hours, we pack in a book signing on King Street at Croghan’s Jewel Box (which, as we expected, is a true gem), a visit to Ann Long Fine Art, along with good food, tours, and visits with craftsmen.

On our last evening of the trip, Susan Hull Walker hosts a beautiful dinner for us in her garden. As she owns Ibu Movement, a woven-textile company, it’s no surprise that caftans are de rigueur at her party, and that the setting and the conversation are equally divine. We raise a final toast to our grand adventure and thus begin scheming the next one.

Scenes from the Charleston Dinner Party 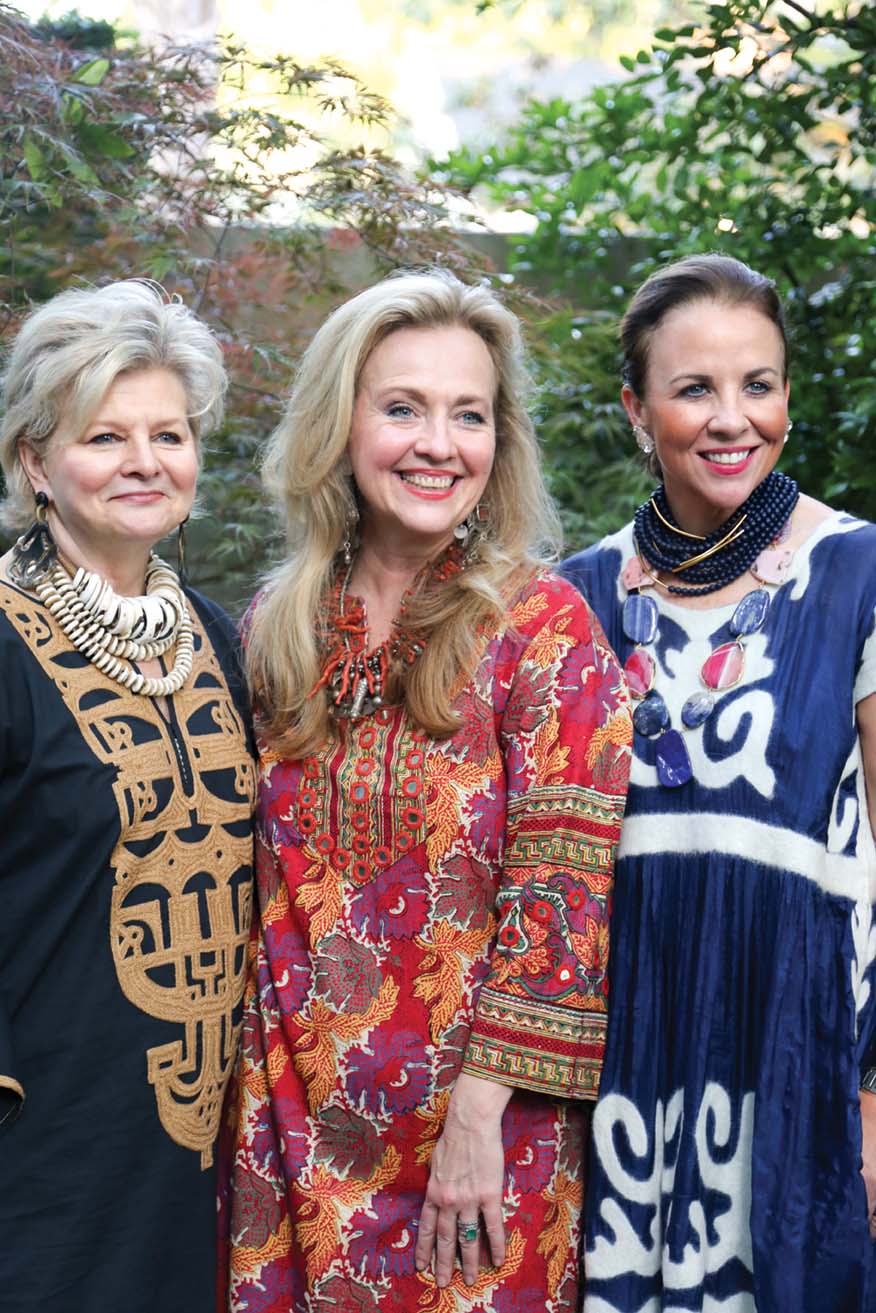 Dinner in the garden with Susan Hull Walker (center) 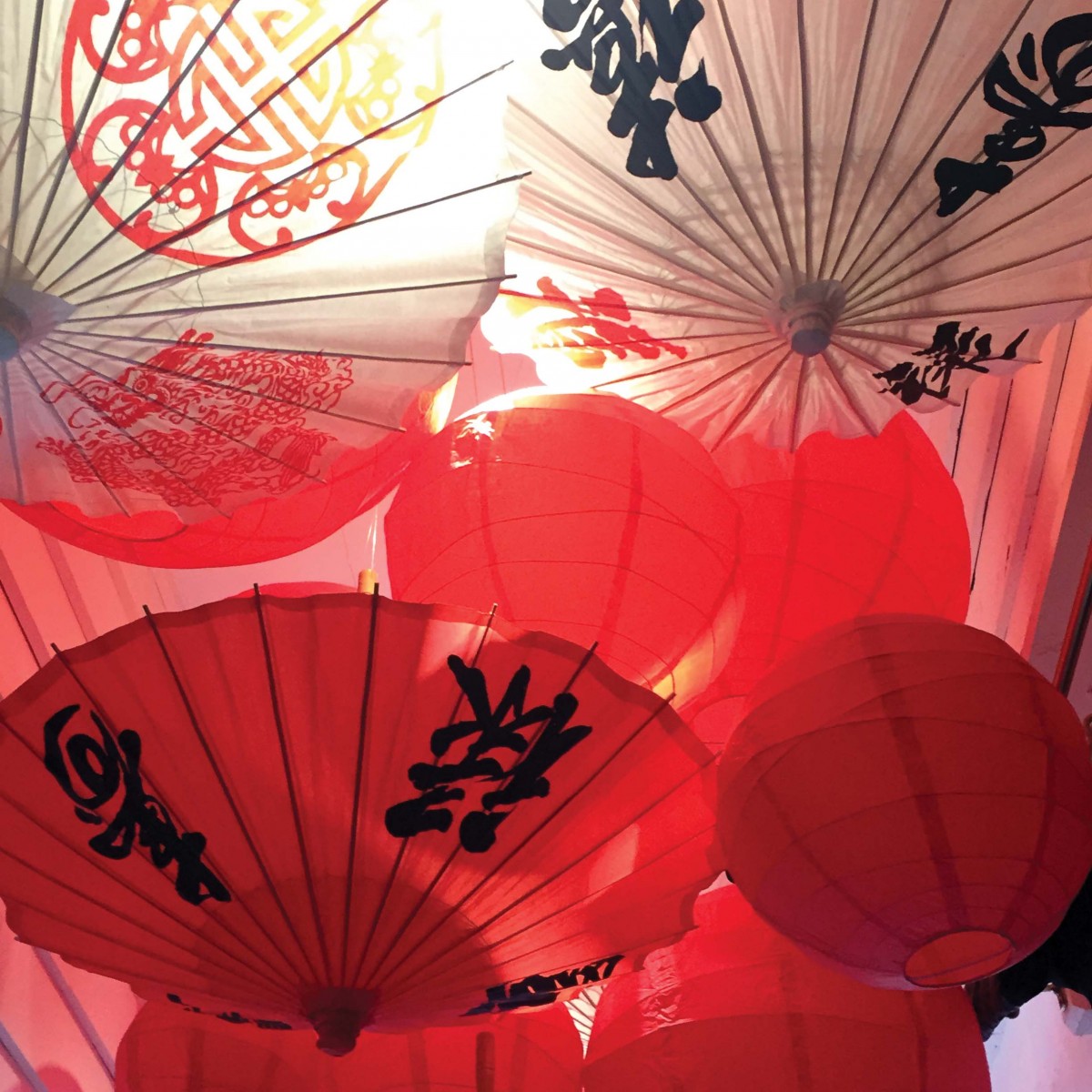 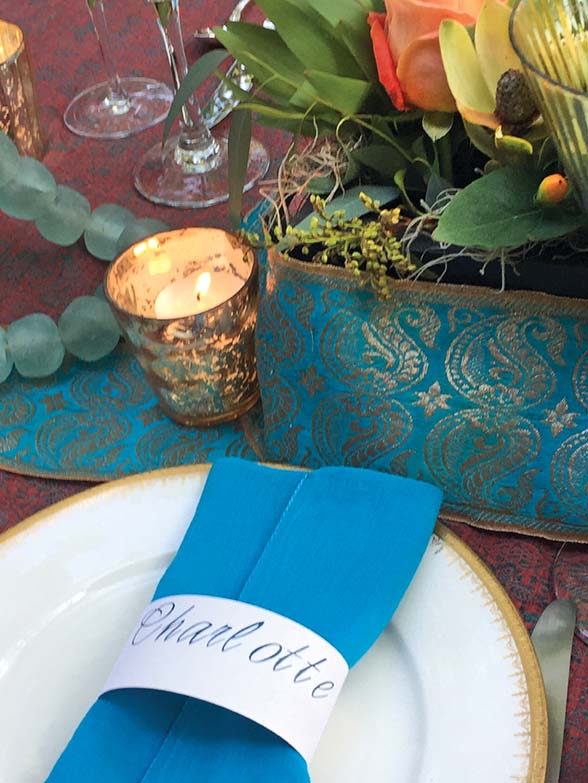 Story and Photography by Charlotte Moss