When a garden is built on hopes and dreams, there are no limits. Explore the rose-bowered arbors, evergreens, and chorus of annuals and perennials of a 3-acre Connecticut paradise

The sun takes its time climbing above the conifers that join limbs to enclose Plantsville Pines. But even before the sparkle illuminates a labyrinth of blossoms lapping at walkways and arbors plumped with vines, this garden has a surreal quality. Hidden in a no-nonsense industrial Connecticut town, this is the landscape that happened when two dedicated gardeners dug in and built from their heart on a shoestring. Never for a moment did George Anthony Jones and Dean Delgiudice doubt that making their own paradise was possible, and it shows.

Jones and Delgiudice are driven by dreams and propelled by a mutual thirst for beauty. Not incidentally, they both have a strict work ethic. Even when Jones was working full time in computer technology and Delgiudice in teaching, they always dove into the gardens when home. The 3 acres of land given to the couple by Delgiudice’s family were deeply appreciated, so the couple plunged headlong into making it home in 2002 and have never paused with their dizzying agenda of projects.

While personally building the house (Jones earned his chops from his contractor father), they laid the frame-work for the landscape and tucked in the first plants. To say that they planted the garden doesn’t really capture the depth of the initiative. The pair propagated the plants from seeds and cuttings to layer in the lushness they envisioned. But this isn’t about blood, sweat, and tears. This is the saga of love, sweat, and no fear.

(Find out how Jones extends the blooming season at Plantsville Pines.)

The fact that Jones gleans his ideas from reading books is telling because his tastes are purely European. His vision was a series of cottage gardens joined by seductive rose-entwined arches that feel both mazelike and secret garden–esque. Plantsville Pines welcomes visitors with an entry drive accompanied by a sweep of flowers that run like rivulets in colors that proclaim summer but are simultaneously soothing. Even before they were given the land, Jones always saw in his future a parterre with flowers hemmed by clipped boxwood. He made all that happen and more.

It took considerable savvy. Although many gardeners look back on missed opportunities and sigh, Jones and Delgiudice took smart advantage when options presented themselves. For starters, when the heavy equipment had just finished digging the foundation for their house and earth movers were still on the premises, they asked if the machines could dig holes for 300 pines to surround their land. As a result, they had the parameters laid out for their landscape in no time. Now, the mature pines stand tall and broad as the optical illusion that establishes the sense of slipping into another reality.

Simultaneously, Jones was tucking in plants salvaged from his previous garden. Although a couple of years had intervened while the couple was in limbo between homes, Jones had spread plants among friends to transplant to their new home.

The initial garden was a rather loud shout-out to the joy of independence and was also a testimony to what could be rallied quickly. “The driveway border was all purple and yellow,” Jones recalls of his original somewhat garish fillers. His vision was a big wave of massed color, but it was initially dependent on whatever he could germinate from seed in a blink. The result was 400 echinaceas and rudbeckias greeting friends when they first drove in.

Meanwhile, he had purchased 400 tiny boxwood starters at Home Depot to put in his parterre while frantically rooting cuttings to increase that quantity. The first flowers to fill in between the boxwoods in the parterre were white marigolds—another plant Jones could easily produce rapidly from seed.

Time and resources allowed the couple to hone their style. They found fountains and hoops to form arbors inexpensively but pulled them apart and rebuilt them to suit their taste. In place of the marigolds, perennial drought- and pest-resistant sedum ‘Matrona’ now fills in the parterre between boxwoods. Added elements tame the borders, though repetition remains their strong suit. Now, foxgloves, salvias, Shasta daisies, lilies, daylilies, and balloon flowers knit them together with spiraea to form a leitmotif. But the main show occurs when the sweet Williams burst into midseason blossom. Propagated by seeds collected from Jones’s mother’s garden, they are a meticulously selected combination of colors that merge beautifully in concert. Every year, Jones plants new seeds just in case his biennials fizzle.

“To prevent the garden from reading like a free-for-all, it’s tied together with repeating patterns and colors.” — George Anthony Jones

Everything about this garden is magic. From the arbors bowered in heirloom roses propagated by Delgiudice to walkways where silene, ageratum, and other self-seeders instill a sense of endless lushness, this is a place where you sink deep into every step. There would be a grandeur about the garden, but the couple is so down-to-earth, it just dazzles rather than daunts. Now, Plantsville Pines is the epitome of everyone’s dreams.

When most gardens are in a lull, that’s when Plantsville Pines steps into prime time. Although spring has its charms, the gardens reach their zenith in July. Jones’s affinity for the sweet William that his mother once grew as a cut flower is part of the wave steering that time slot. He became so fond of that midseason performer that he still starts seeds every year to add to the bounty already planted.

Coinciding with the rush of sweet William are daylilies, ageratum, and annual rudbeckias. Other annuals raised from seed also join in the chorus, as well as salvias such as ‘Wendy’s Wish’ and ‘Amistad’ that were purchased as small plants. Cuttings of plectranthus fill in the beds. The fact that climbing roses enter the picture later than bush types also plays to the scene’s favor.

But Jones’s goal has been to prolong the show even further, and he does that with echinaceas, daisies, sedums, and the silene that self-sows everywhere to lend the garden its rambunctious mood. Hydrangeas line the walkways. And after the roses finish their performance, the intertwined autumn clematis has its day. “It’s a bear to wrestle the clematis from the roses in spring,” warns Delgiudice who painfully prunes the clematis to 4 feet, “but it’s worth it.”

Containers filled with succulents also fill in and punctuate the scene. With planning, the display is sustained robustly until autumn. Beyond that, thanks to the conifers, this landscape is evocative throughout the year. 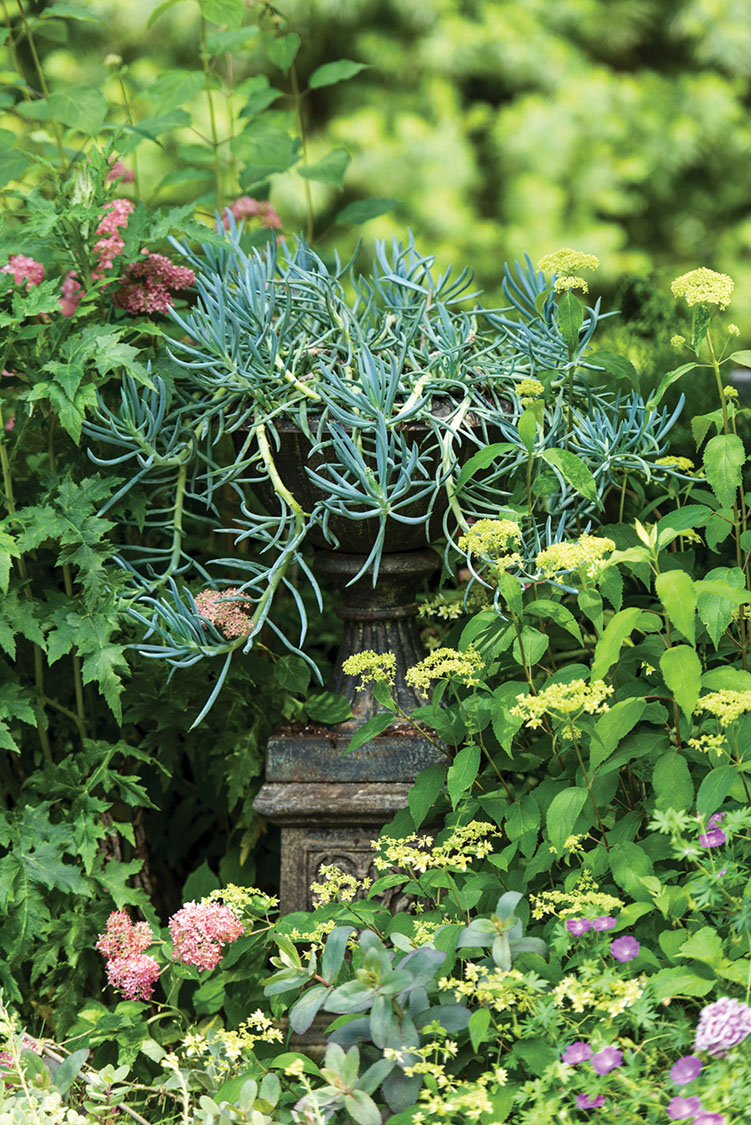 Potted plants filled with low-maintenance succulents like senecio accent the sunken garden and weave into the scene. 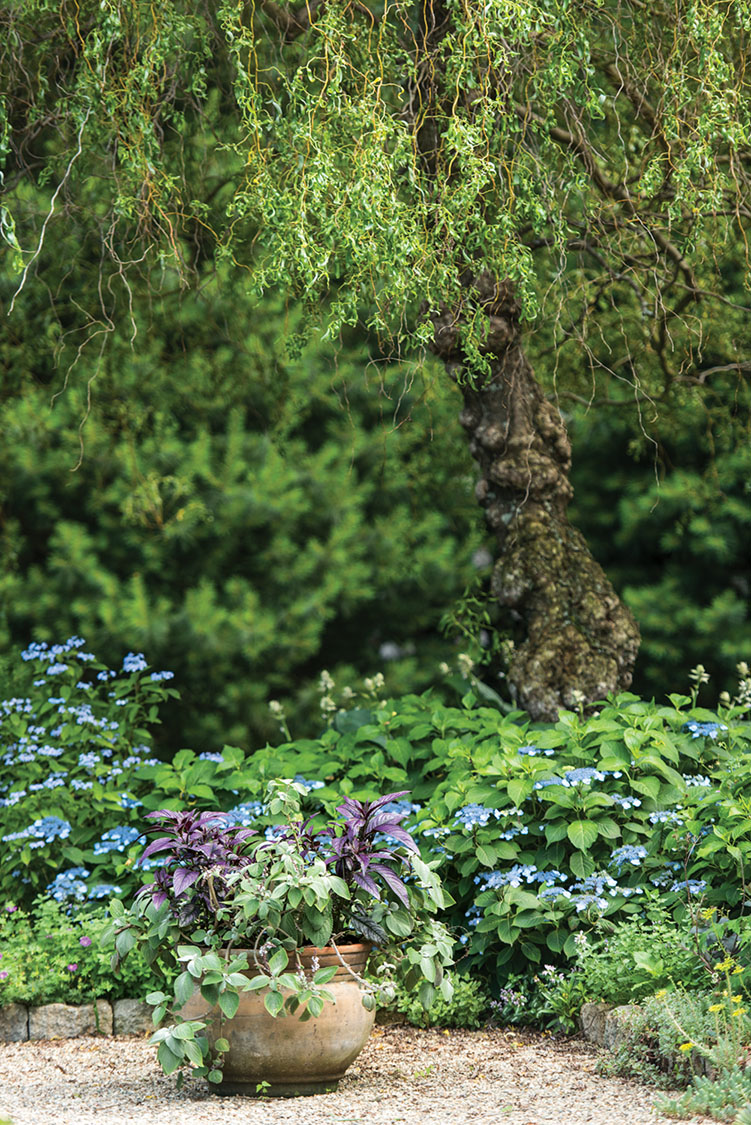 An urn dense with plectranthus and Persian shield completes the corner, playing off a bed of ‘Blue Billow’ hydrangea. 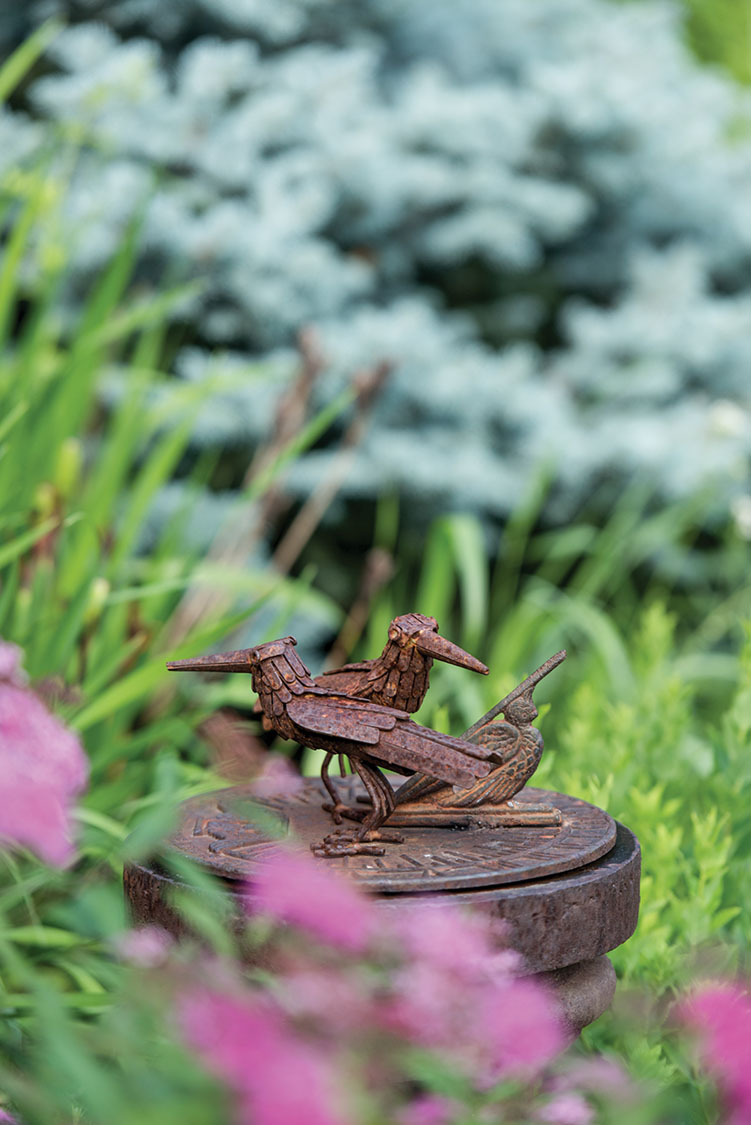 Jones “combined all the rust” to perch whimsical bird sculptures on top of a weathered sundial. 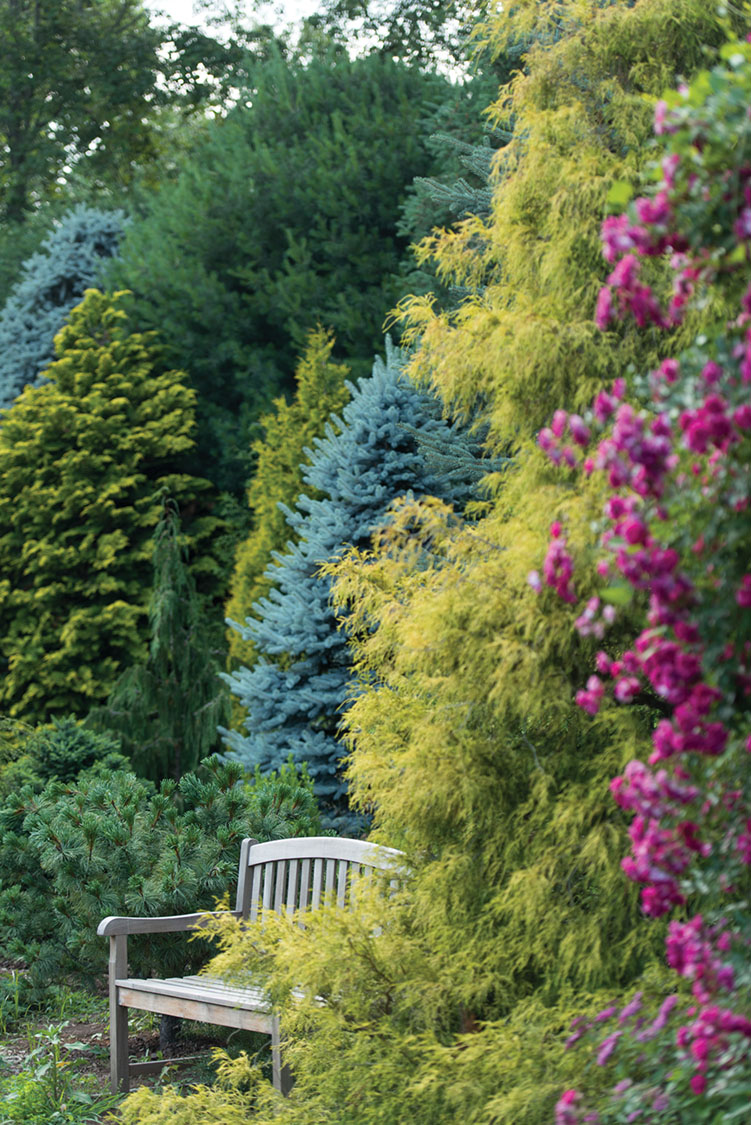 Spruce, chamaecyparis, and arborvitae serve as a backdrop for the gardens.