With a lot of study and careful selection of plants, landscape architect Jamie Purinton designed a sweeping Hudson Valley landscape that looks as if it’s always belonged

Dan Sternberg was struggling to explain what he wanted in a landscape. He had no specific checklist for the garden he was trying to forge; it was more about honoring the surrounding beauty. Standing beside his newly constructed Hudson Valley home four years ago, he attempted to convey his vision to landscape architect Jamie Purinton during their initial meeting.

“We want the house to look like it was just dropped into this space,” he began, finishing with, “and I don’t want to own a lawn mower.” That’s when Purinton enveloped Sternberg in a huge embrace. That hug was the start of a collaboration that began in 2015 and has gained fervor ever since.

Sternberg and his wife, Debbie Cooper, originally saw the For Sale sign at the foot of Star Hill while cycling in the area but stalled for a year before purchasing the 18-acre largely abandoned horse pasture and woodland. They asked architects Demetriades + Walker to design a contemporary house that takes its cues from the agricultural surroundings in a strong, sleek, metal-and-barnboard type of way. Windows overlook the Oblong Valley below, and massive glass doors disappear into wall pockets, erasing the boundaries between inside and out. The scene begged for a landscape suitable for framing.

As they stood in the blank canvas left by the contractors, it didn’t take long for the couple and Purinton to agree that “dropped into this space” ideally meant a meadow. But was it possible? That’s when Purinton disappeared for a long walk around the 18 acres. When she returned, she clutched a handful of asters, penstemon, yarrow, milkweed, rudbeckia, sweet fern, showy goldenrod, and little bluestem already thriving in the hinterlands of the site. Then they knew that a meadow was feasible.

“A meadow softens and grounds a house, knitting together the existing ecosystem with the cultivated domain. When our work joins nature seamlessly, we have succeeded.” — Landscape Architect Jamie Purinton

From that “handheld bouquet,” a mix was eventually formulated based on the local flora embellished with mountain mint, beebalm, and other blossoming and warp-and-woof elements to bolster the beauty.

Of course, it took a lot of research and experimentation while the “ecological matrix” (Purinton’s term for the resulting ecosystem) was being forged. In addition to the couple’s requests for a performance that lingered for the longest possible season of interest, meadow-nesting birds and native pollinators also figured in the final configuration. “This is a habitat,” Purinton says. “And of the utmost importance is making an ecosystem that is sustainable over time. The making of a meadow doesn’t end when you seed it. Actually, that’s just the beginning.”

Today the landscape at Star Hill continues to evolve. Beyond the broadloom usually associated with a meadow, vertical elements were preserved and inserted. Many cedar trees were left intact, as was an original apple orchard. Additionally, groves of sumacs, crabapples, and birches now dot the land. And the seemingly indigenous landscape laps at the foundation of the house just as Sternberg wished.

The meadow was only one facet of what became a tribute to going lawn mower–less and doing it beautifully. Behind the house, a deck steps down into a “lawn” of creeping thyme that bursts into blossom in spring and provides a frothy, ground-hugging blanket throughout the growing season.

To make the transition to the wilder areas, rock ledges that brace the soil as the land rises are draped in creeping thyme, phlox, and the juniper-like ‘Snow Flurry’ aster. In keeping with the “no mow” mission, pathways wandering outward are bedded with walkable creeping thyme. Everything works in concert to make the space appear wonderfully unstudied. By design, it is difficult to discern where the garden ends and nature takes the reins.

Road Map to Growing a Meadow

Although it’s meant to look effortless, a meadow landscape design is a complex balancing act between nature, the site, and a dedicated team (in this case, Stacia and Angel Montenegro of Garden Tenders). Nobody knows that better than landscape architect Jamie Purinton, who has orchestrated many. Each meadow poses its own unique challenges and rewards, but all follow the same basic road map to success:

To respect the ecosystem already in place, the first step is always to meticulously inventory the flora growing on the site with a botanist.

2 | Analyze the soil and habitat types

Before composing a meadow mix, test the pH and evaluate the soil type. Learn as much as possible about the available light, moisture levels, and erosion issues.

Discuss the palette and target height of the meadow. Then craft a mixture of plants that will play well together and provide interest throughout the season.

4 | Monitor the meadow to identify seedlings

Weeds can be a major issue in a young meadow. Learn to identify weeds and remove them as the meadow evolves. Temporary “nurse” plants such as oats and annual rye can serve as space holders while the meadow matu­res. Perennial ground covers, such as hardworking carex and poverty oat grass, also discourage weed growth.

A meadow is meant to change with time. It requires vigilance to sustain its successful evolution. 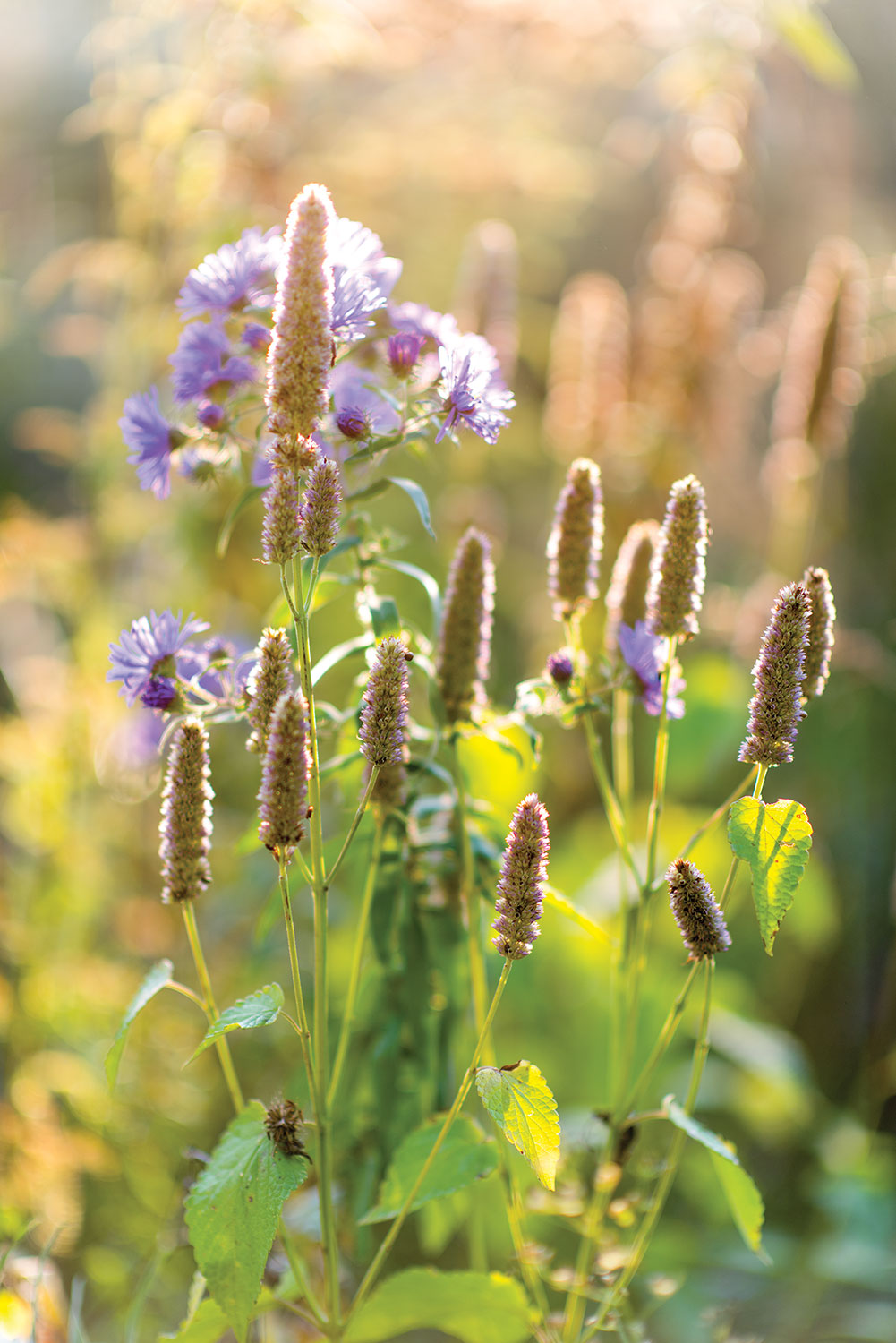 Anise hyssopa is part of this meadow's custom seed mix, designed to provide interest throughout the season. 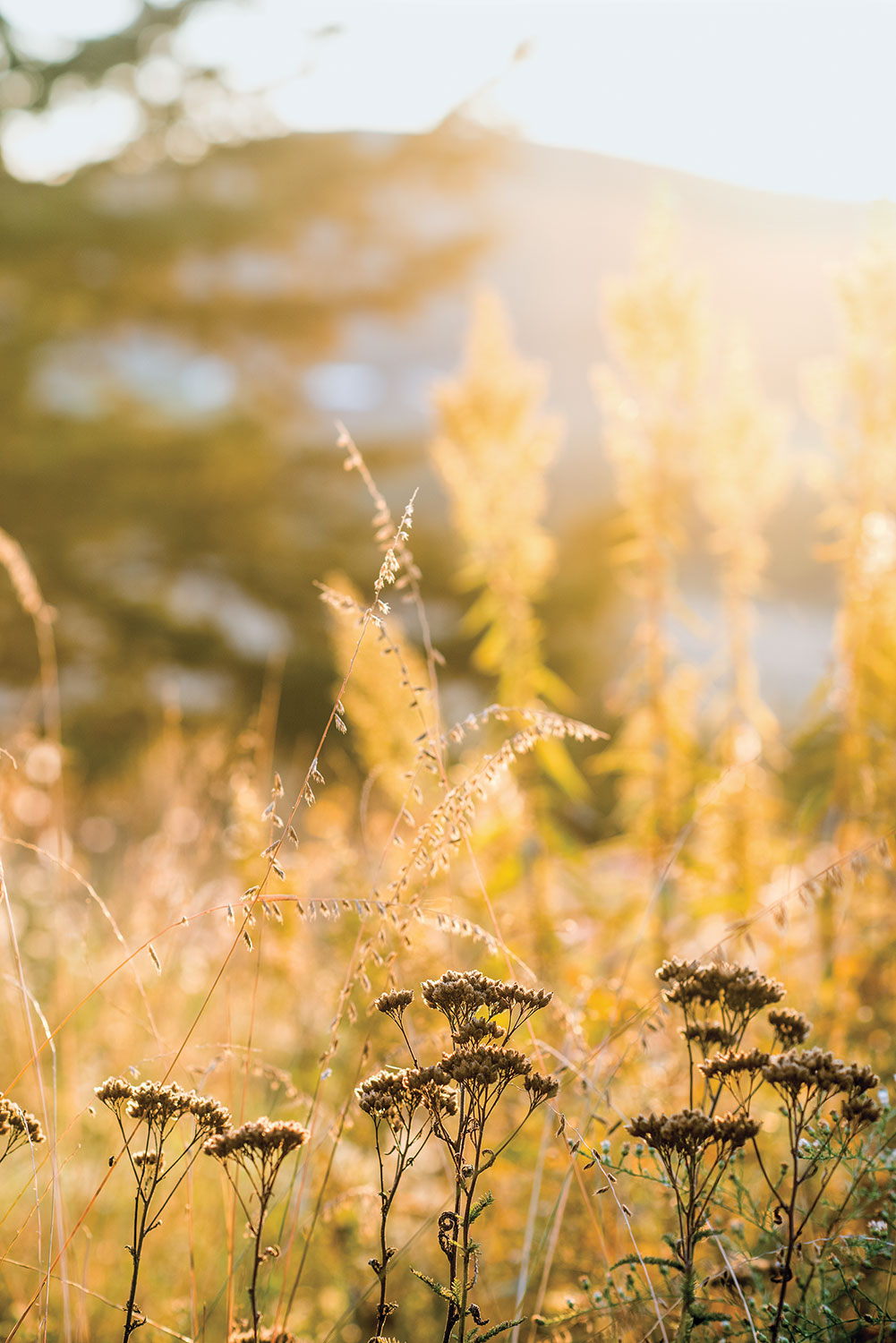 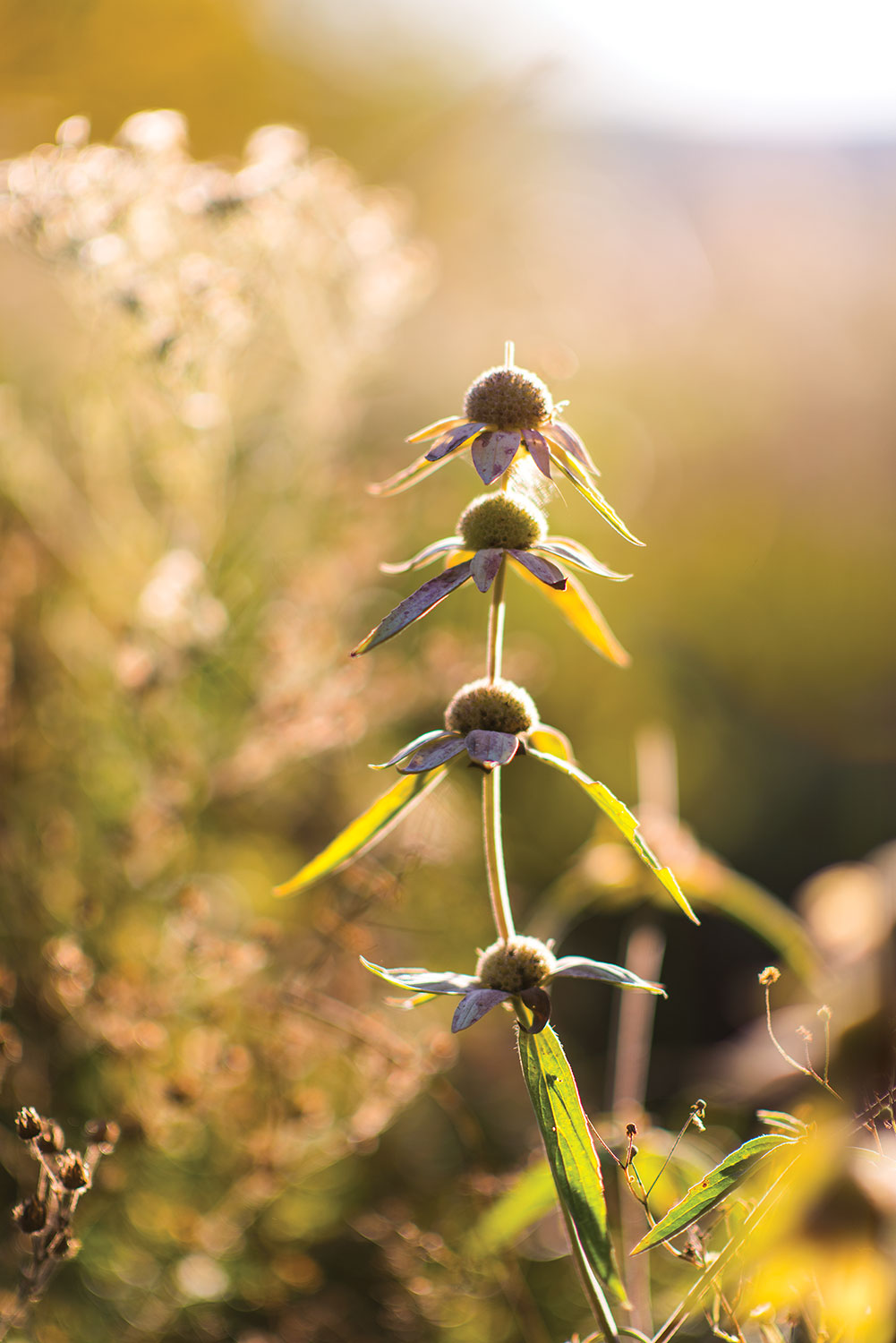 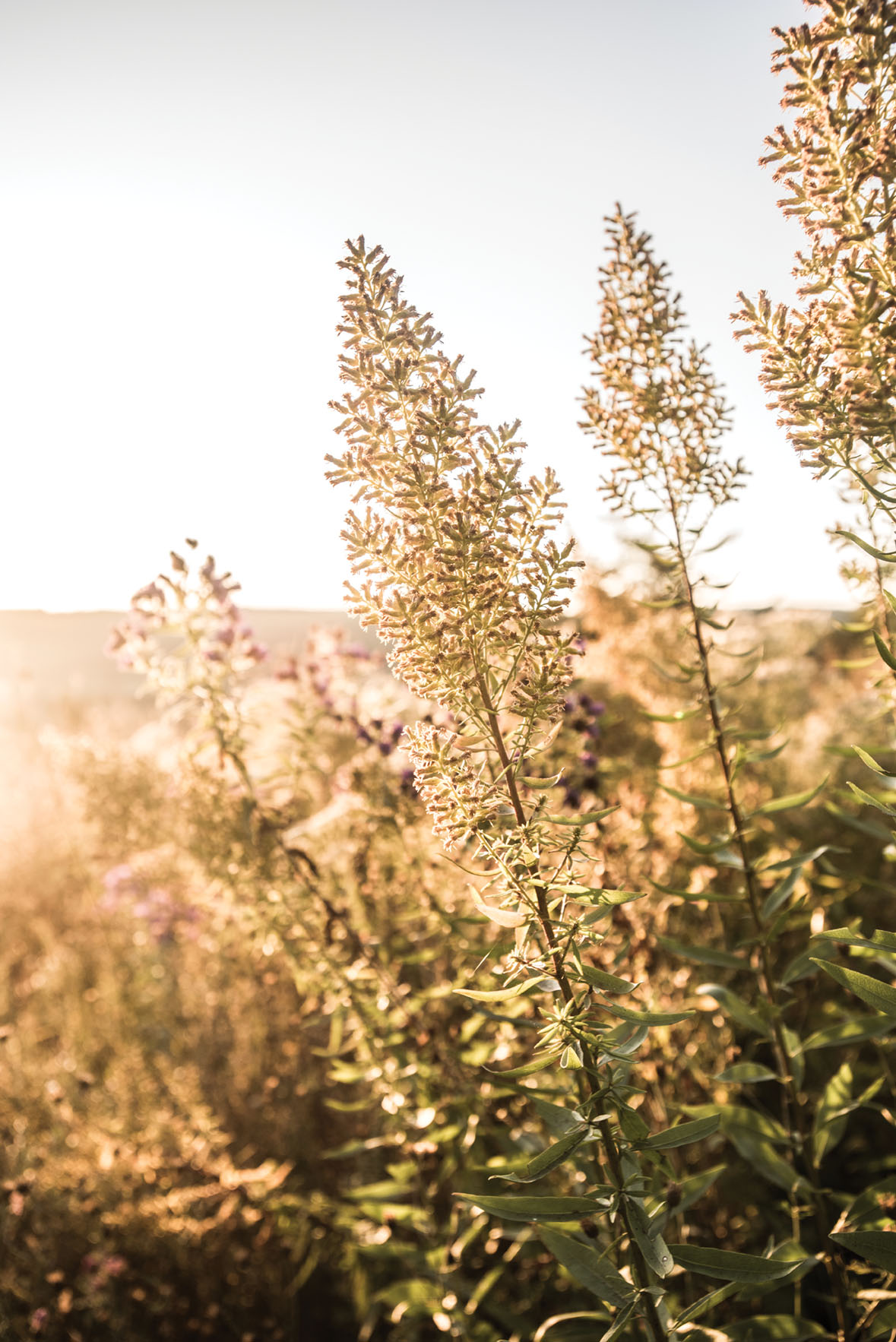 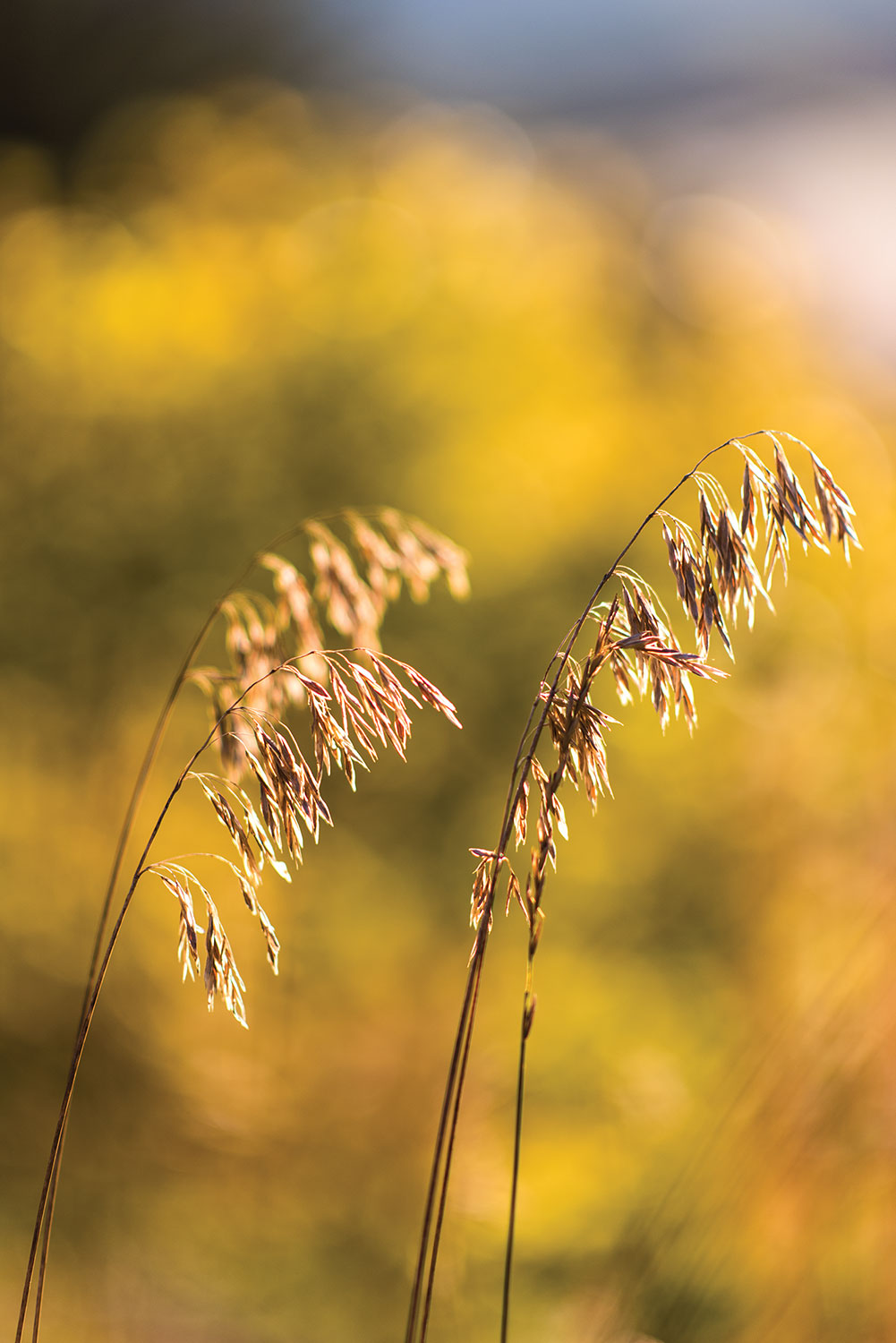 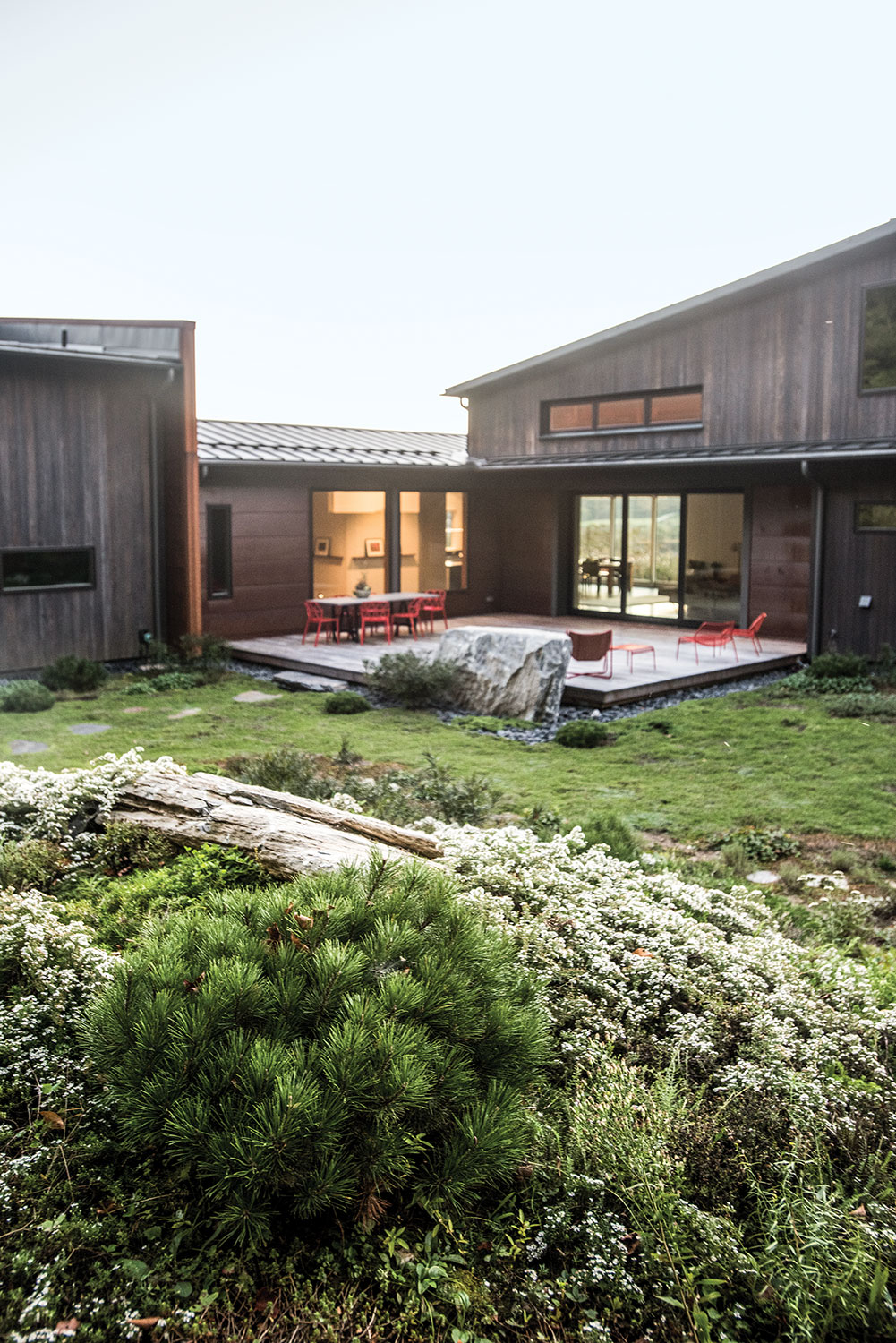 Another view of the thyme courtyard and patio 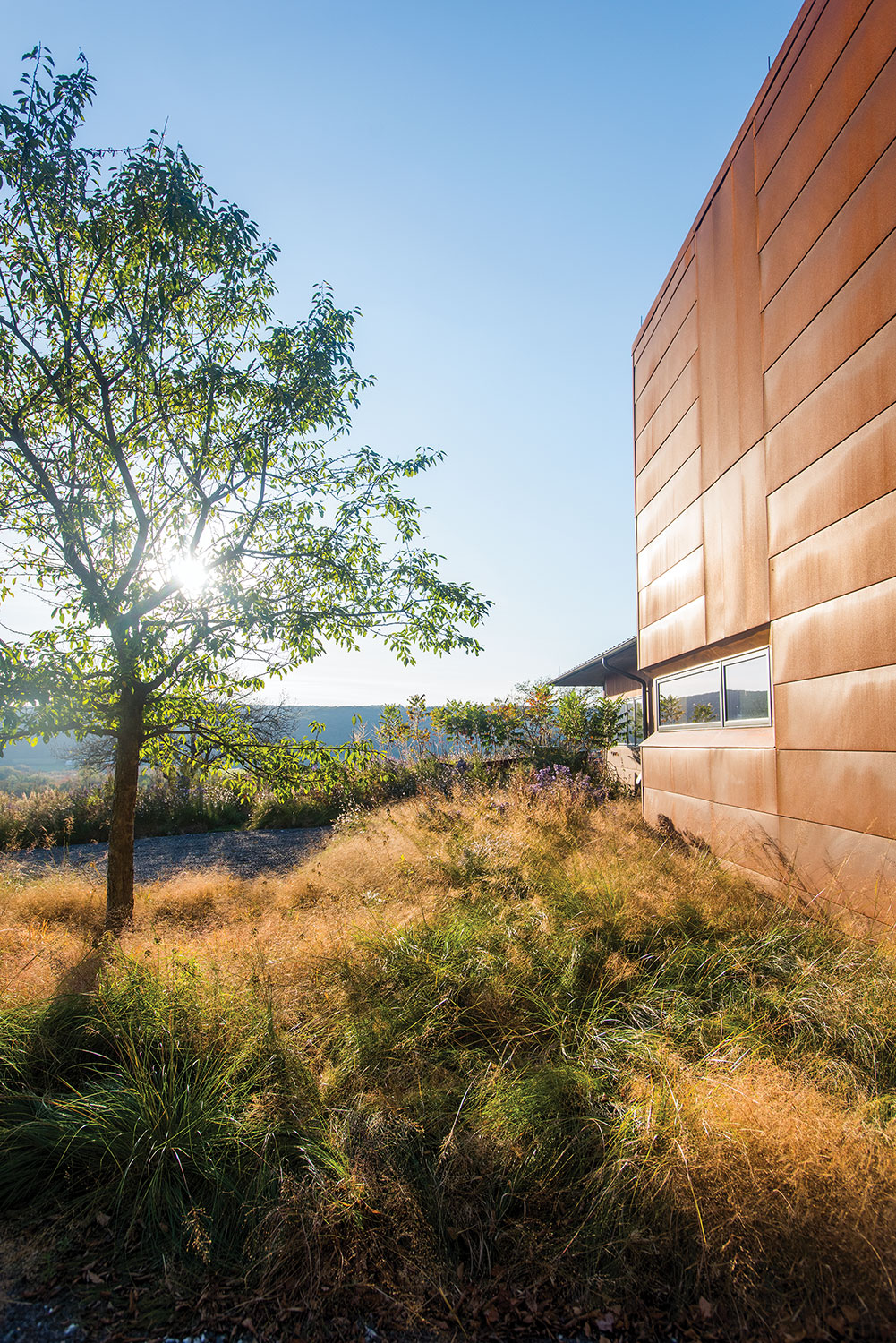 At their initial meeting, the homeowner told Purinton, “We want the house to look like it was just dropped into this space."