Sharon Santoni has found heaven on earth in Normandy, France, but rather than keeping the treasures of the region to herself, she’s on a mission to spread the ambience

Sharon Santoni takes nothing about her home in Normandy for granted. British born and raised, she has never become blasé about the 200-year-old rose-wrapped manor where she lives. Even after 23 years, the evocative morning mist still takes her breath away when she slips out of the rose-bowered doors at dawn to wade through gardens that are rarely nipped by frost or stifled by heat. She’s grateful for the blessed absence of biting insects, allowing dinner to be served alfresco. She also revels in the richness of a region where she can still find carloads of antiques with several centuries of patina and then swing by an incredible rose nursery on the way home.

“The garden is an extension of my home and it’s forever changing. I love walking around the garden and editing. It’s where I can be most creative.” — Sharon Santoni

Sharon and her husband, Eric, plus two toddlers, were renting an early-19th-century orangerie when they decided it was time to purchase a house of their own. After spying the manor house of her dreams, she managed to snag a viewing through a mutual friend of the seller. Two years of persistence ensued before the couple’s offer was finally accepted, which might explain why the proud homeowners now cherish every square foot of their hard-won address.

Of course, the centuries-old house required updating, from the electrical wiring to a kitchen that needed remodeling to suit Eric’s culinary expertise. By the time they moved in, Sharon was about to give birth to their fourth child. Not only were gardens sidelined in favor of parental duties, but the landscape was given over to large stretches of playing field. But even then, Sharon was planning the moment when she could tackle the parterres in earnest. Whenever time allowed, she patiently teased out snowdrops and narcissus that had co-opted the beds, to redistribute them beneath the magnolias. Meanwhile, she had already installed the roses critical to creating the richly romantic mood she desired—voluptuous vines that would climb up the walls to swaddle the house and its outbuildings in nuanced clouds of color.

When the children were grown, Sharon switched gears, finally satisfying all her latent desires to dig into the beds. “It’s my little indulgence,” she admits. Her template falls somewhere between the gardens at Sissinghurst Castle, which she frequented as a child, and a French vintner’s château. She mingles just the right ratio of billowing nepeta, plump alliums, foxglove plumes, irises, columbines, and poppies that frolic in seemingly unstudied “mini meadows” to form the quadrants of parterres. A rose archway creates a hedge and furnishes a sense of mystery, and various trees and shrubs provide definition and shade. Her newest project—an expansion of the no-dig vegetable potager—lies beyond. The homegrown harvest features prominently in feasts when the couple entertains.

The garden’s floral bounty is also reflected in the table settings. “I never buy cut flowers from March until October,” says Sharon, whose signature style is a simple flower or two in old liqueur glasses. “They look so pretty dotted around the table, and I like to echo colors.”

Sharing the lifestyle she adopted was natural for Sharon. It started with a blog, followed by two books, My Stylish French Girlfriends (Gibbs Smith, 2015) and My French Country Home (Gibbs Smith, 2017). When people began asking to come and visit, she started offering lifestyle and shopping tours.

“Before the phone starts ringing in the morning, I slip out the terrace door barefoot, cup of tea in hand, dogs at my feet. The doves are cooing, the cuckoos are shrilling, and I’m carrying my secateurs (pruning shears) to cut flowers from the garden and then head down to the potagé to harvest zucchini. It’s my precious time.” — Sharon Santoni

“We see beautiful things, take classes, and drink a lot of Champagne. Everyone smiles all the time,” she says of the itinerary. In 2019, she launched My French Country Home: The Magazine in both print and digital editions and began offering subscription gift baskets overflowing with the soaps, candles, and various crafts for which France is famed. Now, thanks to Sharon’s bounteous nature, the whole world can experience the wealth she has found through a simple lifestyle lived in a magical place. Proof again that joie de vivre is contagious.

More from the Gardens of Sharon Santoni 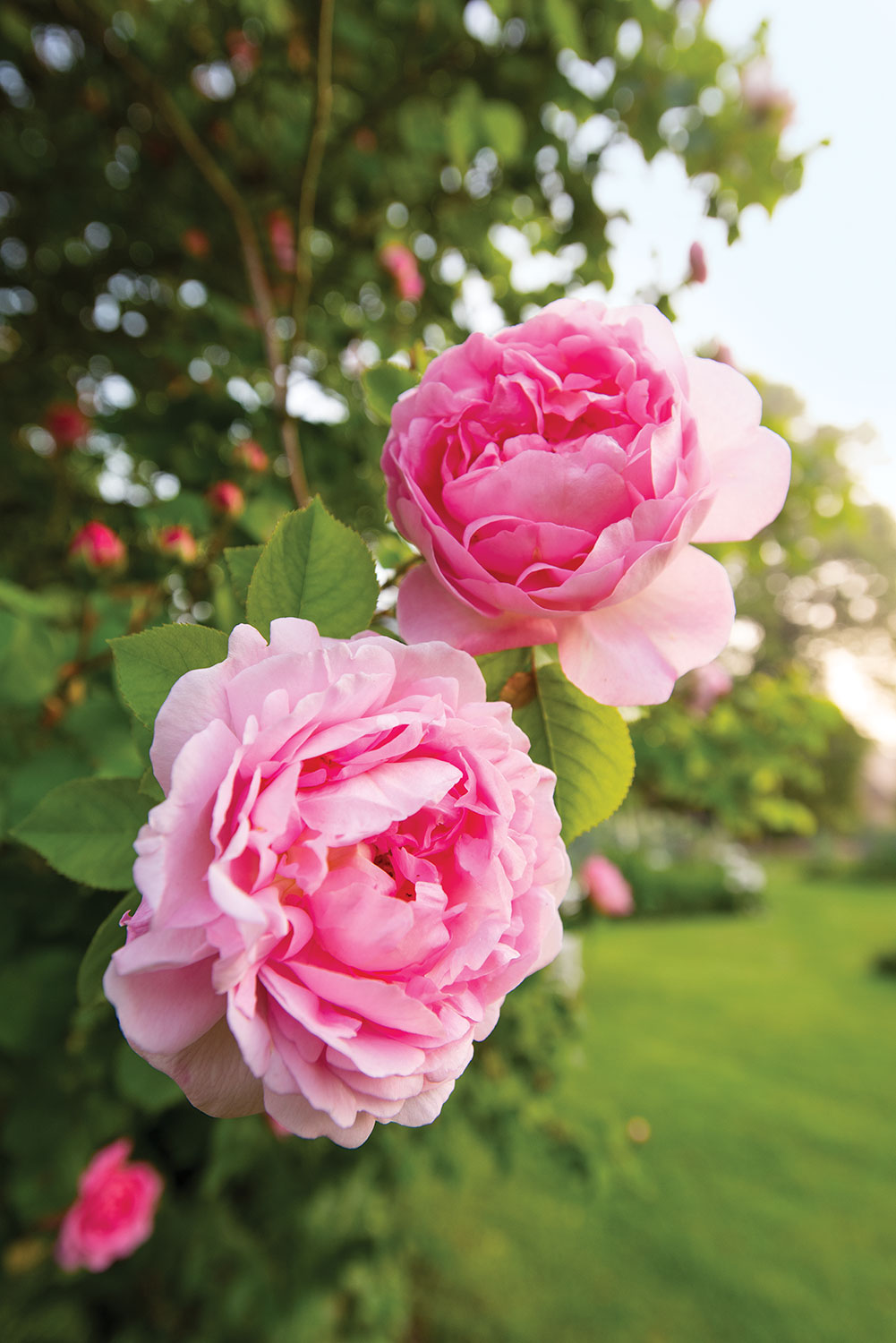 ‘Constance Spry’ rose is “extremely generous,” says Sharon, but does not rebloom. 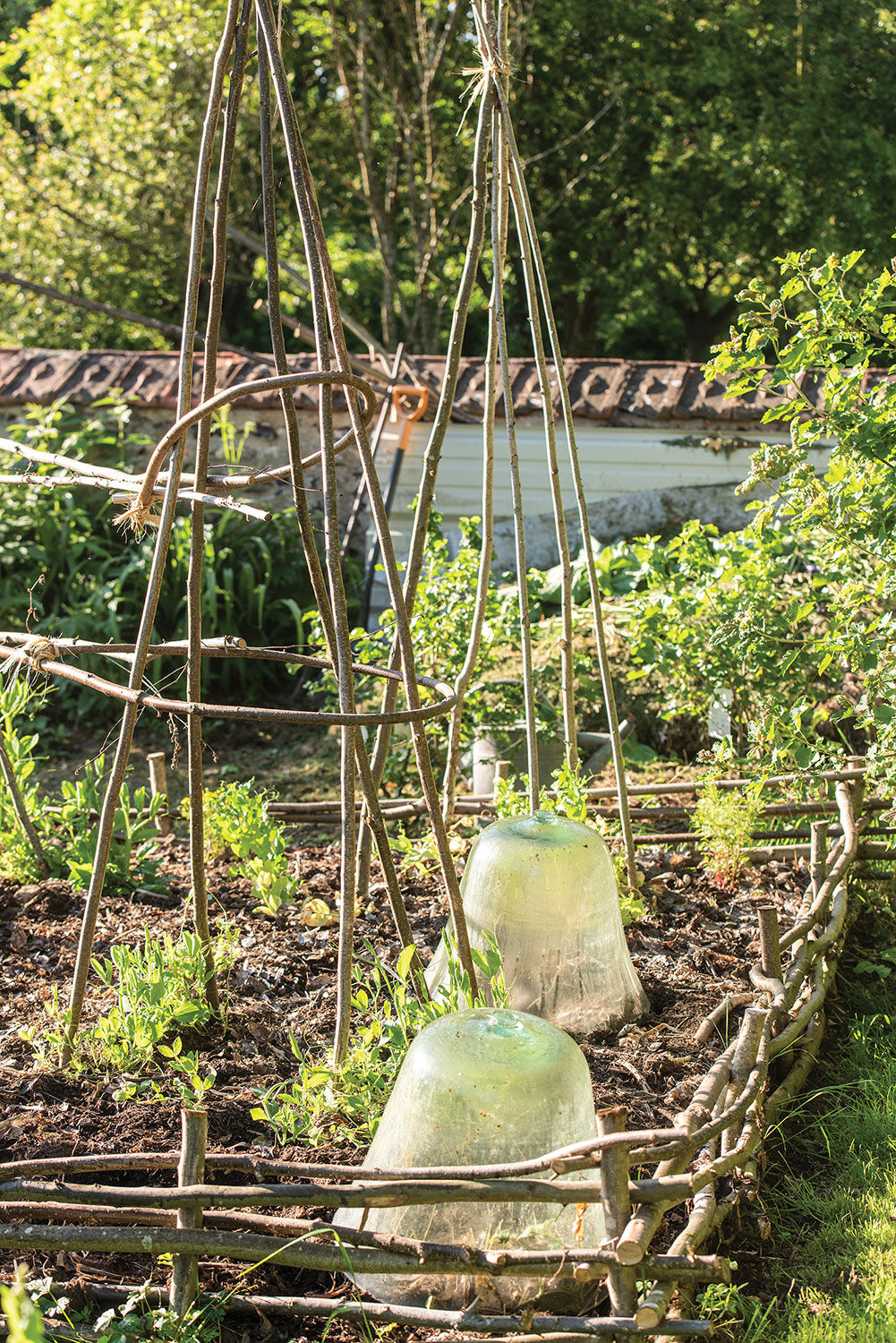 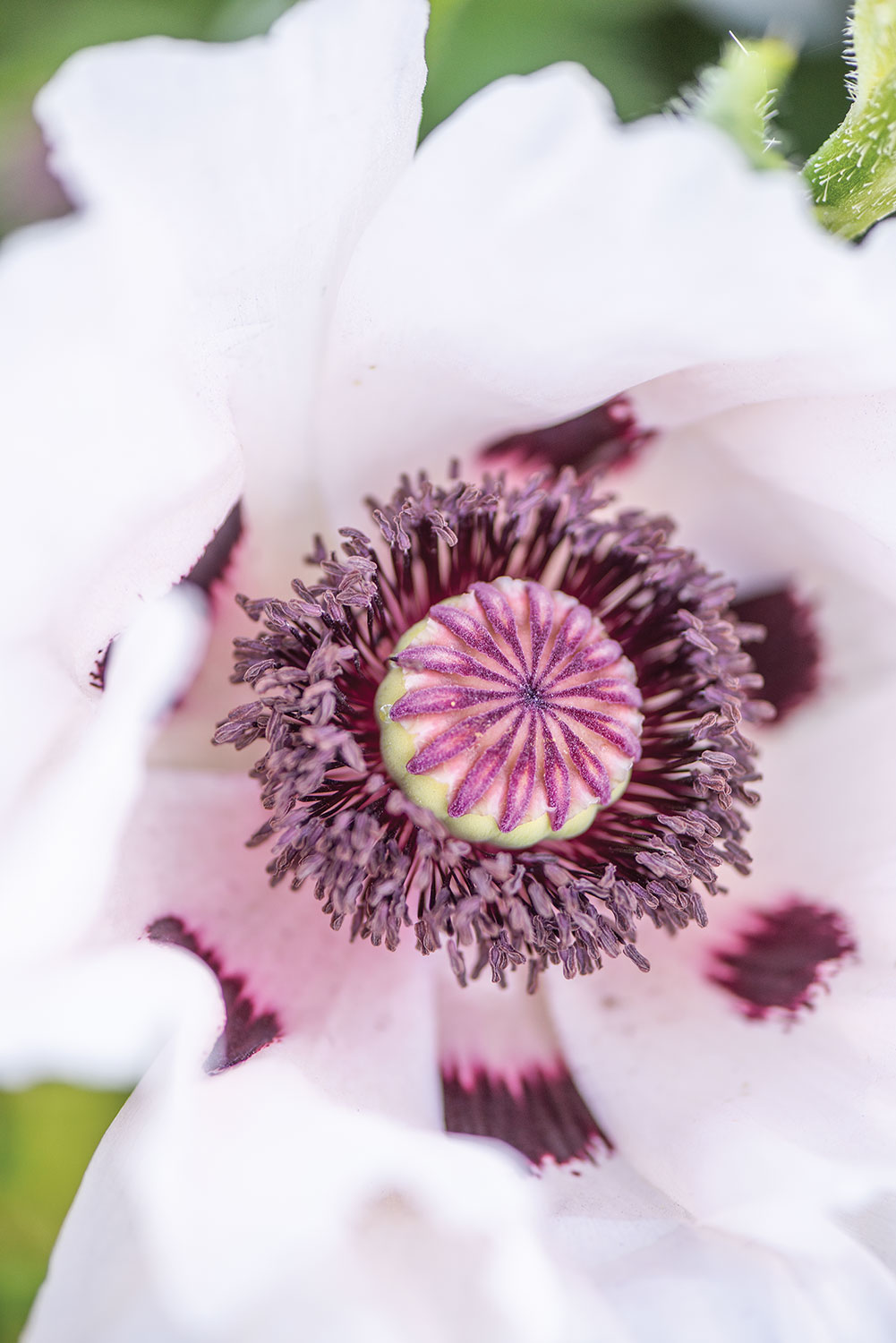 Papaver orientale ‘Perry’s White’ came back to France with Sharon from Britain. 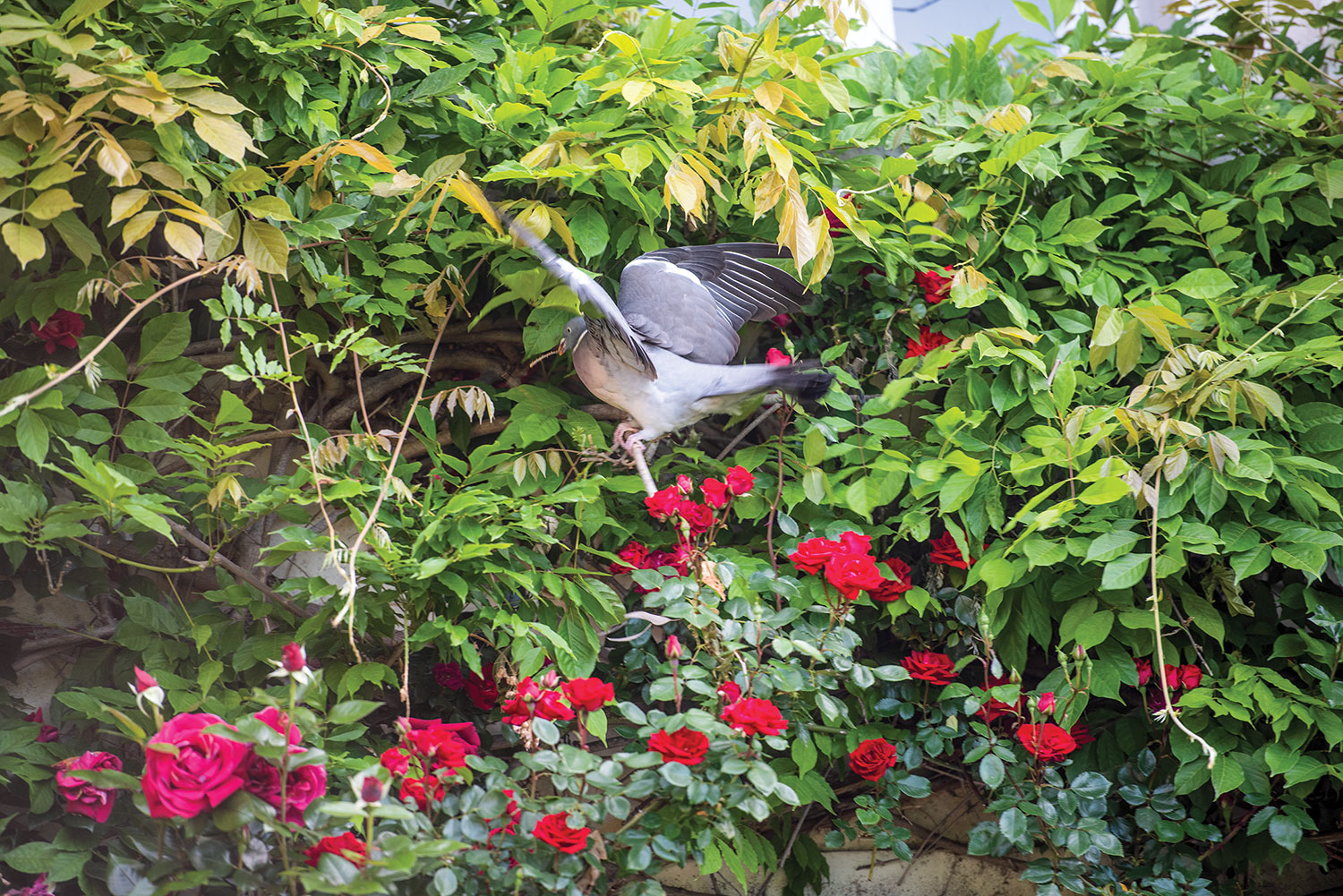 A pigeon chose the wisteria outside her window to build a nest. 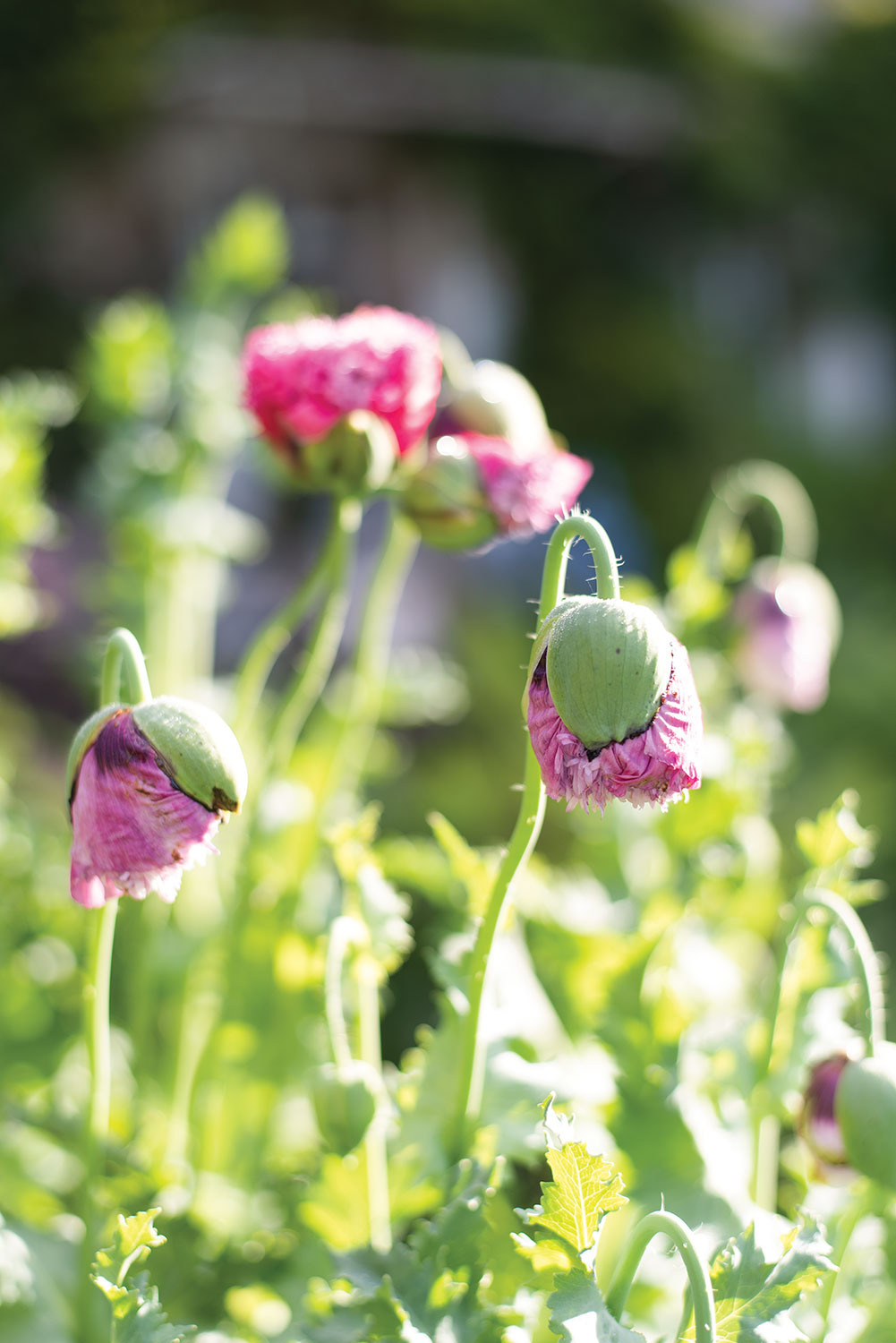 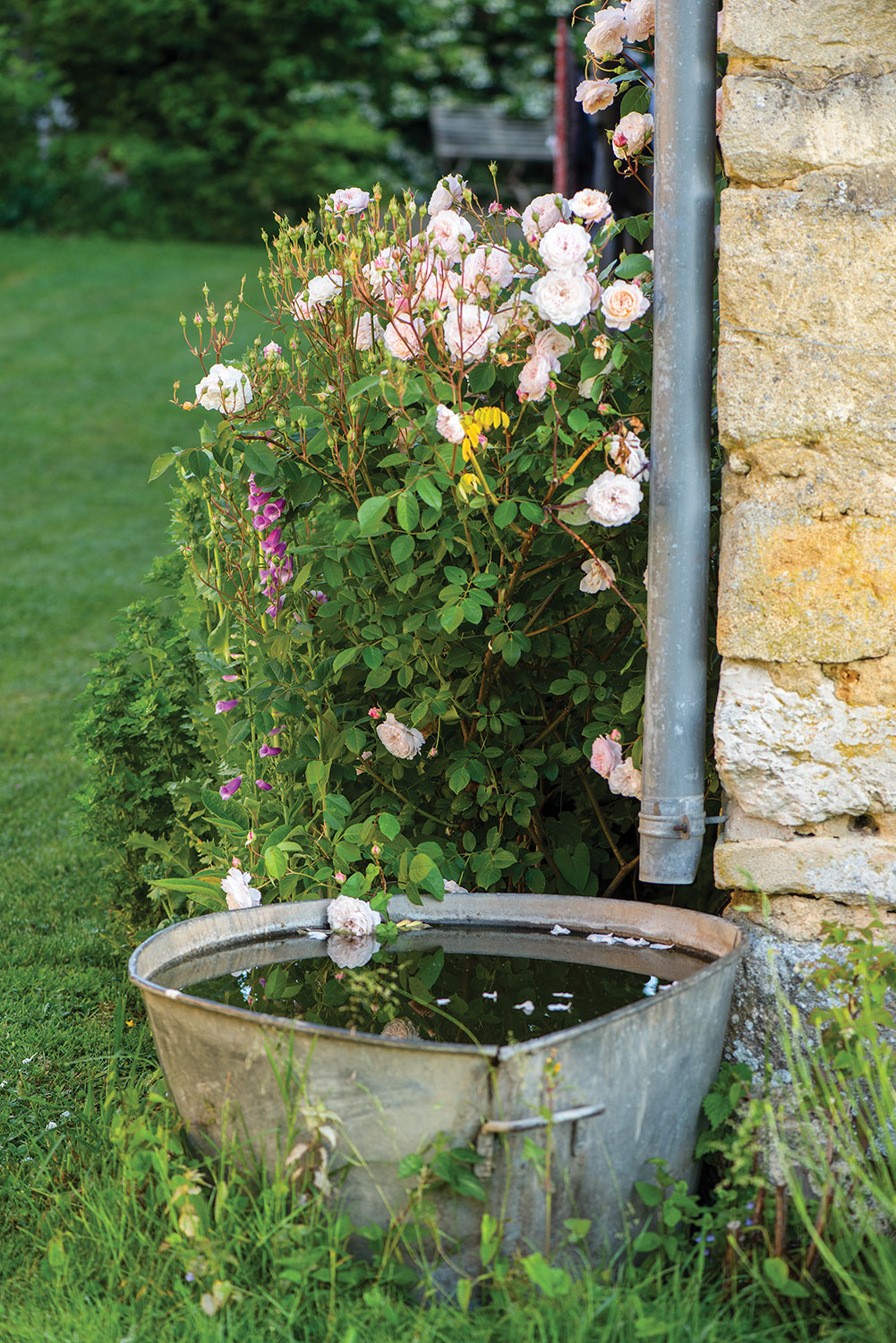 A rain bucket catches water from the roof of the old stone barn. 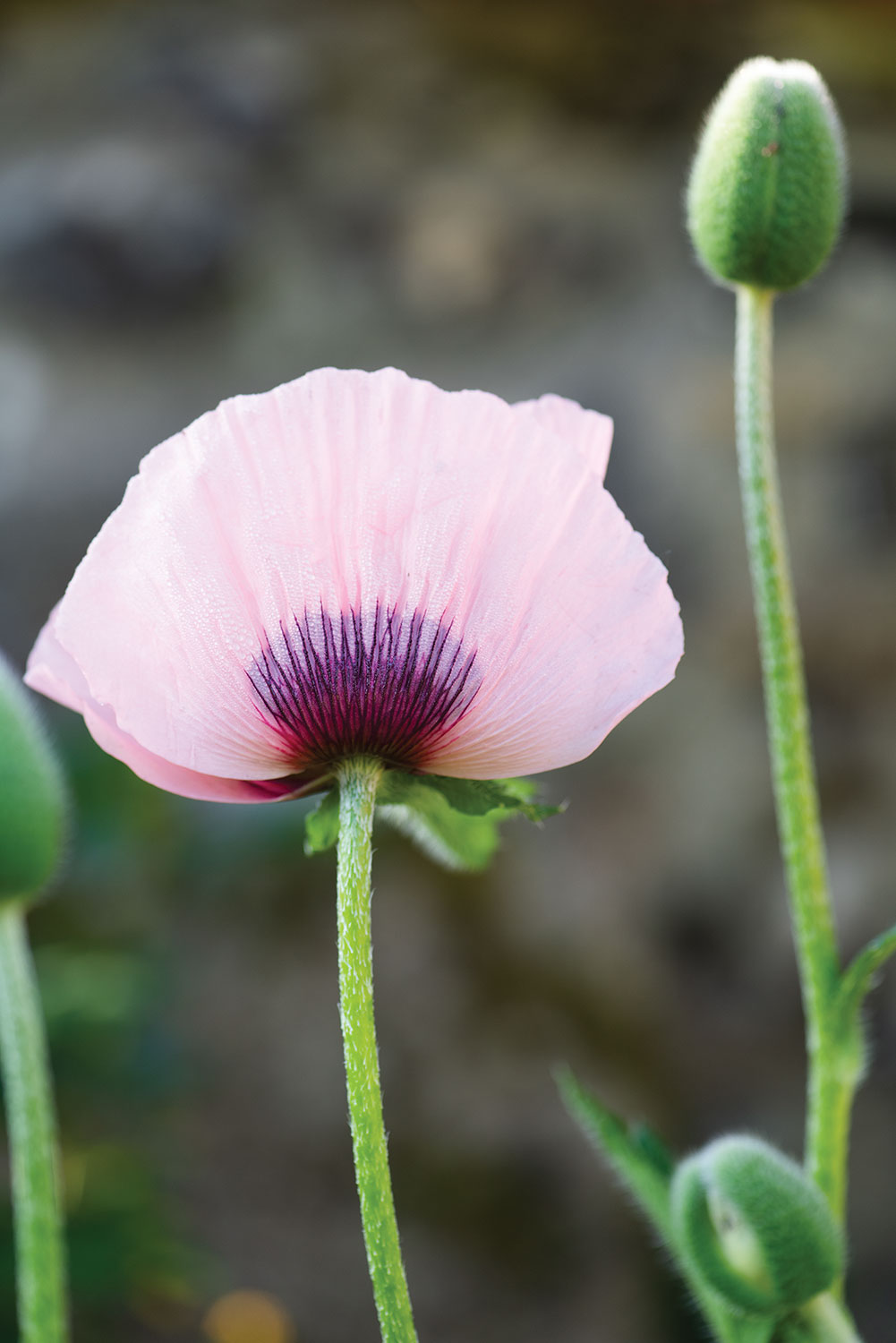 Papaver orientale ‘Helen Elizabeth’ is about to bloom. 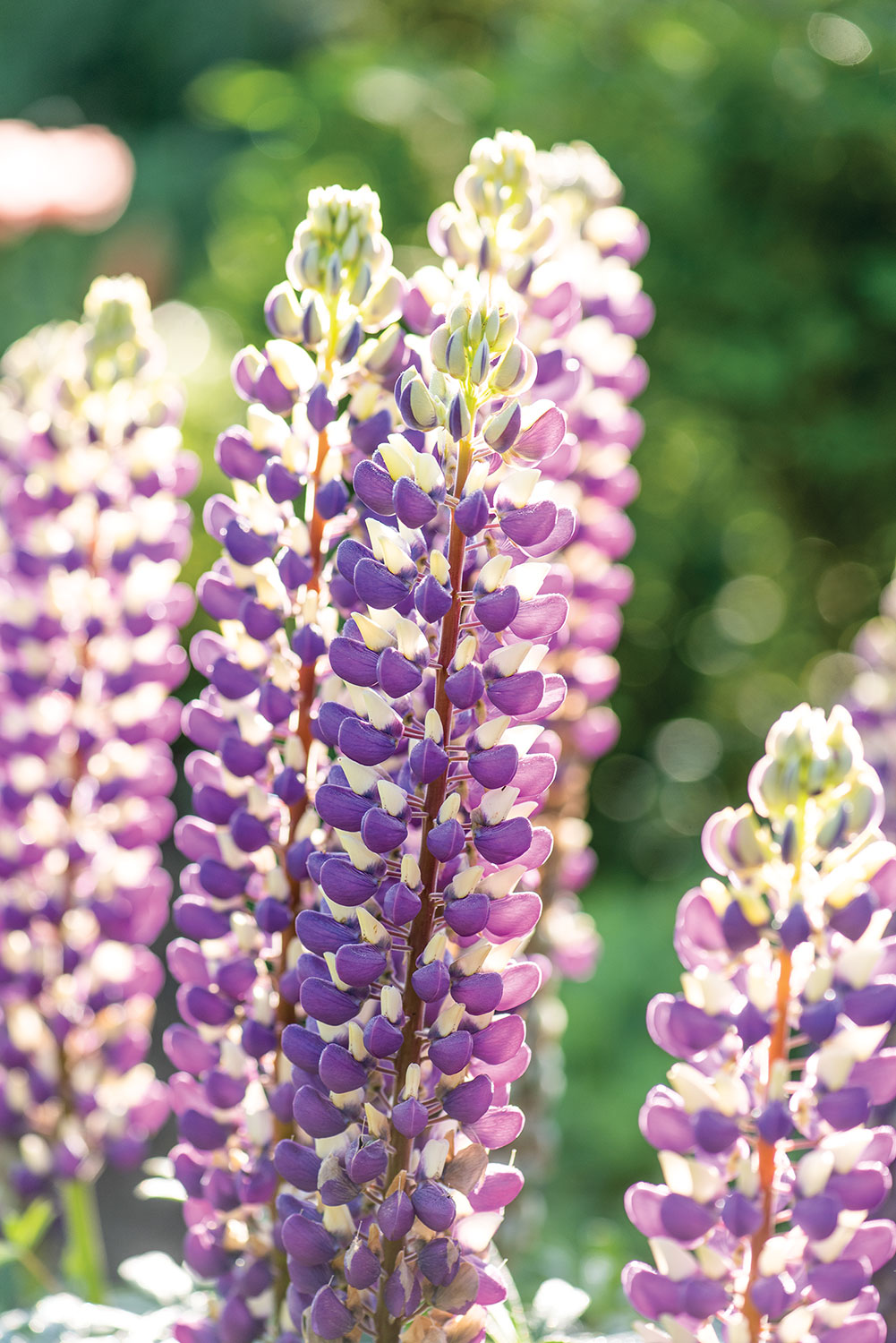 Every three to four years, Sharon replenishes the lupines in the perennial beds. 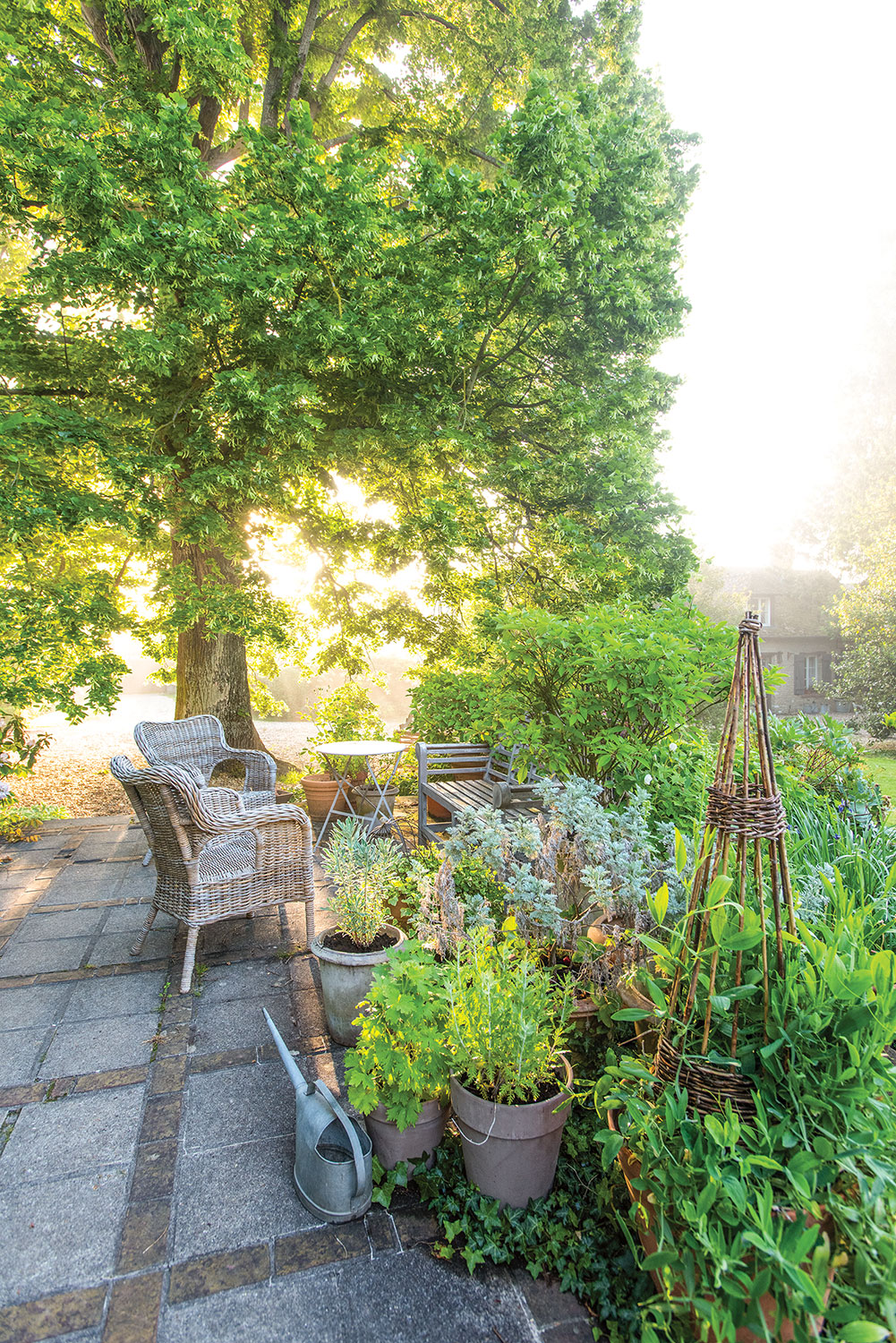 Potted artemisia, delphinium, perovskia, and euphorbia are clustered beside a teak Lutyens bench and wicker chairs. 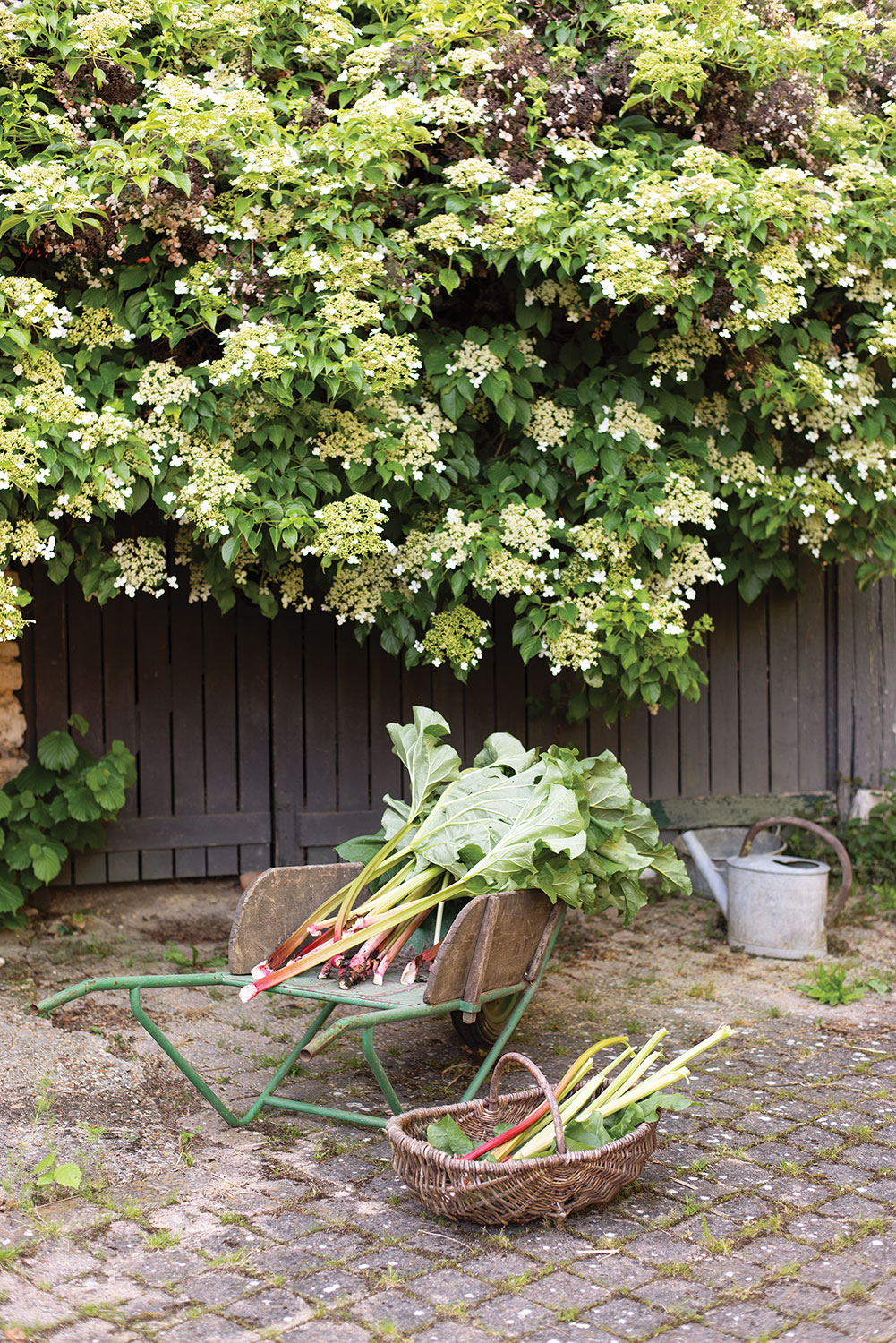 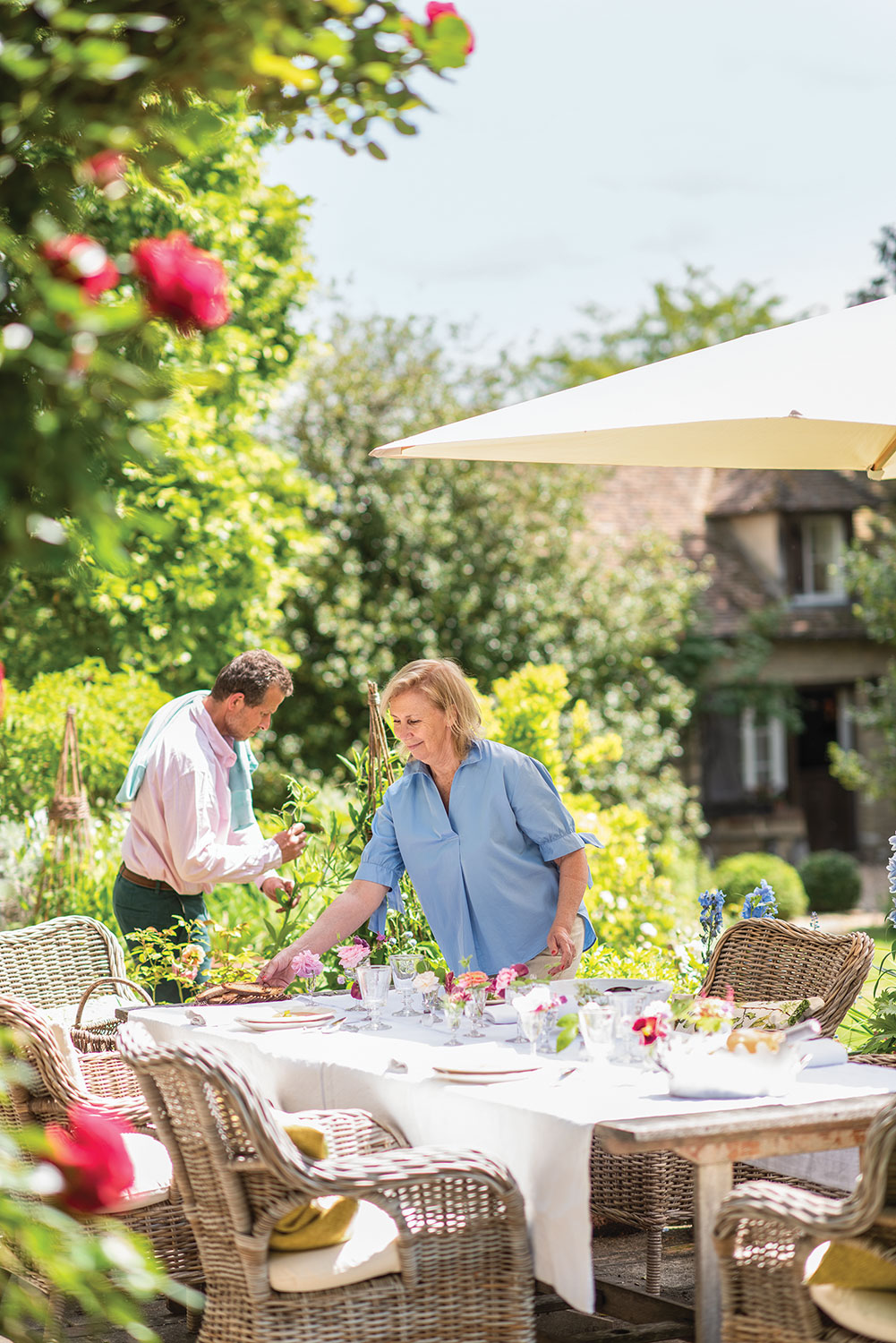 Eric and Sharon set a simple but elegant table for lunch.