Time is of the Essence at Jardin de Buis

It didn’t take this architect and landscape designer long to learn that ambience is everything. Rather than designing from the inside out, Andrea Filippone listened to the land. 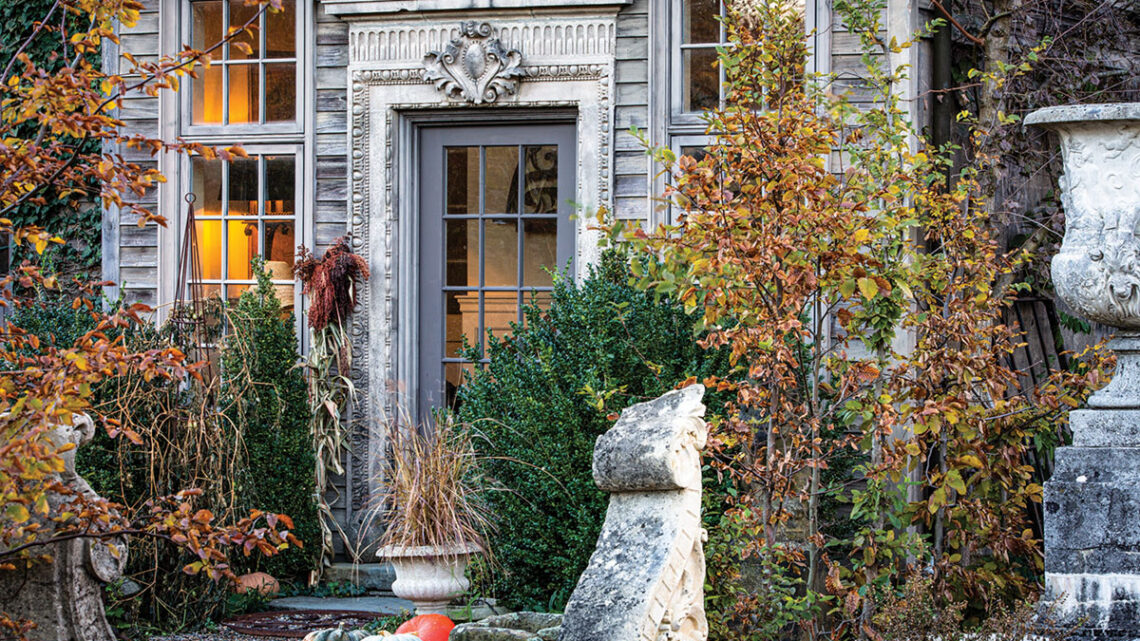 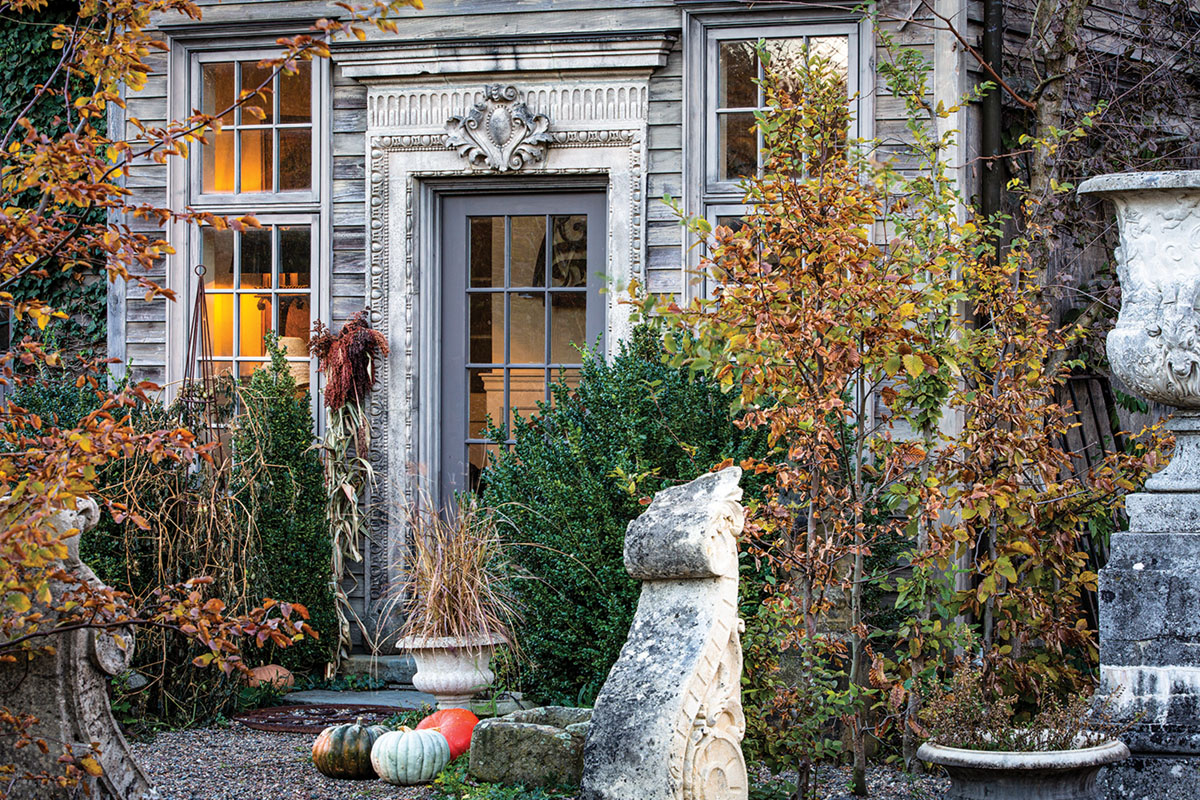 Andrea Filippone now knows that the landscape shapes a lifestyle. But as a young architect, she didn’t always have that perspective.

It was autumn 1994 when she first saw the abandoned barn brimming with old auto parts that eventually became Jardin de Buis. At the time, she was just looking for an affordable rural New Jersey property, knowing that she could salvage even the saddest structure. And the scene, including its six hardscrabble acres, was pitiful. Somehow, Andrea saw promise. 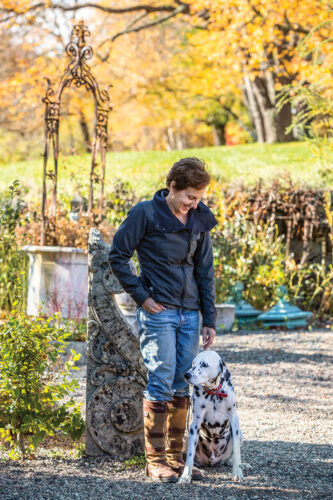 Andrea shares an autumn moment with her beloved Dalmatian. 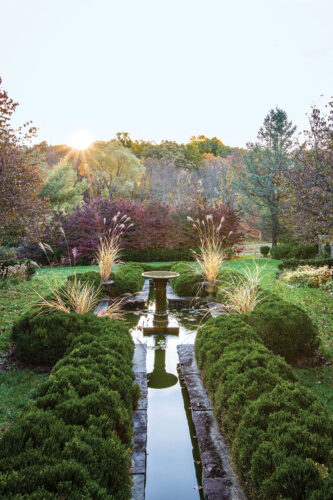 A hedge of Buxus sempervirens ‘Justin Brouwers’ lines a water rill behind the house.

For six long years, she worked on the structures in snatched moments between client projects, renovating the barn and creating attached living accommodations for her family. In 2000, she was ready to move in, even though one wall was still under construction. Perhaps fittingly, Andrea and her family had company their first night living on the site: A whole lot of flutter revealed that barn swallows were still sharing the space.

So the lines between in and out were always blurred. Meanwhile, Andrea was learning while tackling commissions that the landscape is critical to the mood she strives to create. In fact, she came to realize that shaping a lifestyle means bringing every aspect of a property into the dialogue. Not only did she bring that knowledge home, but she flipped her professional career to landscape design with the launching of F2 Environmental Design. Simultaneously, she was amassing the ingredients that resonate with her aesthetic. 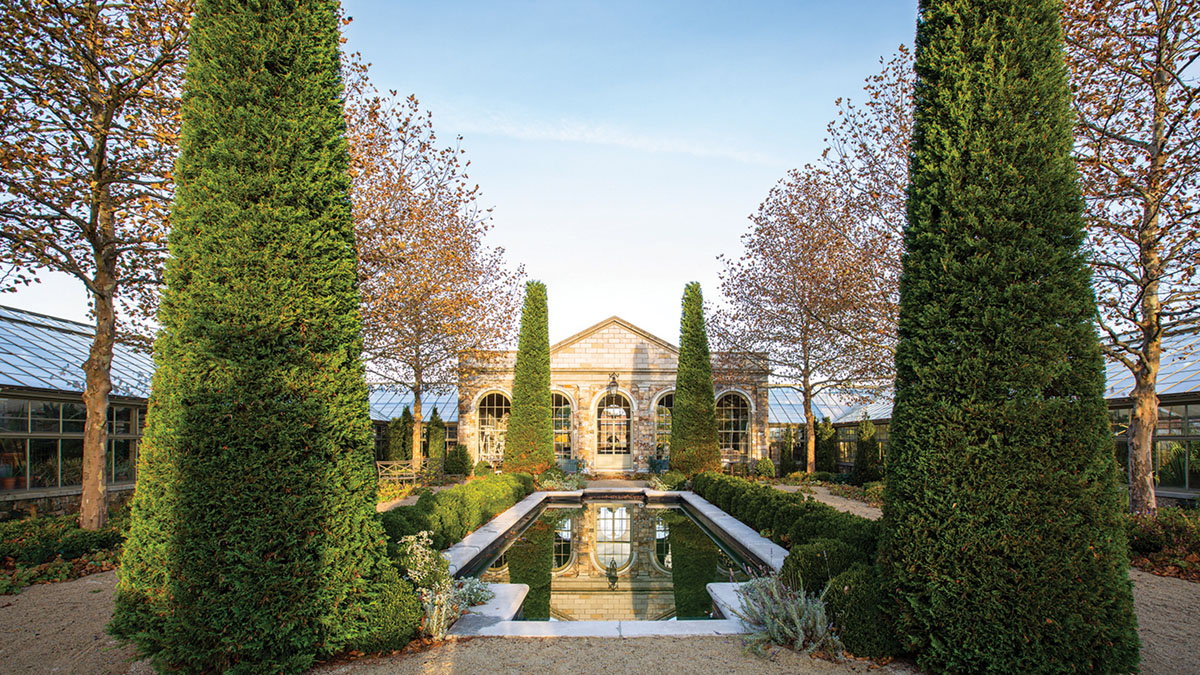 “What I’m striving for here is not something you can generate immediately. It starts with a feeling. And then—over time—all the elements have to be absorbed into the landscape. Everything evolves in a site, and you have to evolve with it.” — Andrea Filippone

Frequent antiquing escapades to France yielded a trove of one-of-a-kind, weathered, timeworn treasures used to forge her own idiosyncratic professional statement. Everything initially landed at her property, and some of it never went further. In fact, a lot of it found a home in the outdoor architecture Andrea was constructing. 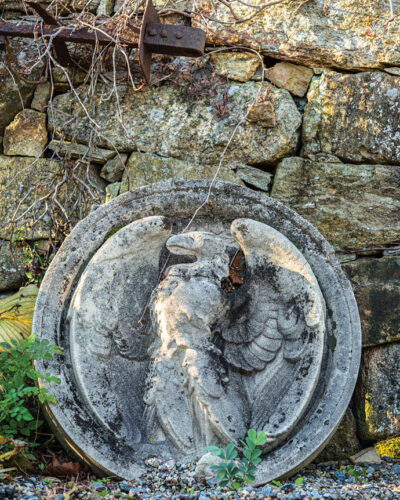 An eagle medallion might have originally adorned a stable.

“I knew that lanterns, an old door, and the right hardware could immediately transform an interior,” she explains. “So how do you achieve that in the landscape? You find the right elements to furnish garden rooms.” 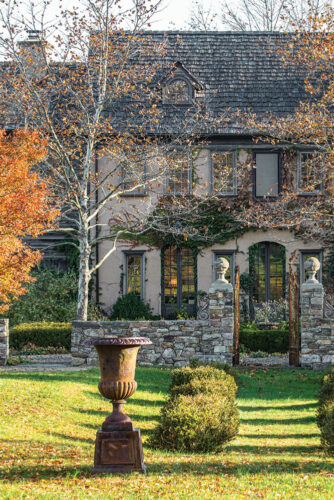 The family’s added living space purposefully feels of the same era as the old barn. 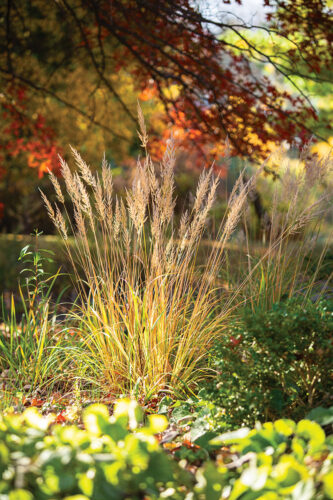 Once you enter Andrea’s world, the whole scene plays into an epic journey unlike any other experience. Additional acreage has increased the property to a total of 26 with stone steps and gravel paths leading from antiques-strewn terraces to enclosed gardens. Further structures are now layered beyond the original barn complex. Most notably, Andrea adopted orphan greenhouses and created a dramatic presentation horseshoeing around a central orangerie with a pool garden and a potager as part of the footprint. Muted paint colors, weathered corbels tucked into a corner, unfilled urns, it all feels wonderfully unstudied. “I want complete immersion,” she says.

“I muted all the colors in the buildings so they would recede, letting the landscape stand out. As a result, the house nestles into its site.” — Andrea Filippone 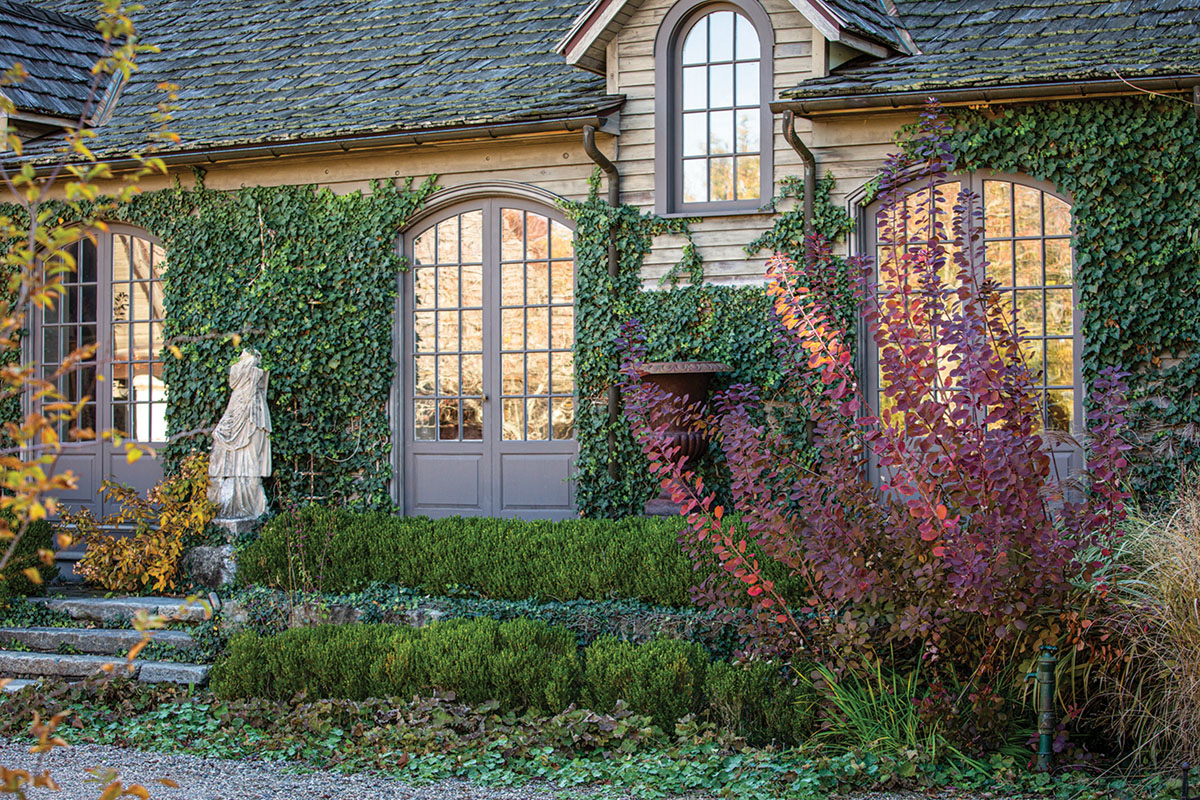 English ivy eases the link between the old and new sections of the house.

With stewardship being at the heart of Jardin de Buis, purely practical conditions spoke loudly in the design process as well. The enclosed spaces were created to shield the house in its windy location, and now they are essential to the design dialogue. “I resisted the urge to reveal everything all at once—which creates a sense of mystery,” says Andrea.

Wandering from room to dramatic room makes you feel deeply ensconced in her retrospective world. Practical roots also anchor the plant selection. In a region heavily affected by browsing deer, Andrea needs shrubs that are impervious to those nibbling creatures—a situation that led her to a romance with boxwoods, which she studied, collected, and propagated to make favorite cultivars more readily available. 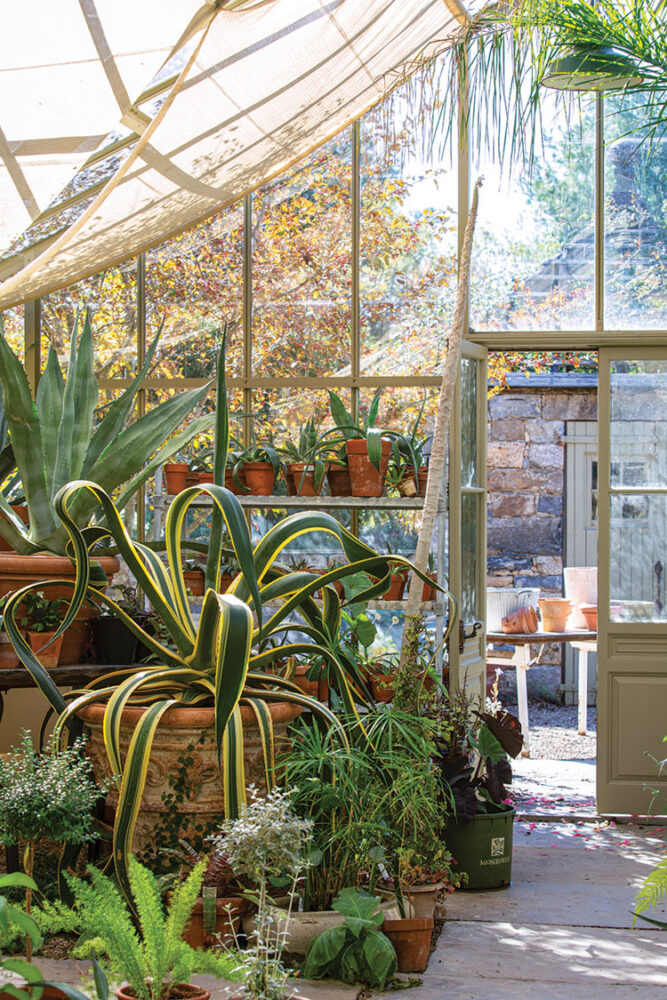 The greenhouses are filled with plants chosen for their architectural lines. 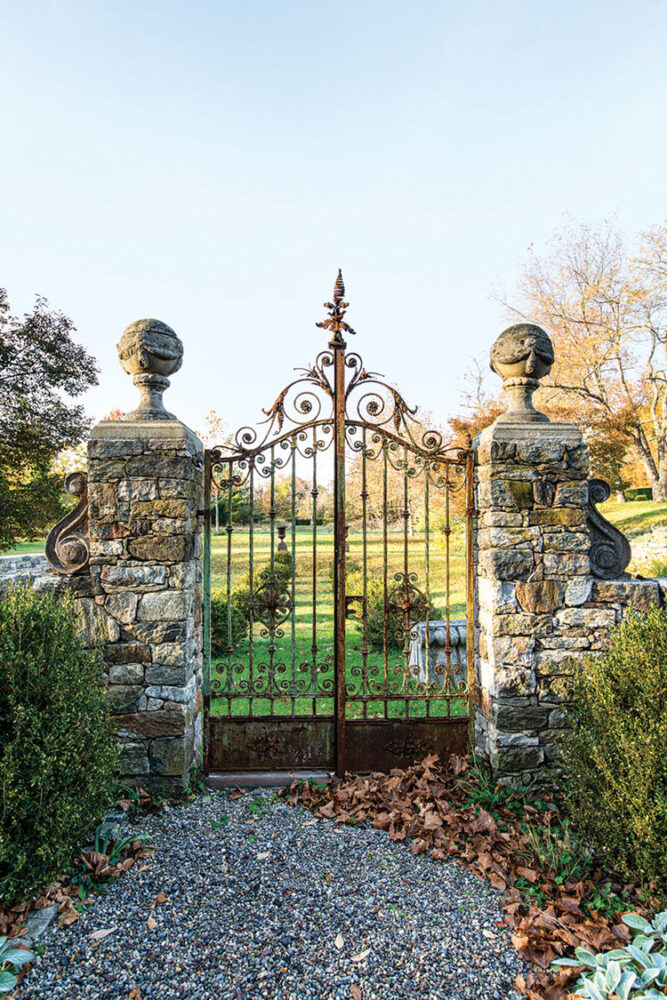 An ornate antique French gate plays against the stone behind the kitchen.

But it goes even deeper. A lot of what happens at Jardin de Buis is literally buried from sight in the soil below. Sustainability is a passion of both Andrea and her partner, Eric T. Fleisher, a horticulturist and soil scientist. Concern for the health of each component in the picture touches every aspect of the gardens.

“We do not create beauty in a vacuum,” Andrea explains. “It’s all part of the whole picture. This is an evolution. I want it to be dramatic, but it took time to be absorbed and assimilated into my land. Everything here is about feelings expressed through nature.”

Jardin de Buis is where the realities of nature and the imagery of fantasy intersect. 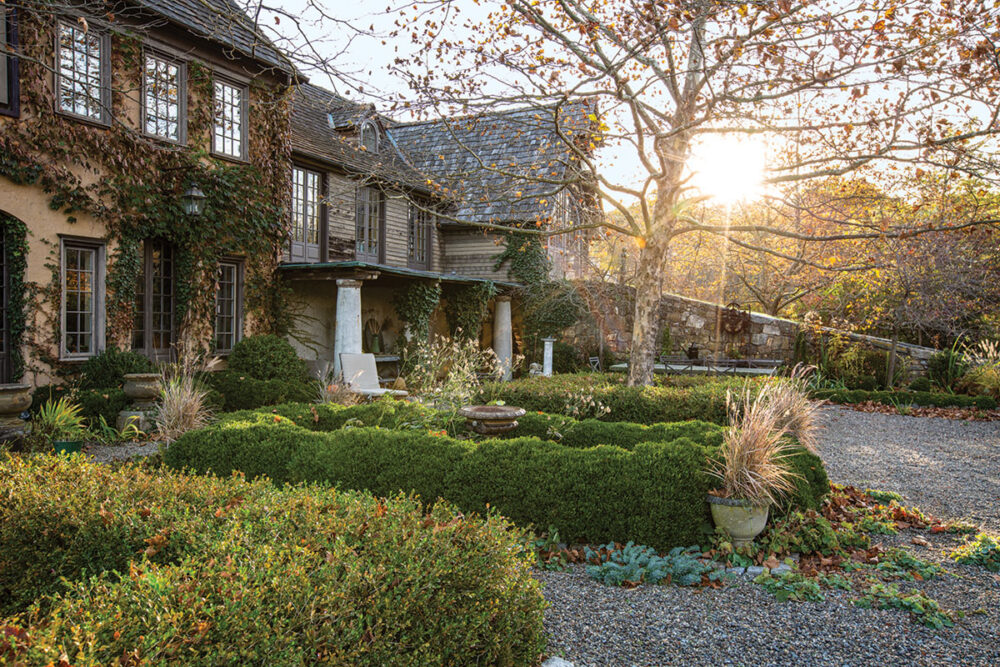 Buxus sempervirens ‘Justin Brouwers’ forms loose edging in the courtyard behind the kitchen.

Andrea Filippone’s goal at Jardin de Buis was to envelop the house in the land, and layering was how she made that warm embrace happen. Everything is part of one evocative statement as you wander from room to outdoor room in the landscape, and Andrea keeps a sense of cohesion by incorporating architectural plant material, weathered stone, and antique elements to craft the timeless scene.

Purposeful Plantings: In the same way that paint colors are earthy to bring the house and its surroundings together, plants are carefully selected. There are no garish colorful pops. Instead, Andrea works with the sun-bleached plumes of ornamental grasses and the stark lines of agaves against foliage backdrops that often feature the wonderful auburn shades of autumn. 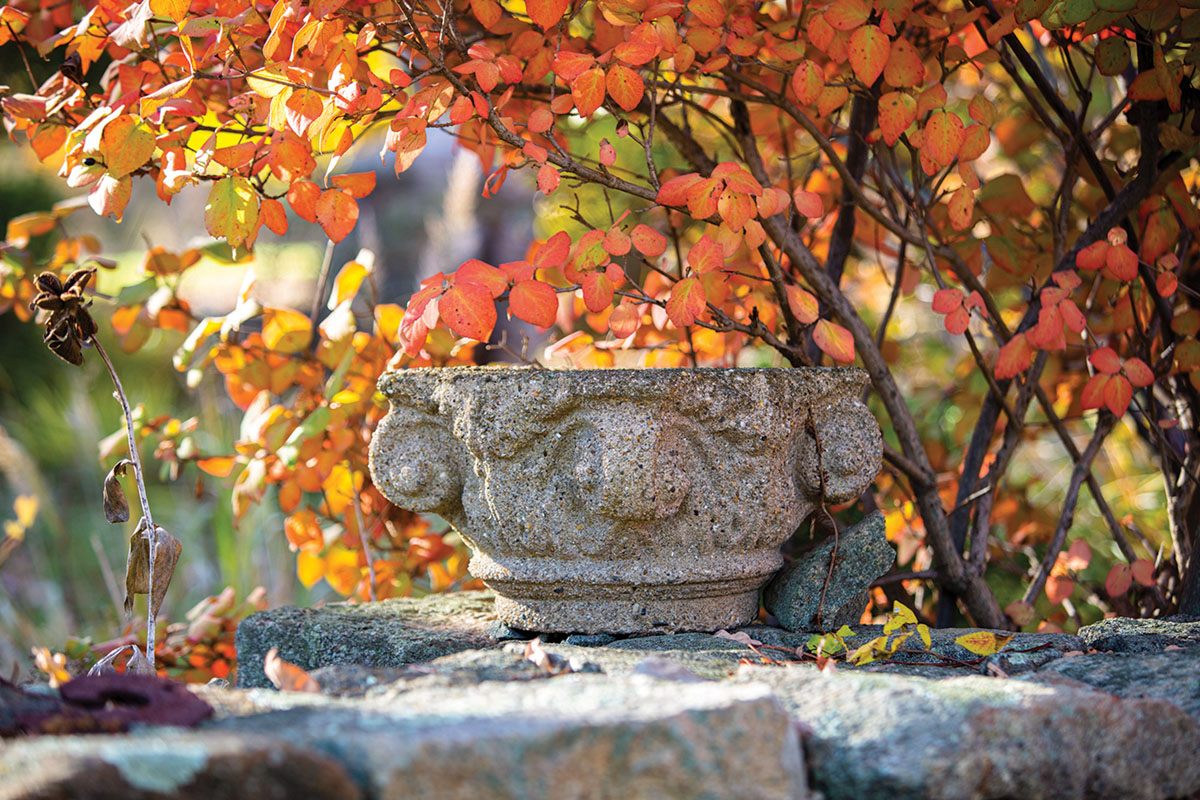 Layered Forms: Although Andrea sculpts and clips topiary, such as the Leyland cypress, to form exclamation points, she is an advocate for allowing boxwood to take a more natural, feathered form—for the health of the plants. Vines climb walls to soften facades, metal tuteurs and gates add to the textural layer, and even the contents of the greenhouse are carefully staged to display the form of each plant to best advantage.

Beneath It All: Andrea always emphasizes that it’s not only about what is visually apparent; Jardin de Buis goes beyond that. The rubric begins below ground, and she sees the soil as the most critical layer and nurtures it. 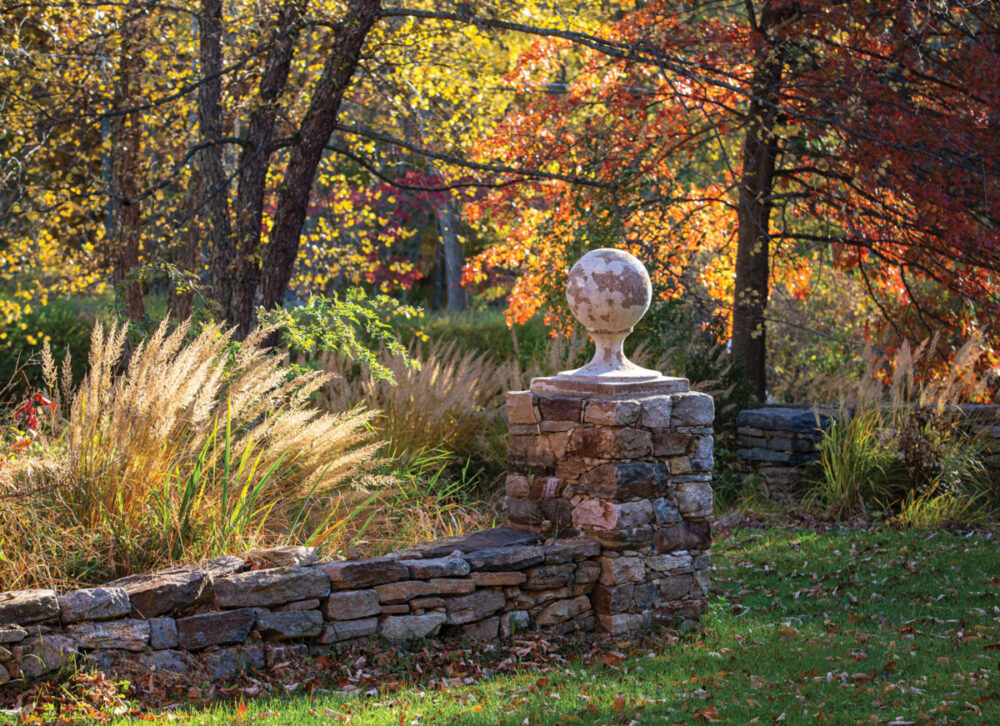