In the journey of a lifetime, Melissa McGrain threw herself into the faithful revival of Fletcher Steele’s grand finale of a garden

Landscape architect Fletcher Steele’s last major commission, on 6 acres in historic Pittsford, New York, has been in the hands of Melissa McGrain for the last 16 years. Over that time, McGrain has made its conservation her passion and life’s work.

“I was not looking for a 6-acre estate or a 179-year home,” McGrain says. But after walking the estate—a symphony of greens with beautiful, then timeworn bones and a dramatic center allée cascading down to a reflecting pool—she mused, “I can do this.” Now, 16 years later, it is as if the estate chose her.

“I believe that my garden is ready to hold her canopy high and tell the world that we are a beautiful, ever-changing garden,” she says. “We will always have growing pains and imperfections, and Mother Nature will continue to bring on whatever she wishes, and that’s OK! There is magic at every turn.”

To keep guests from becoming delightfully lost, McGrain hands out a map. The central allée is the focal point: Three cascading terraces sweep down to a reflecting pool of midnight blue abloom with white water lilies.

The allée looks longer than it is, enhanced by Steele’s use of false perspective and progressive narrowing. At the top sits a grotto lined in lead centered by an oval rose garden showcasing antique varieties and a favorite David Austin white bloom, ‘Desdemona.’ Additionally, under McGrain’s stewardship, a wrought iron swag-chain balustrade, two fountains, and a unique clay-tile irrigation system have all been painstakingly restored.

Flanking the central allée are woodland walks on mowed grass paths that meander through groves of towering trees. A shade garden anchored by an antique Italian baptismal font (now a birdbath) and a secret Green Room surrounded by yews serve as hidden gems of the sprawling garden. The apple orchard, also planted by Steele, sits in a dramatic grid and has over 25 varieties of apples and ornamental crab apples. McGrain loves to walk the gardens at sunset, often on an odyssey of discovery. “The quietude calls to me,” she says. “It’s magic.”

Getting the magic back took time. “What would Fletcher do?” became McGrain’s mantra. She became pen pals with Nancy Turner, who commissioned the garden with her husband, Richard, after relocating the 1840 Greek Revival house to the site, which was then a barren cornfield and abandoned quarry. From Connecticut, Turner emerged as McGrain’s delighted advisor until her death in 2018.

To get a sense of the site, McGrain, an avid preservationist, pored over planting lists and blueprints of the garden and even found some people who had worked on the estate in the 1970s. She went up in a cherry picker for a bird’s-eye survey, and a friend flew over in a helicopter to provide some aerial shots. With her team of gardeners, three full-time individuals with similar energies (“we do business on a handshake,” she says), she was ready to begin the challenging conservation, which would take many years.

“As with all things Mother Nature, you can’t rush it.”—Melissa McGrain

It took up to eight years alone to thin and remove deadwood and research suppliers for replanting. In her kitchen, a bookshelf houses her copious, detailed garden journals.

“I had some lively conversations with Nancy Turner about her experiences with Mr. Steele,” says McGrain. “I spent hundreds of hours scouring the blueprints Mrs. Turner left for me, along with the drawings in the library at SUNY College of Environmental Science and Forestry (the site of Steele’s archives). But more importantly, I threw myself Wellie-boot-deep into the garden itself. That’s where it all became clear to me: This journey will be one of the most rewarding projects of my life.”

Armed with a tape measure and string, she walked and charted the allées, using a pair of European beech trees on the east and west allées as her sentinels. She discovered Steele’s “good bones,” the journey through his “rooms,” false-perspective allées, and the apple varieties long forgotten. McGrain began her hard work making lots of coffeepot decisions, as she calls them. “I knew my garden could stand on its own once again,” she says.

Today, there is the dance of the seasons, starting in spring, when thousands of daffodils carpet the apple orchard. The crescendo of color continues as dogwood, cherry, and lilac trees billow into bloom with a show of dusky pink and white blossoms followed by a lane of lilacs.

In summer, the rose garden blooms with hybrid tea roses planted in soft pink, white, and deep burgundy. In fall, sugar maples lining the entrance drive (laid out by Buffalo, New York, landscape architect Katherine Wilson Rahn after Steele’s death) are at their most brilliant red, along with yellow ginkgo and bottlebrush. Then the startling golden leaves of the Himalayan birch allée appear.

“It’s like Alice in Wonderland. They start to show off their personalities.”—Melissa McGrain

Much of what McGrain has accomplished is barely recognizable. When bringing back the beautiful bones of the garden, she chose to accentuate them with thousands of Medina, New York, stone cobbles laid around the courtyards, shade garden, and long entrance promenade. She created a new organic vegetable garden, potting shed, and cutting garden and uncovered lost landings and antique statuary.

She relates a conversation with her husband, Andrew Stern, who told her, “You have found the beauty hidden for a long time and added to it in the best way. Invisible to some but not to those who know your story.” It’s now one she happily shares. 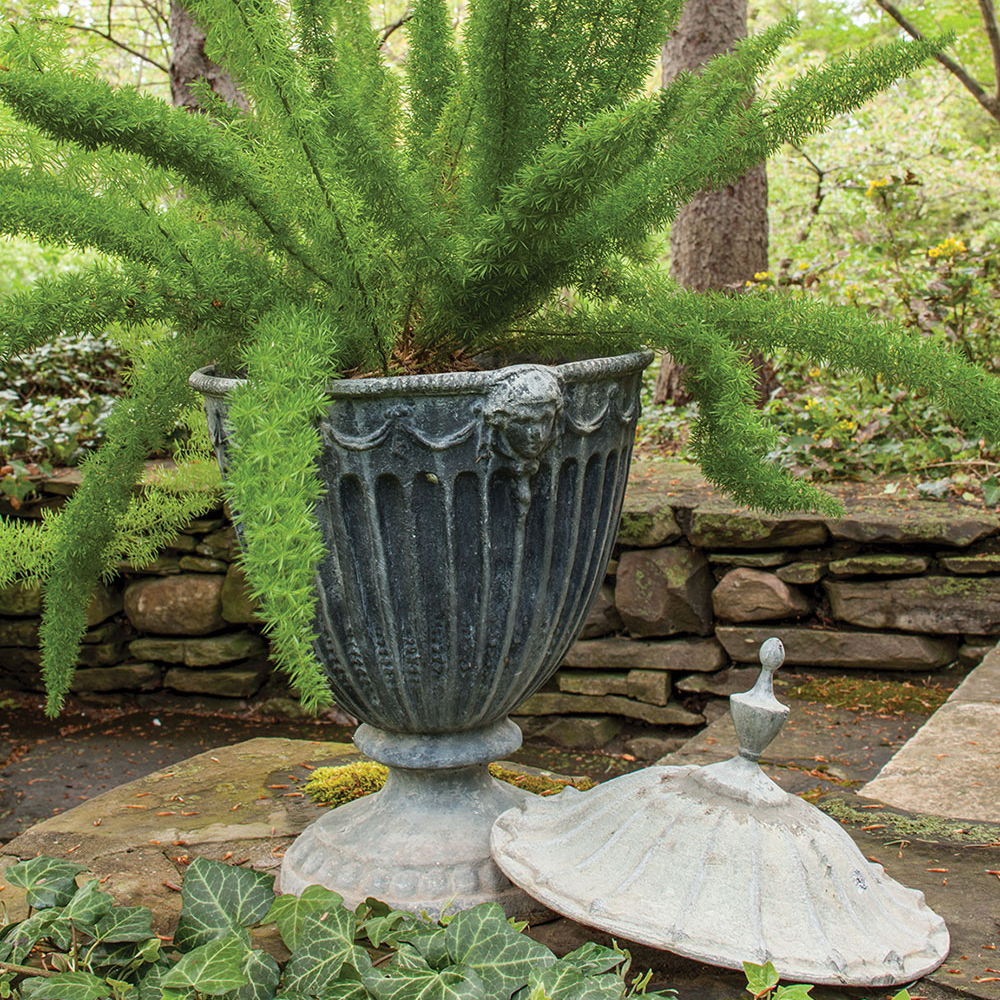 A Regency-style garden urn, circa 1890, holds a foxtail fern. 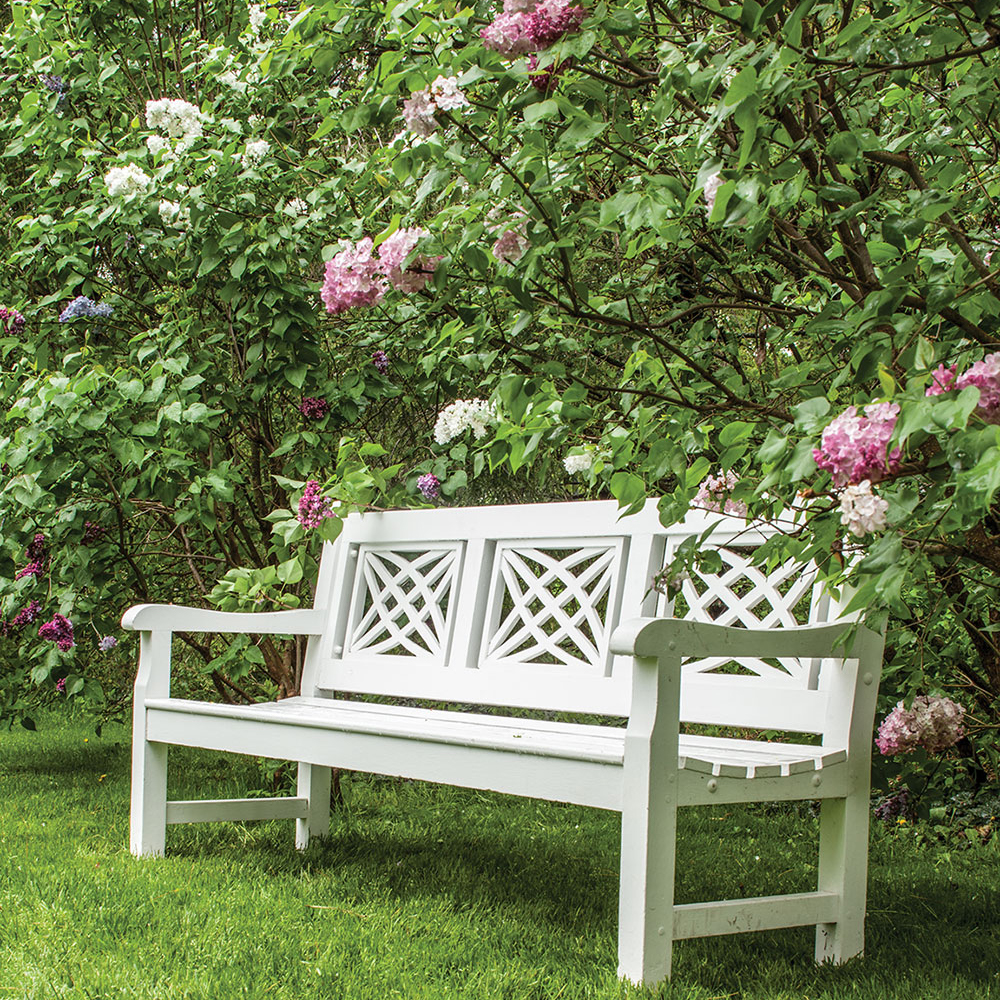 Lilacs at the west end of the apple orchard drape a bench inspired by a historic gate at the house’s original site. 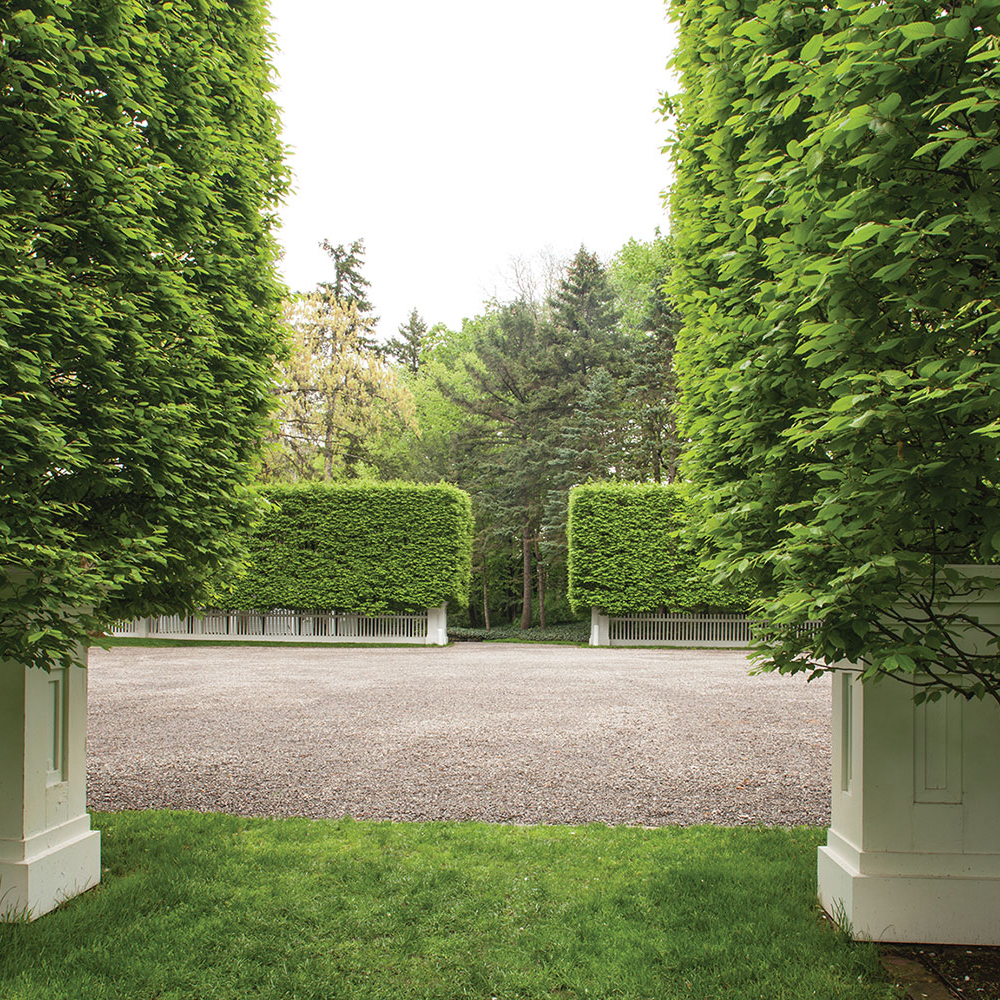 Landscape architect Fletcher Steele designed some 700 gardens in his lifetime. Discover his iconic design at Naumkeag, an 1880s estate in the Berkshires that is now open to the public.