The Glory of Gravetye Manor

At one of England’s oldest and finest country house hotels, the celebrated garden that overthrew Victorian horticultural fashion continues to flourish and evolve

England has an abundance of great gardens and landmark hotels, but perhaps nowhere do they come together more harmoniously than at Gravetye Manor in Sussex. Established in 1598, the handsomely weathered Jacobean structure belonged for many years to influential garden writer William Robinson, known as the father of the English flower garden. In his best-known books, The Wild Garden (1870) and The English Flower Garden (1883), Robinson argued against the Victorian pattern garden, with its geometric plantings of showy annuals, in favor of native and imported perennials artfully mixed into herbaceous borders and drifts alongside meadows, woodlands, and water. Robinson (with his friend Gertrude Jekyll) gave us what became the exemplary English, and to a large extent American, garden: a natural style blending wild and contrived elements that create pleasing vistas, picturesque vignettes, and year-round interest.

The garden guru put his ideas into practice at Gravetye, which he owned from 1884 until his death in 1935. Following his tenet that “formality is often essential to the plan of a garden—never in the arrangement of its flowers and shrubs,” Robinson planted countless trees and shrubs and thousands of bulbs and other eye-catching ground covers, as well as a walled kitchen garden, a heather garden, and a water garden dense with water lilies. The artists he invited to paint the Gravetye grounds found an embarrassment of riches.

But the 1,000 acre property was in a sad state in 1958, when hotelier Peter Herbert set about restoring the manor and turning it into one of Britain’s first country house hotels. With the help of Robinson’s old gardeners, Herbert cleared the overgrowth and replanted species where they had grown in the garden’s prime. The restoration continued for more than 40 years.

Aided by its proximity to London, Gravetye soon became a getaway known for the caliber of its lodging and cuisine. in 2010, English investor Jeremy Hosking and his wife, Elizabeth, who had been guests there, bought the property and have continued to mondernize the manor and improve the grounds with the help of eight full-time gardeners. “A lot of people come specifically for the garden,” says head gardener Tom Coward, whose 30-acre domain includes the flower garden, the walled kitchen garden, two acres of orchards, wildflower-strewn meadows, and a croquet lawn. “We grow everything here and use everything we grow.” The cultivated areas supply the hotel with cut flowers, just-picked produce, fresh apple juice, and deep pockets of natural beauty.

In winter, Coward and his staff plan the year ahead, from seed orders to edible crop rotations, and give plants a head start in the estate’s glass houses and cold frames. “Winter shows off the structure of the garden and the landscape beyond,” he says. “It’s my favorite season. You can do a lot with the perennials that remain, evergreens, and heathers, which then blend into early-season bulbs.”

Robinson believed the garden should blend into its untamed surroundings. This makes eminent sense at Gravetye, which is set in the bucolic Ashdown Forest (home of Winnie-the-Pooh’s fictional Hundred Acre Wood). Naturalistic plantings are key to this concept of borrowed landscape, though there is great effort to achieve this effortless look. Quips Coward, “The irony is that you have to work very hard to make it look like you’ve done nothing at all.” 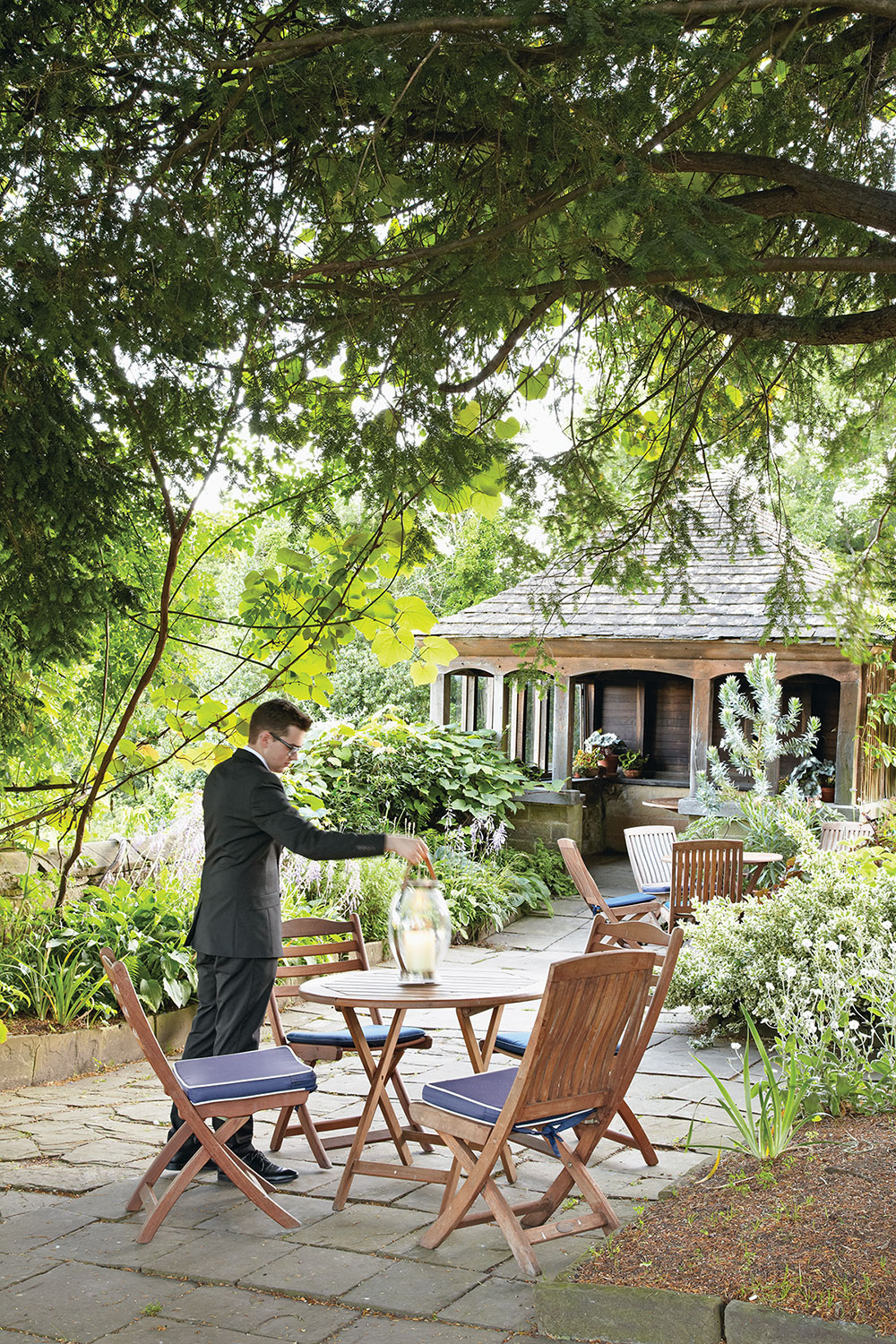 Champagne served in the garden 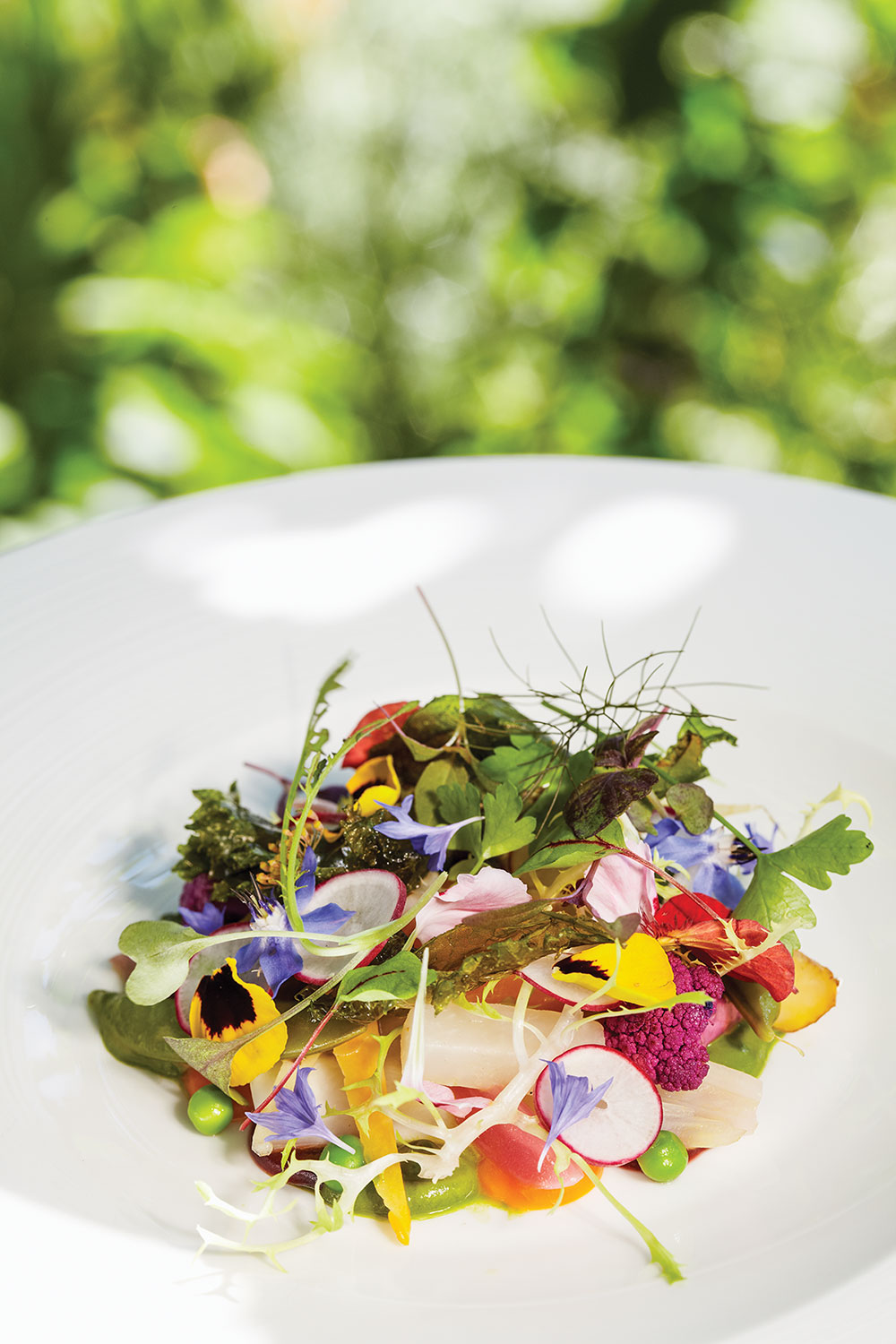 A dish with ingredients drawn from the garden 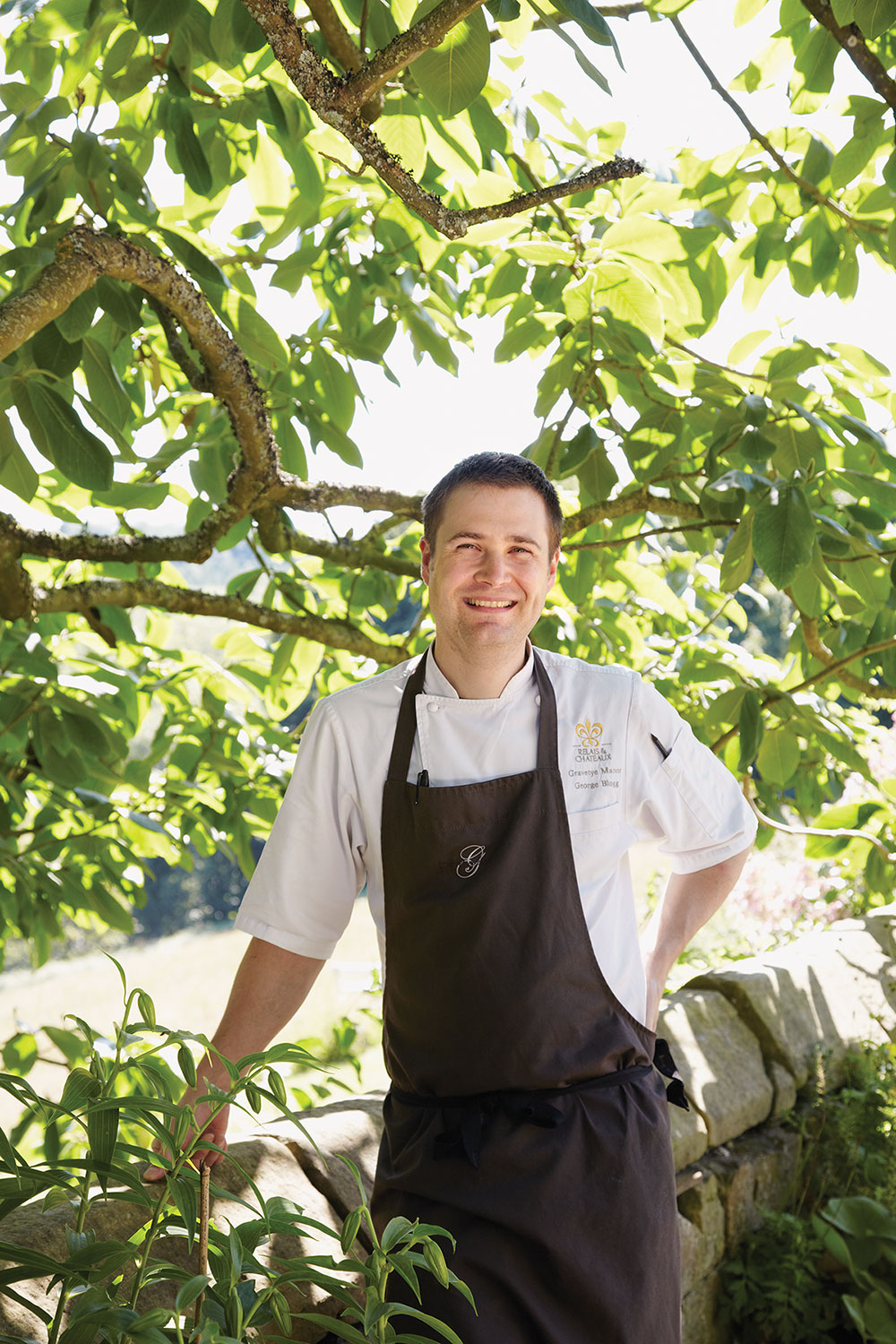 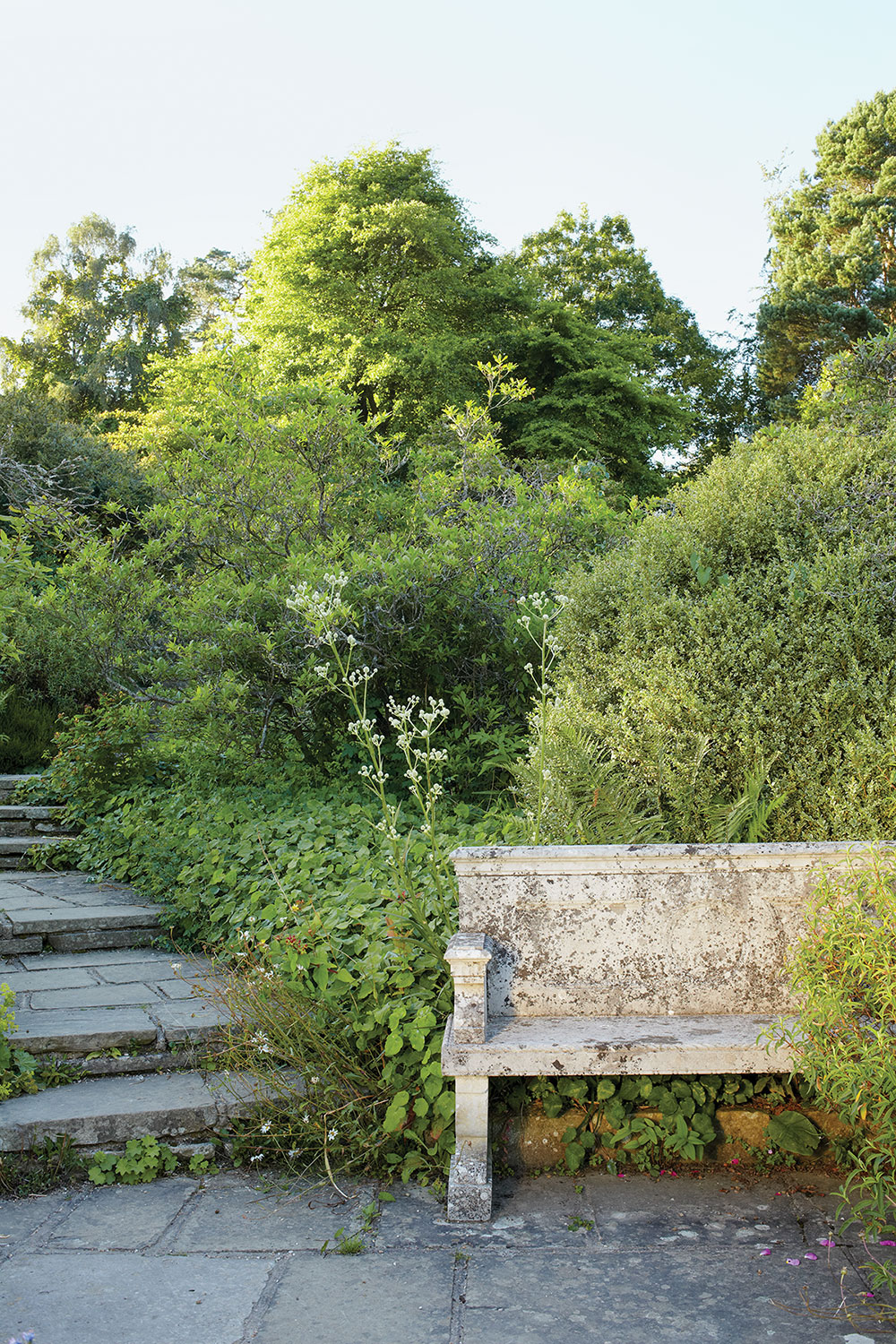 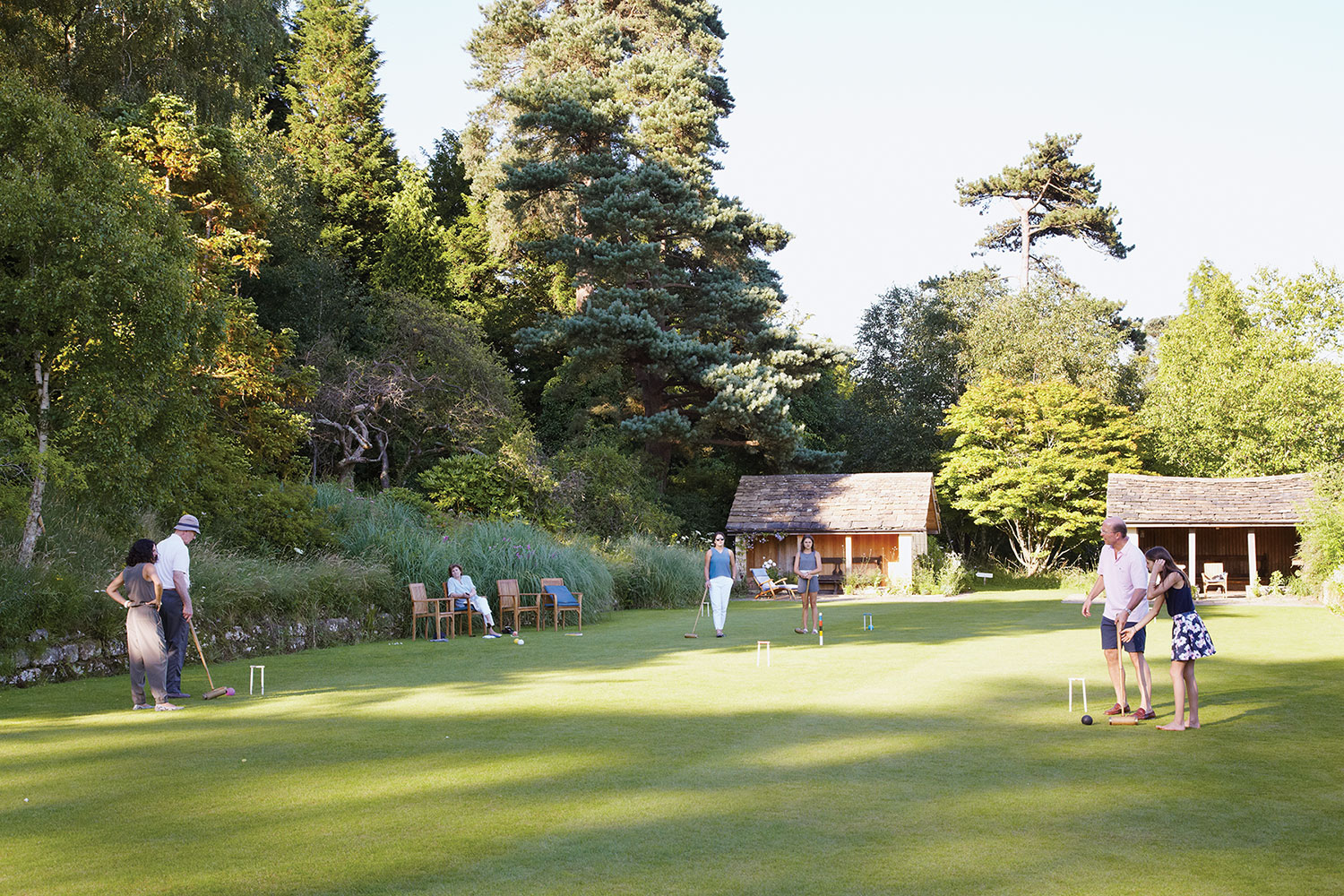 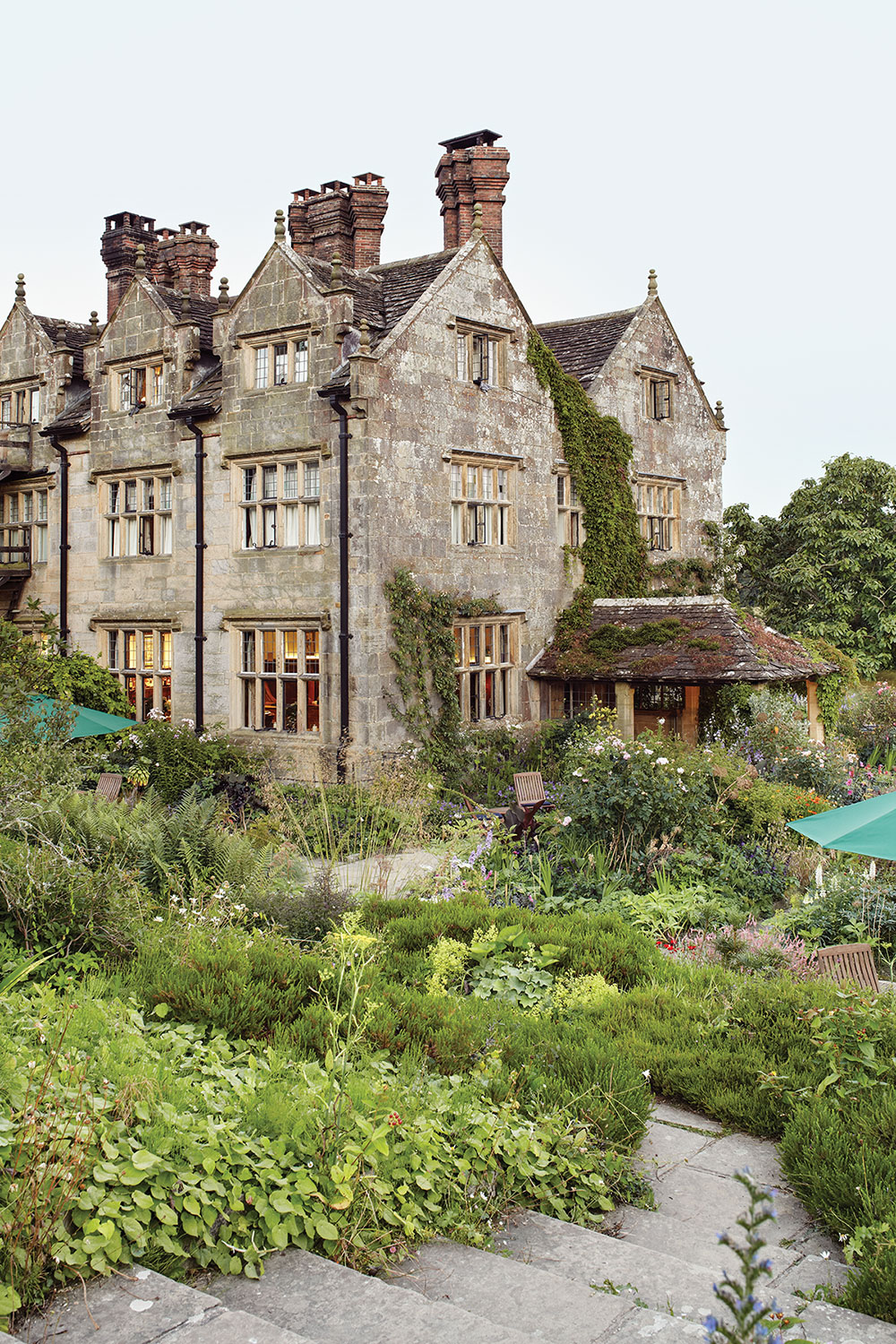 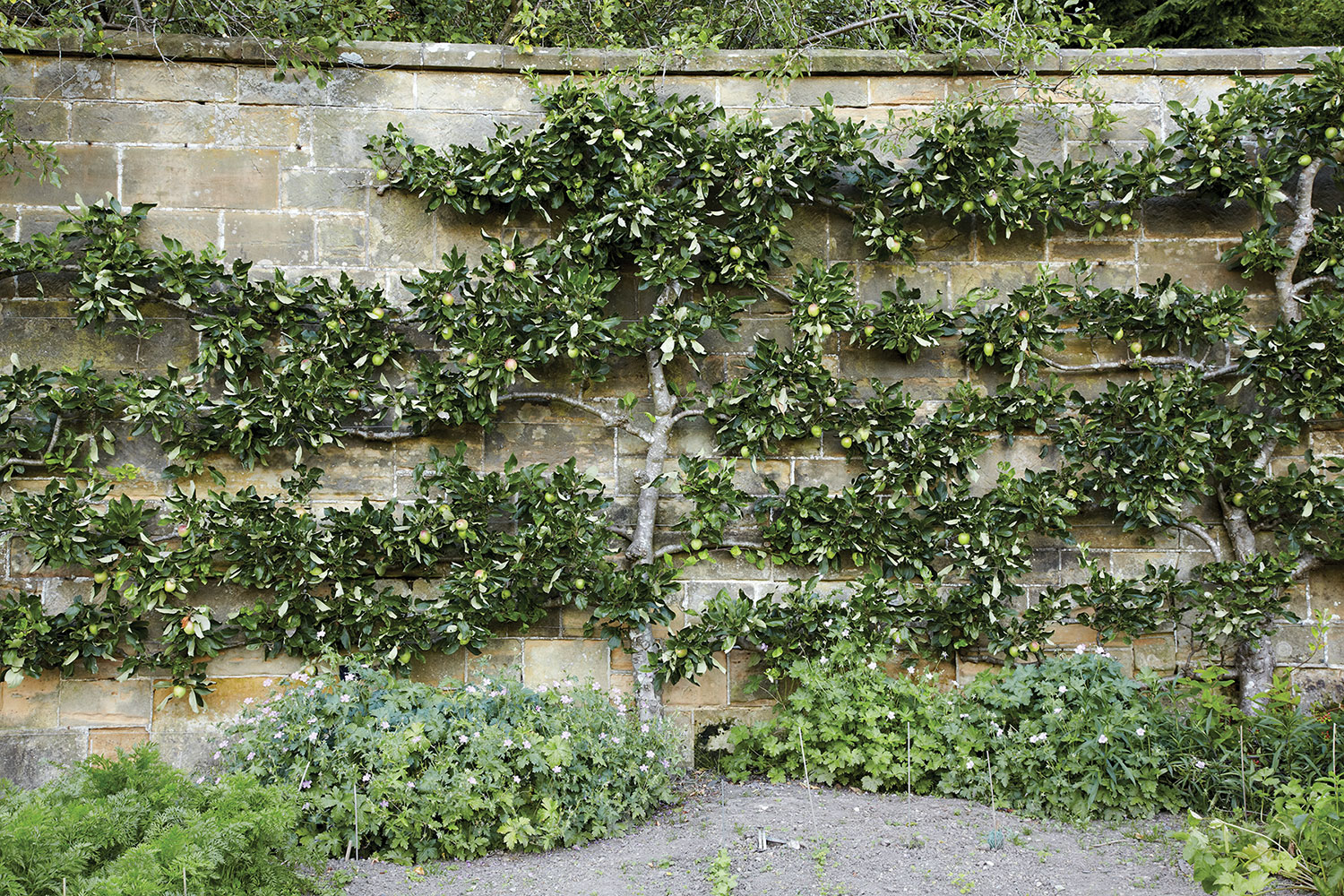 An espaliered tree on one of the garden walls 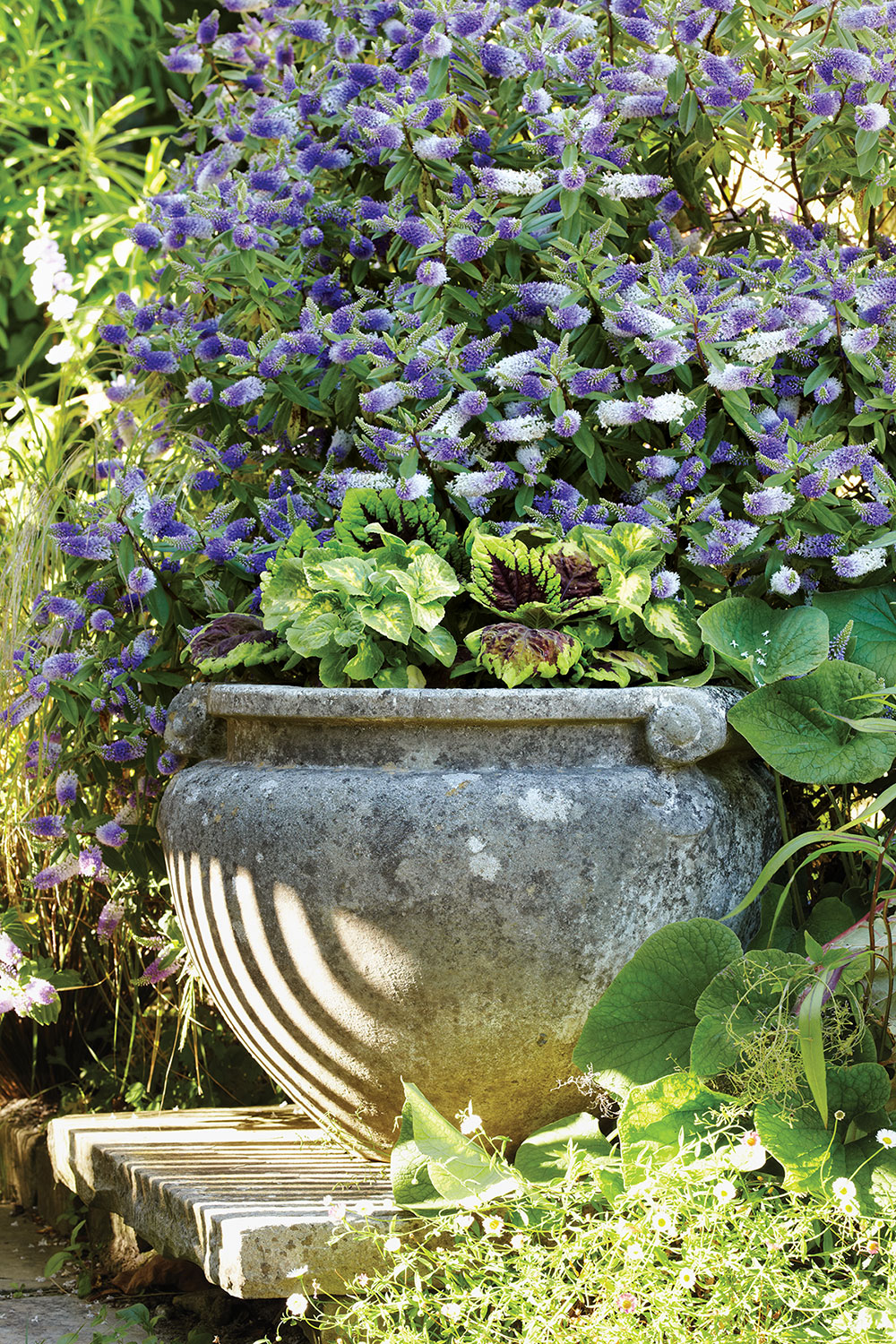 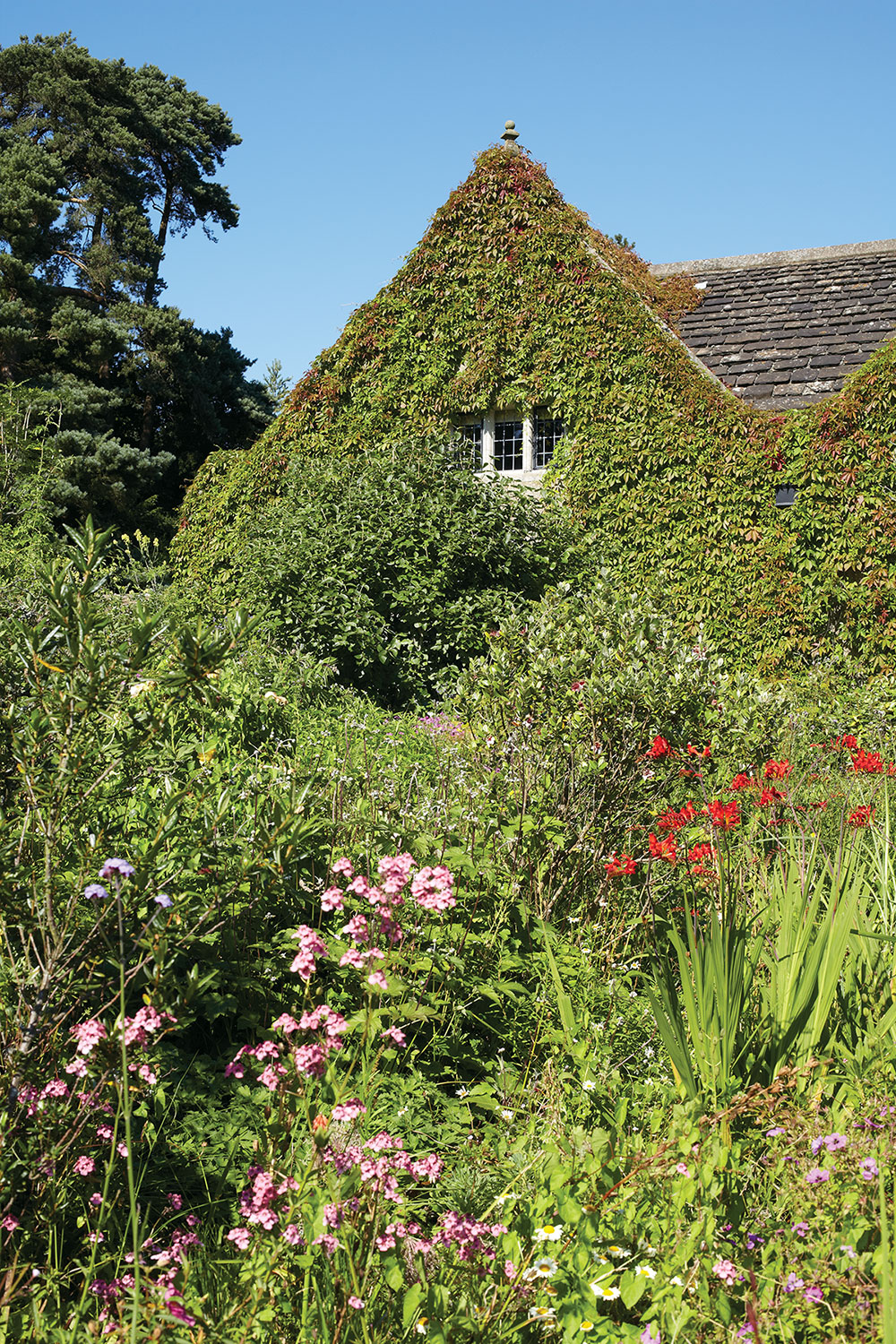 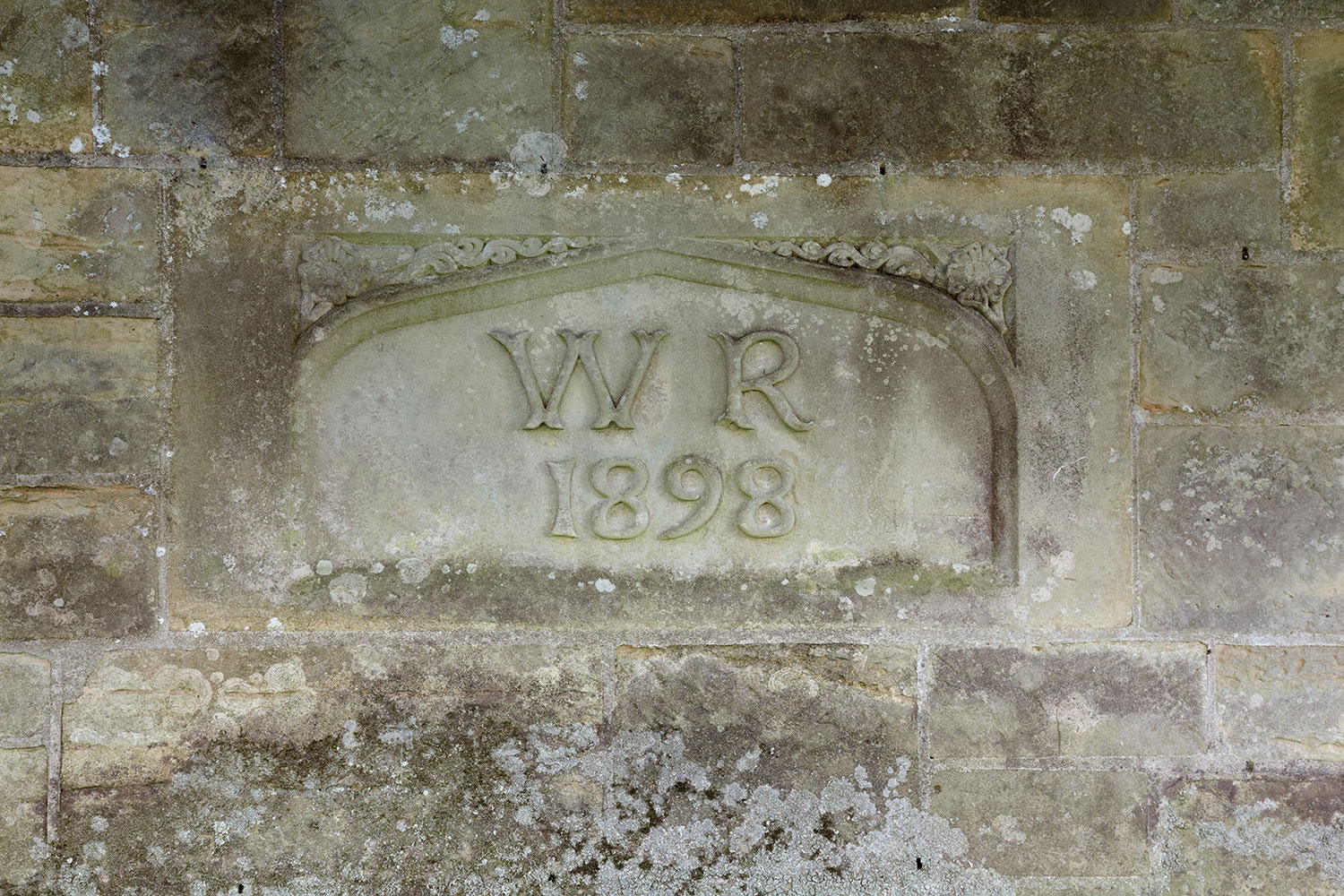 Robinson’s initials in a garden marker

To honor the manor’s 60th year as a hotel, in 2018 the Michelin-starred restaurant received a striking new glass- walled dining pavilion, and the adjacent garden was replanted to maximize diners’ year-round enjoyment. While the grounds pay tribute to Robinson’s original vision and plantings, they are not set in aspic. “The garden changes through the day and through the seasons and year to year, because we’re always trying new things,” Coward says. “Robinson was very innovative, and I’m sure he would approve.”

Robinson made Gravetye “the paradigm in which house, garden, fields, and forest are united in a pastoral work of art as quintessentially English as a painting by Constable,” wrote landscape designer Elizabeth Barlow Rogers. From the riot of spring tulips to summer’s profuse borders, from meadow wildflower tapestries to painterly plates of produce, Gravetye Manor’s cultivated bounty delights the senses.