On the heels of a hectic holiday social season, many people choose to lay low. Cynthia Arnholt is not one of those people. On January 13, the Nashville resident hosted a sit-down dinner for 50 at her beautiful Belle Meade home in honor of her longtime friend Birgitta Williamson’s 50th birthday.

“January birthdays can get overlooked—I know that for a fact because I have one!” Arnholt says. “Birgitta and I always go out for lunch or do something small to celebrate together, but this year marked a big milestone for her, so I wanted to play it up in a very big way.”

Working with event designer Blair Laborde of Sarah Blair Event Design, Arnholt devised the idea for a progressive dinner party. Instead of parading from house to house for each course, however, guests remained under one roof and rotated among tables set in the dining room, breakfast room, kitchen, and study—the latter of which was transformed into a lady’s lounge. As the scenery changed, so did the seating arrangements.

Rather than numbered seating assignments, guests were given “destinations” named for all the cities where Birgitta has lived—Atlanta, Baltimore, Charlottesville, Nashville, Richmond, and Stockholm. Not only did “jet-setting” from room to room allow guests who came from all over the country and world the chance to mix and mingle, but it also ensured that Birgitta had the opportunity to catch up with a new group during every course.

“Everyone loves the intimacy of an at-home dinner party, but it’s almost impossible to pull one off when you have this many people,” Laborde says. “Moving guests throughout the house kept the party going and the conversation flowing, both literally and figuratively. There was so much excitement and anticipation as everyone scurried to find their spot. No one could wait to discover who they might sit with next and what awaited them behind the next door.”

In the breakfast room, tables were topped with sky-high glass cylinders filled with phalaenopsis orchids that drew the eye up to highlight the vaulted ceiling. Slender and sculptural, the vessels were playfully juxtaposed with the wispy air plants, plump hot-pink peonies, and chunky ceramic plates placed among them. Sets of clear acrylic chairs with classic silhouettes afforded extra seating without detracting from the room’s lofty vibe.

Femininity flourished against the backdrop of a whimsical pale-pink printed wallcovering in the lady’s lounge, which was furnished with curvaceous chairs and ballroom-style skirted tables. On the tables, brassy enameled flatware, gold leaf bud vases, and gold-rimmed goblets echoed the gilded beauty of the chandelier and encircled pink-and-white arrangements overflowing with ‘Clooney’ ranunculus, ‘Juliet’ roses, hydrangeas, and eucalyptus.

“Each room had its own distinct feel but there was definitely a sense of cohesion among them,” Laborde says. “I’m not one for themes but, in a way, the repetitious use of flowers and consistent palette created the notion of three separate parties wrapped in a single pretty package.”

More Scenes from the Party 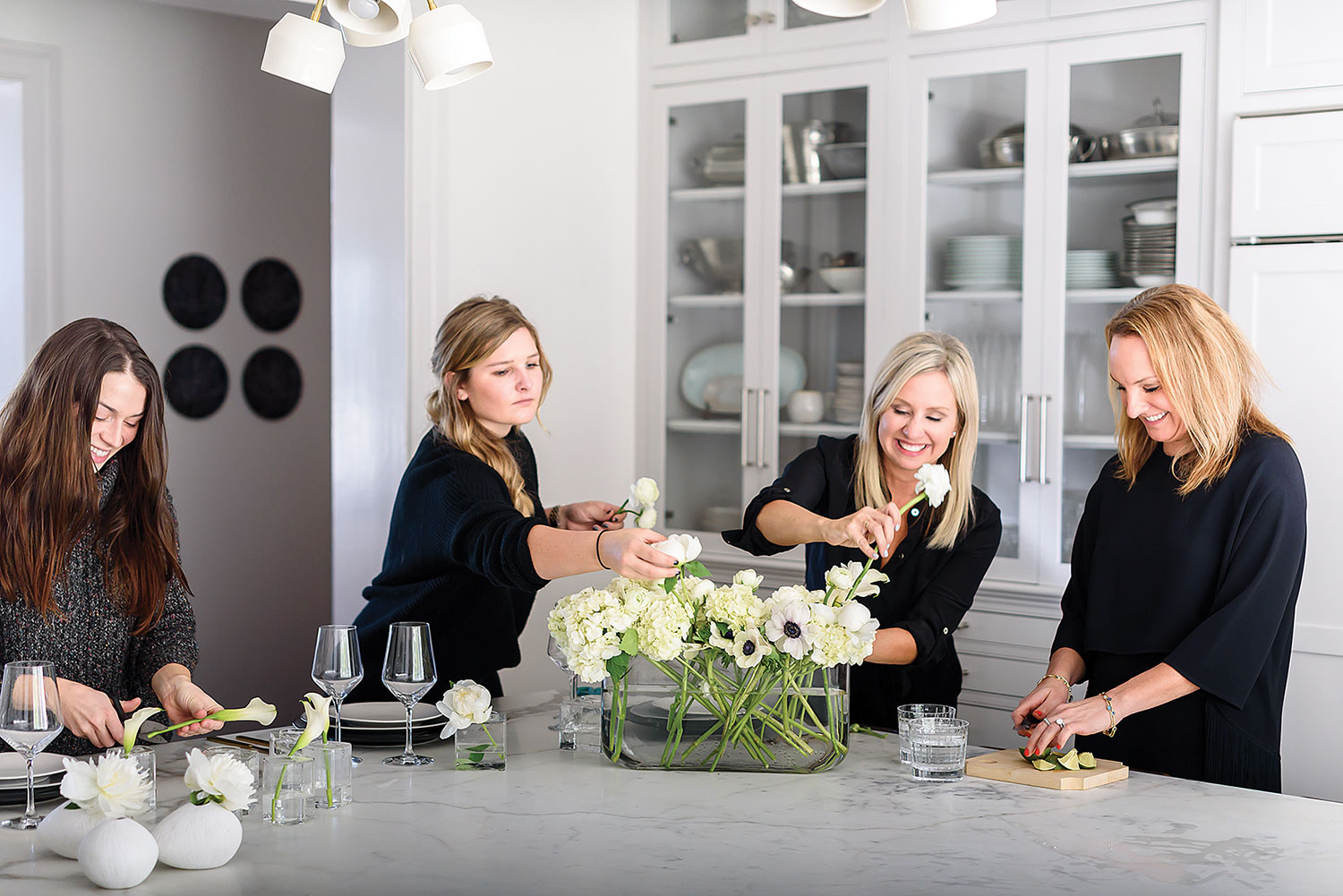 The team preps for the party. 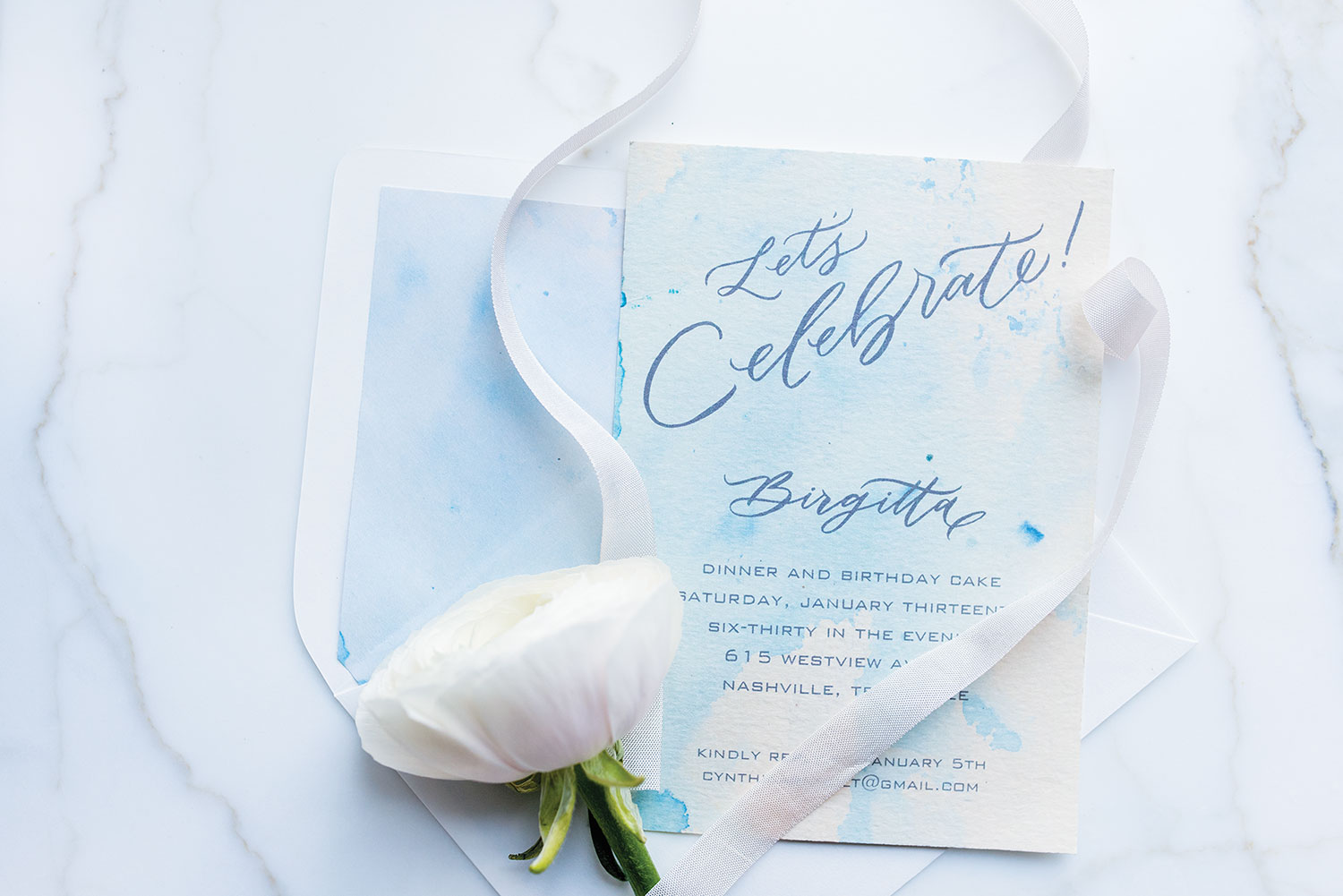 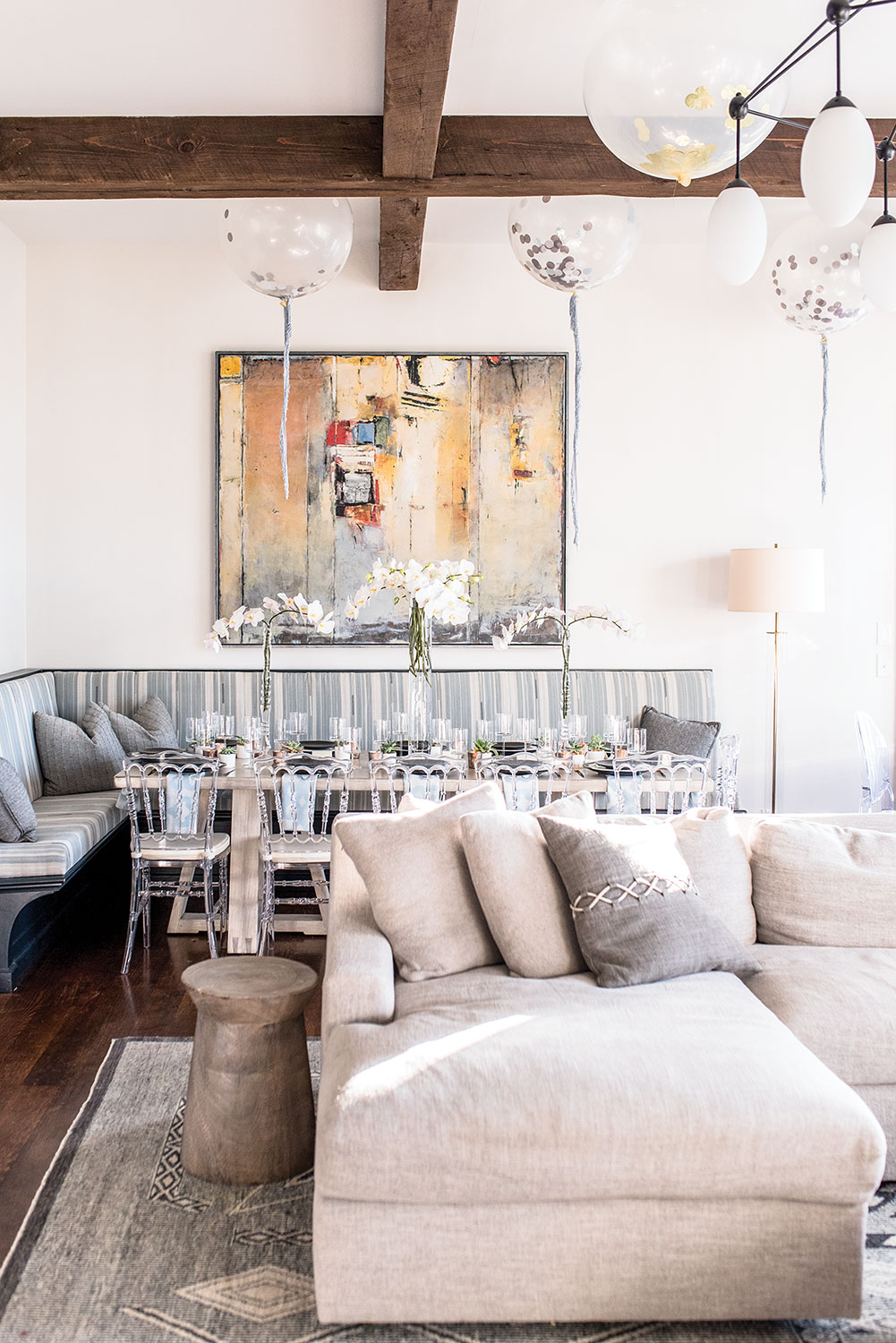 Acrylic Chiavari chairs balance the weight of the 12-seater banquette. 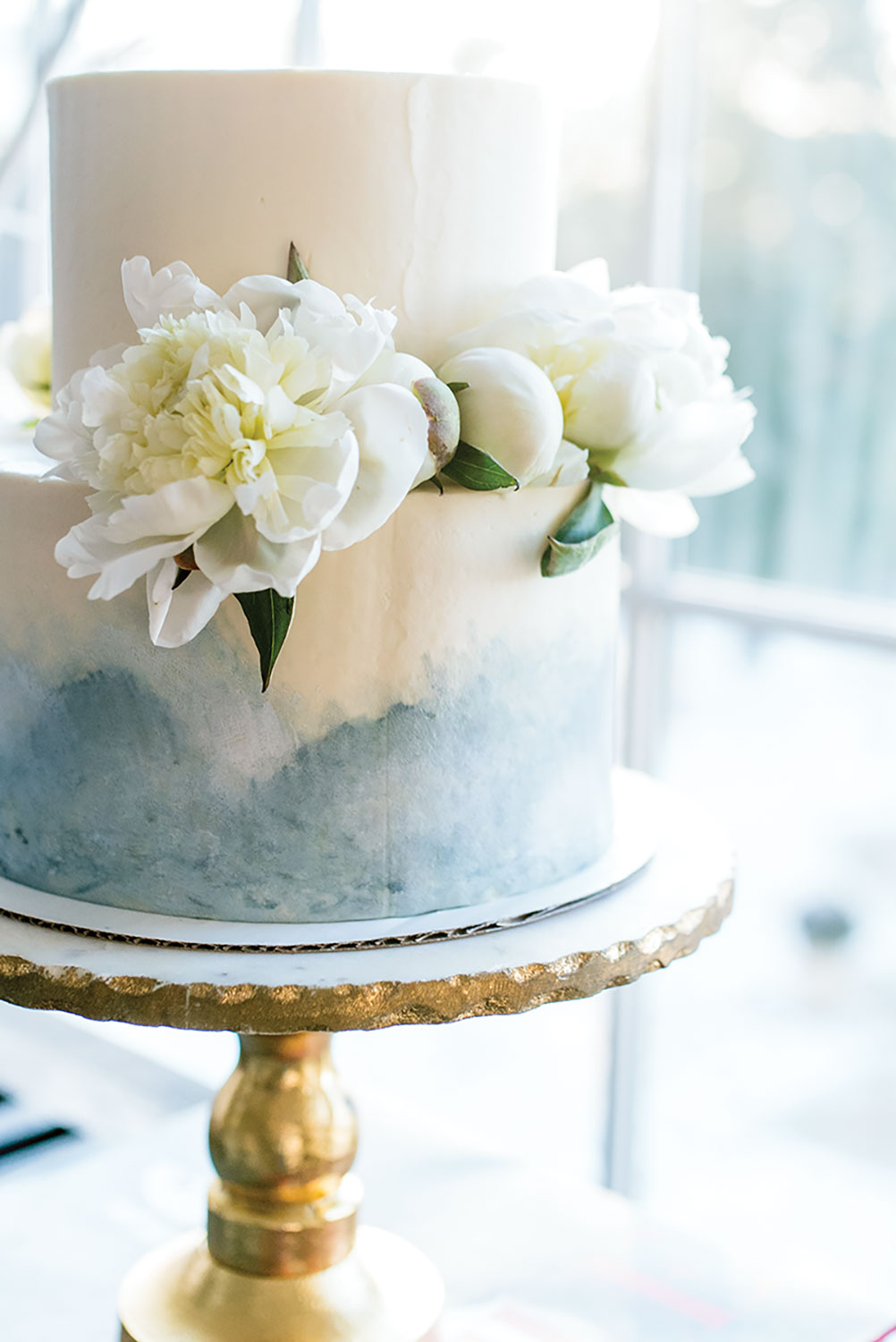 The cake was frosted to resemble the invitation and adorned with peonies. 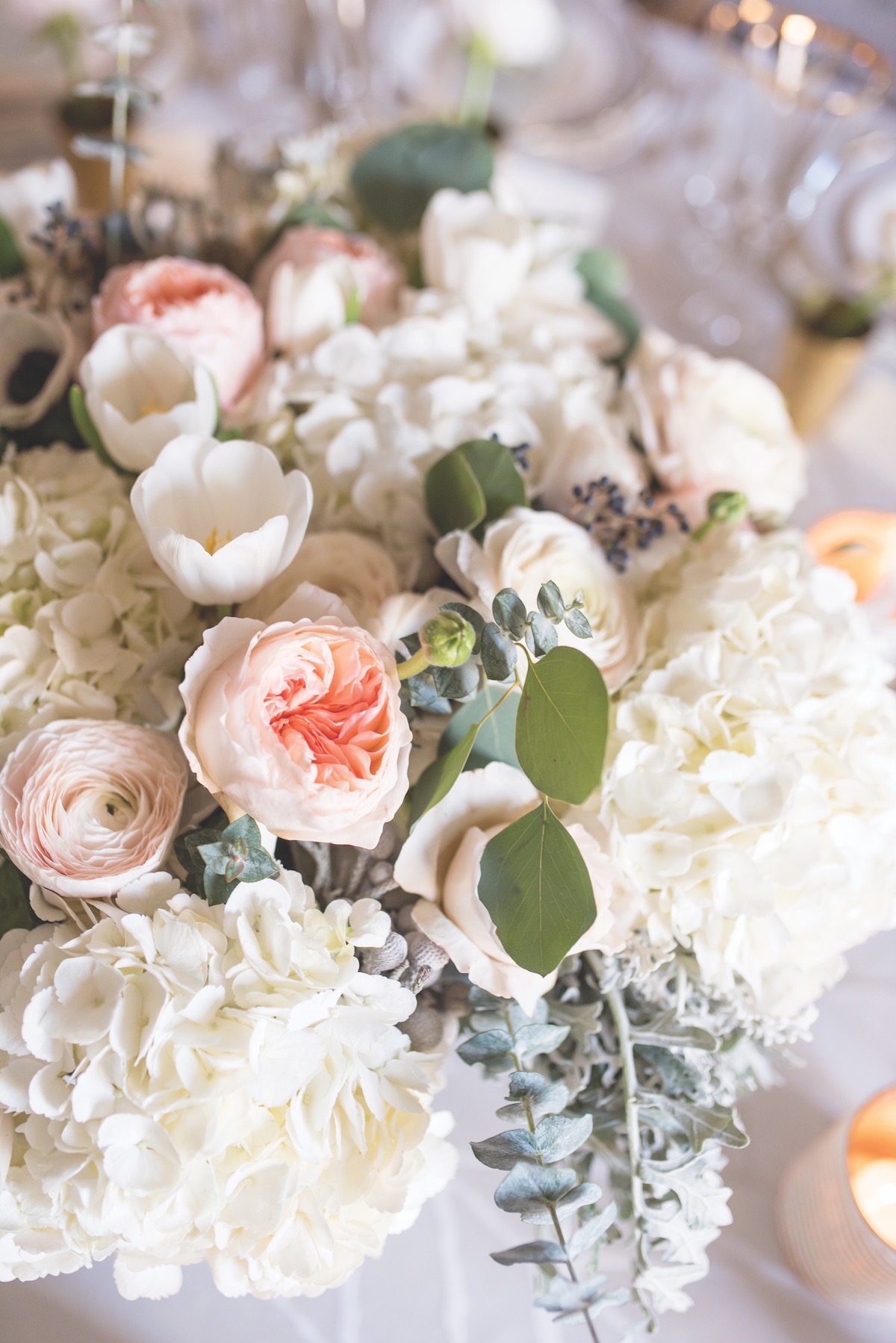 An arrangement of ‘Clooney’ ranunculus, ‘Juliet’ roses, hydrangeas, and eucalyptus 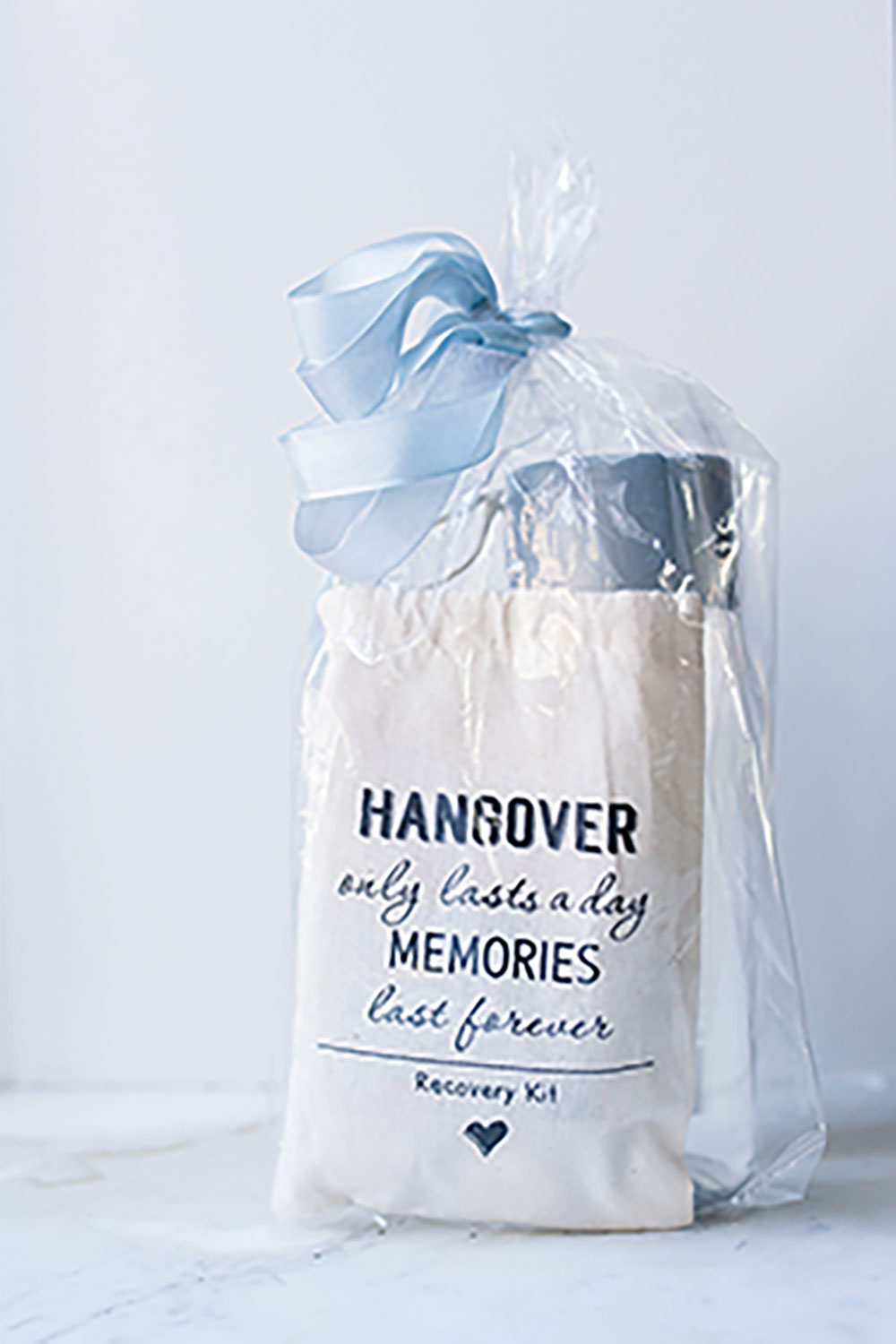 “Recovery Kits” were given as favors. 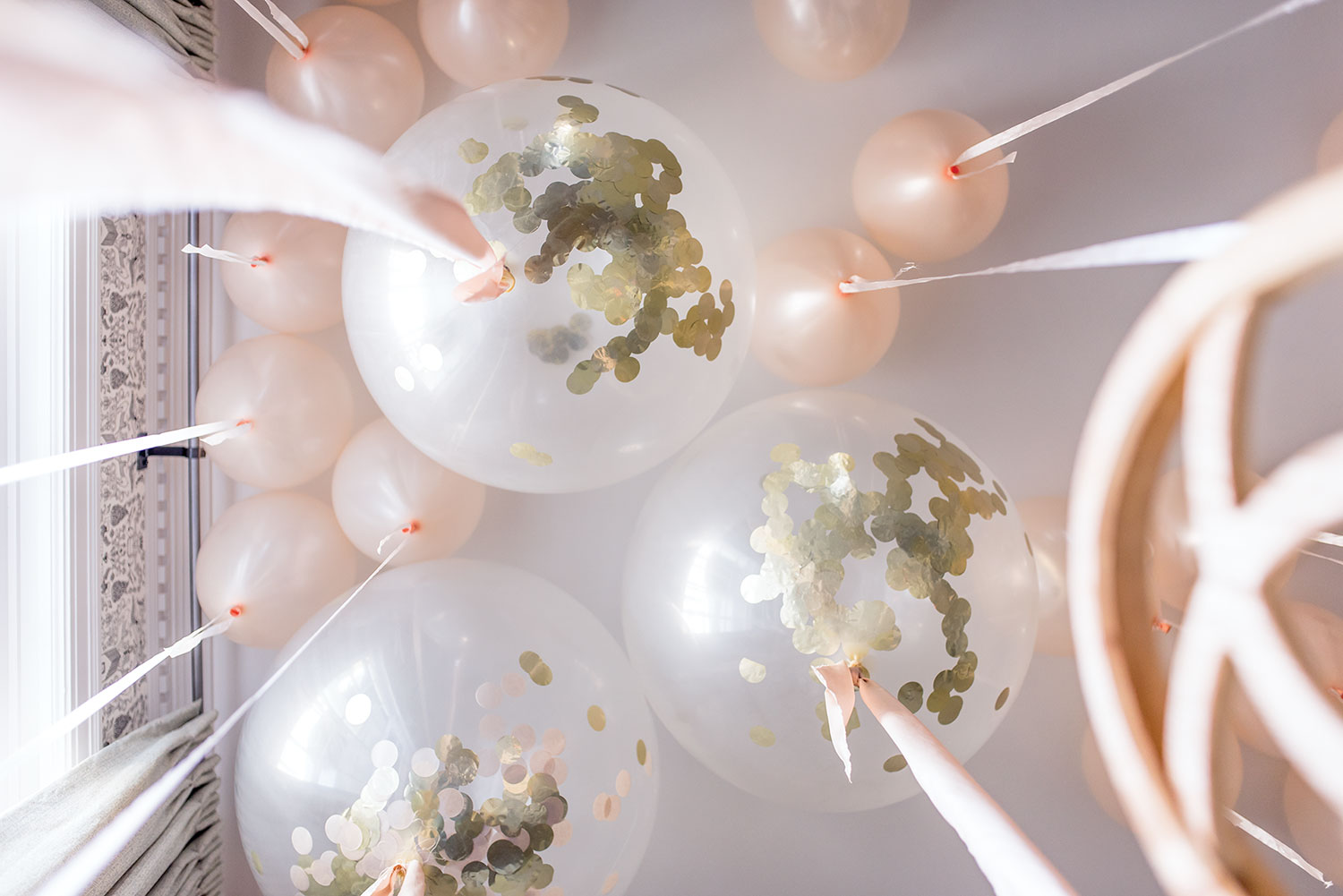 Balloons were filled with gold and silver leaf confetti and tied with handmade silk and velvet ribbon. 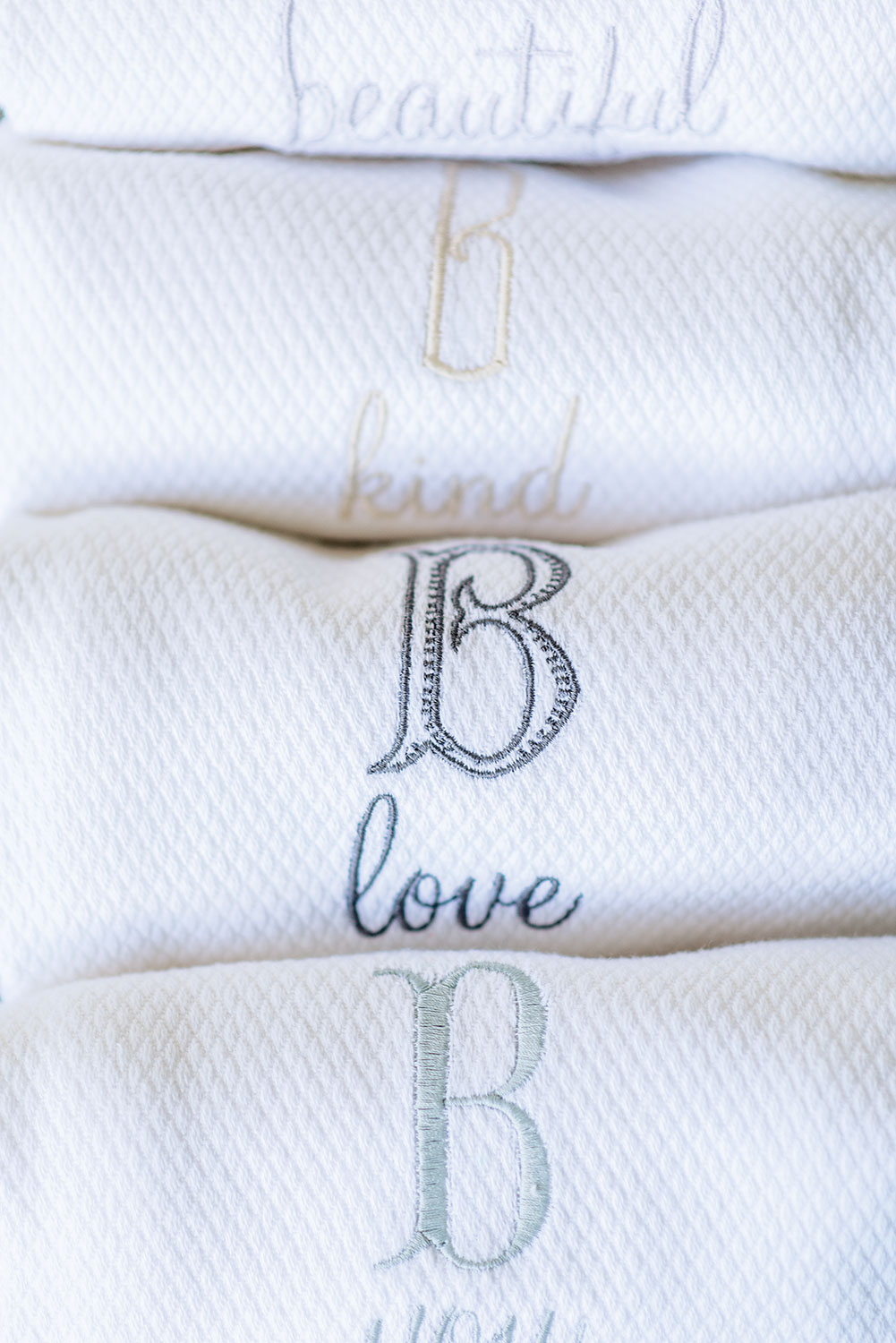 Linen towels in the powder room were embroidered with adjectives that describe the birthday girl, Birgitta Williamson, known as “B” to her family and close friends. 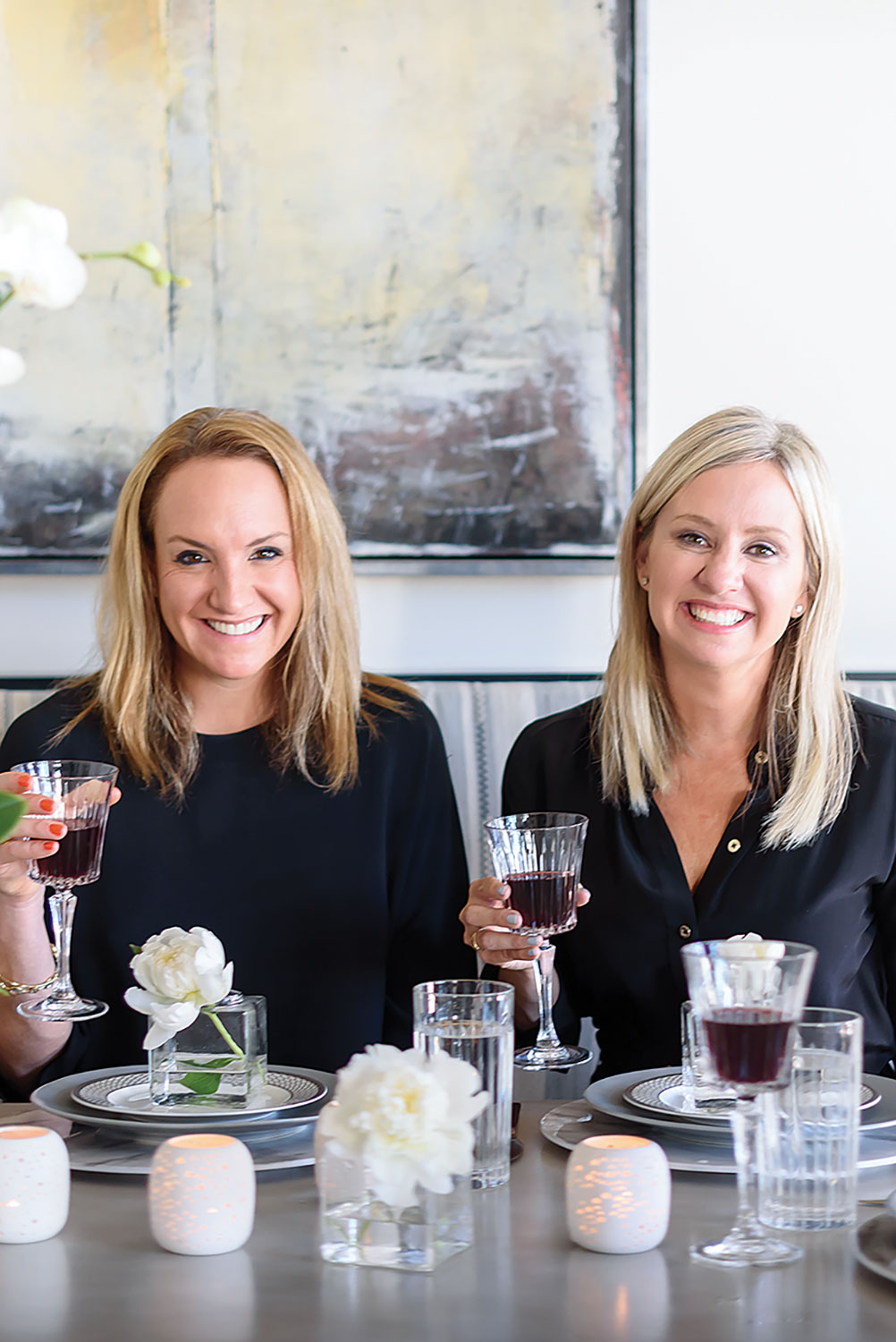