Son of the Irish Soil

In a career spanning more than 40 years, designer Arthur Shackleton has nurtured many of the Emerald Isle’s botanical gems 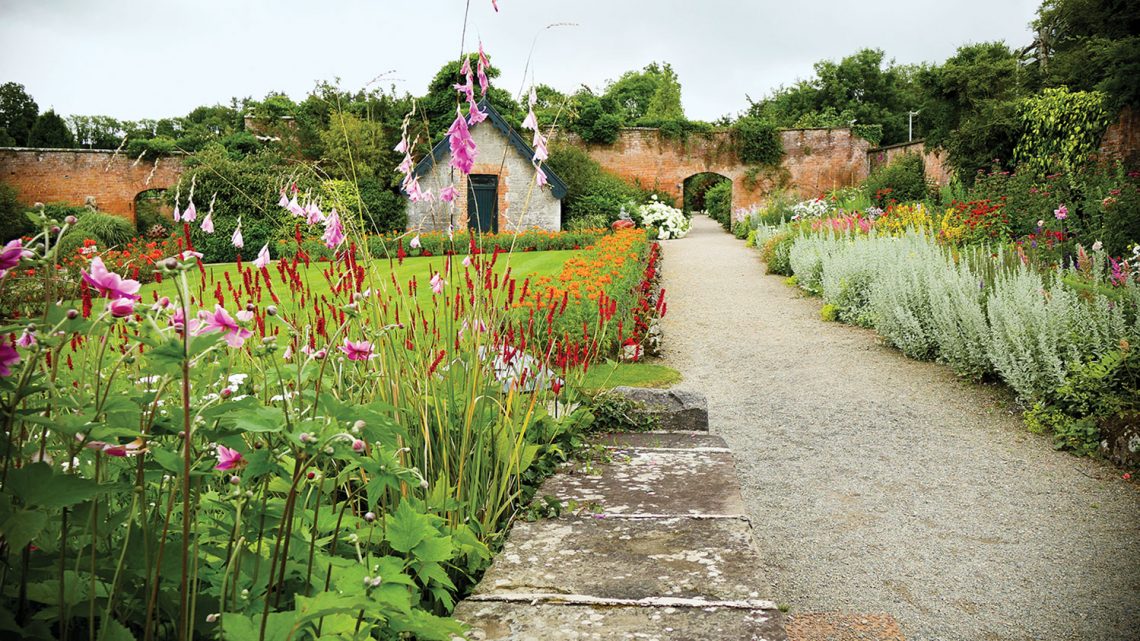 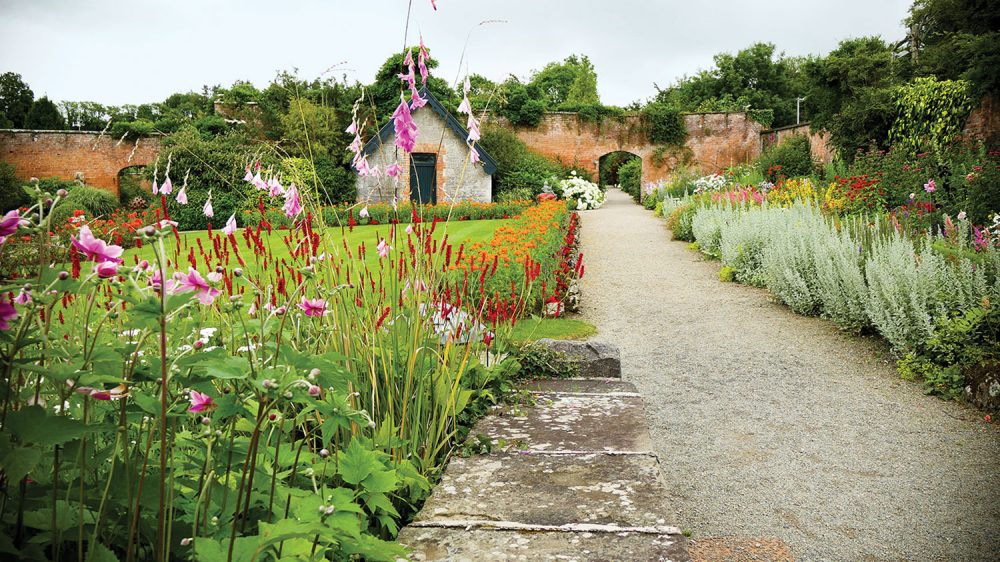 In the walled garden at Dromoland Castle, borders brim with flowers. Red Persicaria amplexicaule and pink Anemone hupehensis stand out in the foreground.

Irish designer Arthur Shackleton grew up in the garden, learning from one of the best—his father, David Shackleton, an internationally known plantsman. Located next to the family’s Georgian house at Beech Park in Clonsilla (west Dublin), David’s acre-and-a-half walled garden was a cornucopia of rare and unusual plants and the largest private collection in Ireland.

For young Arthur, it was a living library, “where I spent many happy hours working alongside my father,” he says. 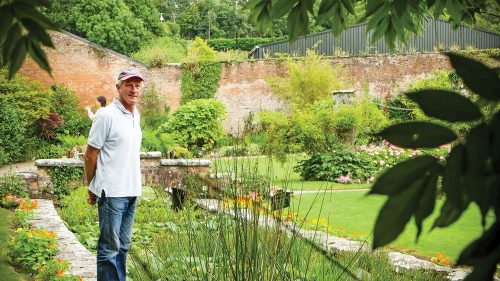 Arthur Shackleton in the walled garden at Dromoland, which is now a hotel.

“David didn’t suffer fools,” recalls Jim Reynolds, the esteemed landscape designer who restored and refreshed the grounds of Ballyfin, a Regency mansion turned into one of Ireland’s grandest country hotels.

As a young man, when Reynolds first met the elder Shackleton and they walked around the garden, he feared he was being tested and found wanting. “But at the end of my tour, he smiled and invited me in for a drink, so I knew I’d passed,” says Reynolds, who became a friend to both David and Arthur. 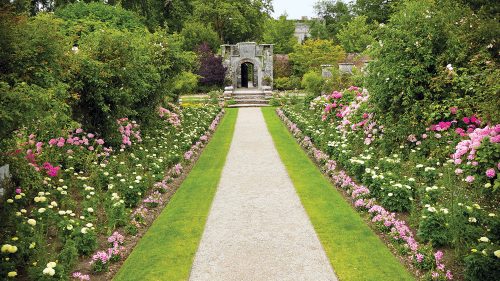 Roses flank a central path in a garden at Dromoland Castle, visible behind the wall.

Arthur agrees. “My father could be very intimidating,” he says. “But we got on well. I was a lot like him, and we shared a passion for plants.”

As Reynolds observes, “Arthur inherited his father’s gift for gardening. And he’s designed many fine gardens.” More rooted in place than their relative Ernest Shackleton, the famed polar explorer, David and Arthur stayed more local, journeying through the most impressive gardens in the British Isles. 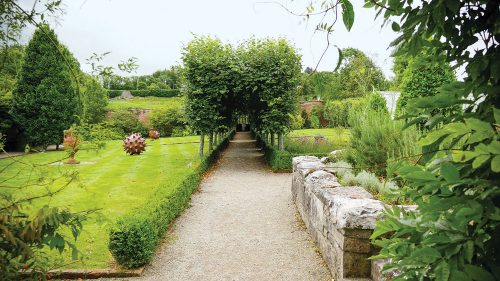 “My father knew all the leading lights of the gardening world, and I traveled with him,” Arthur recalls. “I would meet these amazing people and learn from them as well as him. It was a great education.”

Arthur supplemented that education with several years spent working in the nursery at Mount Congreve, an estate near Waterford with a renowned garden, now owned by the Irish government and open to the public. He also cut his teeth doing design work for world-class Irish thoroughbred farms, including Coolmore Stud and Kildangan Stud. 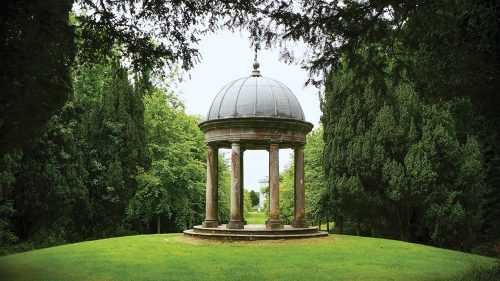 The Temple of Mercury at Dromoland, erected in the 1700s by Sir Edward O’Brien atop the grave of a prized racehorse.

“These were sprawling, beautiful properties,” he says. “I gave them more structure—allées and copses of specimen trees; hedges of hawthorn, beech, holly, and other natives; beds around the buildings—while staying in harmony with the larger landscape.” 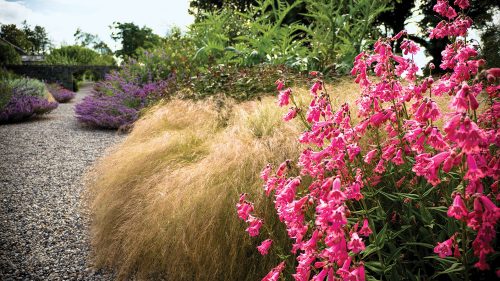 Borders of pink penstemon and Mexican feather grass trim hedges at the Grange, a period house located in County Laois.

Over time, the young Shackleton gained a knack for attracting posh, strong-willed clients (such as Andrew Lloyd Webber and Ryanair founder Tony Ryan) and winning them over with his ideas. The designer proved adept at reviving and improving gardens that dated to the 18th century and beyond, often with strategic tree plantings and long, lush herbaceous borders.

He helped Lady Olda Fitzgerald enhance the 15-acre pleasure grounds of Glin Castle on the Shannon Estuary and helped restore the gardens at Castletown Cox, a fine Palladian manor, for then owners Brian de Breffny, a self-styled baron, and his wife, Ulli. Additional career capstones include his extensive work at the gardens of Dromoland and Ashford Castles, now both luxury hotels. 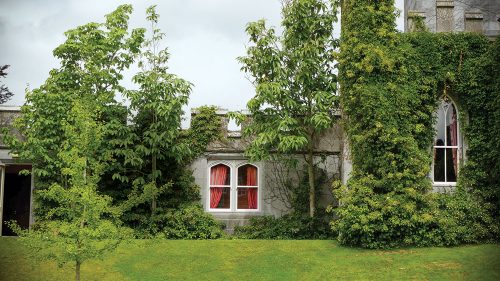 Arthur Shackleton revamped the grounds of Ashford, an 800-year-old castle in Cong County.

“Arthur is a gardener through and through, possibly with sap, rather than blood, running in his veins,” observes Jane Powers, author of The Irish Garden. “He seems to understand the needs of plants in a profound way that comes from decades of intimacy with them. His designs may nod to the Arts and Crafts era—with strong structure and abundant borders—but his plant choices are more modern and dynamic.”

Plants from subarctic to subtropical thrive in Irish gardens. “Thanks to a climate tempered by the Gulf Stream, Ireland in general is a fine spot for making gardens—lovely soft climate, good soil, plenty of rain,” Author says. “But you have to know which plants work where. And you have to get the structure right first—plantings are the icing on the cake.” 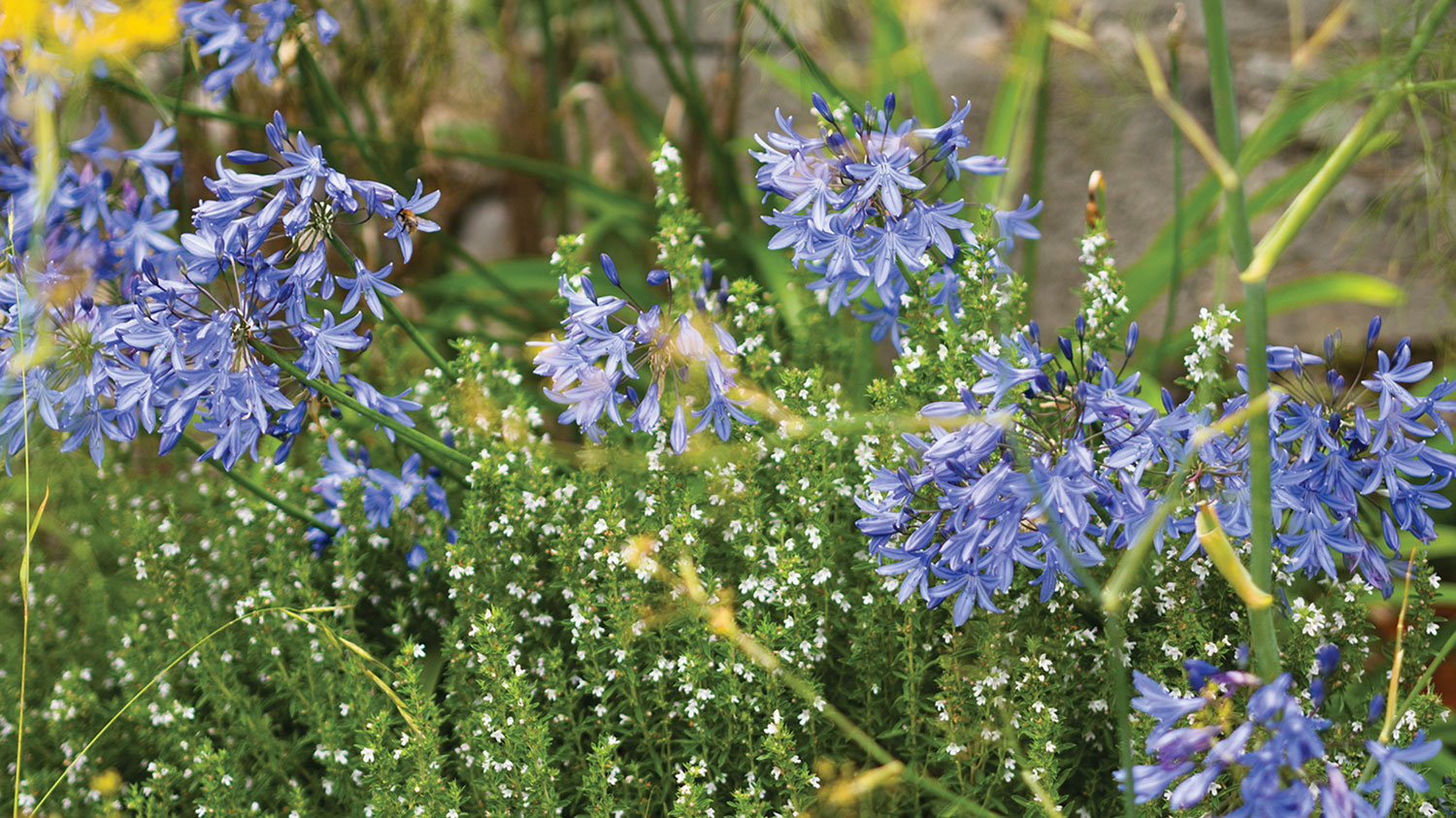 One of Shackleton’s most accessible works is the garden behind Butler House hotel in Kilkenny, which doubles as a public park.

A circular water feature is ringed by large stone blocks that serve as seats. The stones are inscribed with letters that spell nothing, a code without a key, until you learn they are fragments of Nelson’s Pillar, the Dublin monument to English admiral Horatio Nelson, which was toppled by an IRA bomb in 1966. In this serene spot, they stand as distant echoes of Ireland’s fraught history. 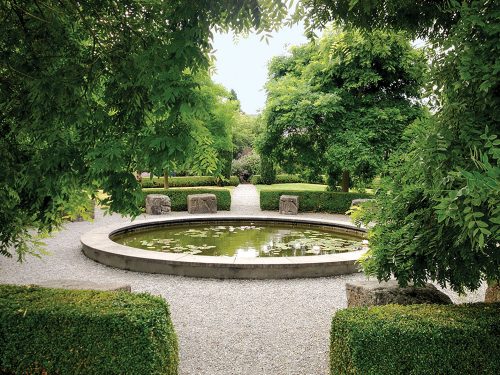 In the Butler House garden in the town of Kilkenny, paths radiate like spokes from a circular pool ringed by a low hedge of Sophora japonica and cryptic stone blocks that serve as seats. Inscribed with letters, the blocks are remnants of an IRA-bombed Dublin monument to England’s Admiral Horatio Nelson.

At Fruitlawn, the home in County Laois he shares with his wife, artist Carol Booth, Arthur transformed a derelict farm into a green gem, a 1-acre walled garden with many of his favorite features—large perennial borders; a hornbeam tunnel; a circular pool; huge yew hedges; an extensive vegetable garden; and unusual plants from his father’s garden, Beech Park (which, now owned and restored by the local council, will open to the public this summer). 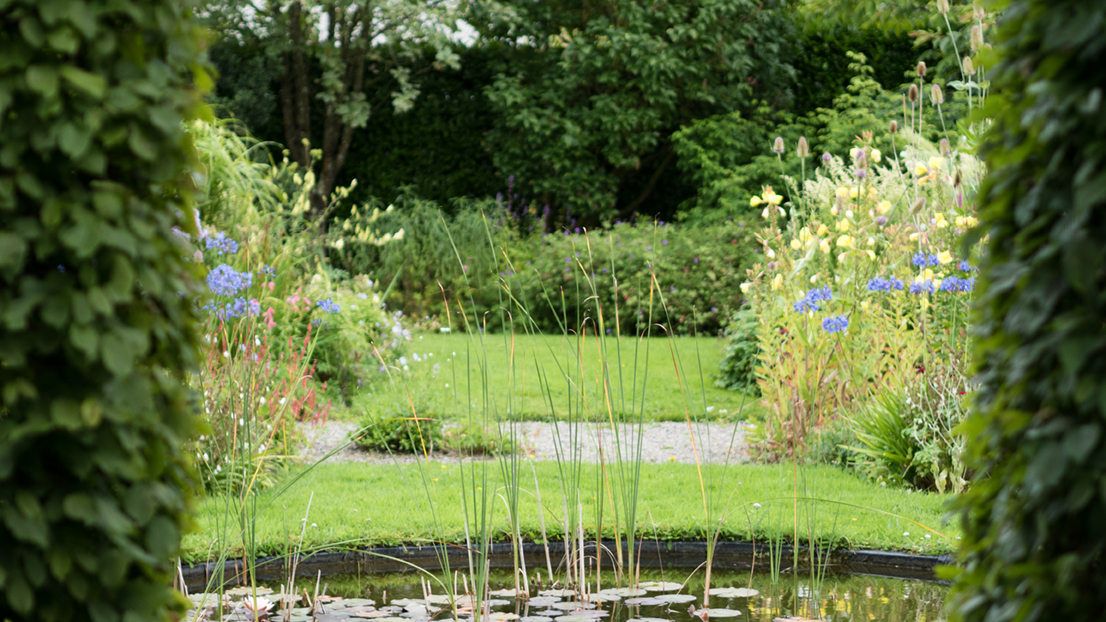 A garden pool at Fruitlawn

After so many decades in the business, Shackleton is not slowing down. His latest project—revamping the grounds of Killua Castle in County Westmeath—may be one of his favorite yet.

“It will be the most amazing place when it is complete!” he says. “The main thing at the end of the day is that the clients are happy and get the garden they dreamed of.” 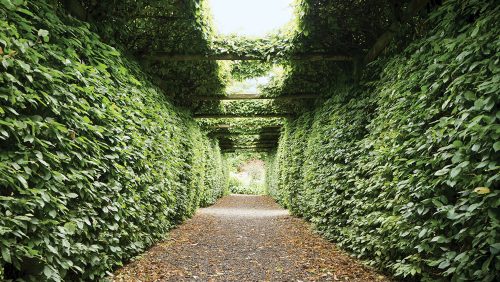 A hornbeam tunnel, also at Fruitlawn