Conceived for the pleasure of a king, with grand avenues, fantastical water features, and rows and rows of blooms, the gardens of Versailles continue to reign supreme 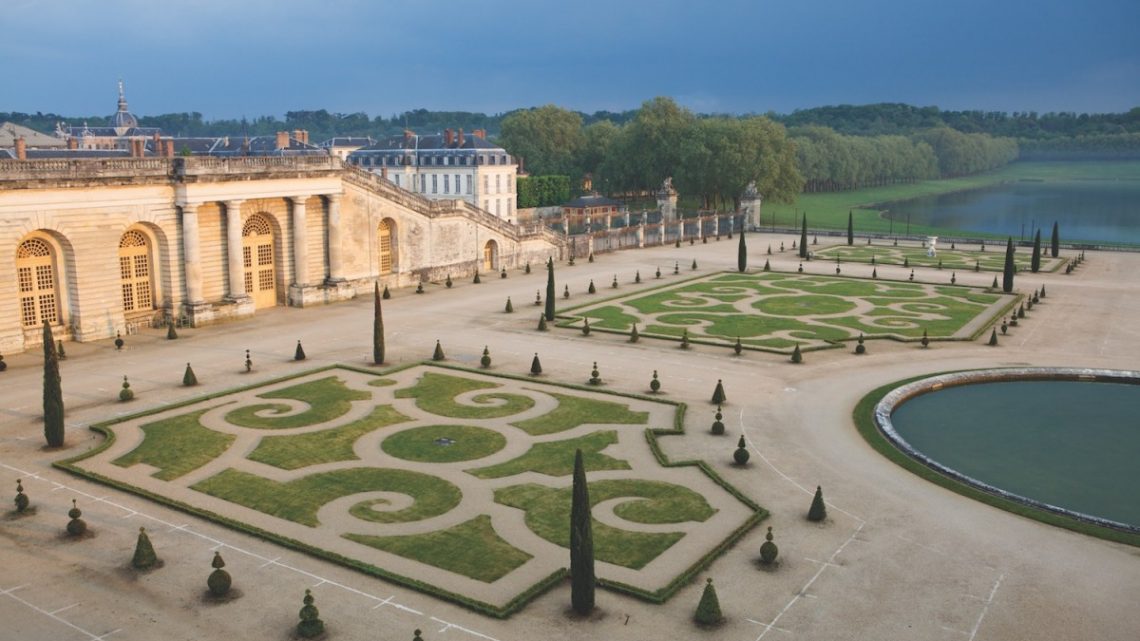 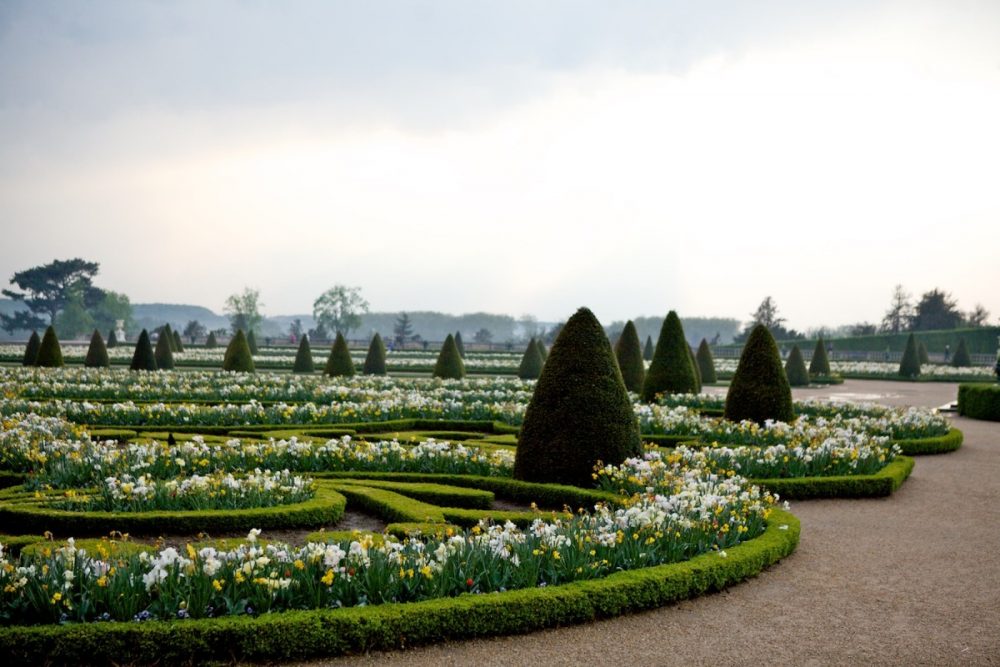 The South Parterre of the gardens of Versailles, known as the Flower Parterre, includes espaliered hedges, manicured trees, and spring-blooming daffodils and narcissus.

More than 300 years ago, the rulers of France erected the Château de Versailles as a monument to their imperial dominion. Set on 19,262 acres in the countryside 16 miles outside Paris, Versailles—with its grand palace and expansive gardens—is larger than Manhattan. It’s even larger than Paris. 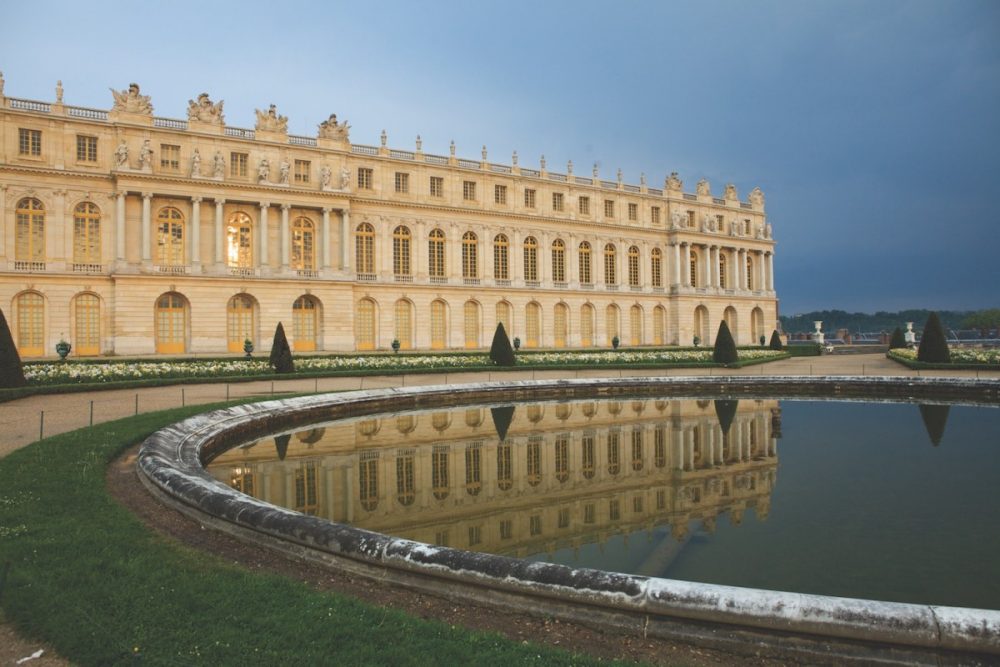 After a threat of an uprising while he was living at the Louvre, King Louis XIV looked to establish a residence far removed from central Paris. The palace he built of gilded, marble clad, and mirrored rooms was large enough to accommodate his entire government. The royal stables were often mistaken for the castle entry and held 2,000 horses. And while the palace continues to fascinate for its vastness, excessive decoration, and curious coldness, it is the gardens that speak most profoundly to visitors. It is there, strolling the wide avenues leading down from the palace to the Grand Canal, or especially, touring Marie Antoinette’s Hamlet—her refuge from the rigors of court life—that one can actually imagine how it might have felt to be the human beings who lived in such an unnaturally ornate environment. 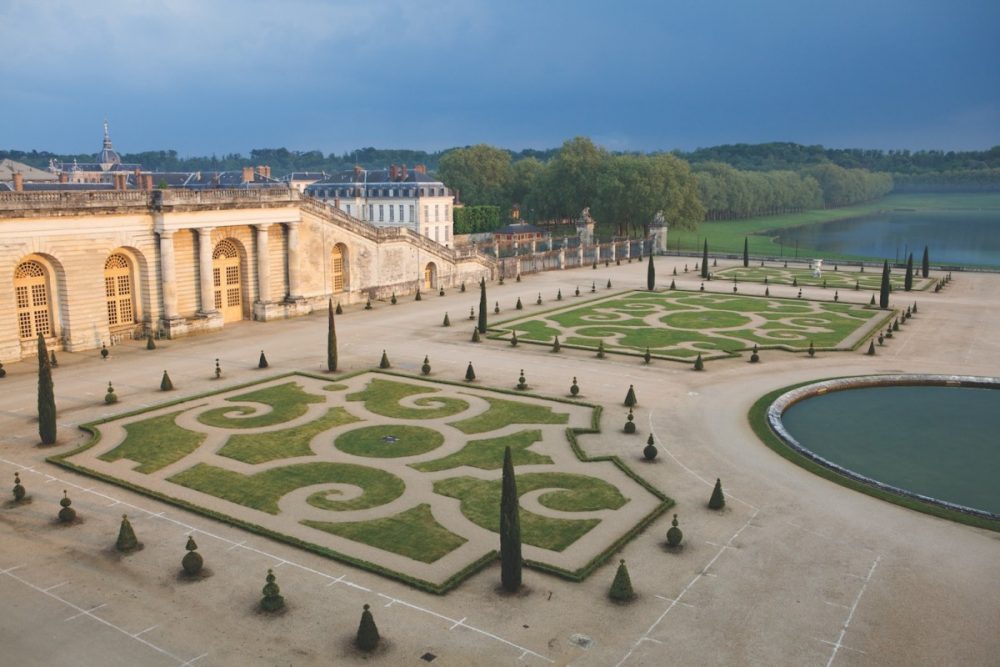 Versailles’ Orangerie, designed by Jules Hardouin-Mansart, looks out on four quadrants of parterres de broderie and boasts trees from Spain, Portugal, and Italy.

The site of the Château de Versailles was originally a simple hunting pavilion built for King Louis XIII. But it was his successor, the Sun King (Louis XIV), who decided to enlist a talented trio—landscape designer André Le Nôtre, architect Louis Le Vau, and painter Charles Le Brun—to turn the modest palace into the seat of his large royal court. Though the buildings and interiors continued to evolve over the reigns of Louis XV and XVI, the gardens of Versailles were largely established during this early period. Architect Jules Hardouin-Mansart continued Le Nôtre’s work after his death and created some of the gardens’ most stunning features, like the Orangerie and the groves with their jetting fountains. 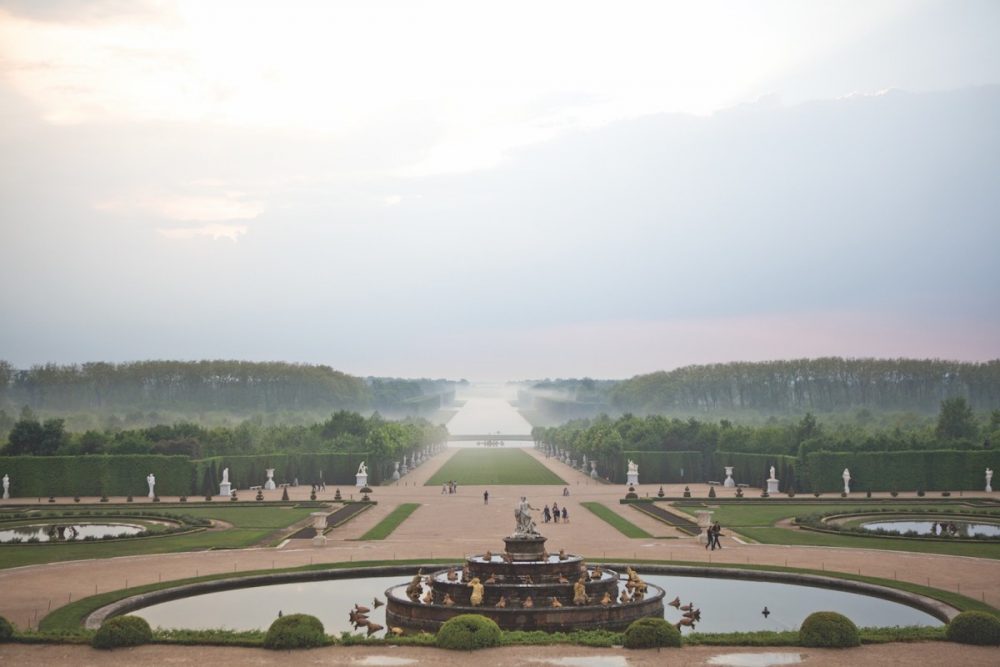 The Latona Fountain overlooks the Grand Canal and the Royal Walk, also called the Green Carpet.

The Sun King considered water features an integral part of the garden design, and they feature prominently as focal points in the landscape. Though Louis XV made few changes to the grounds, his son, Louis XVI (of the unfortunate run-in with the guillotine), replanted much of the gardens in 1775. As an expression of the imperial majesty of the king of France, Versailles certainly delivers. The buildings overwhelm the senses with their size, design, and decoration. But the gardens also convey the might of France, through their taming of unruly nature to the king’s desire. The design harnesses water, earth, flowers, and trees to create vistas that stretch all the way to the horizon and seem to encompass the entire world in the orderly procession of pathways, ponds, and hedges. 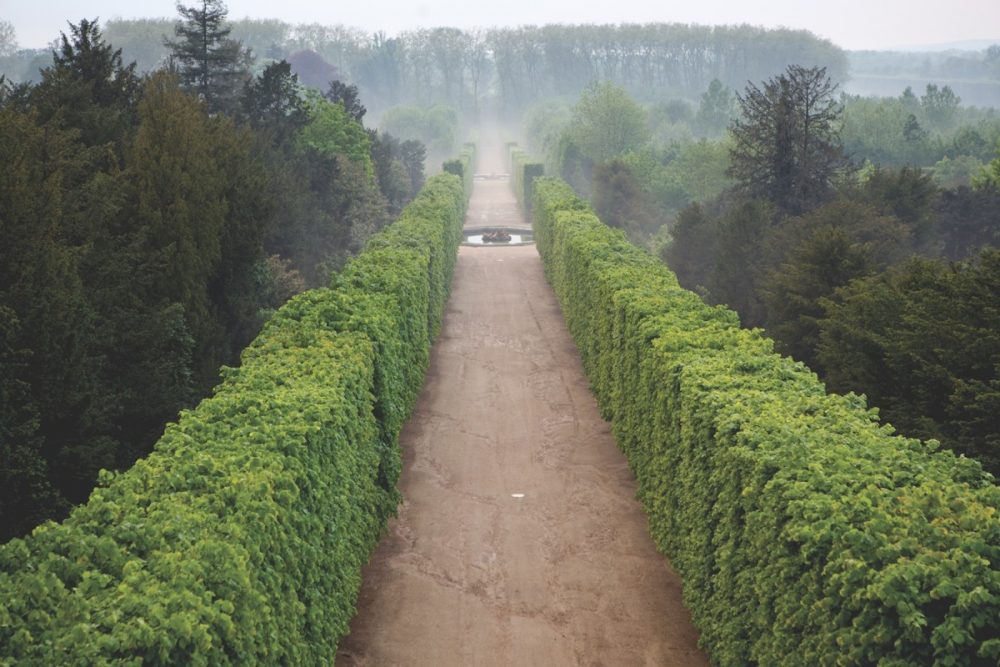 A hedged-in path leads to the Flora Fountain, named for the Roman goddess of flowers.

Off these grand avenues, the garden breaks into groves. These outdoor living rooms, gated and walled by greenery or trellises, were built for the court to use as outdoor party rooms for musical entertainment and dancing. Spectacular fountains and statuary decorate the groves, giving each of them a distinct personality. 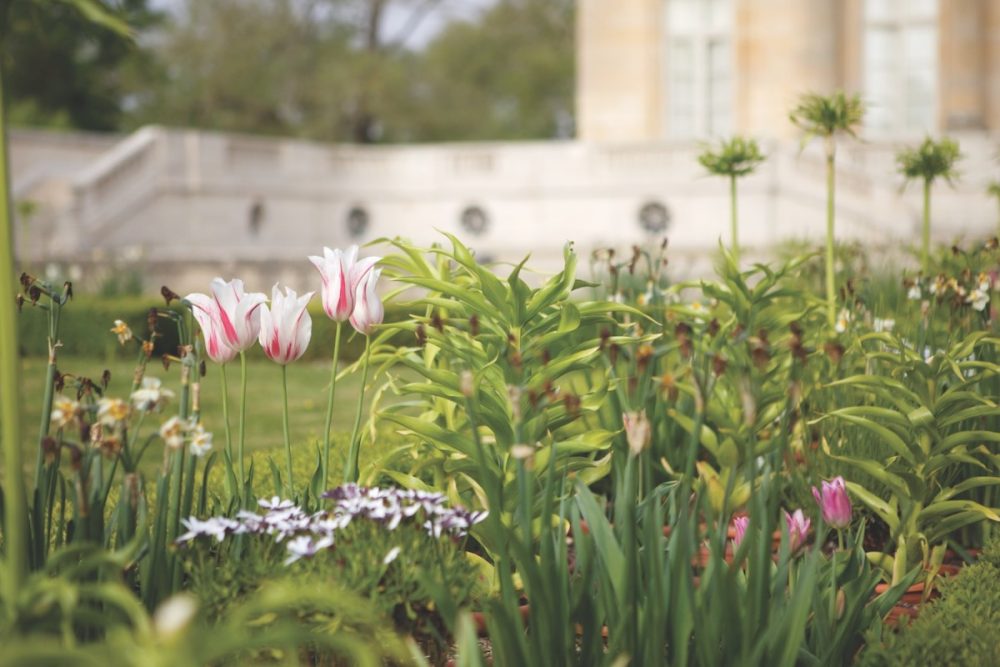 Two of the most popular areas of Versailles are the Petit Trianon, Marie-Antoinette’s smaller, private palace, and her pastoral bolt-hole, the Hamlet, which the young queen built when the puffery and intrigue of court life became too much to bear. Antiques dealer and Francophile Dinah Toro says, “The palace was hard and glittering; the gardens were the opposite, timeless, and they spoke to the soul. Marie-Antoinette’s areas were the best.” 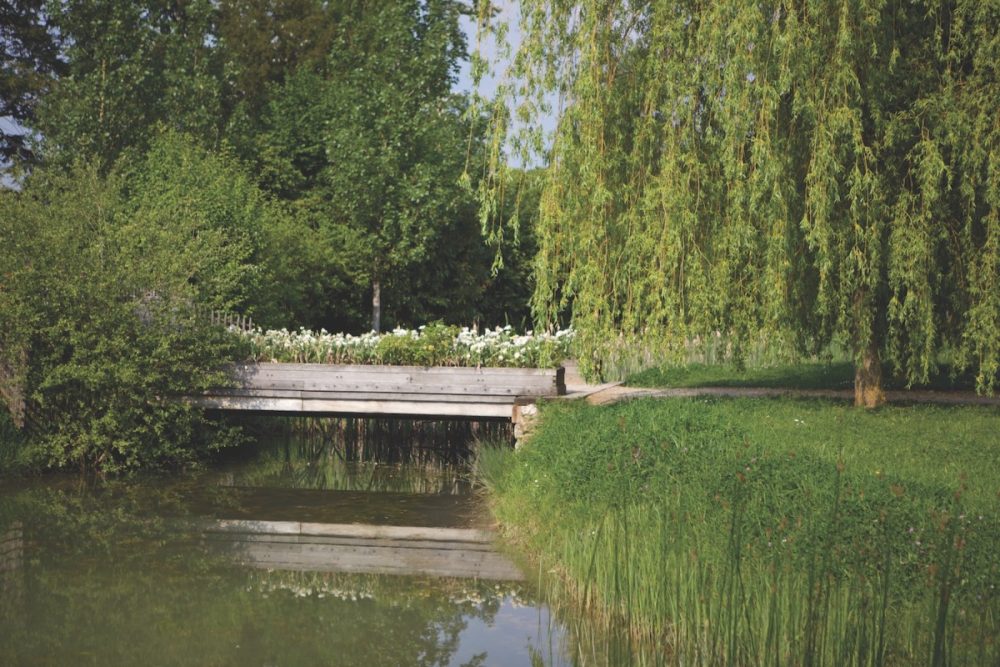 An idyllic scene in the gardens surrounding the Petit Trianon

Petit Trianon’s intimately scaled gardens feel more comfortable to the modern visitor. And her Hamlet is a poignant reminder of Marie-Antoinette’s fatal naivety and frivolity. She envisioned it as a country village on a lake, with thatched-roof huts and working dairies. There she could visit the cows as they were being milked and pick produce from the working farm.

For the movie “Marie-Antoinette,” director Sofia Coppola received permission to film at Versailles. In one scene, after an all-night soirée, Marie-Antoinette and a group of friends run giggling over the broad avenues to watch the sun rise over the Grand Canal. Like young people of any age, they greet the coming day with high spirits and optimism. They appear to own the whole world, exactly as the Sun King had intended. They just didn’t know it wasn’t forever. 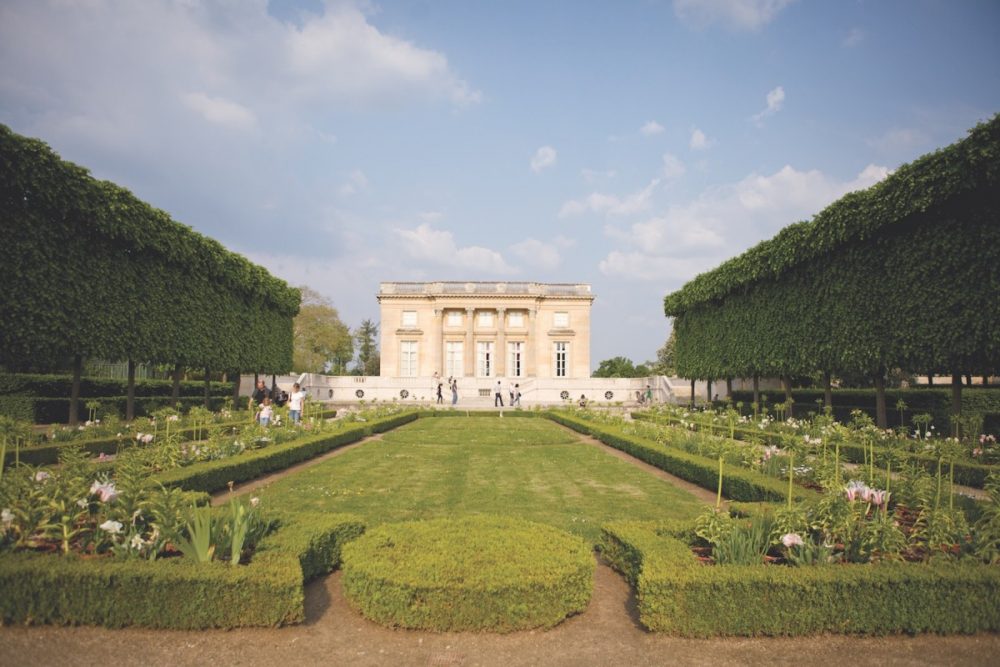 A view of the French Garden and Marie-Antoinette’s private palace, the Petit Trianon