Béatrice Saalburg has what you’d call a creative legacy. As a young girl, she was immersed in a world where art and fashion were close at hand. And she always knew she would be a graphic designer. “I was a lucky child, living in a lively artistic environment. My father, Pierre Colle, was an art dealer specializing in Surrealist paintings, while my mother, Carmen Corcuera, used to work for Christian Dior, a close friend of my parents,” explains Saalburg. “Once my studies were finished, the great poster artist A. M. Cassandre asked me to be his pupil before I attended graphic design school in Basel. I loved my years in Switzerland and was thankful for such a rigorous academic background.”

After art school, Saalburg participated in a succession of stimulating artistic collaborations,including one as a graphic designer for the Olympic Games in Mexico. In 1969, she returned to France and soon became a well-known professor of graphic design at the École nationale supérieure des Arts Décoratifs in Paris, where she taught until she retired in 2003. “During that period, I married the American painter Philippe Saalburg, and we decided to leave Paris and settle in the countryside, about 150 kilometers from the city, in a magnificent region called Le Perche.”

In the 1970s, Le Perche, located in northwestern France, was considered rural with many abandoned structures. “We found a small 17th-century château that we liked very much from the beginning, even though it was almost in ruins,” she says. “It didn’t matter because we thought it was the ideal family house. Our two children were born there, and together with the two kids Philippe had from his first marriage, we made it our home.”

In one of the pavilions of the Château de Maison-Maugis, Saalburg installed her workshop of botanical painting. She refined her technique by studying in London at the Chelsea Physic Garden with artist Anne-Marie Evans. “And everything started again,” she says.

At her studio, Béatrice Saalburg gathers students from all over the world who are eager to learn her famously precise technique. Her botanical workshop has a magical atmosphere that feels suspended in time. Rooms are cozy, ancient fireplaces warm them when days are cold and rainy, and the view of the green, lush garden all around inspires and relaxes the soul. 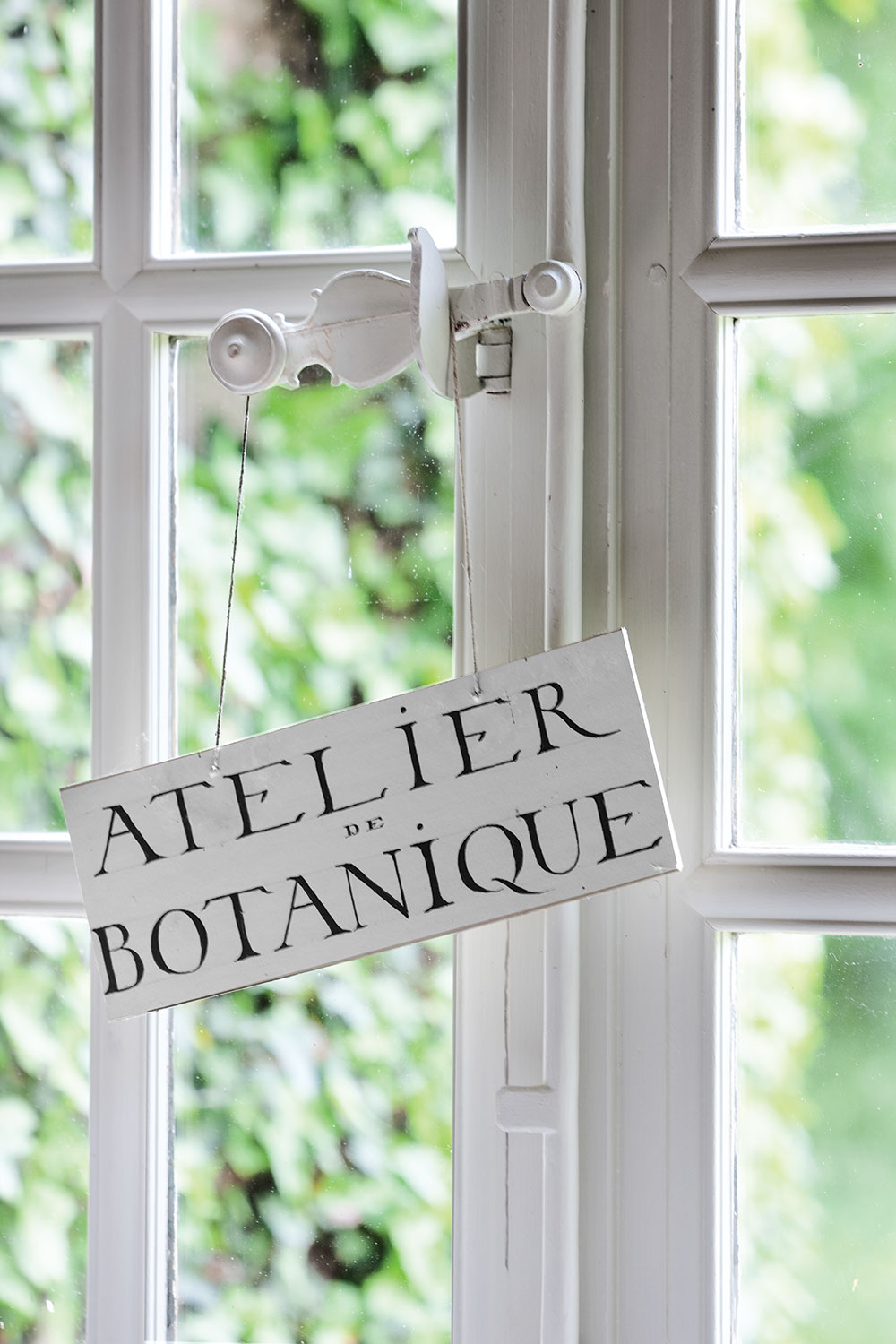 Calligraphy by Catherine Gouny created for the botanical workshop 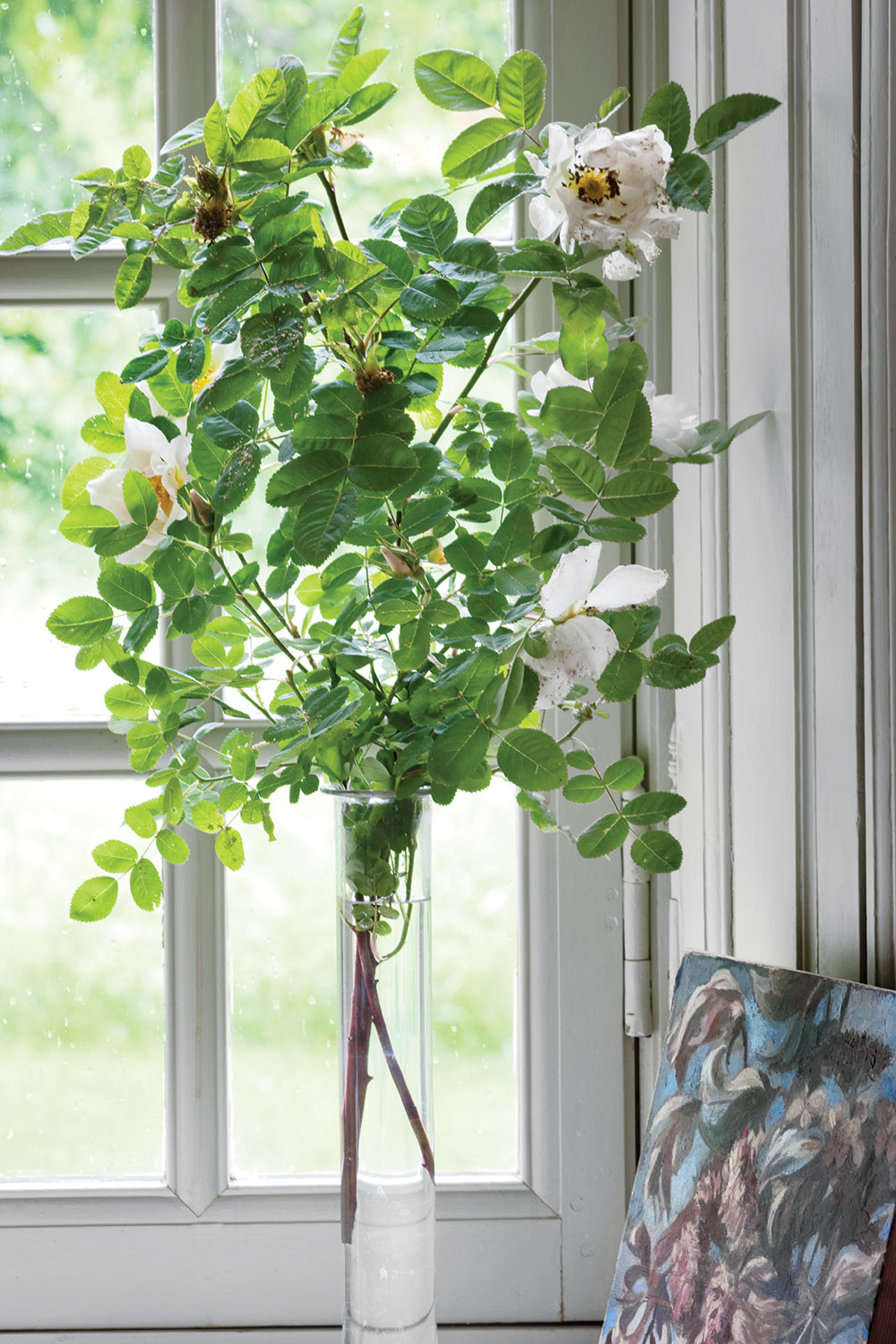 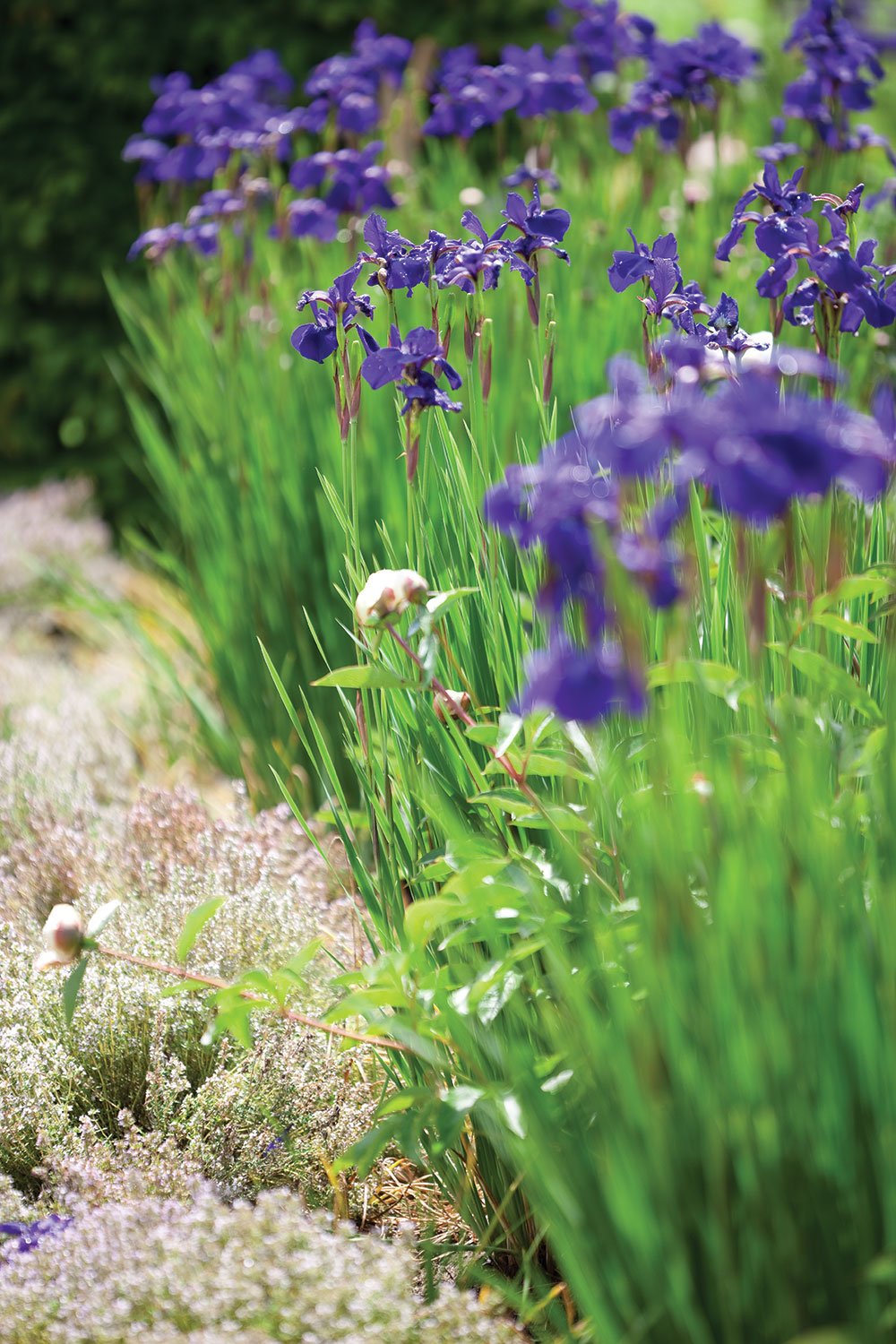 An allée of dark-blue Iris sibirica bordered with thyme 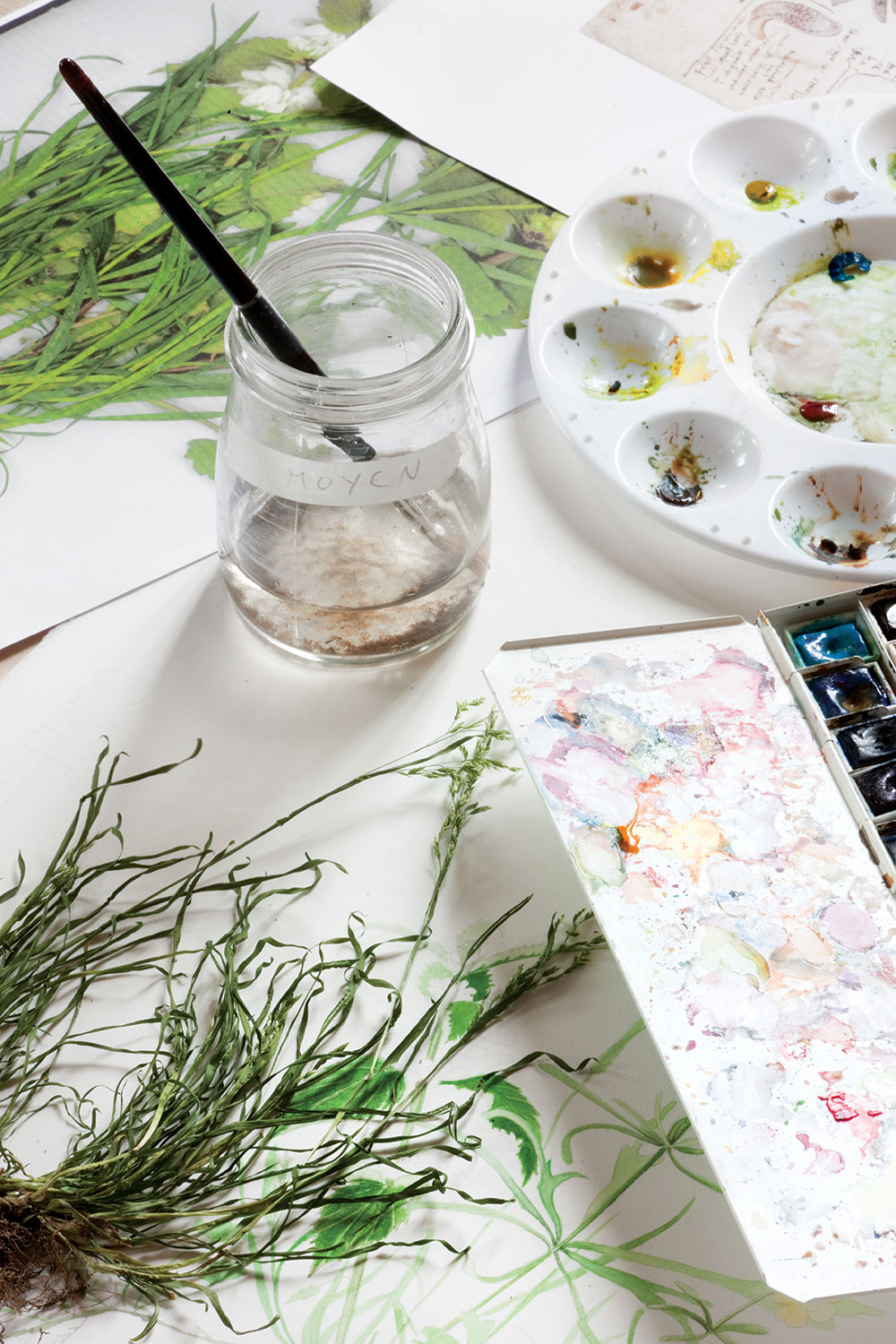 A work space set with colors and palette 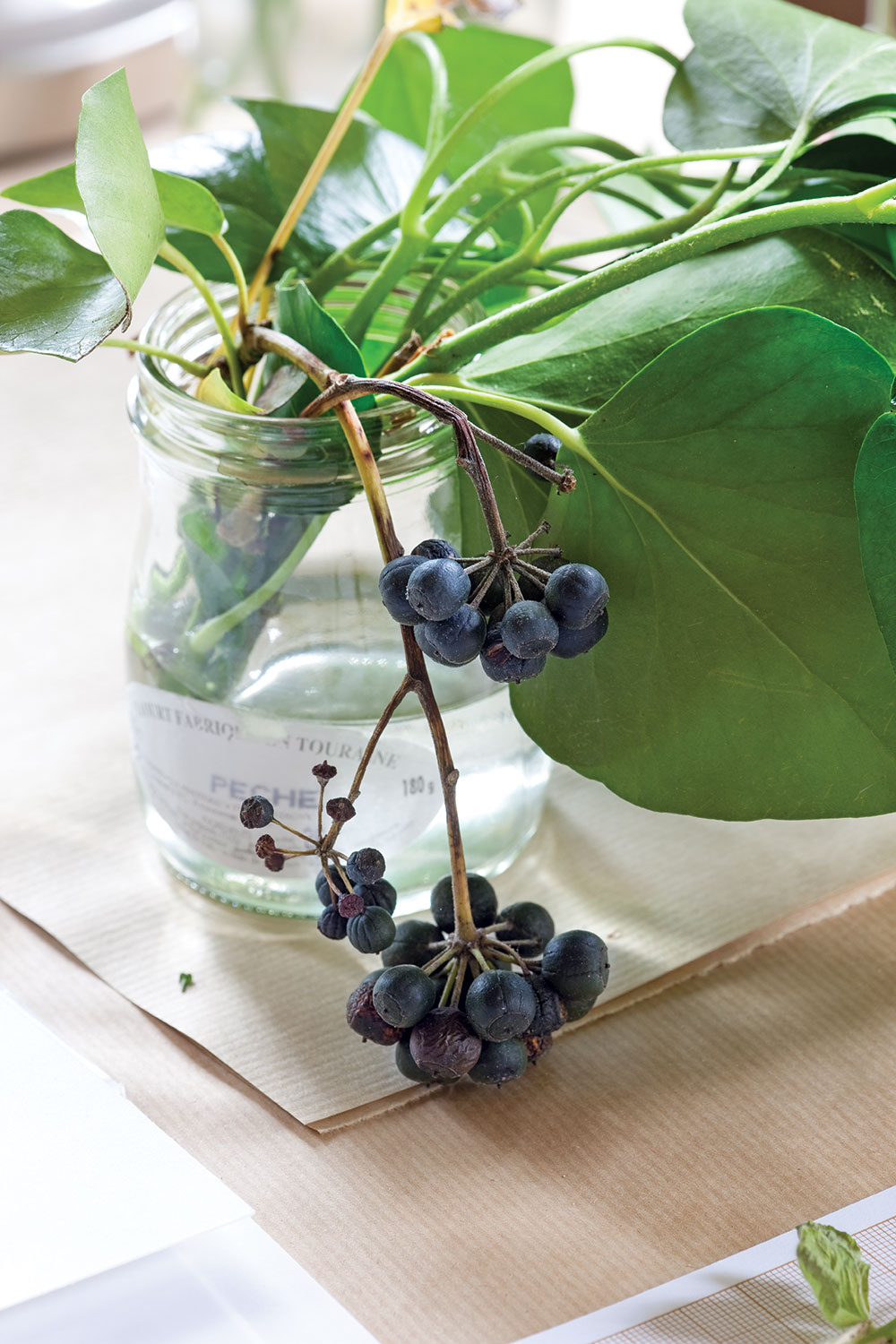 Even simple compositions can spark creativity. 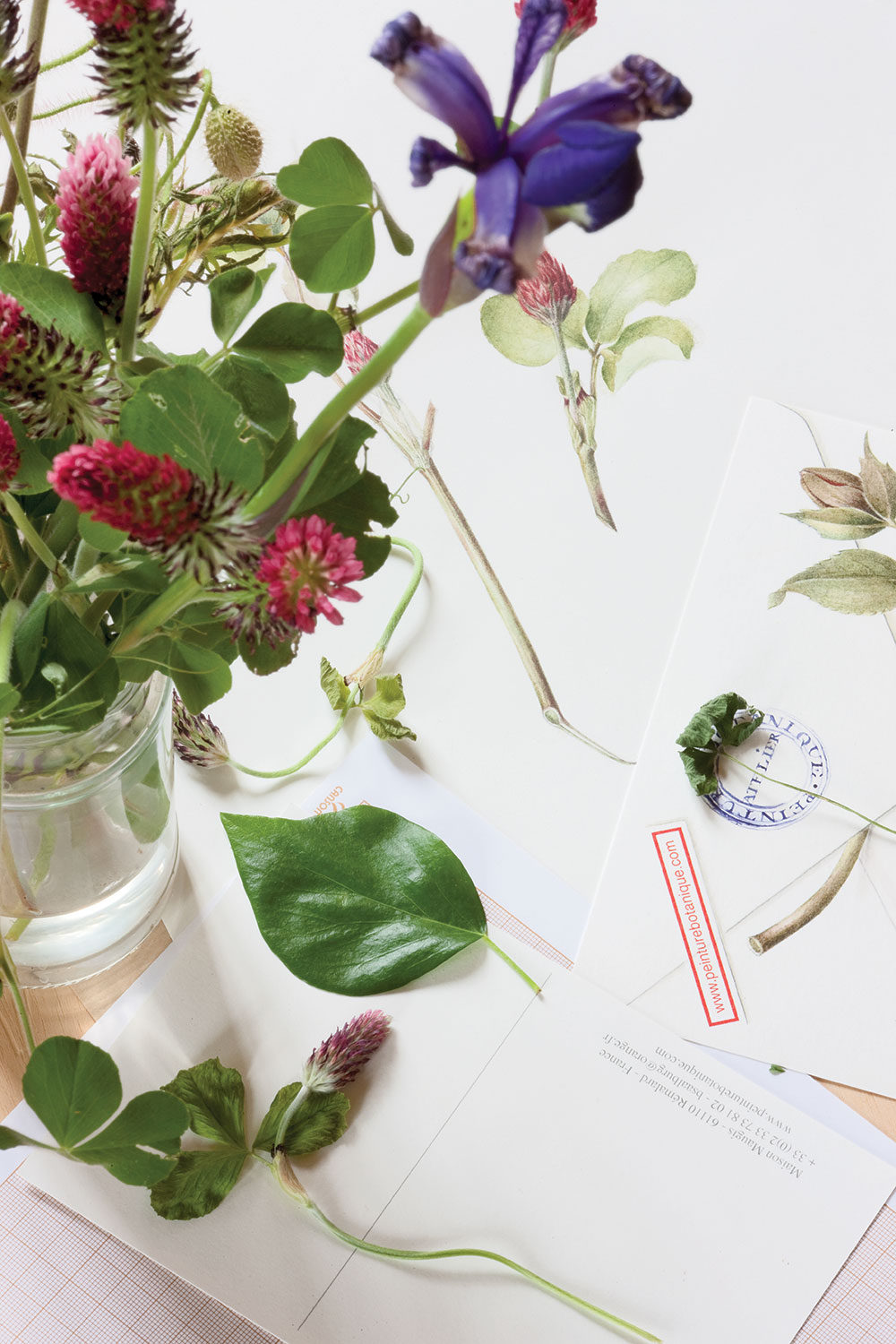 A bouquet of trefoils serves as a subject for students. 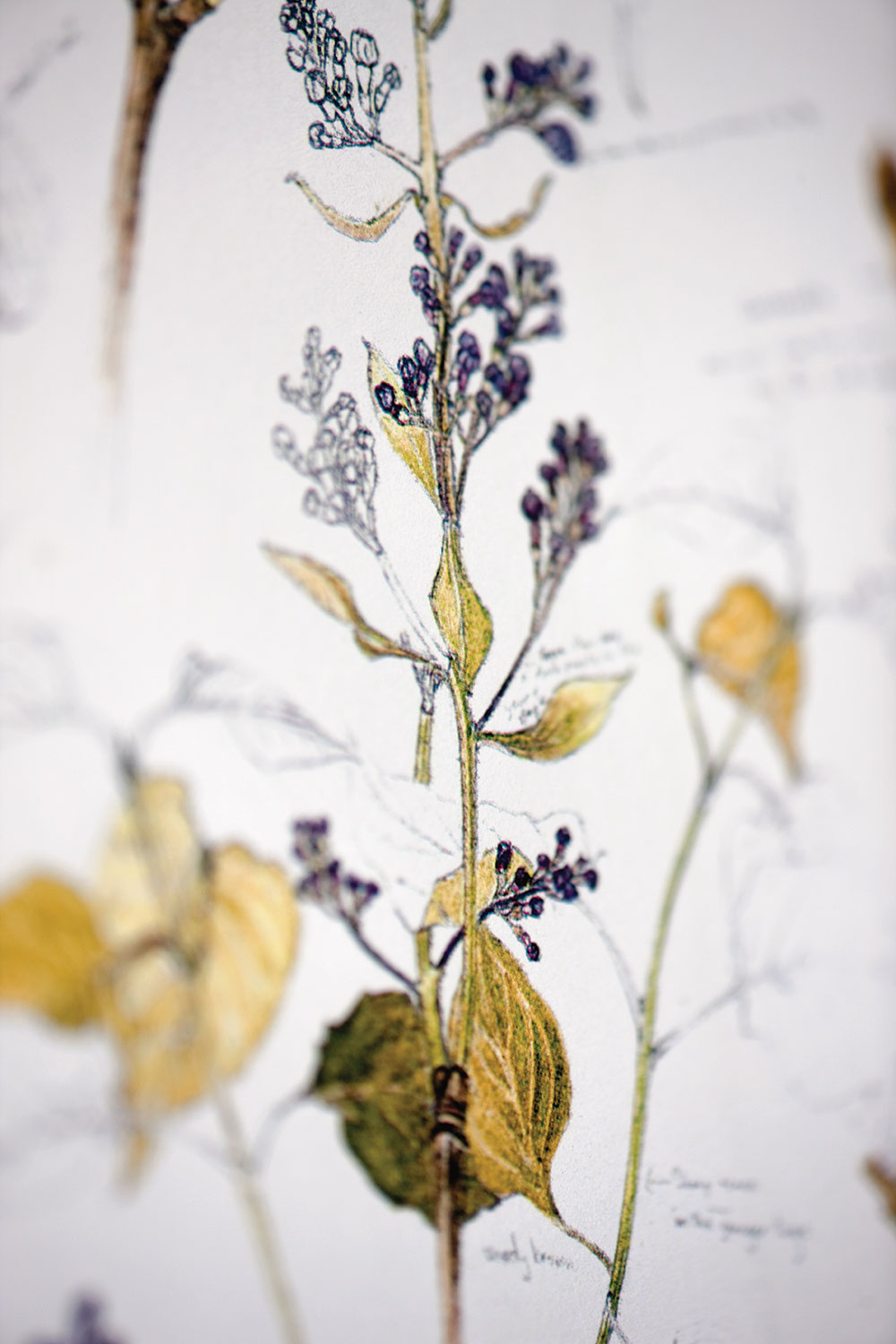 A flowering branch painted with watercolors 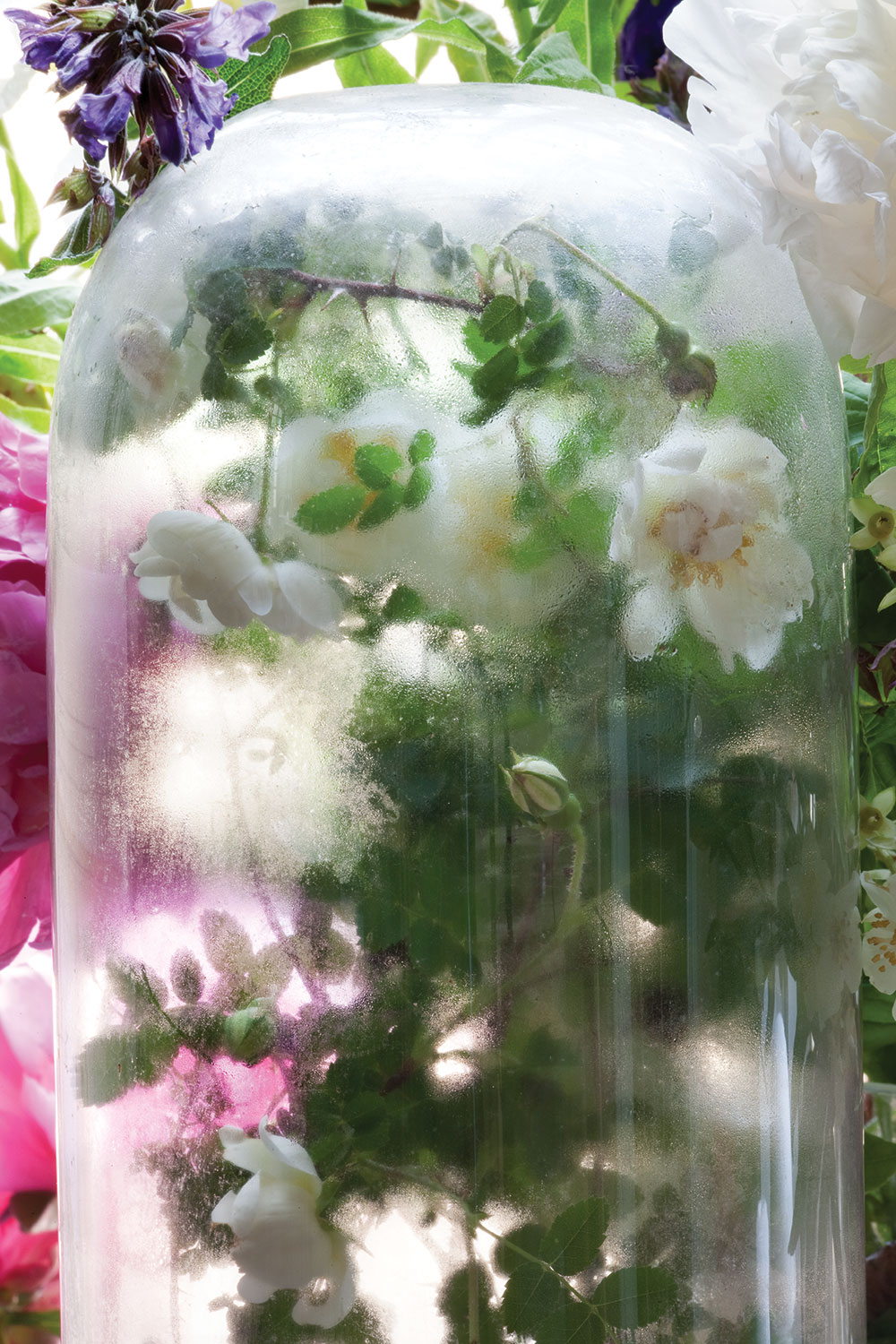 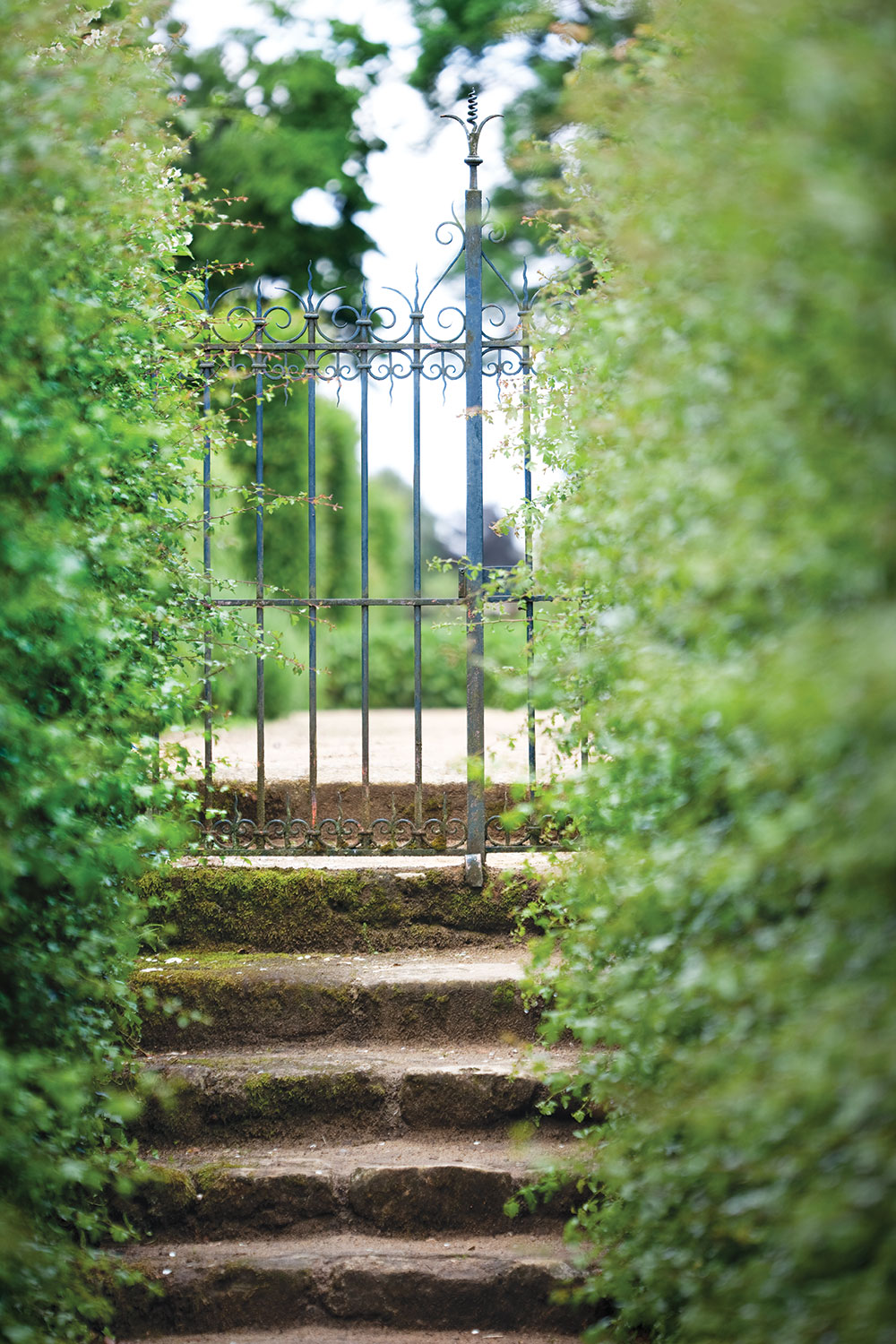 Up the stairs, the gate leads to the vegetable garden, where students can pick ingredients for salads. 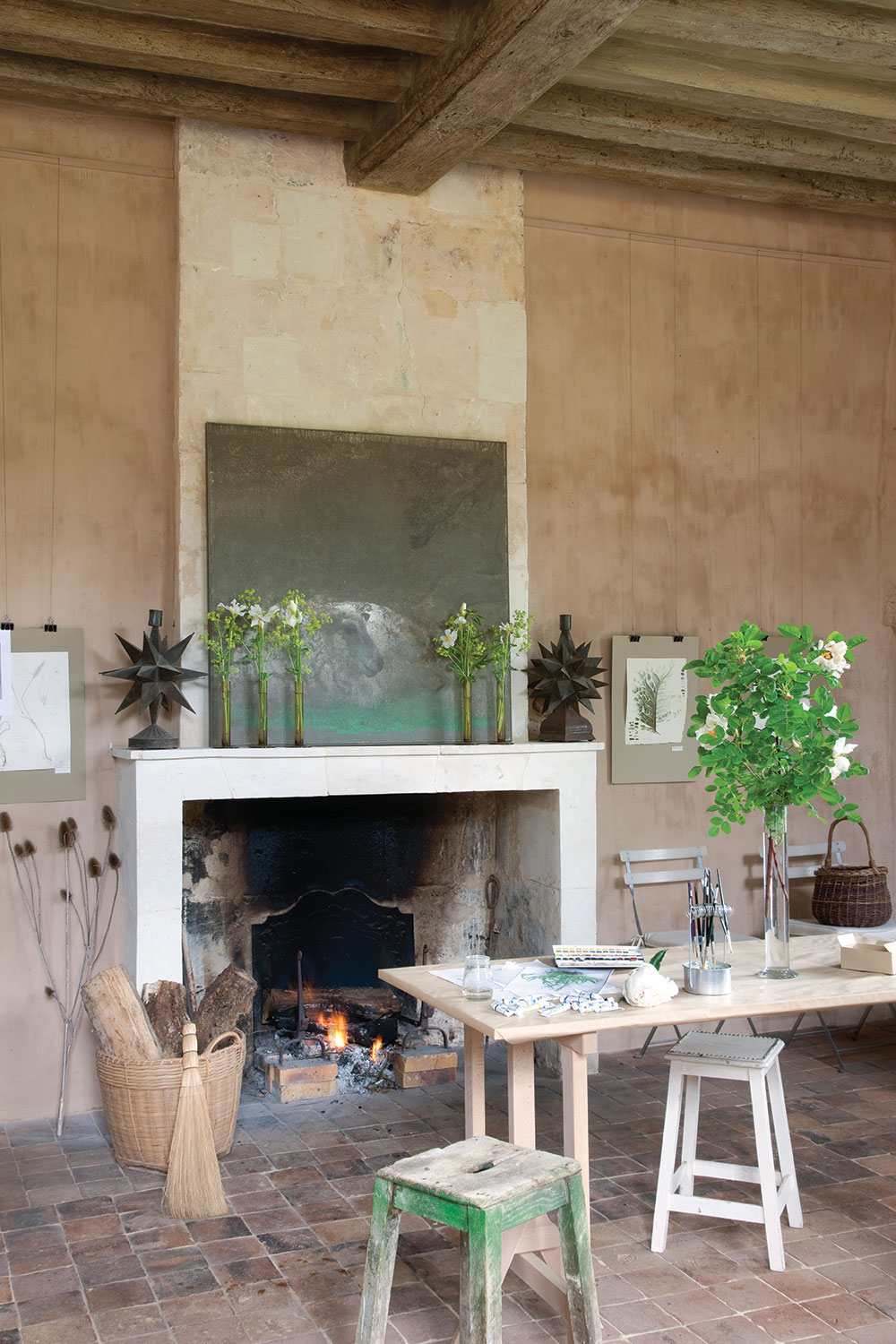 On the mantelpiece, an oil painting by Takayoshi Sakabe depicts a meditative sheep. 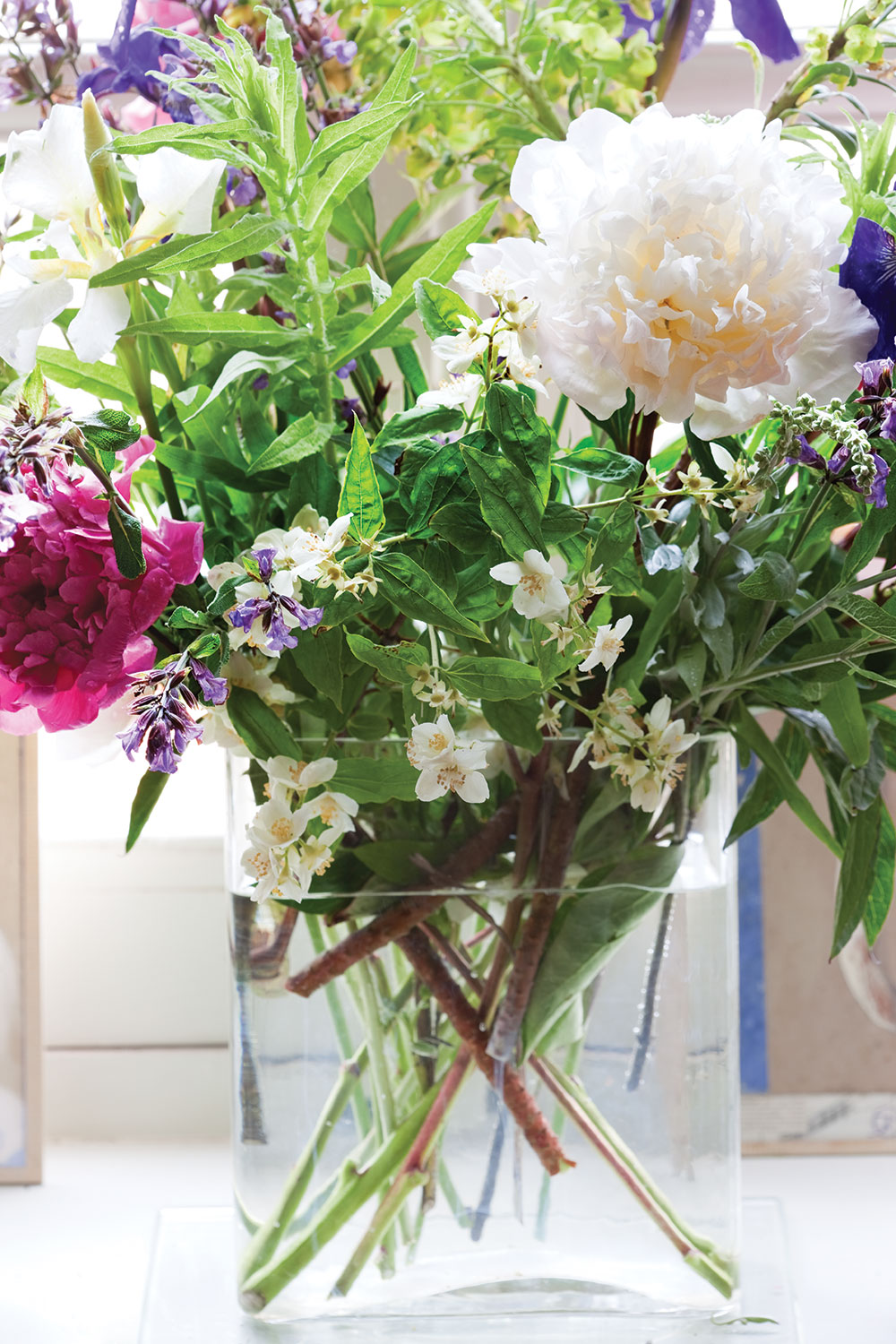 A bouquet of peonies and other spring flowers, including dark-blue and white Iris sibirica 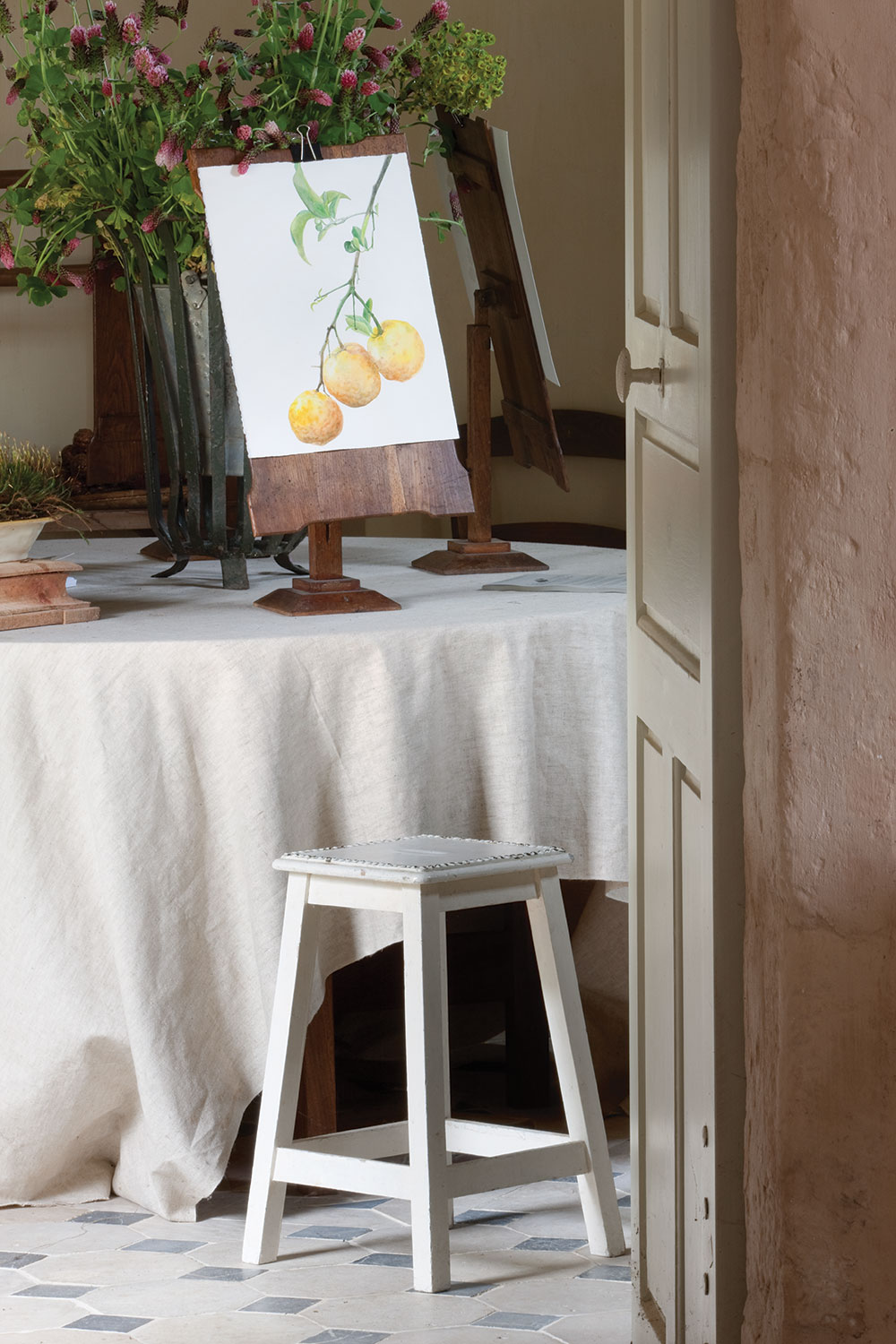 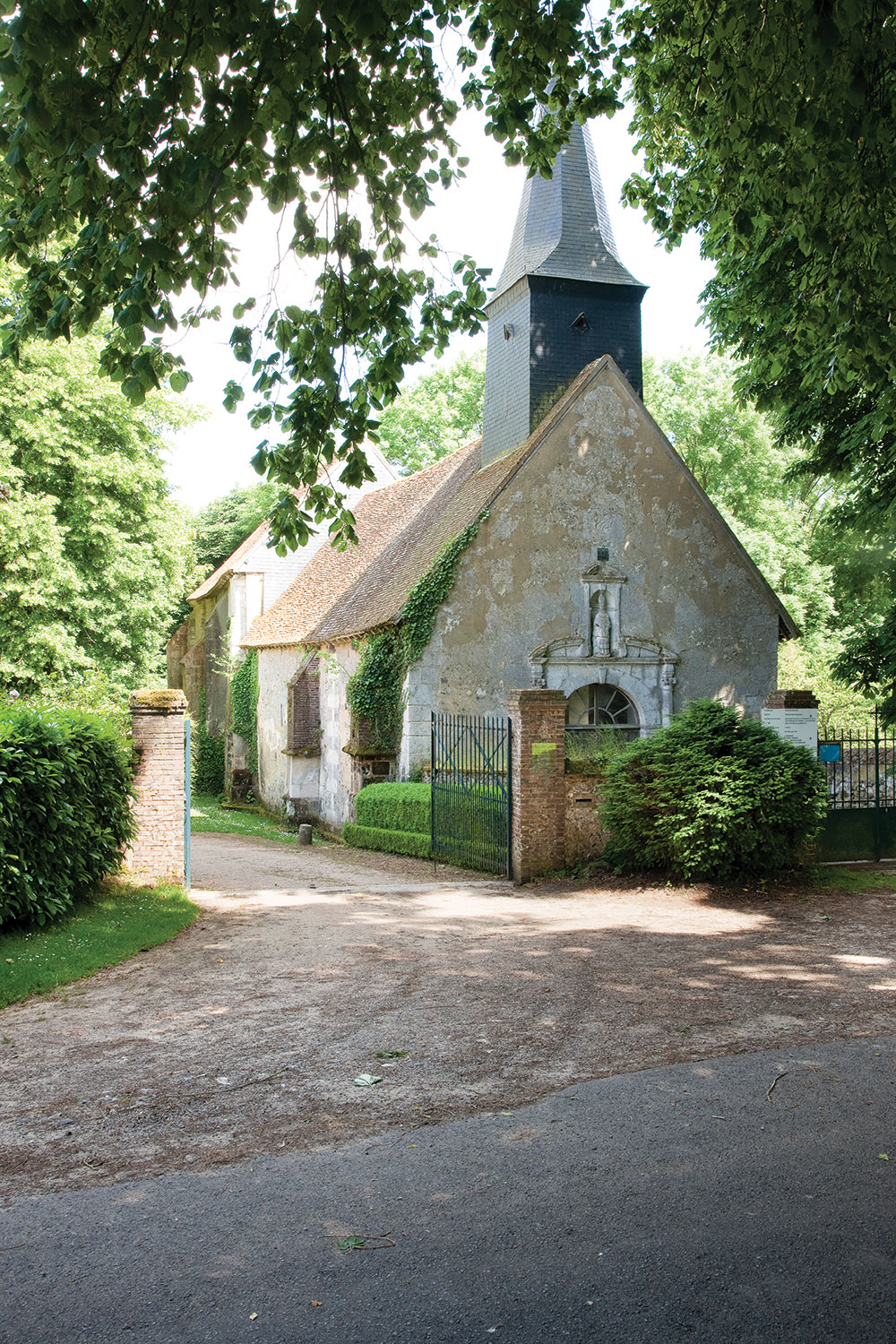 At the end of a double allée of chestnut trees sits a picturesque church where concerts are held in the summer. 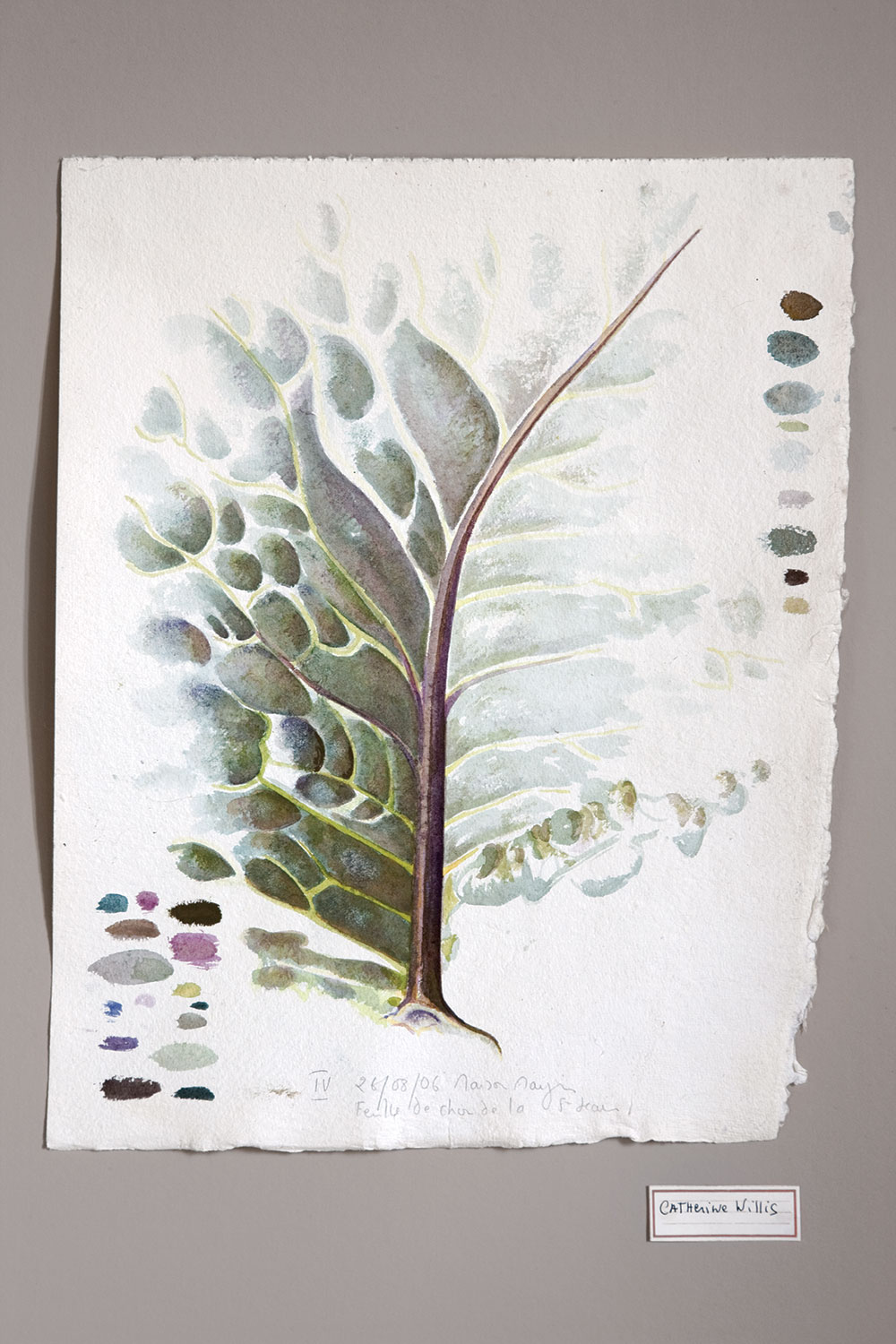 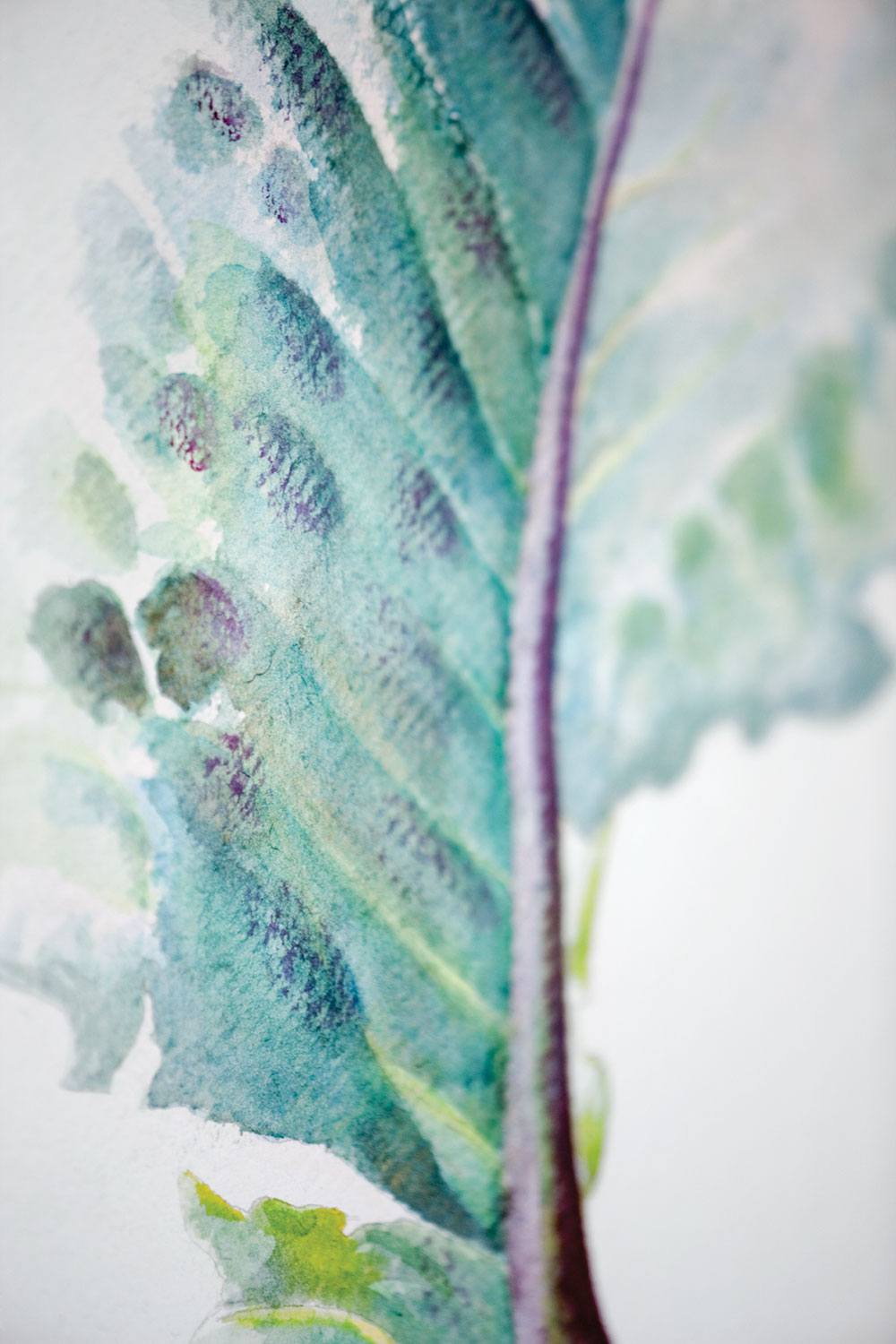 “The large windows allow the sunlight to filter diffusely, while exposure to the northeast is ideal for painting,” says Saalburg. “In the workshop, everything has to be in tune—the harmony of colors, the beauty of light, the bareness of working materials. Everything contributes to create what I call the spirit of the place.” Students appreciate the contemplative nature of the classes and the chance to engage in the infinite nuances of nature. There’s no stress or urgency in the studio and no laptops around that might break the spell of the meticulous painting.

The atmosphere is enhanced by the proximity of an extensive vegetable garden laid out in typical French style. Structured with hornbeams and fruit trees, it has a cutting garden on one side and fruits and vegetables on the other.

Such abundant flora provides a constant source of inspiration for Saalburg and her students. “Watching nature, understanding the plant, highlighting its beauty and its particularity, those are the stakes of my teaching,” she says.

By Marzia Nicolini | Photography by Serge Anton/Living Inside