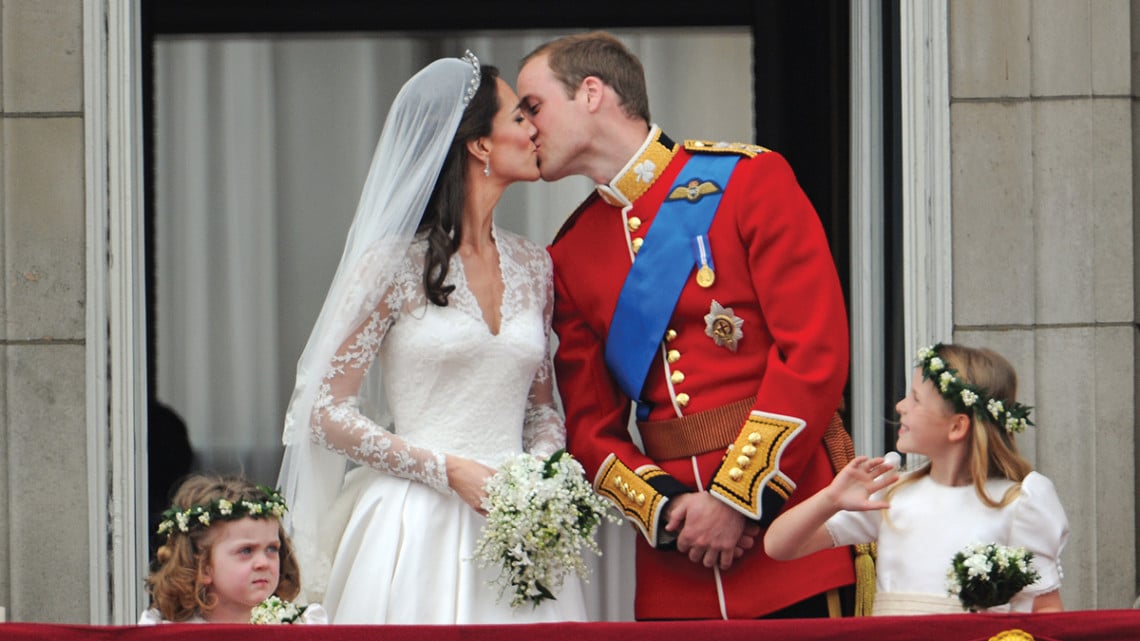 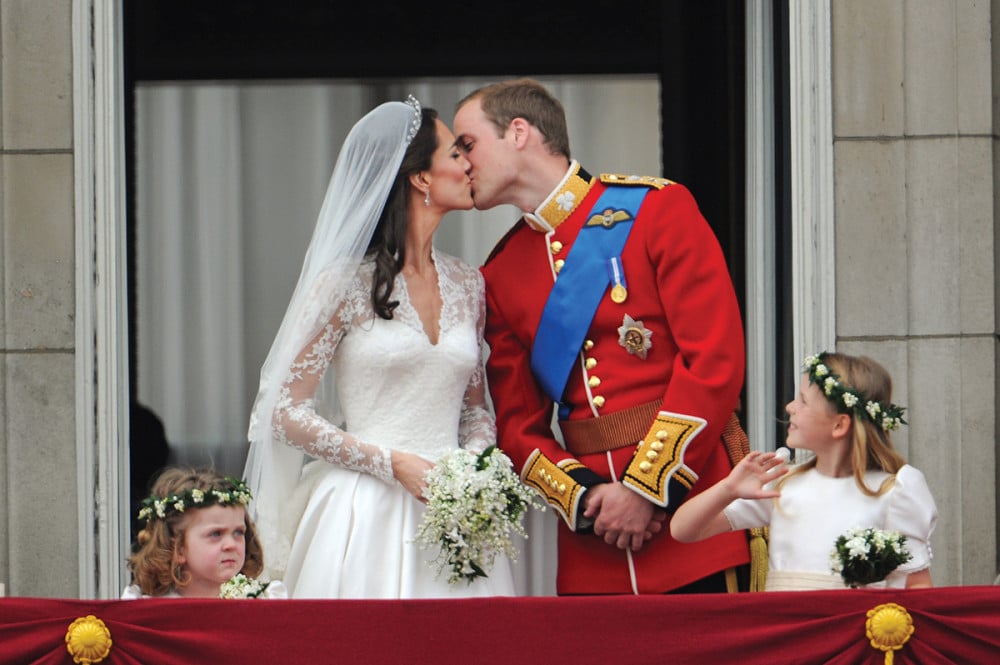 Flower girls with circlets and bouquets of hyacinths, myrtle, and ivy look on adoringly as Their Royal Highnesses, The Duke and Duchess of Cambridge kiss as newlyweds. Lilies-of-the-valley in the Duchess’s bouquet were chosen for their meaning, “You make my life complete.” (Kay Nietfeld/Corbis)

If Shane Connolly enjoyed a rarefied reputation as one of Britain’s most famous and talented floral designers before, after he was awarded the Royal Warrant by His Royal Highness, The Prince of Wales, his stratospheric position was duly sealed. As such, he creates the milieu for countless public royal events, as well as wonderful private festivities that are never discussed. “It’s tacitly tight,” he told us recently. “Confidentiality agreements mean private things remain private. It’s actually a very good thing.” 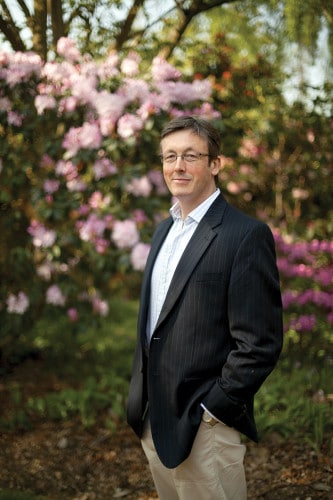 Without question, this Royal Warrant imparts a kind of floral imprimatur that validates Connolly’s outspoken fervor for sustainability and partiality for local and seasonal plant materials; it is lockstep similar to the Prince of Wales’s proclivity for native British plant material. However, the warrant does not restrict the talented 48-year-old from working for others. We met up with his team in the spacious courtyard of London’s venerable Royal Academy of Arts at 4:00 p.m. on a chilly March afternoon. Trucks of every size and description were jockeying for parking spots at the service entrance, waiting to unload lighting devices, tables and chairs, linens, and party supplies. In their midst, Connolly’s two vehicles were filled with a bounteous assortment of spring blossoms, branches and trees.

At precisely 6:30, the working teams were replaced by 300 sipping, nibbling, art afficinados. To be sure, Zoffany’s oversized genre paintings of famous theatrical characters and British and Austrian royalty garnered their share of admirers, but everyone in attendance applauded the talent of “the flower maestro.”

Connolly chuckles at the moniker, responding that he feels lucky to be doing something he loves so intensely, and is then quick to credit his mother, Margaret “Peggy” Connolly, for his earliest awareness of beauty: “She was beautiful. She loved color and arranging flowers, so consequently, flowers were always in our house—always.” Connolly says for double emphasis. He says that his mother not only dressed impeccably, she was ever aware of the natural beauty around her. “When we were out driving she would comment on the colors we encountered along the way, such as ‘Oh look at those lovely yellow primroses,’ or ‘I would love to have an evening dress like the color of that spectacular sunset.’ It was impossible not to be influenced by this brilliant attitude laced with a sense of wonder.”

Belfast-born Connolly has been working in floral design since 1987, after a brief foray into research psychology. Times were difficult in Northern Ireland, and Connolly never forgot his early years: “Although I was always interested in gardens and was given a small greenhouse when I was 12, boys did not do art at that time, so I thought psychology might be interesting.” A year later, an encounter with a flower arranger altered the course of his life forever. He worked for celebrated florist Pulbrook & Gould for two years before founding his own firm in 1989. Today, he runs Shane Connolly Flowers with his business partner, Jamie Marlar, in West London. 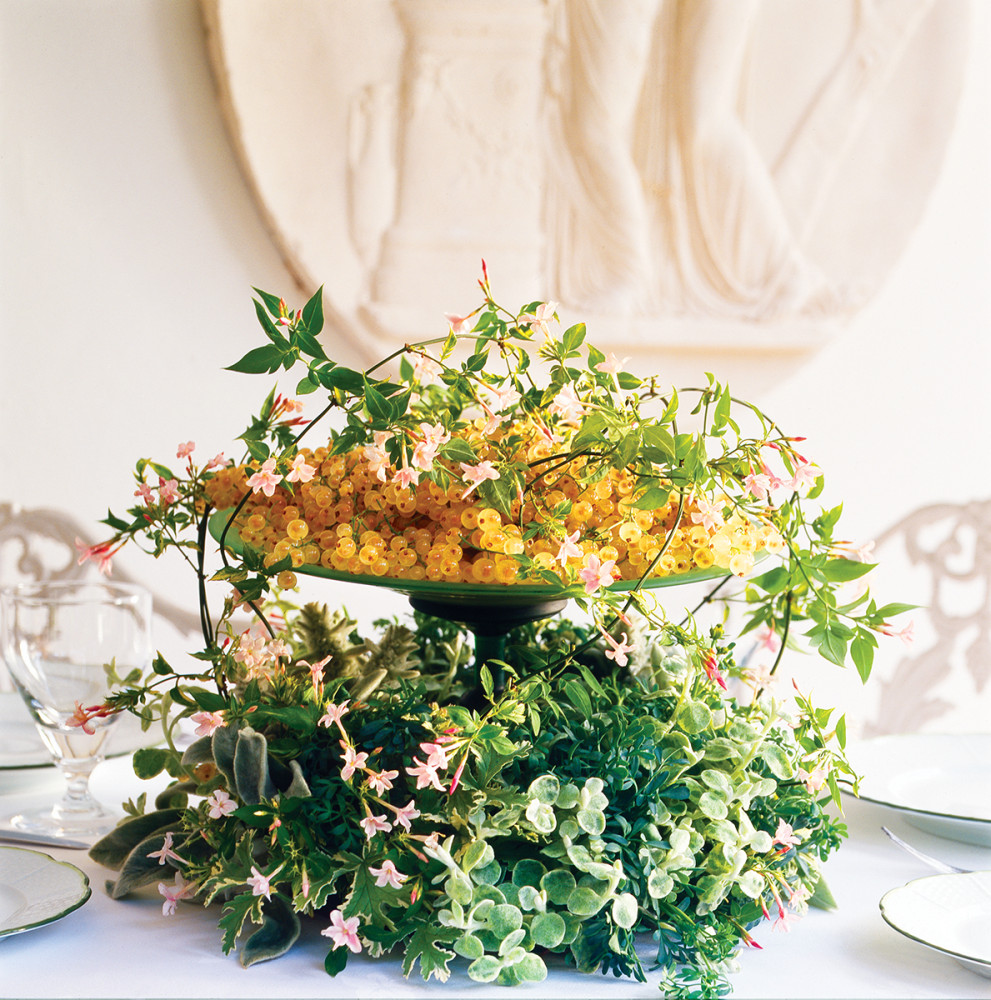 Not surprisingly, the bestowal of the Royal Warrant from His Royal Highness, The Prince of Wales in 2006 propelled Connolly into celebrity status. The special designation as the official supplier of flowers for royal events came soon after orchestrating Prince Charles’s 2005 wedding to Camilla Parker-Bowles. “The charming nuptials were highlighted by the use of crab apple and cherry trees, which were subsequently planted in the garden at Highgrove,” he says. “The Duchess of Cornwall carried white lilies-of-the-valley and auriculas in soft, pale blues and grays that were compatible with her dusty blue dress.” 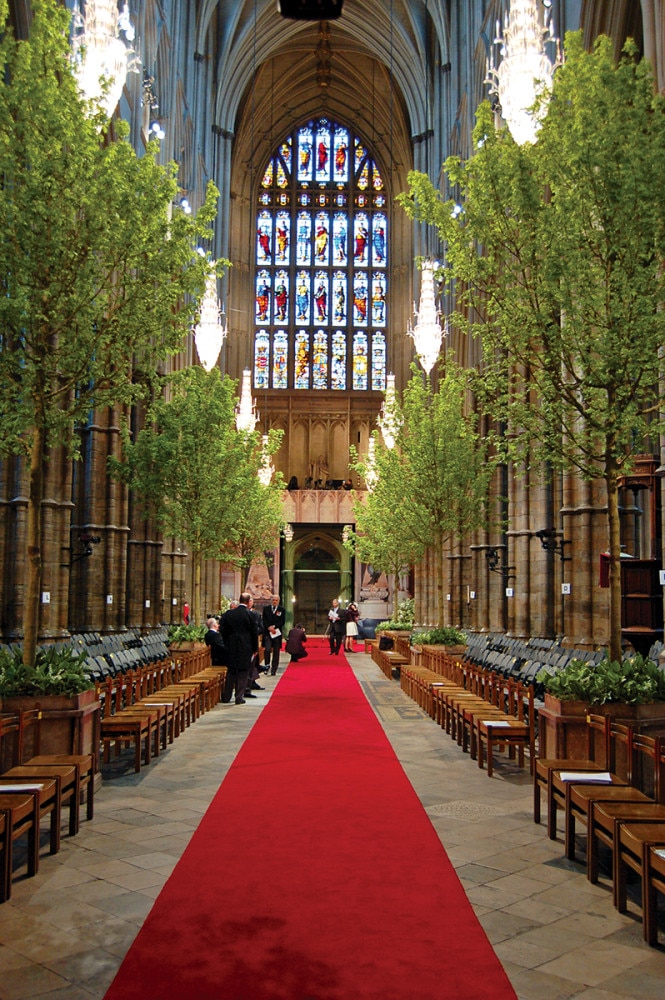 Majestic hornbeam and field maple trees flanked the long aisle of Westminster Abbey for the wedding of Their Royal Highnesses, The Duke and Duchess of Cambridge. True to Connolly’s commitment to sustainability, the trees were later replanted in the National Memorial Arboretum. (Photo Courtesy of Shane Connolly LLP)

Marlar adds: “The Prince of Wales’s and Duchess of Cornwall’s wedding was particularly pretty. The event was very much and understatement, surely more than Prince William’s recent marriage to Catherine Middleton, which we were also fortunate to do, but the approach of sustainability—using British flowers and replanting what we could for future continued enjoyment—was exactly the same.”

Recalling preparations for the spectacular April 29th, 2011, royal wedding, Connolly describes the fun he had working with the young and enthusiastic couple. He was particularly delighted that Catherine Middleton (now the Duchess of Cambridge) expressed her interest in the language of flowers. “During our first meeting, she said she loved the language of flowers, and so do I. I even wrote a book about the subject. So that was a lovely coincidence. Eventually, they chose natural materials cut from the royal estates at Windsor and Sandringham that felt typically English and had special meaning. Amidst the euphorbias, dark rhododendron leaves, and wisteria, azaleas symbolized femininity, and lilacs, first love.”

For her bouquet the Duchess chose lilies-of-the-valley, which mean, “You make my life complete.” Other flowers included hyacinths, representing the constancy of love; myrtle and ivy, symbols of love and marital happiness; and of course, the symbolism of sweet William is obvious. “The couple wanted things to reflect their personalities,” Connolly says. “It was not a statement of anything other than their individuality. It was completely straightforward—simple and good with no unhappy moments in the buildup to the wedding. Not one.” 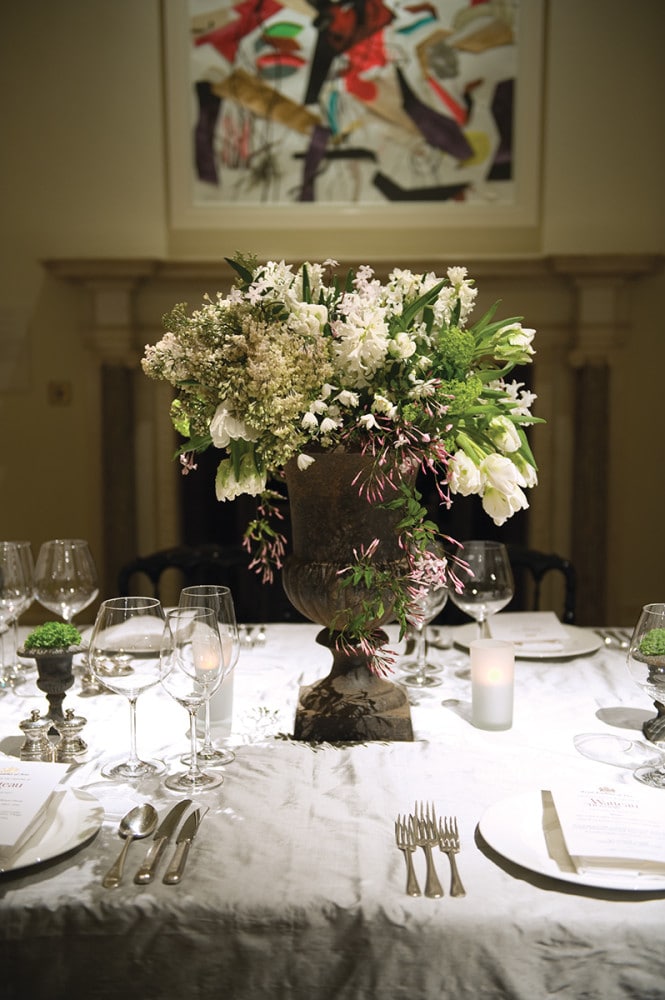 An arrangement of jasmine, parrot tulips, snowflakes, lilacs, and hyacinths spills over an urn at a private dinner party. (Photo Courtesy of Shane Connolly LLP)

Describing the splendor of Westminster Abbey lined with its allée of eight 20-foot-tall, majestic maple and hornbeam trees, underplanted with growing things such as lilies-of-the-valley, wild strawberries, and ferns, Connolly says, “When you looked at the Abbey structure, it was crying out for trees. It was obvious the space needed something dramatic, and the trees created great impact.” Then, true to his commitment to sustainability, the graceful sentinels were later replanted in the National Memorial Arboretum as joyful, living mementos of the day for subsequent generations to enjoy.

Although Connolly’s position keeps him buzzing with royal events, his reach extends far and wide in the world of private parties, weddings, corporate events, and receptions. “They are all special in their own ways,” Connolly says, recalling one of his favorite weddings in which they used lots of rose bushes in wonderful ice cream colors that were subsequently replanted in the bride’s garden. “When we recently returned to do the flowers for her 40th birthday celebration, we put a marquee over those same now very mature bushes, and it was a stunning, very sentimental thing.”

Another long-ago but special wedding in Northern Ireland still sparks memories: “I carried stephanotis plants home to use in my cousin’s wedding,” he says. “The bride was also my mother’s goddaughter, so we were all involved. After the wedding, the stephanotis was planted in our garden, and Mum gave the bride a bouquet of it every subsequent birthday. When Mum died last year, I presented the plant to my cousin as a sweet, living memento.” 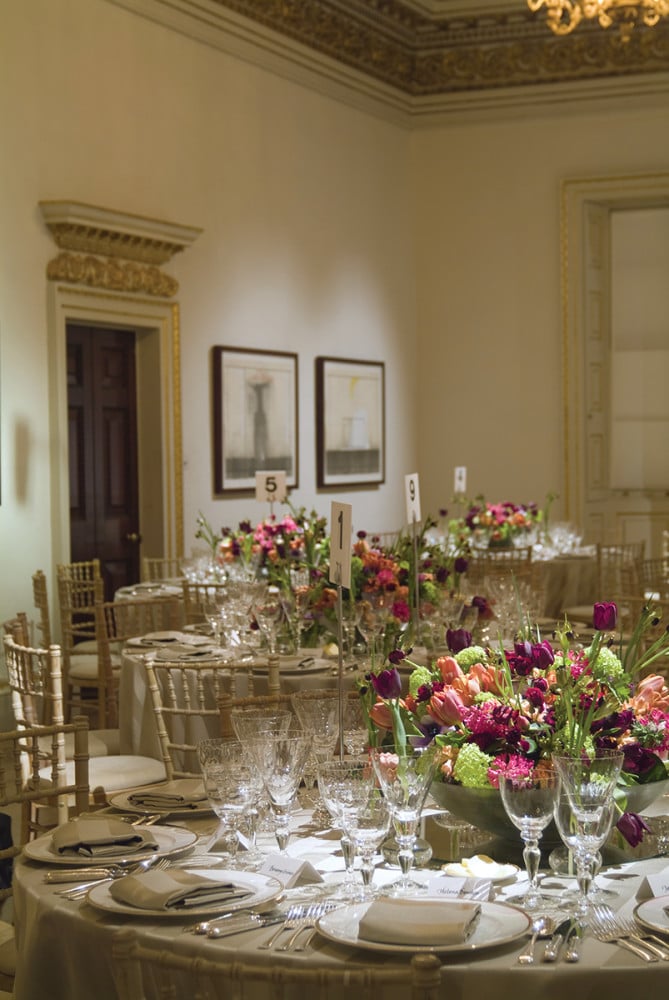 For an event at one of London’s leading museums, Connolly created low centerpieces of electric-hued spring blooms in low bowls. (Photo Courtesy of Shane Connolly LLP)

Marlar says, “We feel the whole aspect of sustainable and seasonal is immensely important. Recycling is not a choice. We even cut down on the use of Oasis. We are not flying in roses from Holland or lilies from Ecuador, and because Shane adores observing subtle changes in the seasons, he is regularly seen perusing local flower markets, talking to all the local purveyors.”

Now looking back on our London evening with Connolly’s team at the Royal Academy of Arts, it would appear that two great artists were represented that night. Featuring some of the designer’s personal favorites—sprightly cherry blossoms and green Guelder roses—Connolly’s masterpieces underscored his wordless crescendo and utterly cool dash of glamour. 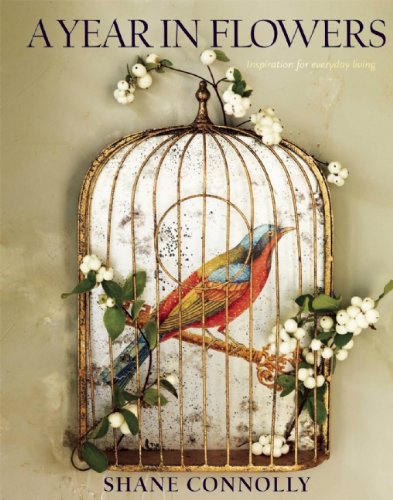 Shane Connolly is a sought-after speaker and gives teaching demonstrations all over the world. For more information, visit www.shaneconnolly.co.uk/

Connolly’s book, A Year in Flowers (Clearview Books, 2012) is available on our Flower Magazine shop. Celebrating the seasons, it is friendly and accessible inspiration for everyday flower arranging year-round. 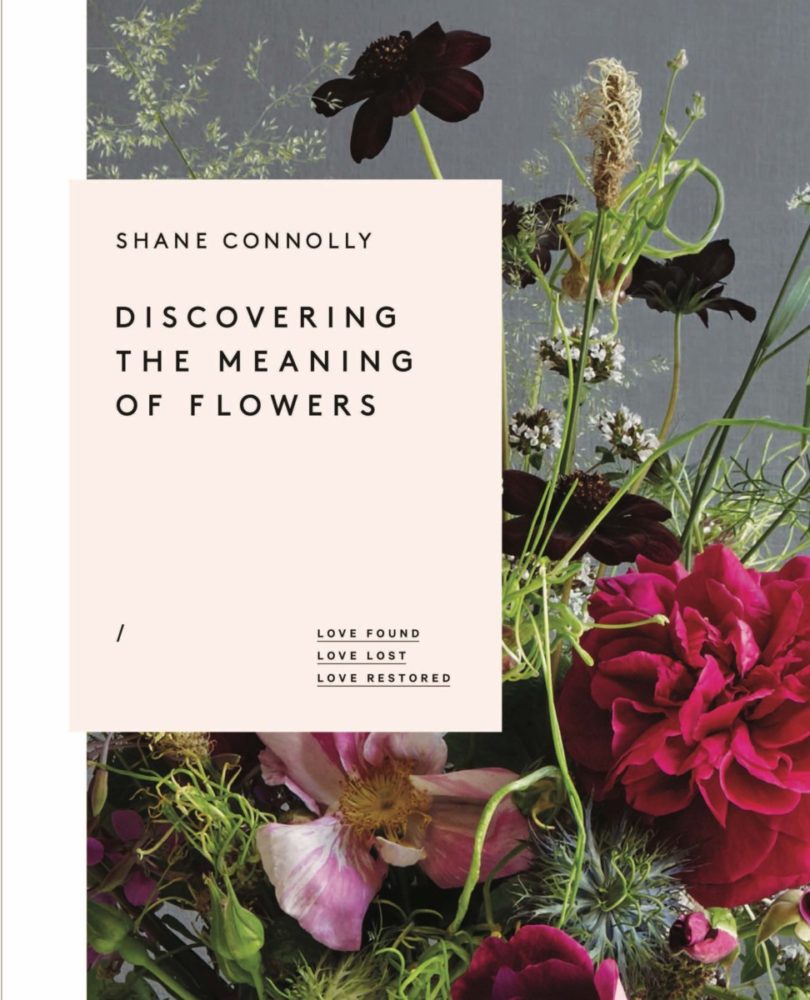 Next post Listen to the Land: Creating a Southern Woodland Garden