In the photography-filled pages of Renewing Tradition, architect Eric J. Smith reveals a design philosophy rooted in reverence, humility, and the tenets of classicism

Architect Eric J. Smith loves the stories of houses. At a recent speaking appearance, he was describing the renovation of an old lake cottage he purchased in Michigan. The home is near a golf course and, over the decades, golfers had trudged up and down the stairwell in their golf shoes, leaving spike marks all over the stairs.

“In the end, I decided to keep the spike marks,” said Smith. “To me, they are part of the house.”

It would be natural for Smith, an esteemed architect, to want to put his own stamp on his home. Instead he approached the renovation with reverence and humility, not so much as an owner but as a steward.

In his new book, Renewing Tradition (Rizzoli New York, 2019), Smith offers an extended meditation on the same themes. Whether it be a Georgian mansion, a Dutch Colonial, or a French Country home, he cleaves to the tenets of classicism, which always renders a home that feels right and true in its place.

Gorgeous photography, combined with Smith’s notes and—delightfully—his drawings, tells the story of each residence and showcases many of the jewels of the archi­tect’s 30-year career.

The owner of the Georgian home in Atherton had decorated many previous houses, but knew that this one would be a legacy home where her family would live for generations. In the dining room, she worked with Gracie, a New York-based custom wallpaper company, on a Chinoiserie print with native Northern Californian birds replacing the traditional Chinese birds. (She got the idea from looking at the birds on her children’s plastic placemats!)

A gray and white palette, including Calacatta marble, brings warmth to a master bath.

A porch with entrances off the living room, breakfast room, and master suite underscores the ease of indoor/outdoor living in Florida. 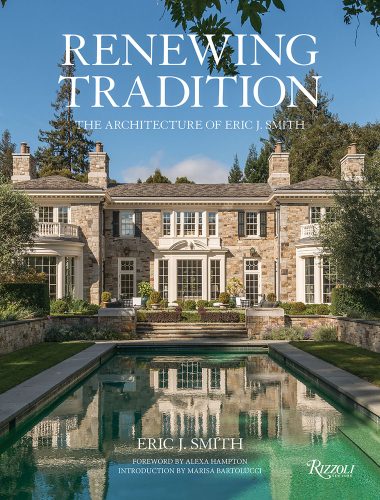