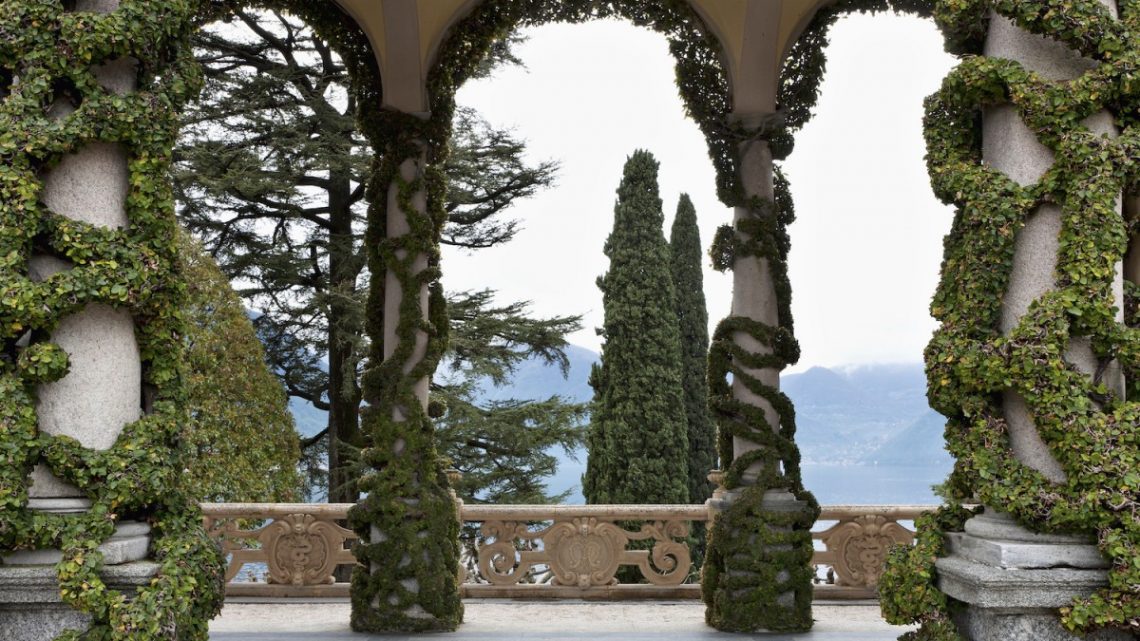 Pliny the Elder’s plain and simple description summarizes, in a few notes, the landscape encountered after traversing the grueling and rugged Alps. With their eyes still filled with deep precipices and dazzling glaciers, travelers find themselves enchanted when they set their sights on a “country” where the mild weather makes it “always green.” A strong and in some ways extraordinary contrast between the gentle climate of the lake, which seems to anticipate the sea, and the wintery, icy cold, and gloomy conditions of the pointed mountains surrounding it. 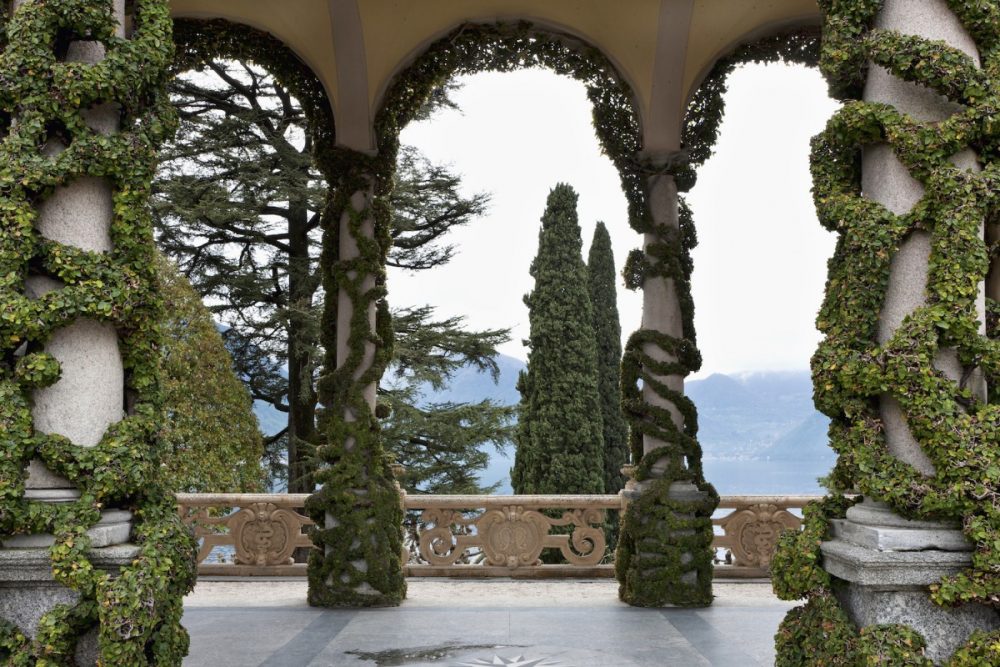 At Villa Balbianello, the columns on the Cardinal’s loggia, which overlooks the lake, are wrapped in Ficus pumila, a climbing plant common around Lake Como.

The tradition of holidaying on the lake shores dates back to Roman times, in particular to the Imperial Age, when the culture spread of suburban villas for rest and otium far from the hubbub of the city. The letters of Pliny the Younger, nephew of the above-mentioned Pliny the Elder, describing his two villas on the lake—one overlooking the gulf of Lenno and the other higher up in Bellagio—are famous. During the Middle Ages, the concept of holidaying so dear to the Romans was lost. The owners of the lands and estates periodically went to their properties to deal with matters linked to the harvest or to hunt in the vicinity. And for this, a “master’s house,” rather than a “farmhouse,” sufficed. While indeed refined, these were above all functional and comfort- able premises, with vegetable gardens, olive groves, vineyards, and orchards alongside. 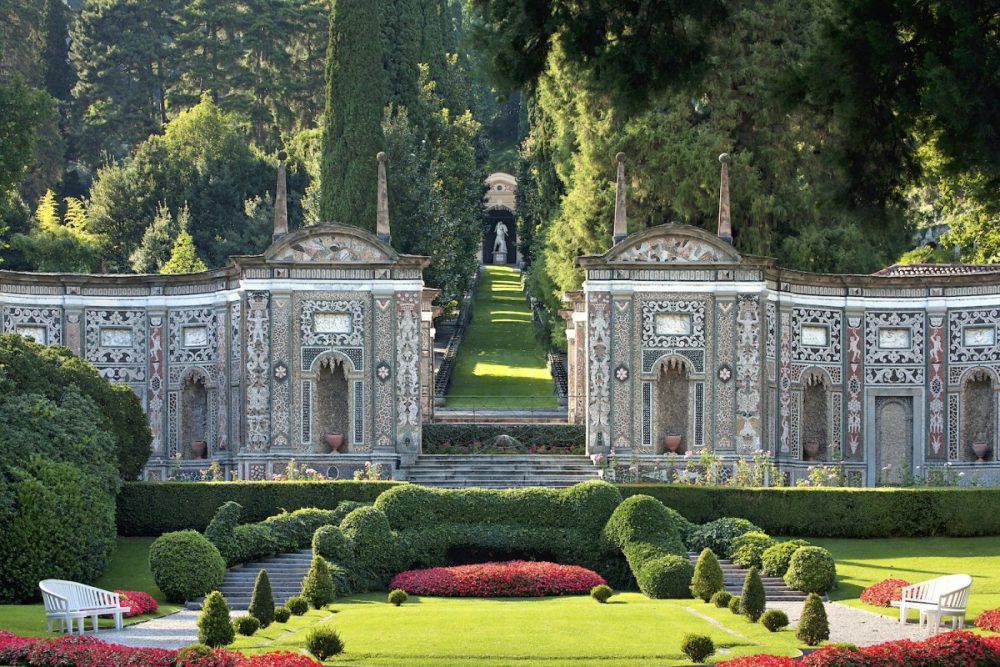 We would have to wait for the Renaissance, in the wake of the renewed discovery of antiquity, for the shores to begin to be populated by villas for rest and leisure, located in the most attractive places, sheltered from the wind, and surrounded by land suited to creating gardens. One of the first was that of humanist Paolo Giovio, built between 1537 and 1543. Also housing the scholar’s famous public art collection, it hence came to be known as Museo Gioviano. Giovio’s residence, a prototype of the renewed way of regarding the villa, was followed by others. In 1565 Cardinal Tolomeo Gallio started to build his villa, later to be called Villa d’Este, at Il Garrovo. Subsequently, the governor of Como, Giovanni Anguissola, had Villa Pliniana built in Torno. And again a few years later Gallio would buy Villa Balbiano from the Giovio family. Villas continued to be built in the seventeenth century, despite the wars, famines, and plagues: Villa Monastero and Villa Gallia both date from this period. 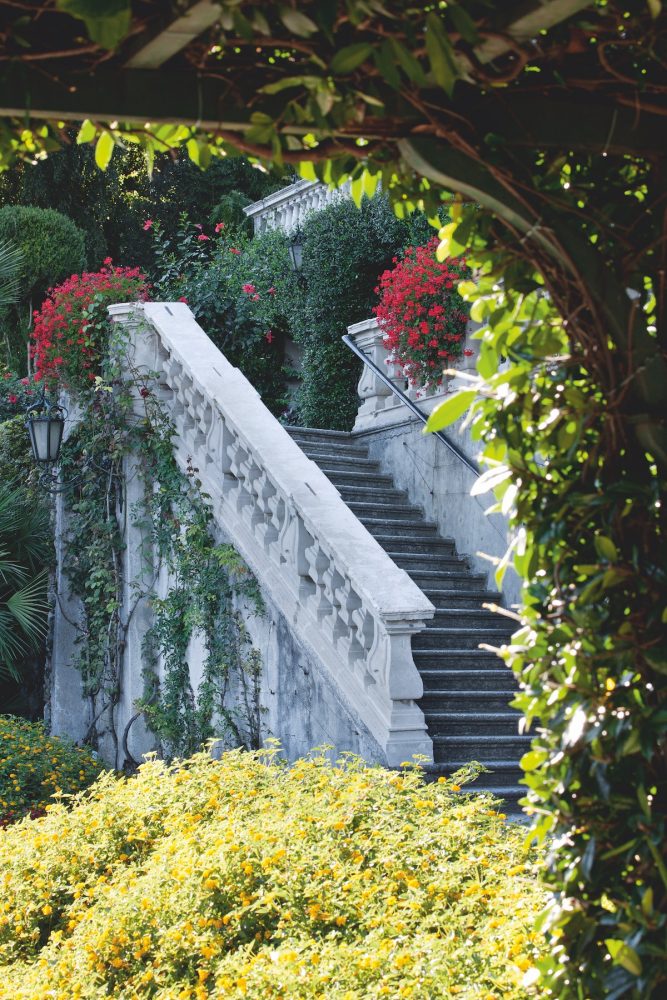 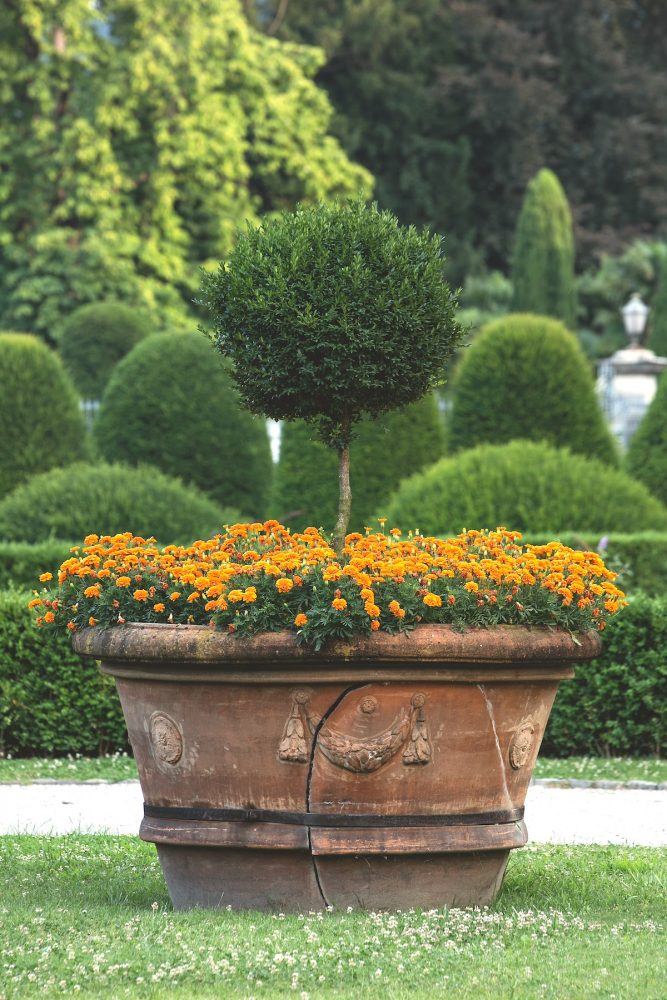 Documents and land surveys from the 1500s and 1600s tell of the birth of gardens which would gradually beautify and extend the vegetable gardens, orchards, and olive groves. In the mid 1500s, the existence is noted of numerous citrus groves, which were also cultivated in monasteries. In Gravedona, Varenna, and Bellagio, alongside the citruses the first decorative species began to appear, such as myrtle, rosemary, junipers, and cypresses, but also roses and jasmine. During the eighteenth century, Como’s gardens were embellished following the Italian and French formal models: the beds traced arabesque designs made with box hedges, colored gravel, and flowers. Villa Clerici, later Villa Carlotta, is an admirable example and its old layout is documented in the etchings of the Ville di delizia by Marc’Antonio Dal Re. Also dating from this period are Villa Sola Cabiati, then the summer residence of the Serbelloni dukes, and Villa Balbianello. 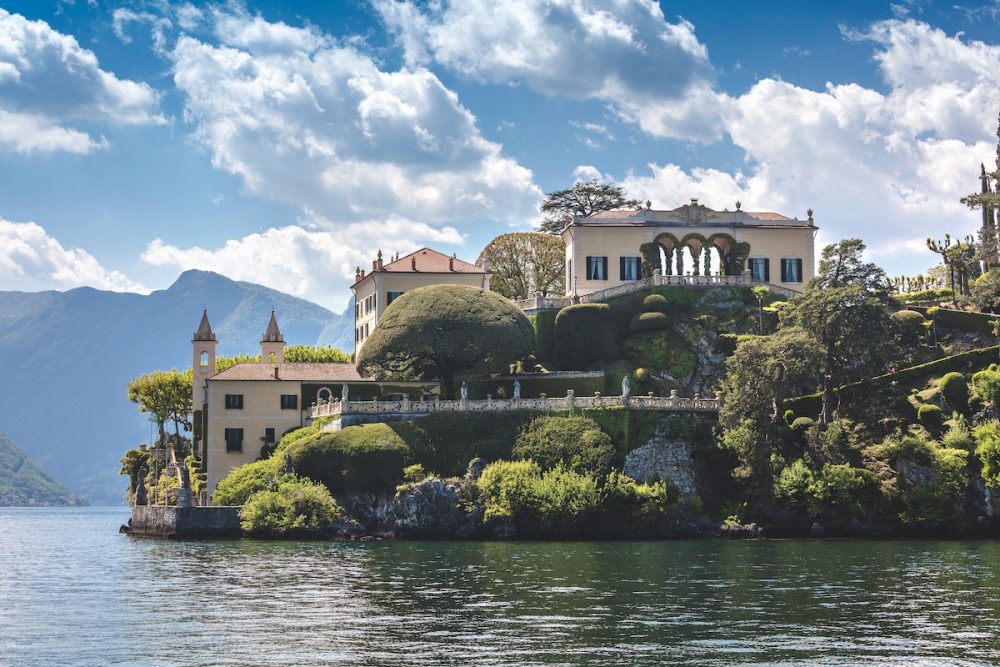 The atmospheric setting of Villa Balbianello has made it a favorite with filmmakers since the 1940s.

In the meantime, the trend for the Grand Tour, a prerogative in the education of young English aristocrats, spread around Europe, involving the nobility, upper classes, artists, and writers. Hence, the lake became a fashionable place, helped by the healthy climate, the varied and unexpected landscapes, and the splendid villas overlooking it. “It has become, so to speak, the place for all of the cultured world (…) and now not only Lombard nobles,but also Russian dukes, princes and German princesses, ballerinas and Parisian bankers possess a winter palace in Berlin or St. Petersburg, in Milan or in Venice, and also a villa on Lake Como.”

The words are those of German geographer and traveler, Johann Georg Kohl, who describes the colorful atmosphere that you could experience on the lake in this period: writers, musicians, and painters found inspiration for their works on the lake. Lake Como’s fame also spread thanks to authors such as Manzoni, Goethe, and Stendhal, who in his Charterhouse of Parma described the marvels of the central lake area and the Tremezzina. 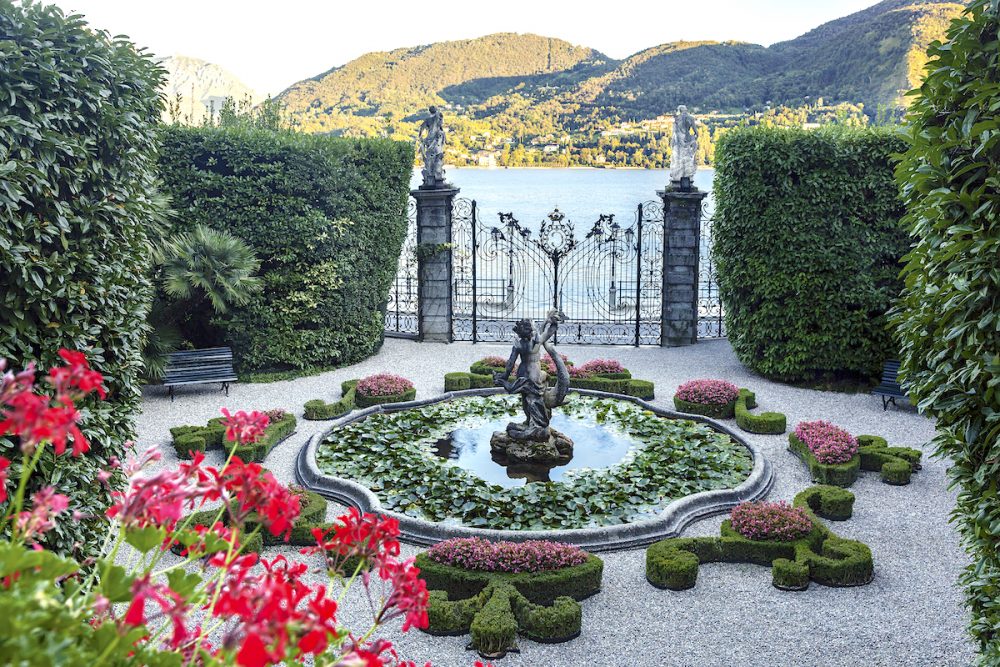 At the turn of the century, the straight avenues, regular lines, and complex designs of the beds, staircases, and nymphaea, everything that until then had characterized the formal gardens, were practically all wiped out by the arrival of the landscape garden, whose principles became popular in Lombardy above all thanks to the remarkably successful work of Count Ettore Silva, Dell’arte de’ giardini inglesi.

With the advent of Neoclassical architecture, the villas became even more luxurious. 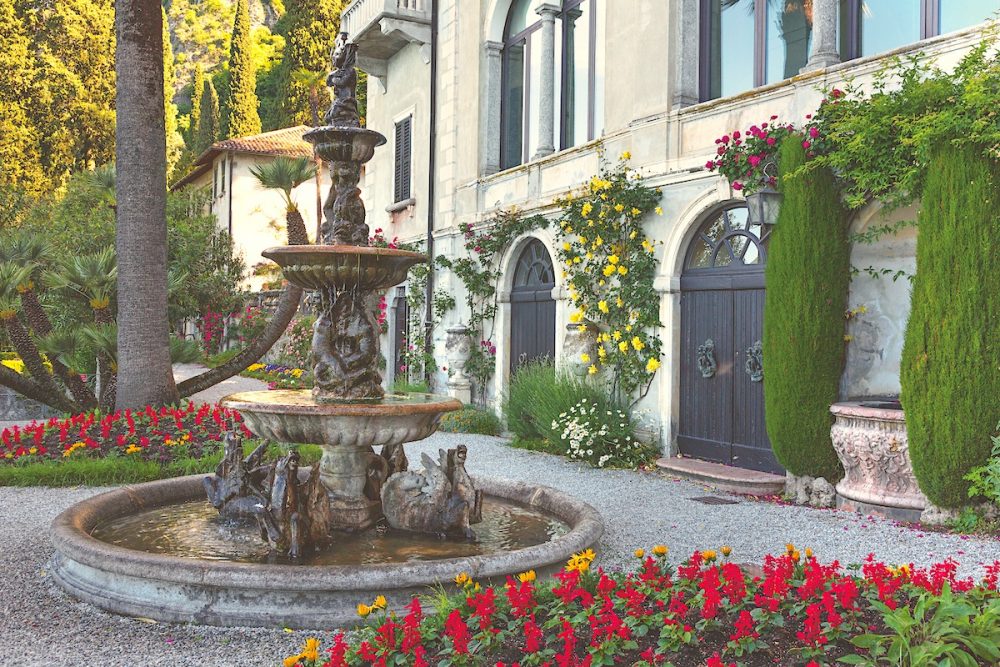 A fountain at Villa Monstero

Alongside the buildings that were modified according to the tastes of the time, other buildings were also erected from scratch. In this period, the art of gardens became consolidated and the green areas were no longer just an ornament, but interacted with the architecture and the environment, in a single, intricate dialogue. The passage to the Romantic climate of the nineteenth century took place in a less traumatic manner, and is seen in estates such as Villa Mylius Vigoni where the two “voices” live in harmony, narrating the sad events that marked the family’s history. In the first half of the nineteenth century, the lake area came onto the international tourism circuits thanks to the development of communications which made it easier to get to. In 1826, the new steam boats fostered connections via water, while in 1849, the railway shortened the distance between Como and Milan. The subsequent opening of the Gotthard tunnel gave the town a direct link to Europe. 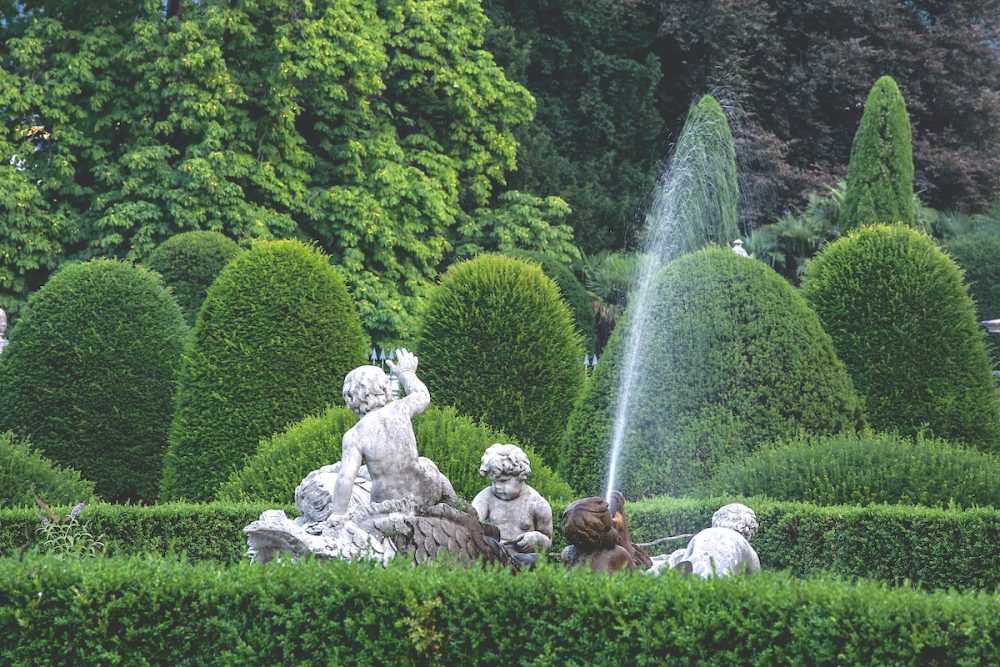 The fountain at Villa Olmo is the work of nineteenth-century Milanese sculptor Gerolamo Oldofredi.

Toward the end of the nineteenth century, the travel guides and manuals multiplied, and tourism, initially for restricted elites, transformed into a flourishing industry capable of dealing with an ever greater and more varied number of travelers, for whom it was necessary to create suitable accommodation. Despite the intensification of tourism, the villas and their gardens are still the main protagonists on the lake: silent witnesses of centuries of erudite discussions, unexpected love affairs, glamorous parties, and secret revolts against the order of things which took place in sparkling ballrooms and in the shade of centennial trees.

And so with all their history, splendor, and beauty, their charm persists into the present day. 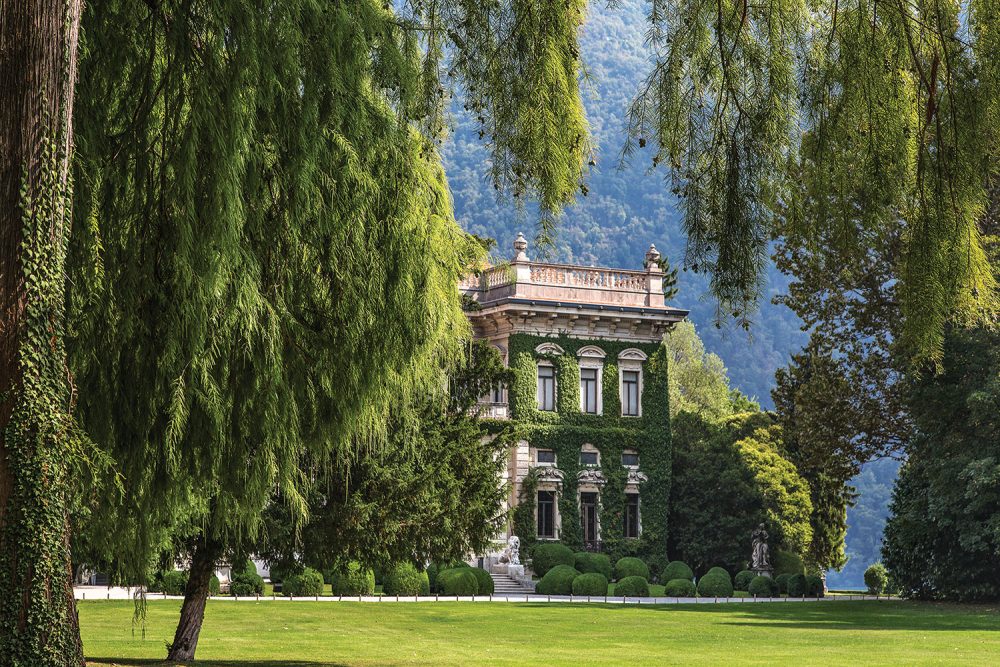 View of Villa Erba from the grounds 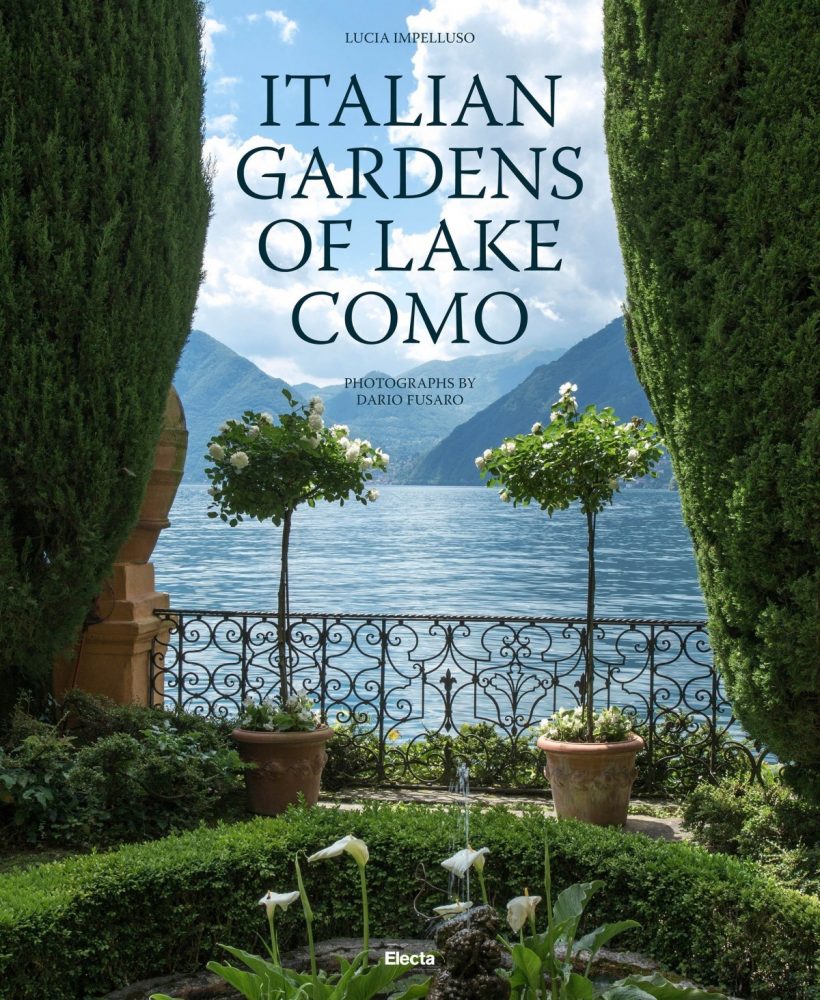