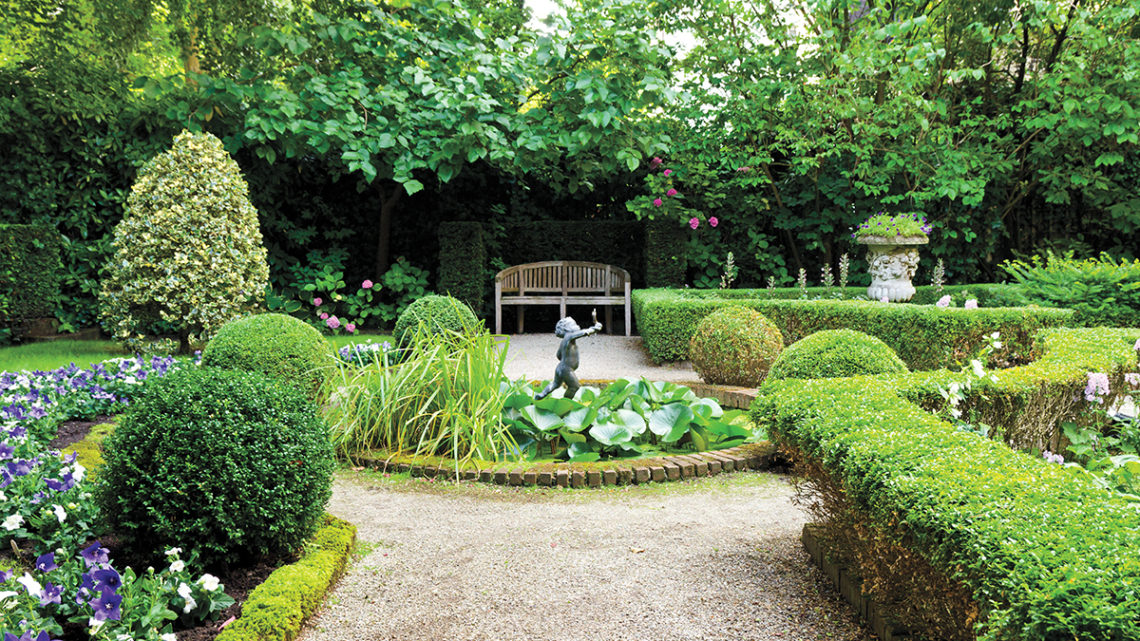 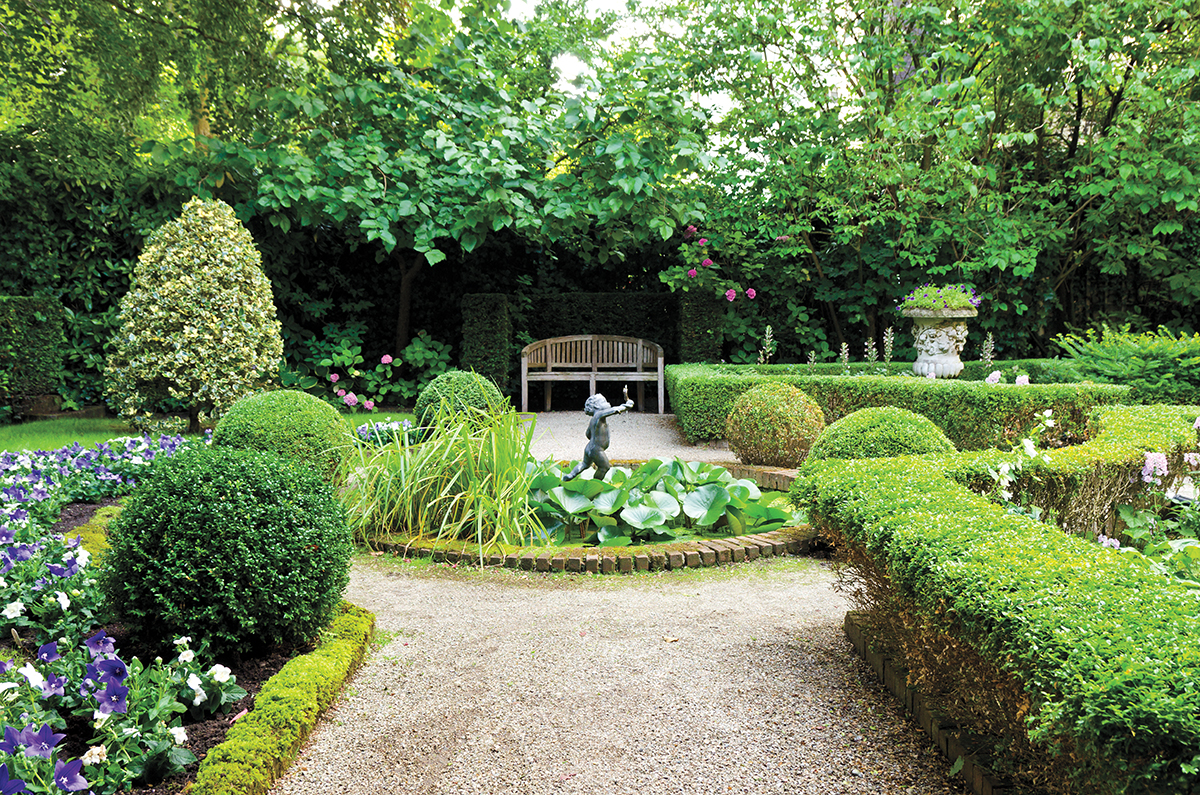 The main room of four parterres at Herengracht 460 features a circular lily pond with a bronze figure of baby Hercules. Photography by Tom Elst

In the Netherlands, flowers are an integral—even essential—part of daily life. Blanketed with seemingly endless fields of tulips and dotted with iconic windmills, the area is considered by many as the cut-flower capital of the world. Even during short, bleak winter days, when winds howl off the North Sea, locals plan spring gardens. This is especially true in the old residential part of Amsterdam, which rises like a stage set along the ring of canals more than 400 years old.

Here, hundreds of flower-bedecked bridges crisscross canals and quays lined with soaring, gabled houses standing shoulder-to-shoulder like battalions of soldiers in parade mode. The narrow buildings testify to the 17th-century  application of hefty taxes on a house’s width versus its height during Amsterdam’s prosperous Golden Age. 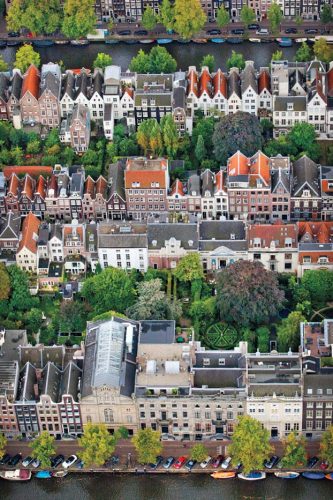 In this bird’s-eye view, one sees the full effect of Amsterdam’s rigorous city planning with distinct architecture and well-tended gardens that spill out behind the houses. Some classic examples take cues from French designs with decorative sculpture, water features, and seating areas. Photo by Cris Toala Olivares

Consequently, their long, outdoor spaces that stretch from canal to canal conform to the width of each house, but, like secret gardens, are tucked away from sight. No matter the size, these enclosed plots, which often terminate with a garden house in the back, are so beloved that nothing is spared in their cultivation. The earliest were useful gardens that grew vegetables and herbs; then they became ornamental pleasure gardens copied from French and English designs. Today, each reigns as a monumental triumph on a minimal piece of land that shows how horticultural magic is possible in a small space.

Those longing for a peek should schedule a visit during the third weekend in June, when each year Museum van Loon orchestrates Open Garden Days, and more than 25 canal gardens welcome visitors to tour Dutch oases usually hidden from view.

One of the most outstanding interpretations of formal French garden style unfolds behind an imposing 1680s residence on the Herengracht (also called the Gentlemen’s Canal), considered to be the most prestigious canal in the city. Owned by television producers Jan L.M. Meulendijks and Bart Schuil, the famous house was built by Hendrick Staets, a merchant involved in the slave trade. “When we acquired the property 20 years ago, the backyard was only grass,” says Schuil, “so we hired landscape designer Robert Broekema to re-create an 18th-century French garden that was here when Staets lived in the house.” 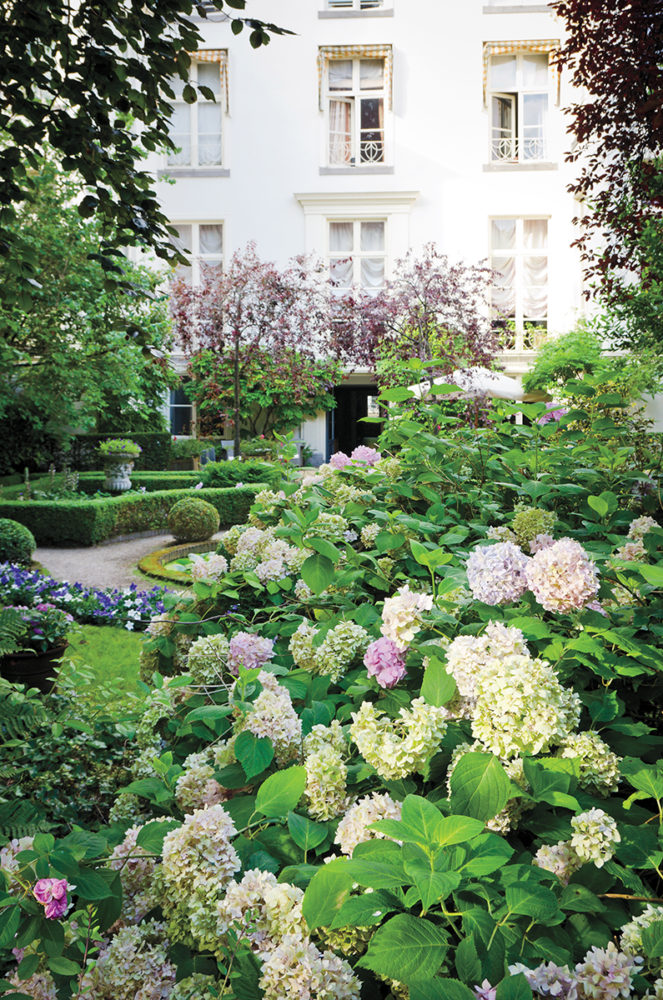 Often described as one of the most important canal house gardens in the city, this pristine oasis is a study in horticultural balance and symmetry. 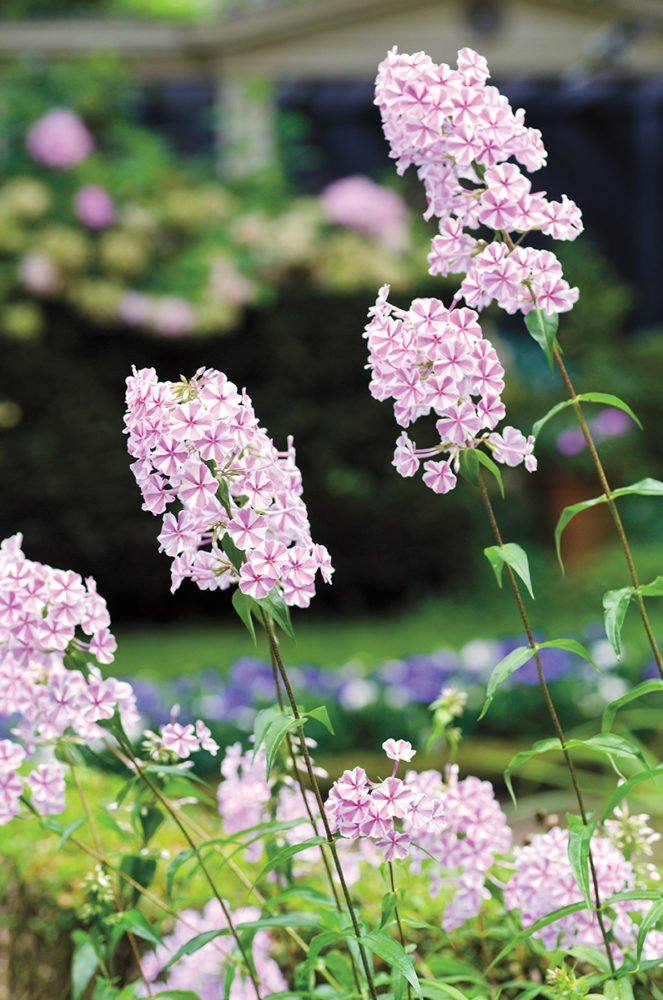 The grounds brim with tulips, daffodils, and violas in the spring before being replanted with summer blooms.

Benefiting from the extra space of a double lot that measures 49 feet by 98 feet, Broekema credits the symmetry of the rear façade as his inspiration. “An axis runs from the house into the garden, and culminates in the garden house,” he says. 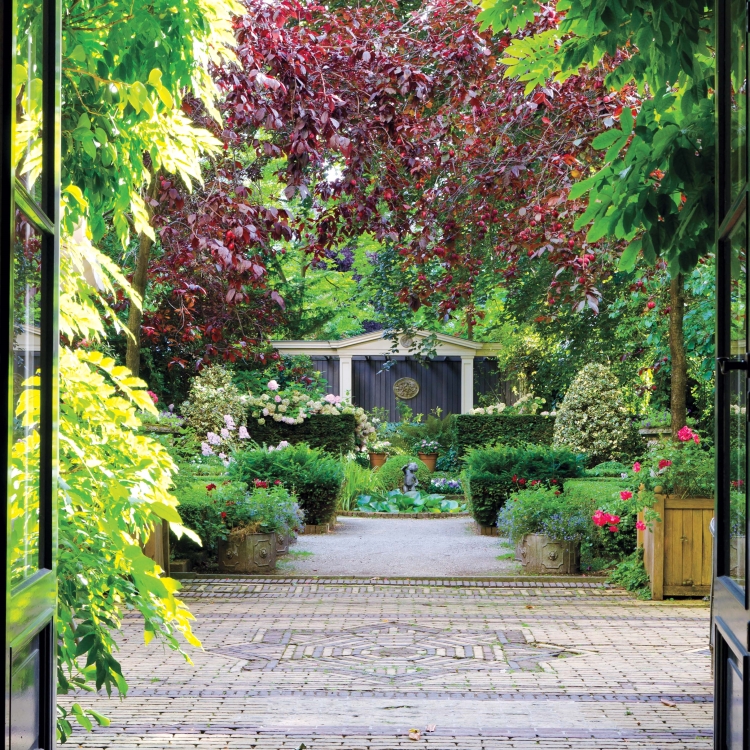 Large trees such as this copper beech are protected and cannot be removed.

With strong lines of taxus and boxwood hedges, the pristine, three-room garden resembles a mini Versailles, and begins near the house with the original, restored, star-encrusted pavement of red and yellow IJssel stones, deeply scented roses, and pots brimming with geraniums and lobelias.

Next, the main room of four parterres features a circular lily pond with a bronze figure of baby Hercules. Round buxus balls accentuate the pond’s shape; shell paths reinforce the width and lead to wooden benches, while taxus hedges enclose roses, impatiens, and hollies. The last room ends at the garden house, which is used for storage, while a huge, 125-year-old copper beech tree provides a canopy over shade-loving plants such as hostas and hydrangeas.

This garden reflects the light touch and contemporary sensibilities of its owners, Hans Kos and Rutger Brandt. Evolving from the rear of their early 17th-century house, “it mocks totally formal gardens,” says Brandt, director and owner of Galerie Mokum, a local realist art gallery, and Galerie Brandt, which specializes in contemporary art. 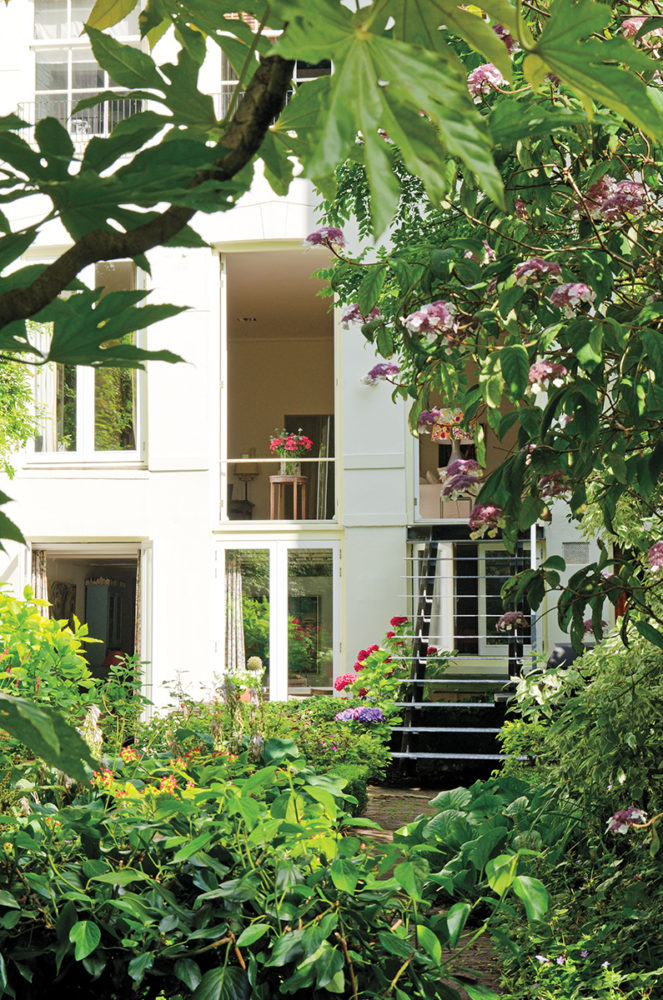 Whether admiring views from the second-floor living room, strolling curved paths, or entertaining in the sleek garden house, it is the owners’ private and amusing Valhalla. 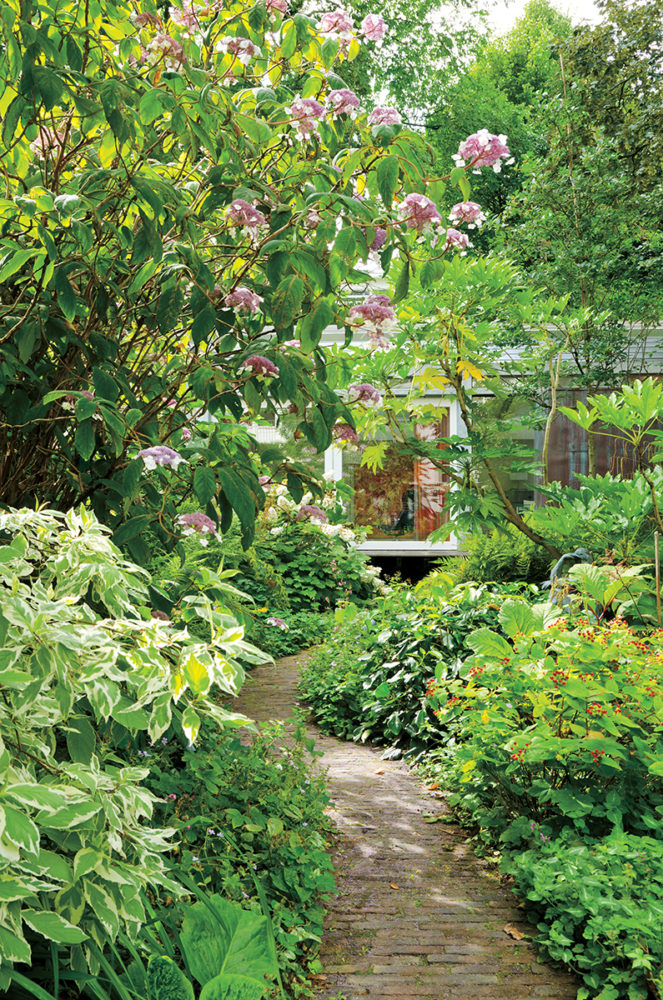 The owners of this garden adore its insouciant flair and woodsy feel, and like to underscore its contemporary vernacular.

Reached by industrial steel stairs that clang with every footstep, the garden abounds with tongue-in-cheek art and sculpture that peeks out from rocks and leafy corners. 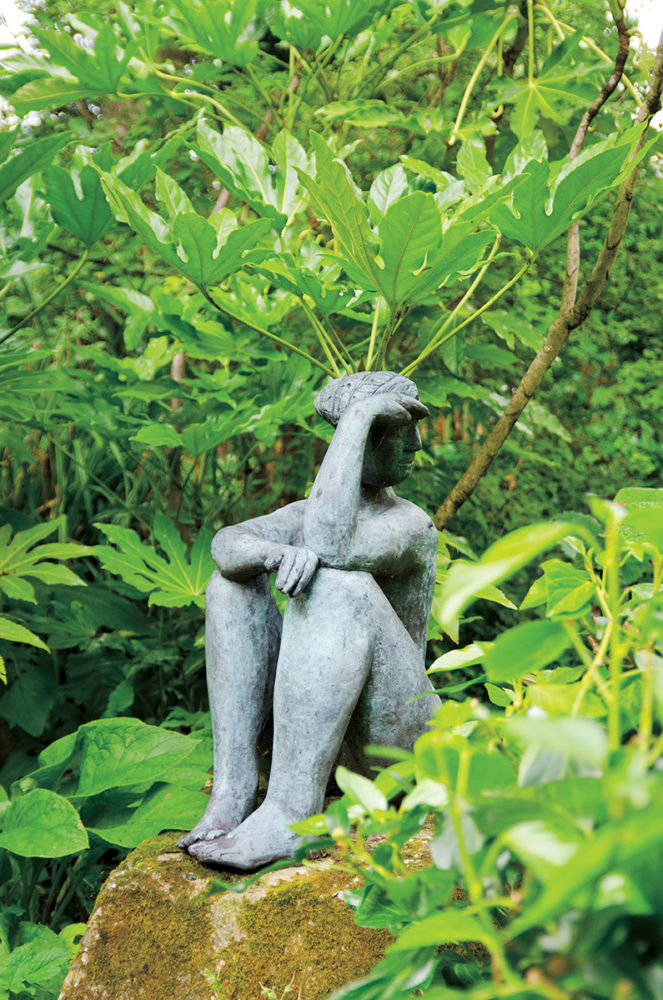 A sculpture by Saskia Pfaeltzer sits beside a large Fatsia japonica.

Explaining the three sections, Brandt says, “The first is recreational with a dining table close to the house; the second is loosely structured; and the third is the English landscape with wild ferns and water.” Kos likes to point out the large plant, Fatsia japonica, that dominates the sculpture by Saskia Pfaeltzer of a seated woman.

Farther along the curvy paths, the sight of giant goldfish and salamanders and the sound of croaking frogs accompany every stroll through the landscape rife with climbing white hydrangeas, big-leafed acanthus, and varieties of ferns. Interspersed among this almost woodsy setting, aromatic roses, lavender, and azaleas add bursts of color, while rhododendrons and oversized hostas conjure up thoughts of an enchanted forest.

“The one-story garden house was constructed in 1996 on the foundation of an old warehouse,” says Brandt. “After World War II we needed to rebuild the country, and Holland seriously went to work. So here a little railroad carried heavy bales of cloth from the warehouse.” 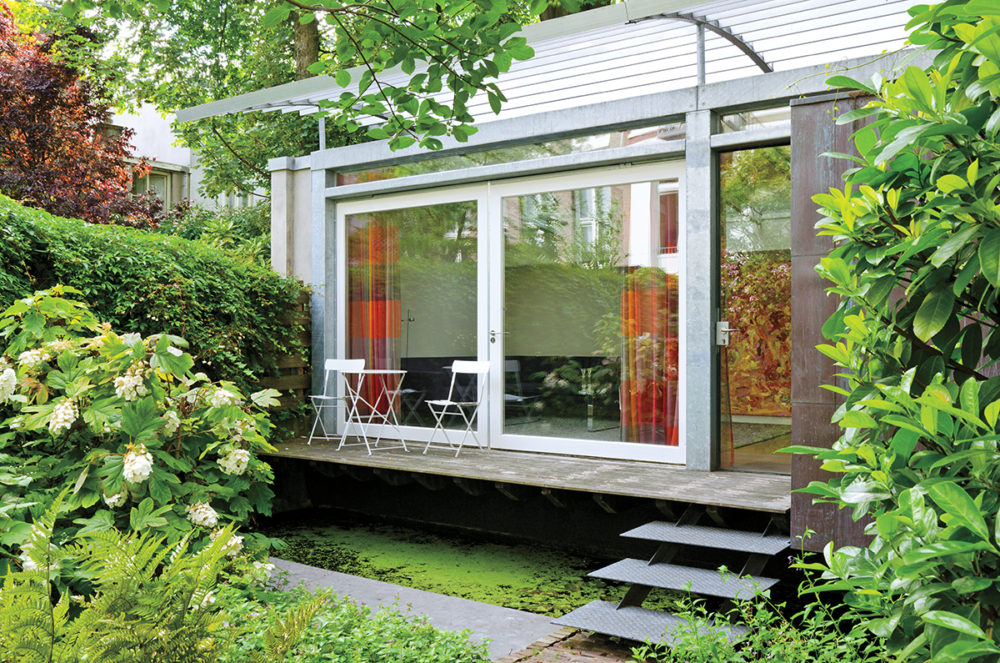 The one-story garden house was constructed in 1996 on the foundation of an old warehouse.

Today the sleek, rectangular, steel-and-glass building with a copper door effectively finishes the garden, and doubles as a light-infused guesthouse and favorite spot for entertaining.

In contrast to the majority of canal house gardens, a dramatic 21-year-old garden on the Keizersgracht (also known as the Emperor’s Canal) is a communal space that reflects the dedication and hard work of multiple families who live in separate apartments in the building. 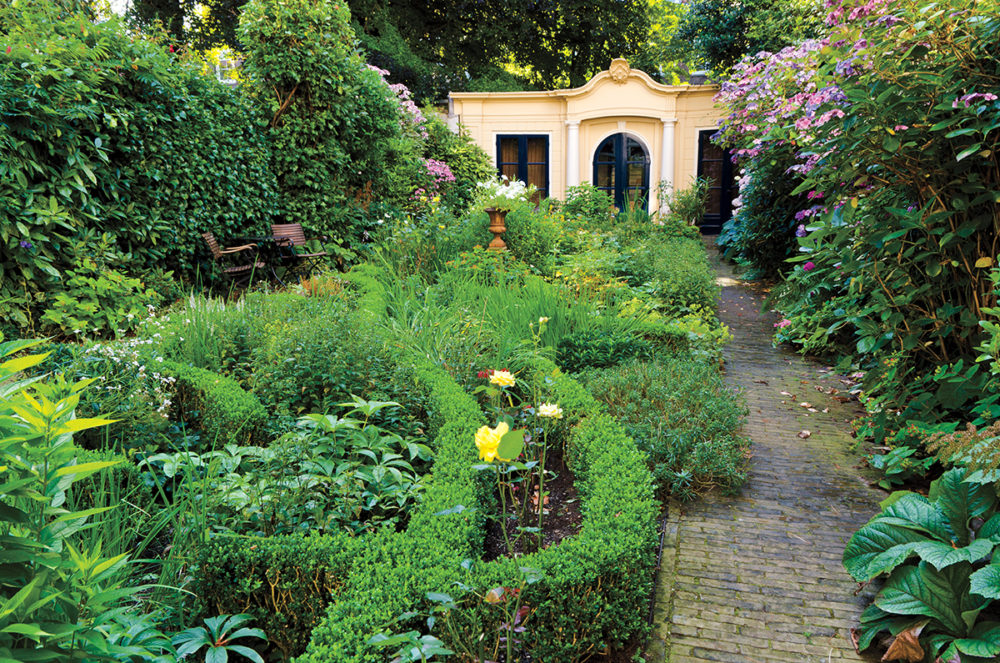 Maarten and Rietje van der Grinten, residents who oversee the garden’s planning and maintenance, feel lucky to be entrusted with its care. “Like many of the bigger canal houses, this was one split up into five flats,” says Rietje, “so there are ten hands working in our garden. It is so much fun to share the tasks and then enjoy the beautiful results.”

Explaining that the original garden was planted more than 400 years ago, Maarten says there wasn’t much left when they arrived 25 years ago. “There was a little bit of grass; we had rabbits and chickens, a swing set, and sandbox,” he says. “Our children played ball here with the schoolchildren from next door who came through a tunnel under the wall.” 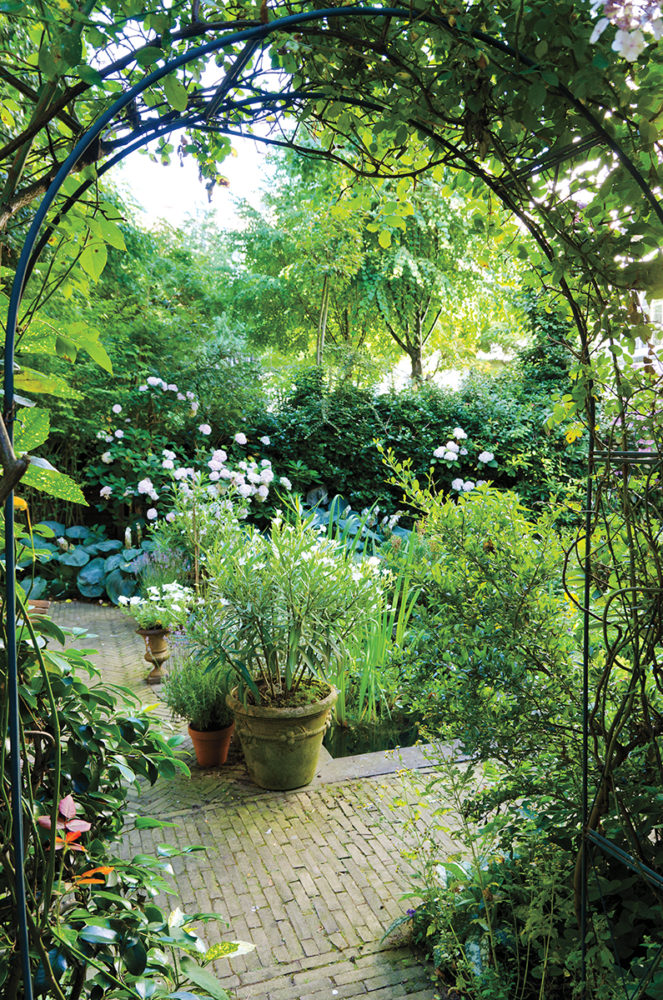 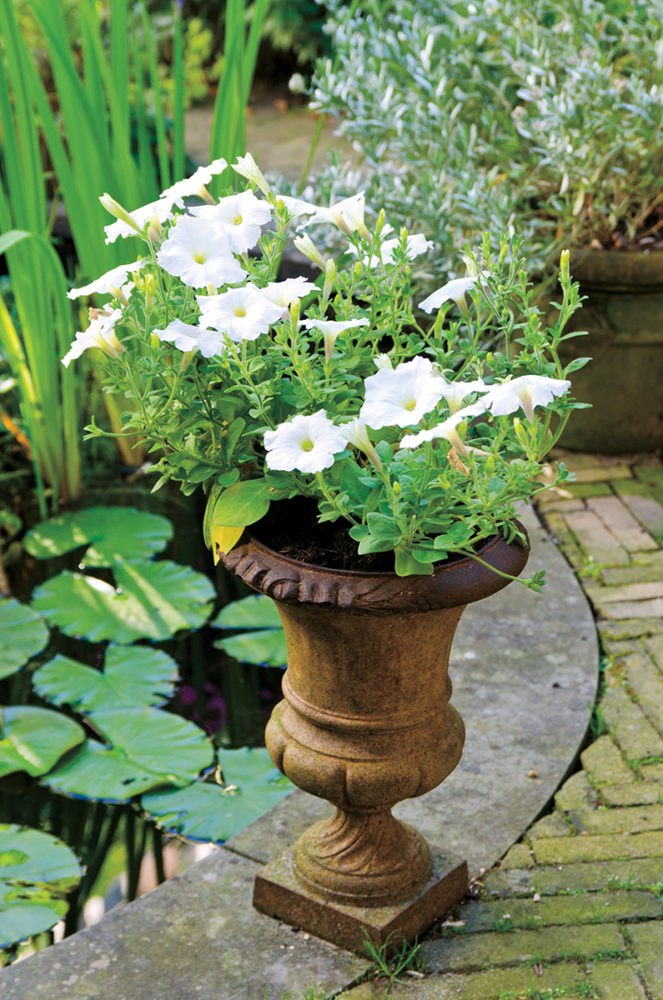 Gradually the van der Grintens exchanged their “play yard” for a flower garden with the overarching goal of easy maintenance, and they hired renowned Dutch landscape architect Michael van Gessel. “We wanted annuals and perennials and hoped it could be green in the winter,” says Rietje. “Although we didn’t imagine a formal garden, van Gessel was influenced by Arabic patterns and figures, and that is how the dramatic swirling taxus designs evolved. He suggested an airy white and yellow scheme, because yellow signifies life.”

A first glance perhaps dispels the notion of easy maintenance as the central bed’s lyrical Arabic shapes coexist with seasonal blooms such as tulips, narcissus, coreopsis, white phlox, and autumn anemones. Just below the main building is an herb garden, and at the back, a fountain, lily pond, and an 18th-century folly complete the inviting vignette. 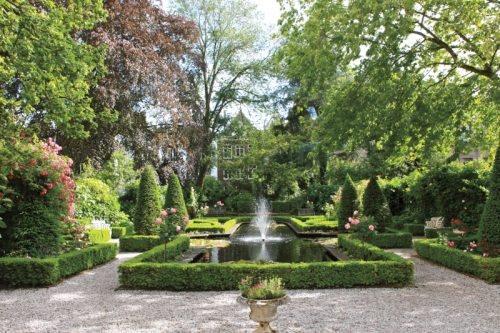 If you miss Open Garden Days the third weekend of June, but are planning a visit to Amsterdam another time, you can still experience the beauty of the city’s canal gardens. Find a list of canal museum gardens that are open to the public all year long.

The Majesty of Highgrove Gardens