Flower: Tell us about your upbringing in the Mississippi Delta and your many homes-away-from-home thereafter.

Julia Reed: I grew up in Greenville, Mississippi, a small but surprisingly cosmopolitan town smack in the middle of the Delta. When I was 16, I left to attend boarding school and college in Washington, D.C., then stuck around to work at Newsweek and U.S. News & World Report. Then I had a newspaper job in Winter Park, Florida, where I was a reporter for the Orlando Sentinel. Needless to say, the magazine world lured me back, so I took a job at Vogue in New York, where I stayed for 20 years.

During that time, I visited New Orleans frequently. It was during one of those trips that I heard myself announce—at about 3 o’clock in the morning—that I was making a temporary move there to cover a scandalous gubernatorial race. It was a good idea, and I did it, but I had absolutely no plans to do it until that moment. By the time the election was over in 1991, I’d been seduced by the city. I never really left New Orleans, although I retained my Upper East Side apartment. I finally sold it in 2005 and officially made New Orleans my home.

I hear you now have a second home back in the Delta and that it’s quite a place!

That’s right! Ever since I left the Delta, I fantasized about having my own place there some day. When my parents moved out of my childhood home a few years ago, I begged them to keep the lot behind it so I could build on it. James Carter, a close friend and an amazingly talented architect, designed the house on a legal pad while we were eating dinner and downing martinis. Basically, it’s a light-filled pavilion with a wing on each side. I call it The Folly because it fits both definitions of the word. The first being “an unusual or fancy building built in a garden for decoration or amusement,” and the second being “a foolish act or idea.” Turns out, building it wasn’t so foolish after all. It’s among the best things I’ve ever done, and I go as often as I can.

You’re so passionate about your adopted hometown. Your new book, Julia Reed’s New Orleans, has even been described as a love letter to the city. Tell us about “your” New Orleans.

Growing up, my family made frequent treks there to eat and play, so in my young mind it became this exotic destination. We’d hit up the seafood dives, and we’d always go to Galatoire’s. In my teens, New Orleans became less of a magical place and more of a place where you could get up to no good. As soon as I was old enough to drive, I loaded up a car full of friends and headed down to the Superdome to see The Rolling Stones. And I told you how I landed there in my 20s. What keeps me loving this place is that no matter how long I live here, there will always be nooks and crannies to discover, dark bars to get up to no good in, and loads of oysters on the half shell to chase with a cold beer.

Your original recipes have been said to impress some of the city’s best chefs. What’s your secret?

You give me far too much credit. Nothing is ever really original. Most of my recipes are just my takes on Creole mainstays, sometimes with a bit of classic French thrown in. You’ll find that some of my recipes are inspired by offerings from the city’s great palaces of Creole cuisine like Galatoire’s and Antoine’s.

Speaking of recipes, we love floral “recipes” here at Flower magazine. Can you share one of your own?

I love to mash a colorful mix of roses, peonies, and ranunculus into wine rinsers. Mine are antique and made from heavy cut glass, but we’ve designed reproductions for Reed Smythe & Company, the home and garden line I recently launched with my good friend and fellow Delta native, Keith Meacham.

Congratulations on the new line! Given that you’re such an avid hostess, tell us about some of the entertaining pieces.

We’ve got really great glassware and barware—highball glasses, votives, bottle openers, and ice buckets, plus a bar table and those wine rinsers. One of my favorite things is this gorgeous silver catfish jigger. Everything you need to stock the bar—except the liquor, of course.

Since the words “bar” and “party” are practically synonymous in New Orleans, tell us about the first party you hosted in town.

I rented the third floor of this enormous house on Royal Street for a year or so. It was this incredibly romantic space with crumbling plaster walls and 15-foot ceilings, so you could see straight across the Mississippi River from the balcony. I had almost no furniture, which made it feel even bigger during crowded parties.

Once, I had a big shindig for my friend Hamish Bowles from Vogue. My upstairs neighbor was a bass player, so he got some buddies together to play jazz. Like I always do, I made a big pile of Crabmeat Maison. The highlight of the night was when the table caught fire. I had stupidly draped some tall candelabras with Spanish moss, and the table went up in flames. We put it out and no one flinched—it was just a moment of excitement. I always say every good party needs an element of danger.

That would have been a nightmare for most of us! Moving on to happier thoughts, tell us about your “dream” party.

I am lucky enough to have dream parties all the time. For me, that can mean a few friends around the table for a simple Sunday supper or a lavish holiday dinner or a full-on shindig with music and dancing. I think anytime you can break bread in pretty surroundings with people you love, it’s a dream party. 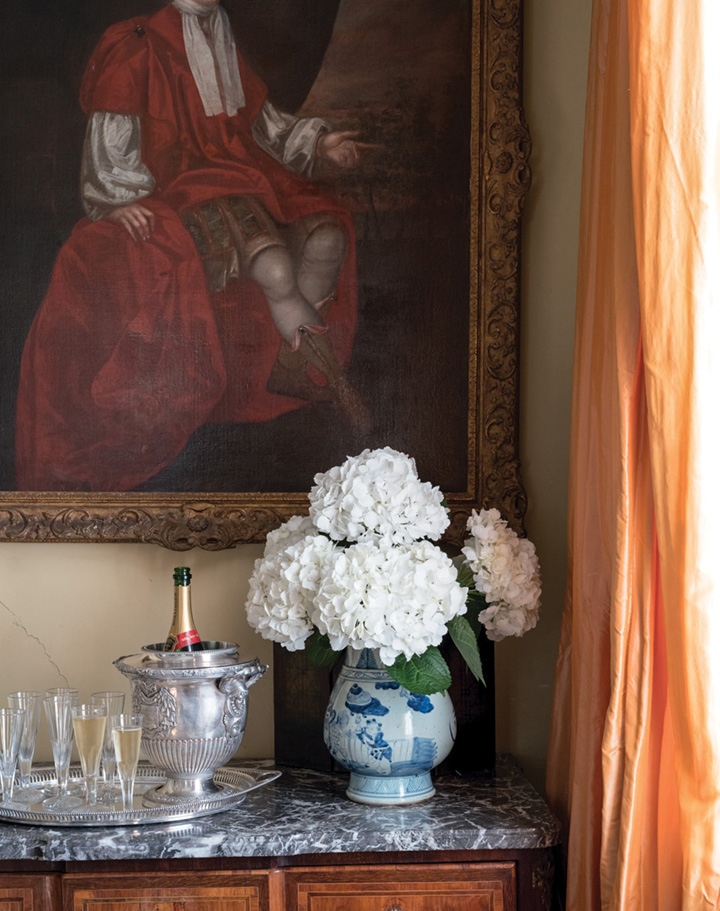 Hydrangeas plucked from the garden at Dunne’s country house 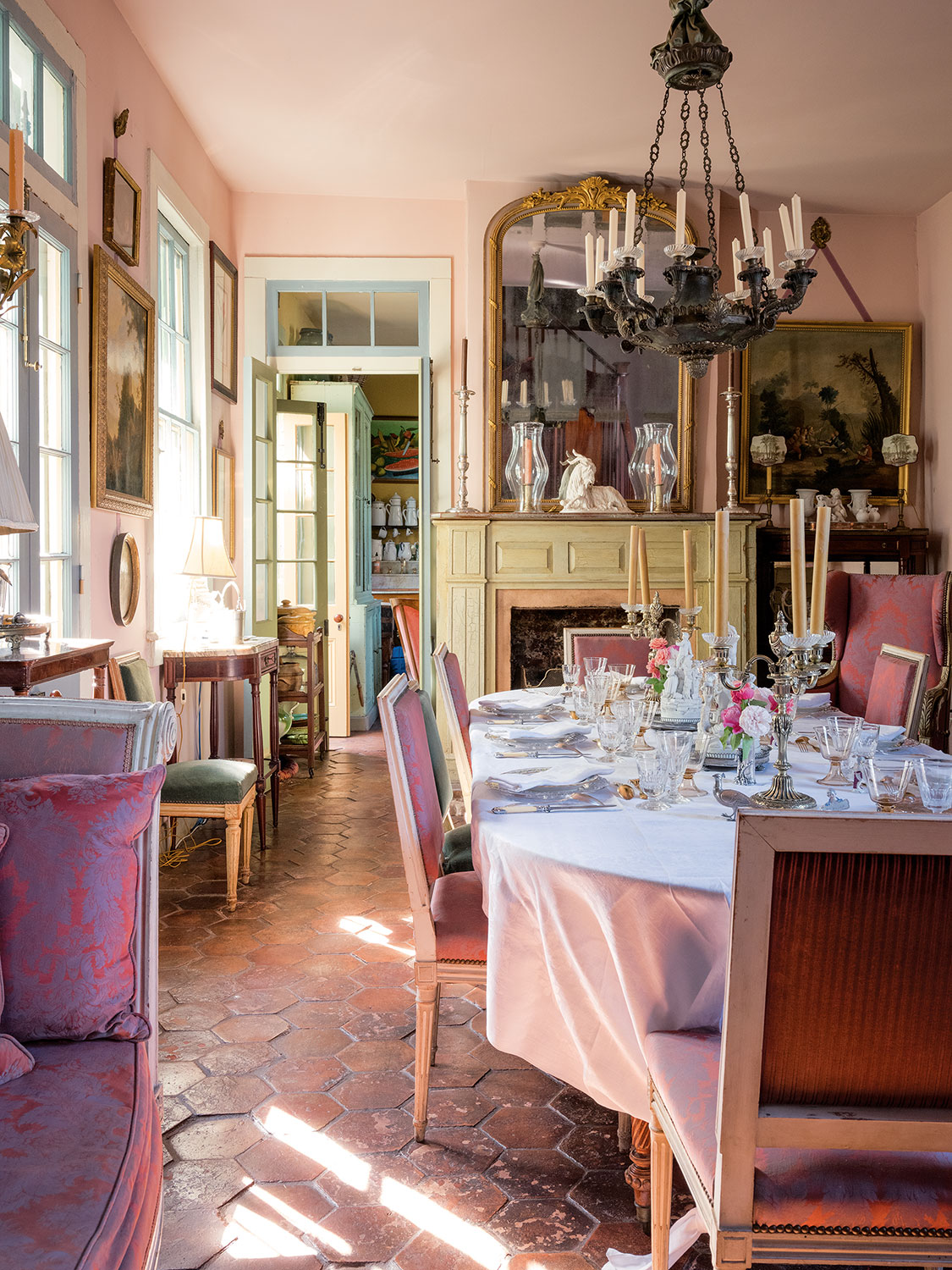 “I chose this particular shade of pink to flatter the complexions of the ladies at the table,” Dunne says. 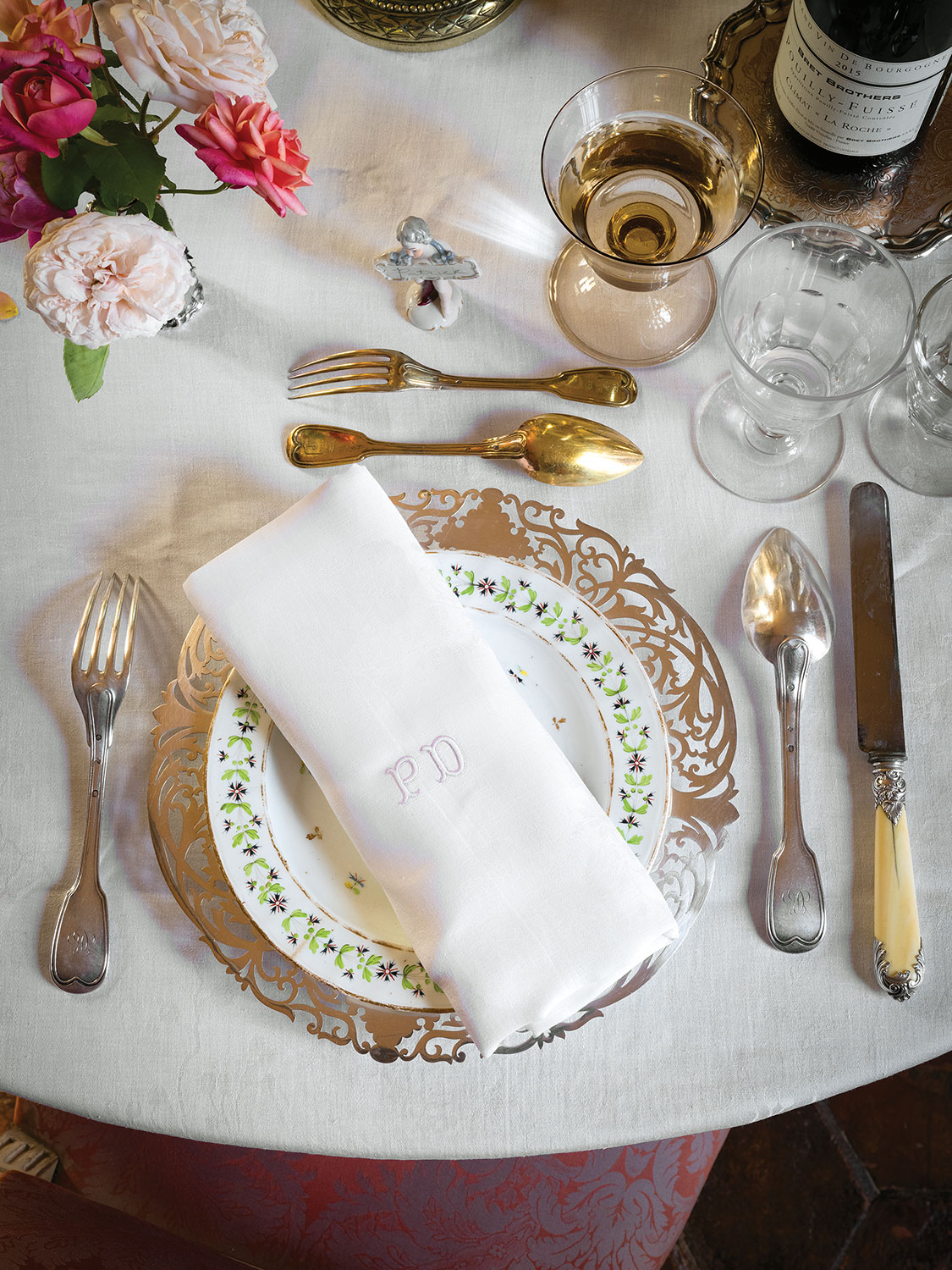 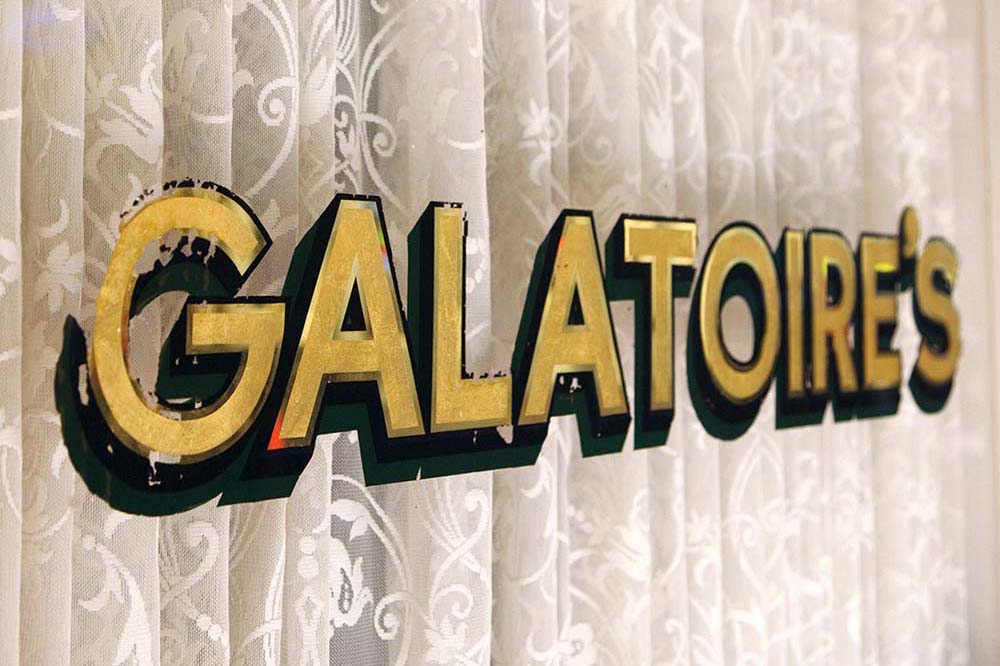 As a child, Reed and her family dined at Galatoire's any time they could escape to NOLA. 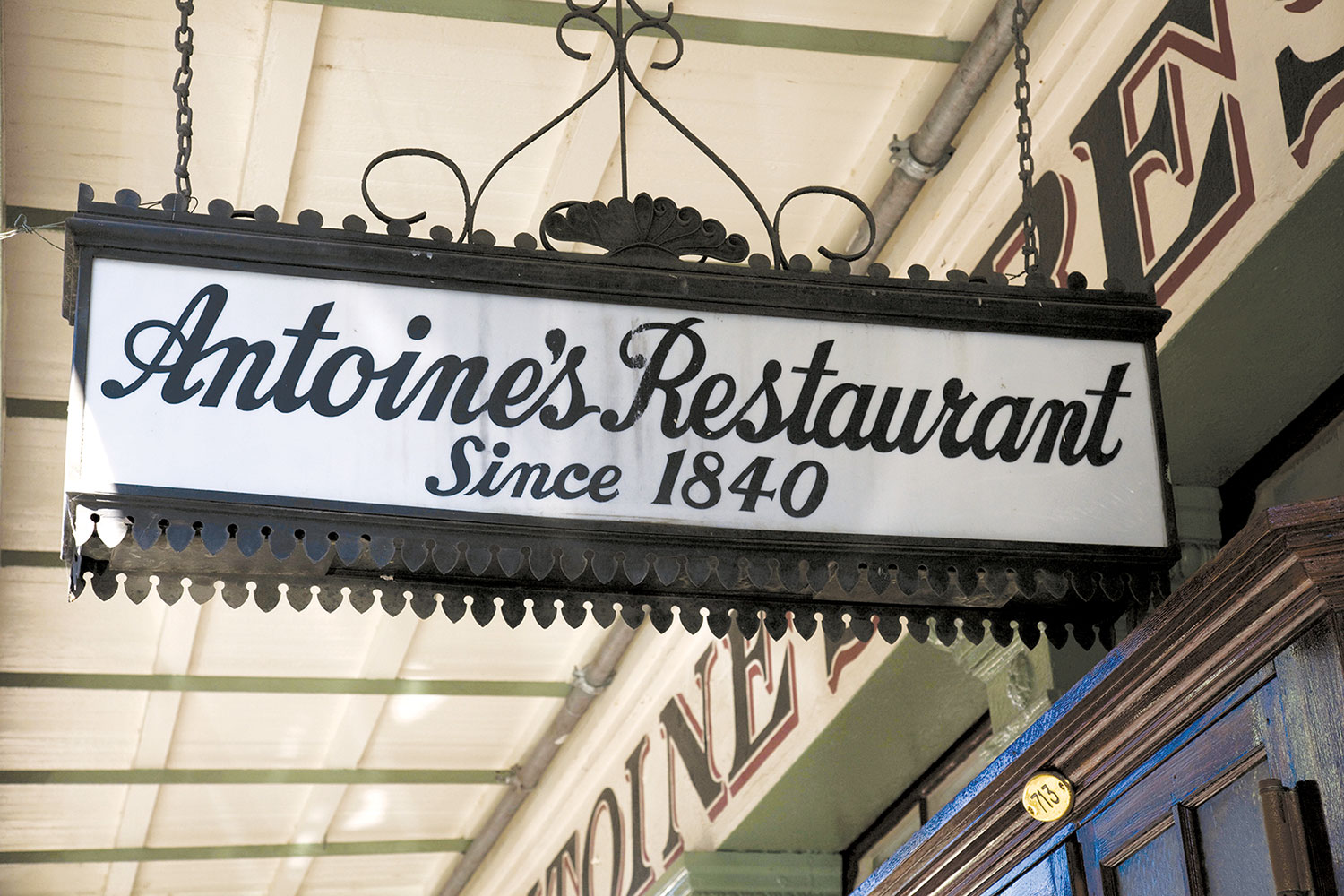