A Chat with Julia Reed

The author and hostess, who knows how to whip up everything from fried chicken to interesting conversation to a killer cocktail, discusses her love for the South, what makes a good party, and her book JULIA REED’S SOUTH (Rizzoli New York, 2016)

Flower: Julia, you’ve had a pretty varied journalism career, working at places like Vogue and Newsweek, and interviewing everyone from fashion designers to celebrities, to presidents and first ladies. How did you pivot to writing a cookbook?

Julia Reed: I’ve always been sort of a generalist, and yes, I’ve ended up covering a lot of politics, but I’ve never wanted to do only one thing. My mind is just too restless and there are too many things that interest me, including food and flowers—though I never thought I’d get paid for concentrating on that. But I kind of became an accidental food columnist for the New York Times in the early 2000s, and I ended up getting a couple of books out of those columns. However, this is my first “real” cookbook, with photographs of the food that I cooked, the table settings, and recipes that I’ve tested. I’ve traveled all over the South to shoot real parties in locations that have a lot of meaning for me. 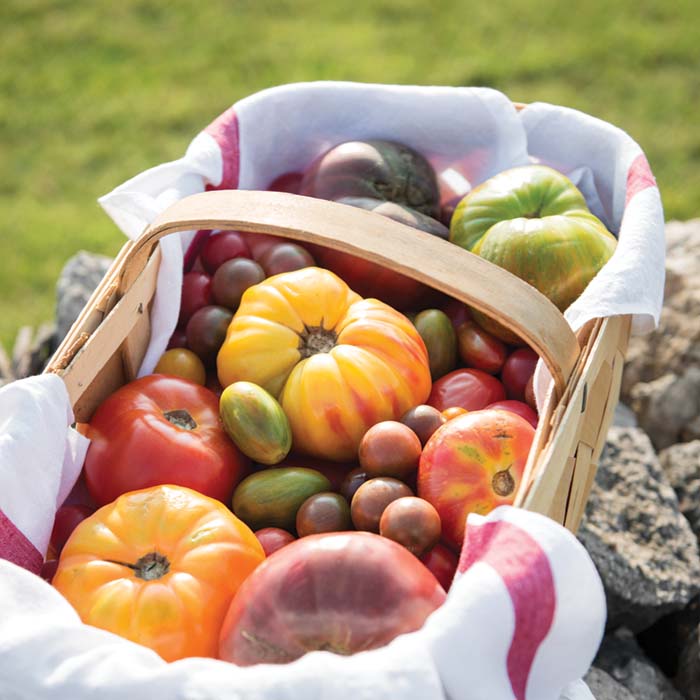 You’ve always remained so connected to your roots and been passionate about your love of the South. What is it that has kept drawing you back?

The Mississippi Delta, where I was born and raised, is a really magnetic place to me—there’s a lot of magic there. It’s where I really learned so much of what has always been important to me. I became a writer in large part because I was born in Greenville where being a writer was like being a plumber in a lot of other towns. We had a Pulitzer-prize winning newspaper, my next-door neighbor wrote for National Geographic, Shelby Foote was from there, as was Walker Percy. There is this tradition of letters, but there’s also a tradition of having to make your own fun. The ladies of Greenville, like my mother and her friends, are great hostesses, because it’s not like you can just book a private room at the 21 Club and take a big group of people out to dinner.

There’s a spirit of adventure I still get infused with as soon as I hit the Delta line. And the other thing is we come up with any reason to throw a party. Oh, the daffodils are blooming? Let’s have lunch on the lawn. The tomatoes are in? Let’s create an entire six-course dinner around tomatoes. What I love about the South in general is that there is nothing too small to celebrate, and if you’re really lucky you learn about grace and small joys, which are, after all, what make up big lives.

In the book you emphasize that entertaining is not about pretension, but about sharing a generosity of spirit. What would be your key piece of advice when it comes to creating a table setting and the ambiance?

I love to use everything. I have friends who have gotten married, and sometimes remarried, and still haven’t completely unpacked their wedding presents. Not me—I like to use my stuff and have fun with it. If the fine porcelain chips, it chips. So what are you going to do? I also incorporate things that make people ask, “What is that?” For example, I have all these antique wine rinsers that I pull out for everything from dishes for sauces to flowers, because I love low flowers on a table if we’re actually sitting down to dinner. I might use antique celery vases for the centerpiece and little silver ashtrays for salt cellars. I love repurposing old or rarely used tableware that’s considered a bit odd for how we live today. That’s how we keep all these beautiful things alive. 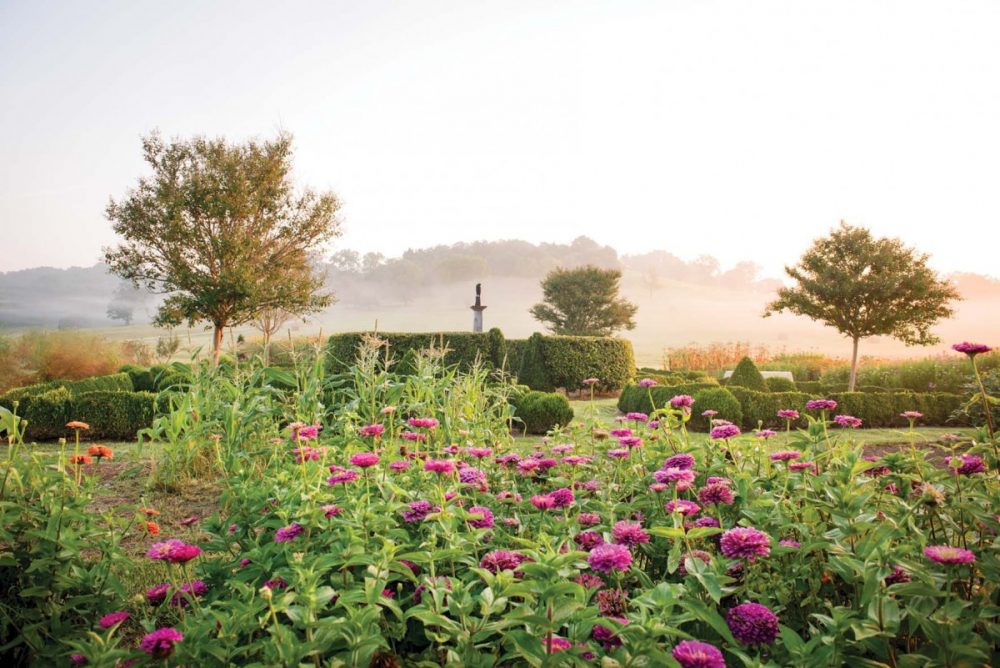 You also advocate for mixing inexpensive things with all the fine pieces. What does that bring to the table?

I believe anything can be a dinner-table prop, and having a little bit of fun and imagination goes a long way. For one of the parties we photographed, a fried chicken dinner, I found the cheapest blue-and-white tablecloth online for $5. But I’ll also use old fabrics, such as suzanis, antique ticking, or my great-grandmother’s really beautiful linens. For the dinner at Ben and Libby Page’s farm, fabric designer Peter Fasano wove that ticking, and it’s so beautiful, but a red-and-white checked tablecloth would have looked great, too. The china is my antique Blue Willow, but I included some serving pieces I picked up for almost nothing in various Chinatowns.

Tell us more about the party on the Pages’ farm that we’ve shown here. Ben Page is one of our favorite landscape designers, and also happens to be on Flower’s advisory board. 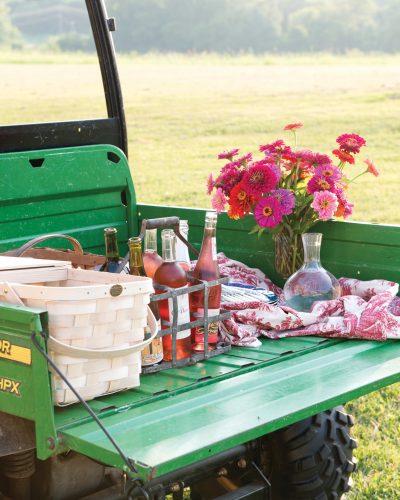 Well, Libby’s great-grandfather and mine were business partners—they founded an insurance company together in Nashville—and she’s like family. Ben designed the first garden I ever had and taught me so much. I’ve spent countless happy hours cooking with Libby in her kitchen, so it was a natural place for me to return.

We called the dinner Tomatopalooza, and the menu celebrated the garden tomatoes that were at their peak. It could also have been a very chic Fourth of July party. I love red, white, and blue, and not just because they’re patriotic colors. They also mix so beautifully with hot pink and orange, and that’s what I was going for with all the zinnias we cut from the garden. Ben designed these beautiful English parterres, and talk about mixing high and low—the parterres are full of zinnias, marigolds, tomatoes, and corn. So the setting itself is both formal and relaxed at the same time.

Before dinner Ben loves to load everyone in his John Deere Gator, and take us up to the ridge at the back of the property to watch the sunset. He revs up the motor, and we grab our cocktails and try to keep from spilling them all over ourselves. It’s a bit terrifying but we’re laughing all the way, and that glorious sunset is always worth it.