Salt is the oldest known seasoning for food, and has appeared in a place of prominence on the dinner table since antiquity. In humble homes, the usual vessels for salt were simple wooden trenchers; in more affluent homes they might be of pottery or glass or (later) porcelain. The wealthiest of homes had salt presented in large and fantastic centerpieces of gold and silver.

Few people could afford such extravagance, though, and among the wealthy post-Renaissance merchant class, silver became the medium of choice for the dining table. Known as “trencher” salts, these more functional salt cellars followed the general form of the wooden trencher. These could be circular or oblong, waisted or paneled; by 1700 a canted rectangular form known as the “four square” had become the norm.

The advent of the rococo saw a great change in form to the silver table salt in the 18th century.  Salt cellars were raised on three legs: at first made of simple scrolls with pad feet, and later with elaborate fanciful rocaille and shells. This form, with a bulbous circular bowl, was known as a “cauldron” salt cellar because of its resemblance to the cooking vessel.

Another innovation in the 18th century was the introduction of a glass or gilding lining.  The beauty and value of silver is beguiling indeed, for is it a very poor choice to hold salt, which is very destructive to silver. Salt, with moisture, can lead to permanent black spotting, pitting or complete corrosion to silver; a glass liner or gold wash on the interior would protect the salt cellar from this damage. (Even so, it is a good idea never to store salt in your salt cellars or shakers, and to empty, wash, and completely dry them after each use.)

Liners were often of a brilliant blue glass made with the addition of cobalt oxide, sometimes called “Bristol” glass after the English city where it was popularized. Neoclassical designs in the last quarter of the 18th century showed this glass to great advantage with the silver pierced and cut with intricate geometric designs revealing the rich blue glass underneath. 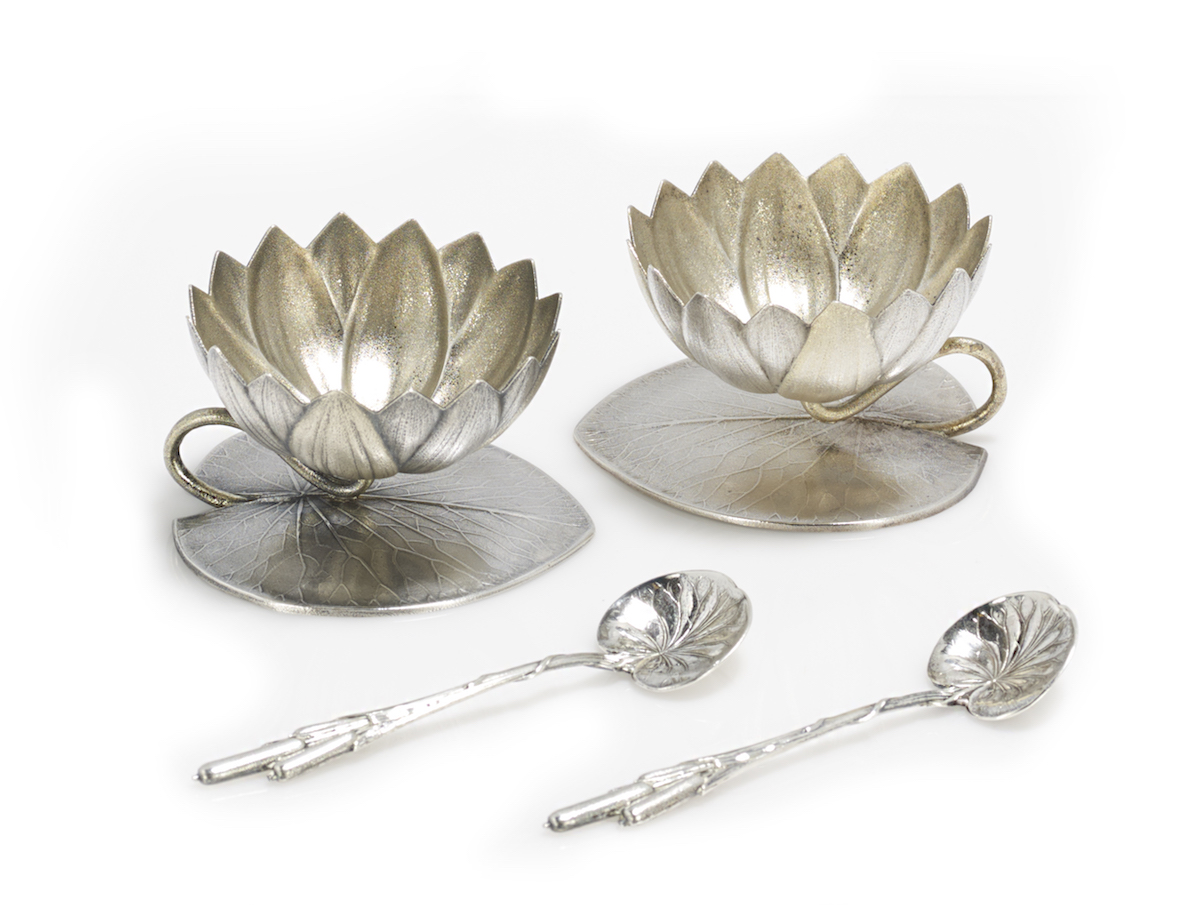 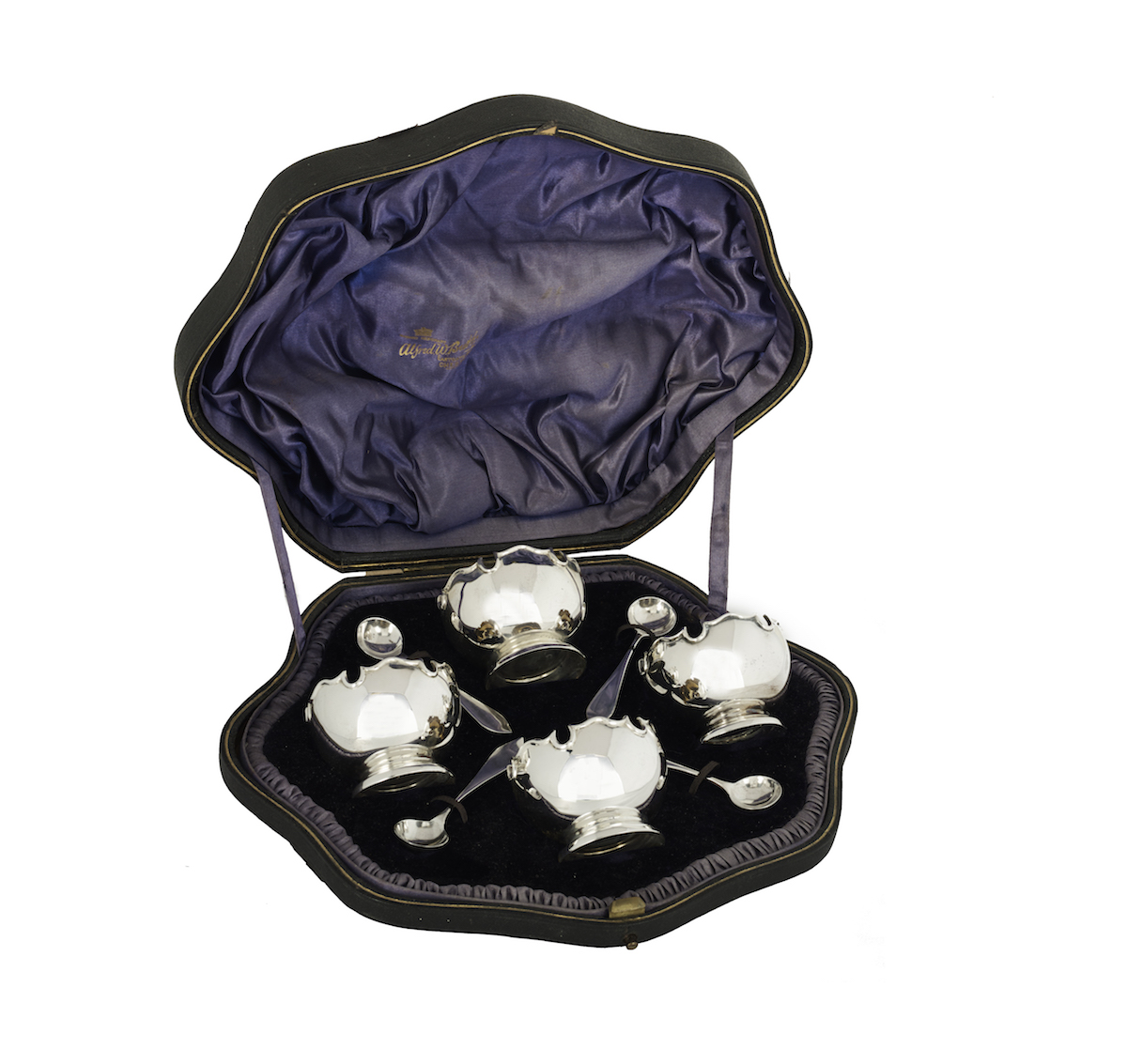 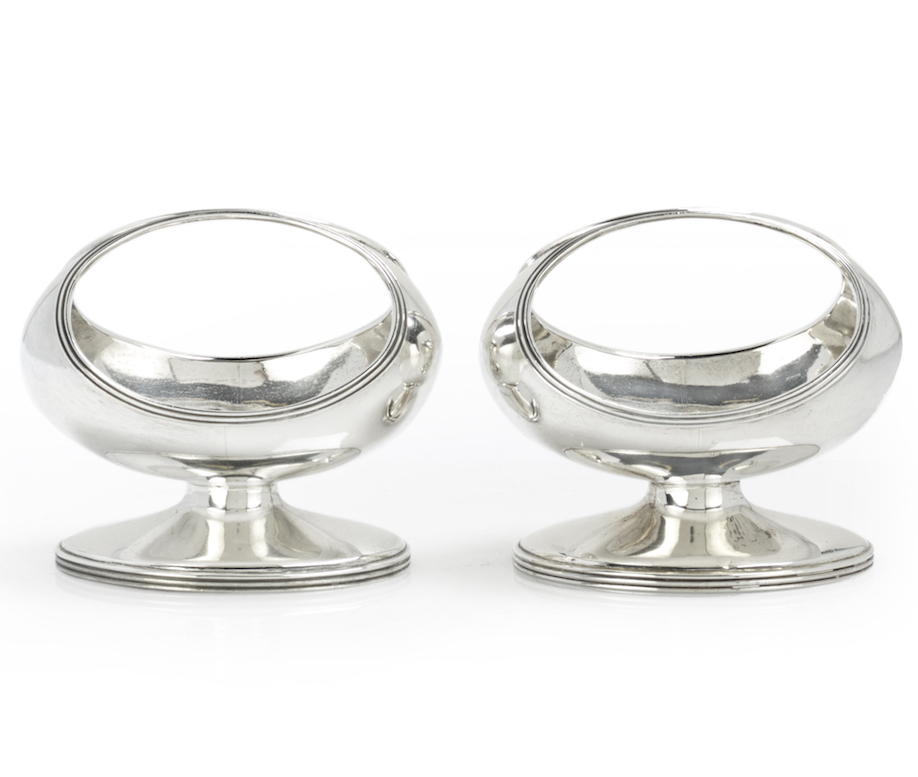 In the 19th century, silver salt cellars followed the fancies of Victorian eclecticism and whimsy, appearing in a seemingly endless variety of forms – shells, crowns, flowers, birds, animals, carriages, etc. – often with matching salt spoons. (Salt spoons had been an innovation of the late 18th century, a refinement more of aesthetics than hygiene; “a pinch” of salt was still the common serving.) American manufacturers, with their innovative and efficient production techniques, were at the forefront of this era of novelty, and none was more prolific than the Gorham Corporation of Providence, Rhode Island. Founded in 1841 by Jabez Gorham (1792-1869), the company was well-known by the 1880s for its Japanese-inspired “Aesthetic” designs which combined natural motifs with mixed metals.

20th century innovations, including anti-clumping agents for salt and household climate control, saw the traditional salt cellars replaced by the modern salt shaker. The open salt is now generally seen on the most formally-set dining table. But these small and relatively inexpensive silver antiques remain a popular collector’s item, admired for their artistry in miniature and their simple functionality; they can serve not only as dishes for salt and other condiments, but also pins, jewelry, paperclips and any number of small tabletop items.

Disclosure: Some of the links on this site are affiliate or sponsor links, meaning, at no cost to you, Flower may earn a commission when you click through and make a purchase.

Bring the Colors of Nature Indoors with Paint
The Secret to Bespoke Interiors
Chic at the Beach: Weezie Towels
Visions of Sugar Plums in Palm Beach
Jason Burnett / About Author
More posts by Jason Burnett