This New Orleans antiquarian, decorator, and all-around bon vivant believes the recipe for gracious living in the 21st century boils down to history 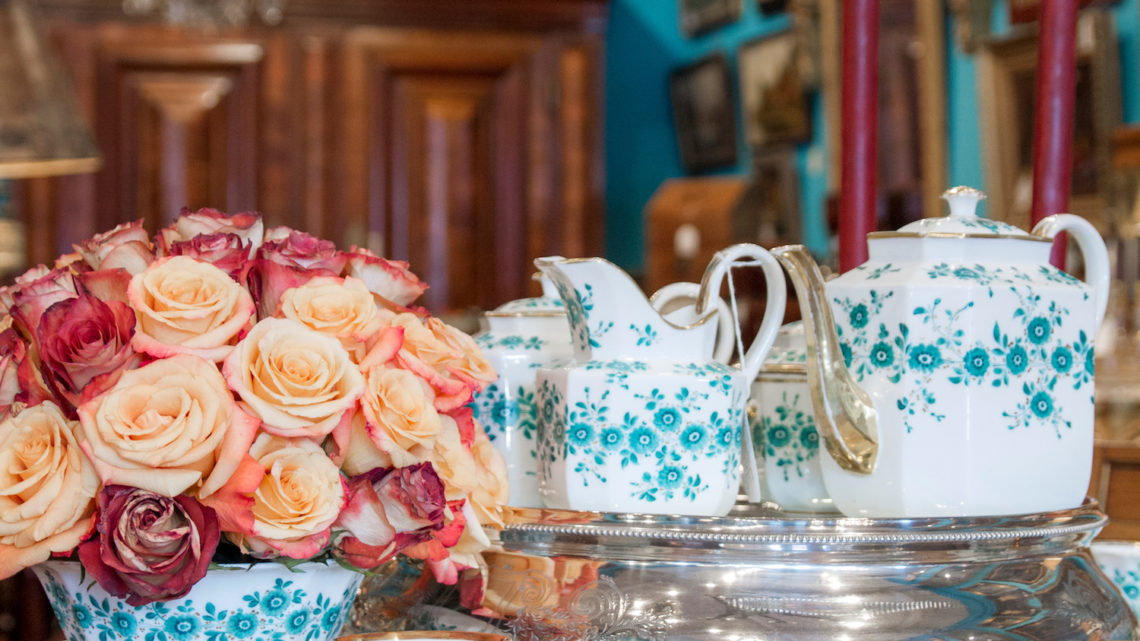 Flower: Patrick, you hold advanced degrees in history, own a fabulous shop dedicated to culinary antiques, and also decorate houses. That’s quite a range, but it’s clear that the common thread is your deep connection to the past. Where did that originate? PATRICK DUNNE: First and foremost I consider myself an antiquarian and historian, and I just happen to do decorating. I went to Georgetown for my undergraduate and graduate degrees in intellectual history, and living in D.C. was a very formative experience for me because I spent just as much time walking the streets and studying the Georgian architecture as I did studying in the library. It was around that time that I decided I was much more comfortable around things that are old. I am happiest in old cities, old homes, and old gardens. It’s not that I am antimodern. I do love the ability to turn on the faucet and have a hot bath, and to have an anesthetic when I’m at the dentist. But I feel that if you don’t connect to the beauty and sadness of the past, your life will be one-dimensional and that’s dangerous. My favorite aspect of decorating is to create a story for a room, a story that makes sense for its inhabitants and a story that links them to both the elegance of beauty and to a past—their own personal past and the past shared experience of our collective aesthetic expression. 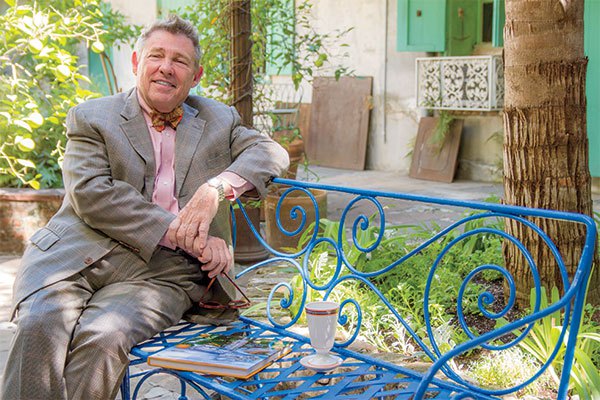 Tell us a little more about your own personal history. We understand you’re a sixth-generation Southerner. I am of Irish decent and grew up in South Texas near the Mexican border. My father’s family had been there since the 1830s. He was the youngest in his family, and so I spent my youth in the company of older people. The ladies in my life, particularly my mother, aunts, and grandmother, made their lives as romantic as the materials allowed. Nothing was ever ordinary, and there was never a distinction between the everyday and the festive. My mother always set the table with silver, and my father always wore a coat and tie to dinner—even during the sweltering summer heat.

So that’s where you cultivated your love of beauty and entertaining. How did that lead to decorating? I suppose I’ve had the decorating instinct since infancy. The first gift I remember receiving was a rocking chair, and it was always very important where it was placed on any given day. During the time I was growing up, children suffered under a rubric of being seen and not heard, so I would sit in drawing rooms studying the furniture, curtains, and objects, and would sometimes rearrange them in my fantasies.

As I grew older I began trying my skills on our house, which was a challenge because everything was fixed in eternity. That was the chair the bishop sat in, that was the table some great-aunt had sobbed on when jilted—that sort of thing. My greatest triumph was when I redecorated our library, a room my father almost never penetrated. It had been completed when he appeared one day at the door and nearly collapsed. He didn’t look at it again for nearly a year.

The greatest lessons I got in those days were from an old cousin who had fabulous rooms, rooms that still influence me. She asked me what was the most important thing in a room, and silly me said, “Color.” “Oh,” she said, “you are as stupid as a fish. Of course not. That is least important in a great room. Scale!” she shouted. “Scale, then balance, then color.” She had the first Knoll sofas I had seen, and I still love them. 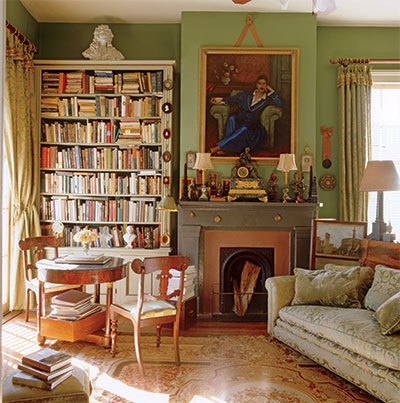 Patrick Dunne’s New Orleans library exhibits his penchant for living and decorating with things that have history, beauty, and soul. | Photo by Simon Upton/The Interior Archive

Now let’s talk shop for a bit—your culinary antiques shop, Lucullus. It’s a treasure trove of rare and unusual curiosities, from the most primitive skimmers to the most elaborate saltcellars. Where did you get the idea to open the store? When I moved to New Orleans from Georgetown, it struck me that the city was known for two things—exquisite antiques and delicious food, which, coincidentally, were two of my father’s greatest loves. Years later, after a few bottles of wine during a long dinner with friends, I got the idea to combine the two, and Lucullus was born. 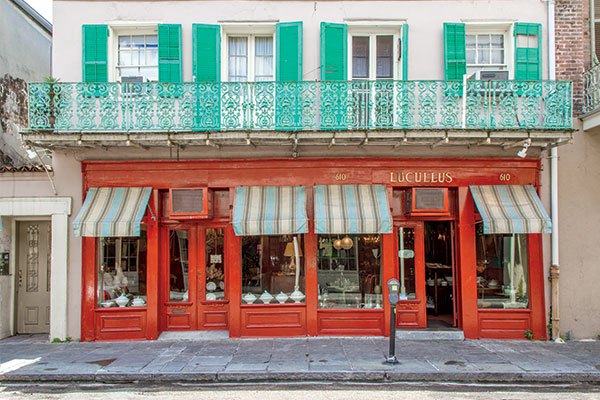 The exterior of Dunne’s brightly-colored New Orleans shop, Lucullus. When shoppers step inside, they couldn’t be blamed for thinking they’d landed in the heart of France. | Photo by Stephen Young

With such rich history and culture, New Orleans seems to be the perfect place for you. Tell us about your house there. I live in a 19th-century Creole townhome located in Faubourg Marigny, a historic neighborhood downriver from the French Quarter. My country home, Serenity, is west of New Orleans in bayou country and was also built in the 19th century. I also have a little apartment in Lyon, France.

Are there any go-to floral fabrics in your decorating repertoire? No, I let a room decide what should go inside of it. For instance, in my bedroom at Serenity, I have linen curtains with big, faded cabbage roses on them. I chose them because that window looks out onto my rose garden—although my roses are not quite as big as those on the curtains. That said, right now I am very into William Morris’ historic wallcoverings and textiles, many of which are floral. And I am always drawn to chintz. I grew up around it, so it’s a very nostalgic fabric for me. I have to say, though, that most of the floral motifs in my homes can be found in my porcelain collections. My dinner service is Barbeau, which was Marie Antoinette’s pattern that became popular throughout the Francophile world in the 18th and 19th centuries. It is white with delicate blue cornflowers that dot the surface to hide the imperfections in the porcelain. I like it because it’s clean and more of a masculine, unfussy floral. 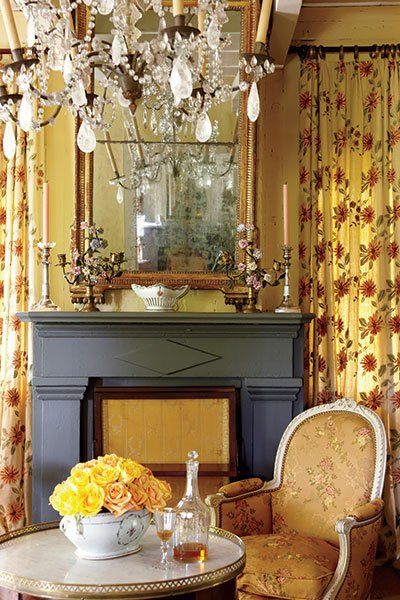 The roses that Dunne attempted to grow for many years in his New Orleans garden thrive in abundance, both inside and out, at his house in the country. | Photo by Brie Williams

Why do you think that flowers have had such a tremendous impact on epicurean artifacts and the decorative arts, and why do they continue to be a source of inspiration? It sounds like a complex question, but the answer is quite simple. The symbolism associated with flowers goes back to the ancient world, and its power remains strong today because of its profound spiritual meaning. A flower is a living thing whose beauty is fleeting, making it a reflection of our lives.

Finally, do you have any tips for arranging fresh blooms in any of the interesting pieces that can be found on your table and in Lucullus? I’ll often fill a coupe de mariage, a large silver goblet used for wedding toasts during the 18th and 19th centuries, with a big mound of roses. I also love the look of buds placed in tiny silver goblets called timbales that were traditionally given to young men on their 18th birthdays. A collection of those looks magnificent trailing down the center of a table. For a more rustic look, I love burnished-copper cooking pieces filled with wintry or dried arrangements. 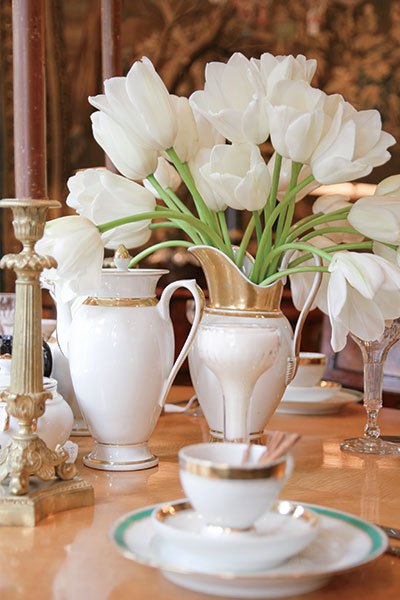 Dunne has to look no further than his shop, Lucullus, for interesting floral containers, including this 19th-century pitcher that holds French tulips. | Photo by Stephen Young

Get to Know Patrick Dunne

Favorite flower . . . Roses fresh from my garden at Serenity. If I have to buy them, though, I buy the older ones so they look as though they’ve just been picked.

Obscure culinary antique I’m dying to get my hands on . . . A knife cleaner. It doesn’t sound very glamorous, but it’s a big wheel with a crank used to polish and sharpen steel knives in the 19th century.

Most treasured family heirloom . . . A silver spoon from the 1890s that my grandmother used to feed me with as a baby. It is heavily embossed with daisies, and when I am feeling melancholy, I use it to eat my morning oatmeal and it’s an instant pick-me-up.

Chef I’d want to have cook at my next dinner party . . . My close friend John Folse. Not only would the food be heavenly, but also the conversation would be devilish.

My closet is full of . . . Moths! And bow ties and ascots. I wear neckwear for dinner no matter where I am going.

My pantry is stocked with . . . My favorite duck confit from France made by nuns near the Pyrenees. And tomato preserves made from those grown in the garden of my country house. They’re so sweet you’d think they were strawberries.

More to Love in New Orleans