Inspired by botanical drawings of centuries past, Moore takes the flower on a more graphic path in painting that creates a modern portrait of the blossom

JOHN MATTHEW MOORE’S IN-YOUR-FACE paintings of flowers walk the line between demure botanical renderings and graphic portraits of the essence of a blossom. Focusing on the face of the flower, Moore paints photo-realistic representations that capture shadow and light, color nuances, water droplets, and the subtle veining on a tulip petal. “While botanical illustrators draw with precision and such a meticulous eye to get everything right, I do the same, but I also try to get at the soul of the flower,” he says, maybe a little sheepishly. “Listen, I know that these are plants, but they are alive, and no two are alike. And that’s what my work shows.” Stems and leaves are only occasionally a part of the picture. “Scientific botanical drawings are beautifully stagnant,” he says. Moore’s images virtually move on the paper.

Such simplicity, beauty, and motion have made Moore a favorite of decorators and collectors around the world, as he sells paintings and takes commissions in his adopted home of Washington, D.C. He didn’t take the traditional route for an artist, but his background has served him and his aesthetic interests well. “I had a full scholarship to art school, but after a year I left. I just wasn’t challenged enough,” he says. He stepped away from art and tried his hand at other careers—learning business and management— but ultimately the art world pulled him back. Moore began working with Franya Waide in her renowned interiors and antiques enclave in Atlanta. “I had started painting flowers, and I brought a few into work,” he says. “A decorator came in and bought one and commissioned more. Things just took off from there.”

Ever since, he has always worked with designers rather than pursuing the more traditional artist-in-the-gallery experience. “I love design, and I’m drawn to seeing my pieces in a space—how they work with the room,” says Moore. Tastemaker and author Danielle Rollins owns several of his paintings. “I bought four of Matthew’s oversize tulips that now hang right outside my kitchen. I’m attracted to their graphic quality and the softness—that tension is so appealing. They have a great energy, which comes from the art, but also from the artist,” says Rollins. “Matthew has such a gentle nature, and it comes through in the beauty of his paintings.”

Moore’s art, which he sells both as paintings and limited-edition prints, stems from his childhood. “I grew up on a farm outside Claxton, Georgia, and it’s surrounded by woods. I spent hours on long walks and would simply pick up leaves, wildflowers, and such and study each,” he says. “If I were born 300 years ago, I’d have spent my life on a ship documenting plants and wildlife all over the world.”

Though he is best known for his depictions of tulips and similarly beautiful face flowers, Moore’s work has also veered in other directions, inspired always by his interest in the natural world. He has created series of shells, eggs, farm animals, and porcelains. And he has developed a method to represent the uniqueness of each object. “I take photographs because my paintings take days to execute, and I get commissions all year long, but certain flowers only bloom in certain seasons,” he says. The images help him create accurate drawings, and then he layers on the colors. By pulling out a single blossom and focusing on it as an object, the intense color and the scale is magnified; the form becomes sculptural.

Moore’s work has always been steeped in the traditional approach to realism. Recently, however, he has a new body of work that veers in a slightly more modern direction. He creates pieces that reflect the lines of the flower rather than the color. “I paint in relief with gesso or flat paint and then gild them with 12-karat white gold or 23-karat yellow gold,” he says. He depicts other flowers on a colored background—often a rich brown or a soft blue—painting them in white gouache to create a striking contrast.

Whichever approach Moore takes when he begins a new painting, he lets the spirit of the flower—its form and its essence—stir the creativity within. “Even when there is a photograph to start me off, I let the image form in my head before I start to paint. I compare it to writing down a vivid dream. It just doesn’t work,” Moore says. “You can’t force it. Let the art happen organically.” 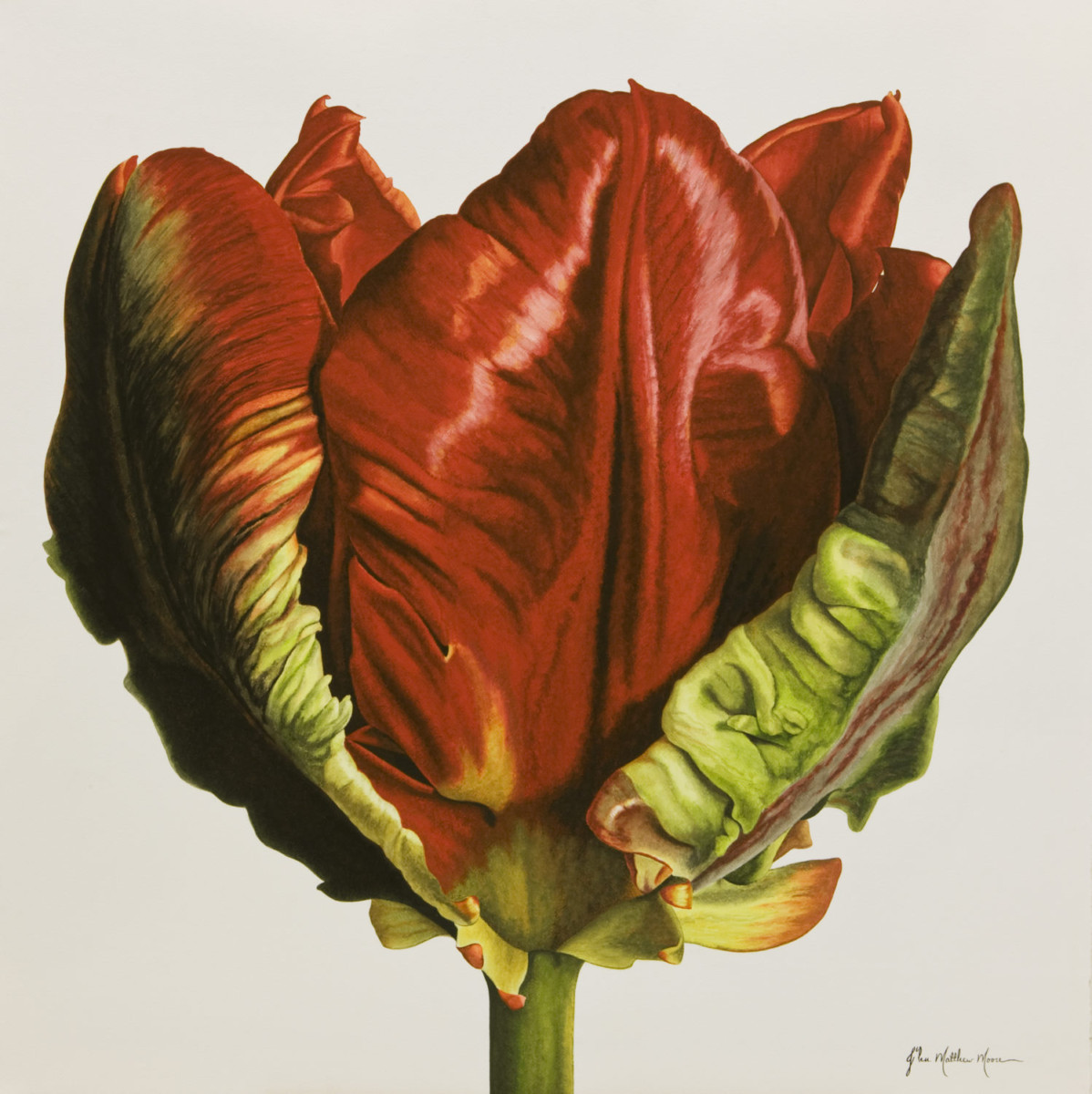 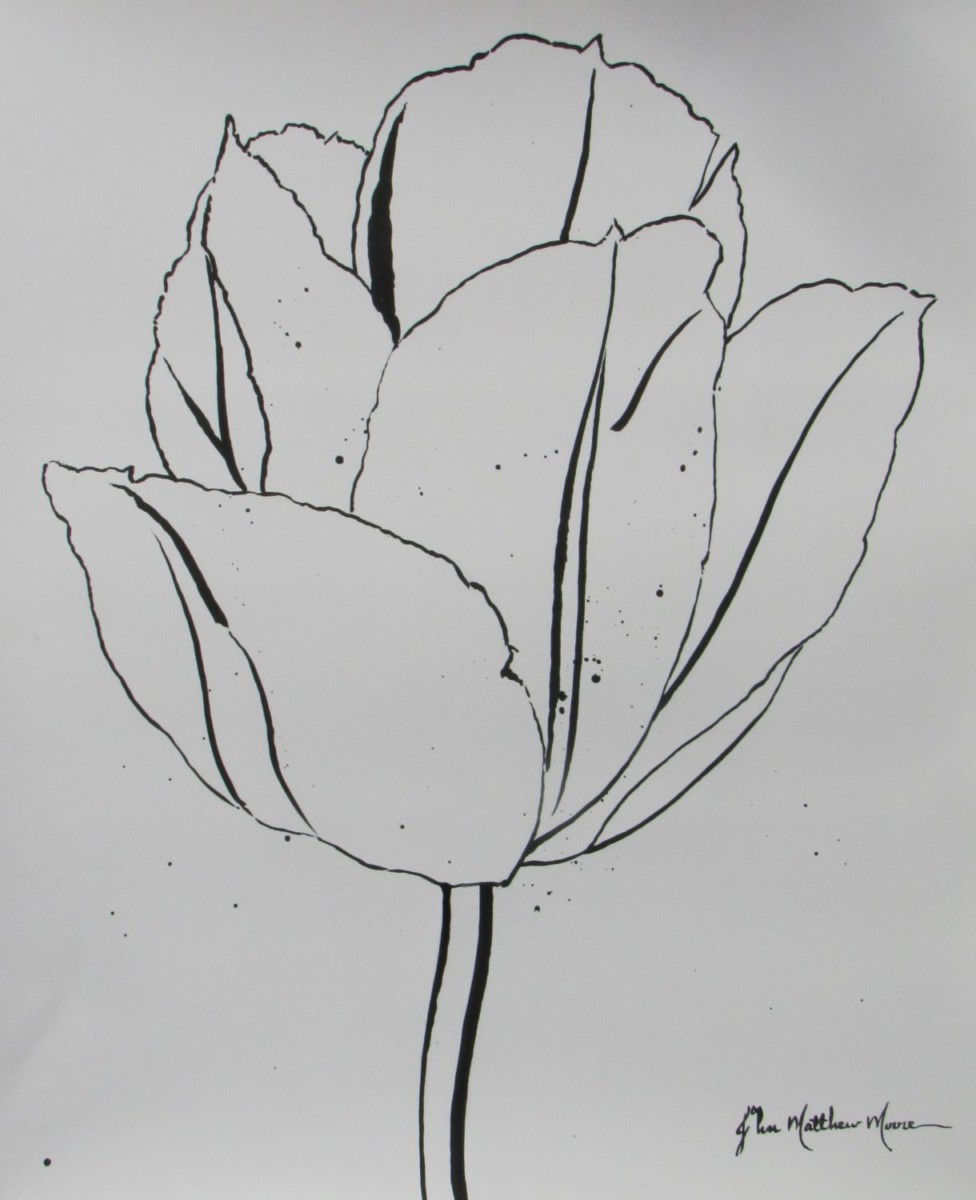 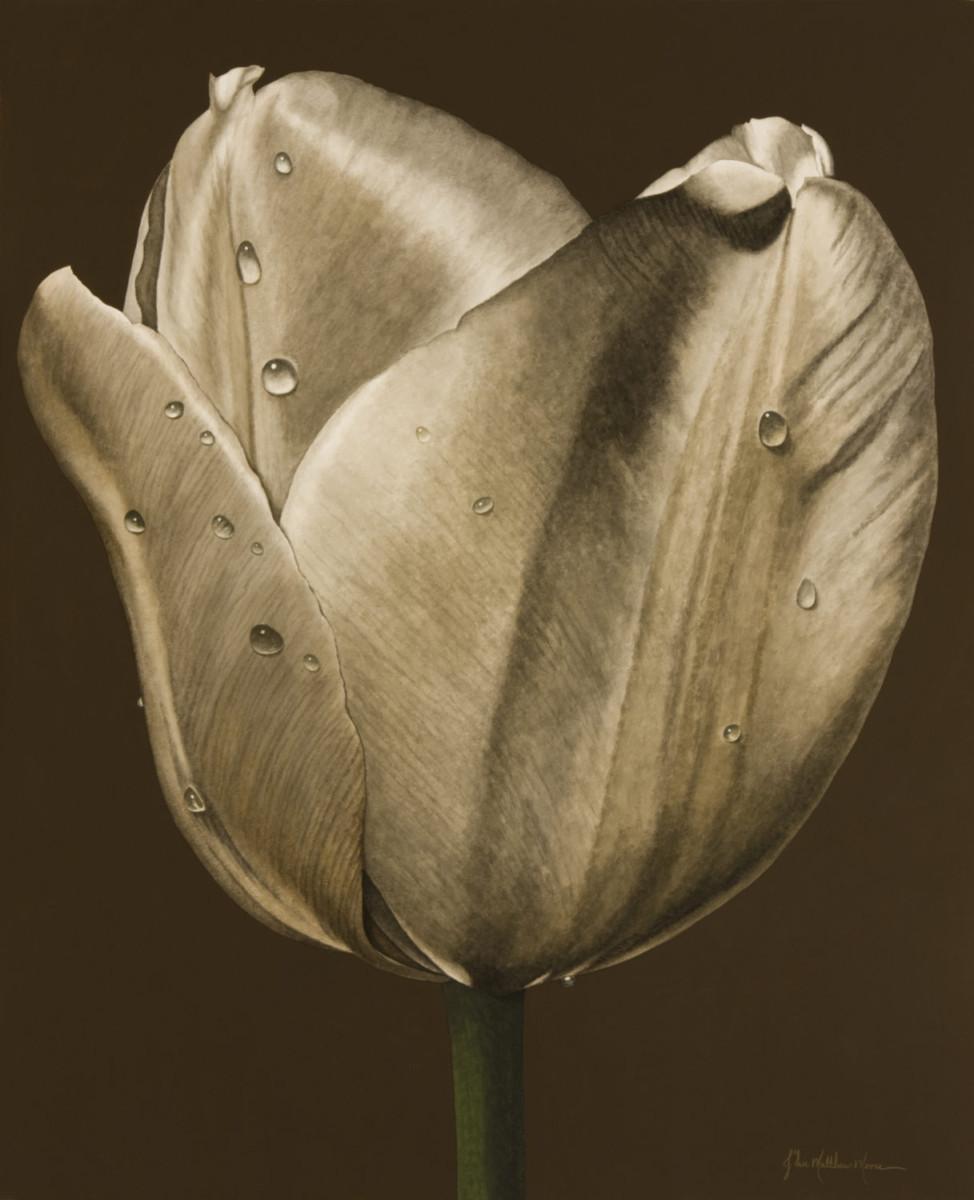 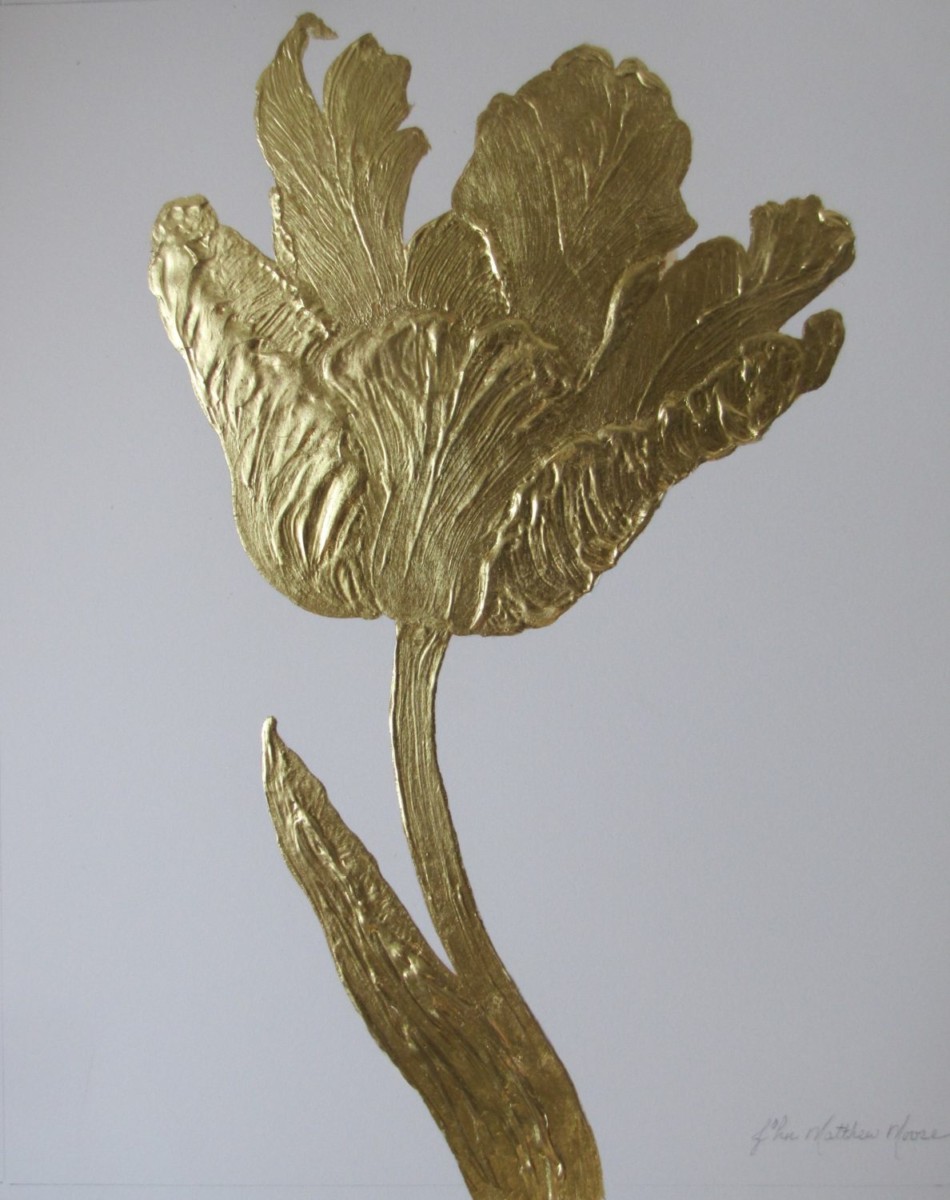