Take two parts fairy tale, add one part tulip and one part butterfly, fold in a schloss in Austria and a French book on chinoiserie, and perhaps you may get a tiny taste of the world that informs the work of artist Harrison Howard. It is a world of stylized fantasy that allows your mind’s eye to run free as you take up residence where headdresses are made of flowers, trees sprout butterflies, and seashells must be tended in an underwater greenhouse. Howard’s creativity and copious imagination had deep roots from the start. He had a working-artist father, lived and traveled abroad at a young age, and was steeped in his family’s bon vivant attitude toward life. “During my childhood, my parents’ lives revolved around their joint interests in art, antiques, and traveling,” says Howard, who now lives in San Diego. “I had little idea as a child what an unusual life our family led.” His family’s farmhouse in Bucks County, Pennsylvania, with a garden, orchard, and woods, is also part of his earliest memories. “I recall beds of tulips and peonies that interested me even more so because of the butterflies and cottontails that appeared there,” he says.

At age five, his family moved from Pennsylvania to Europe, living in a house near Antibes, which made an indelible impression on him. “I remember the smell of the acacias in bloom and the roses with great clarity. It is no wonder that flowers became such a large part of what I paint,” says Howard. “Among flowers, tulips hold a special appeal for me just as some people are attracted to certain colors.” In addition to nature, literature is a critical influence for the artist. “I had a huge appetite for reading, and all the fairy tales and other types of stories that I consumed served as endless fodder for drawing pictures.” His love of chinoiserie also sprung from books, beginning with a collection of chinoiserie motifs by the French painter Jean Pillement that he found in his father’s studio.

Howard had his first art show in La Jolla, California, when he was only 19. He sold all but one of the 24 watercolors, which depicted imaginary themes with insects, flowers, birds, shells, animals, and ideas derived from traveling with his family. One painting from that exhibit was inspired by two summers spent at a schloss in southern Austria when he was a teenager. “It was a white spoonbill standing on the spiral staircase on top of a tower. The painting really made little sense, but I could have sold it several times over,” he says. “The schloss had an immense attic filled with bats, and in one of the towers, there was a huge stuffed crocodile that came from who knows where, but it got me later thinking about other exotic animals that might fictitiously inhabit the attic, including the spoonbill.”

Despite his early success, years of art school, and supportive parents, Howard still had to find his place as an artist. “It wasn’t until I was in my 20s,” he says, “that the reality finally hit me that making a living as an artist was going to be a lot less secure than if I had demonstrated an aptitude for investment banking!” In 1980, Howard started painting murals commissioned by interior decorators for private homes. The work, however, proved grueling physically, and it necessitated being away from home for months at a time. He realized he was missing his son, Alec, growing up. By 2000, Howard was out of the mural business while his son was still school-age. He gradually eased into doing smaller works, and then began to make prints. He has worked in many mediums, but today enjoys creating almost exclusively in watercolor and gouache.

Howard and his business partner, Justin Nangle, own tigerflowerstudio.com, a website devoted to showcasing and selling limited-edition prints of artists in the decorating, fashion, and textile fields. He has a licensed line of paper goods with Caspari, needlepoint canvases with Art Needlework, has flash sales on One Kings Lane, and recently debuted a line of home-furnishing fabrics with PK Lifestyles. “Everyone who sees Harrison’s work is totally bewitched and enchanted,” says Pamela Maffei Toolan, vice president of design for PK Lifestyles. “So many things appealed to us about his art—first and foremost was the fantasy and whimsy coupled together with an air of elegance and sophistication. Also, his use of color is very pristine and clearly depicted.”

Hutton Wilkinson, the well-known Los Angeles interior designer and president and creative director of Tony Duquette, Inc., is also a great fan. “I think his work is extraordinary, original, fresh, very alive, and modern,” says Wilkinson. “If I could have Harrison do everything possible for me, I would. I think his work is made to be applied in all decorative applications from fabric to wallpaper and more.”

Indeed, Howard’s well of creativity knows no limits. “I see inspiration all around me every day, and my mind has become so saturated with things that I’d like to paint or design that there is never enough time. When I paint, it is not work at all,” says the artist. “I would love to paint almost without interruption because it provides a level of gratification that is greater than any other work I could ever do.” 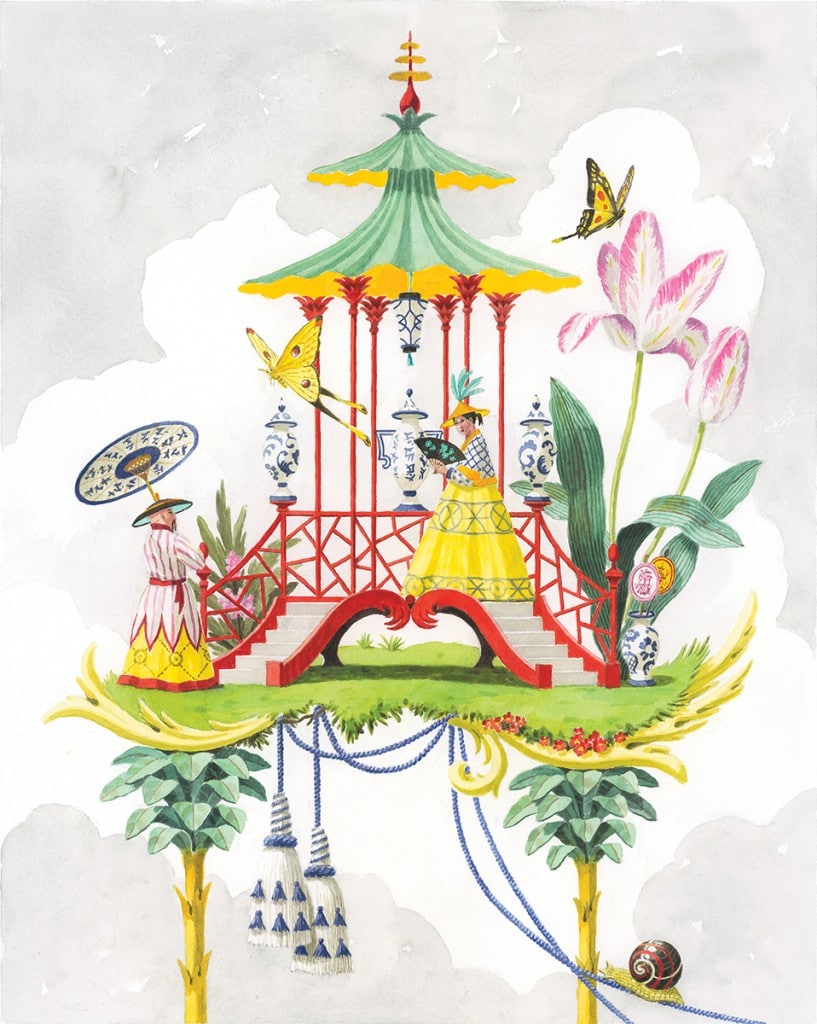 The_Courtship_CMYK-817x1024
Chinoiserie, which Harrison Howard discovered as a child, continues to attract him because of “its fantasy, diversity, and historical context,” as exemplified in The Courtship. 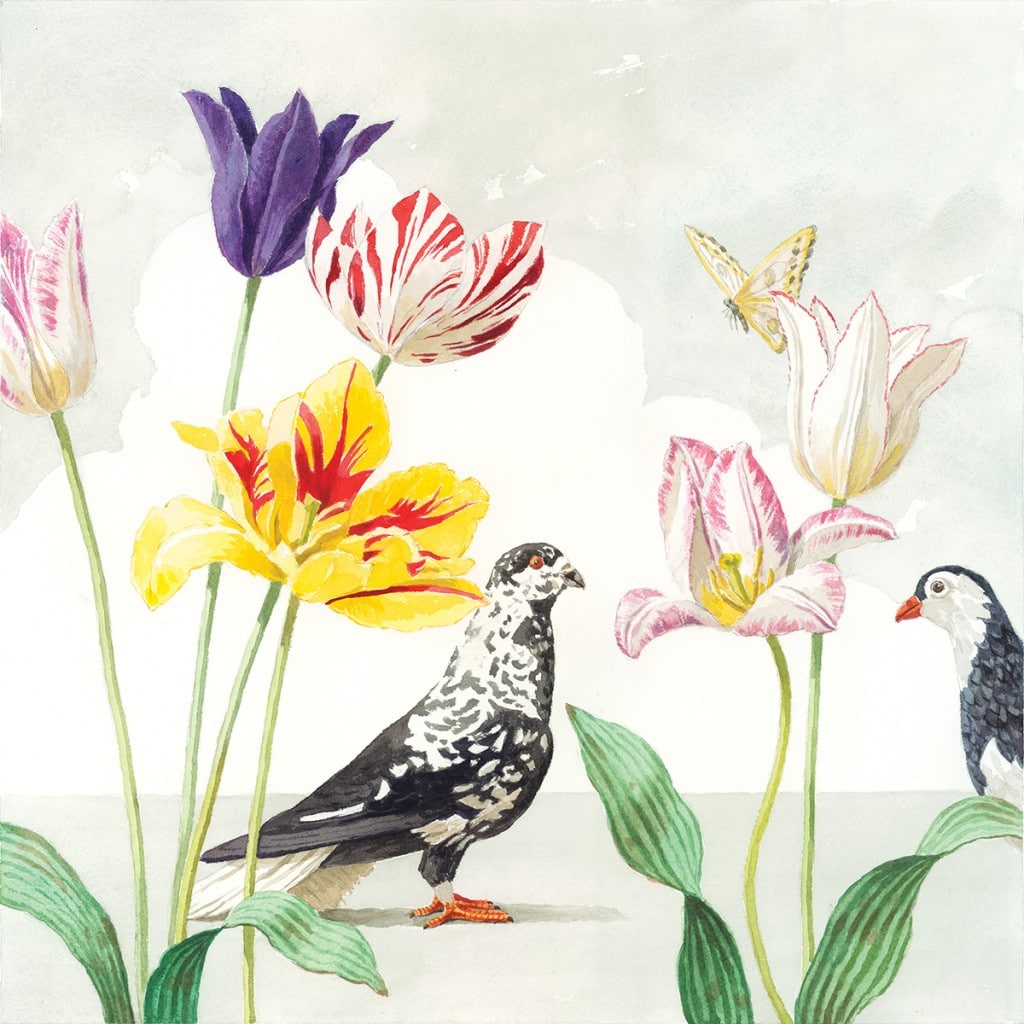 Tulips_with_Two_Pigeons_CMYK-1024x1024
His appreciation for plants and animals started back as far as he can remember and are an ever-present source of inspiration. Tulips are a particular favorite and appear frequently, as seen here in Tulips with Two Pigeons. 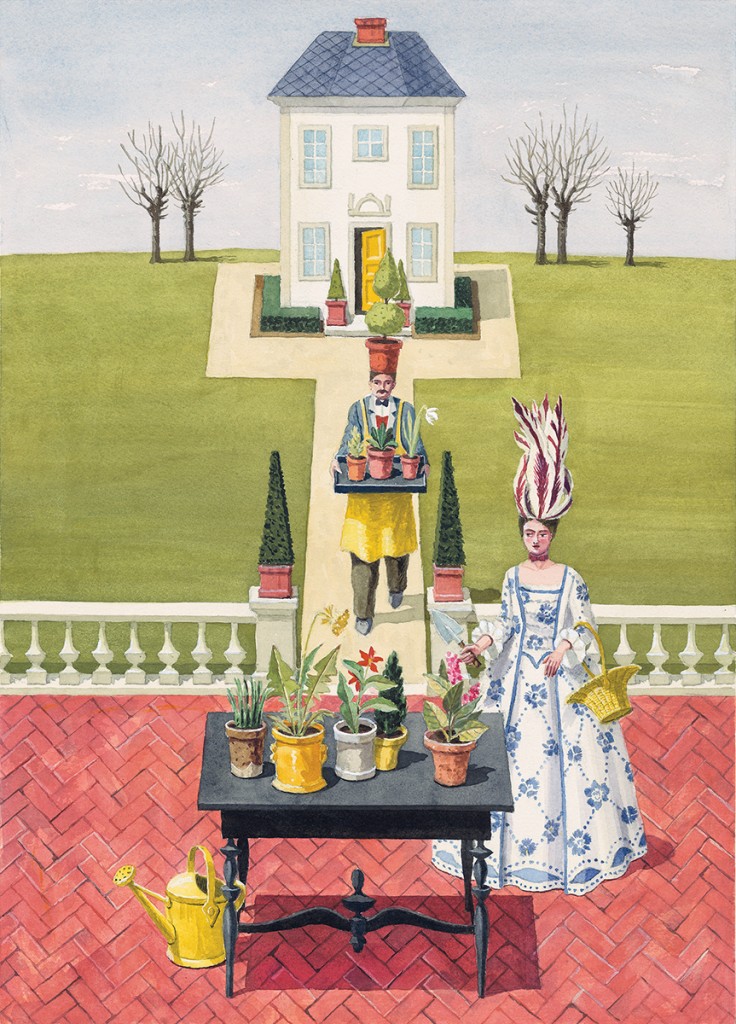 Garden_Work_CMYK-736x1024
In Howard’s “Flower & Shell People” collection, the women usually have a colorful bloom growing from the top of their heads while the men’s are often topped with potted topiaries, as in Garden Work. 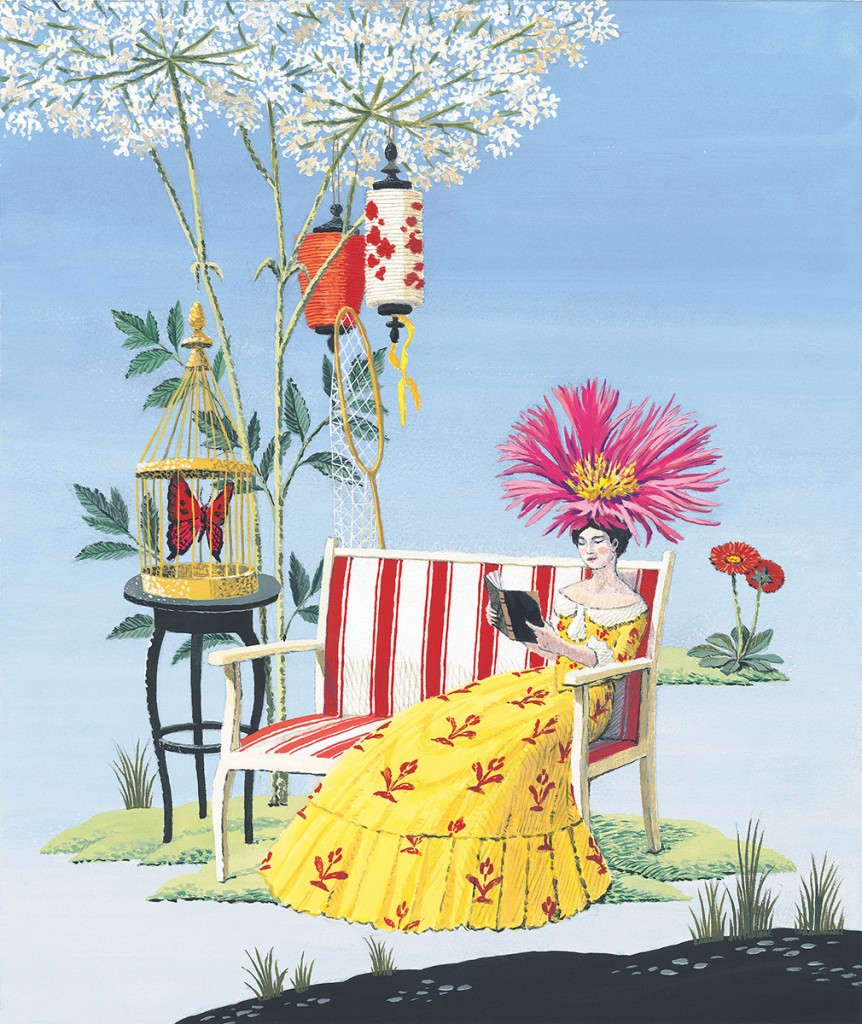 TheReader_CMYK-862x1024
The Reader pairs favorite botanical ideas with chinoiserie and a French-inspired settee. Furniture from the 18th and early 19th centuries appeals to Howard and often appears in his work. 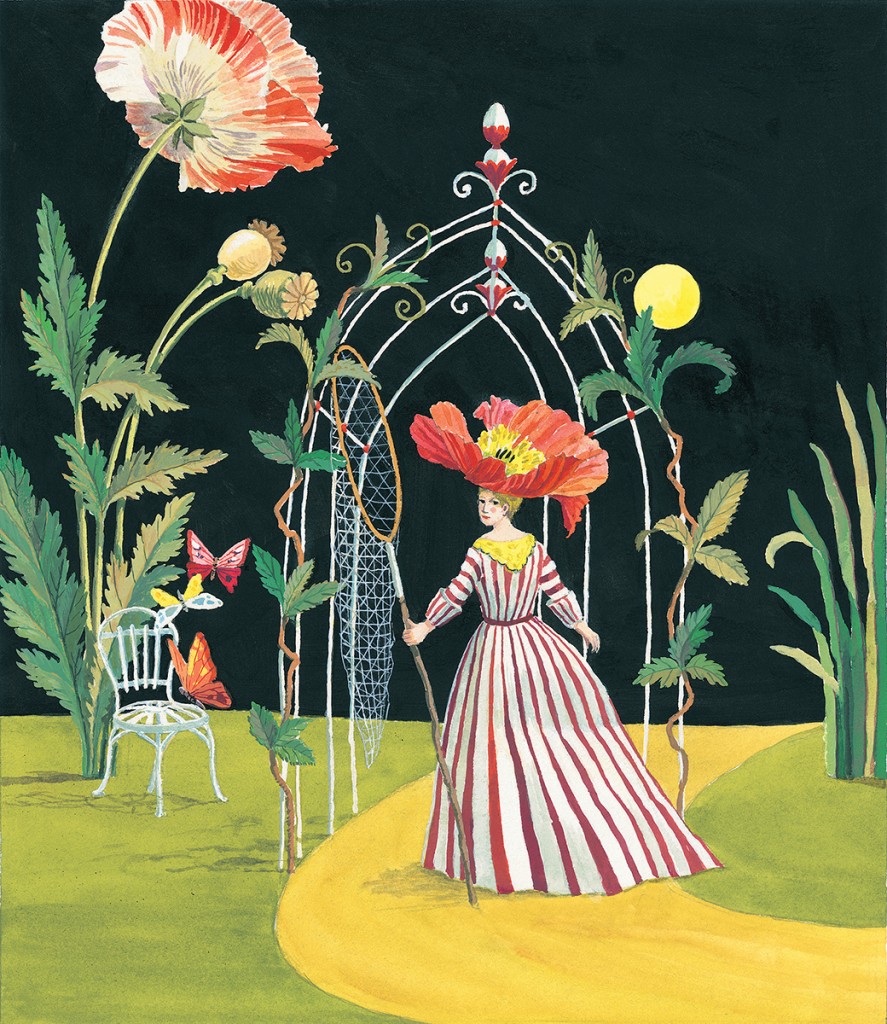 Night_Arbor_CMYK-887x1024
Howard creates fantasy worlds that draw the viewer in such as in Night Arbor, where flowers are the size of trees and butterflies are best caught in the darkest hours. 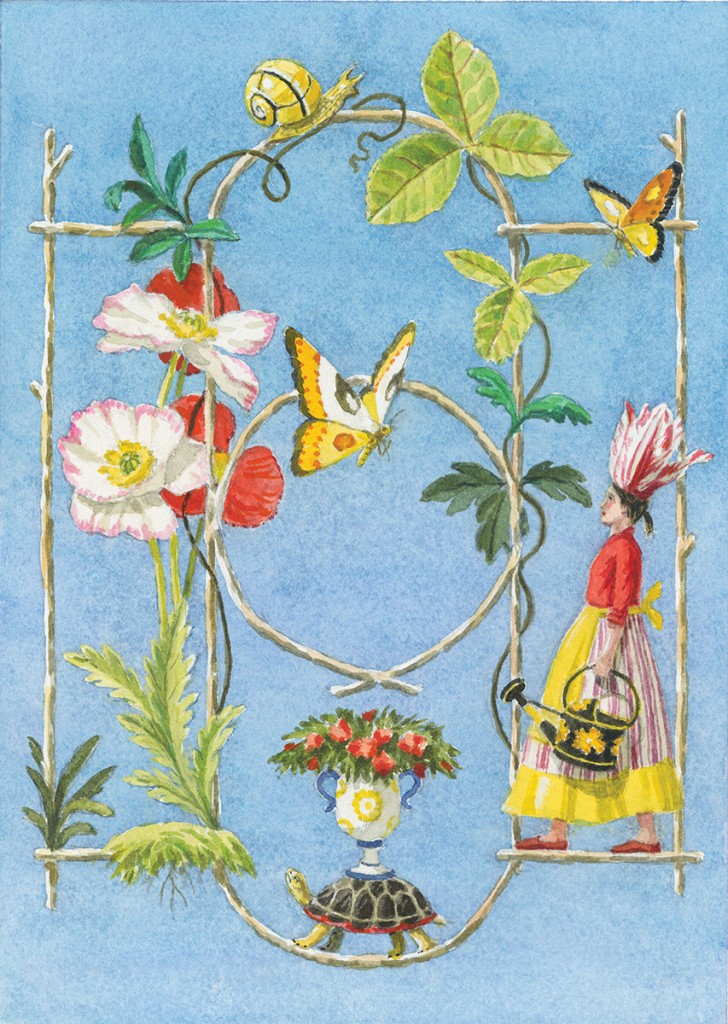 Rustic_Garden_Fantasy_CMYK-728x1024
“I frequently refer to real flowers or photos of them when I sketch, but I also sometimes make them up when I don’t have a convenient picture, and for me that adds to the interest of creating a painting,” says Howard. Rustic Garden Fantasy showcases the artist’s imagination.

ALL IMAGES COURTESY OF HARRISON HOWARD