At her château in the bucolic French countryside, the artist paints sumptuous, extravagant works inspired by floral arrangements plucked from the gardens just beyond her window

Talk art with Claire Basler, and the experience is just as dynamic as the murals that cover the walls of her 13th-century château, the paintings that animate her massive canvases.

She laughs a deep, throaty laugh with a glass of white wine in one hand, a linen scarf cinched nonchalantly yet chicly around her neck, and an unstudied elegance that’s utterly French. She breathes in the conversation. At one moment she discusses her most recent project, covering the surface walls of a small vaulted room in the South of France. Then she segues into her own château, and then moves quickly to flowers, her passion for gardening, and the natural world. It’s a whirlwind of information and inspiration that leaves you wanting more.

Basler’s road to her current residence—the Château de Beauvoir in the heart of France—sounds as if destiny had a hand. The path may have been long and winding, but each stop lead her to the rescue, the transformation, and the magic that is now her home.

Basler has always been an artist, but it wasn’t until she was 15 that she truly began studying the métier. “I did not have much formal training,” she says, “but what I did have was invaluable.” Her first teacher, a Madame Delarue, at Paris’ École Nationale des Beaux-Arts, helped her find her visual voice. “She was wonderful—a Parisian, funny, approachable, and excellent,” says Basler. “She taught us the basics we needed to know to make art. But she let artists pursue their own paths, and that’s what made us learn.”

And of course Basler had the Louvre close at hand. “I spent my days there,” she says, “all by myself, looking at Watteau, Vouet, Chardin (I love his self-portraits and his pastels), Ingres (but of course he’s later), and Caravaggio and Paolo Uccello. I studied the technique, how the soul of the painter comes through the paintbrush.”

Her education in art coincided with the advent of conceptual art in the 1960s and ’70s, which was taking the French art world by storm. That did not jibe with Basler’s interests: “To me, the 17th and 18th centuries in France are the most interesting,” she says. She left school to find an audience for her work.

At the beginning of Basler’s career, she was living in an apartment in Paris. But when she moved, “I had this miniscule garden and that became my passion,” she says. Then she found an old ironworks factory in Montreuil, just outside the city, and her pursuit of seemingly conflicting ideas—industrial, modern versus traditional, beautiful—came to fruition. At the former schoolhouse in Les Ormes, where she and her husband Pierre Imhof lived next, Basler was in the country, tending the garden and interpreting nature on walls and canvases in an inventive approach to adaptive reuse.

When they settled into the Château de Beauvoir, she and Imhof devoted themselves to restoring the centuries-old estate. For the 20-plus years previous, he was a builder, crafting sailboats. These days they work together to transform their part of the property, which still exists as a center for kaolin (necessary for the production of hard-paste porcelain).

“The château is huge. Our domicile is small,” she says. “But we are surrounded by 79 acres of forest and nature.” The house had been extensively remodeled by the previous owners. “We were not going to tear down walls and mess with the architecture,” says Basler. Instead the walls became her canvas, and the garden, her inspiration.

From the rolling hills and tall trees to the flowers that bloom just beyond the house, Basler finds a never-ending abundance of subjects. Her work blurs the lines between indoors and out, with grand, gestural paint strokes that convey a gust of wind or the shade from a passing cloud.

“Whether the sky is orange or blue, overcast or clear, no matter the season, far away or close-up, it’s all beautiful,” says Basler. She paints fresh blossoms just clipped from the garden and also those flowers that are at the end of their lives. She sees the beauty and character in both.

One example she offers is the image of a single blossom. “On its own, it’s simple, graphic, sophisticated. But in nature, among other flowers and plants, it becomes wild and part of the complex environment.”

When asked about “favorite” flowers, Basler hesitates. Instead of saying predictably that she loves them all, she admits to a fondness for poppies.

“It’s the force and fragility, the delicacy of the petals, and the profundity of the heart,” she says. But then she continues about irises—“they are beautiful but so ephemeral;” peonies—“extraordinary but so hard to paint;” and daisies—“always lovely.”

About lilies she is a little more thoughtful. “They symbolize death and purity,” she says. “But they are not at all virginal. They are strong and masculine, the prince of all the flowers.”

She creates bouquets from loose branches and stems, which come to timeless life on her canvases. In her house and in many estates around the world, Basler goes a step further and paints murals that reference the setting. But her work is neither impressionism nor realism. In the bedrooms at her own home, she uses gold and silver leaf and a subtle palette to color the murals. “The background is almost abstract. Instead you focus on the light,” she says. Ultimately that is what permeates the experience of Basler’s art as well as her life. It’s light, reimagined on surfaces, infusing her conversations, and always illuminating her environment. 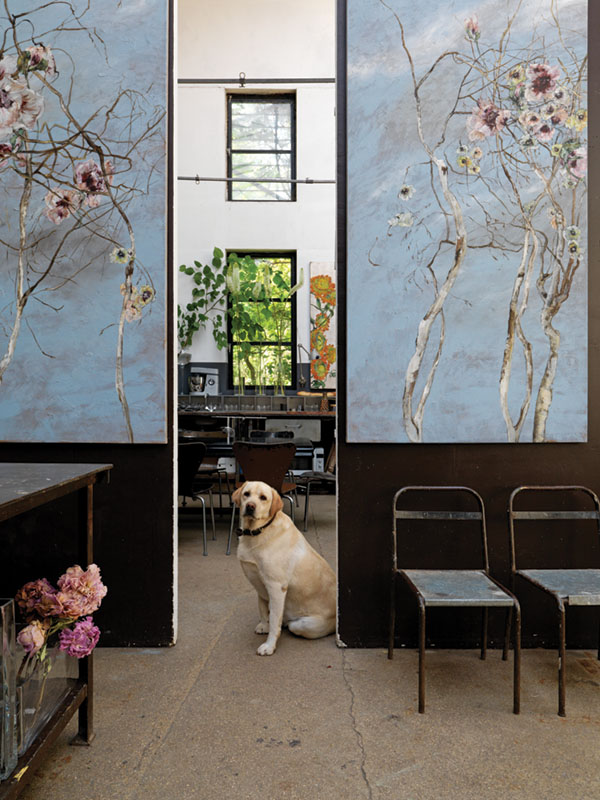 Basler's Labrador poses in a doorway of the former ironworks factory in Montreuil. Photo by Mads Mogensen 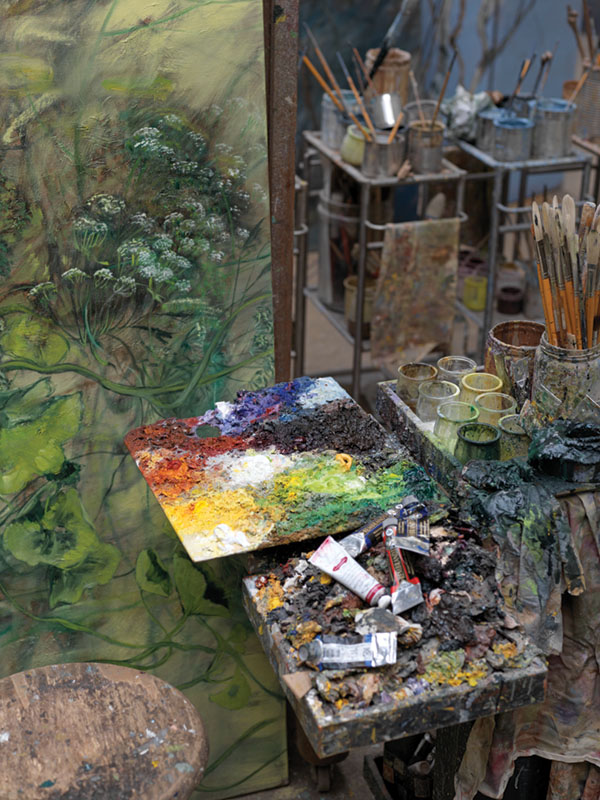 “I’m very organized about my palette,” says the artist. “The same colors are in the same places always, so I know instinctively where to find them without looking.” Photo by Mads Mogensen 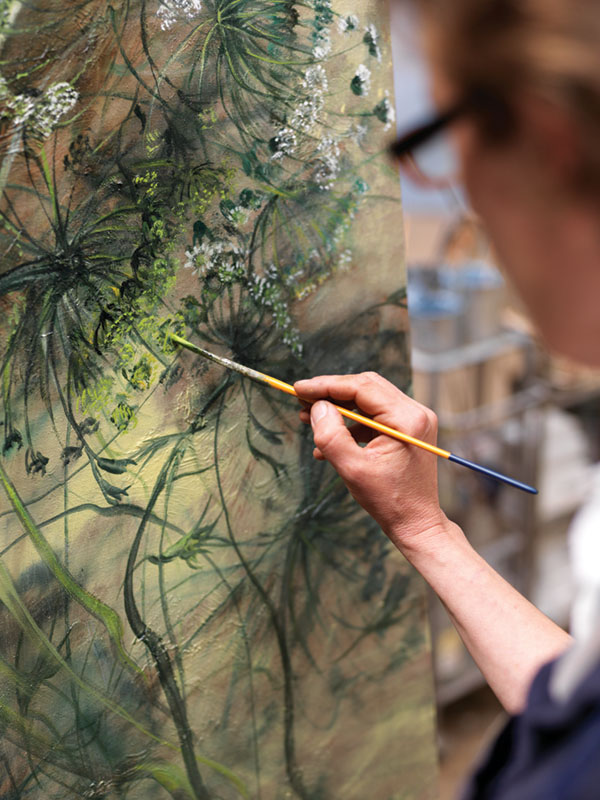 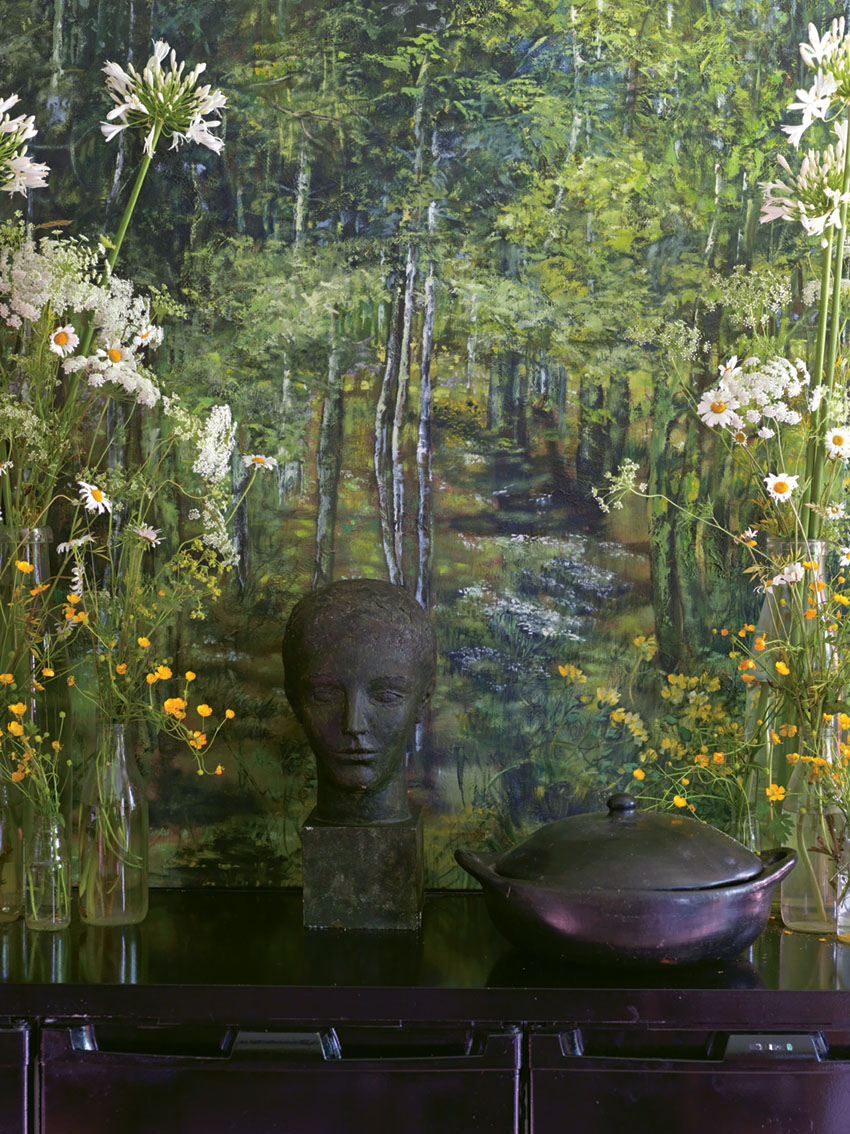 A few of Basler’s favorite things—vases of daisies and buttercups, a canvas from the schoolhouse at Les Ormes, a bust that was a treasured find, and a marmite or pot. Photo by Mads Mogensen 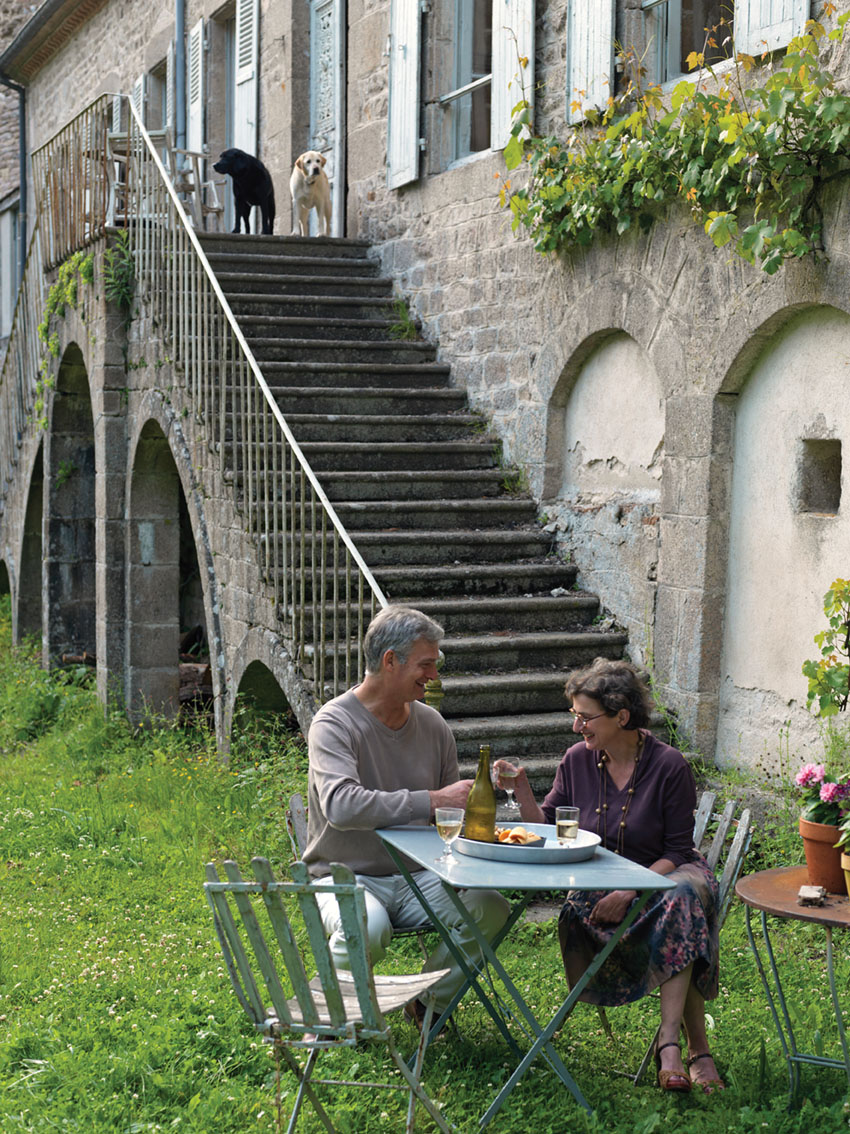 Get Flower magazine favorites and web exclusives delivered directly to your inbox.