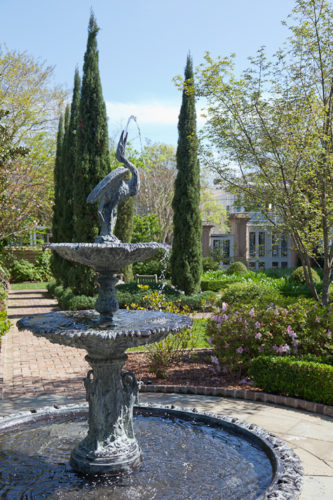 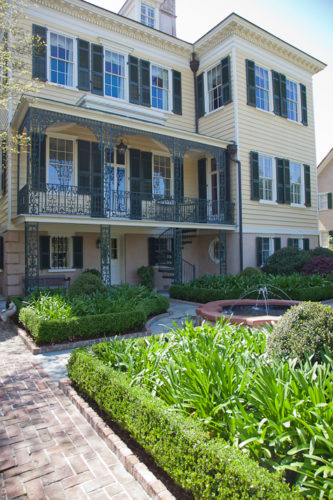 GARDEN BEFORE AND AFTER: When Mary Caroline and Steve Stewart bought the property in 2004, the gardens amounted to bits and pieces of shrubbery and grassy patches with perhaps 10 trees scattered about. Working with local landscape architect Sheila Wertimer, they did scrapings on the lot in an effort to determine where old beds and paths had been, to no avail. When the neighboring 1960s ranch house was for sale, they purchased that lot, razed the home, and expanded their property to 1.25 acres. Sheila devised the overall design, Steve was in charge of the hardscapes, infrastructure, and irrigation systems, and Mary Caroline chose and plotted the plants.

BY THE NUMBERS: Six fountains are on the property, and they laid 200,000 bricks for walkways.

INSPIRATION: “I wanted very formal gardens,” says Mary Caroline, “so I went to Louisa Pringle Cameron’s garden and read her books, took lots of garden tours, read Mrs. Whaley’s and James Cothran’s books, and I did research. I wanted parterres and garden rooms that flowed from one to the other, and for it to be more formal toward the house and then less so away from house.”

HOW THEY LIVE OUTSIDE: Spring and fall are the main times you’ll find the Stewarts in their garden. They gravitate to the pool and pool house, and have parties out there every warm-weather holiday.

“It’s constantly changing, and I’m always pulling out a plant here and there. I’ve learned you can’t just plant it and be done. There’s always something going on out there.” –MARY CAROLINE STEWART 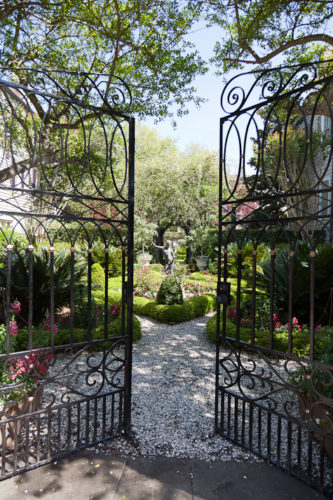 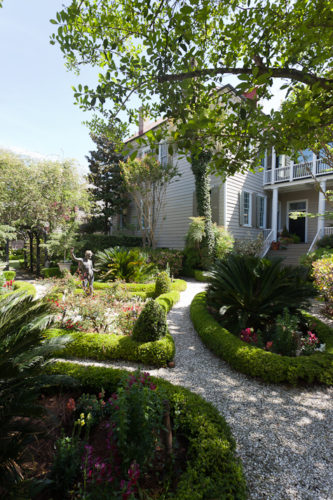 AT A GLANCE: When built, this four-bedroom, three-bath Charleston single house possessed a grand view of the Ashley River. However, when South Battery and Murray Boulevard were filled in for more development in the early 20th century, the house receded into a residential area.

GARDEN BEFORE AND AFTER: The garden and parterre beds with its 18th-century bricks appear in Loutrel Briggs’ 1951 book, Charleston Gardens. There were hardy flowering plants there, but when Melissa and Mark Maresca moved in 11 years ago, the garden had become overgrown. Mark edited out scores of plants, leaving in a mix of boxwoods, aspidistra, autumn ferns, and sago palms. Aiming for a lush, green space where texture and structures star, Mark worked with landscape architect Hugh Dargan to re-create much of the 18th-century garden by restoring the parterres and laid out an overall square with subdivided spaces that all open onto a central focal point—a sculpture from the late 1700s. Color comes with the annuals Mark adds in seasonally.

BY THE NUMBERS: There are four seating areas in the garden.

HOW THEY LIVE OUTSIDE: Mark gardens almost daily. They entertain in the garden, sit in the rockers, and enjoy it from the main house as the windows offer myriad views.

“One of the great things about Charleston gardens is the element of surprise they hold. That’s what we wanted to create with this one. There’s an 8.5-foot hedge cutting through the garden from one side to another right now, and there’s no telling what’s behind it. That keeps things interesting.” –MARK MARESCA 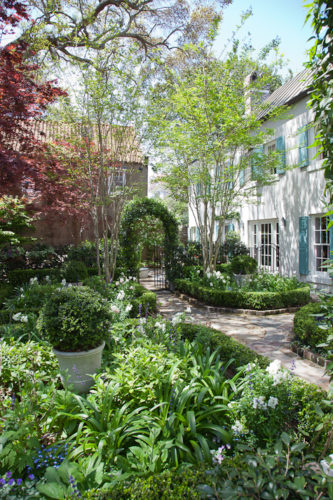 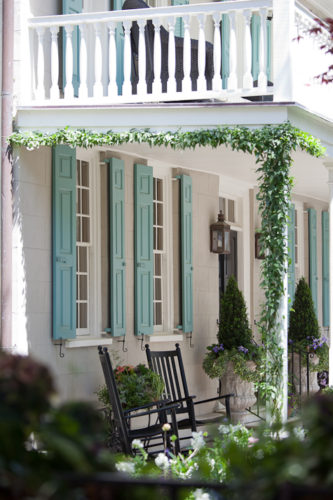 AT A GLANCE: Cited in Jonathan Poston’s The Buildings of Charleston as “one of the oldest surviving Charleston single houses,” it consists of a three-and-a-half story home and carriage house on a small urban lot on lower King Street.

GARDEN BEFORE AND AFTER: When Monica and Kenneth Seeger moved into the home in 2010, the garden, originally designed by Loutrel Briggs, needed some TLC. They hired Sheila Wertimer to perform the resuscitation, and Monica got what she had craved: a space that celebrated Briggs’s original layered layout and included statuary Monica had brought from California.

BY THE NUMBERS: Technically there are two gardens here, the pleasure garden and a kitchen garden with herbs.

HOW THEY LIVE OUTSIDE: Monica says the garden is “large enough for entertaining and small enough to manage and enjoy.” It’s part of the garden tour circuit every spring, and she often invites curious passersby to come closer for a better look. Given it’s visible from most rooms and, of course, the piazzas, the Seegers take in the view all day long, all year long.

“The size of the garden appealed to me from the onset; it’s large enough for entertaining and small enough to manage and enjoy.” –MONICA SEEGER 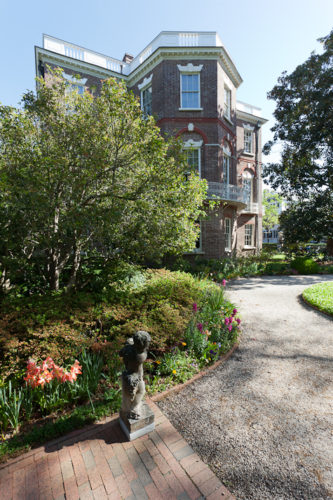 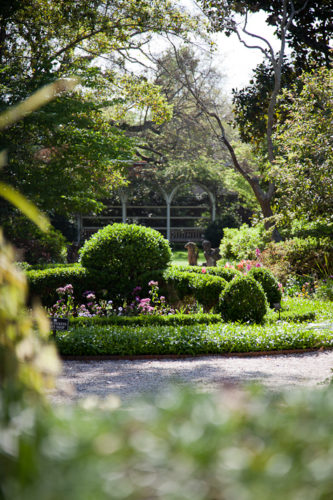 AT A GLANCE: The neoclassical, three-story, nine-room brick mansion on Meeting Street operates as a house museum managed by the Historic Charleston Foundation. Purchased by the group in 1955 it served as their headquarters for 37 years until they outgrew the space.

GARDEN BEFORE AND AFTER: Curators with the Historic Charleston Foundation say the 1808 gardens included geometric parterres, an orchard, and a work yard with vegetable and herb gardens. Atypical for Charleston, where most front doors and/or piazza doors open onto a city sidewalk, the main house sits some 30 feet into the lot, and one can only enter after passing through the garden. It’s also unique in that rather than sporting long porches that look out and open onto the yard, the house is hung with small wrought iron balconies here and there.

Today, the garden’s main features include a circular planted bed with boxwood hedges, brick borders, and a surrounding path; a lawn with an arbor and shaded benches; antique brick pathways; and a mix of crepe myrtles and live oak trees. However, Museum Manager Lauren Northup aims to restore the gardens to more a historically accurate plan than the current style, award-winning as it may be, which was established in the 1980s.

“In 1818, William Faux wrote in his travel journal that he ‘called on the venerable Nathaniel Russell, Esq., residing in a splendid mansion, surrounded by a wilderness of flowers, and bowers of myrtles, oranges, and lemons, smothered with fruit and flowers….’ ” –BRANDY CULP, HISTORIC CHARLESTON FOUNDATION CURATOR

For more information on the Historic Charleston Foundation’s Festival of Houses and Gardens, visit www.historiccharleston.org.