He spotted her across the room at a New York fundraiser. Her wingman (and future maid of honor) noticed and encouraged him to come meet her. She was my niece, Mary Carleton Rafield, and he was Gael Gremaud. He introduced himself by saying, “Hello, I’m Gael from Paris,” but as it was a loud venue, she heard, “Hello, I’m Bill from Paris.” That evening, and also in jest at the rehearsal dinner three years later, he was “Bill from Paris.”

Carleton was teed up to respond to the tall, handsome Frenchman, having been raised traveling and studying abroad by parents with a keen appreciation for culture and beauty, a gift that she inherited in abundance. When the two decided to marry, there were some logistical and stylistic musts for the wedding. First: They would marry at Carleton’s family home, situated just off the 14th green at Birmingham Country Club, where she and her siblings had grown up racing across the fairways to swim, play golf and tennis, and eat cheeseburgers and bomb pops. Second: There would be a seated dinner. Third: The height of Southern hospitality would be on display, as guests would be flying in from Paris, California, New York, and parts in between. Luckily, while attending the College of Charleston, Carleton had worked as an intern for wedding and event designer Tara Guérard of Soirée, so she knew who to call.

The wedding day dawned sunny, cool, and breezy and remained so, ensured by the burying of the bottle of bourbon (an old Southern tradition) and the chorus of prayers. Bridesmaids gathered with Carleton at the house for lunch, hair and makeup, and girl talk, while the groom and his men (or as they’re called in France, témoins, or witnesses) sampled legendary Birmingham barbecue and explored downtown on green Zyp bikes.

At five in the afternoon, guests were seated on the lawn, serenaded by a string quartet and almost Disney-like birdsong. We were tucked in at the base of the green, facing the cedar-shake house and an arbor of garden roses. With the stage set, the wedding party processed from the left down the rose-petal-strewn aisle. We continued to gaze left in gleeful anticipation, but no bride followed. Soon, a flutter of movement ensued, and all heads turned to the right, where Carleton and her father swept along the lawn, under the boughs of an ornamental elm, backlit by the sun, with the bride’s veil wafting in the breeze.

More from the Wedding Party 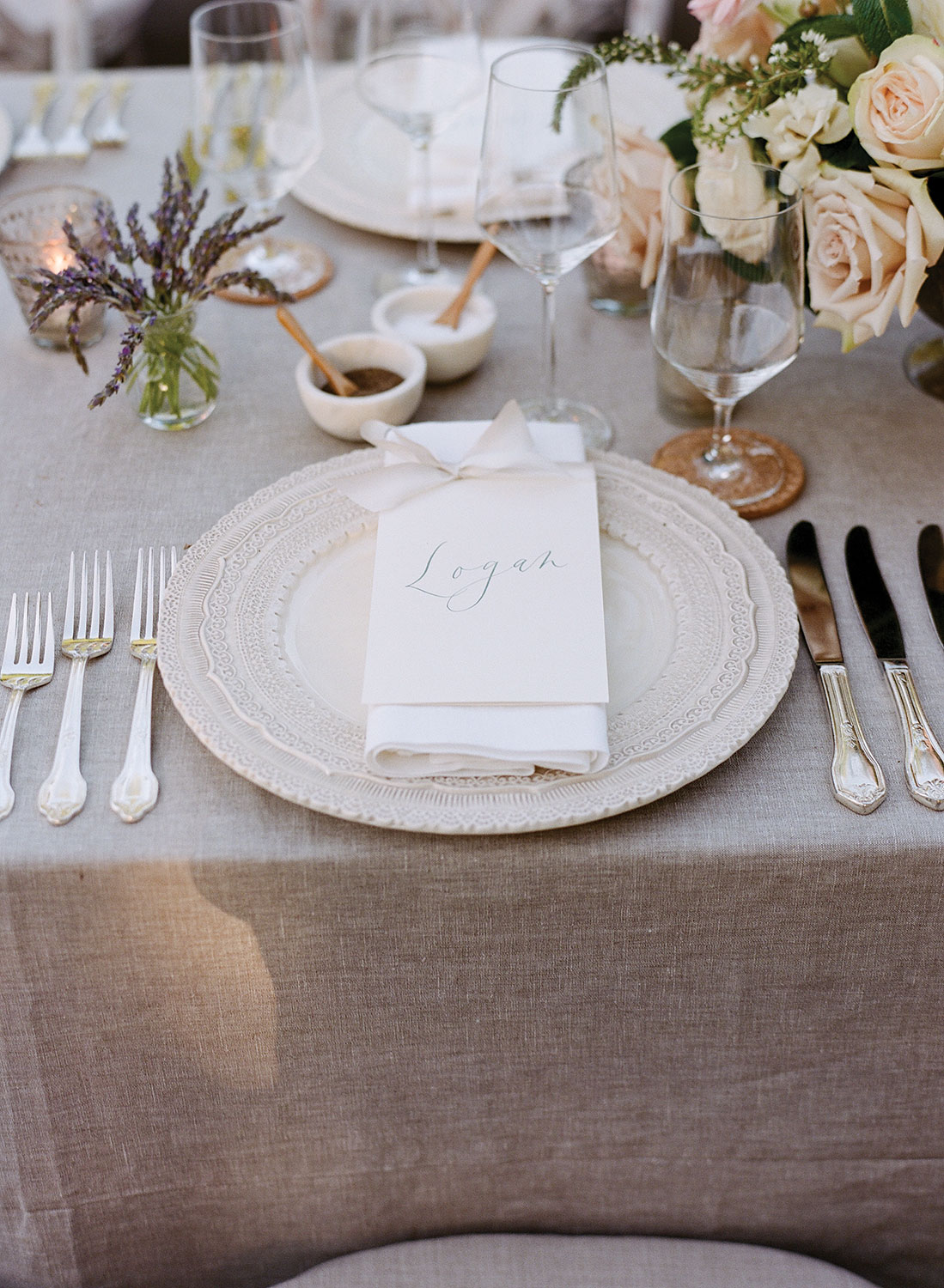 In a subtle reference to the groom’s French origins, bud vases of lavender appeared intermittently on the dining tables. 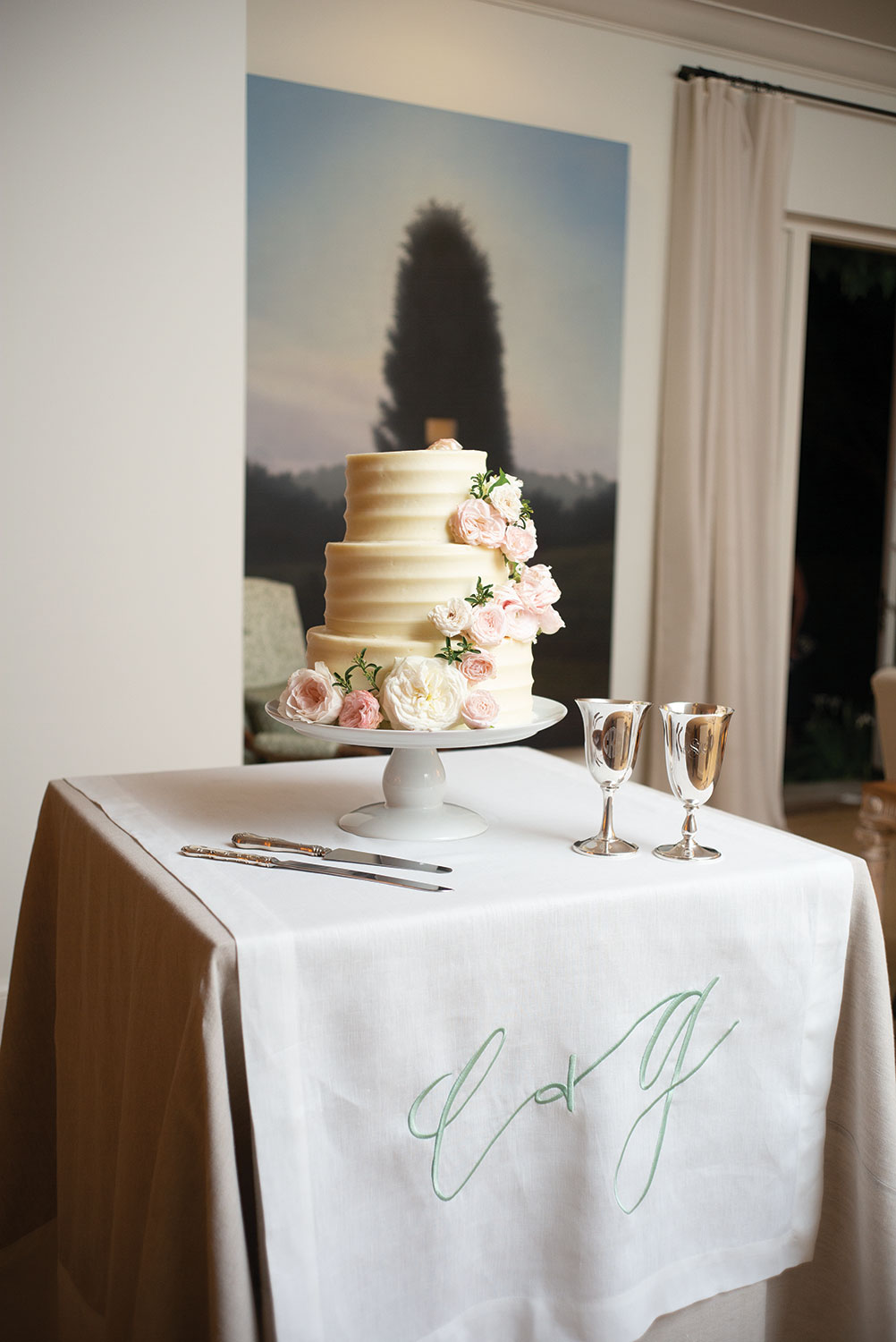 Carleton and Gael drank their first toast from heirloom silver goblets from her father’s side of the family. 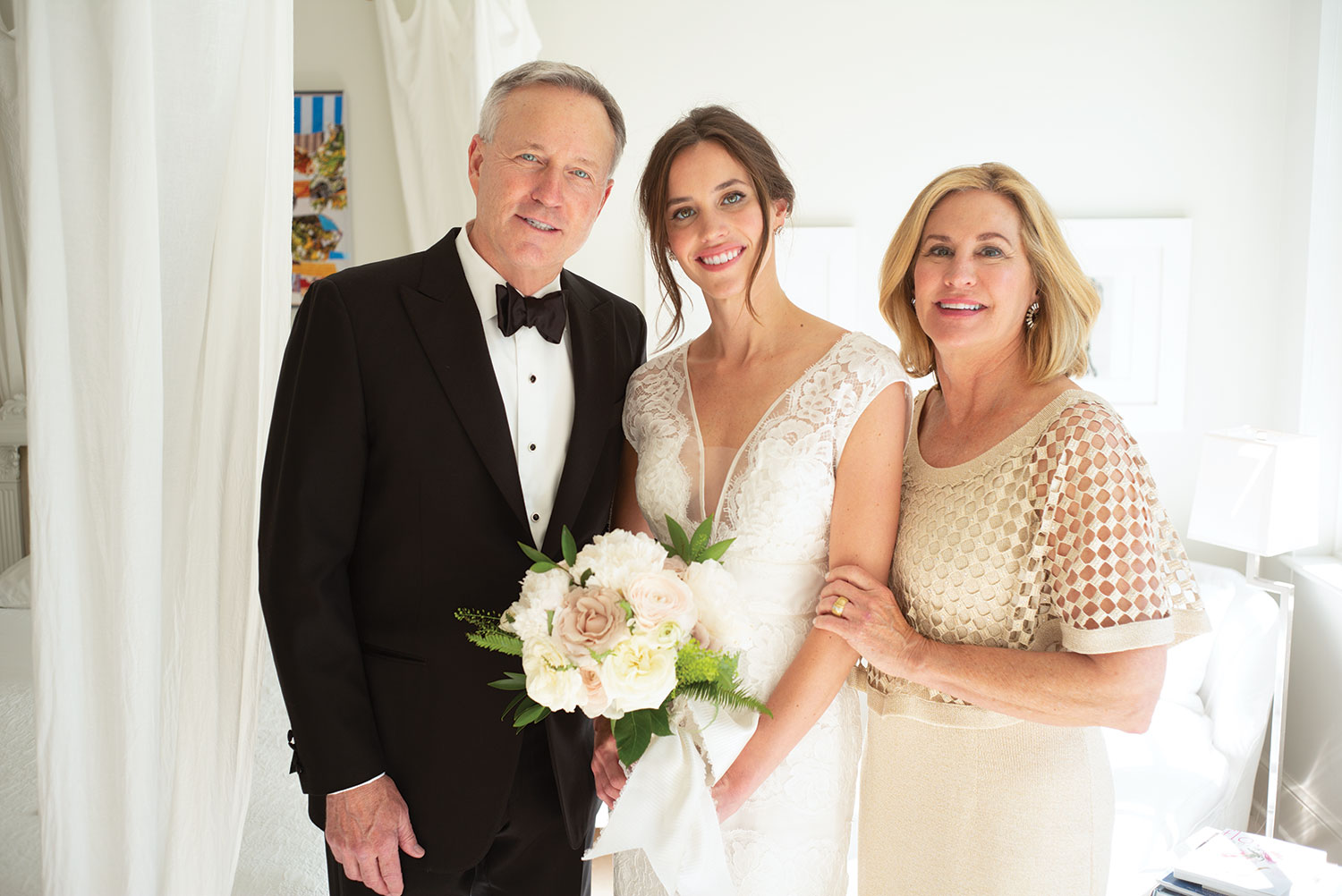 Carleton with her parents, Conrad and Peggy 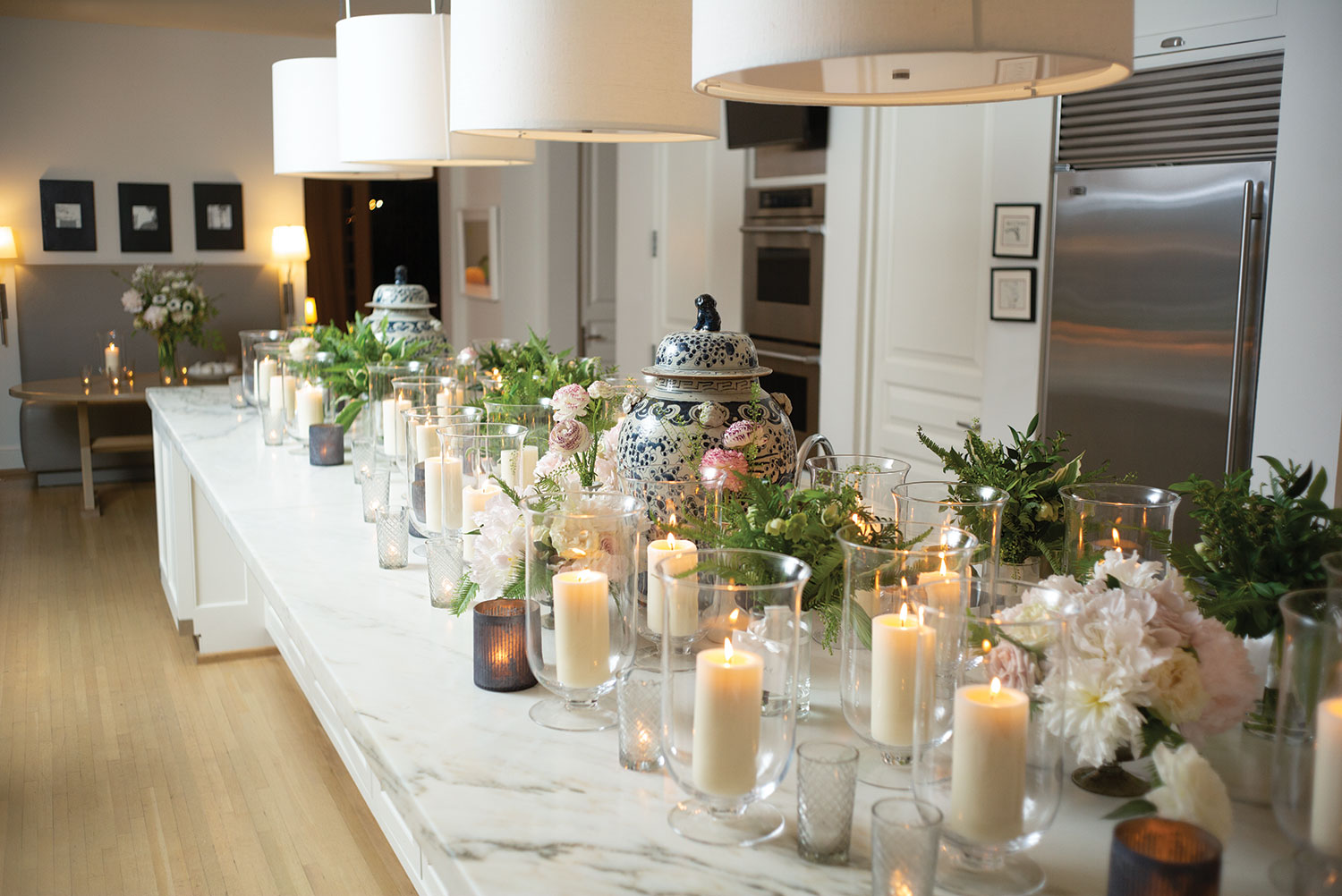 Tara Guérard of Soirée turned the Alabama marble kitchen island into a runway of hurricane candles, blue-and-white porcelain, and flowers. 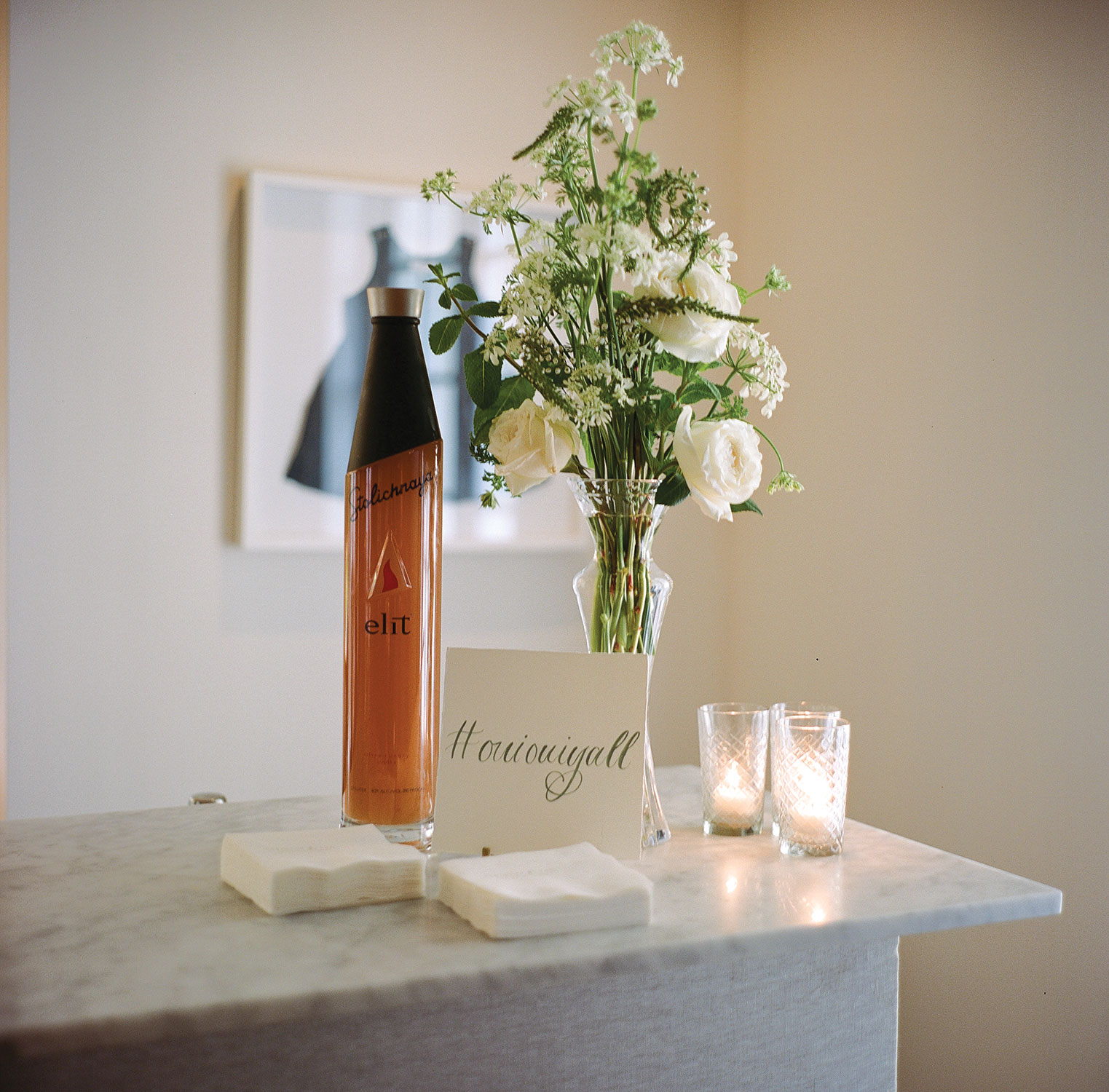 Guests used the hashtag #ouiouiyall for their social posts. 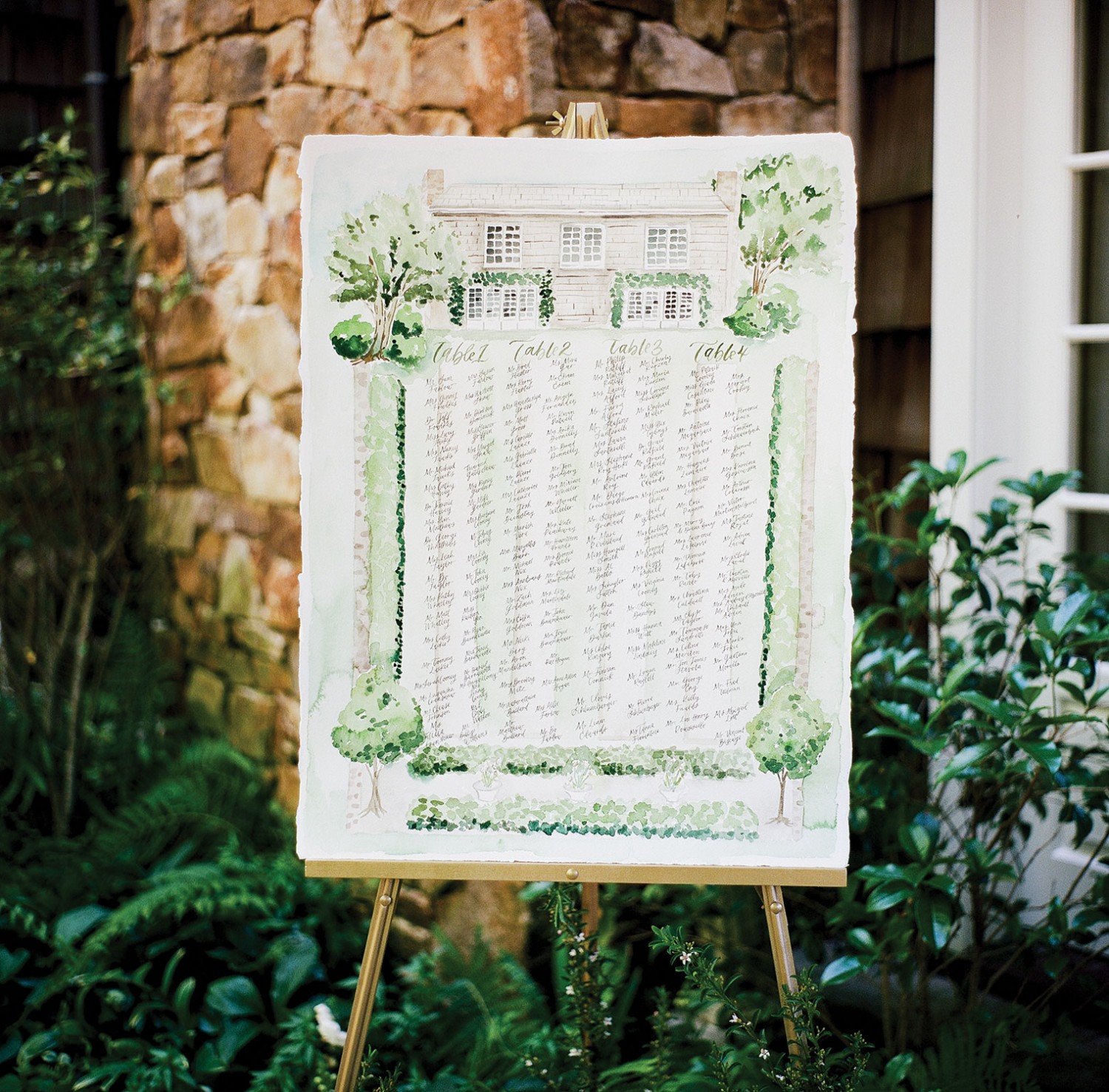 Already a treasured keepsake, this whimsical seating chart was painted on oilcloth by a friend of the family. 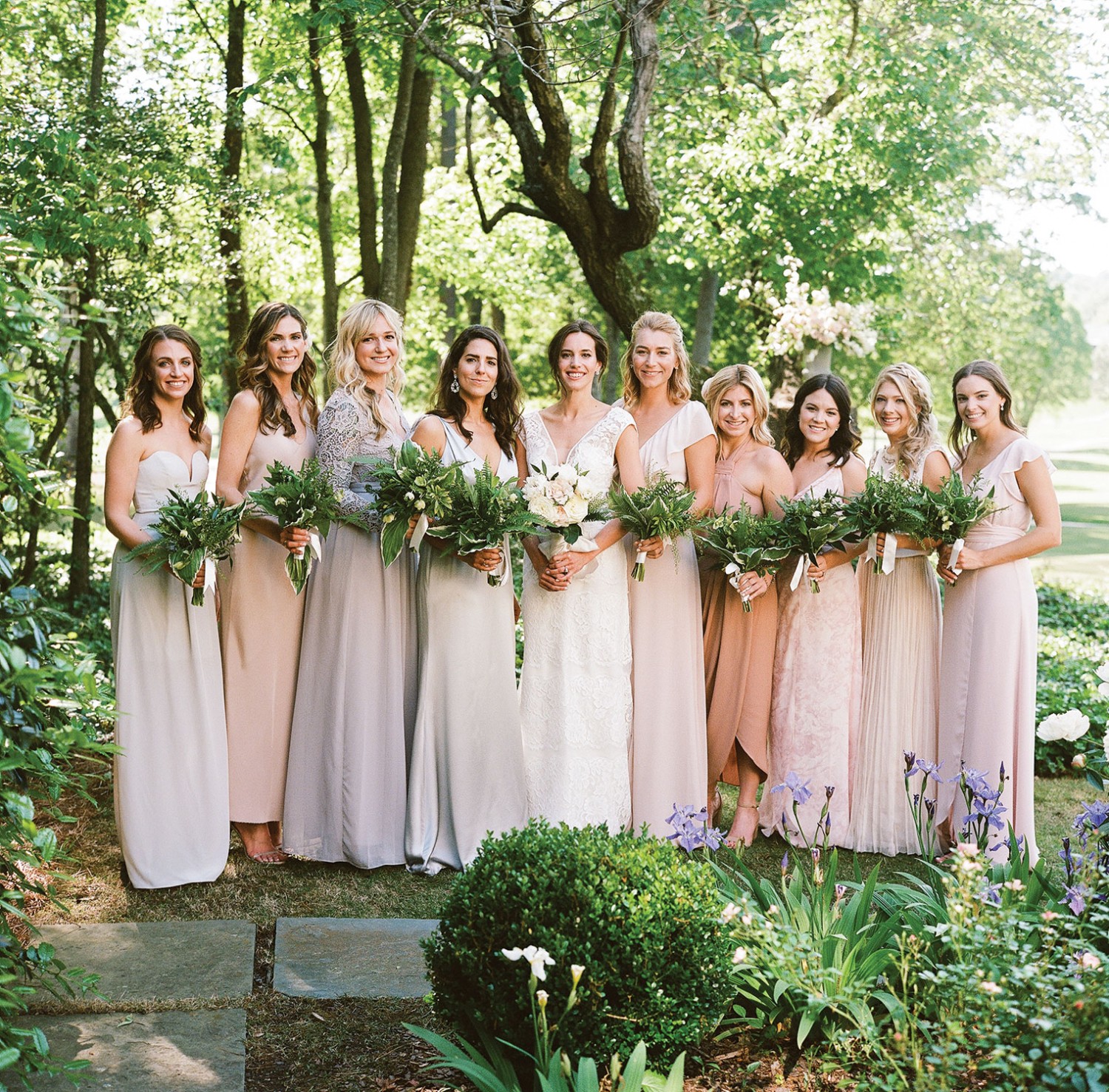 The bride, surrounded by her maids 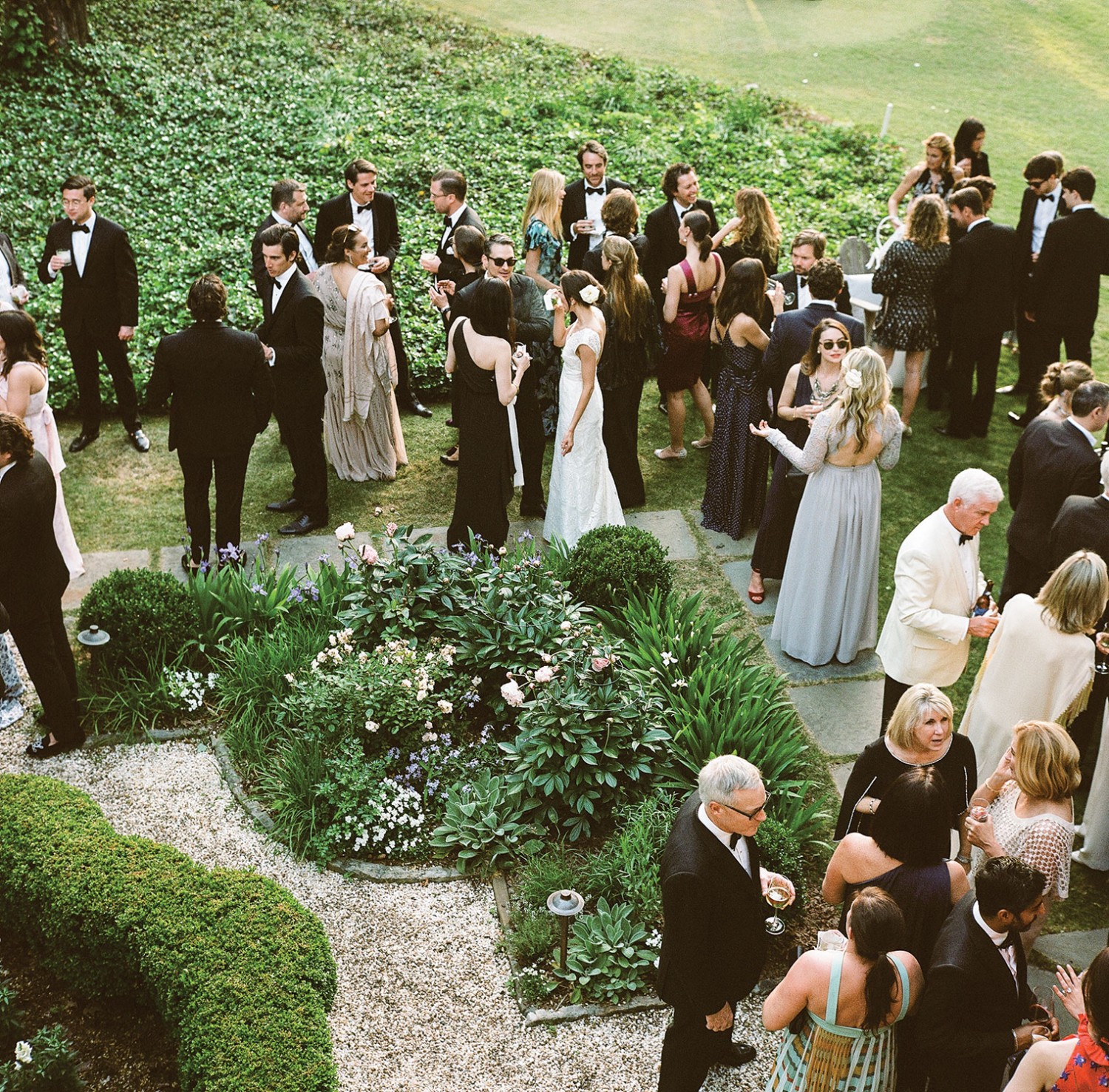 After the ceremony, guests gathered for refreshments in the parterre garden. 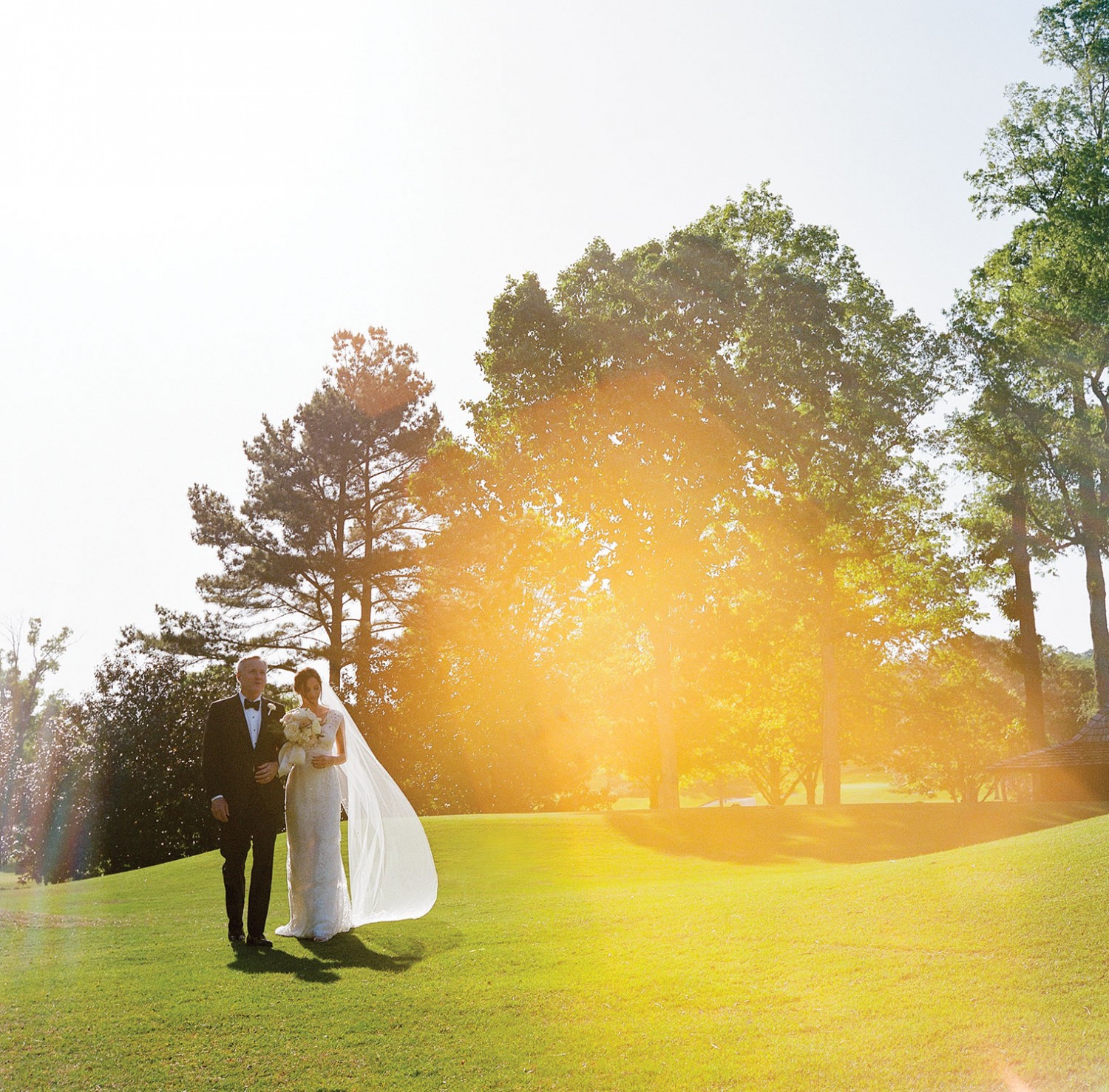 Carleton and her father, Conrad Rafield

The couple had asked my husband, an Episcopal priest known to them as Uncle Gates, to perform the ceremony, and members of the wedding party to take turns reading verses and prayers. Hearing 1 Corinthians 13, the love chapter, read with a French accent was one of my favorite moments of the day. After the two were pronounced husband and wife, we followed them to the parterre garden for champagne and hors d’oeuvres and then into the front garden to dine. Strains of jazz and standards, played on an heirloom baby grand piano, floated through the open French doors, and as we finished up, a trio of horns led us indoors for the cake cutting.

But the pièce de résistance came when we were ushered back to the pool area, which had been transformed into a tented dance floor, for a musical surprise. When the first dances were complete, the groom, the fathers of the bride and groom, and one of Carleton’s brothers took to the stage and broke into a rousing version of “Sweet Home Alabama.” You haven’t lived until you’ve heard 50 or so French folks singing the chorus of the Lynyrd Skynyrd classic and shouting “Roll Tide Roll.”

Like in Cinderella, the revelry continued until the clock struck midnight. We cheered as Carleton and Gael ran the gauntlet of friends and family tossing dried lavender, hopped onto a waiting golf cart, and rode across the same landscape that the bride had traversed so many times—this time to her new life with her prince charming, or should I say, charmant.

By Margot Shaw | Photography by A Bryan Photo