Instead of boarding a plane to some exotic honeymoon destination after saying “I do,” Ashley Fox enjoyed a happy-hour cocktail with her husband, Mike Mensing, in downtown Minneapolis, Minnesota. She and the groom had tied the knot earlier that day to the tune of clinking mimosa glasses on the patio of a renovated Georgian mansion. “That’s the real benefit of having a brunch wedding,” says Fox, who is a floral designer by trade. It really strikes the perfect balance of being able to enjoy all aspects of the day, and yet you don’t get worn out.”

The couple’s romance is a modern one. After meeting online, they had their first face-to-face rendezvous over coffee and quiche at a local restaurant in Minneapolis. First impressions were important in more ways than one that day: The brunch became Fox’s inspiration for their wedding day. They exchanged vows at 300 Clifton, a historic home nestled in a mature Minneapolis neighborhood. After the 10:30 a.m. nuptials, guests enjoyed a menu of eggs Benedict, French toast, apple-smoked bacon, and fresh fruit catered by Fox’s favorite hometown restaurant, Coalition. The sweet side of the meal—which consisted of Danish and croissants—was provided by Patisserie Margo, a beloved local French café. “If I had to paint the picture of my perfect brunch, it was my wedding day,” Fox says. She even gave a nod to the couple’s first date by including quiche on the menu.

With such a dramatic historic backdrop, Fox chose to adorn the table with flowers and flatware that didn’t compete with the house’s turn-of-the-20th-century décor. “I didn’t want to distract from the space at all, since it was so beautiful,” says Fox. 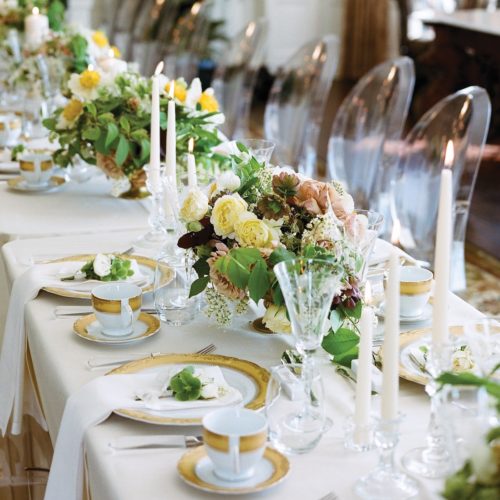 Lit candles led the way for a parade of lush blooms, such as ‘Koko Loco’ roses, lily of the valley, lilac, foxglove, and ‘Bridal Veil’ spirea, that danced down the dining table in well-appointed arrangements. Her bouquet overflowed with foraged floral elements accompanied by apple blossoms brought in from her father’s home. 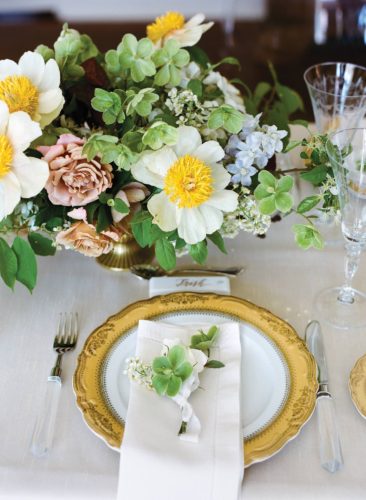 Those personal touches, including place cards created by Fox’s uncle, made the day feel more like an intimate gathering, she says. “We wanted it to feel like you were in somebody’s home, which we absolutely were. We just wanted a relaxed atmosphere—and who doesn’t love brunch?”