Every bride wants to feel like a queen on her wedding day. But when real royalty or high society gets married, the proceedings take on an elevated grandeur. With the addition of modern media scrutiny, the notable weddings of the 20th and 21st centuries have set the bar for couples ever since 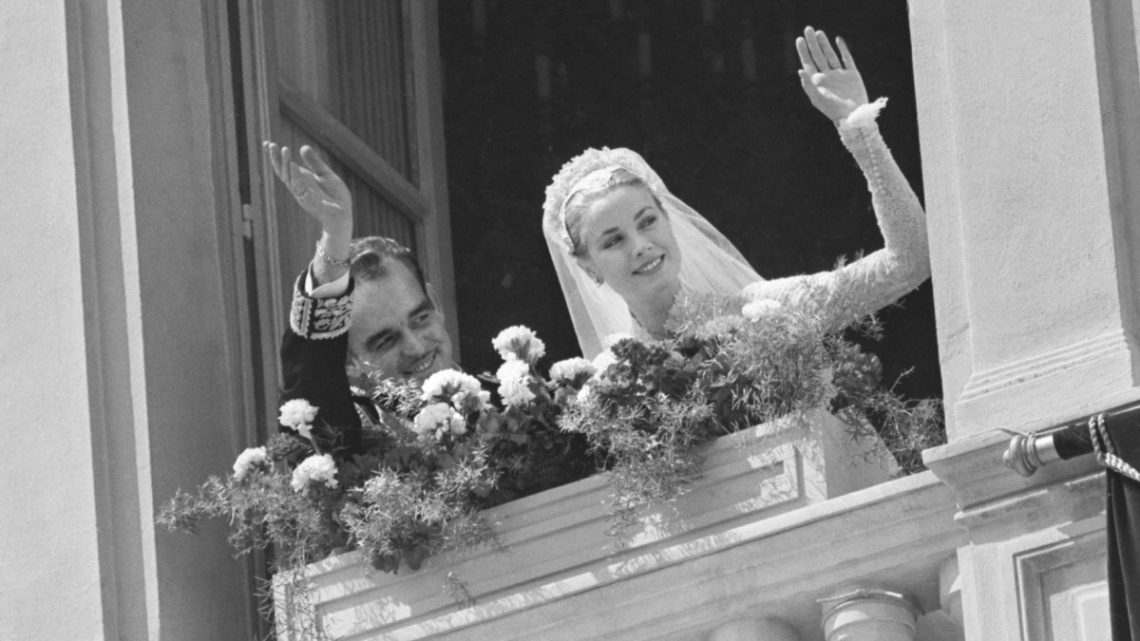 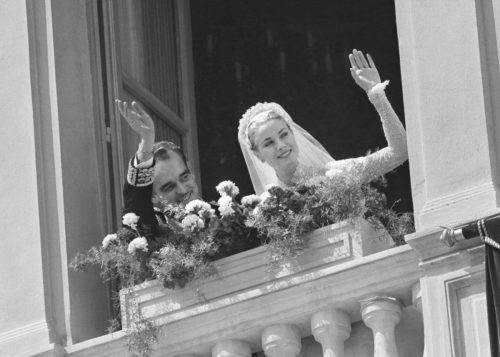 The nuptials of American movie star Grace Kelly to Prince Rainier of Monaco epitomized many a girl’s fairy tale of finding her prince, and began a new chapter of media coverage of high-society and royal weddings. Photo © Bettmann/CORBIS

The wedding of Grace Kelly to Prince Rainier in 1956 ignited a global media frenzy and continues to influence modern weddings, including that of Kate Middleton to Prince William. Rainier and the movie star met only briefly when Grace took a break from the Cannes Film Festival to visit Monaco. She returned to the United States and the pair began corresponding by letter. They shared an outlook and sensibility, and, over a six-month courtship conducted entirely by airmail, fell in love.

Under the pretense of a medical checkup, Rainier traveled to the U.S. to propose. He spent Christmas at the Kelly family’s table in Philadelphia, leaving little doubt as to his intentions, and proposed to Grace in Manhattan two days later. At the time, she was filming High Society, and the Cartier 10-plus-carat diamond ring that Rainier gave her was featured in its own close-up. As the news of the engagement was announced to the press, Grace’s mother was heard exclaiming, “My daughter is going to marry the Prince of Morocco!” Grace’s sisters had to point out Monaco on a map to straighten her out. 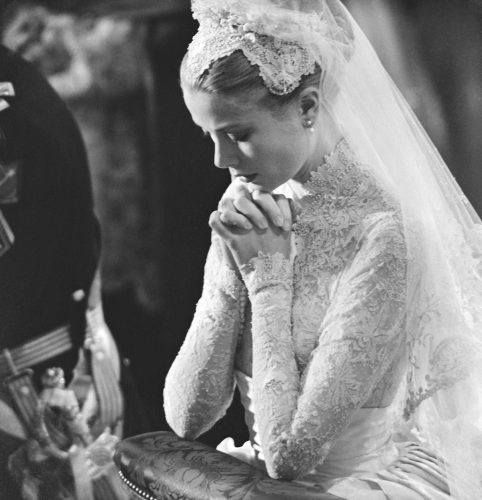 Grace Kelly’s dress of taffeta and lace embroidered with seed pearls became one of the most copied wedding dresses ever. Photo © Bettmann/CORBIS

Whatever country Grace would be living in, her mother wanted her to be married in Philadelphia, in the American tradition of marrying in the bride’s hometown. But the couple explained that since Grace would be becoming Princess of Monaco, their wedding would be a state ceremony. The phrase “Wedding of the Century” became a refrain by the time the bride arrived in Monaco for the event, followed by more than 1,600 reporters and photographers. Six hundred guests crowded the Saint Nicholas Cathedral, and 1,500 were invited to the palace reception. Every jewel thief on the planet also made sure to be in Monaco.

It was not the kind of wedding Grace nor Rainier would have preferred. “I would have been happy to be married in our own ordinary, casual clothes in a secluded chapel somewhere. After all, I would have married him even if he was some small-town mayor,” said Grace. Rainier agreed. “If it had been up to me, the wedding would have been held in the palace chapel, which seats 21 people,” he said. But they felt obligated by the duties of the principality, and the “Wedding of the Century” proceeded to enrapture the world.

Grace’s dress of taffeta and lace embroidered with seed pearls became one of the most copied wedding dresses ever. Helen Rose, a costume designer for MGM, designed the dress, and it was constructed under close security because the press were in a lather to get a preview, much as they would be later over Diana’s, Kate’s, and more recently, Meghan Markle’s gowns. Her bouquet of lilies-of-the-valley symbolized purity and a return to happiness. Her bridesmaids carried tea roses, and the flower girls held posies of daisies. A luncheon at the palace followed the service, with a seven-tiered wedding cake as a focal point. 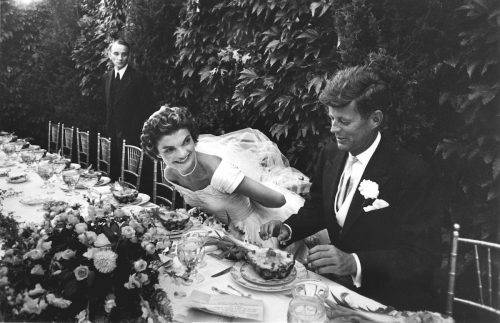 Sen. John Kennedy & his bride Jacqueline in their wedding attire, as they sit down together at table to begin eating a pineapple salad at formally set table outdoors at their wedding reception. (Photo by Lisa Larsen/The LIFE Picture Collection/Getty Images)

A few years earlier, the wedding of Jacqueline Bouvier to John F. Kennedy in 1953 heralded the new age of celebrity weddings. The public was enchanted by the handsome couple, as close to American royalty as a bride and groom had ever come. There had been flashy aristocratic weddings before, such as Queen Victoria’s to Prince Albert, but the advent of television brought the private rite of a patrician nuptial into every American’s home. One guest told Life magazine that the wedding was “like a coronation.” 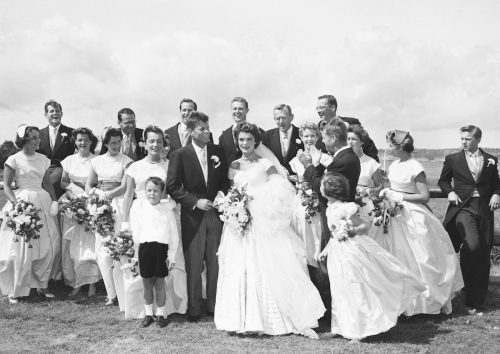 The outdoor reception bubbled with energy and wit of the Kennedy and Auchincloss families. The couple went through two different cake-cutting ceremonies for the multitude of photographers. She drew the line at clinking flutes with Jack for the cameras, claiming it was “too corny.”

Guests feasted on pineapple salads and creamed chicken, standard wedding fare for the pre-foodie era. Jackie’s wedding flowers were, of course, spectacular, from her bouquet of pink and white orchids, to the diadem of orange blossoms that cascaded from her grandmother’s rose point lace veil. The reception tables were adorned with low arrangements of miniature roses and garlands of greenery, suitably tasteful for an up-and-coming politician and debutante. Seven years later they would move into the White House and usher in the age of Camelot. 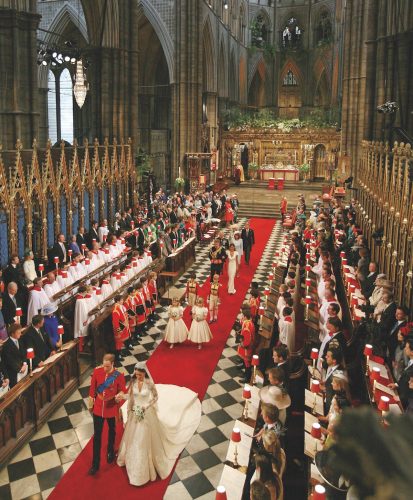 All eyes in Westminster Abbey—and indeed, the world—were on the future King of England (or much more likely, his bride), as William and Kate married in royal style. Photo © Zeng Yi/Xinhua Press/CORBIS

When Kate Middleton and Prince William were married in 2011, many aspects of the event were directly inspired by royal predecessors, filtered through the couple’s thoroughly modern style. Sarah Burton of Alexander McQueen created a classic, medieval-meets-modern gown. Its similarities to Grace’s dress were notable, with its lace bodice adapted to a V-neck, and taffeta train that sister Pippa ably negotiated entering Westminster Abbey. Kate, too, carried a lily-of-the-valley bouquet, designed by Shane Connolly, although with the addition of sweet William in honor of the groom. Connolly also decorated the abbey. In a nod to environmental awareness, he filled the sanctuary with potted lilies-of-the-valley and lined the aisle with an allée of potted trees that had been dug up from the grounds of Windsor Castle and returned there after the ceremony. 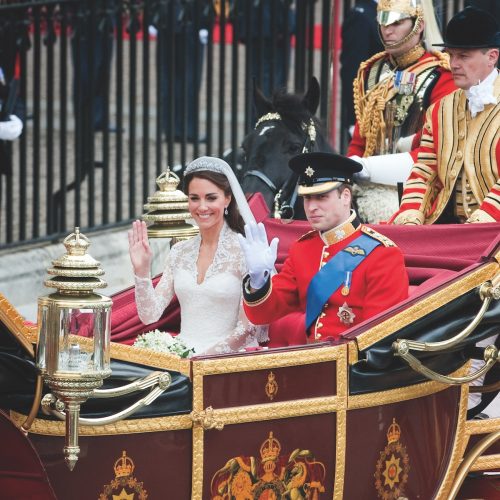 Although the couple traveled from the abbey to the reception at Buckingham Palace by carriage, at the conclusion, the prince swept his bride away in his father’s sporty 1969 Aston Martin Volante. Decades earlier, Grace and Rainier had done much the same. Every generation develops its own bridal traditions and trends, but Kate and William proved you can’t go wrong borrowing from the best nuptials of the past.