Editor’s note: This article originally appeared in the Summer 2011 issue of Flower magazine. The illustrious London designer and style maker William Yeoward, who influenced Flower in countless ways through the years, passed away on June 18, 2019.

Comparing British designer William Yeoward’s typical pace through life to that of a whirling dervish is only the slightest exaggeration. He returned only a few days ago from a sojourn to Australia and Asia to promote his furniture and fabric lines. Just this morning he created three new carpet designs, and he’ll be spending this afternoon—between magazine interviews—preparing for tomorrow’s photo shoot of his crystal introductions. It’s a dizzying schedule, to be sure, but he manages it all with an almost military-like precision mixed with a hefty dash of his signature wit.

The London-based designer, who oversees the ever-growing British empire of home furnishings and tabletop collections that bears his name, also describes his idea of exercise as “a good, brisk sit” and most definitely takes time to stop and smell the roses, often the ones rambling about his glorious country garden in the Cotswolds. “How could I not? I simply don’t understand the person who doesn’t notice and want to be around flowers,” he says.

Although he remembers his childhood as growing up in a family that was more interested in water sports than wallpaper, “I would sneak paint from my father’s workshop and paint the door of my bedroom time and time again. I was constantly rearranging the furniture and tinkering with things,” he says. “My grandmother was very good with her house, and I spent a lot of time with her. It lit the paper that would become a fire.”

That fire took Yeoward to London in his late teens, a time he recalls as akin to setting a kid loose in a candy store. “I was drawn to all the wonderful colors, forms, tastes, and sensations of the city,” he says. While wandering down the boutique-lined King’s Road, a spotting of designer Tricia Guild working in the window of her Designers Guild shop prompted Yeoward to walk in and ask for a job. He stayed for eight years, learning and working with Guild, who was shaking the dust right out of English style and turning heads with her boldly patterned and vividly colored wallpapers, fabrics, and accessories.

More from Yeoward’s Home and Garden

On a striped tole table, William Yeoward keeps an arrangement of lilacs, cow parsley, and lime-green apples low and long to keep the conversation flowing.

For an elegant family luncheon, Yeoward arranged garden flowers in an antique tureen.

“I can’t be without comfort, warmth, light, and flowers,” says William Yeoward, as illustrated here in the drawing room of his country house in Gloucestershire.

A casual picnic gathering in Yeoward's garden meadow includes a colorful selection of fabrics and crystal.

Eventually, Yeoward struck out to hang his own shingle on King’s Road (though he and Guild remain dear friends, and he now designs a fabric collection distributed by her company). He stocked his shop with antiques and chipped plates and crystal goblets from the Regency and Georgian periods, which ultimately took his product design sensibilities down a parallel path. For it was another chance meeting—this time with Timothy Jenkins, who was at the helm of his family’s crystal business and perusing Yeoward’s one-offs in the store—that led to a collaboration on a glassware collection inspired by pieces from the 18th and 19th centuries that they found relevant for today’s use. In the years since, William Yeoward Crystal has expanded to include china, silver, and linens—basically everything on the table except dinner.

Yeoward is, without a doubt, an unabashed bon vivant. Always the life of the party, he loves nothing better than to throw one and is a master at setting a tableau that manages to be both beautiful and often more than a tad amusing. “I like lots of friends about me and to have a good time,” he says. “The chairs have to be comfortable, the glassware gorgeous, the flowers appropriate and lovely, and the people not dull.” Look no further than to the books he has written on entertaining to see proof positive of his philosophy.

Flowers are most certainly an everyday part of his life and a major stimulus for his design work, beyond the obvious, such as the strikingly beautiful vases in his crystal collection or a stylized velvet rose motif firmly planted on one of his graphic fabrics. “My influences are rarely literal, but I’ll be back in the studio and remember that really interesting crocus that poked its head through recently, whose color looked like a dirty lime. And inevitably that shade will find its way into one of my fabrics or china patterns. It’s all really organic. If it’s not a flower that speaks to me, it’s a leaf, a berry, a stalk, or a twig.”

Yeoward finds inspiration plentiful in his own garden, where you’ll usually find him puttering about on weekends—working, transplanting, and experimenting with color combinations. “I inherited nothing in this garden when I bought the house. It was a blank slate and had to be made from scratch,” he says. “It’s been fun to watch it grow and change, and I’m constantly pulling out the things that don’t work.” In summer, his garden is an explosion of amethysts, pinks, blues, and grays, and as you might predict, those same hues populate many of his product designs. 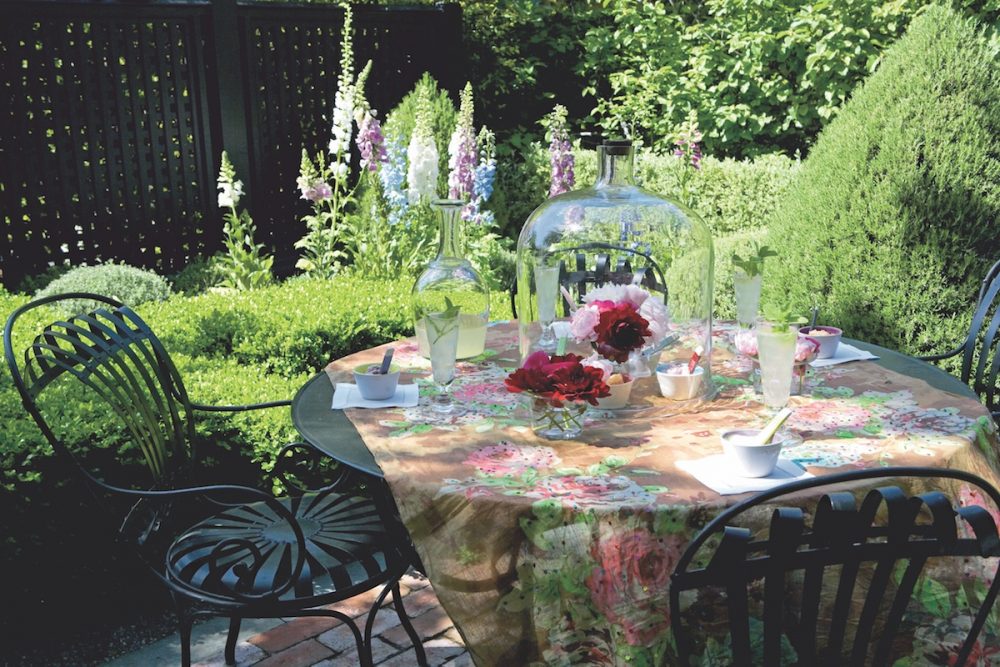 At the end of the day, when Yeoward finally winds down, his favorite spot is wherever he happens to be in the garden at the time or “wherever,” he says with a mischievous tone, “the cocktails are.” But without question, he’ll be surrounded by something in bloom. “I think flowers are universally adored because they never say nasty things to people,” he says. “They’re calming. And they’re not forever. They must be enjoyed in their abundance, in their time, and then they’re gone. Like a proper guest, I suppose. Who doesn’t love something of joy and luxury? It’s the very essence of human nature.”

William Yeoward’s empire extends beyond the tabletop and onto the coffee table, with gorgeous books that provide an in-depth look at his philosophy. “All design is an opinion,” he says, “and these books reflect mine.”

William Yeoward: Blue and White and Other Stories: A Personal Journey Through Colour (CICO Books, 2017)
Buy the Book